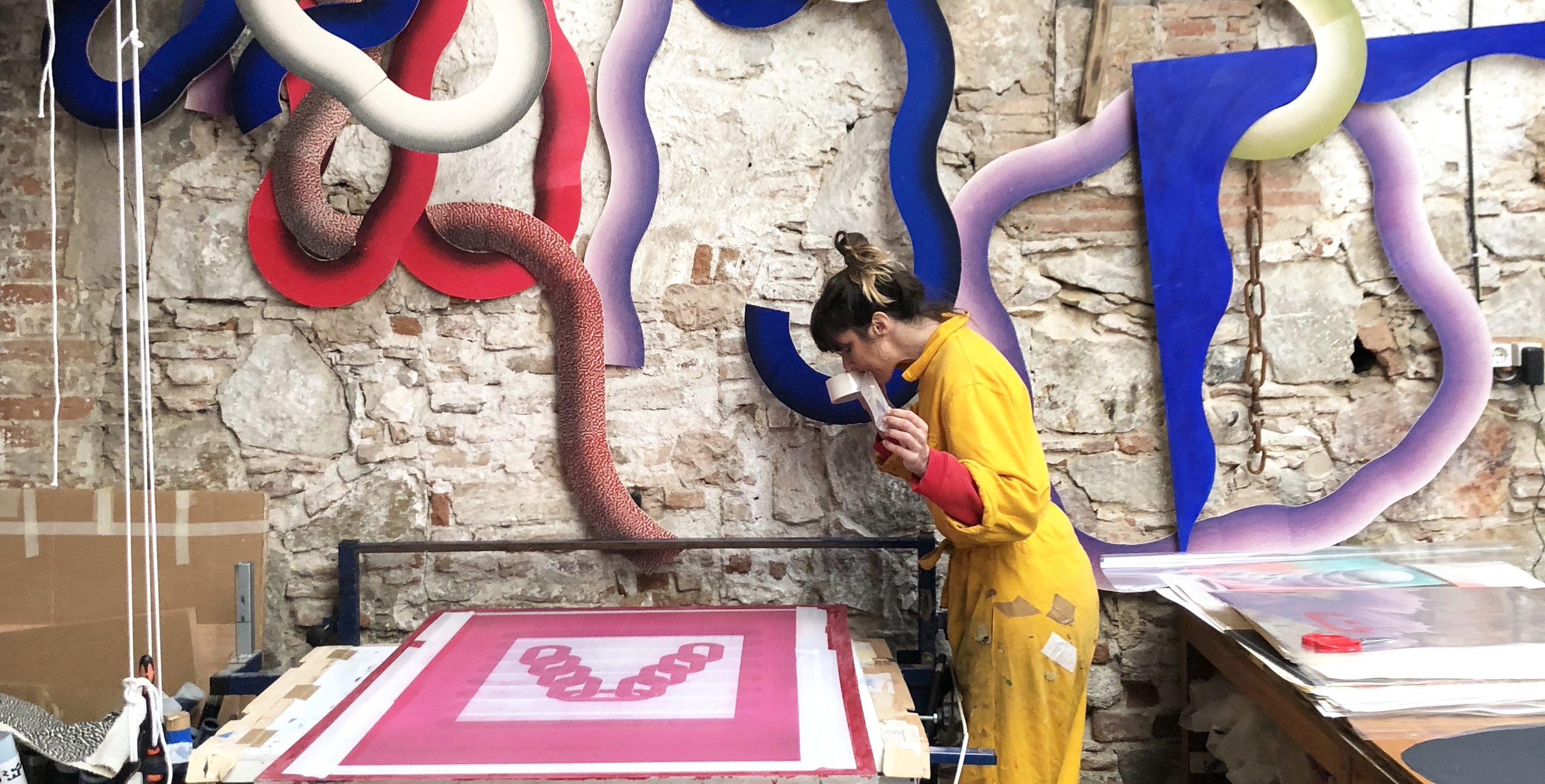 Artists Dunja Jankovic (Croatia, 1980) and Boris Hoppek (Germany, 1970) have built up their headquarters in the heart of Poble Nou, in Barcelona, more than two years ago. After living for a few years in the Island of Lošinj, were she’s originally from, they spent a few months travelling through Spain in Boris’s van before settling down in Barcelona, where he had already lived for a few years. «Were we used to live in Croatia was a real paradise, we had our studio in a former sardine factory right by the sea and we would go surfing every now and then. Now we also have the beach 7 minutes walking distance», says Dunja, «we use to go there all the time when the weather is nice… It’s a shame we can’t go now!», she continues.

Boris is now working on some wooden installations for a collective show he will soon have in Hamburg, on a videoclip for a Spanish music band and on one of his huge inflatables figures. While Dunja has just finished her last collage and screen-print series she got started with right before the quarantine, ‘Black Holes’, and is now starting to give shape to a new photography book. Soon she has her next solo show in Barcelona at Arte Aurora gallery where she will present her latest work on ‘wereable sculptures’ and which will be probably having its opening moved to June. «These days are being quite productive for both of us. The truth is that nothing has changed much for us since this is the place we live and work, but after these past crazy months of non-stop work is now when we feel that we can really put some dedication to what we love instead of being machines to its maximum productivity».

We sneek into their luminous home studio thanks to their personal pictures shared with us to get to know a bit more about them and their upcoming work. 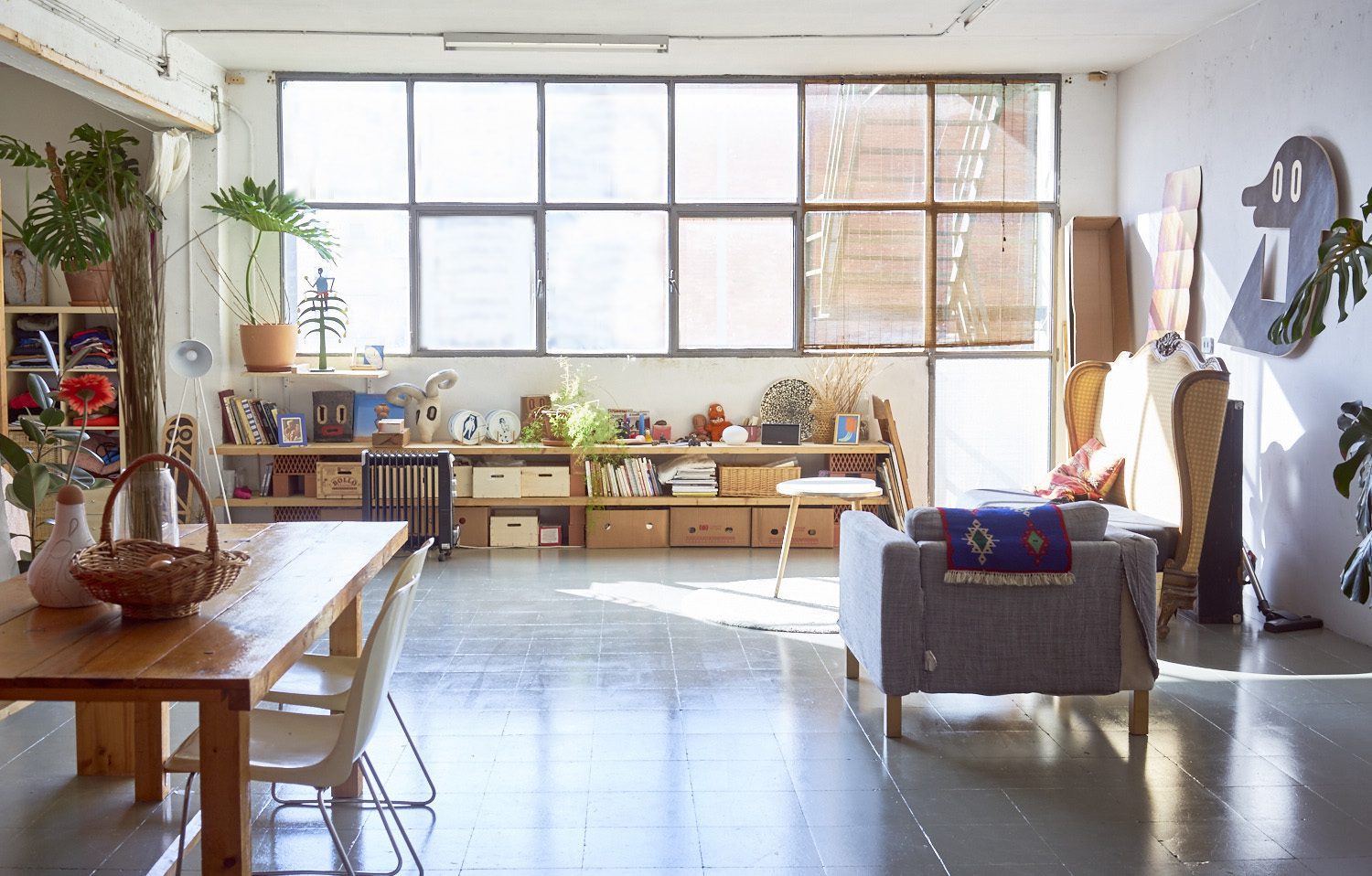 «Boris and I we live and work in this space», says Dunja. «Here is were we do all the small work as drawing, collaging, paper cutting… Also computer work. Normally the craftwork that isn’t as dirty as screen-printing is. This picture was taken in an extraordinary situation, it never looks as clean as this, normally this is a mess!», says laughing. «We are two people working constantly on so many things that we don’t even get to see the floor of our home, it’s always covered. Boris right now has a lot of wood that he’s cutting and I have paper all around. More than an apartment it’s mostly a working space where we sleep and cook!», she says. 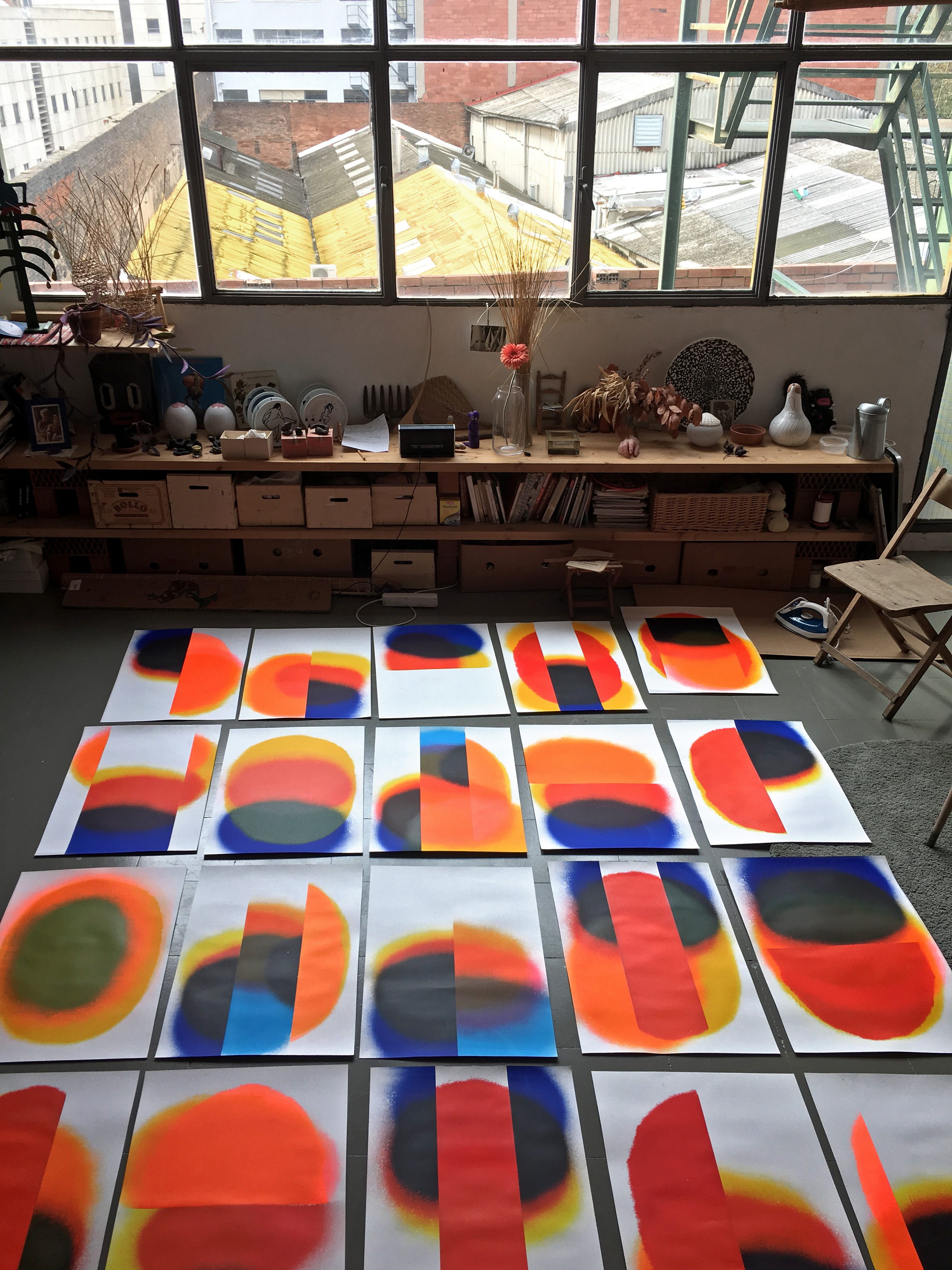 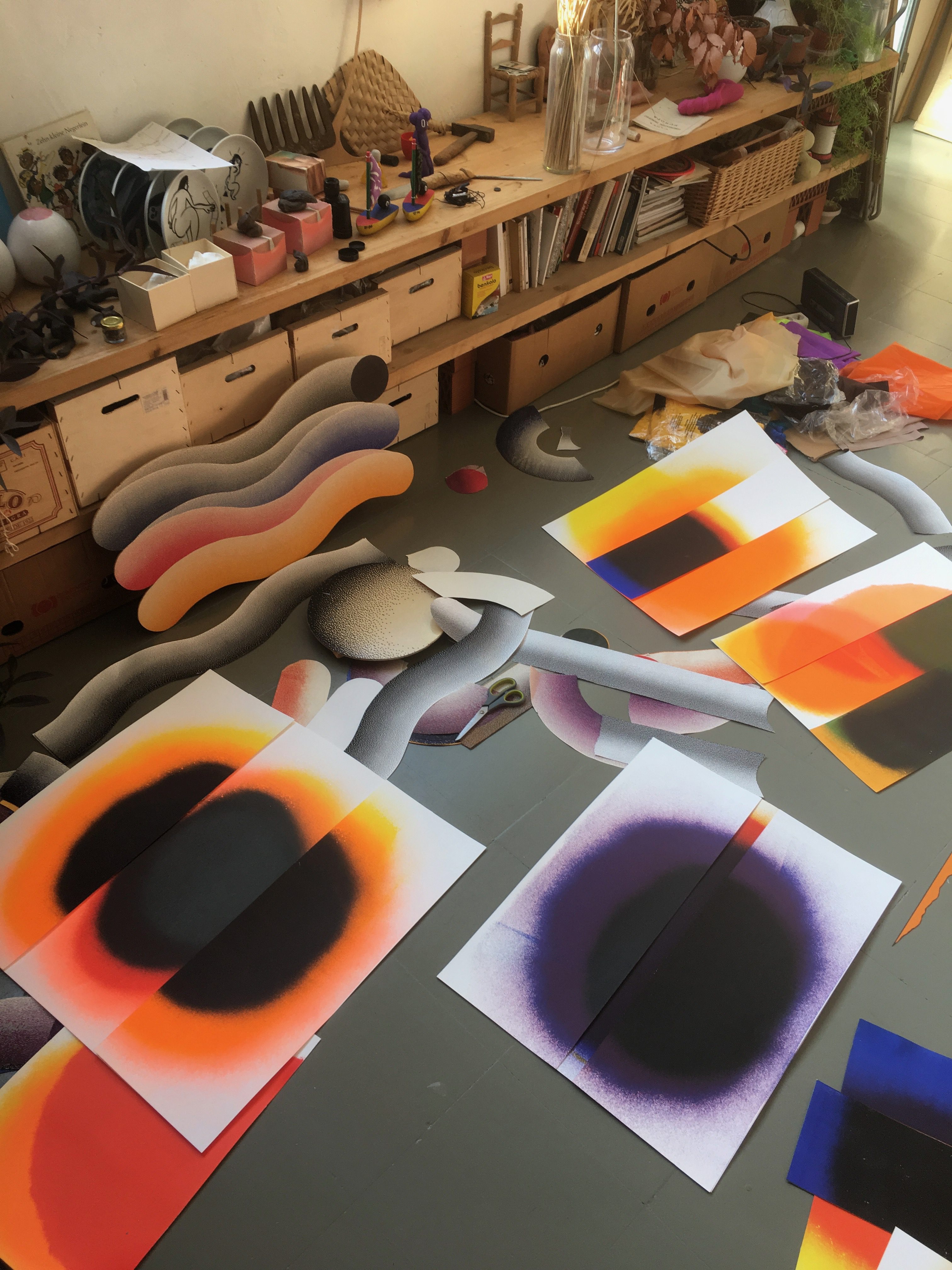 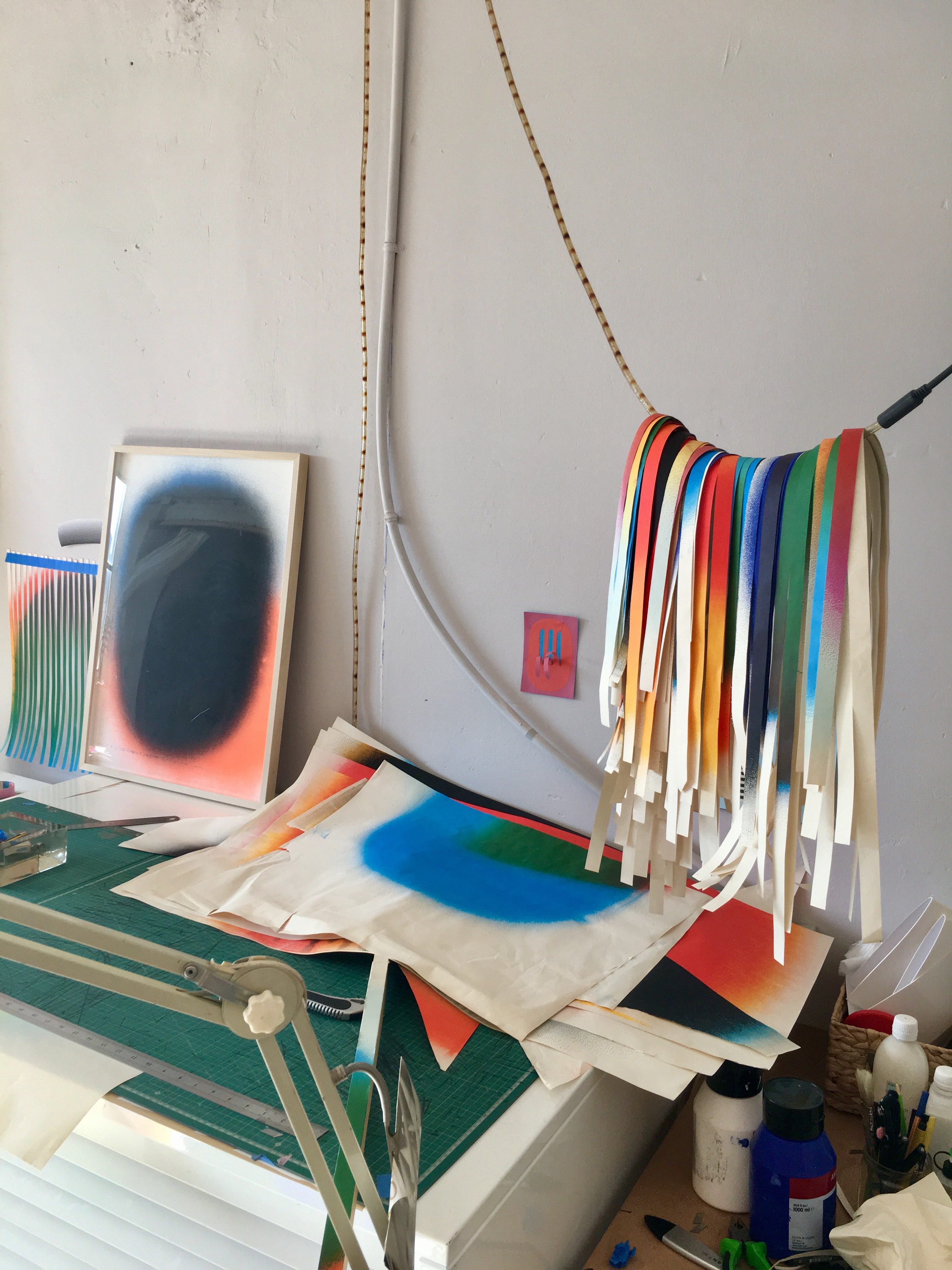 «This is the latest series I’ve been working on, it’s called ‘Black Holes’. The picture on the left is actually the first prototype serie from which I then developed the rest» she continues. It now makes sense when she says they don’t normally get to see the floor of their apartment. «I first did the screen-printing, and it’s during this process when I get to experiment with colors and layers. I cutout some of the prints into strips and then what I do is change the directions of the strips or I directly cut the prints by hand and mix and match in between them. I try to make new compositions all the time. It’s basically collage work based on screen-printing», says Dunja. 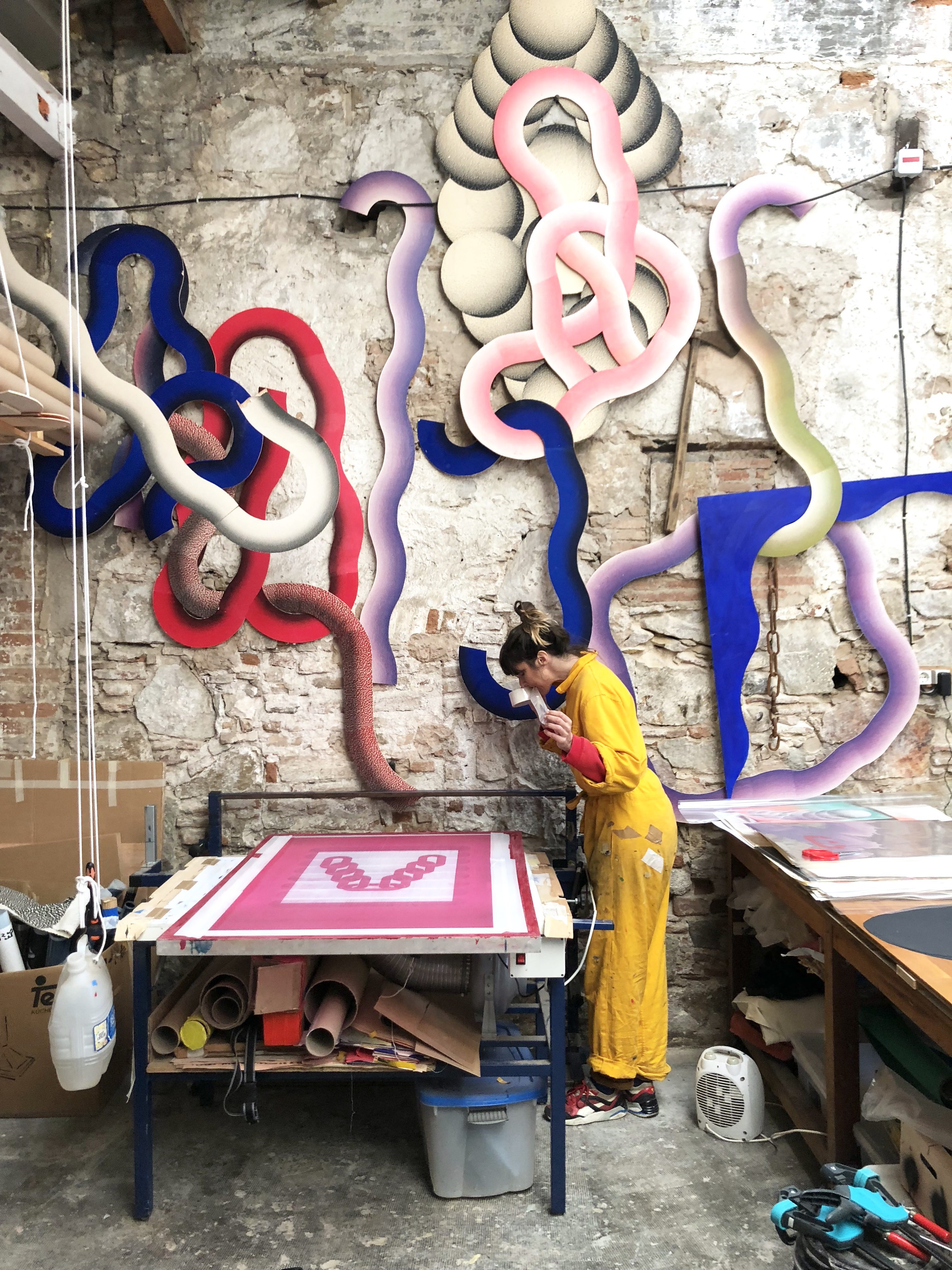 «This is the screen printing studio that we have and where we go for the dirty work. There’s pieces of compositions I used for other exhibitions or installations hanging everywhere just as a storage», she says about the colourful strings hanging in the walls. «Here I was preparing a screen for an exhibition Boris had. We always work for each other as assistants, we don’t actually collaborate in many projects together. The closest to collaborating is when he does his erotic pictures and he uses my installations as props for the models to play with. He makes a lots of shootings in our apartment so we have quite a few», says Dunja. 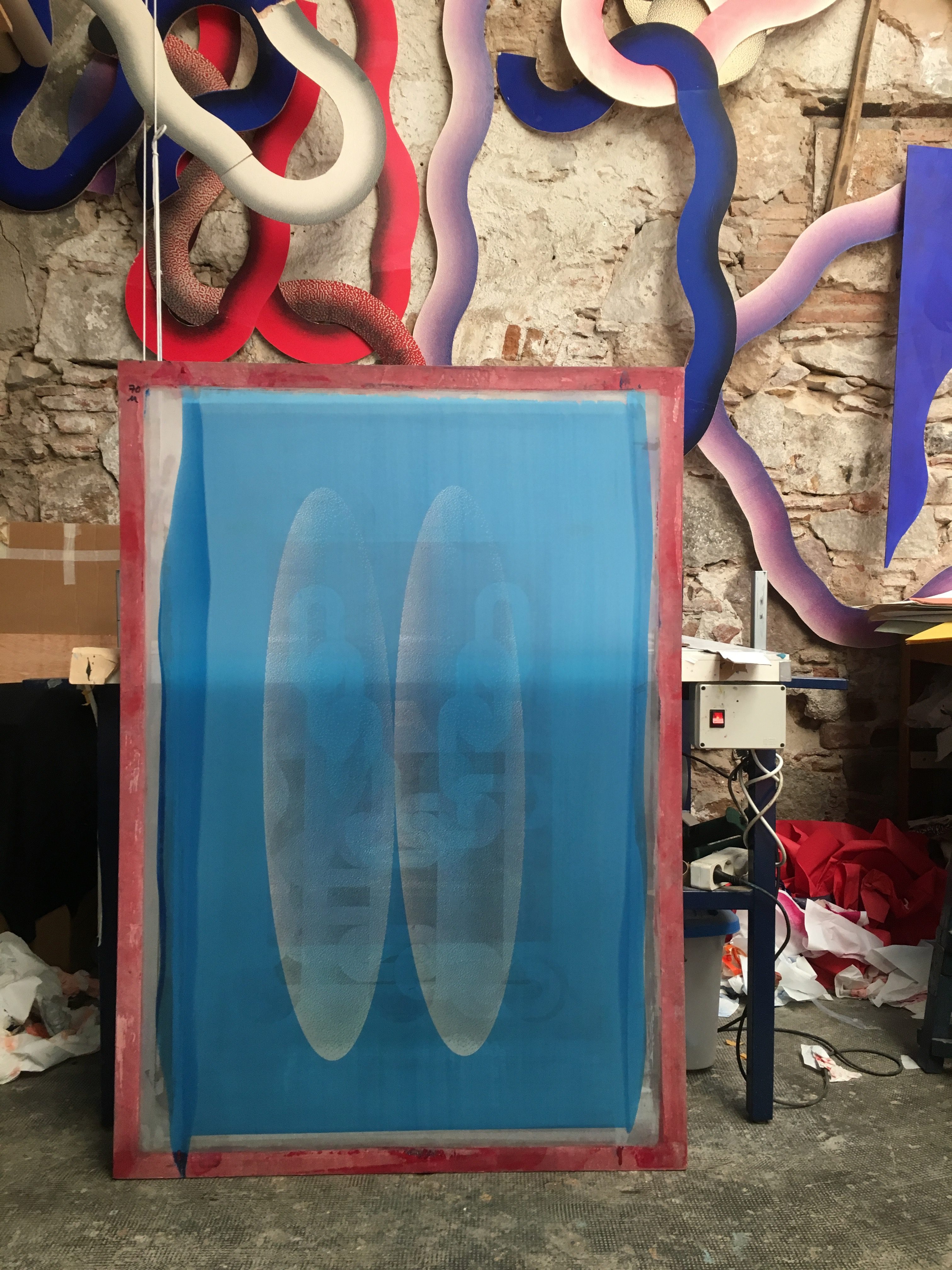 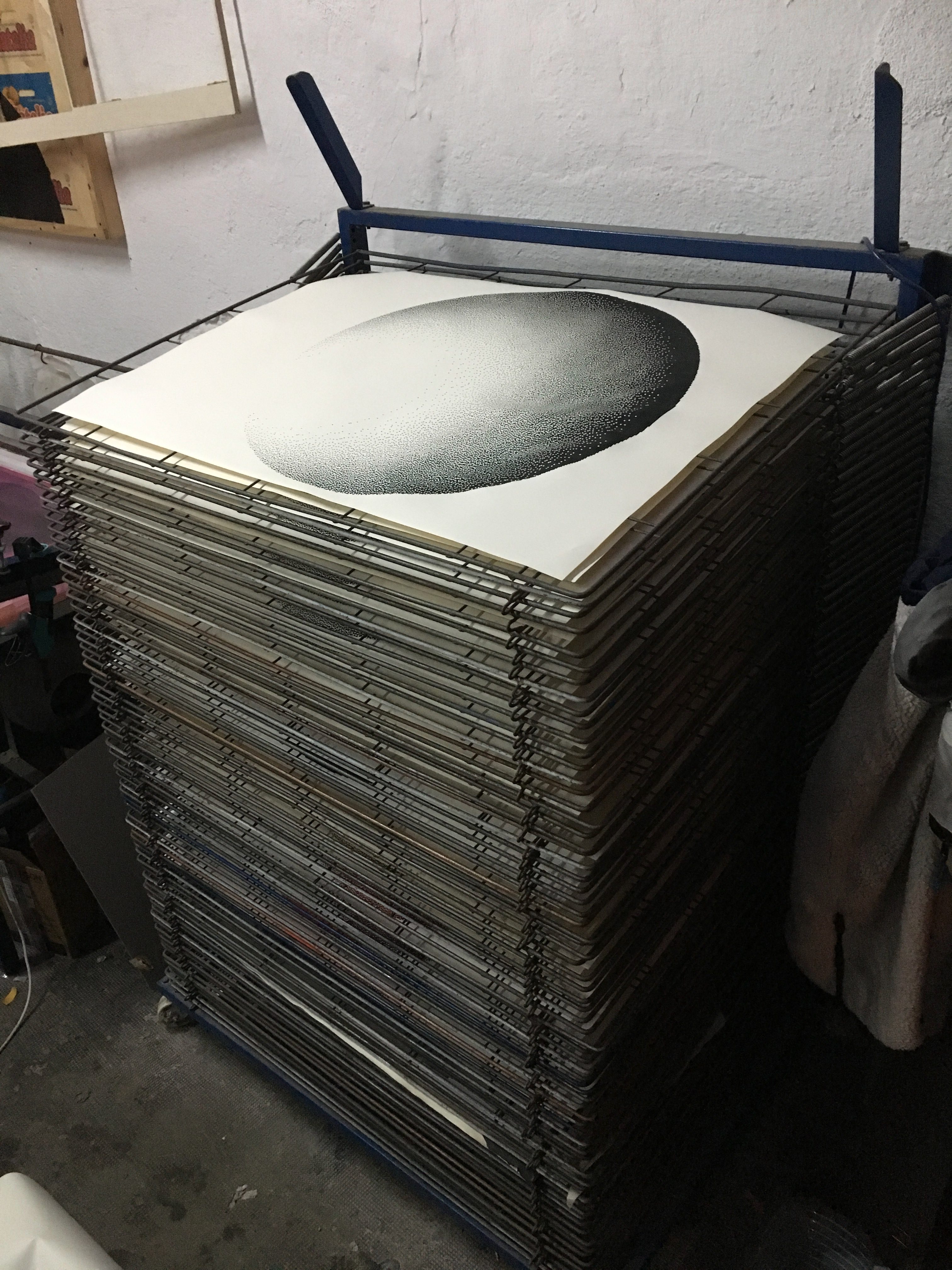 «The image on the left it’s actually the screen of the ovals for one the sculptures I did this year for the Urvanity public art program», says Dunja about her participation this year on the Installations Program for Urvanity Art 2020 with three sculptures located in Plaza de San Ildefonso in Malasaña during the Art Week. «I basically do the shapes of the images with screen-printing techniques, then I cut them and glue them on wood to then give shape to the whole installation. On the drying rack, I have some prints drying of other of the sculptures I did for Urvanity too, The Dominant was called», continues Dunja. 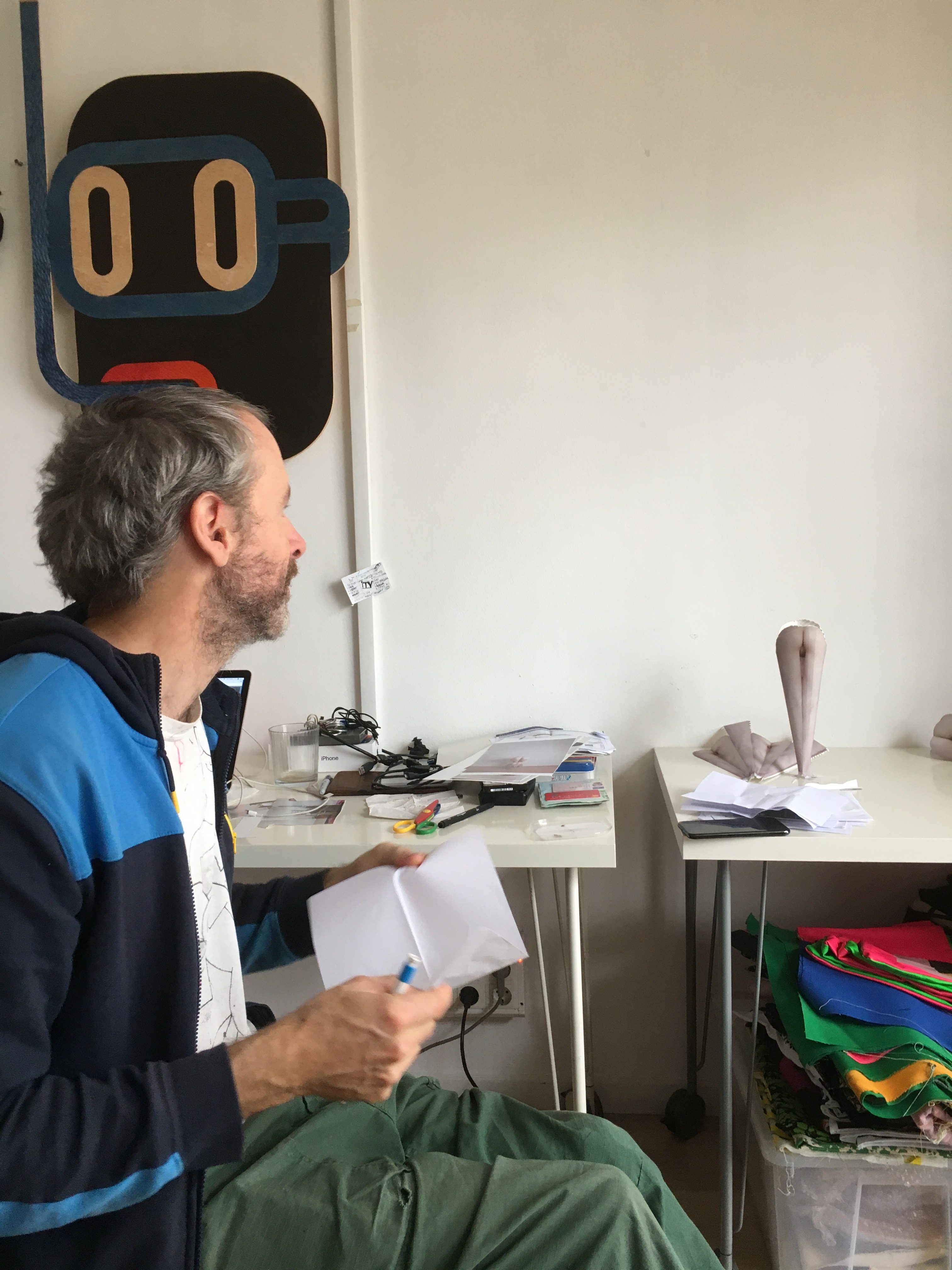 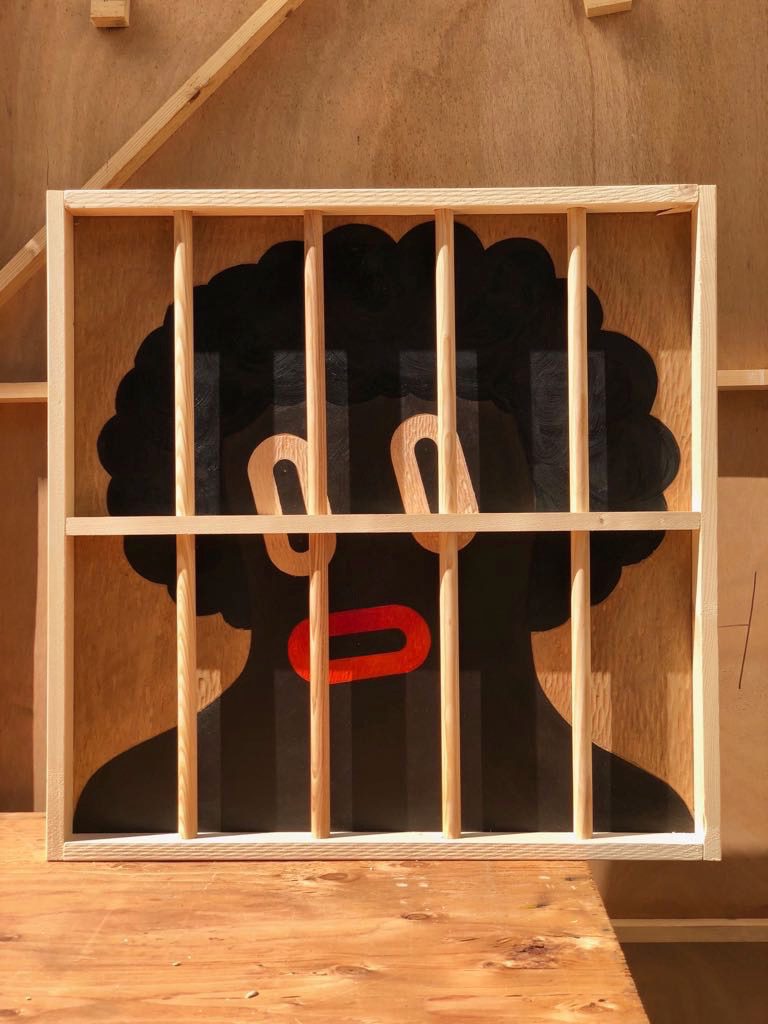 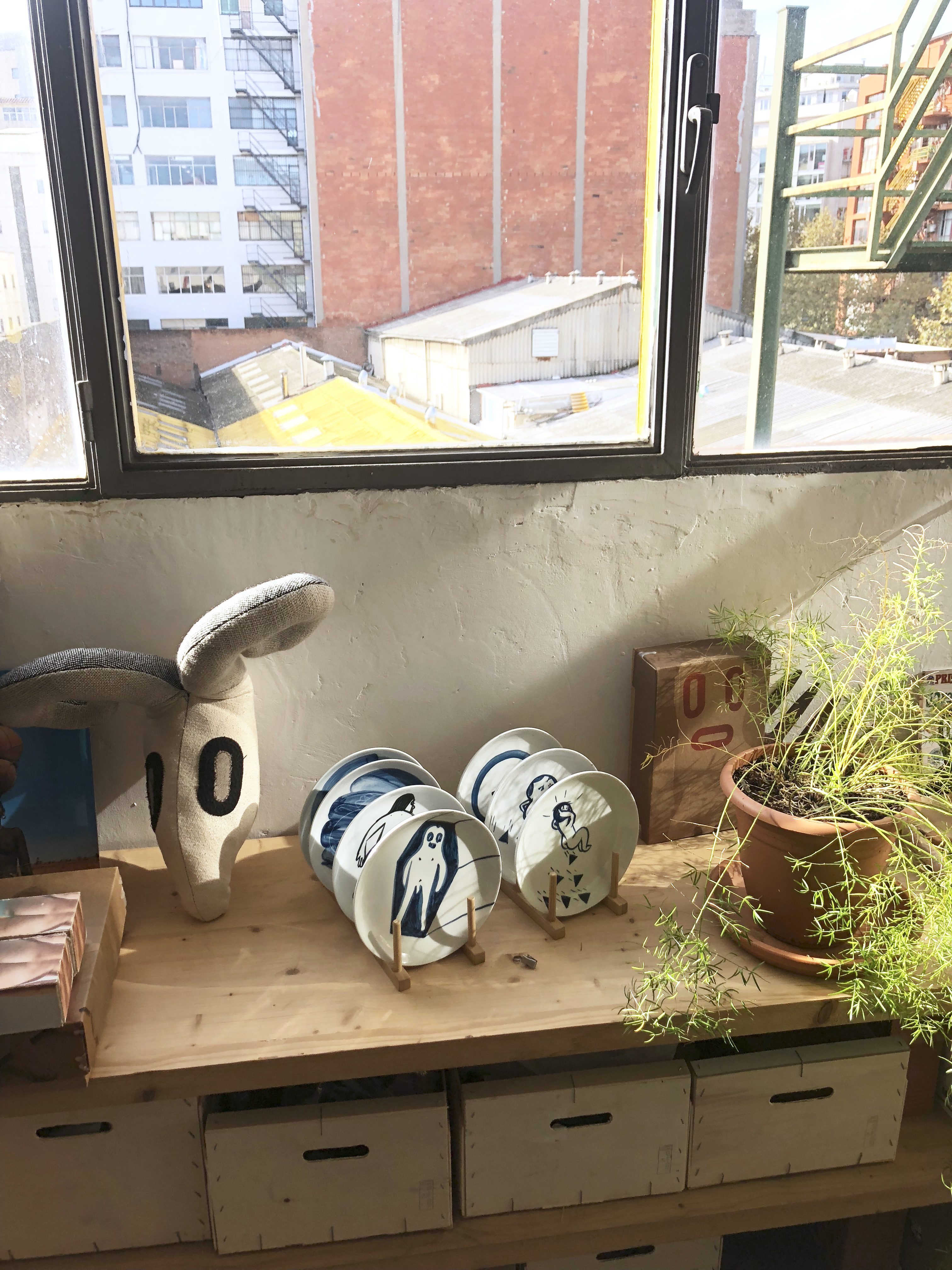 «This are some of the Boris’s works we have around at home. Both The Diver behind him and the person behind bars in the second picture were made for this big exhibition he had at Delimbo Gallery in Sevilla. It was about racism and immigration in Europe. His approach on how to talk about the subject is through this provocative pieces from which he wants to make people react and think about it in a different way», says about the exhibition celebrated back in October 2017. «To the right there’s some porcelain work Boris did in China. He traveled for a month to this little town were they were all specialized in porcelain. He did that tableware and some other funny ‘poop’ figures using their traditional techniques. It was about making something ridiculous out of one of the most valuable materials», she laughs. «Also the the puppet head next to the plates, he made a whole line of clothes, dolls and playfull things with the Chinese fashion company ZucZug».