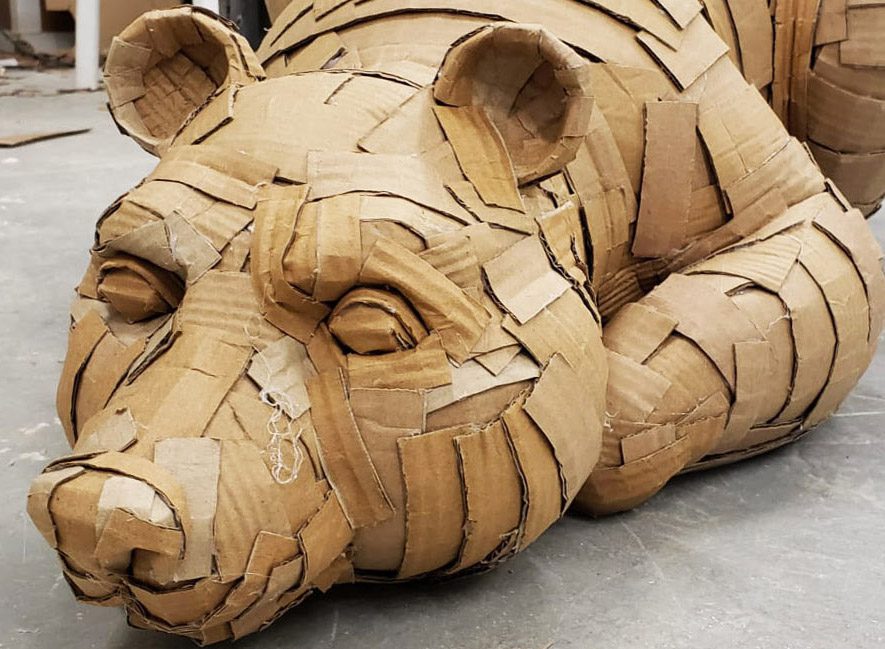 Canadian artist Laurence Vallières (Québec City, 1986) is known for the creation of large-scale sculptures using recycled cardboard that she collects from the street wherever she travels. Gorillas, bears, rhinos, and elephants through which she explores human relationships, communication and digs into other political issues such as consumerism through a sustainable work and an environmental self-awareness.

Just a couple of months ago, she traveled to Spain for a two-week residency in Madrid participating in Urvanity Art’s public installation program alongside with Swinton Gallery to create a massive 6-meter long cardboard triceratops being eaten by a bloodthirsty Mickey Mouse in the grounds of the fair’s location.

She opens up the doors of her studio in an Instagram Live conversation to show us her creative process, what is she working on and some finished pieces. Check out the whole Live video clicking here. 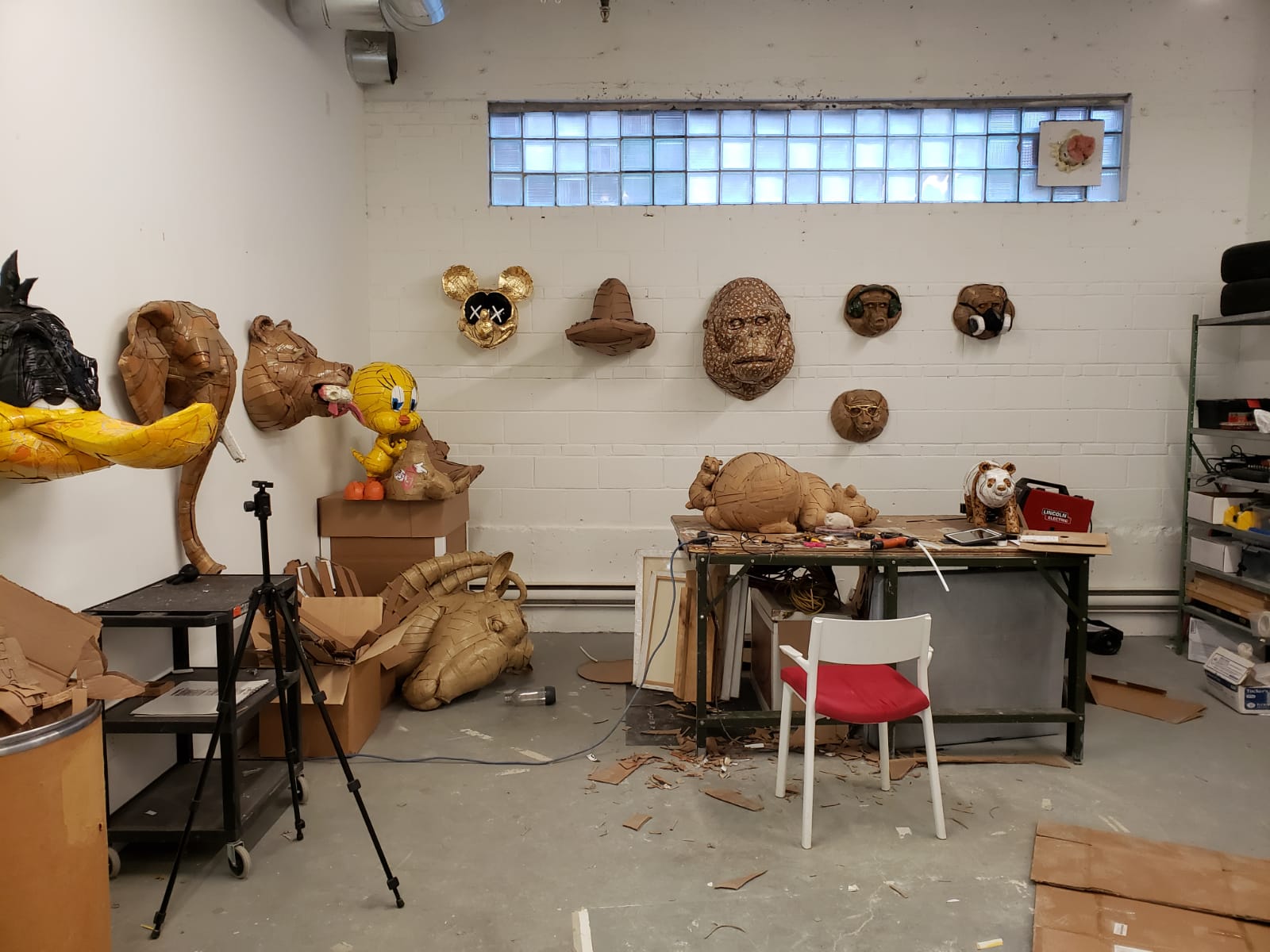 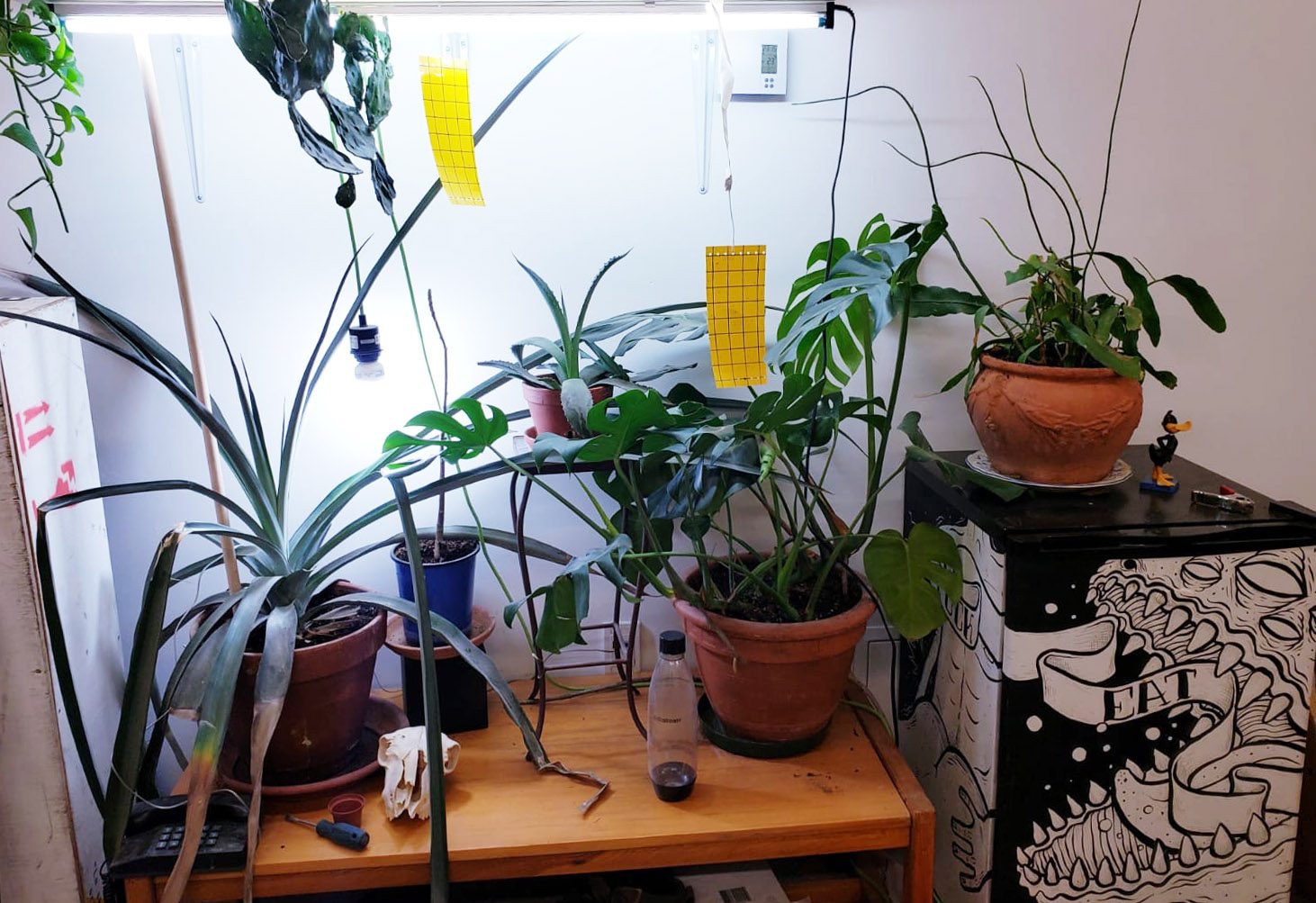 «My studio is pretty much like a white rectangle that I’ve been filling up. I have pretty much room but I don’t have windows… You have to choose your battles, you know? It was too expensive to have windows», she says laughing. «But you know what? It’s so cold and rainy in Montreal… that whatever! So I did this little plant set up with a light bulb. I’m a plant freak, that’s what I love the most and I have a lot. There’s a little baobab that my brother brought from Senegal», she continues. «My studio is really close from where I live, I go by bike when the weather allows it. It’s a 5-10 minute ride. Before I used to have my studio really far, it was in the back of a manufacturer so it was big but dusty, too cold or too hot… but free! So when you have something free you say thank you and you take it! Now I moved closer to my house so that’s a relief». 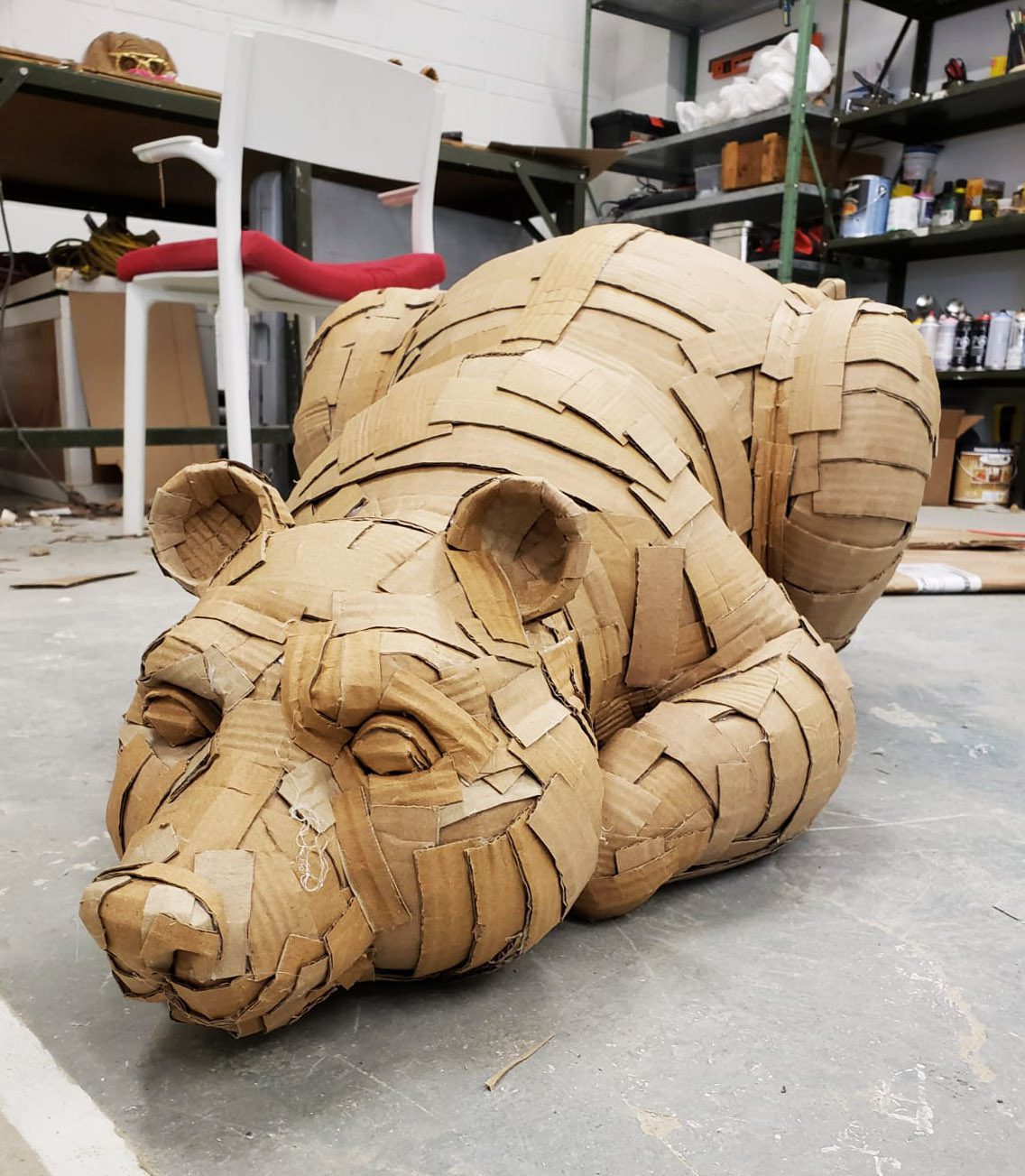 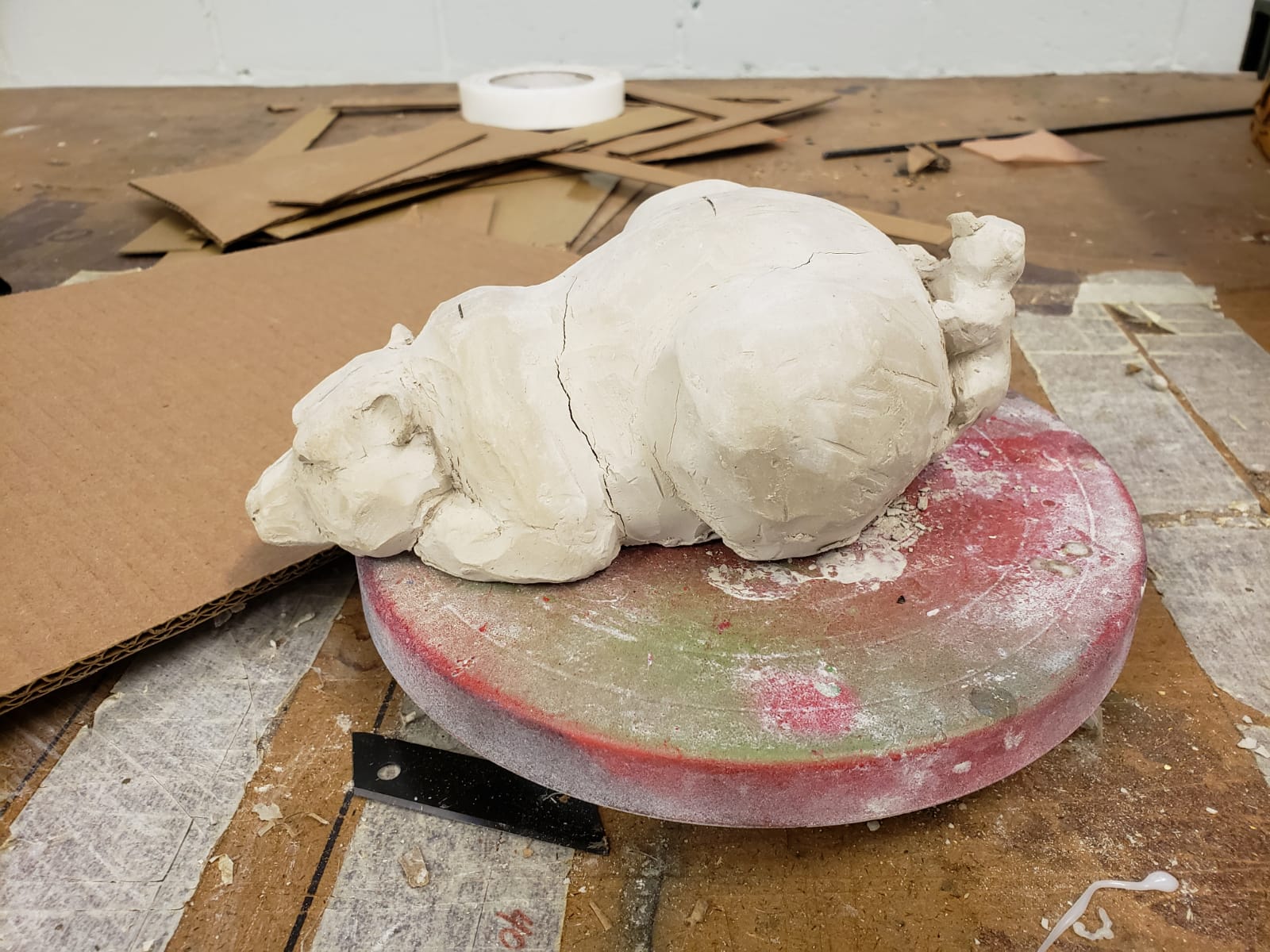 «I tend to have like about ten projects going at the same time so there’s a lot going on. Maybe there’s only two pieces that are finished in my studio. Right now I’m working on this bear with the baby. It’s a good example to see how I work: first I make my sculptures on clay and that’s exactly what I reproduce after with cardboard, but bigger». 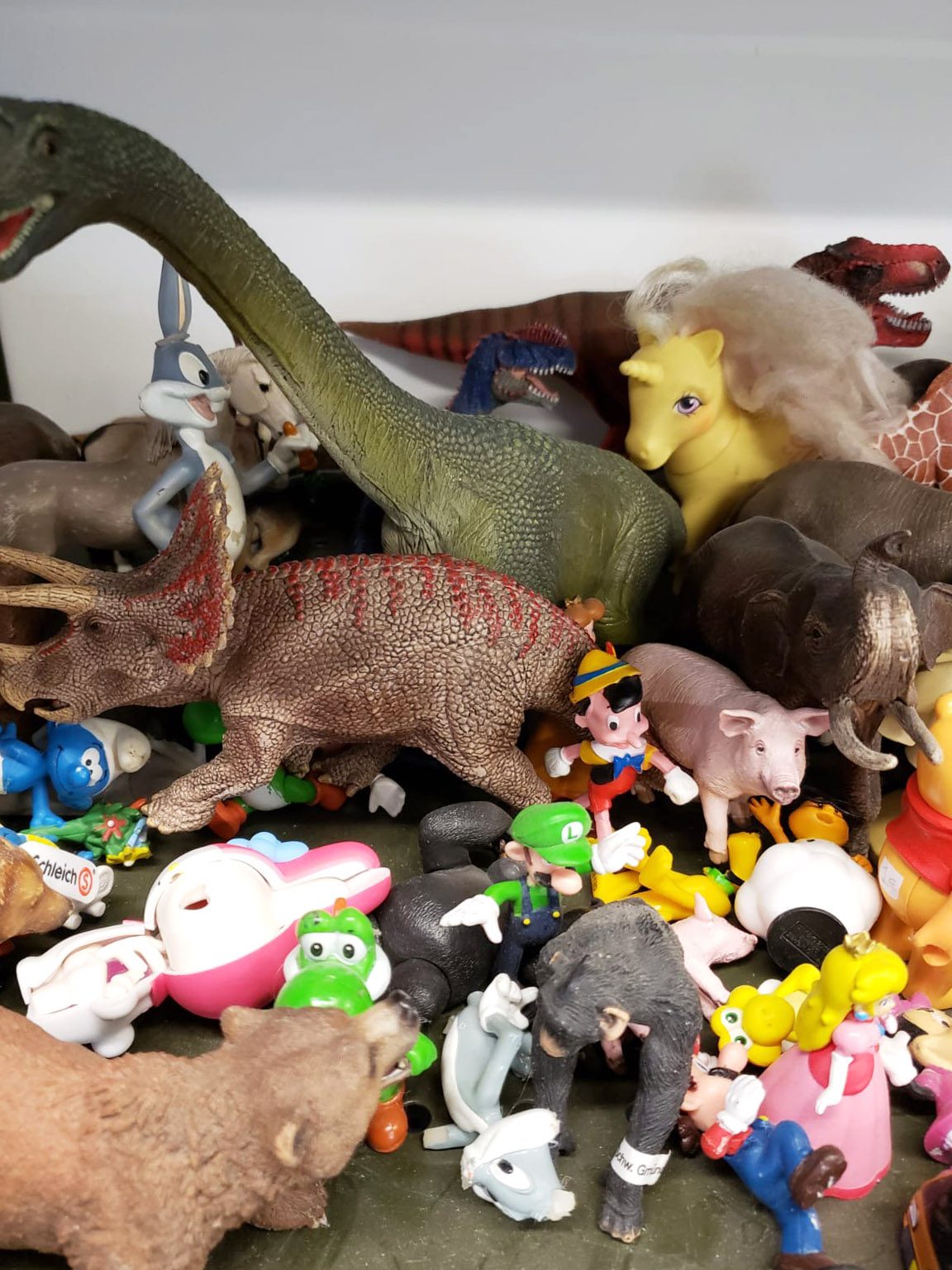 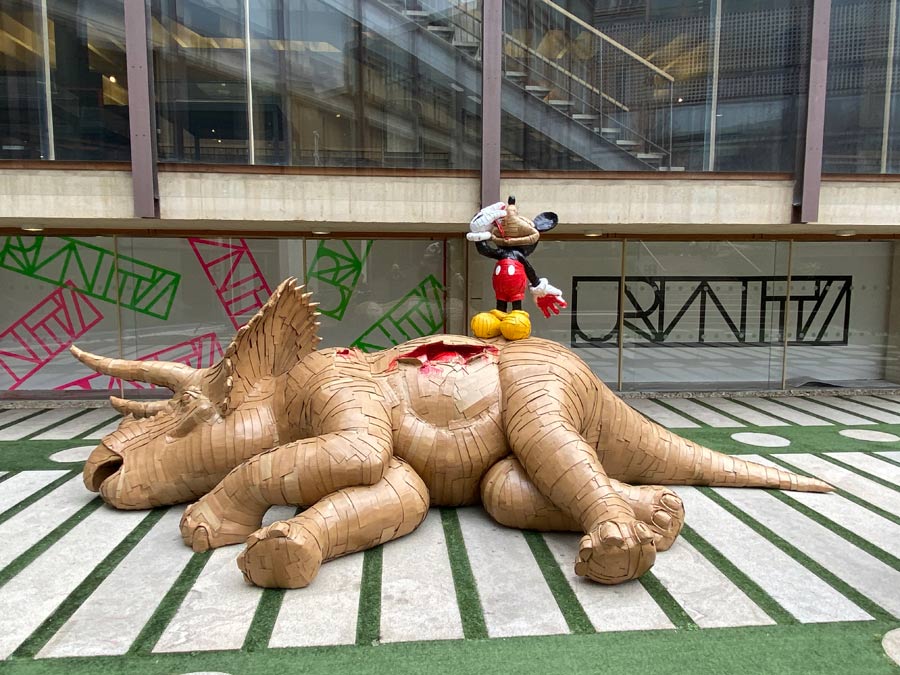 «When I go abroad sometimes it’s a little harder because I don’t have the time to fire the clay so the figures are too brutal. What I do is that I take these toys with me. They are my muses and I reproduce them. The triceratops was the one I took to Madrid last February. Once you have the measurements you can do whatever you want with them, put them standing, lying on the floor… the scale doesn’t change. My next sculpture will probably be the Pinocchio hiding in the first picture. And can’t wait to do Scrooge McDuck. They all are my folk, I get inspired by them». 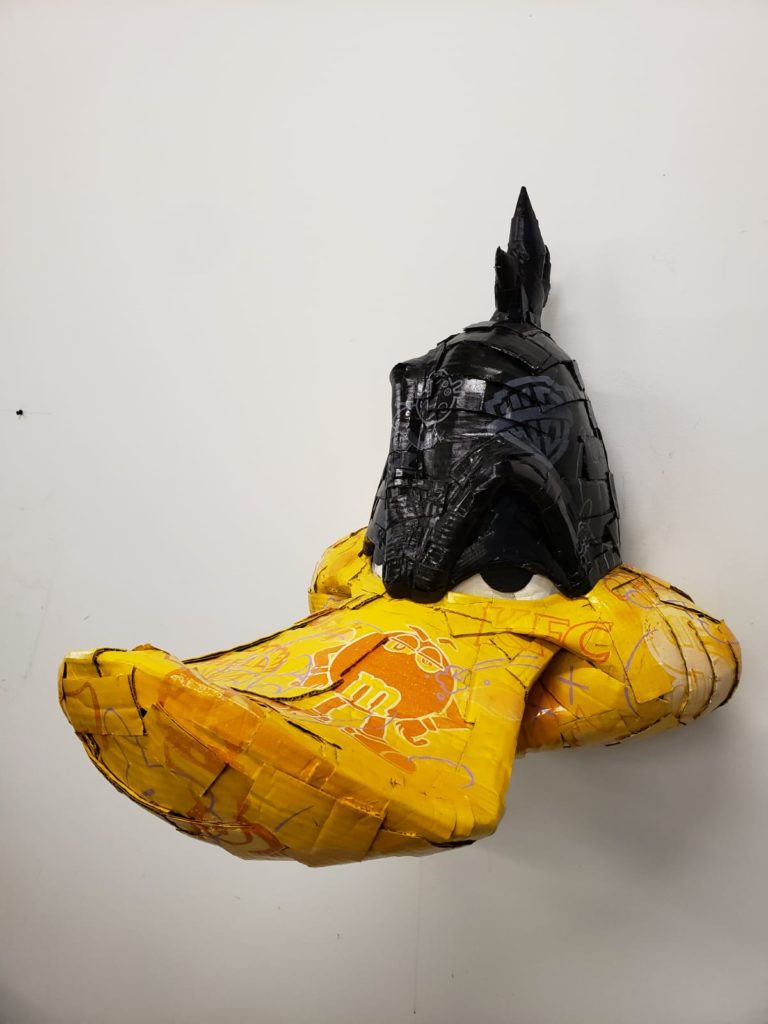 «Now I’m trying to draw on the sculptures. This is Daffy Duck with his usual smug face. I painted on his peak and over his face. It took me weeks, it’s tough! It’s not an easy surface and I wanted to be as clean as possible. I ended up working with acrylic paint and markers». 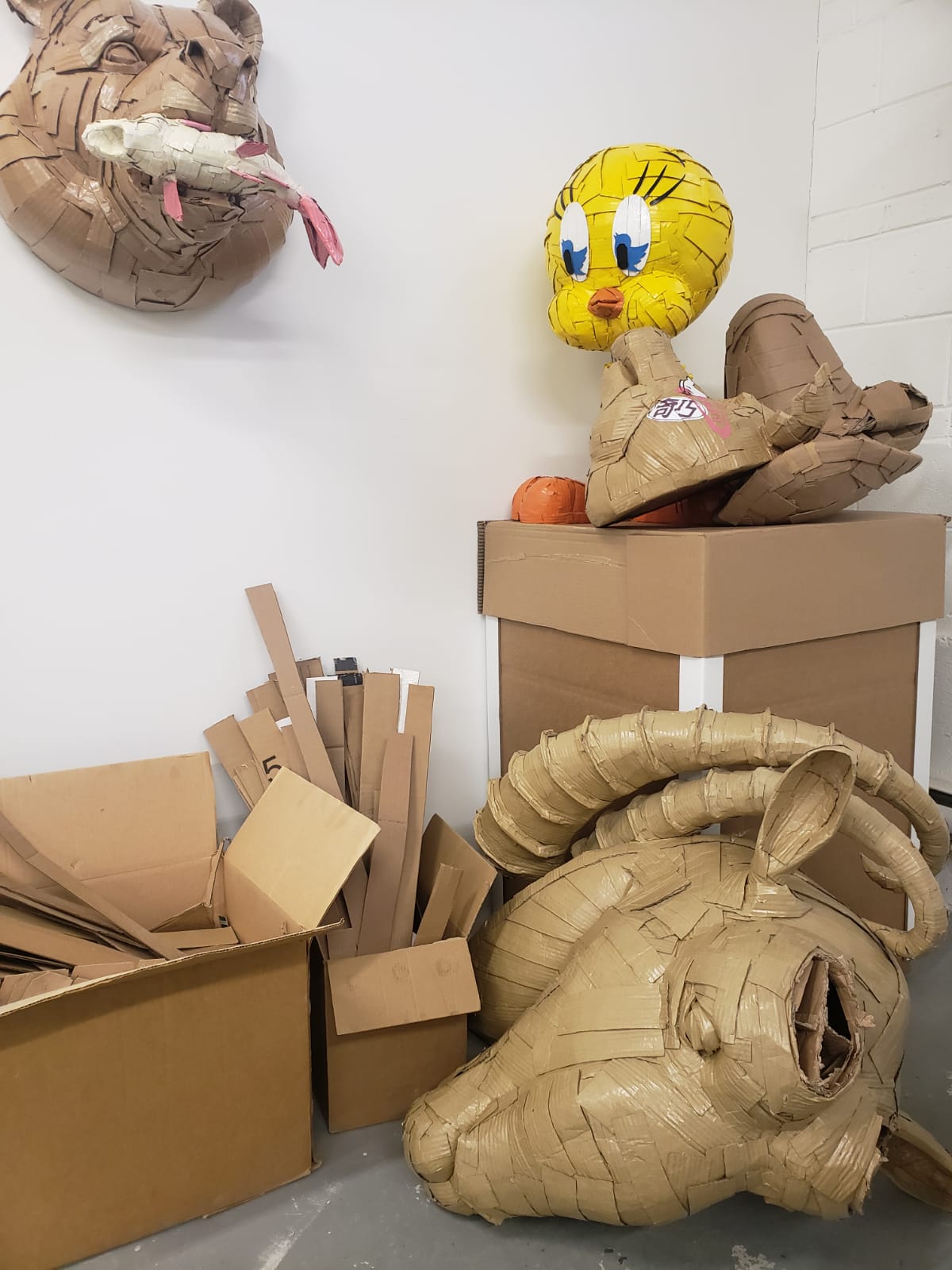 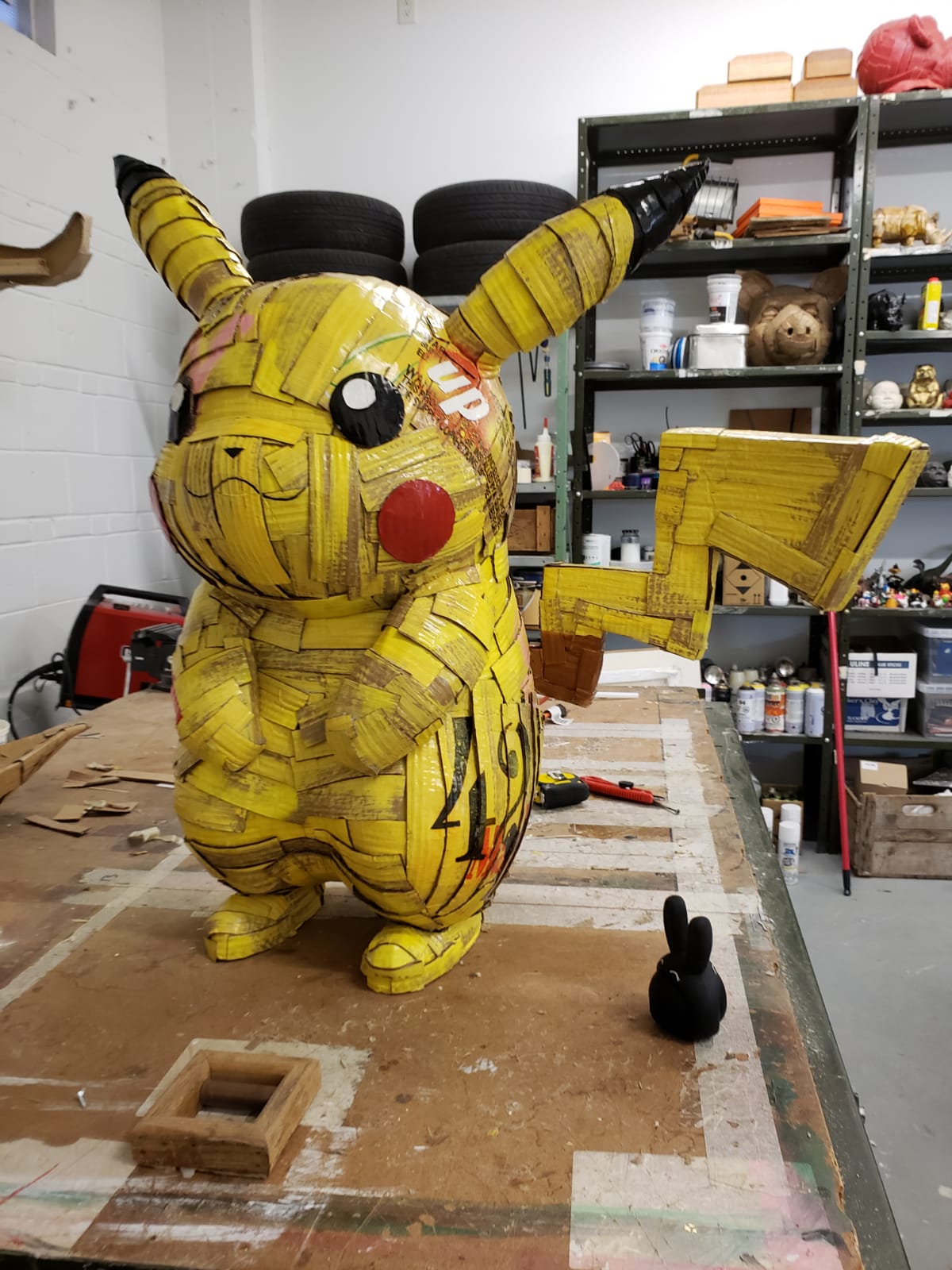 «Tweety is finished but his eyes look a bit weird still so I need to go through it. It’s Tweety Twitter eyes! He’s all cute! This piece is going to Hong Kong and I think I want to make a toy out of it. I started using cartoons after a show I had in South Korea sponsored by Carhartt. They asked me to make a Mickey Mouse, and I did it because I was asked, I wouldn’t have come up with that idea by myself. I realized how South Korea is so Americanized, the beauty ideal, it was a little uncanny. So when I made that Mickey Mouse I used brands in its face, like blinding him with brands. I had some nice cardboard I brought form New York in my suitcaise where there was an American flag. I just continued going with that idea and it became sort of a series. I have the animal work, the guns, I haven’t made in a while and I put them with brands too, and the series of cartoons». 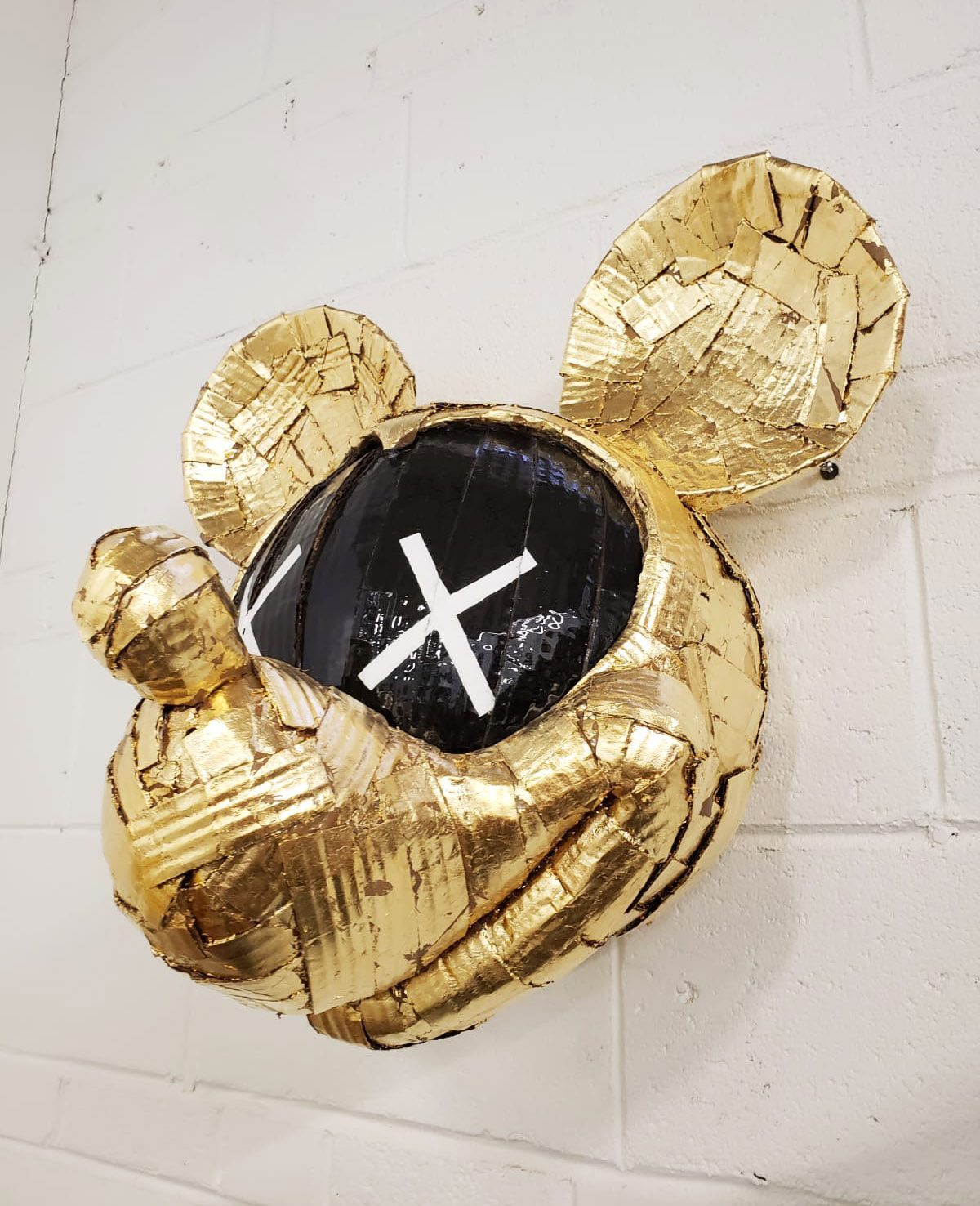 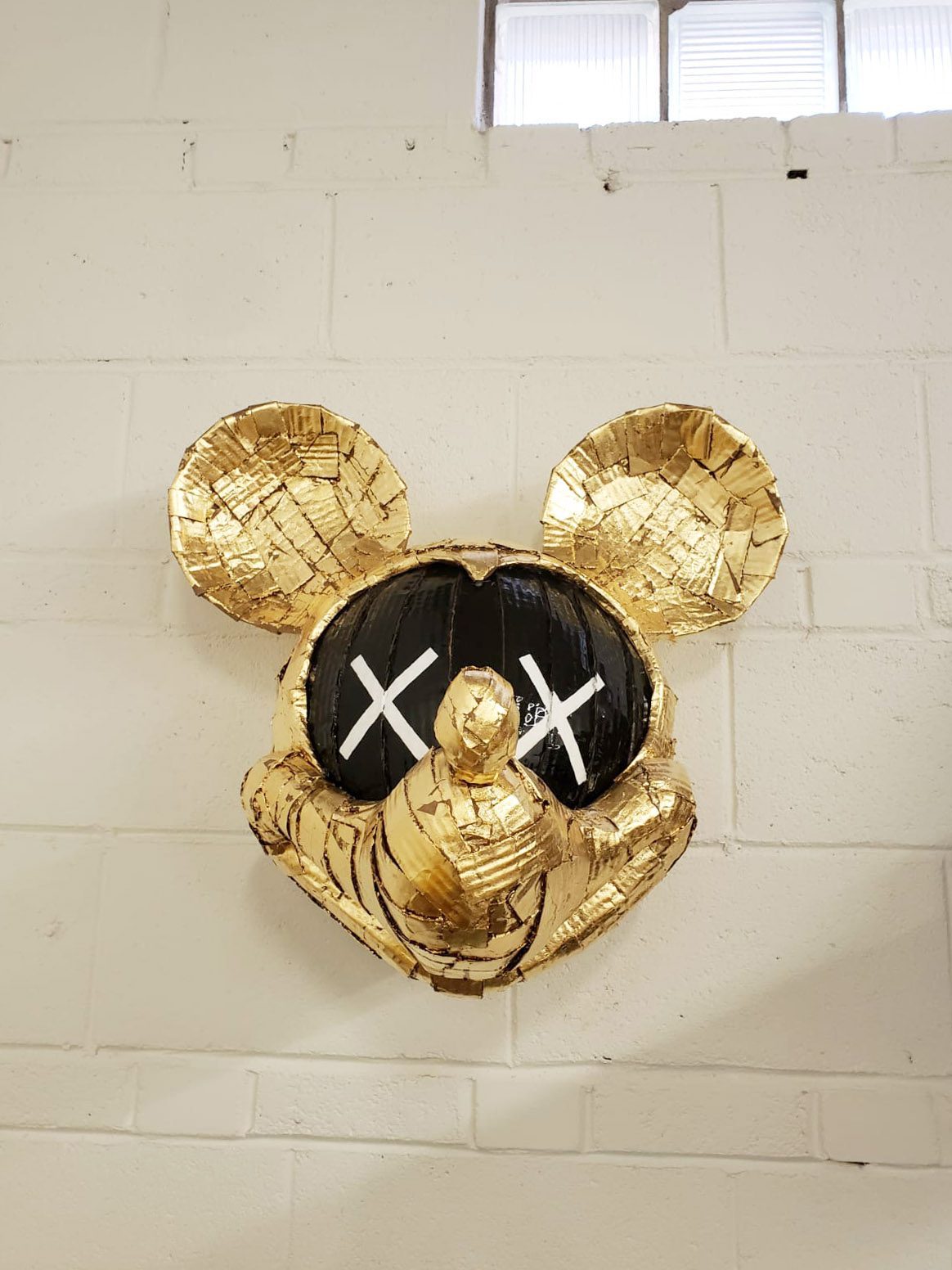 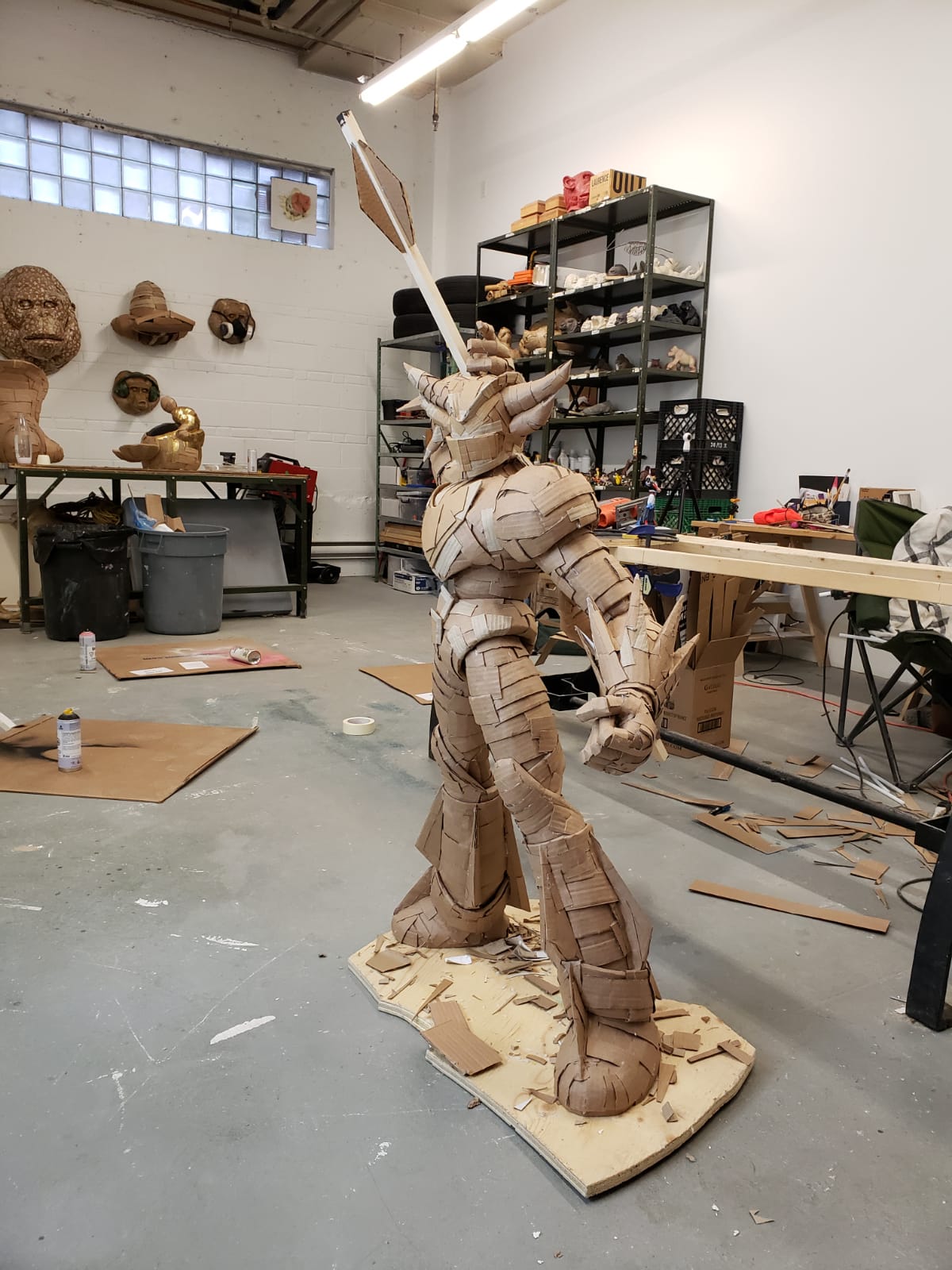 «This gold leaf Mickey was a commission, is already sold. It’s not the first time I work with gold leaf but it takes forever. I actually put a movie on while I did it! Is the best way because gold paint isn’t nice at all, spray paint either… There’s nothing like actual gold leaf. I ordered a bunch of it online, it’s expensive but manageable. It’s actual gold but not the purest, is half way in between, we’re not having a Damien Hirst here! And I like the idea of putting real gold on cardboard, because it doesn’t make any fucking sense! I’ll keep doing it, I like it, it works! On the right there is Grendizer or Mazinger-Z, it’s from an animation from 1975. I tried to watch one episode of that TV show and it’s unwatchable. They scream the whole time! It was supposed to go to Paris for the art fairs that were happening in April. We will see, but eventually everything will reopen, hopefully!».