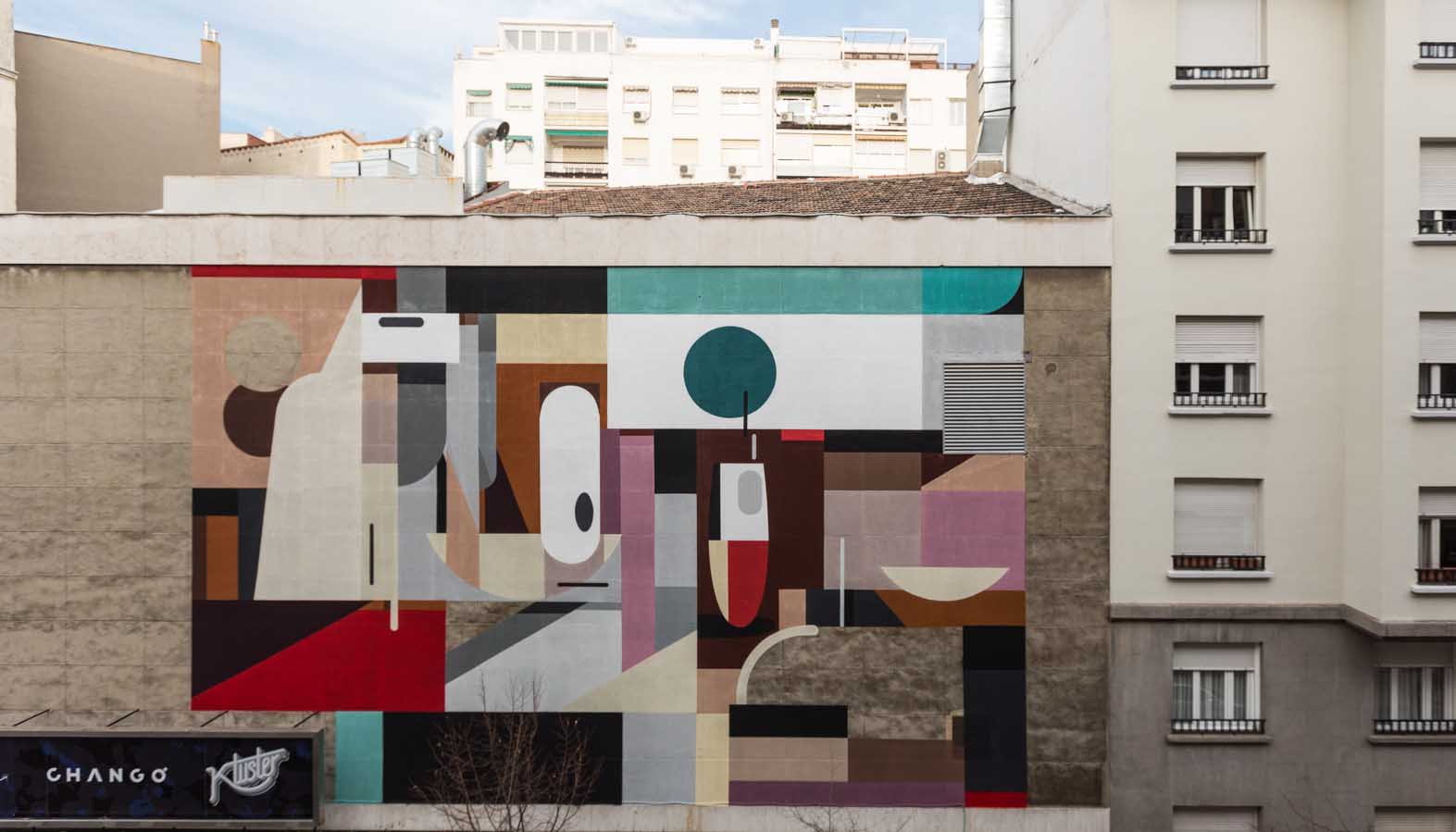 Madrid city walls have their own life. Since 2017, up to 20 national and international artists have visited the capital of Spain to intervene walls of the city center invited by Urvanity Art in collaboration with the City Hall. Streets have merged with geometric and colorful figures, other figurative artworks or the pureness of some gimmicky graffiti letters.

It’s the first and most sincere approach of art to the citizens. An appropriation of the public space for everyone to enjoy through the artistic creation as a medium to express realities, contradictions, a social critique or just as a mere aesthetic expression.

In 2017, the British artists Pref and Ben Eine, the American Jason Woodside, the Spanish artists Manolo Mesa and Mohamed l’Ghacham and the French L’Atlas were the first six to stamp their footprint in the city. In 2018, was the turn for the Czech Jan Kaláb, the Brazilian Cranio, the Russian Alexey Luka and the Austrian-German couple Jana & JS. In 2019, the city bloomed with colorful mural artworks by the Serbian Artez, the Mexican Poni (Hilda Palafox), the Russian Marat Morik and the French PRO176. In 2020 we still had time before the quarantine locked down for the Swiss duo Nevercrew, the British D*Face, the Argentinian Nicolás Romero (Ever), the French Zest (Franck Noto) and the Madrid artist Gviiie to leave their large scale trace in the city.

We guide you through three different walking routes (still virtual!) so you don’t miss any of them. There we go! 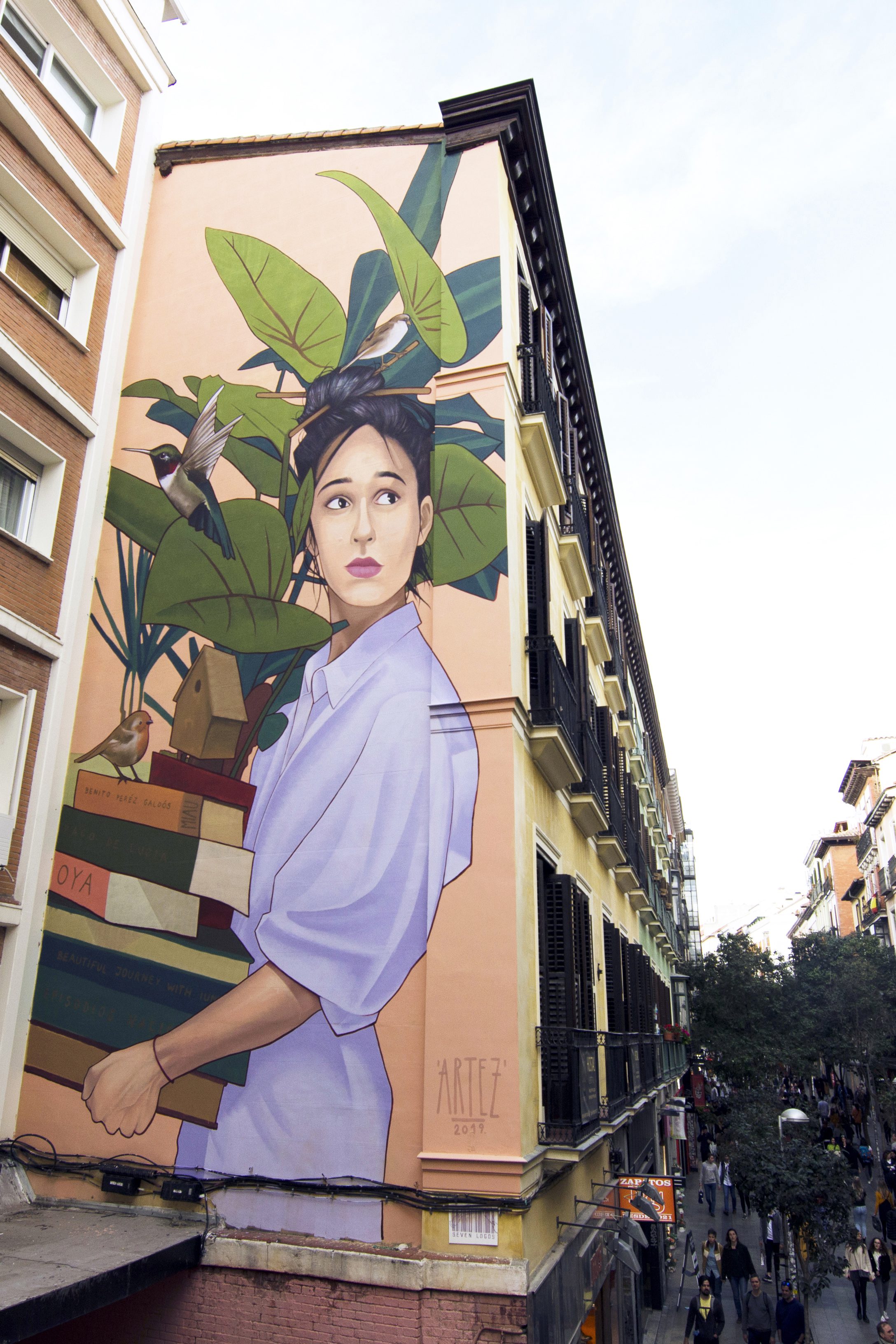 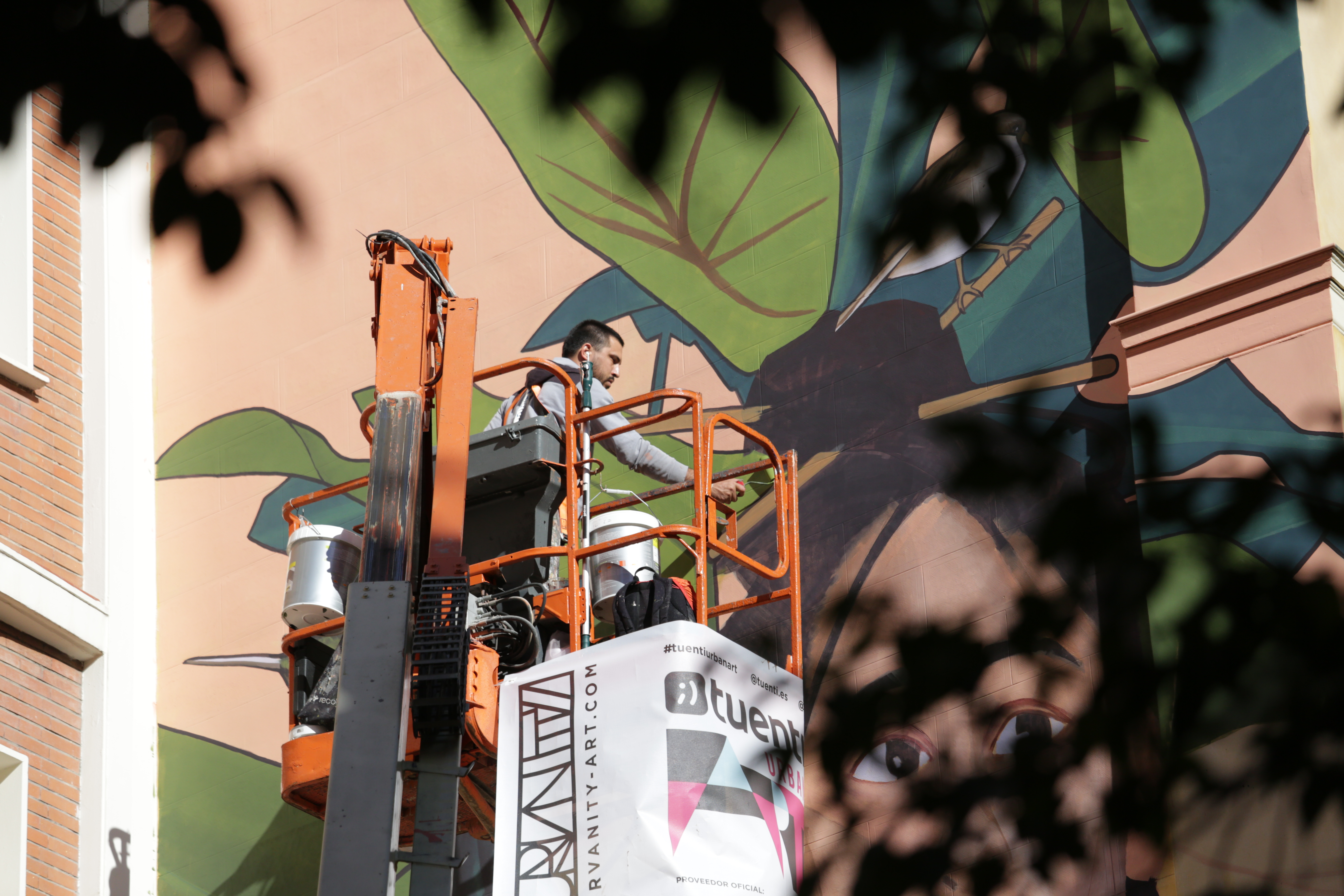 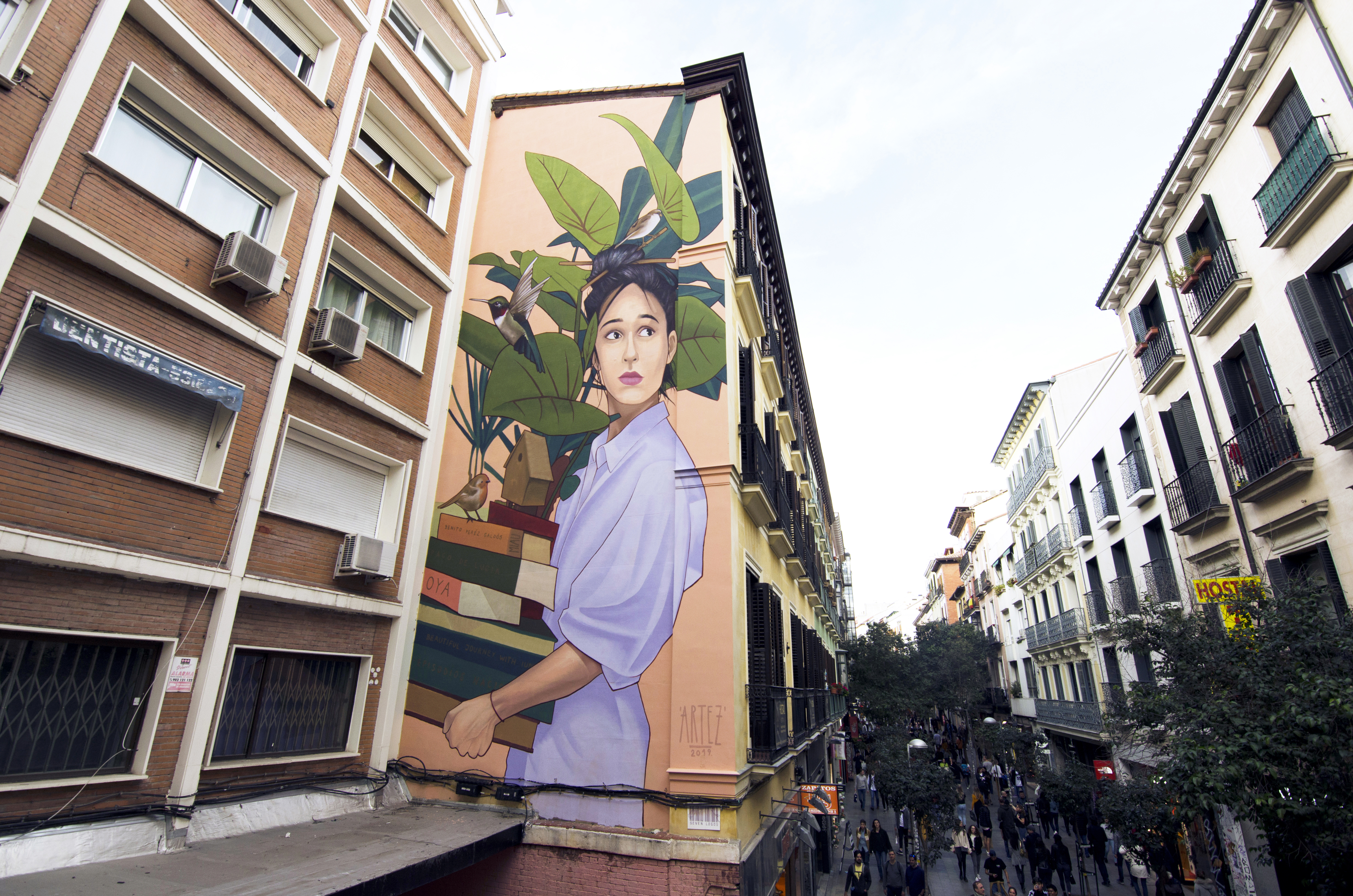 We start at the centric and commercial Fuencarral arteria, right by Gran Vía. The wall painted by the Serbian artist Artez (Belgrado, 1988) during February 2019 is our first stop. «The mural talks about the city of Madrid, a place where visitors from all around the globe are welcome to come and enjoy the vivid artistic and cultural content that it has to offer», says the Artez, known for the paintings of large scale women that he has reproduced all around the world. «Even if this is a very commercial area I wanted her to be carrying a pile of books instead of shopping bags», he says. Books about Madrid’s history such as a Goya’s monographic or ‘The National Episodes’ by Benito Pérez Galdós. Even though he normally paints these big walls hanging with ropes from the roof of the building, this time he used a 15 meter articulated crane. 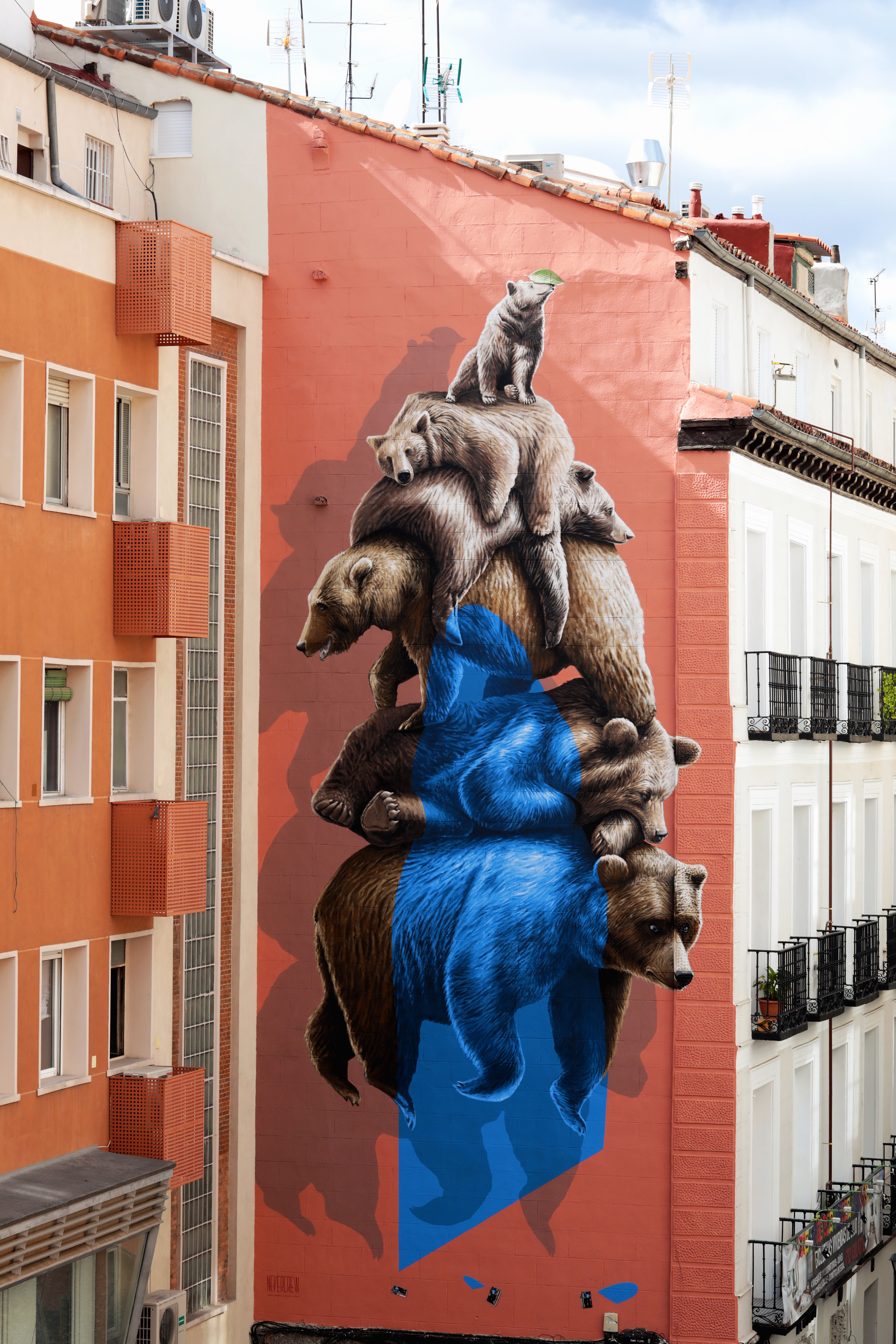 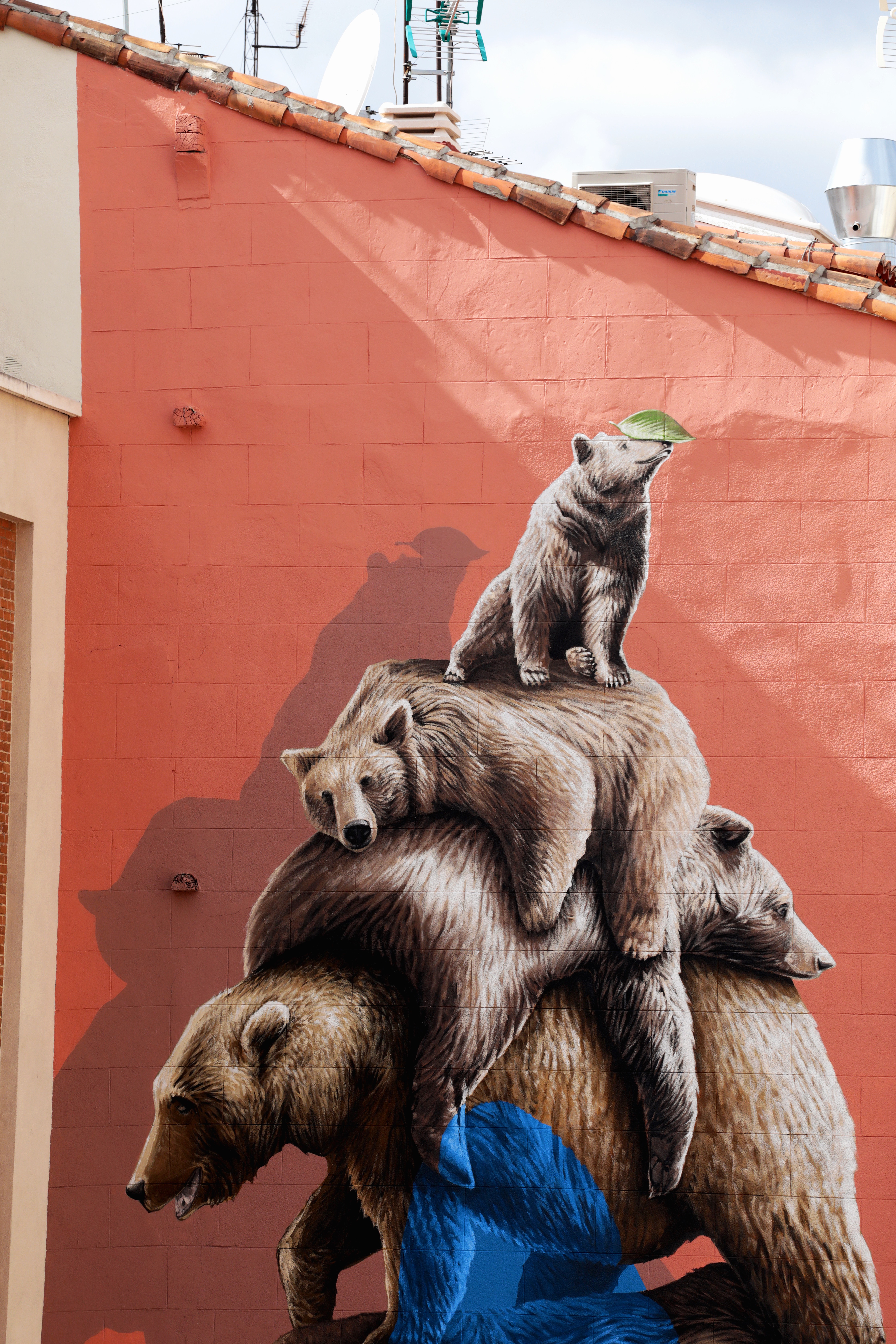 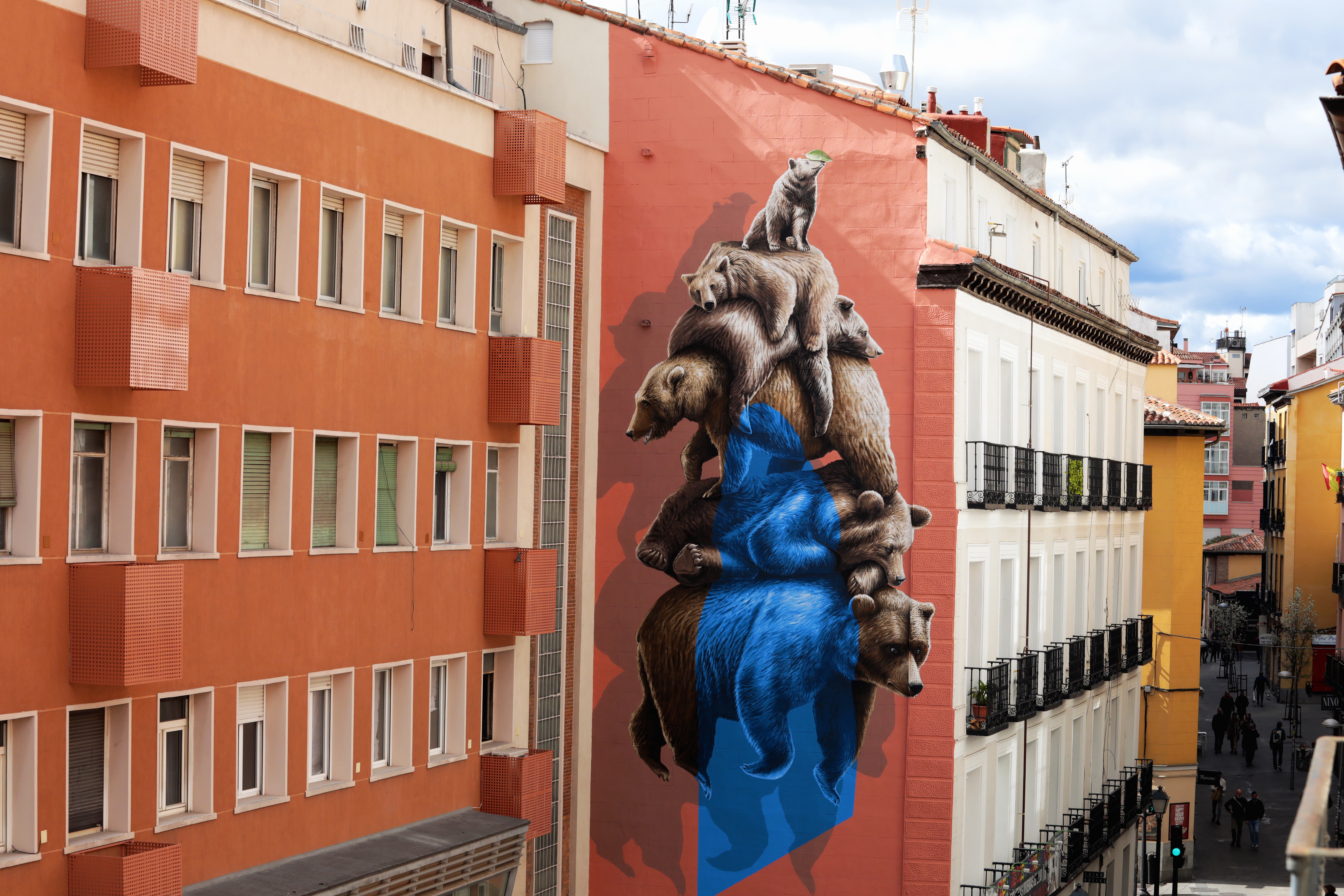 Three minute walk distance from Artez’s wall we will find our second stop. Swiss artists Pablo Togni (Bellinzona, 1979) and Christian Rebecchi (Bellinzona, 1980) are the members of Nevercrew, who visited us during New Contemporary Art Fair Urvanity Art last February. The have developed mural work all over the world painting their trademark whales and bears in cities such as New Delhi, LA, Vancouver, Manchester, Kiev or Grenoble focusing into the relationship between the human being and nature, and mostly in our impact on the environment and over social injustices. «The idea of this wall started directly from the city emblem, the bear with the “strawberry tree”, and we created a pyramid of bears that become smaller as much as it goes up, with a little leaf on the top of the nose of the smallest one», they say. «With this composition we wanted to recall the relationship between mankind and nature, where the second one is gradually reducing in favor of human progress», they conclude. Before heading our third wall, lets make a quick stop by the Mercado de San Antón, a few meters away on the same street to try what their food stalls have to offer. Japanese ramen, Korean delights, an oyster corner, first quality meats… Or why not, a drink on their rooftop with views all over Chueca neighborhood. 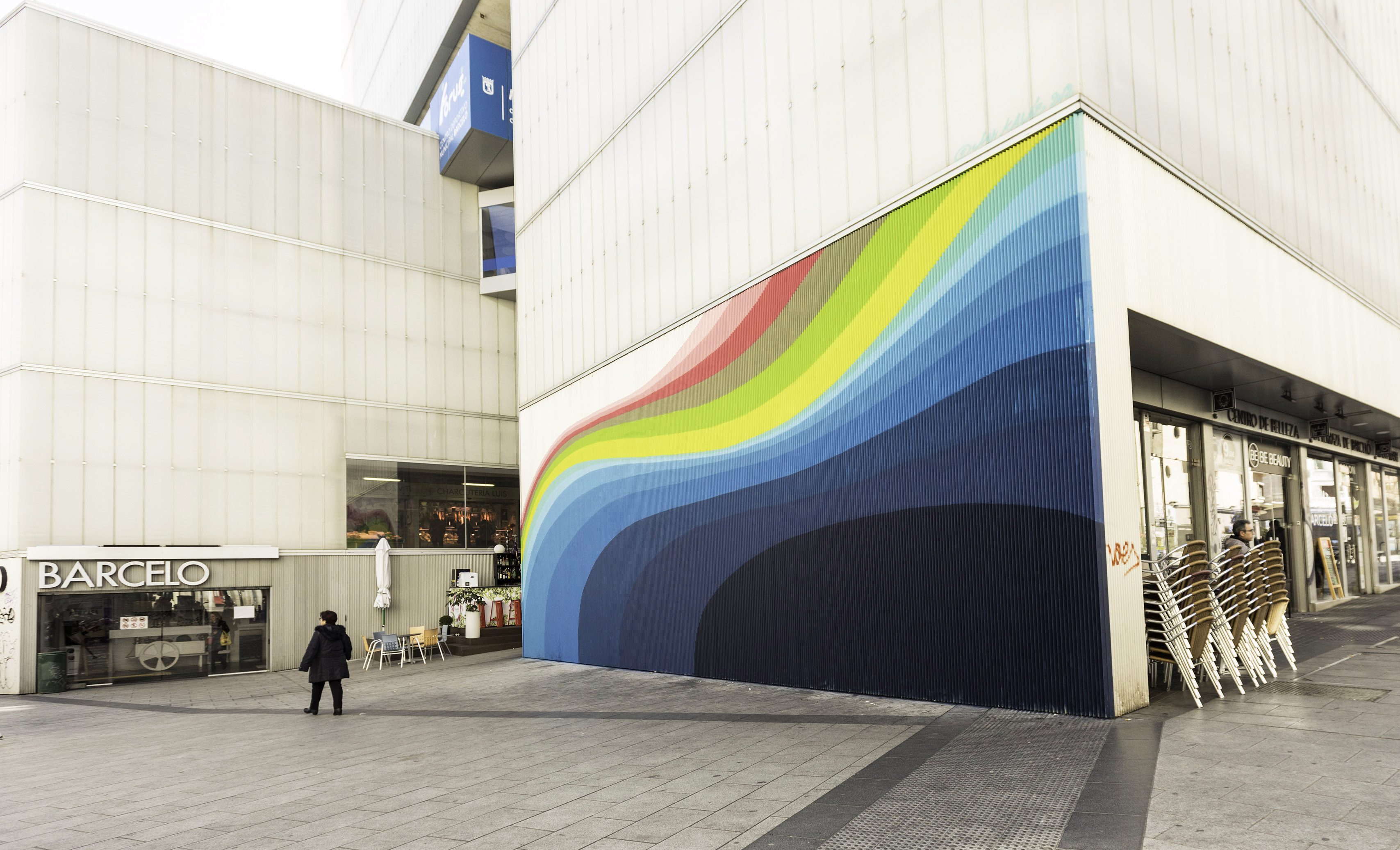 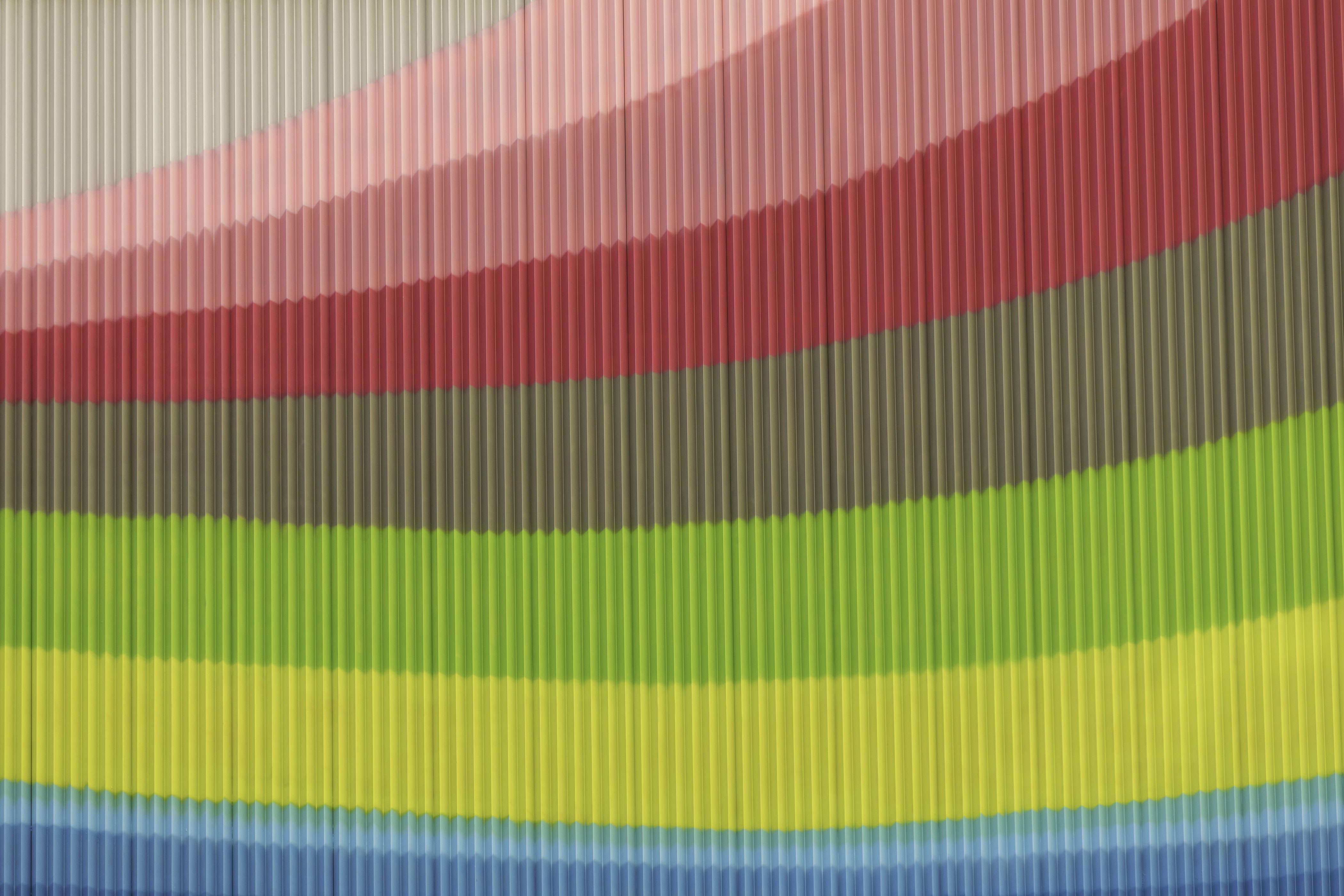 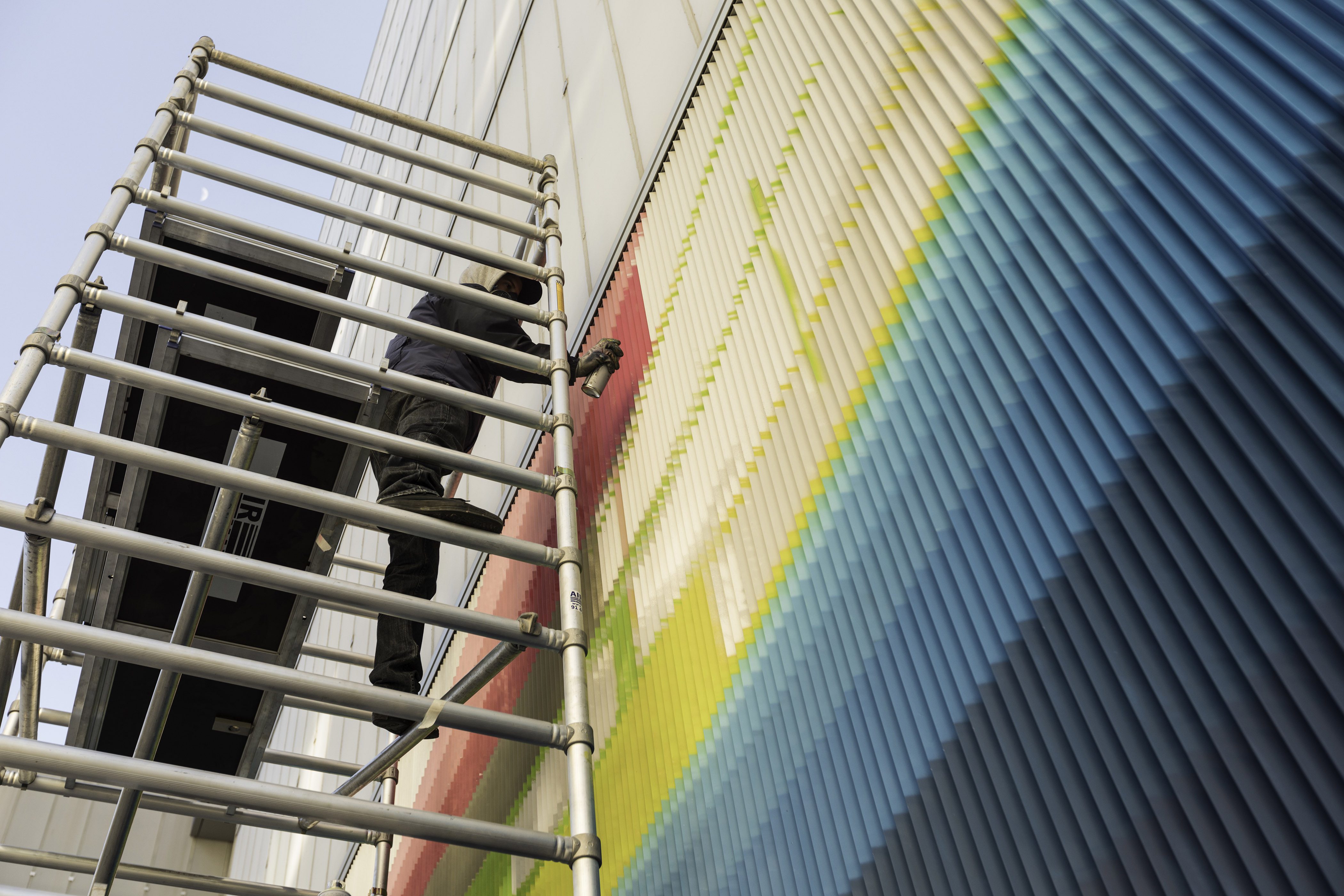 With our stomachs full, lets jump from market to market to our third stop at Mercado de Barceló by Tribunal metro station to see Jan Kaláb’s (Prague, 1978) wall. He was one of the pioneers of Street Art in Eastern Europe after the opening of the borders, living under a regime where graffiti art was unthinkable. He moved to New York where he developed an abstract and sculpted letterings style that he made sure he painted all over the city. These letter sculptures took him to a total abstract work that he later in 2007 adapted to his studio work until today. A year after painting this mural he came back to Madrid to repair some tags that were done on it. 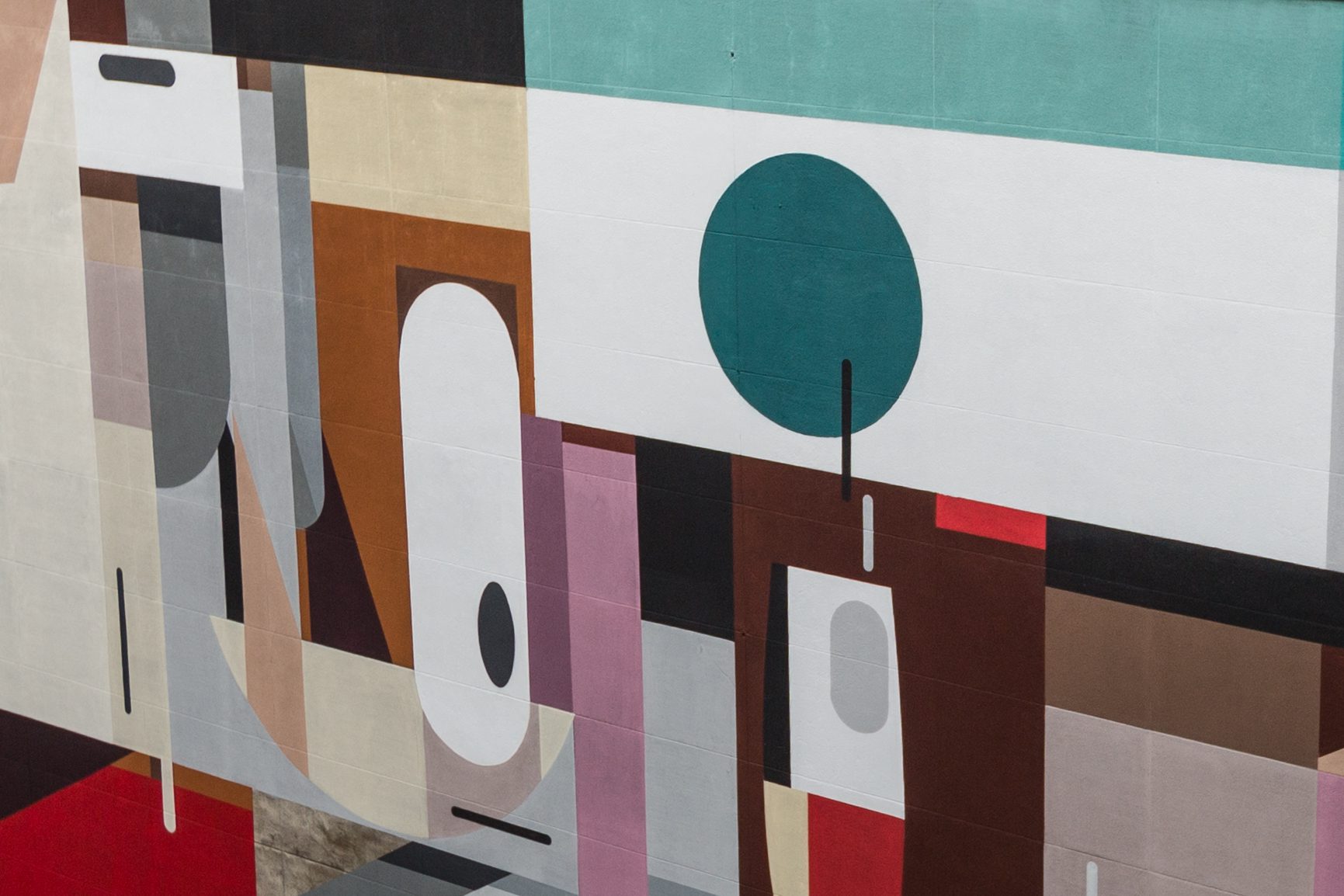 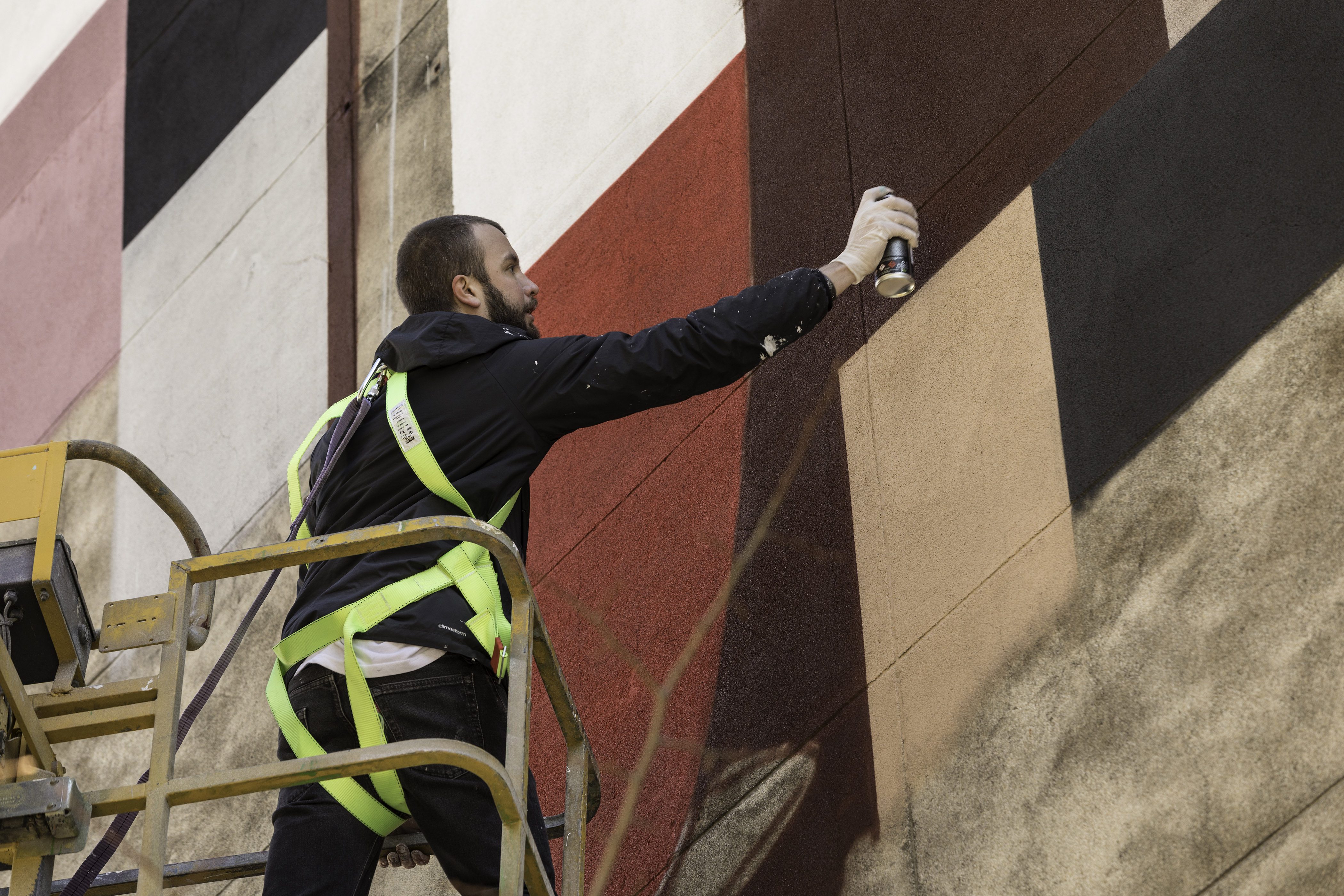 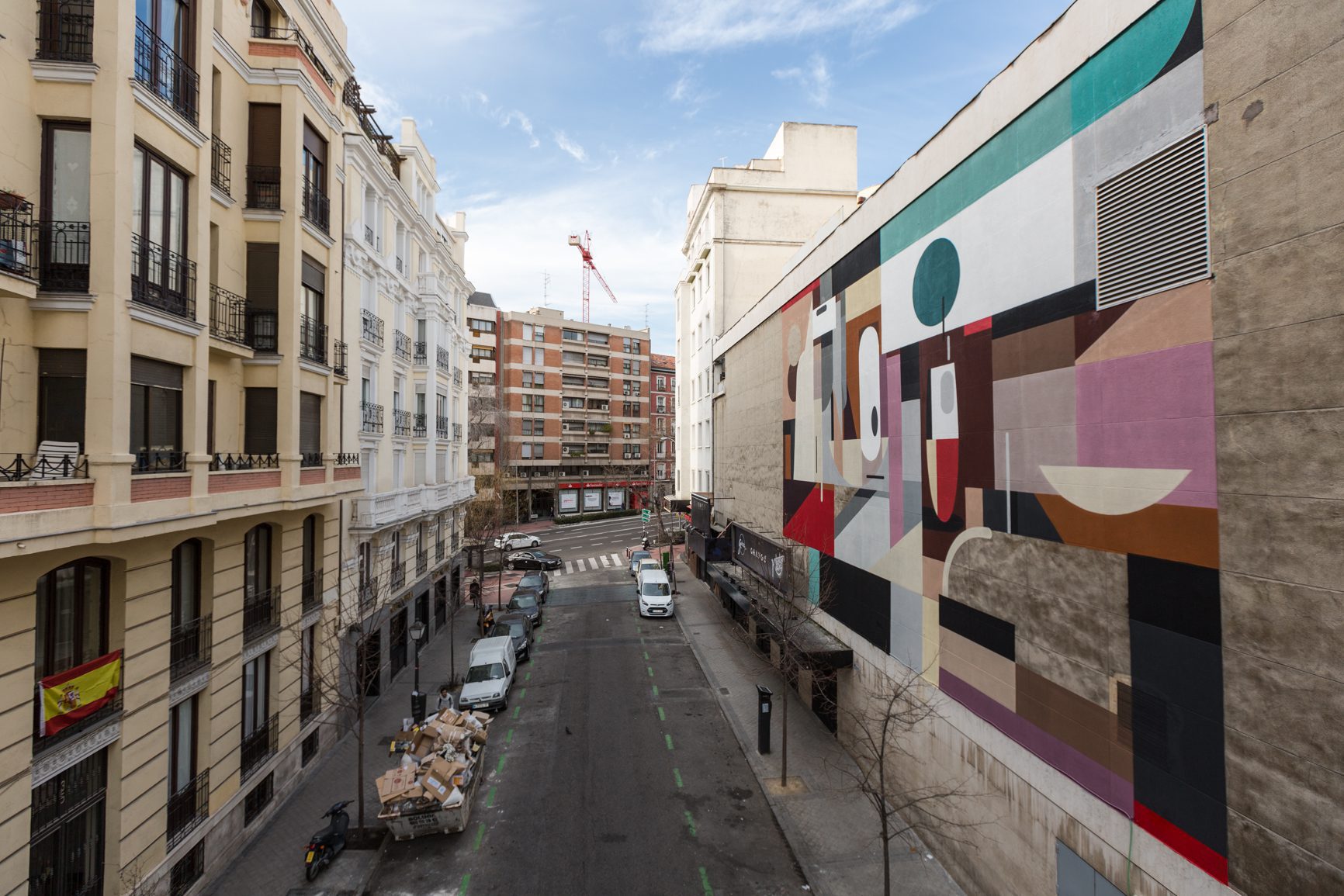 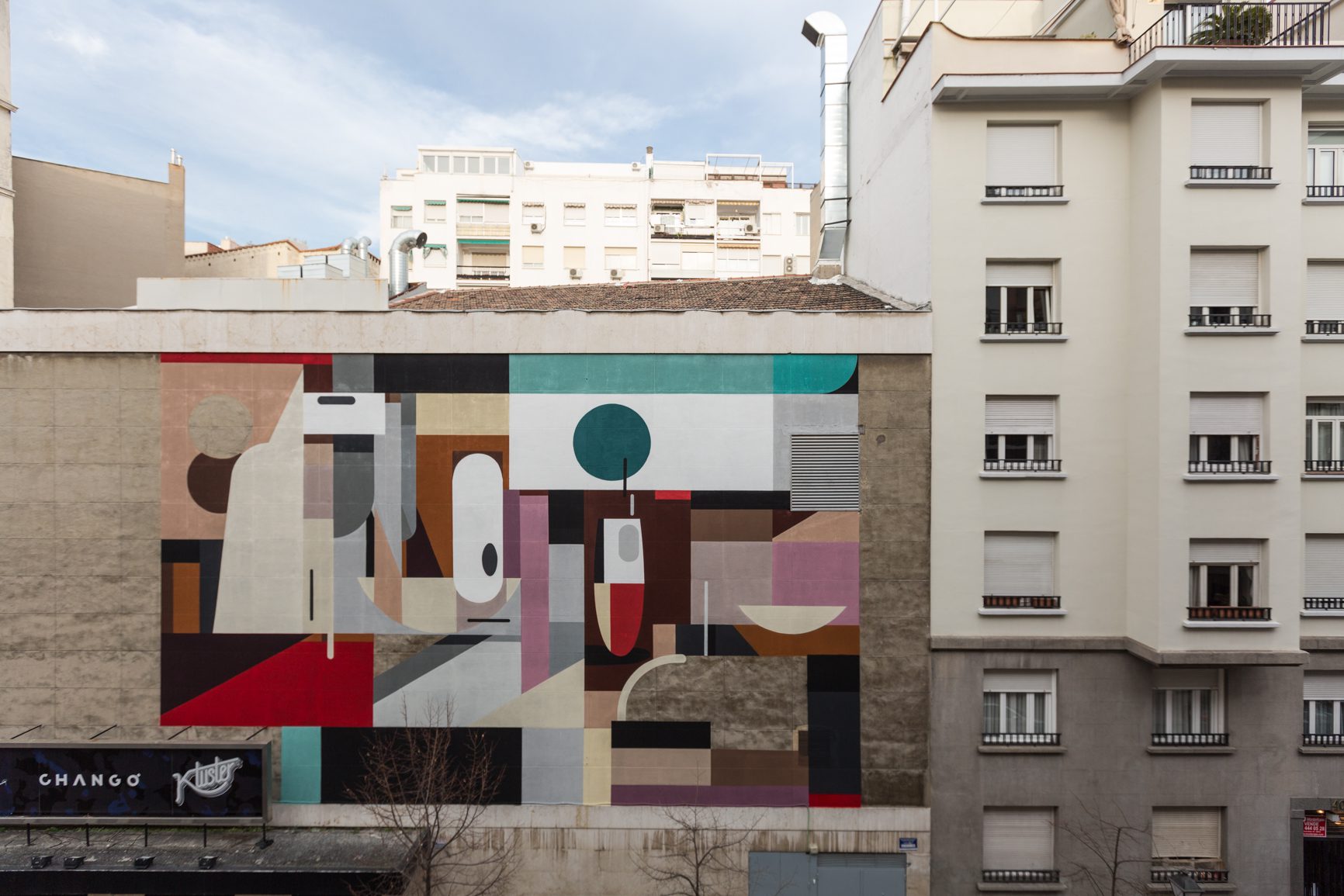 We leave the area of Tribunal and Malasaña to cross over to Chamberí neighbourhood. Elevated approximately 14 meters above the entrance of Changó Club we can find Alexey Luka’s (Moscow, 1983) artwork. Up to 15 meters long of geometric shapes in pastel colors, overlapping each other in a harmonic collage composition very representative of his pictorial work, one of the most talented and influential young artists on the Russian contemporary art scene. Luka is a specialist in the decipher of these puzzles that the observer will have to reconstruct and consequently interpret the image, starting precisely with the colors suggested by the shapes making faces, characters and landscapes that alternate in a game of perception that activates our imagination. 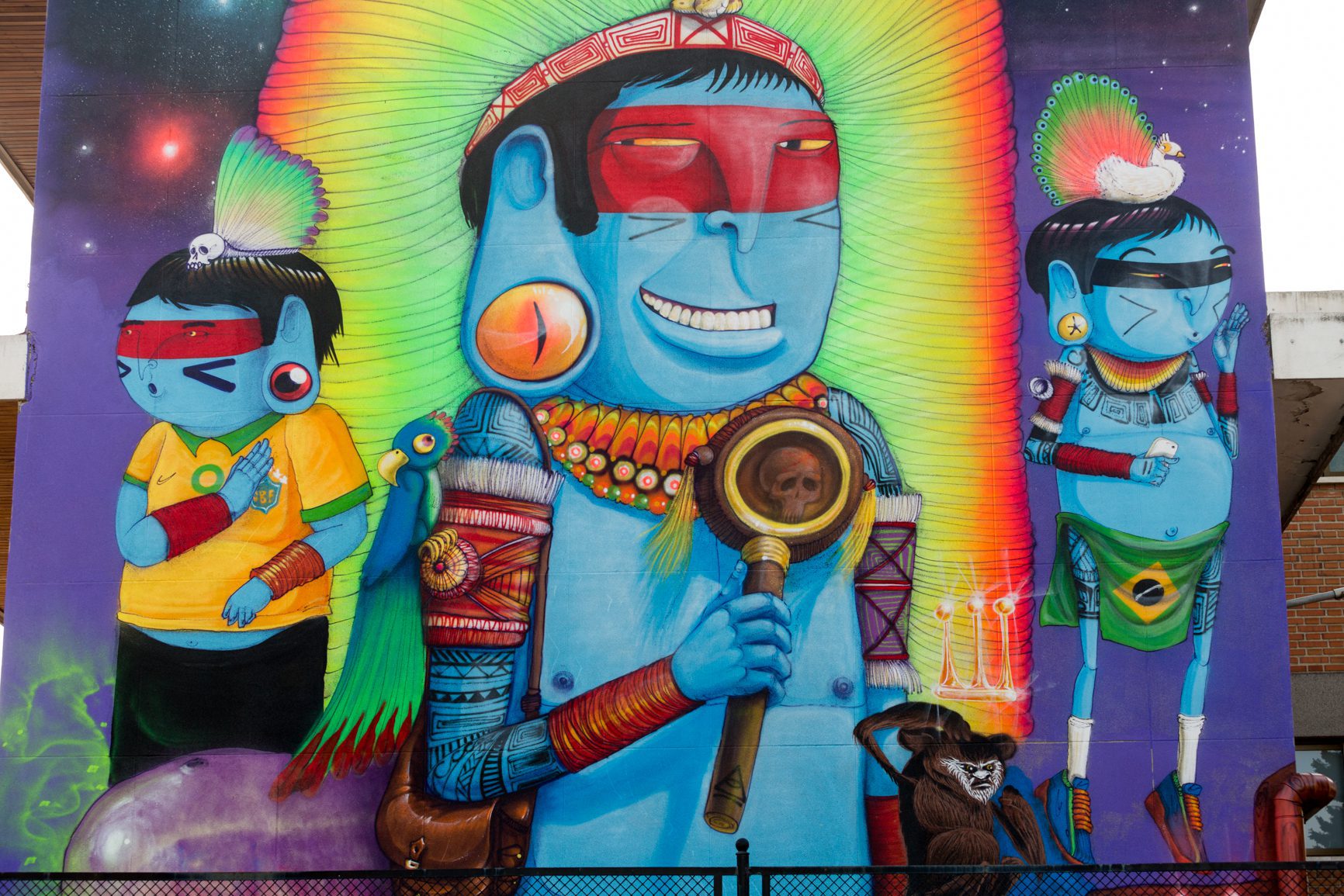 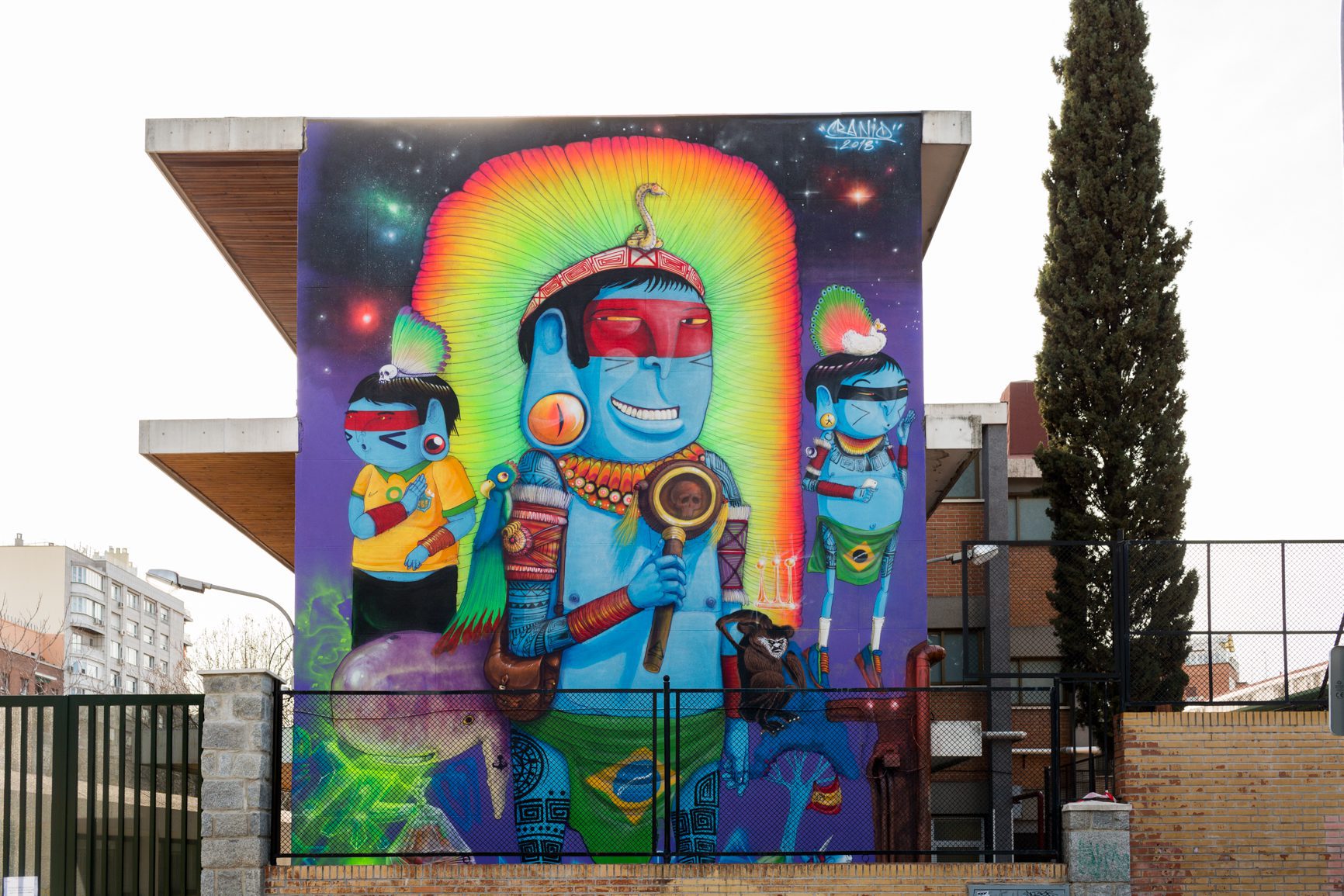 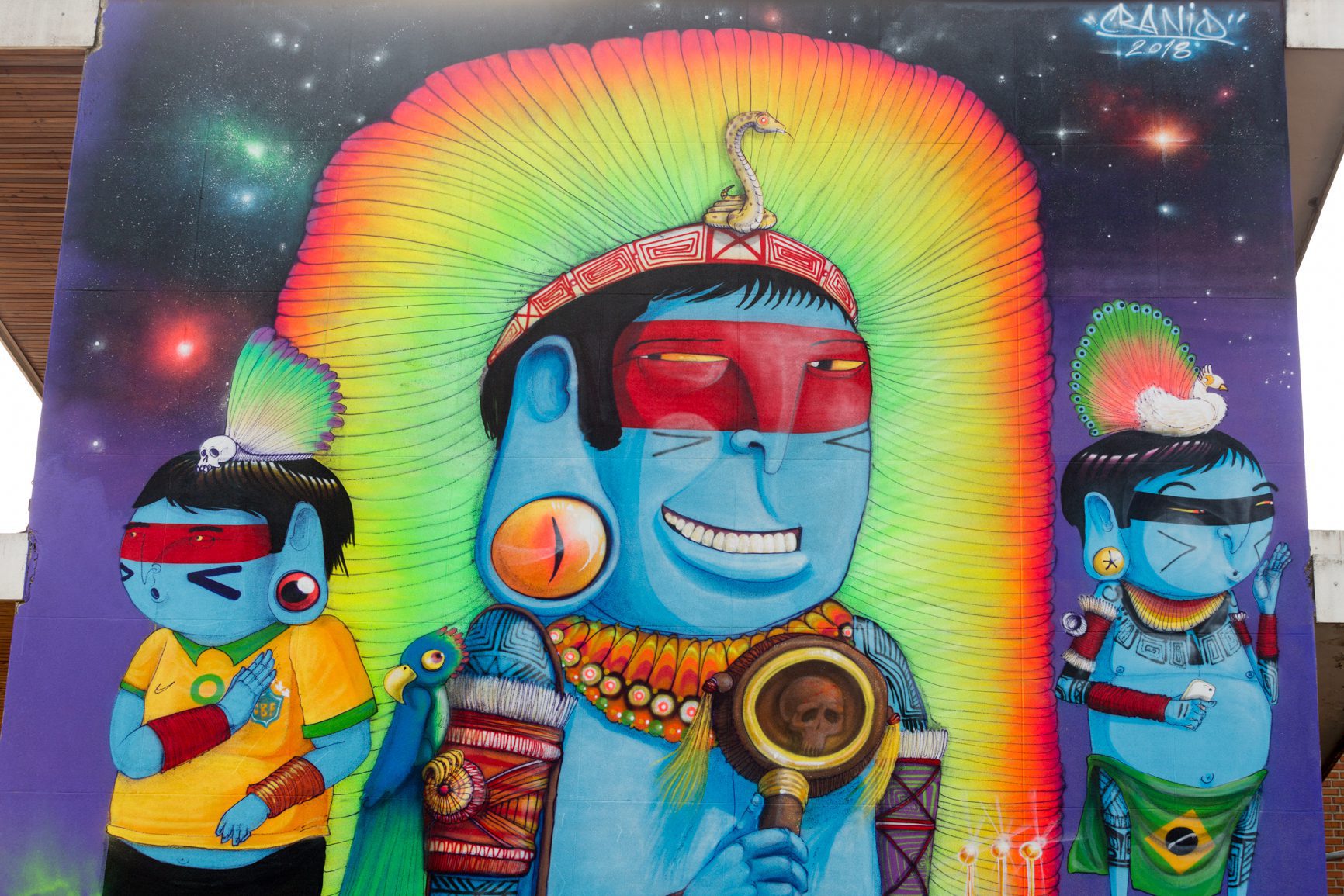 For those who still want to keep it up and lengthen the walk, we will now approach the Canal area, also in Chamberí, to see the work of Cranio (Sao Paulo, 1982), one of the most internationally recognized Brazilian artists. A mandatory stop halfway between both walls is the Mercado of Vallehermoso, with one of the best gastronomical offers in the capital today: Tripea’s open bar by Roberto Martínez, Kitchen 154 or Randall Roasters coffee, without forgetting about the traditional fruit, meat and fish stalls. Ten minutes away, at Colegio Asunción Rincón you will recognize Cranio’s work by his blue-painted Indian characters that represent the indigenous tribes of Brazil and that make the viewer reflect on social issues such as consumerism, corruption or environmental policies. As he himself acknowledges, Dalí is one of his greatest inspirations.