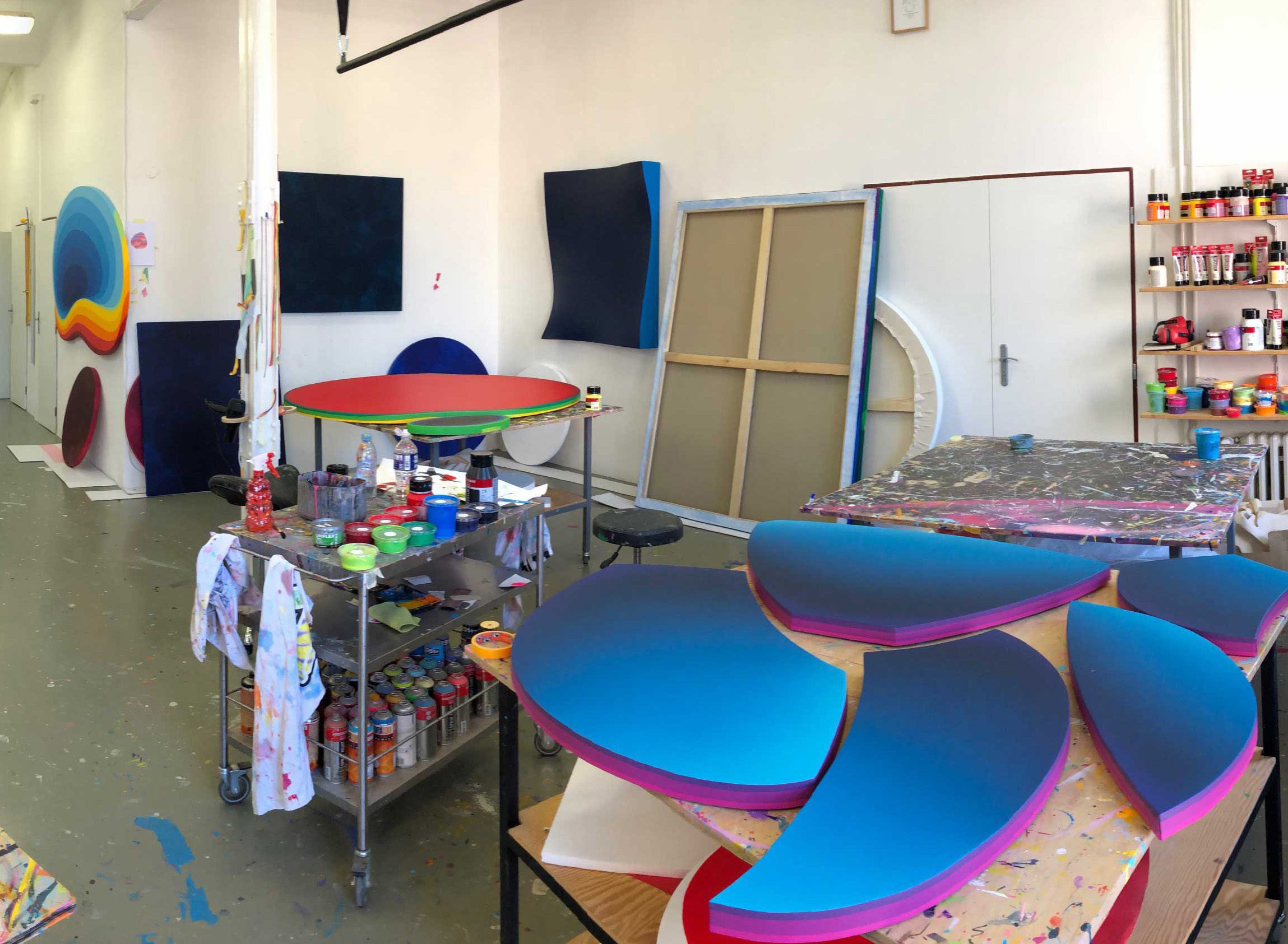 Jan Kaláb (Prague, 1978) belongs to the oldest active generation of graffiti writers in the Czech Republic. Maybe you know him as Cakes, the alias under which he became one of the pioneers of the graffiti scene in his hometown, Prague with the DSK crew. In the year 2000 he traveled to New York were he made one of his biggest achievements as a writer and managed to paint a whole car of a subway train. As Point, his other pseudonym, he pushed the limits of graffiti creating 3D letters in wood and different materials and other sculptures that he would place in the streets all around the world. It was in 2007 when he started exploring abstract art in his studio, dominated by geometrical figures, specially circles, while investigating depth, time and motion concepts. «I don’t imagine myself doing anything different than art. I try not to doubt that much about what I do, which of course still happens and it’s good to be critical to yourself, but the doubt can’t be stronger than your own creation», he says.

This contemporary artist, proud of his graffiti roots, welcomes us into his studio located in Prague -and very close from where he lives- in a live video conference through Instagram. You can check the whole video by clicking here.

«This is the main space were all the paints are getting done, the whole brush work. Here is where I spend most of my time and I have two guys helping me, not every day but almost! Now I am actually experimenting on the paintings. I’m working on this new paintings right now and I’m really happy about it. It’s a game of colors, it’s a dark blue done with many many layers. It’s actually a darker work than usual and I will probably do some lighter stuff in the future but it depends, I kind of like this monochrome style. It’s fresh and I like to change and evolve a little bit, that’s what makes me happy, to try to do new stuff all the time. The good thing is that now with the coronavirus everything has stopped or been postponed, so I have the chance of staying in my studio, stop the traveling for a little bit and it’s giving me the possibility of work on the things that I’m really interested in», he says when we start the live tour through his studio. 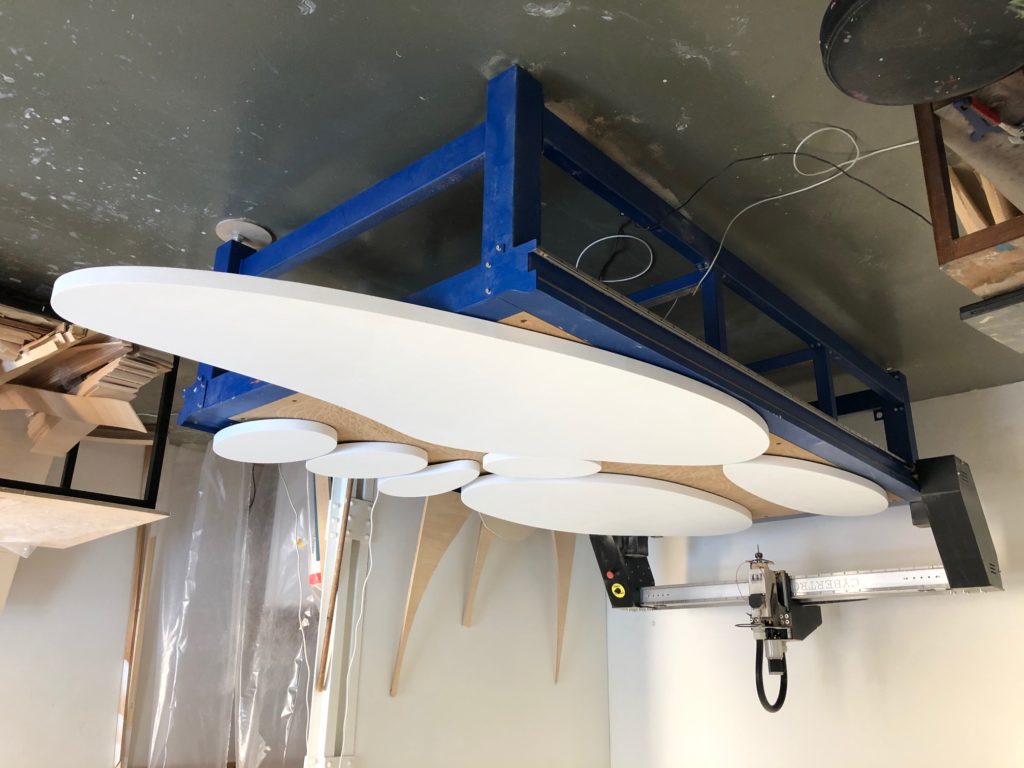 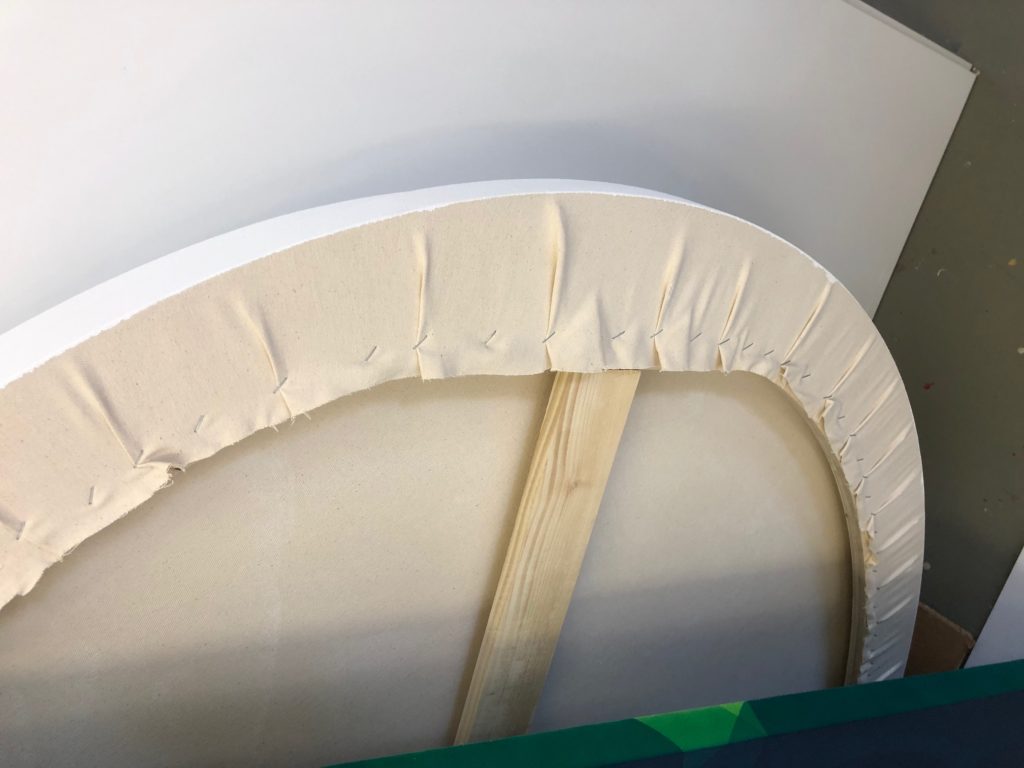 «This used to be my office but I had to give it a second use. Before I had a couch, a big table, some paintings hanging, a library… But I recently bought a CNC cutting machine so all the dusty work is now produced in here. The machine is for cutting wood. I send the documents in an AutoCAD file from an old school computer that I have and it does the cutouts of the wood. I’m still learning how to use it but there is big potential in here. I will probably do some more interesting stuff in the future but now I’m super busy with the paintings and I don’t have that much time to experiment. I also have some of the canvas I use here. They are wood inside and then very nicely stretched. After being stretched we put many layers of gesso on it until is perfect to paint».

«This is the spray room, now I have some pieces from collections that I’m working on. All the spray work is done in here because of the ventilation. It always has to be closed. I play around here with colors and spraying. Even the wall looks like an artwork! I even tried to paint a canvas with the style of what was happening in the wall but I didn’t like it so I went back to my traditional work» he says laughing. 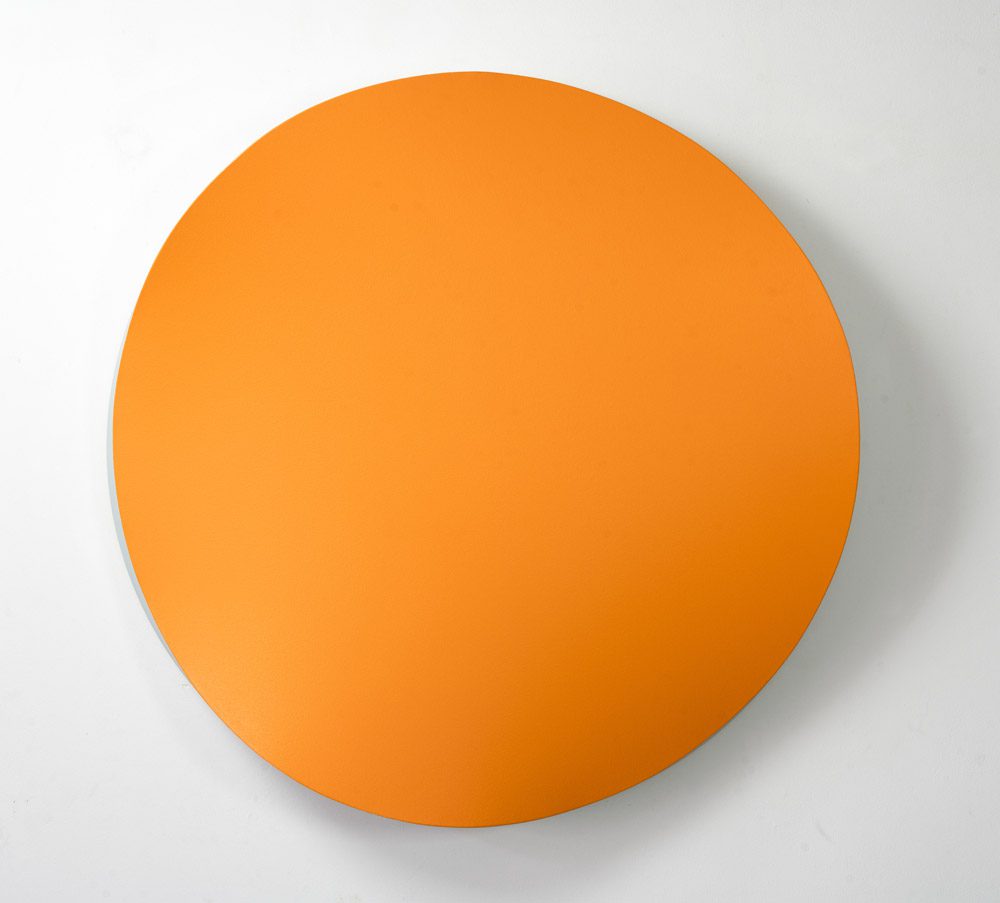 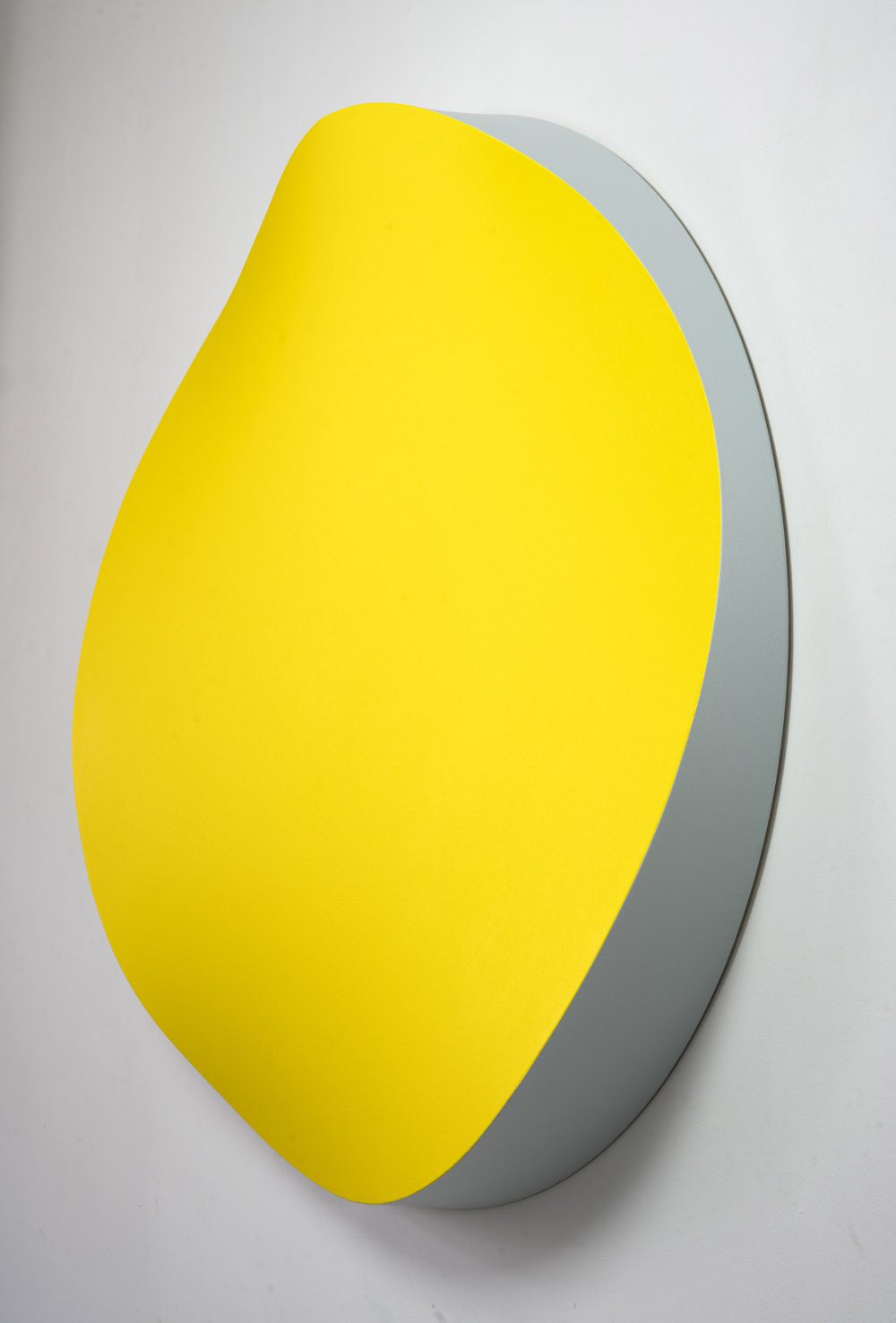 «Of course I would like to exhibit it. My next show will be probably based more on these works which I did last year in Valencia, but I really have no rush. I’m really happy that I’m being able to work I won’t say slow because I work hard and fast but not being stressed with the rush of having to be somewhere else the next week. Some other works will be going in June to Fabien Castanier Gallery, which is based in Miami but will be an online show in virtual reality, so I will just send the photos and they will put them up on the virtual space».

His office with a couple of Point sculptures, his artwork hanging and some of his books. 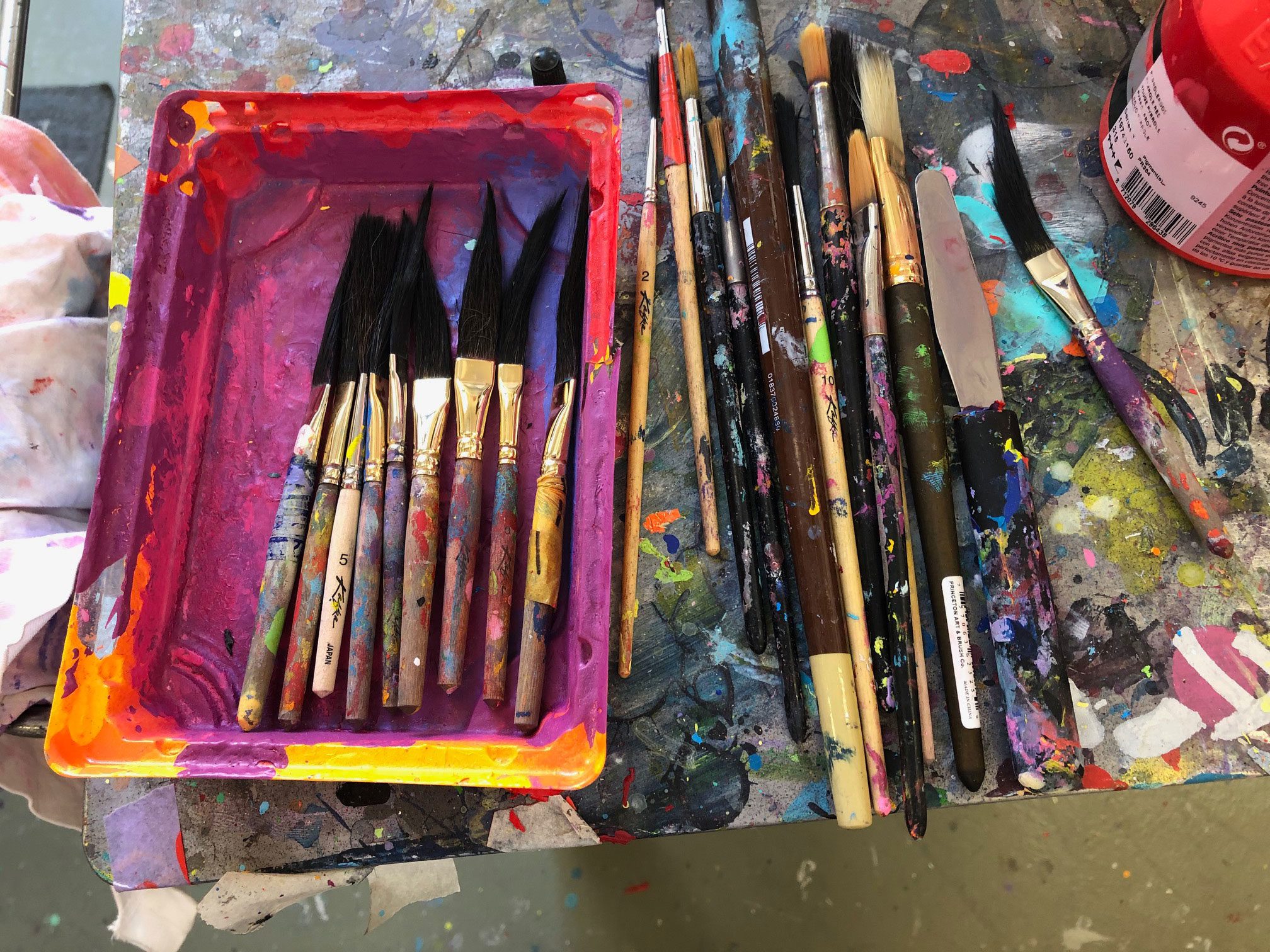 Kafka brushes for a steady hand

«This is my office now and here is where I get started with my creative process. First thing I do is to start drawing in this notebook some sketches. Then I transfer the sketch to Illustrator where I work with the colors. I print some visualizations on Illustrator and play around mixing some colors. Then the frame is produced in the CNC room, stretched and then I paint and play in the spray room with some colors for the base or the fades I normally use spray paint with the gun. To paint the color lines of the boarder I use acrylic paint and a little Kafka brush. The colors I really just choose them depending on the mood I am in. Maybe pink, maybe purples, blues… It’s more about the mood». 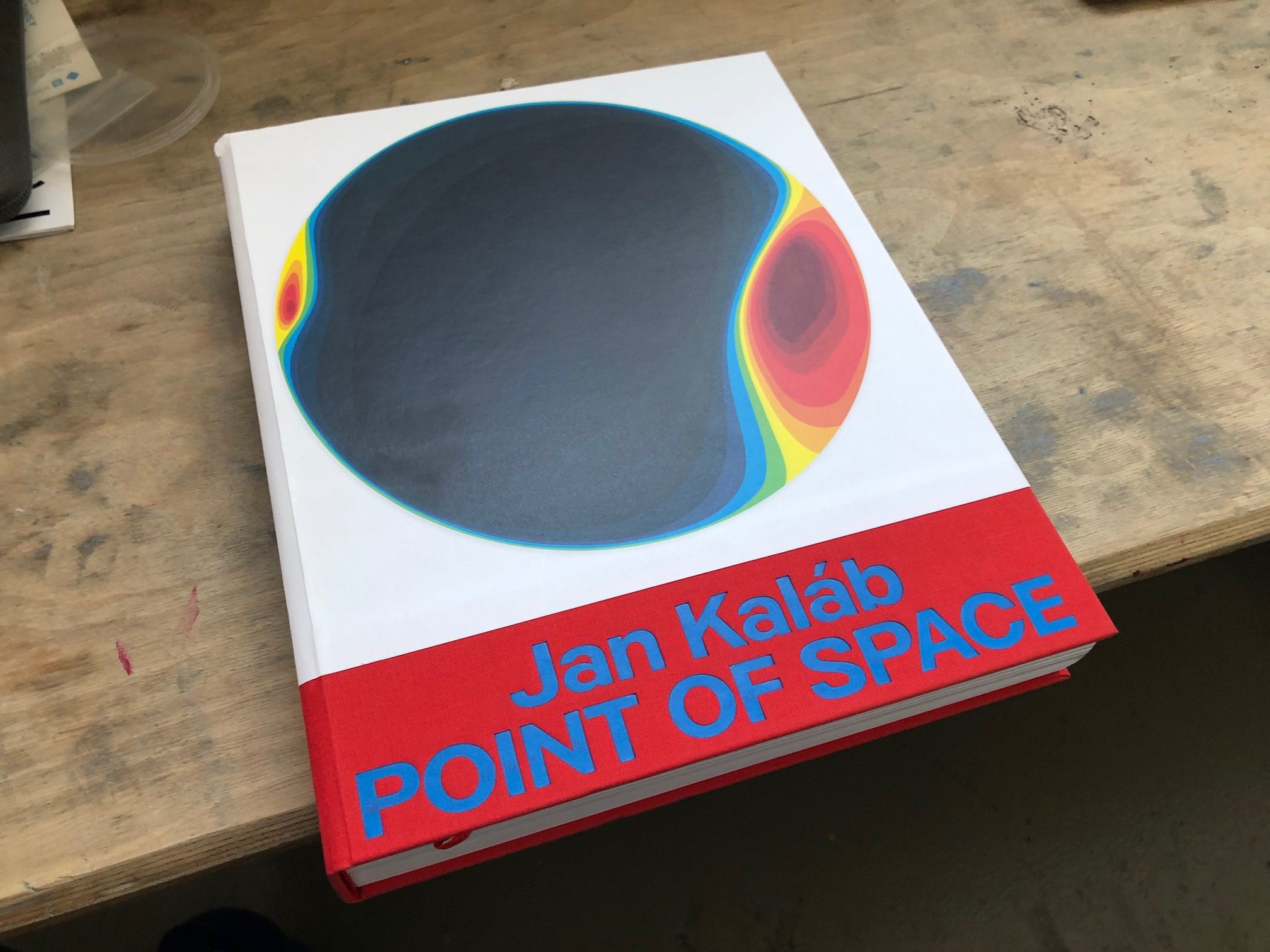 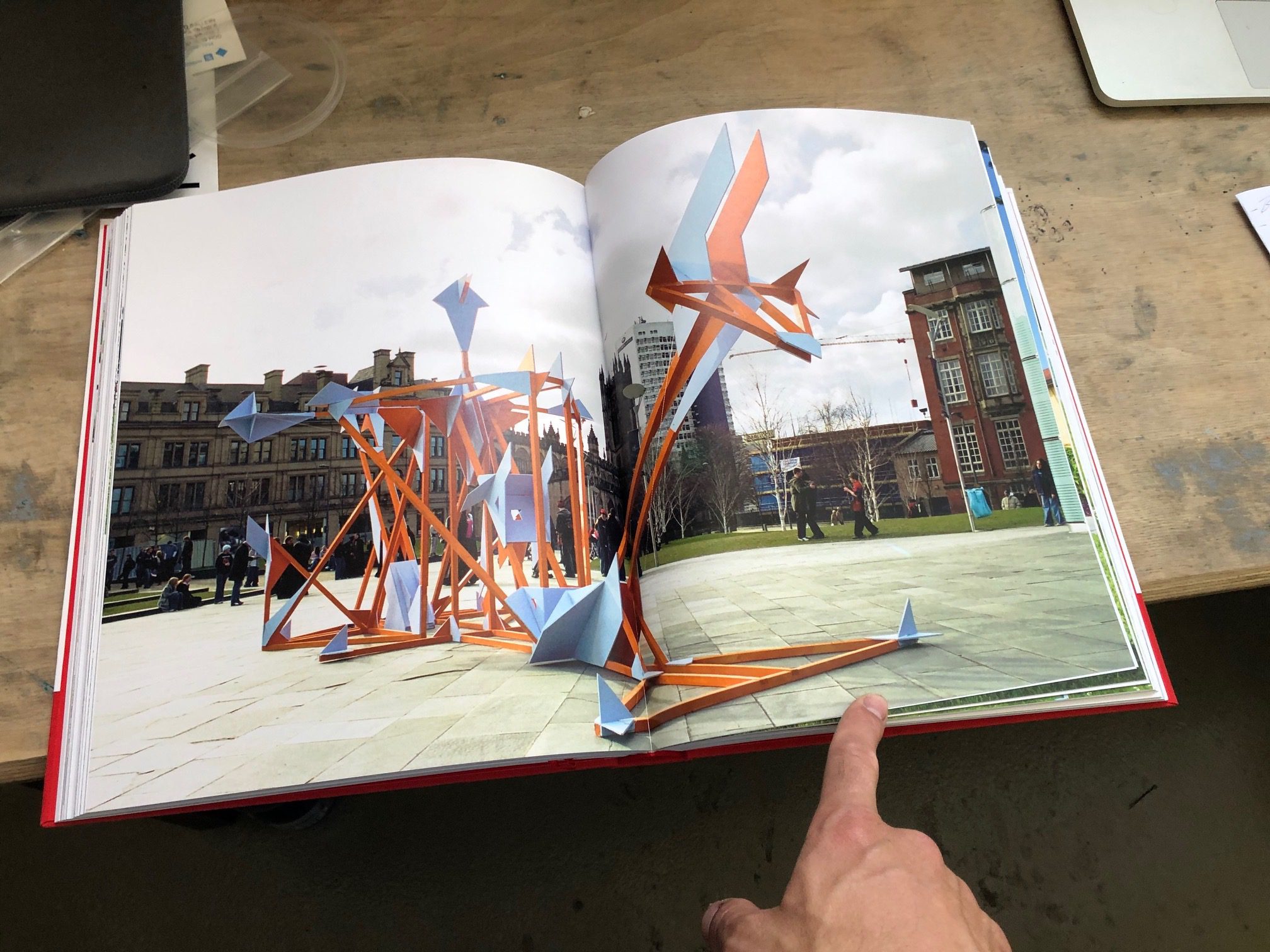 Point sculpture inside the book 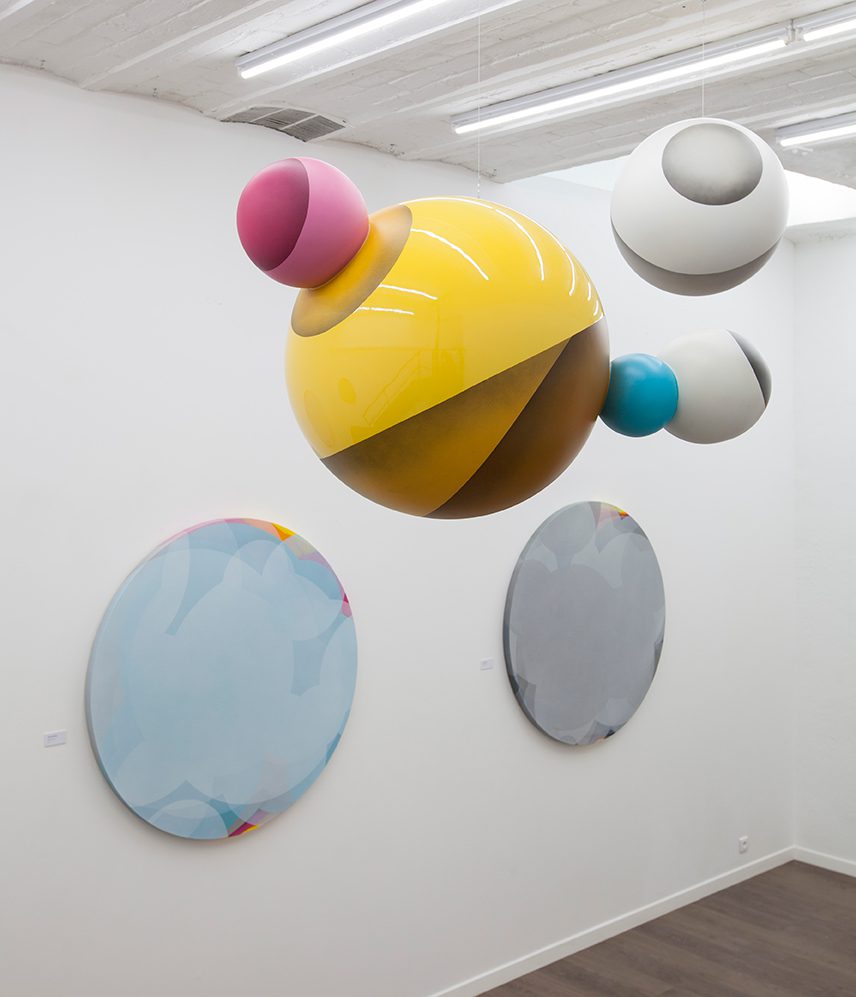 «I published this book almost a year ago. In the book you can see the path I’ve been going through in my career, there’s some traditional graffiti walls I’ve done where you can see the evolution. Walls from the 1999, 2006… There’s a lot of research and at a certain point you can see my steps going towards abstraction. I went from working with graffiti letters to using elements such as circles or squares. With the time I sharpened these figures and did a much simpler structures until I ended up just working with circles. The circles I use them as spheres, as holes, as planets… I painted it on walls, on canvas and then I also took it to sculptures. 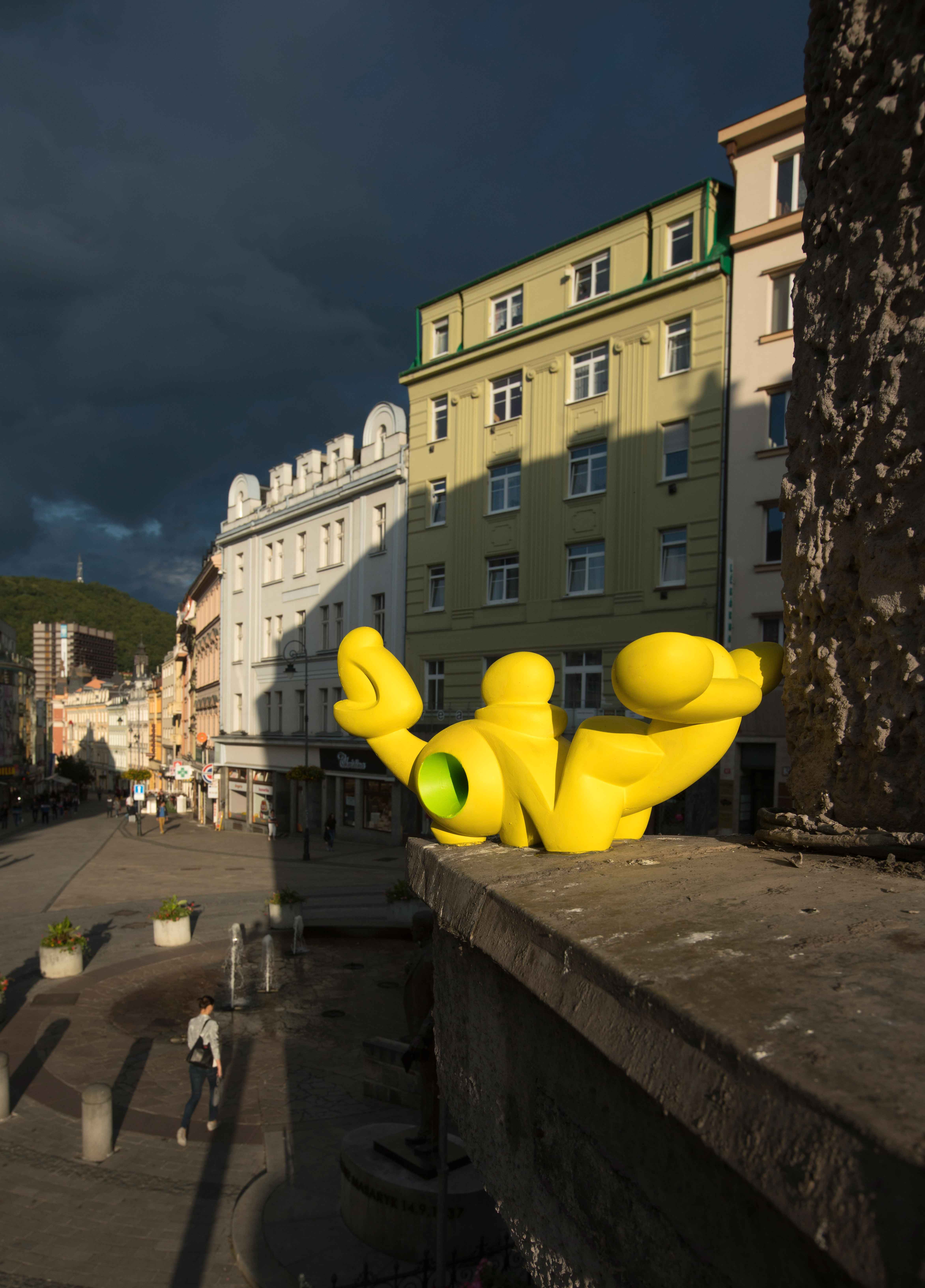 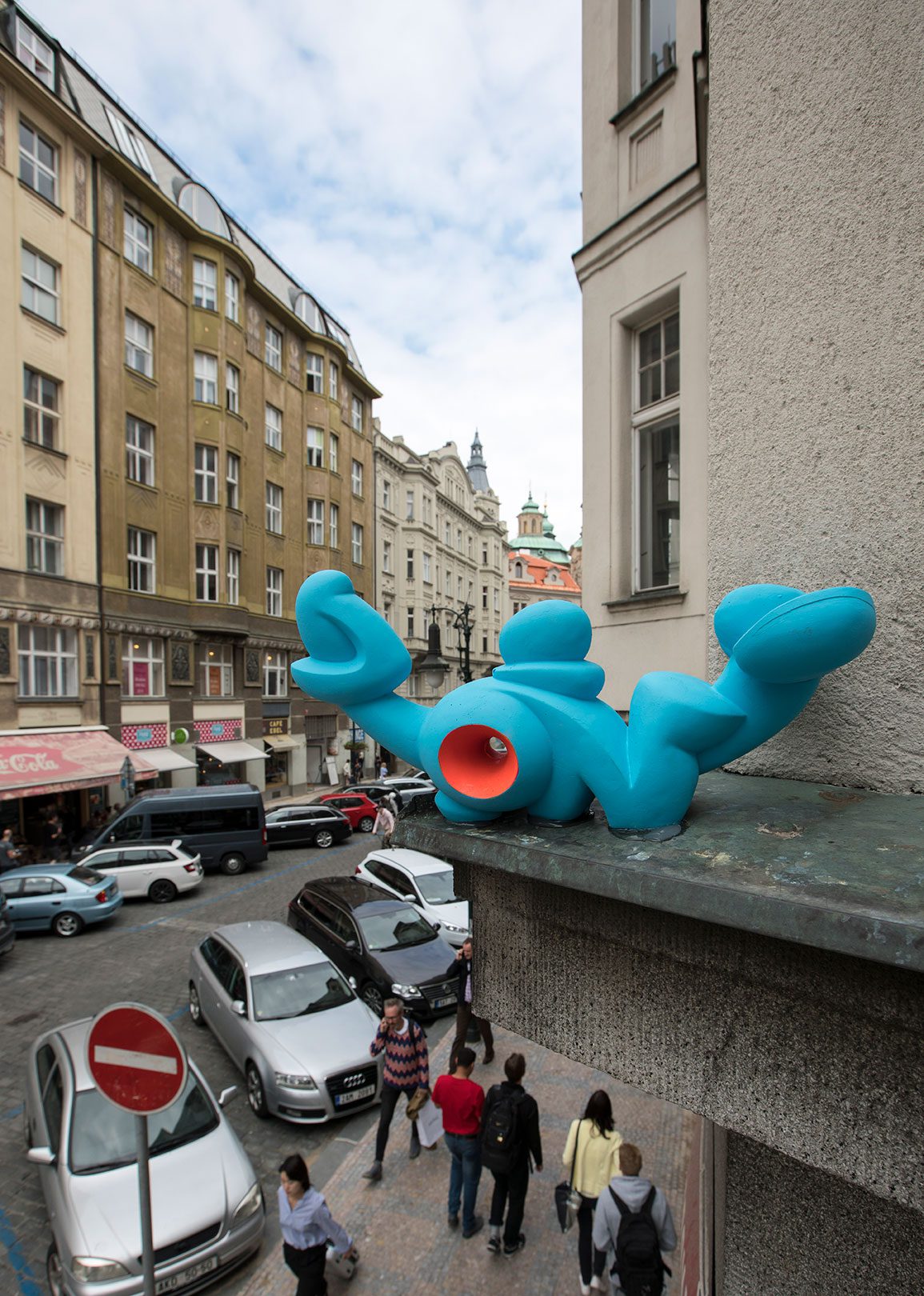 I have a few old ‘Point’ sculptures on the top of my library in my office. Some I made out of plastic and I have a few made out of bronze too. Now I’m working on a sculpture that would be 5 meter long. It has taken already two years of production, it’s a long process, we needed to draw everything in 3D, a lot of men work, you need to model it…» says about the process of the last large scale sculpture he’s working on. When we ask him about the Point sculpture invasion, a project were he placed small ‘Points’ all around his town, he says: «In 2018 was the last time I did it. I realized I can’t run around the town anymore putting some of my sculptures for free in the streets. I did enough when I was younger», he laughs. «Also right now I’m more focused on doing abstract work. love doing sculptures but to play around with ideas it’s much easier to do it on a canvas, you can play with colors, the process is much faster…» he concludes.