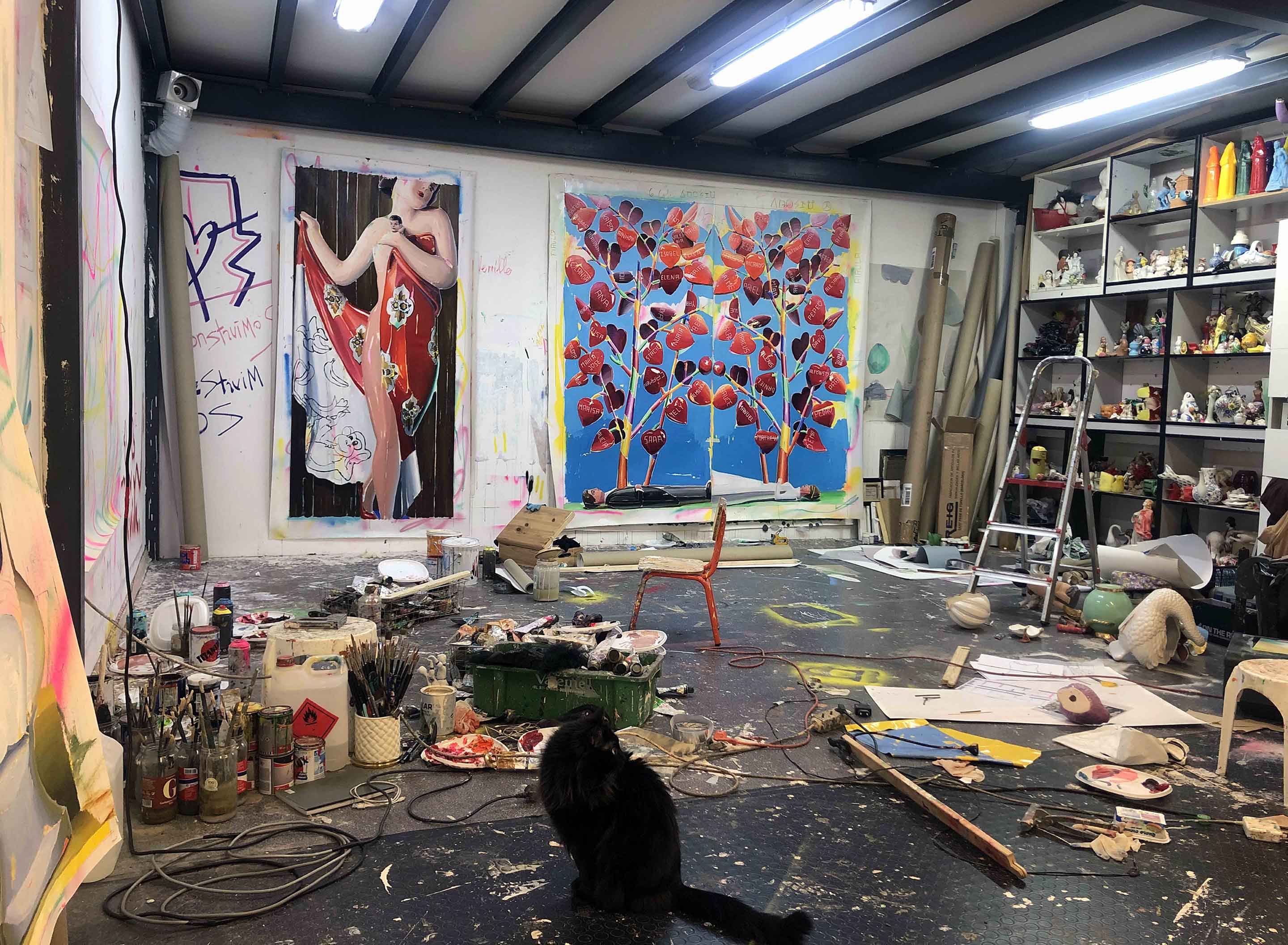 Shelves packed with porcelain figures of which only a few of them will be lucky enough to be on her next artwork, masks brought from Mexico or from flea markets all around the world, spray cans, oil paint and Pepsi, the cat, are the main inhabitants of Ana Barriga’s studio in Madrid.

But is her artwork the one that lights up the space. Still lives with a glazed finish with Ana’s characteristic use of neon colors and an artistic language combining innocence and fun with an extraordinary sensitivity and thought-provoking content.

Ana Barriga, who this year was part of Urvanity Art 2020 represented by Yusto/Giner Gallery, opens for Urvanity the doors to her studio. And she does so through her own eyes (and camera). Let’s take advantage of the moment to get ourselves immerse in Ana’s interior world, which currently is invaded by her latest project “Interior Plants” for the University of Granada. Come in and get a glimpse of her work from your couch. 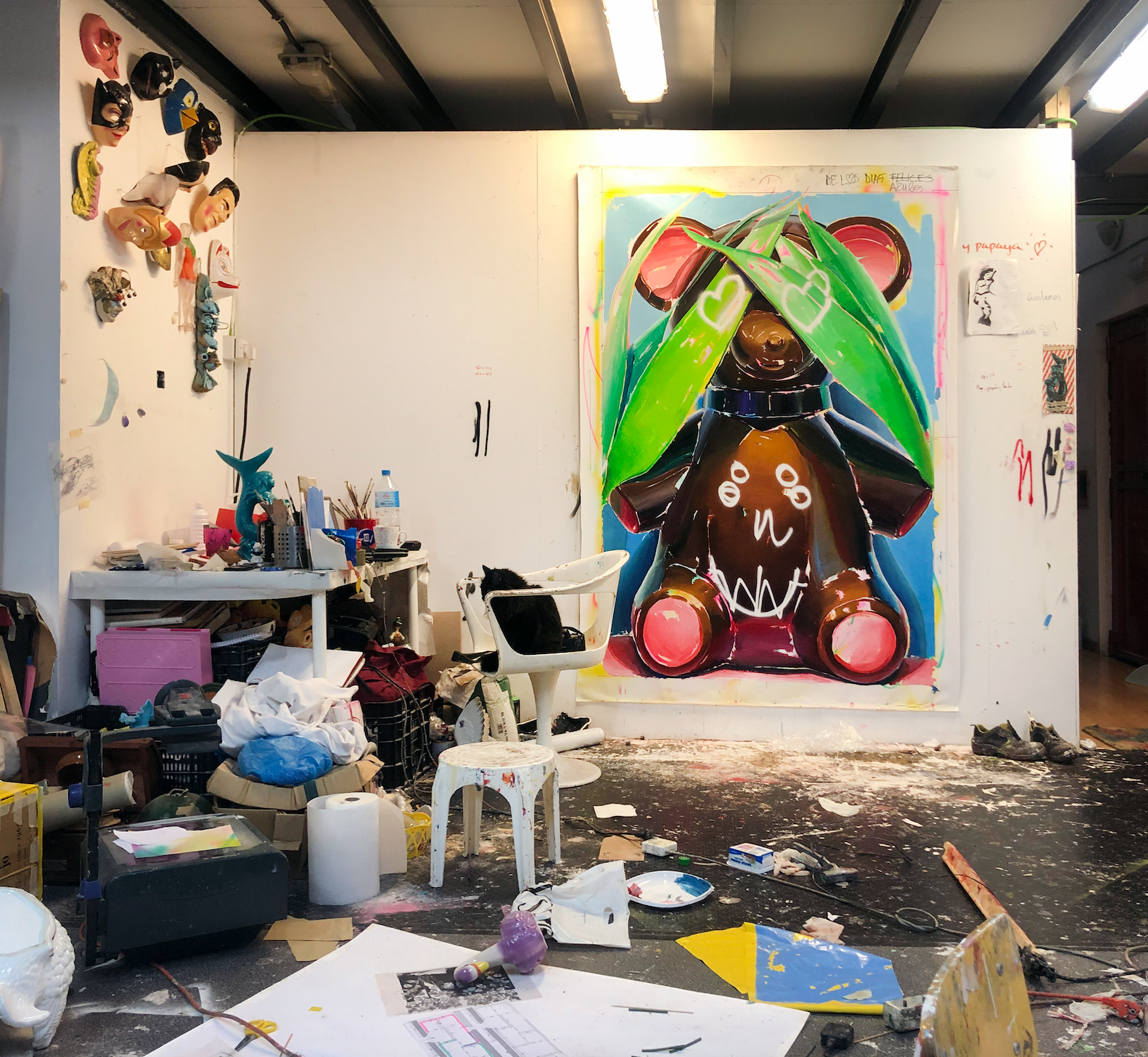 «I had the opening in Granada this week and we were forced to postpone it», says the artist. «Every year they offer a public scholarship for artists and they also invite one. They called me this time. The work with the bear in the picture, ‘De los días azules’, is one of the works that will be shown there». One of the requirements of the University for this project was for the artists to work with material found inside their venue, «they have a department dedicated to botanicals which is really beautiful. That’s when I had the idea about the interior plants, their medical properties… And now, with this situation that we’re living, I have the feeling that we are the interior plants ourselves», she reflects. 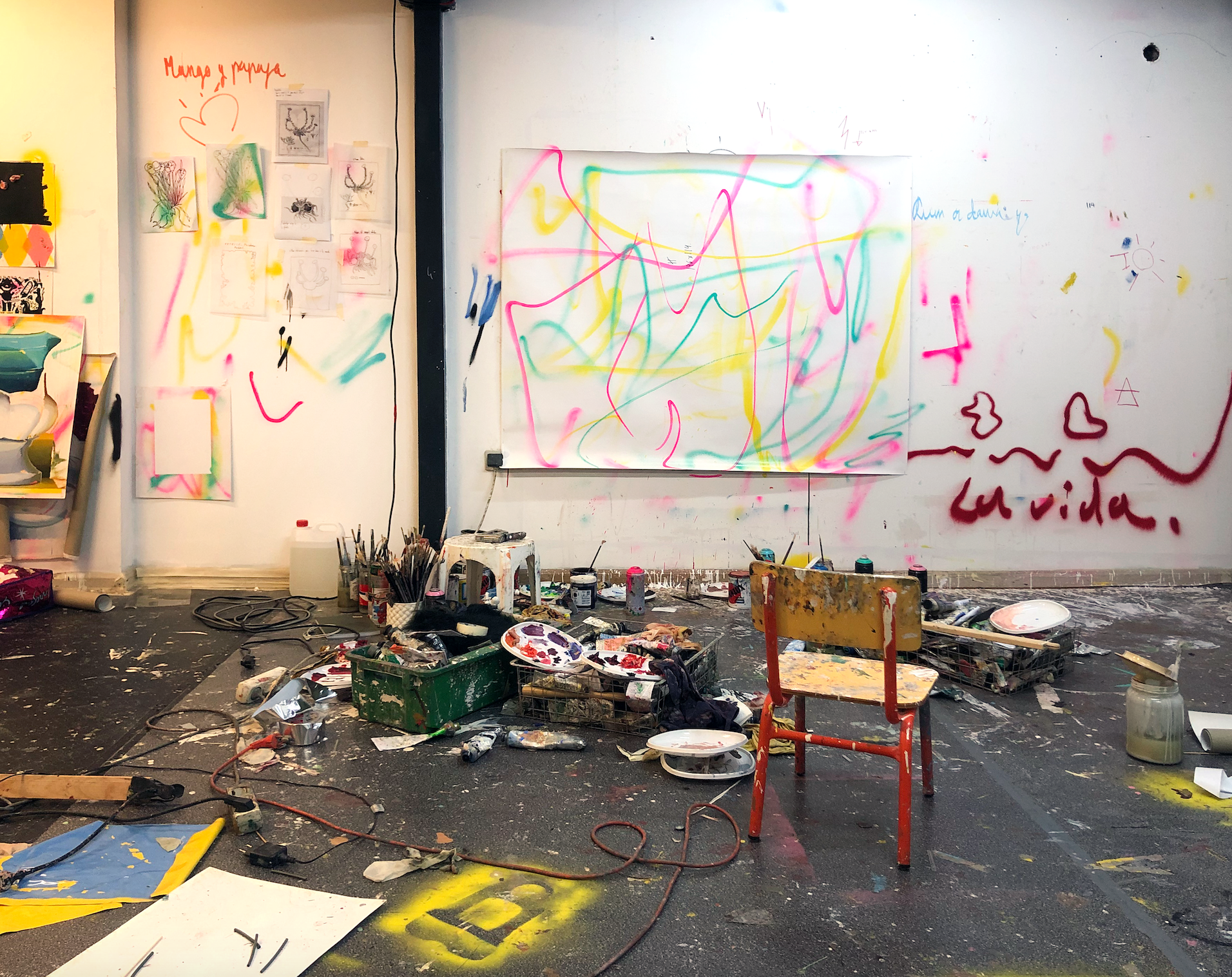 Some sketches and the last painting she’s working on.

«I just got started with this painting», she says about the lines drawn over the canvas in the picture. «Is for the same series. All of them are related to plants, but in some of them I work over the idea of the structure of the plant itself. This work will talk about how to learn to touch. That time when we were young and we didn’t really know what holding hands or kissing meant», she continues. «I feel goosebumps with this project, working over all these ideas right in this moment, with all of what’s going on right now… And even more with the topic of this painting, because let’s see how we overcome this quarantine», she laughs, «it looks like we will come out of this a bit ‘savage’». 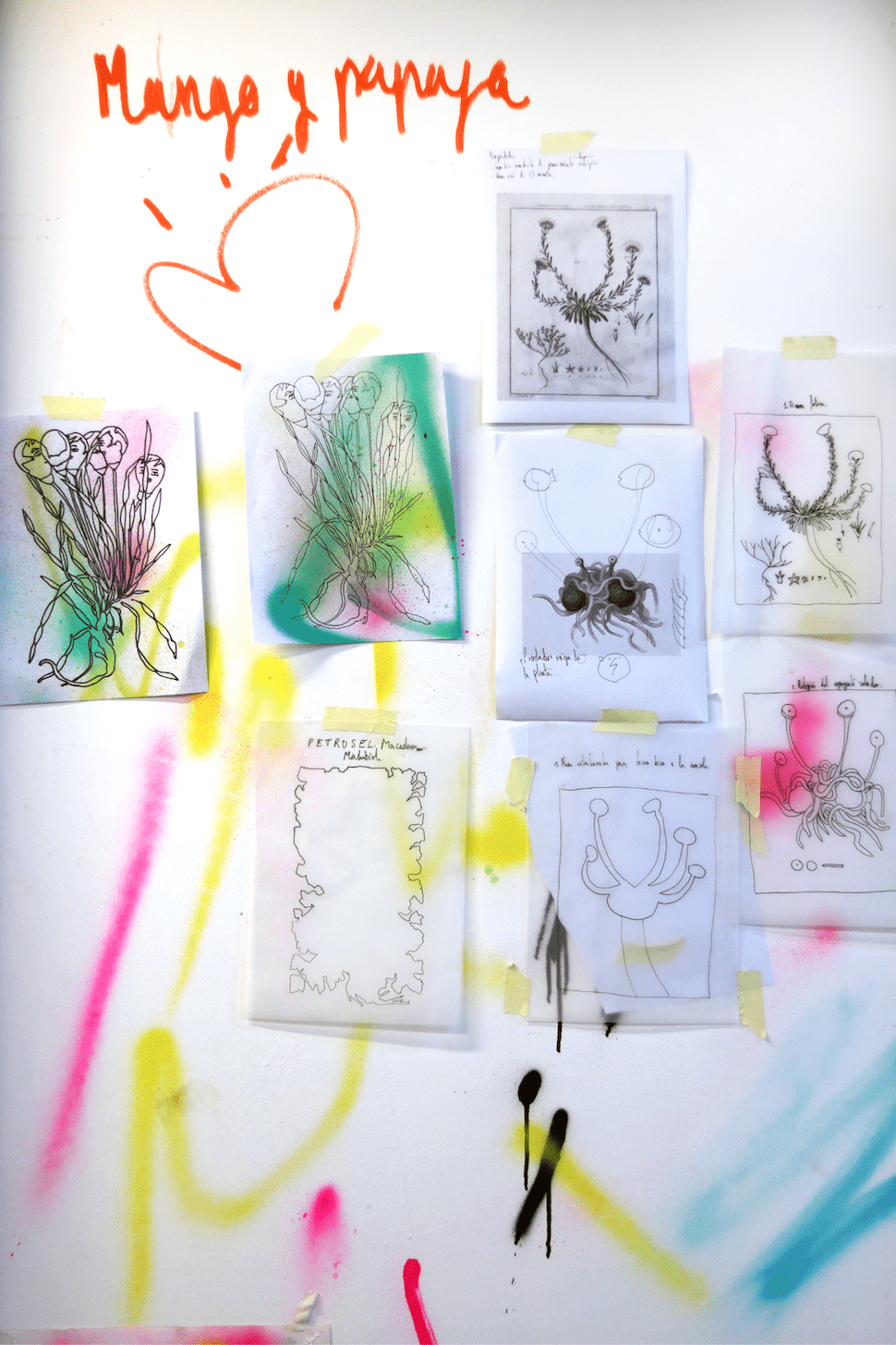 Detail of the transformation process of the Flying Spaghetti Monster.

«These drawings represent the creation of invented plants for the same series. I’m drawing the process of how this plant becomes the Flying Spaghetti Monster’s (or ‘Pastafarianism’) religion symbol, with its complete transition. I just read a lot of crap!», she laughs. «But it’s a real religion, its image is a badge of spaghettis with two meatballs. It’s amazing! The same way that in Christianity we believe that the Holy Spirit appears as a white dove. Why not into a meatball? There’s actually a very interesting book by the scientist and astrophysic Carl Sagan called ‘The World and Its Demons’, that talks about all kinds of religions… More or less surrealistic», Barriga continues. 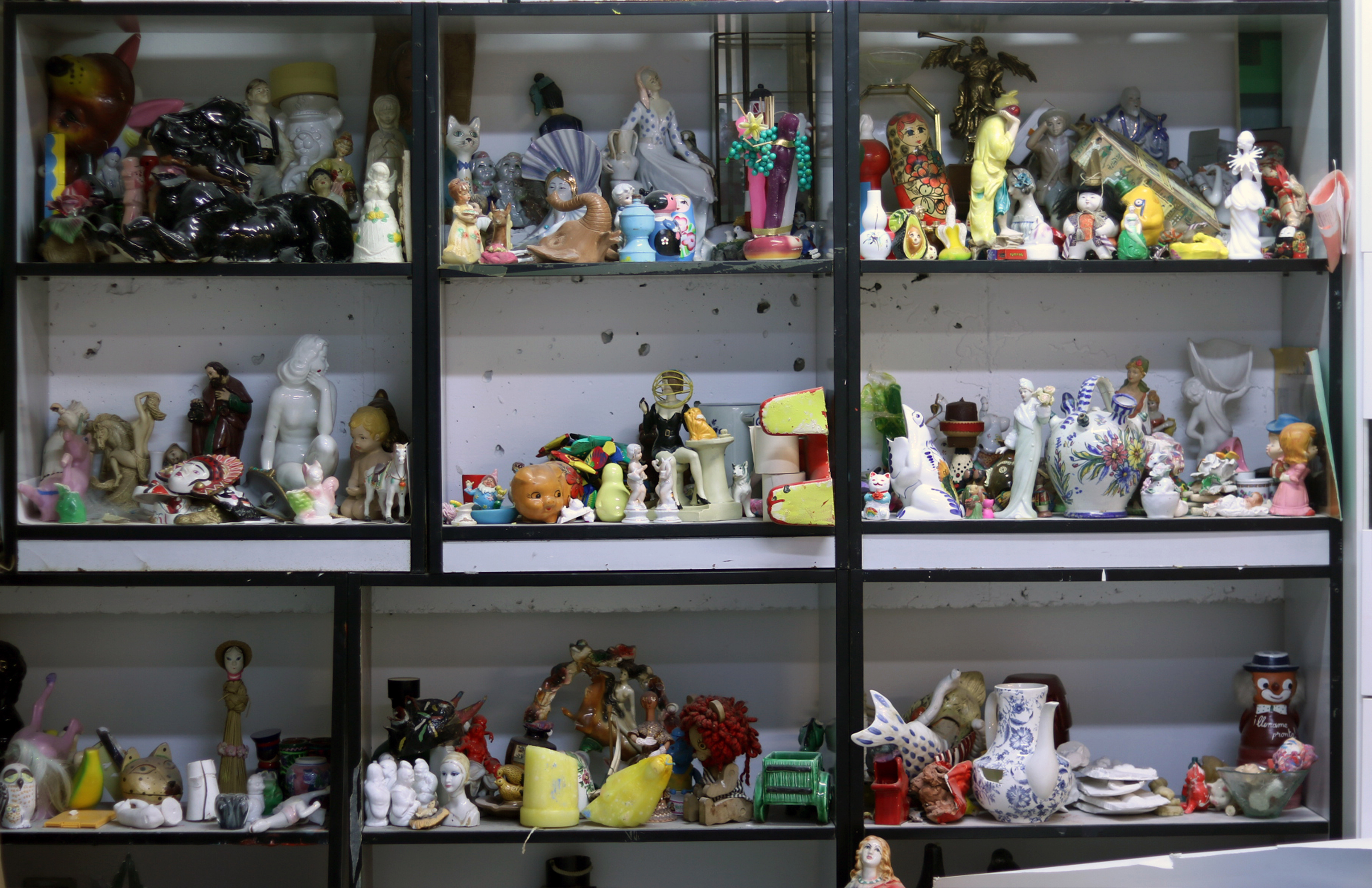 The shelves full of ‘cacharros’ as she called them.

«In this shelf I have all the stuff that I buy in Madrid’s Rastro and in every other street market I’ve visited to paint it after. There’s times I travel just to visit one I specifically like», she tells us about her ‘collecting’ hobby. «Here is where I keep just some them… I have a lot more stored in boxes and at my parents place. When the Diogenes Syndrome starts to flourish I will have to really analyze this!», says Ana as she laughs.

«There is Pepsi, she sneaked into the picture», she says about the cat that has been with her for over six years. «The painting of the woman in red is almost ready, I’m only waiting for some parts to dry to work over it. It’s for an exhibition I had at Affenfaust Gallery in Hamburg at the end of the month. Of course it has also been postponed», she tells us. «The works on the right are again from the ‘Interior Plants’ series. This week I started a workshop with students from the Fine Arts University of Granada, I really like to do this kind of things. I didn’t wanted to cancel so we decided to do it online, trough videoconference open to everyone and I had over 90 students assisting!», she says. 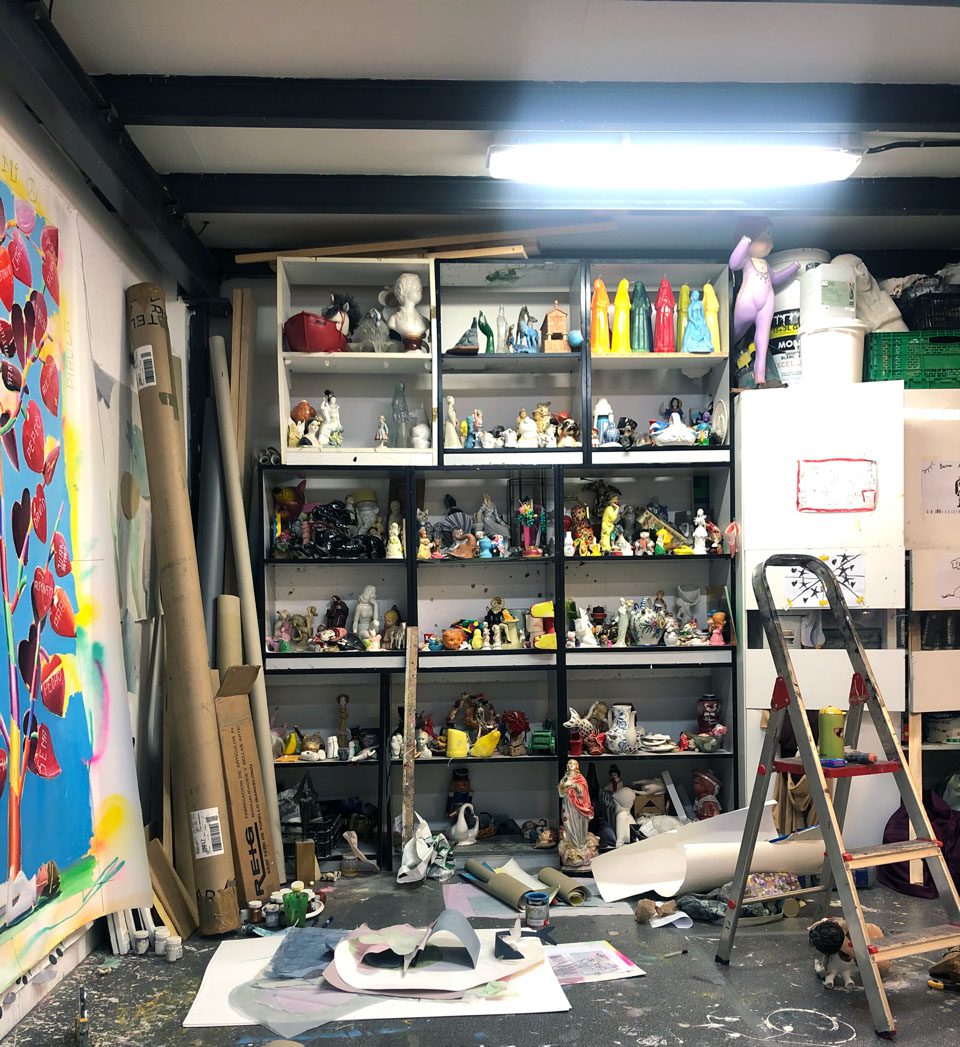 Ana Barriga’s studio has two floors, the lower one is her studio and the upper part is where she lives. «I’ve been here for almost four years. When I arrived I didn’t have any money so I build up everything myself following YouTube tutorials. The lights, the walls… I just did the best I could! Now I have the feeling that it’s a bit too small… Look how messy it is!», she laughs.