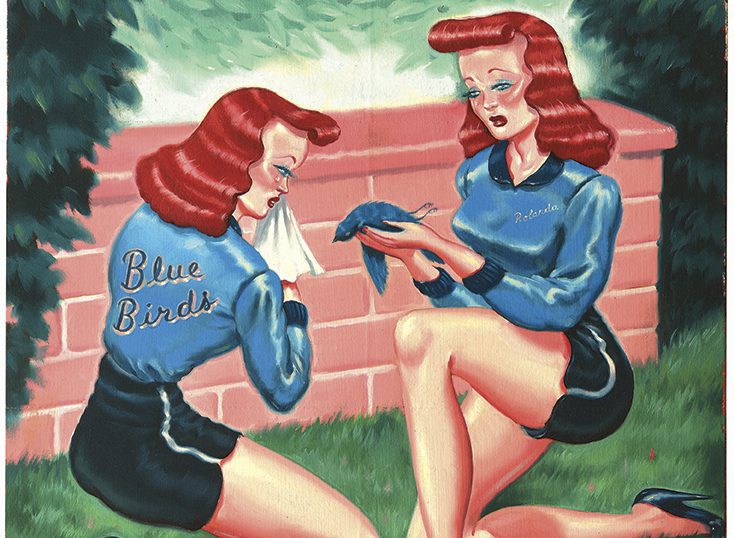 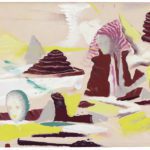 Ryan Heshka (Manitoba, Canada, 1970) grew up watching movies and reading books that were way before his time. The 1930’s was his favorite decade and the original King Kong one of his favorite movies. He liked old comic books and vintage graphics but it wasn’t until his late 20’s when he started doing art and illustration after his studies in Interior Design.

David Lynch, Roger Corman, Stan Lee and other outsider and underground filmmakers and comic artists have been some of his most important references to the vast body of work he has developed over the years including graphic novels, comics, drawings and paintings. Monster-like creatures and other freak characters are part of his imaginary, as 50’s-inspired powerful women armed with their stilettos fill the pages of his ‘Mean Girls Club’ and ‘Frog Wife’ comic books.

His hobby is his career, and other than catching up with his favorite TV shows and bad cinema at night, he enjoys going with his three-year old daughter exploring, picking wild flowers and turning over rocks to find bugs to the forests that surround Vancouver, the city where he now lives and that thanks to the ocean provides him with a mental state of escape.

Last February, Urvanity partnered with Heshka and the urban clothing brand Tiwel to create a limited capsule collection with fantastic characters inspired by pop surrealism, an intricate sense of humor and a visual language inspired by antiquated comics, pulp magazines, classic cinema and science fiction. Click here to check them out and get to know a little more about Ryan Heshka’s inside world.

How did you find this collaboration? Where you happy with the results?

I think it was the best clothing collaboration that I’ve had so far. It was really very smooth and I felt very comfortable working with Tiwel and Urvanity. The collaboration was done with existing work of mine which made the whole process a lot easier for me too. It was really fun the idea of turning paintings into patterns or taking out the background to create figures only. The pieces all turned out really well, the quality is outstanding and the printing was great. 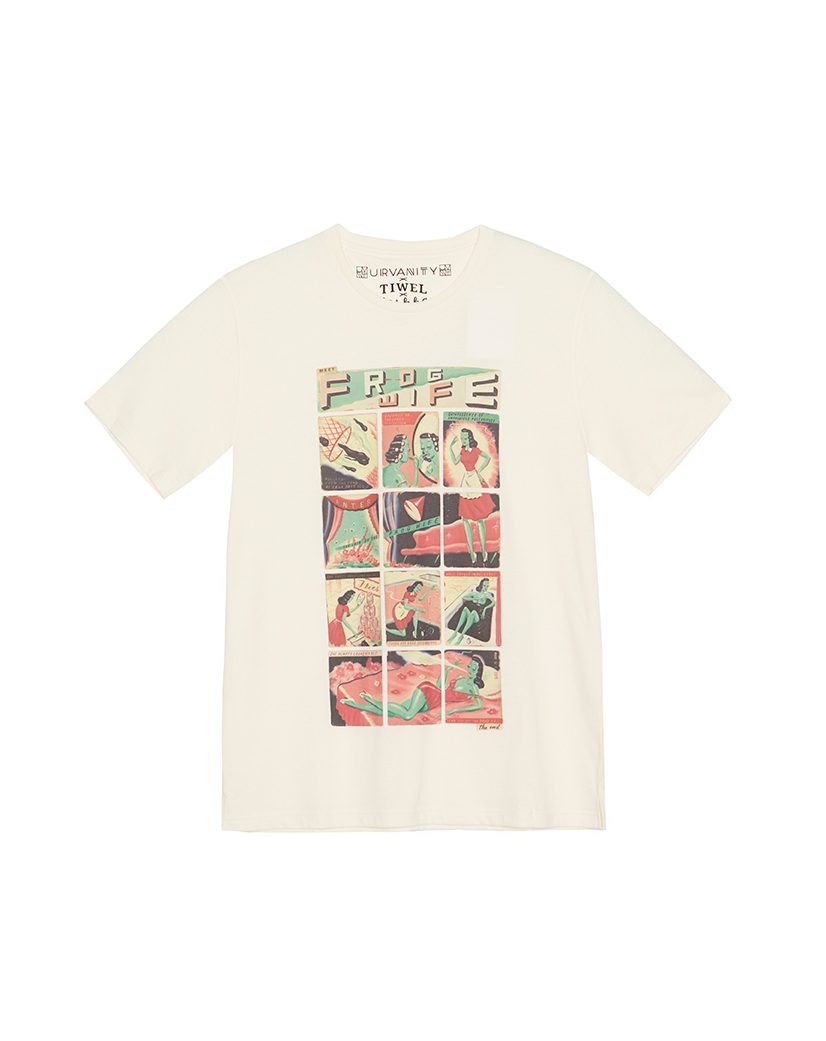 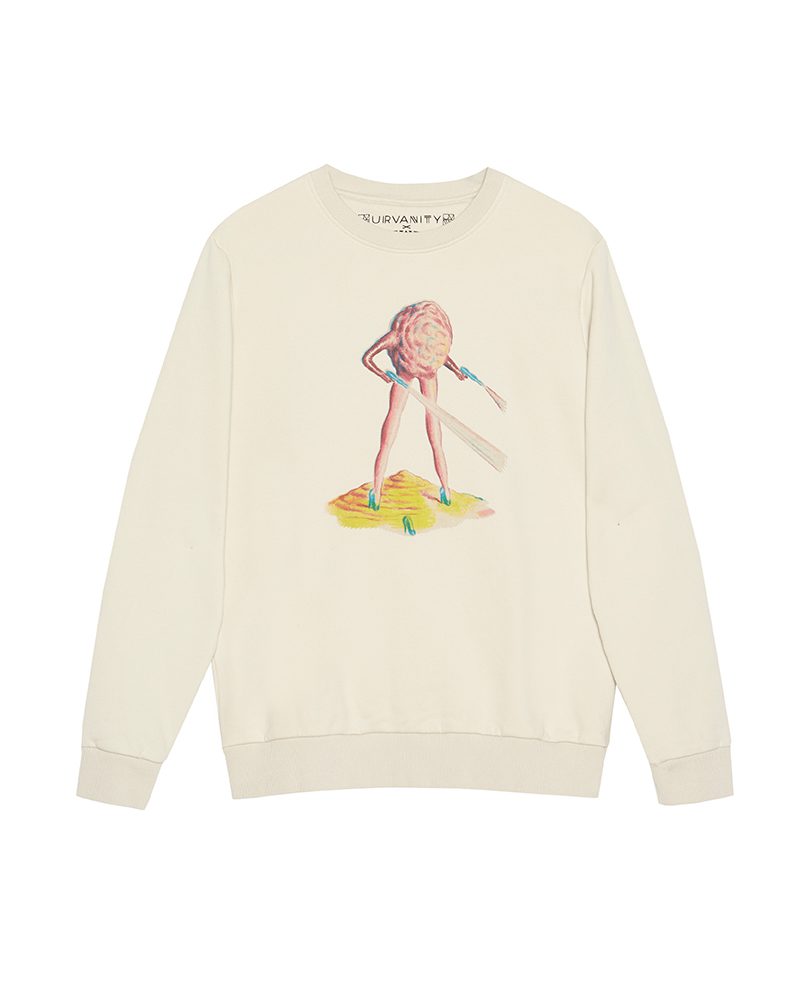 What about the designs chosen for the reproduction, do you have any favorite?

It’s funny because the Meatball was such a weird choice! It came out of a drawing I did for a curator of a show I had in Italy, I just did it as a little gift for her and it’s odd how it ended up being a sweatshirt. In terms of clothing it’s probably my favorite piece, I really like it, first that the sweatshirt is super soft, but there’s also something about the color choice for the background it worked with the strong standalone of the Meatball. I also really like the Glandular shirt, the pattern came out amazingly, I’m getting a few of them to gift! 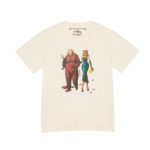 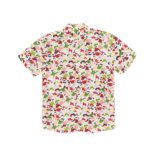 Besides your graphic novels, paintings and drawings and of course this clothing collection, are you developing any other products, like toys for example?

I’m actually working on a toy right now with a Spanish company that’s coming out soon. More like a designer toy, a little sculpture. It’s something I’m interested in doing but the idea of being sustainable is important for me, not just adding a bunch of plastic into the world. It’s hard because I think people are really trying to be more kind to the planet, figure out how to create less waste… But still there is a long way to go for that to happen before its common place.

Your artwork is full of these monster-looking freaks and creatures… Where do you pull them out from?

Over the time this question has made me look more deep into myself, but I think it’s because I always felt like an outsider myself growing up. I felt very self-conscious. I think these sort of weird characters probably come from a place of really not fitting into a mold or a definition. I was very comfortable with my inner world and as I grew older I realized I’m OK not totally fitting in and also looking at the outside world and thinking that’s not something I want to be part of in a lot of cases. Mainstream life doesn’t always resonate very strongly with me. I feel that this resonates with a lot of people more and more, when I had my ‘Freak’ show in LA a lot of people responded very strongly to the work, and when I was painting it was one of the first times that intentionally I was channeling that sort of underconfident and introverted child that I was and still feel that I am deep down. I thought that was just me that I don’t get it but I think there’s more and more people that just don’t get it and don’t want it, they want something different, more authentic or maybe just simpler. That’s me, that’s how it felt. 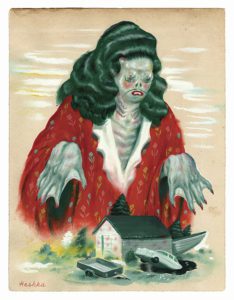 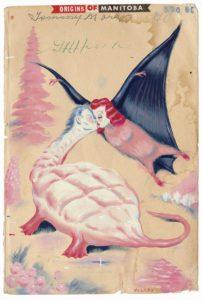 Who are your muses?

When I walk down the street the people that really catch my attention are really unusual looking people that often will end up in my paintings and become my muses. These very offbeat unusual fascinating looking people. I don’t paint them directly but I remember their vibe or their shape, what they were wearing…

Women have a strong presence in your work. What’s the stereotype of beauty that you look for?

When I started working as an illustrator and artist I think there was definitely a stereotype of women that I was drawing, that kind of 1950’s Hollywood sort of glamour. That aesthetic appealed to me and my intention was never the objectification of women. I wasn’t totally aware of that objectification when I started doing more pin up work, that was 20 years ago now and it was a representational work of women from that 1950s era. I think I’ve slowly been moving out of that stereotype and subverting it in Mean Girls Club or in Frog Wife. I kept the look of the 50’s women wearing high heels and a skirt, but the role that they play it’s totally not that. It’s really dominant, subversive… Very anti-authoritarianism. I find myself painting a little bit less of that beauty for beauty sake. Still drawing on the female form for inspiration but twisting it a little bit and trying to move beyond the stereotypical portrayal of women. 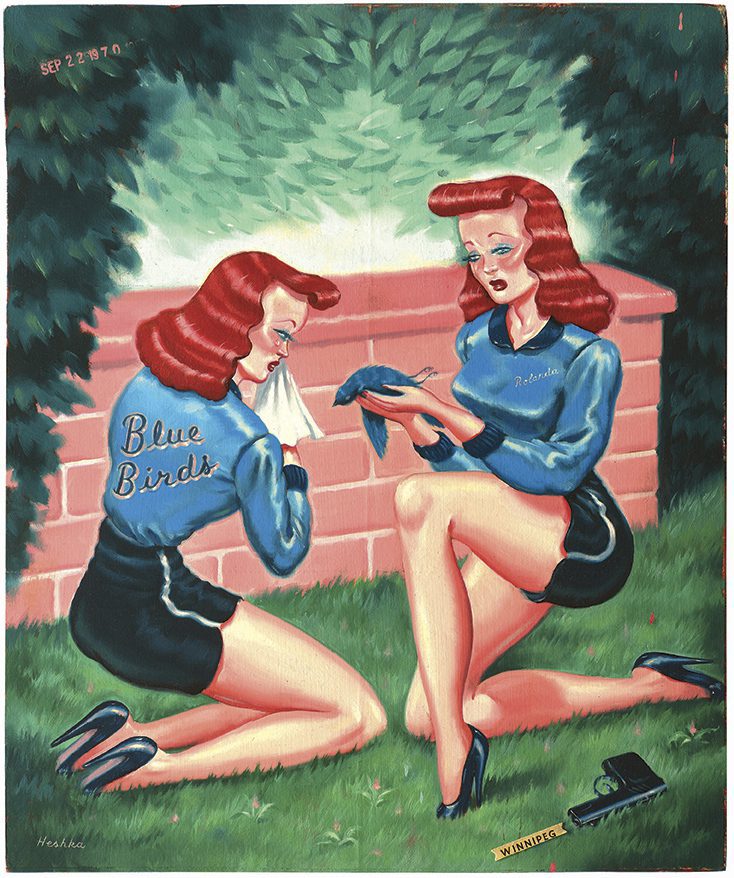 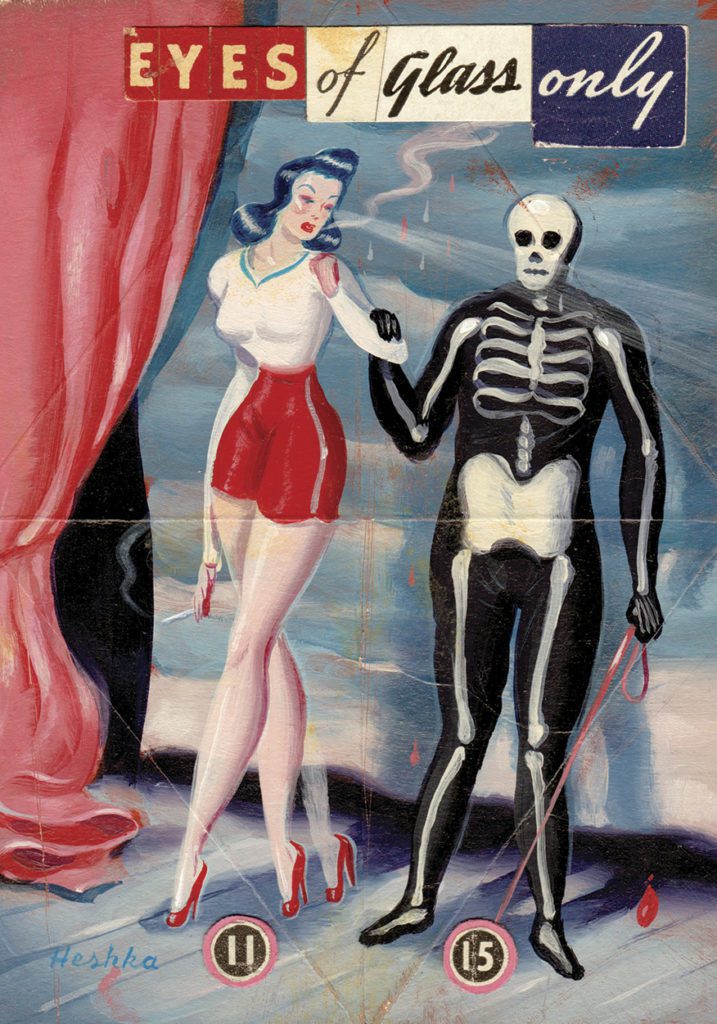 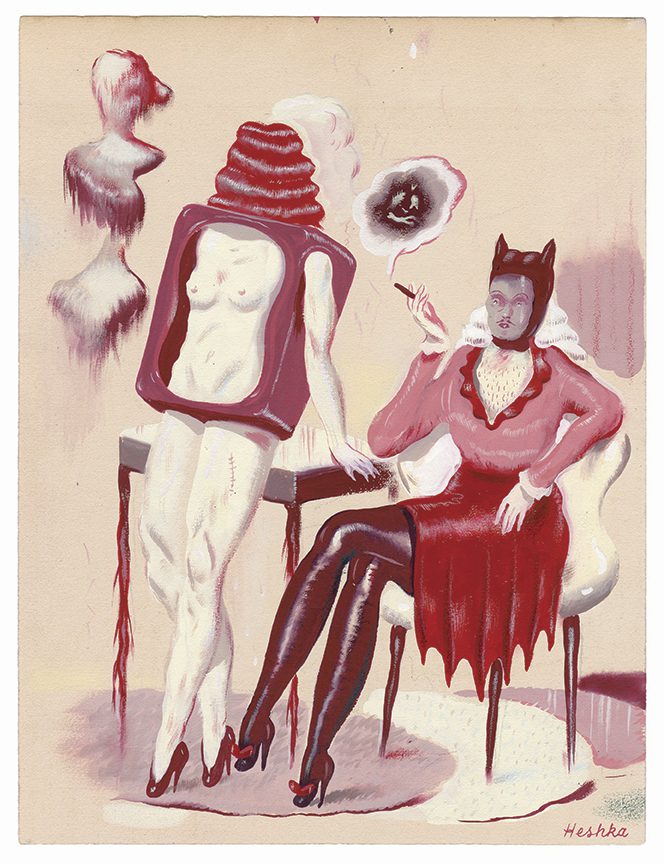 Could you list me a few of your references and most inspiring artists both at an aesthetic and narrative level?

Oh boy, there’s a lot! Filmmakers that I really enjoy is David Lynch which is one of the few artists that fall out of that 1930’s vintage category, although I think his work has some inspiration in it from that era too. I also like a lot of the B-movies, these sort of terrible movies made by Roger Corman in the 1950’s or Ed Wood Junior with “Plan 9 from Outer Space”. I like the honesty that comes from these movies that instead of having a crew of two hundred people there’s just five people working there.

In terms of old comic books I read a lot of the early Marvel comics by Stan Lee and Jack Kirby, I really like the older comics from when comic books first started in the 30’s. Basil Wolverton for example influenced later artists like Robert Crumb and other underground artists with his weird style and weird content. A female comic artist I really like is called Tarpé Mills, she was one of the first female comic artists and she changed her name from June to Tarpé so people wouldn’t know she was a woman, she thought it would detract from her art or that she wouldn’t get hired, you know? She did some wonderful work and there was a lot of female-centric comic characters, like Miss Fury.

Frank R. Paul was an early science fiction artist from the 20-30’s and he was an Austrian architect that went to the US and became the grandfather of science fiction art, he was a really good influence. When I saw his work as a I child I became really infatuated with everything that he did. And again, it wasn’t sort of the best work, or most polished, or technical but there was a real beautiful sense of wonder and there was this mystery his work had that was very odd, sort of almost surreal, I liked a lot these outsider things. 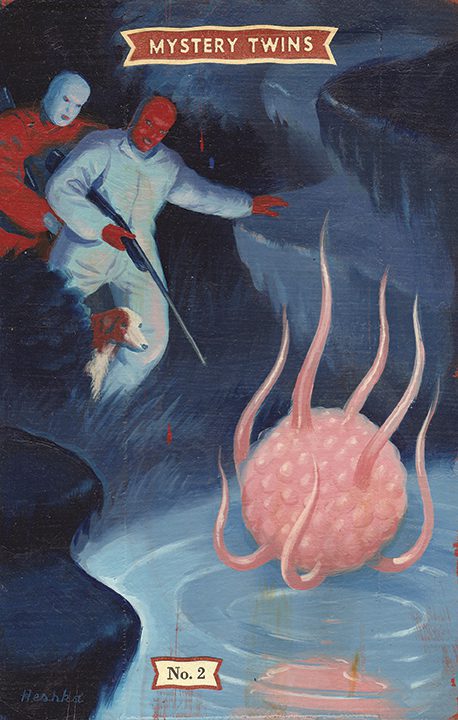 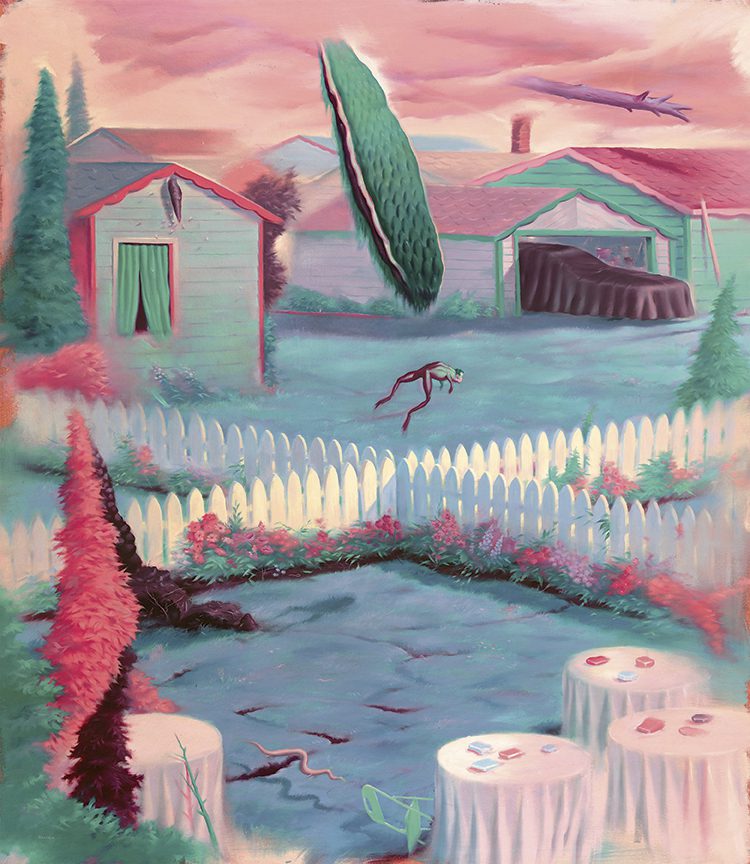 What projects are coming up next for you?

Right now I’m trying to come out with a multiple story for a horror comic. More like a monster – surrealistic – nightmare comic that I want to do and I’m I finding it kind of challenging because, instead of doing a main character as I normally do, I want to do like four short stories that blend together and I’m not quite sure how to structure it. I have the idea for each story but it’s a little bit different, something that it’s certainly going to be a quarantine project. There’s also a collaboration with Marvel, a short comic project I recently did that will be coming out hopefully soon this year. The toy, and other than that I’m really trying to catch up on commissions. I try to keep my schedule open so I can finish the work that I have because I tend to overcommit myself. Trying to work myself out of that bad habit!