Virtual projects we can’t wait to see come to life 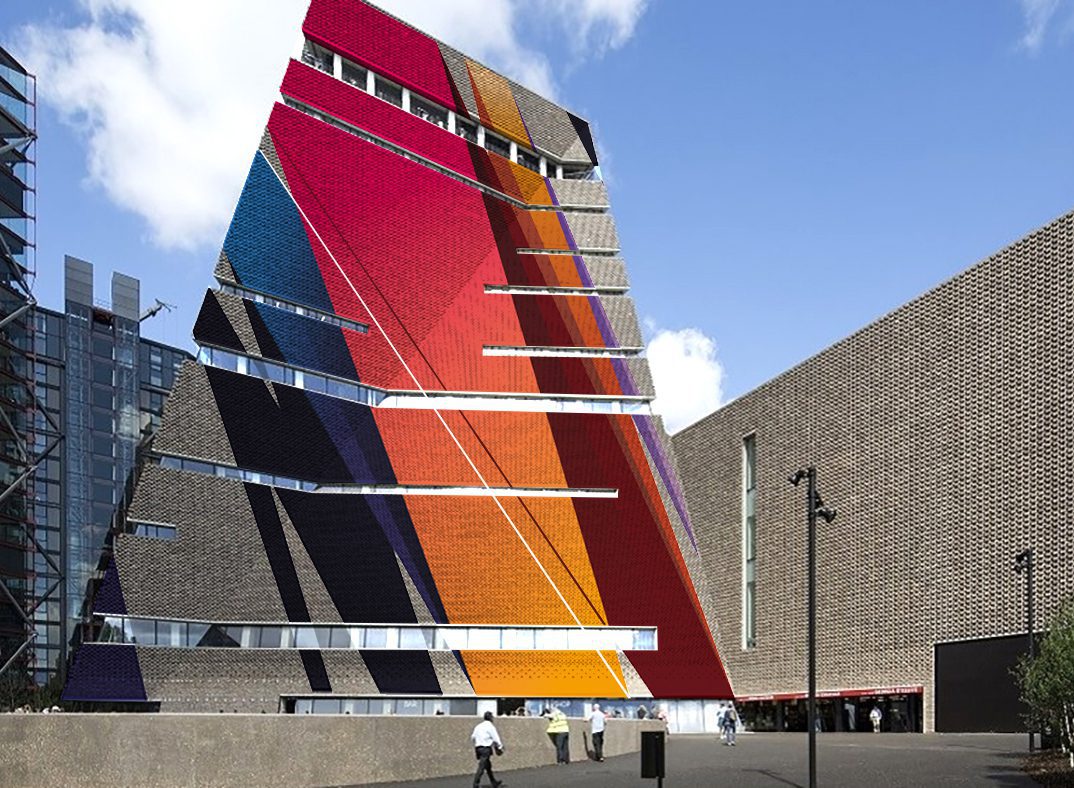 In the recent months it seems that the world has stopped. It has pressed the pause key and has left us halfway. Halfway of our professional projects, halfway of our planned trips, halfway of those wines with friends. Halfway of what was to come. But creativity doesn’t stop and the desire of the artists to continue bringing new projects to life is stronger than ever.

Social media has boomed with proposals and we have compiled some virtual and fantasy projects from a few of our favourite artists. Whether or not they will see the light once the storm has passed is difficult to know. For now, let’s leave our imagination do the rest. 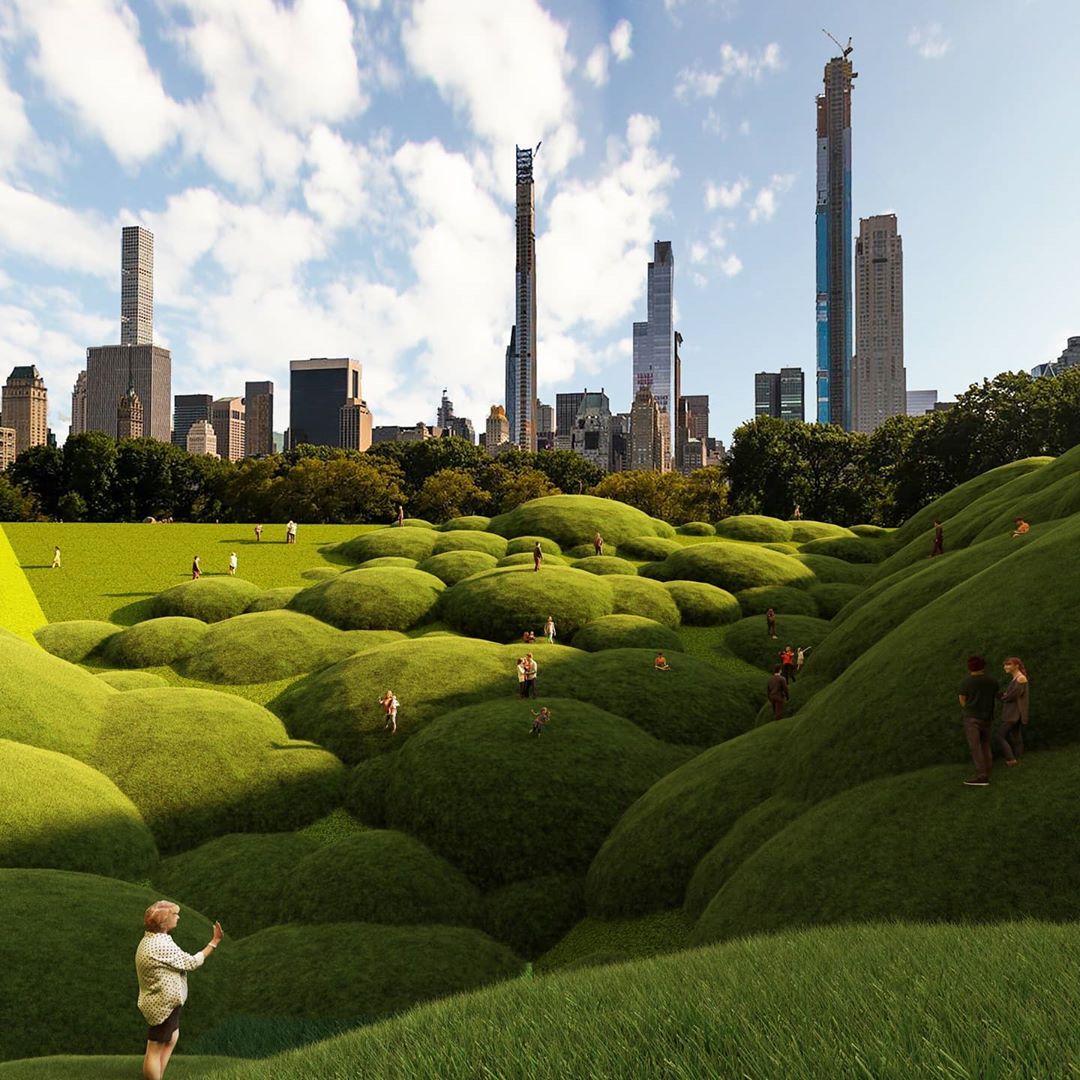 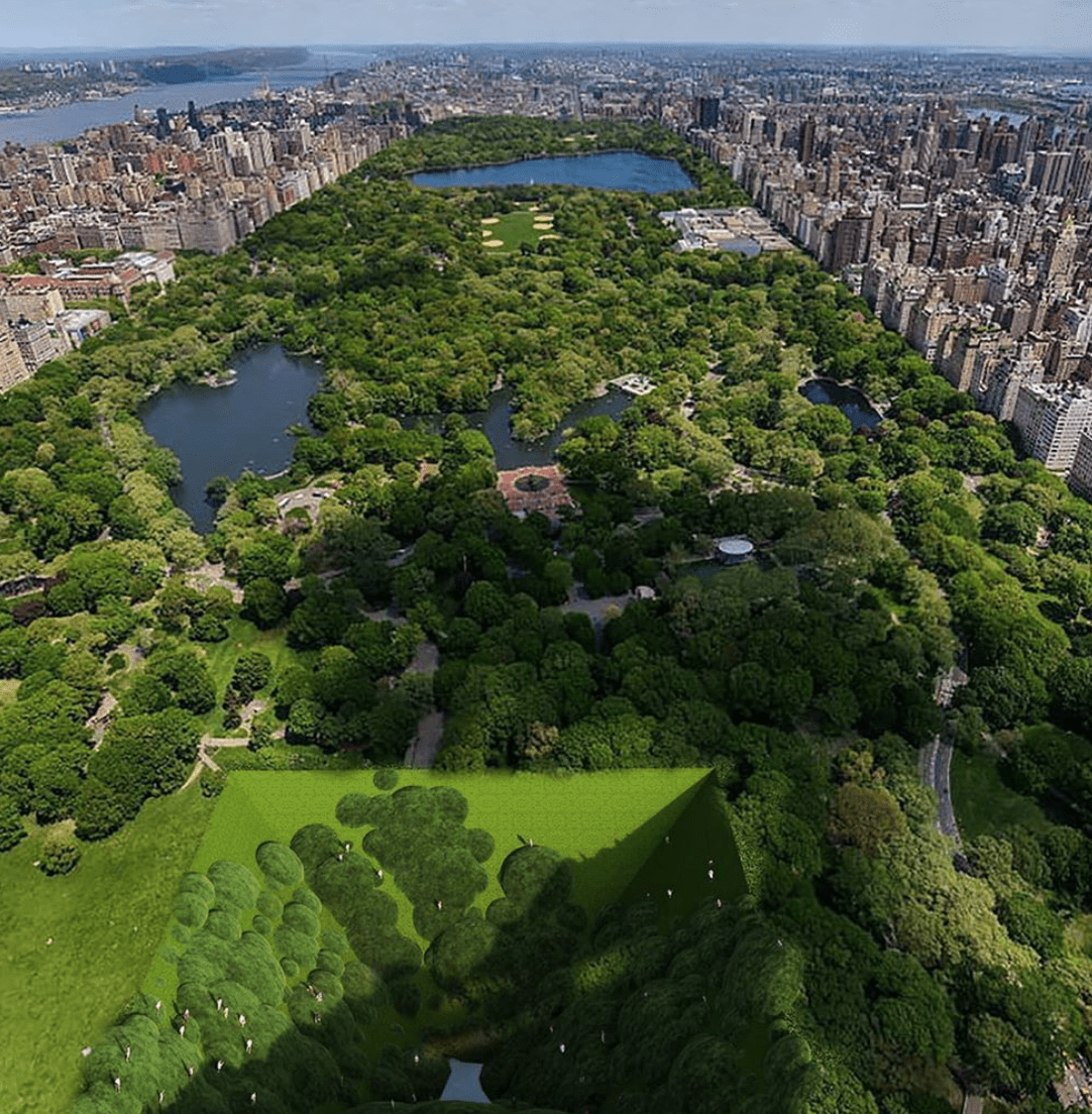 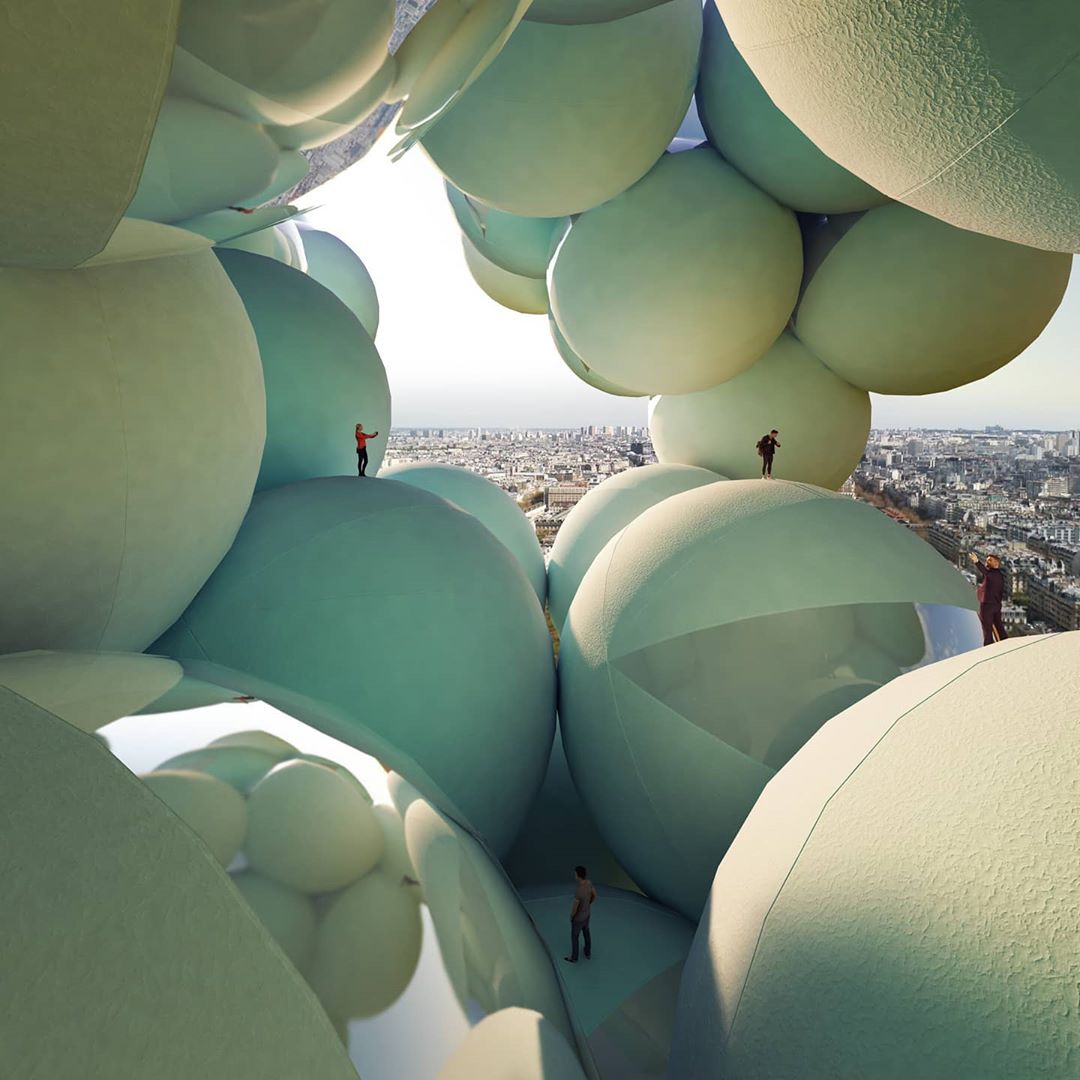 Sky-Park by the Eiffel Tower 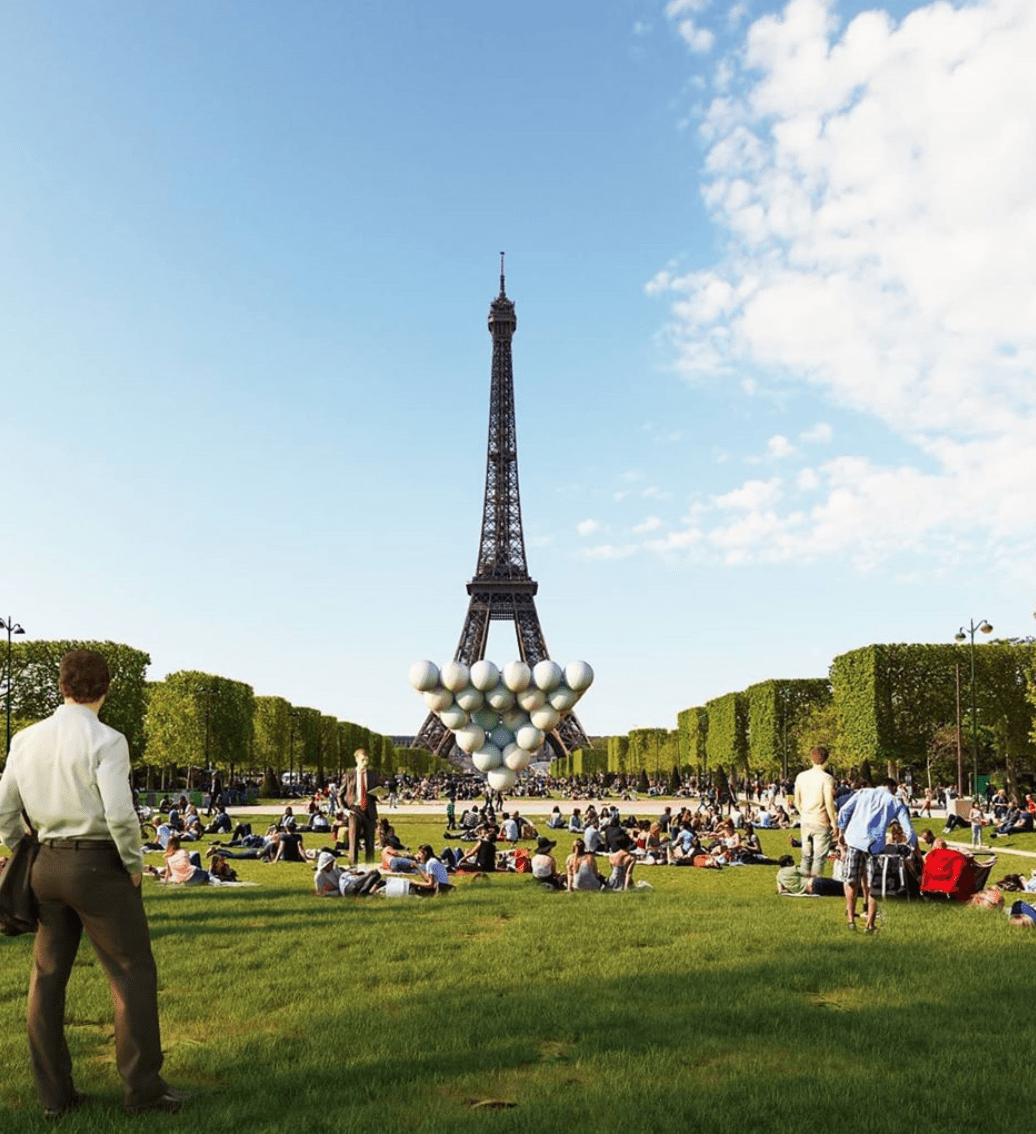 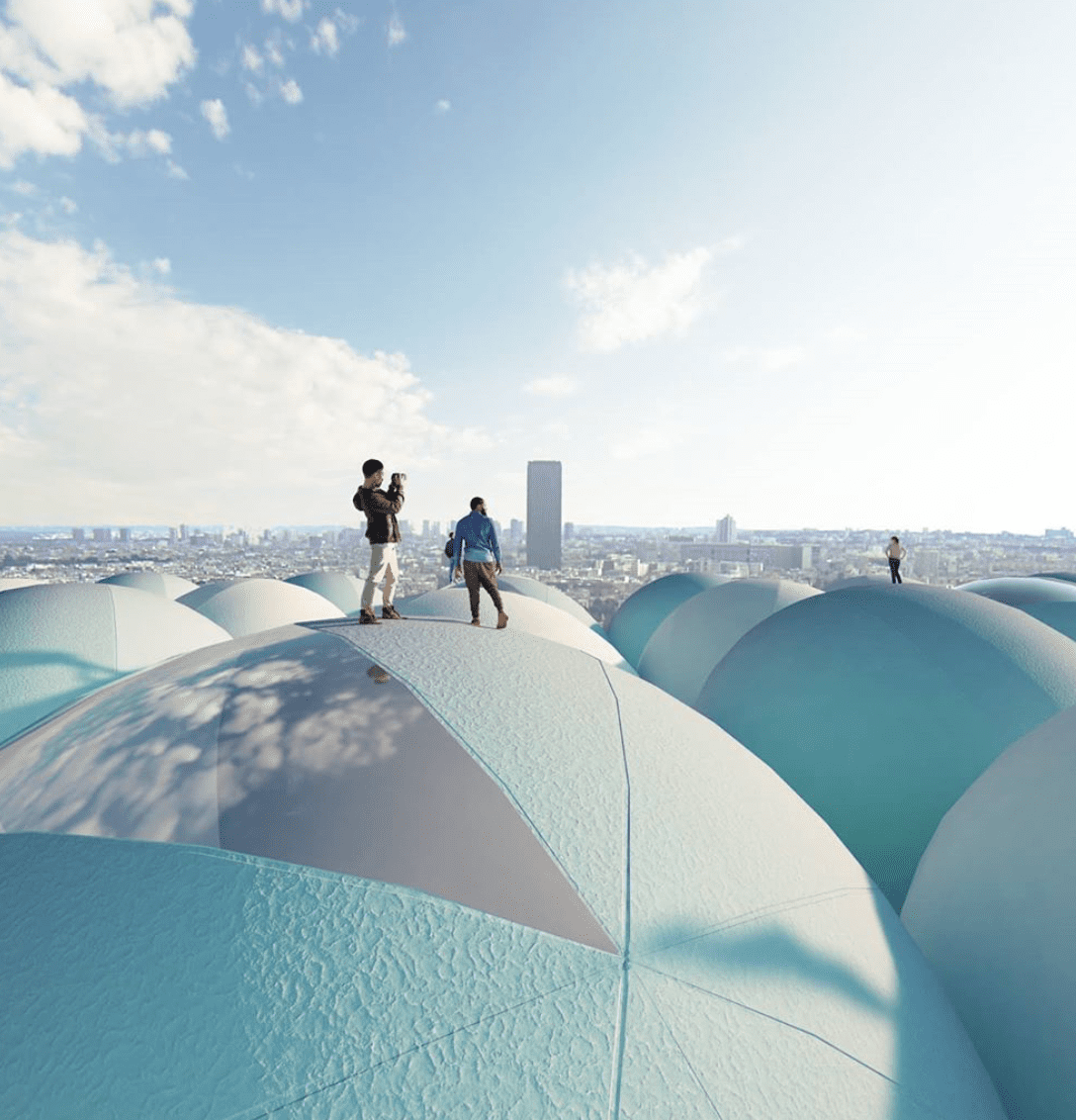 «I was invited by the American artist based also in Lyon, Aramique Krauthamer to participate in an online workshop called “From the Futures“, a collaboration between Columbia School of the Arts’ DSL, Fake Artists, Minkowski and Beautiful Seams about building a future after Covid in different fields, in this case ‘Public Spaces’ (Prototyping Futures to Understand our Present)», says the French artist Cyril Lancelin (Lyon, 1975) known for his large scale and immersive installations about the context of the digital projects he has developed. «I did them for fun, it was the perfect moment to think about crazy projects», continues. Sky-Park by the Champs Elysées in Paris and Sub-City, an underground pyramidal park space in the heart of Central Park New York are the two projects he has developed and shared during the workshop.

He and Aramique designed them considering one fact: Populations are growing but public spaces are not, «housing is getting smaller and smaller. Cities are getting denser. Public spaces aren’t enough to accommodate growing populations. Parks, like Jardin des Tuileries in Paris, were designed almost 500 years ago. They’re now obsolete at dealing with the scale of current populations», says Cyril. «I would love to create Sky-Park, it could be possible to do a small one. I like the idea of it being attached to another building, in this case the Eiffel Tower, and to enter the installation from the top. Here the access is planned from the first level of the Tower», continues. «I like to draw shapes that will surprise people, and a pyramid upside down was perfect. Sub-city, the inverted pyramid park could be done as well» says the artist. 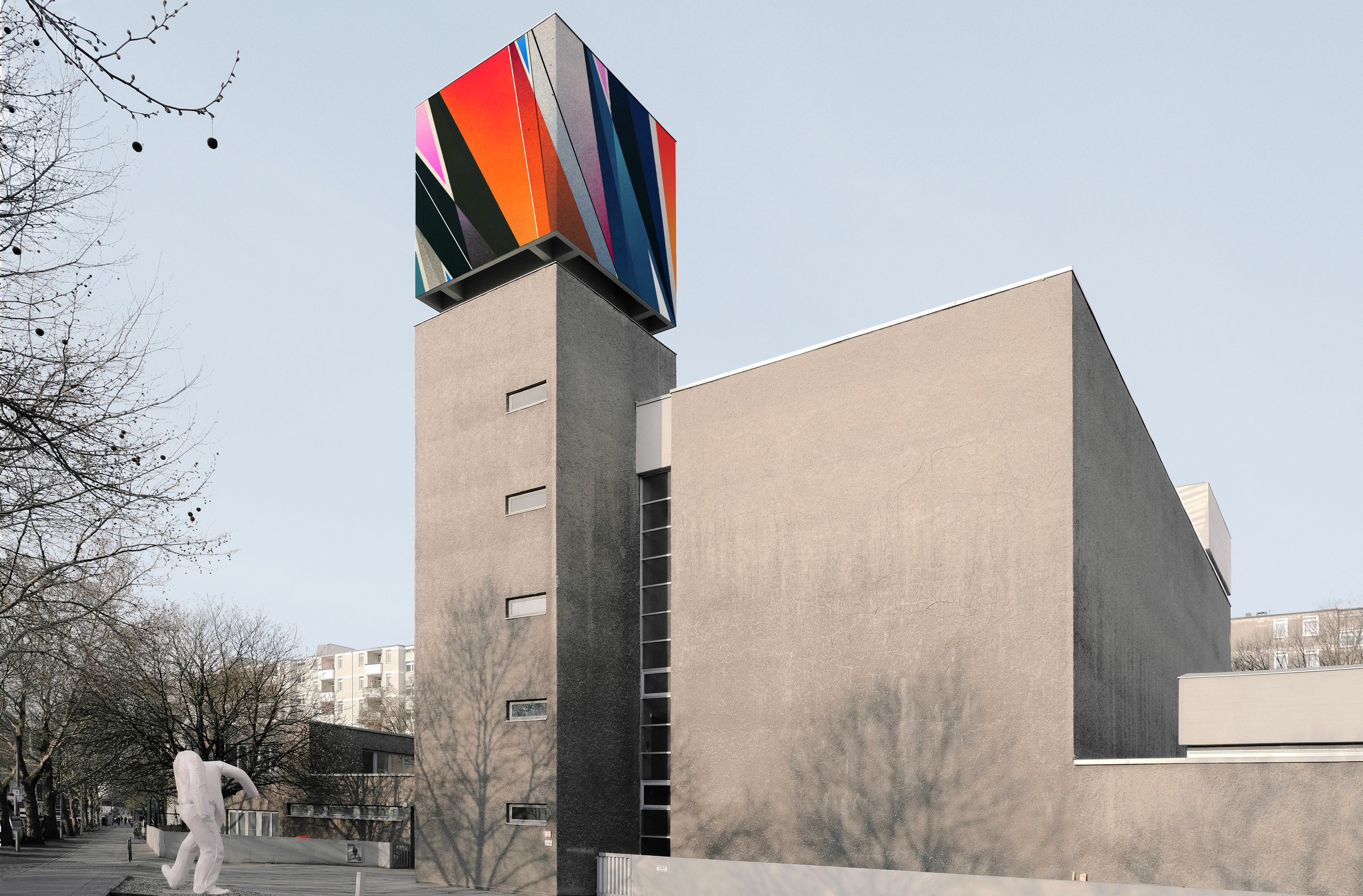 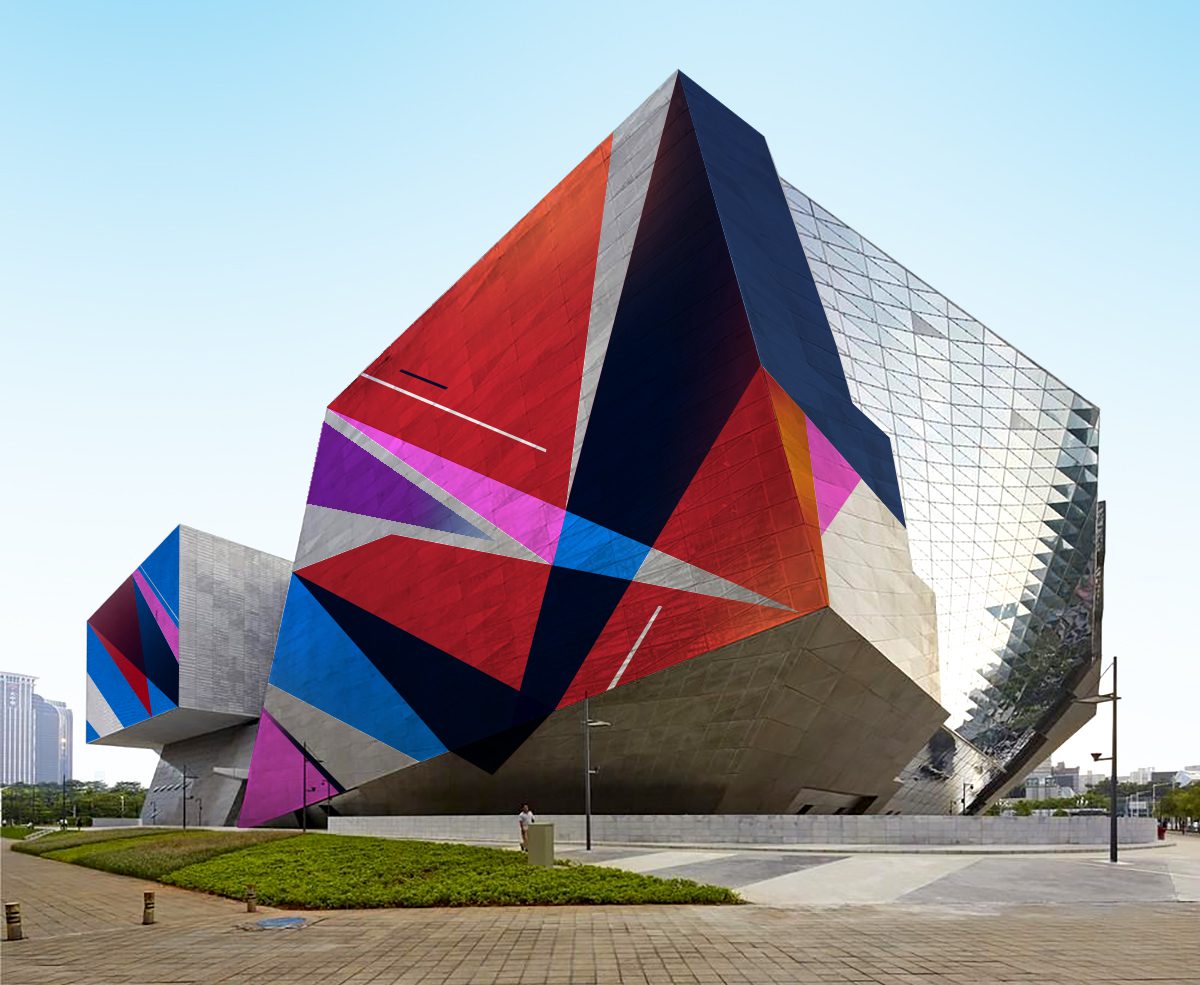 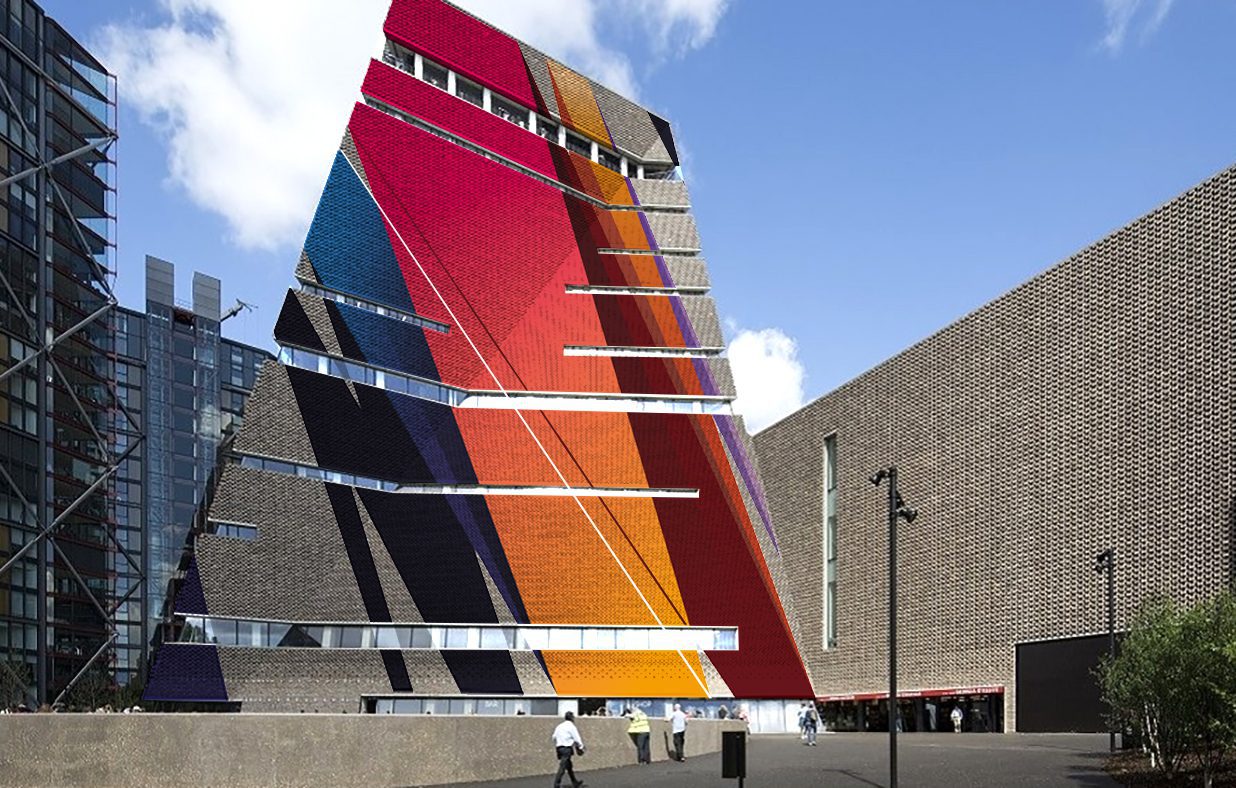 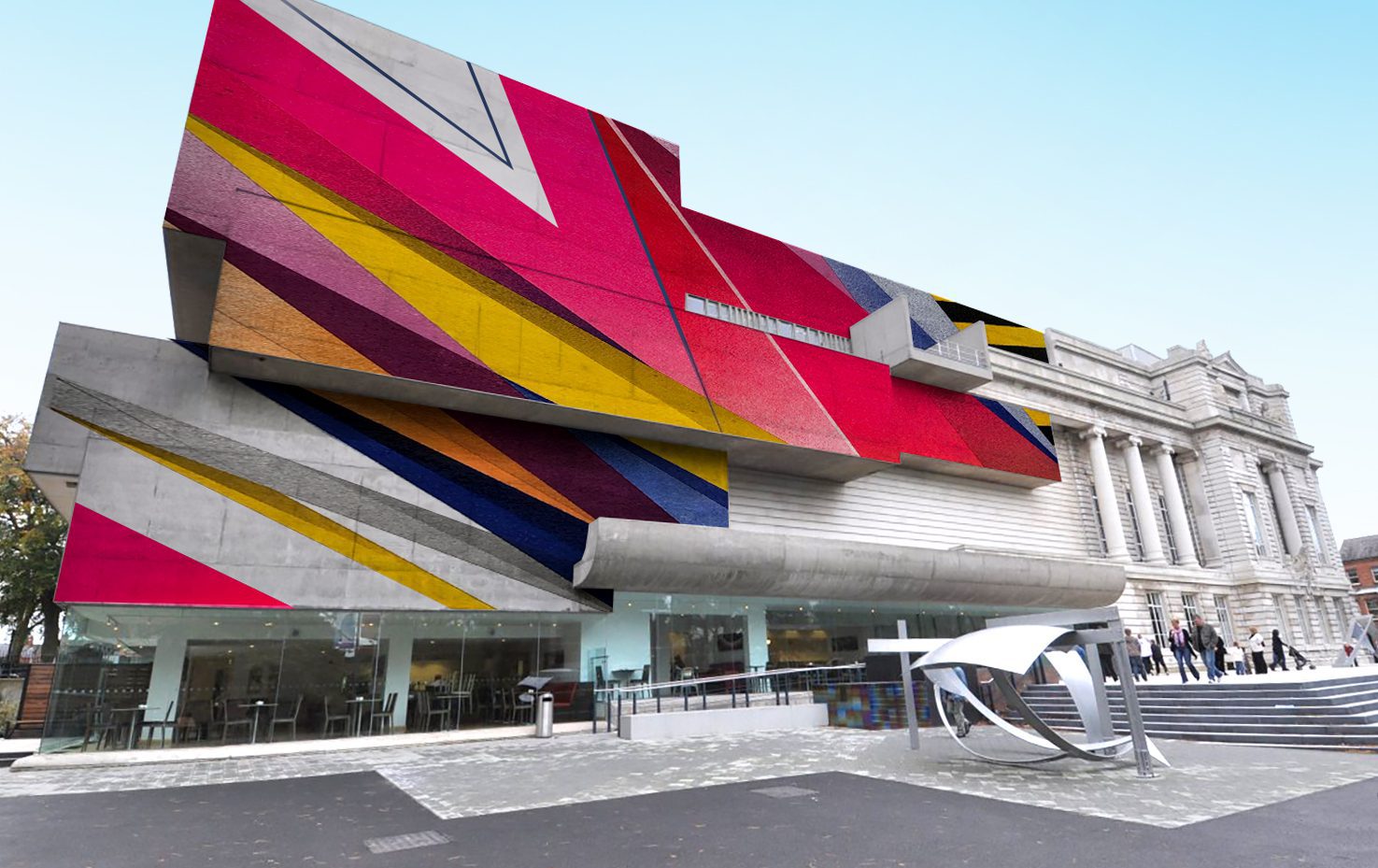 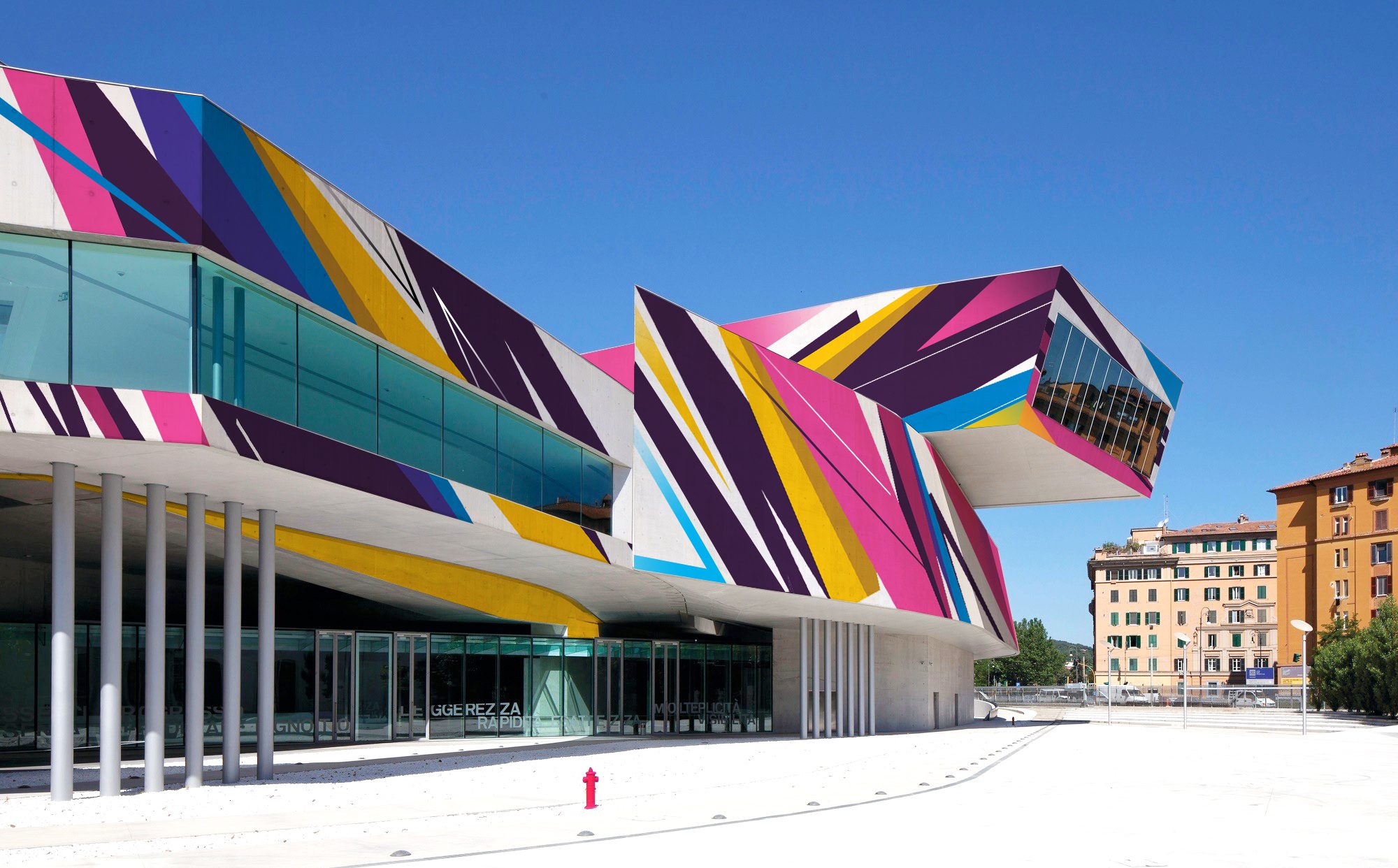 «Actually I can’t take the credit for the idea… I saw my friend and studio neighbour Ian Davenport make a fantasy animation of his work on the sides of the Guggenheim Museum in New York and thought I would do my own», says the British artist Remi Rough (London, 1971), one of the most recognized post-graffiti talents, when asked about how the idea of the Fantasy Projects with his own designs started on his Instagram. To date he has posted some amazing interventions on museums, artistic foundations, villas and other exquisites architectural spaces.

«I think the one I would most like to make happen is the cube on top of the Koenig Gallery in Berlin. I just think it would be an amazing statement. Kind of like a full stop and the Tate Modern obviously…», he continues. One of the photos that he has shared is a real proposal for a project he’s working on (although he can’t reveal which one!) and he has been approached by an architect firm in New York about a possible project next year after posting the pictures. «I spent quite a long time researching great buildings and architects, I made some amazing new discoveries along the way and tried out many different ideas. I have 6 or 7 different versions of some of the buildings and a huge folder on my desktop that keeps getting bigger and bigger every day!», says Rough. 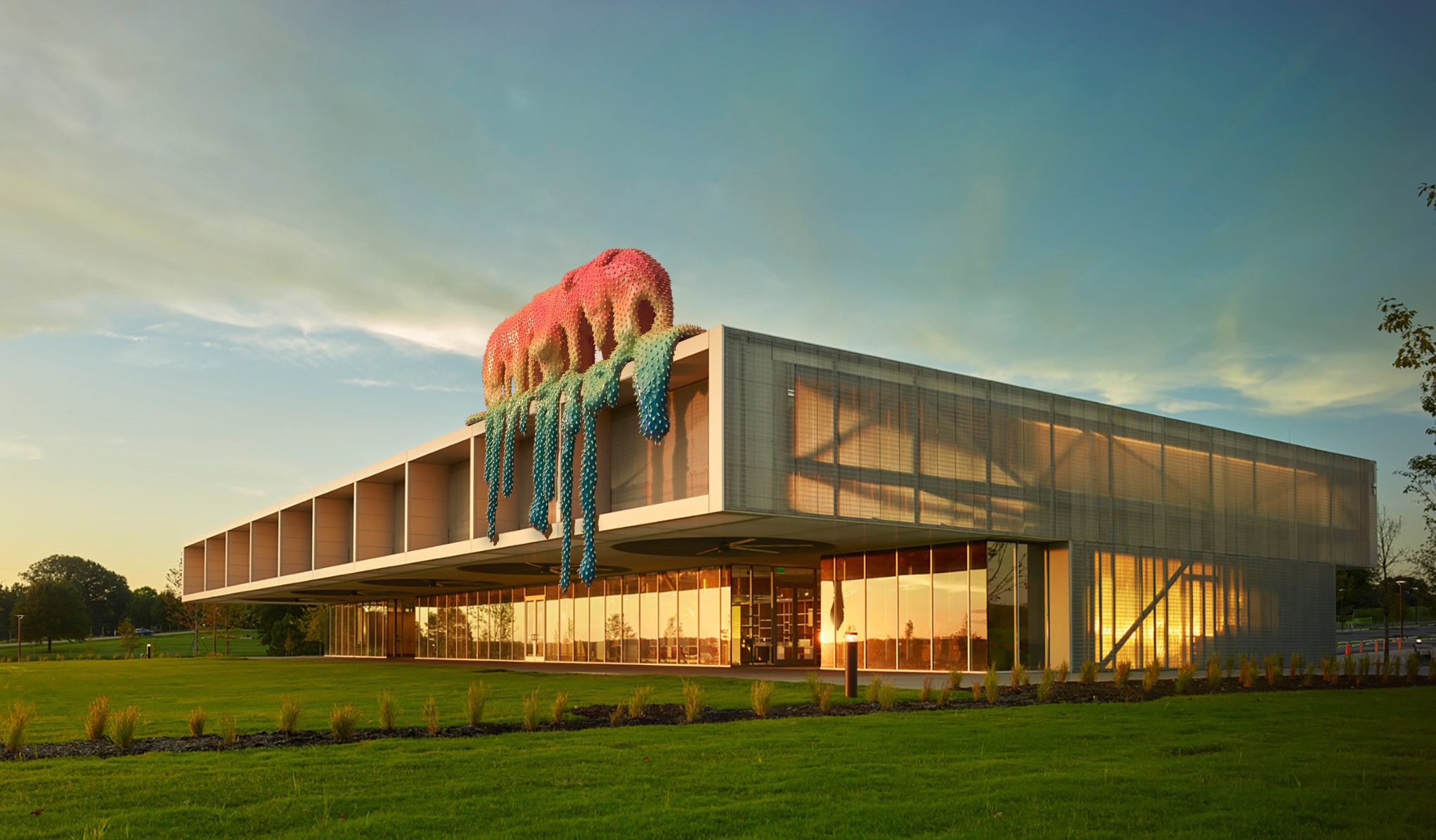 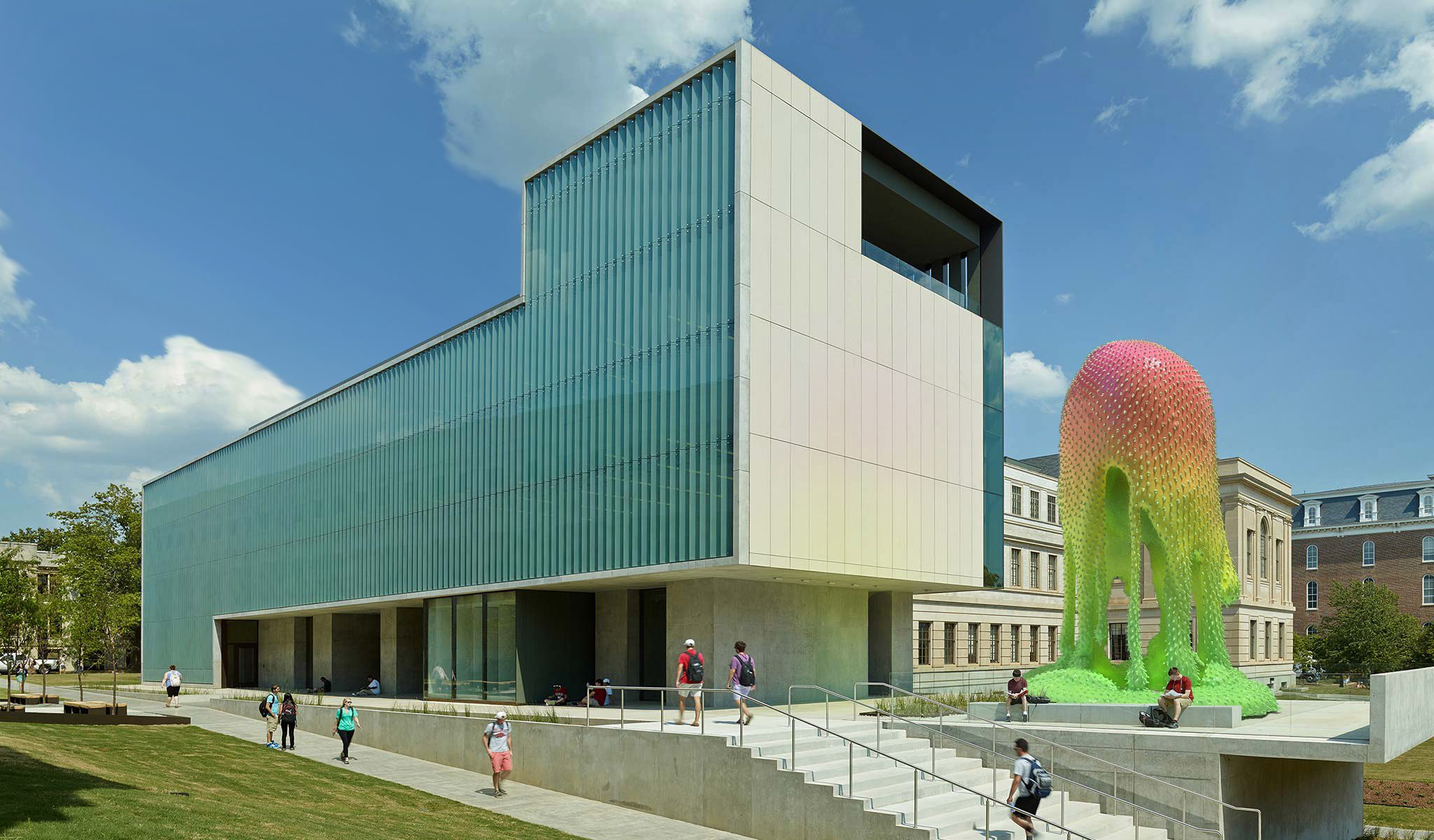 Dan Lam (Manila, 1988) lives and works in Dallas, USA, and is known for her drippy and bubbly sculptures made out of polyurethane foam, acrylic paint and epoxy resin that play in between the ugliness and the beauty of shapes, textures and colors. She normally works small and medium size sculptures and so far she has two large scale sculptures in public spaces, one in Boston and a second located at Industry City in Brooklyn, New York. But these days she shared on her feed two new ‘dreaming big’ projects, «the big drip is on the Shelby Farms Park Visitor Center in Tennesee and the big squish is at the Steven L. Anderson Design Center in Arkansas. Both buildings were designed by Blackwell Architects», she says. After sharing them she has received a very good feedback, «I’ve had a ton of interest in the idea and a few that are ready to make it happen. Putting the images out there really helps people see it as real and I feel like the pieces are falling into place for them to come to fruition. With bigger ideas like this, I expect it will take time so I’m happy to plant the seeds now and wait for it to grow. I absolutely see them as possible and aim to make it happen, it’s just a matter of time», she continues. «As for future large scale pieces, I have a couple of projects in the works. One is here locally in Dallas, TX but with the current COVID situation, things have been put on hold», she says. 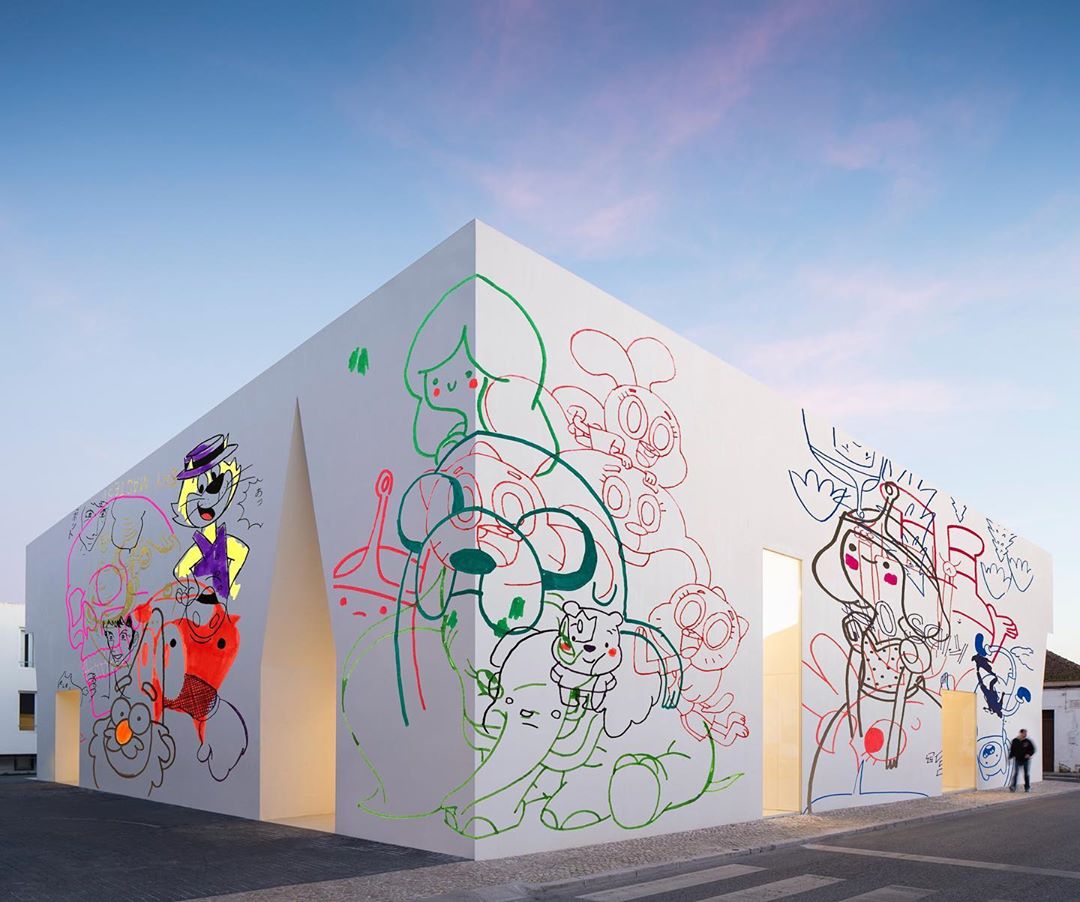 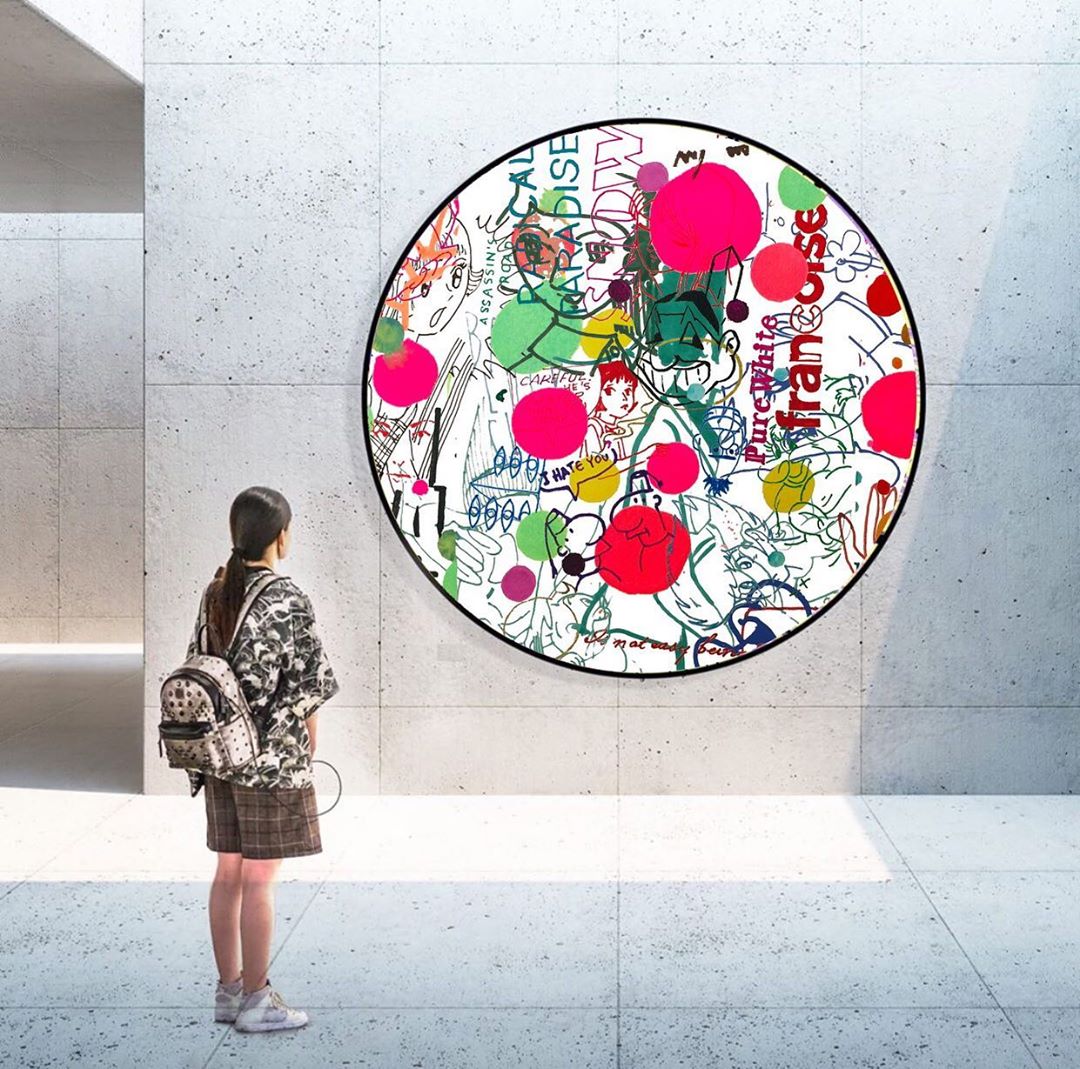 Collage on an artwork 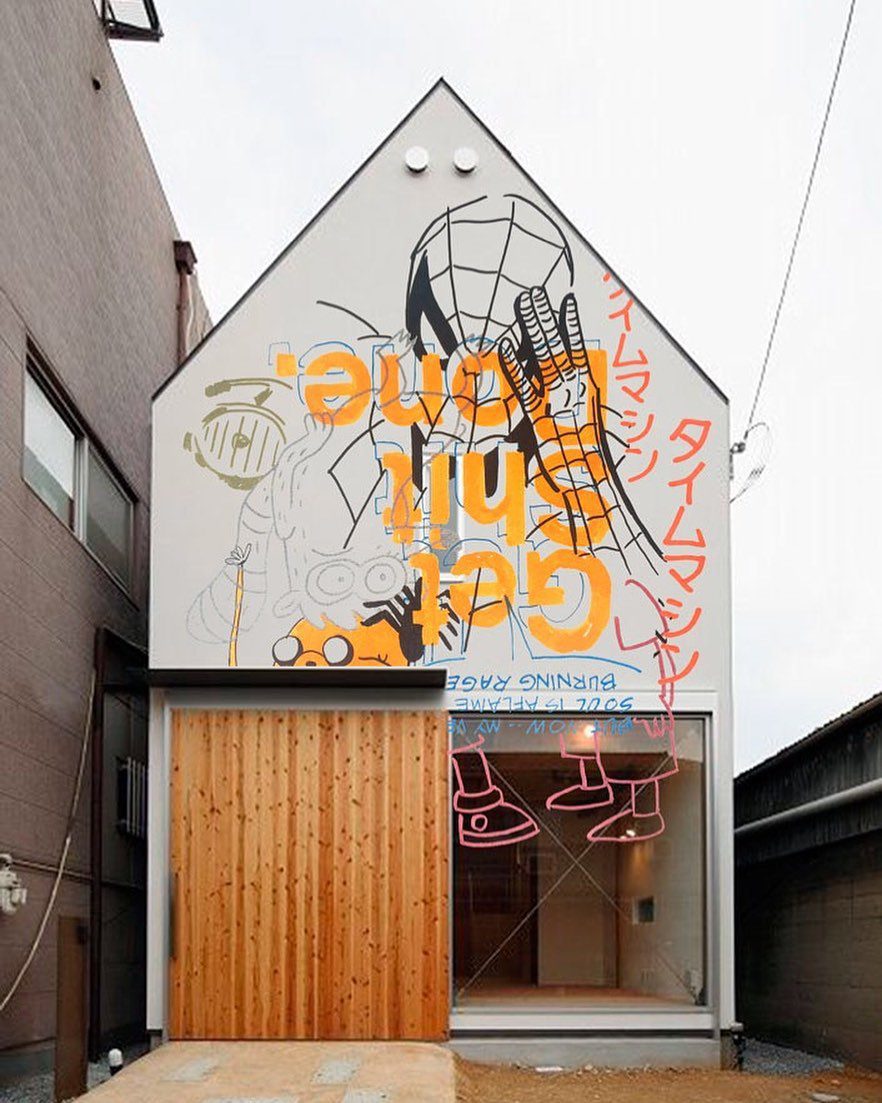 Sketch on a Japanese house

«If you look back on my Instagram it is something I’ve been doing forever, I started when I was in Uni» says the Basque artist Judas Arrieta (Hondarribia, 1971) about the sketches and fake collages that he designs on different architectures, specially Japanese, and posts on his social networks. «One of my goals has always been for my art to be everywhere and I used collage to expand this work of drawing study. In the 90s, if you went out on the street and painted, you risked the same things that you face today, but for me it meant a way of showing how work can expand and create new realities. I look for buildings that fit what I need and I intervene in them, but I also do it on T-shirts, trucks, design rooms were I put my paintings… Nowadays everyone does it», he continues.

«I reflect on how we are consuming images, that bombing of images we now naturally assume and on how anything you see on a screen it becomes true for the person who watches it, when many times we are wrong, not everything we see it’s true. These collages create a sensation within the viewer, that doubt, what is true, what is a lie… On Instagram, the material is for fast consumption and part of my work is focused on feeding that beast», says about the differences with the work he presents on his portfolio or his website. «Despite having been doing this for years, the truth is that this is the natural work process, when you have a commission you first make the sketch and then paint that wall. It has never happened to me the other way around, that someone commissioned me to design what and where I imagined it while doing it, although it is through these sketches that different works have come out inspired by them», he concludes. 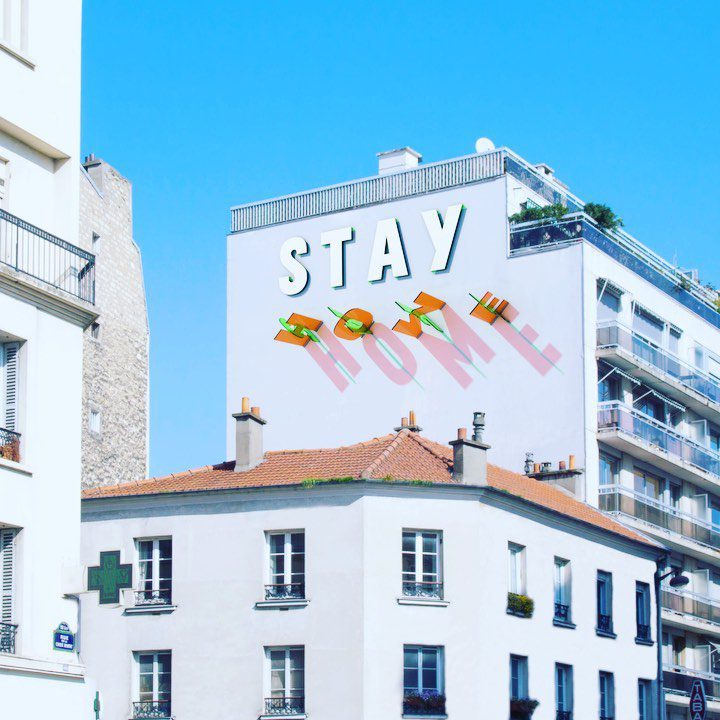 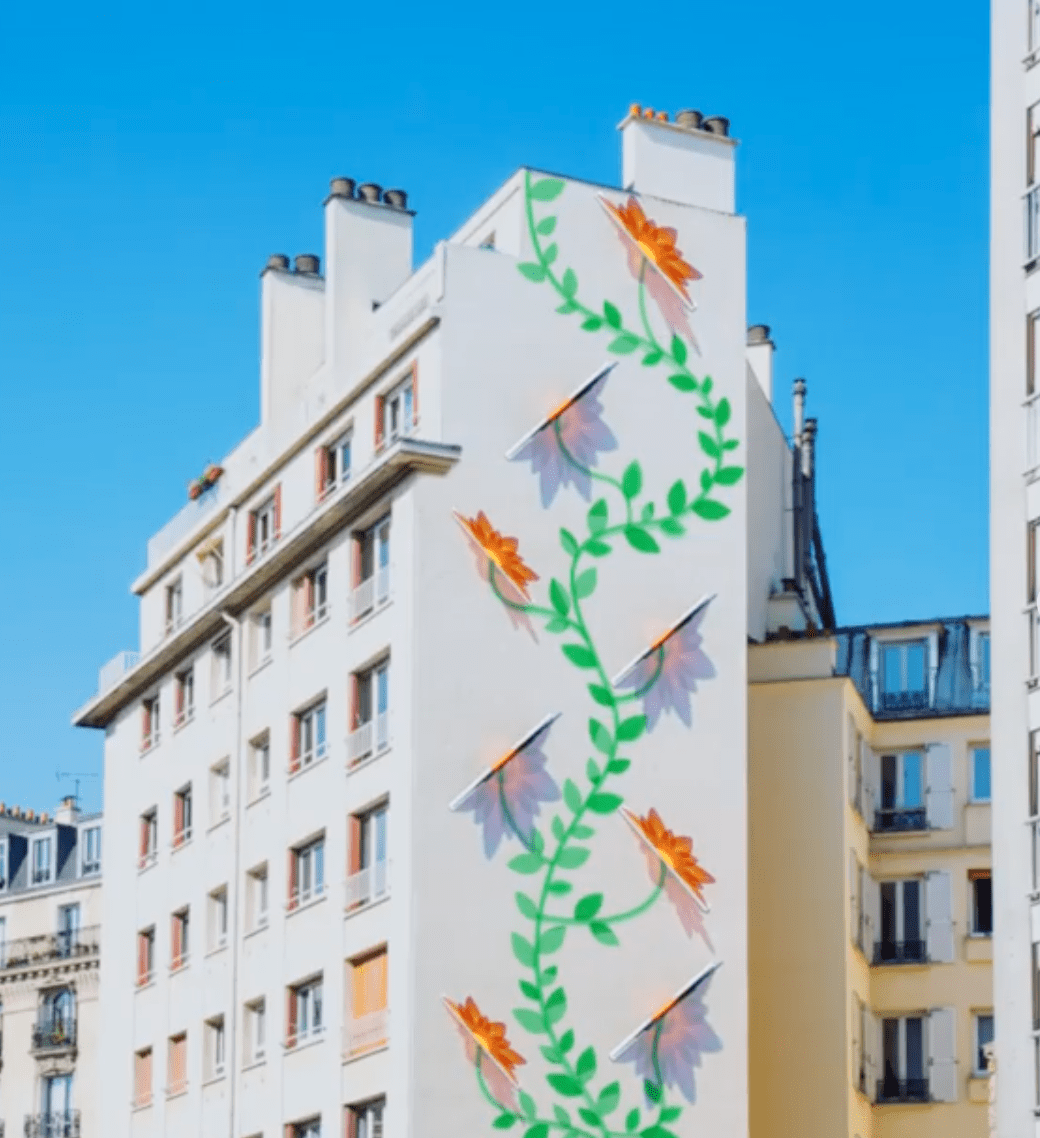 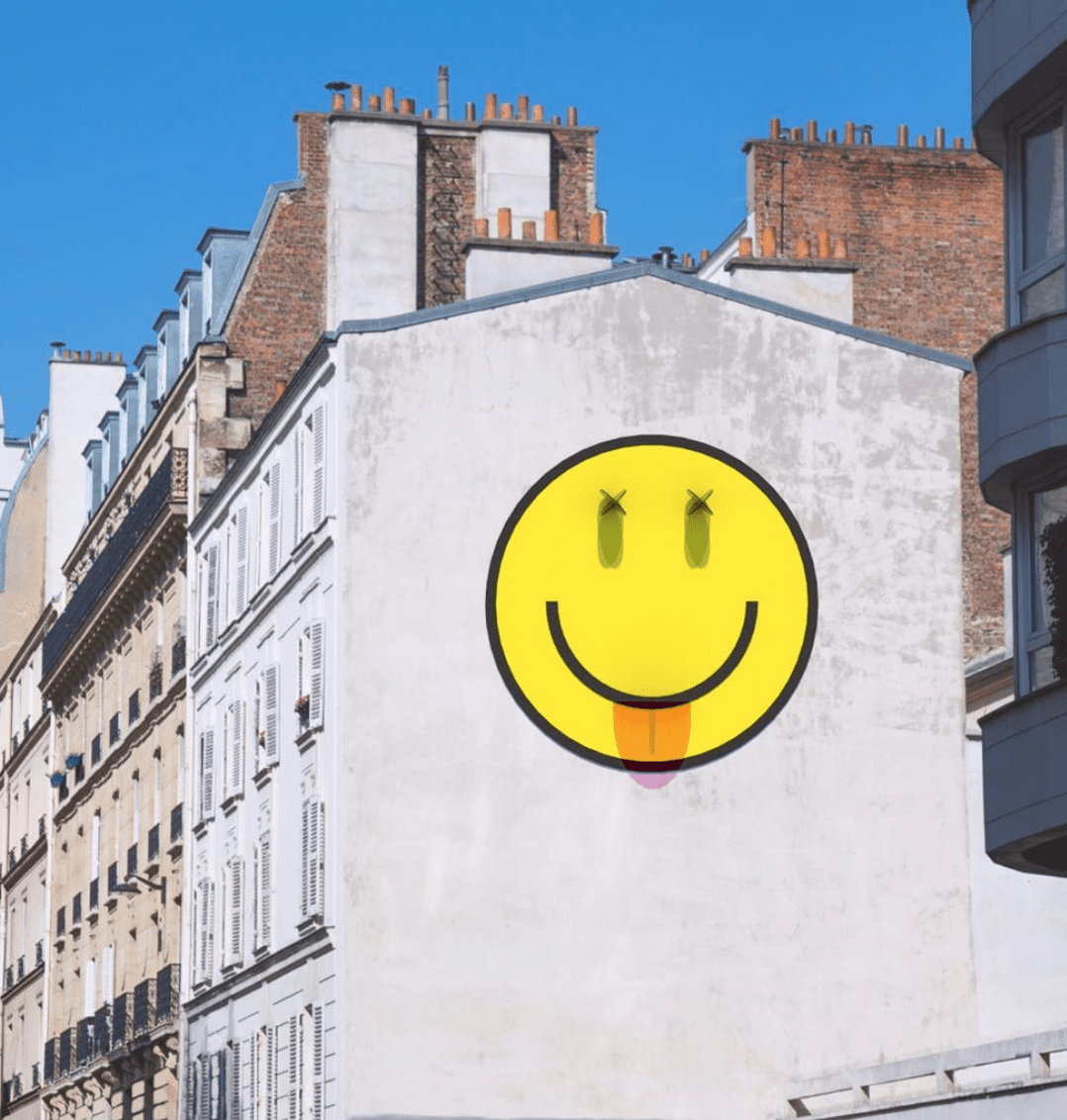 The 3D simulation of recycled Plexiglas mural installations of this young French artist and designer have spread like wildfire on social media in the past few months. Playing with the sunlight and the color of this translucid letters and shapes he has created three walls virtually located in Paris. «Out of refraction and mirror effect, the colored shadows of the blooming flowers caress the façade with a circular trajectory», he says from ‘Golden Flower’ virtual wall. «The flower opens and starts its cycle letting the sunlight go through it to start closing back when the rays of sun finish their journey. An immortal sun that everyday makes it bloom. It’s a virtual project that hopefully will see the light soon», says Pierre. At only 28, Pierre Brault has created the poster and visual line of the Paris music festival Rock in Seine, has managed the artistic direction for one of the new Canal+ TV shows, has collaborated with brands such as Zadig and Voltaire or La Prairie, and is behind the DJ Snake artistic elements. «The confinement has appeared as a pause in our rampant lives. Now is the opportunity to slow down, breathe and to connect with ourselves, our desires and dreams. Tomorrow will be the occasion to achive them all!» he says on his social media.