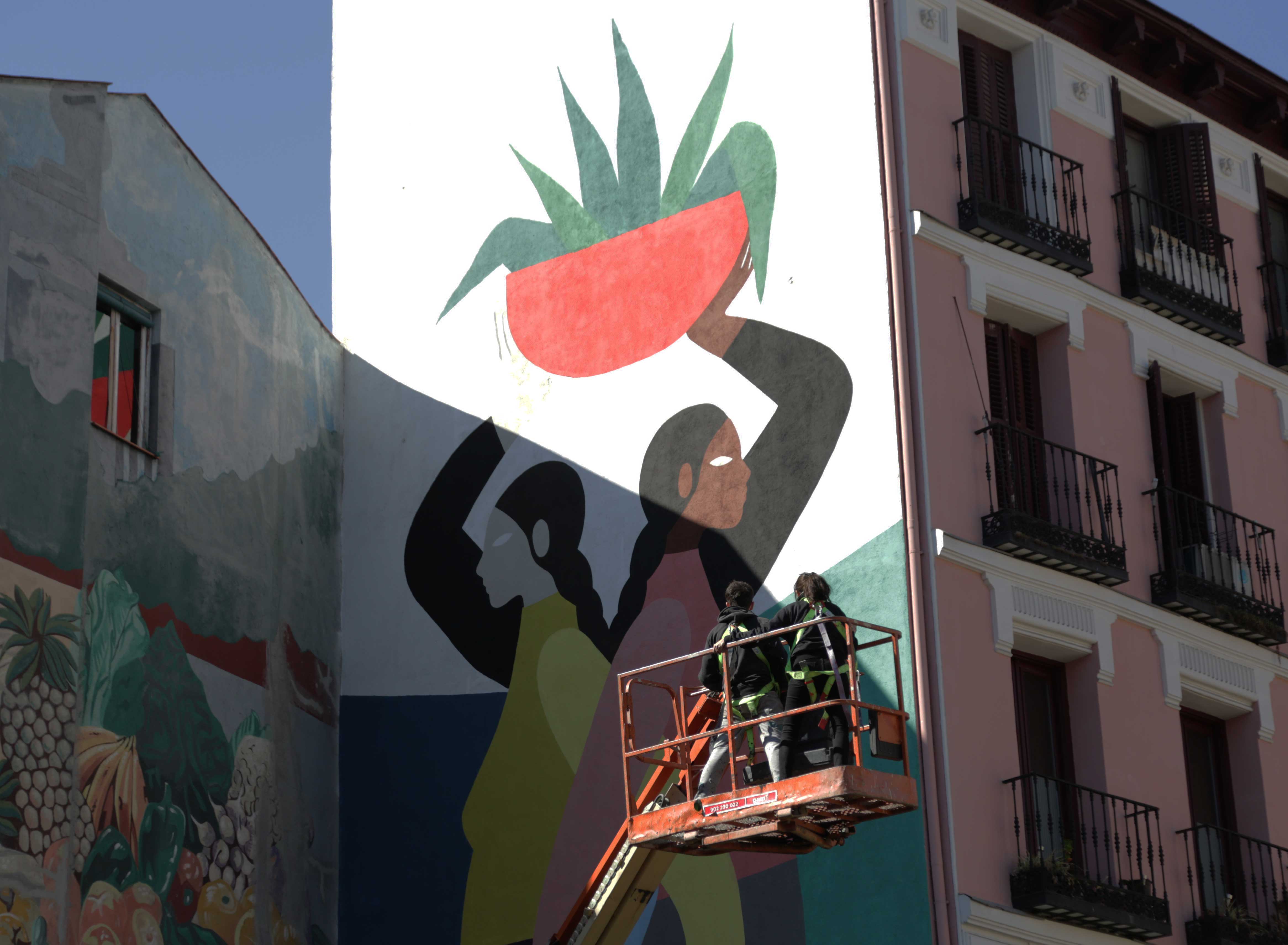 We have already toured through the neighborhoods of Chueca and Chamberí on our first Street Art route in the capital and we did the same during the second route through the Embajadores and Lavapiés areas. We have seen murals by such renowned artists as Ben Eine, Zest, Cranio, Nevercrew or D * Face but we still have a few more to add to the list.

On this third route through the neighborhoods of La Latina and Los Austrias, which will take us through the alleys of the oldest Madrid, we will discover the work of the American Jason Woodside, the Madrid-born Gviiie, the Austro-Frenchmen Jana & JS and the Mexican artist Poni. The cobbled streets, which will make us deepen into the most medieval Madrid going also through some local markets and the famous Rastro street market, collect on these walls what today is the footprint of the New Contemporary mural art. Let’s get started! 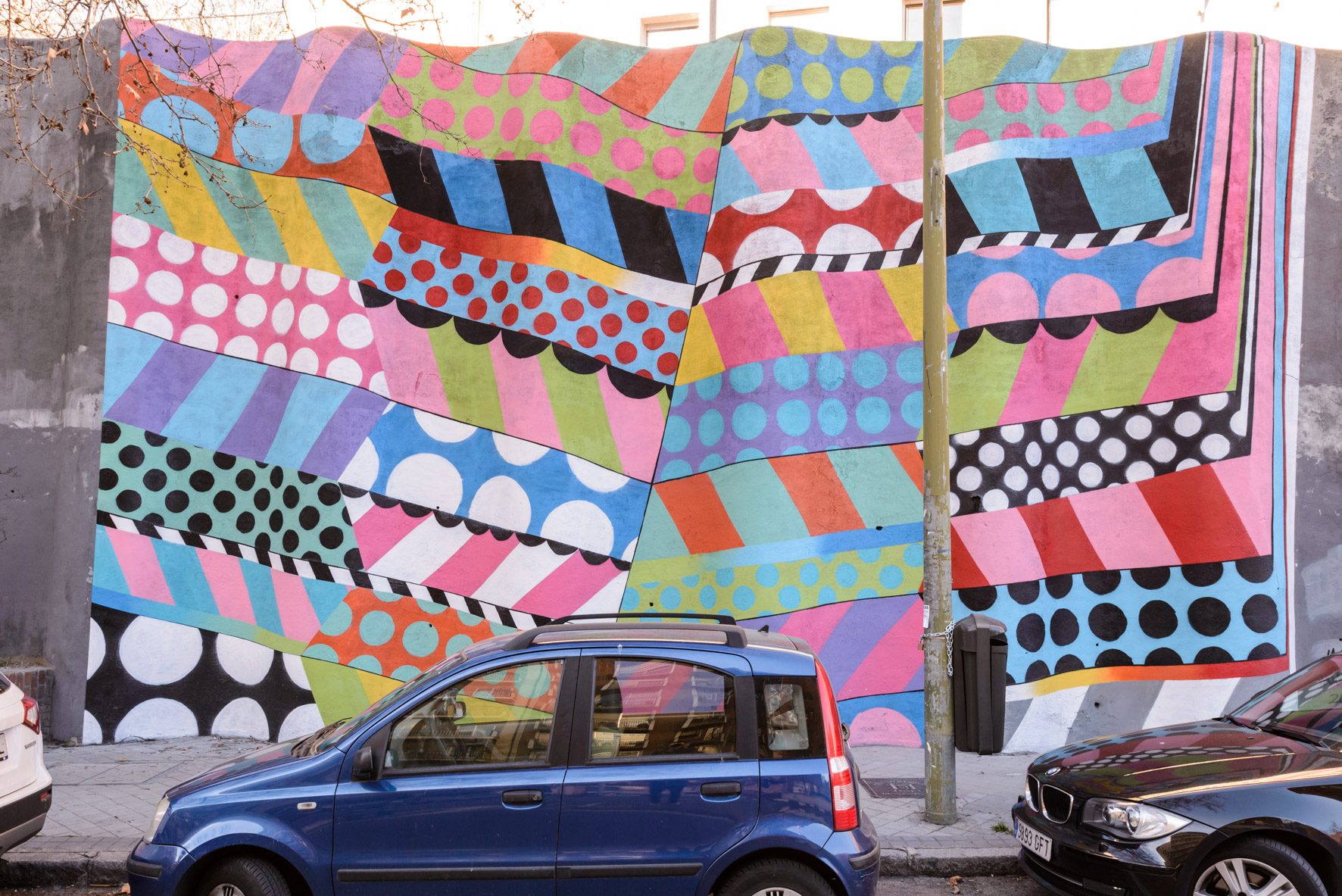 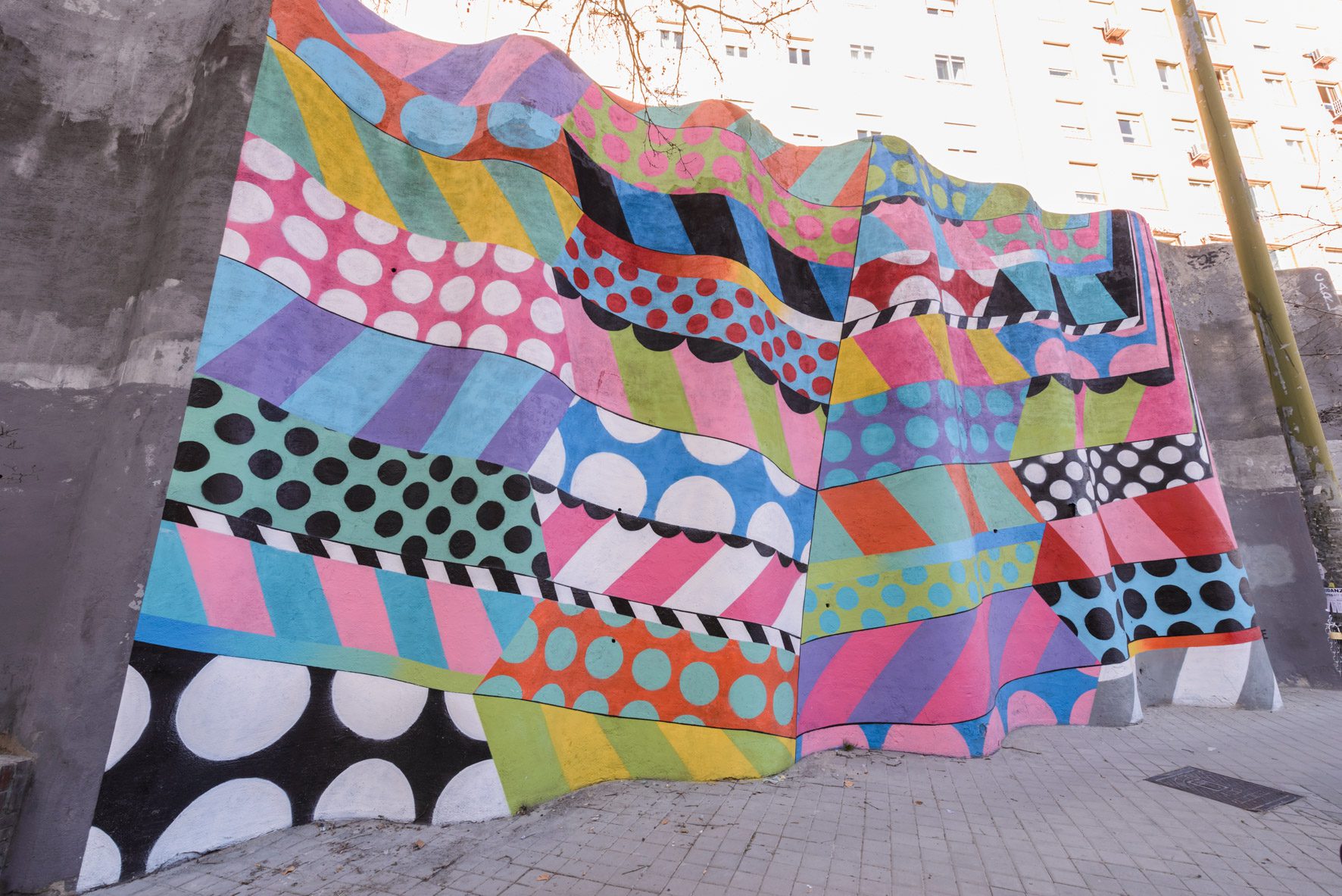 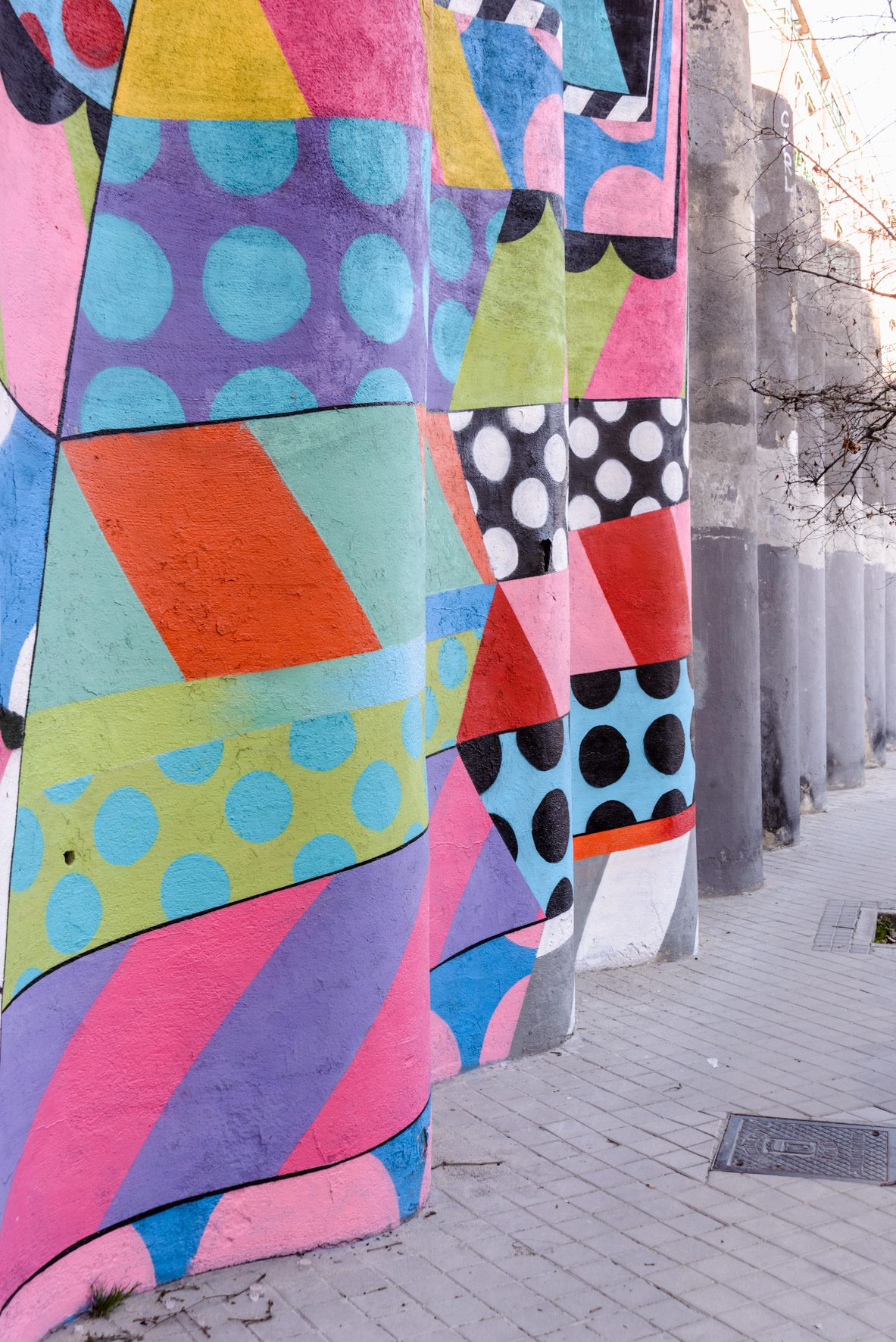 We start out this third Street Art tour, that will go through the neighborhood of La Latina and the ancient Austrias streets, with a first stop next to the Puerta de Toledo roundabout. The Miami-born artist Jason Woodside, one of the representatives of the post-graffiti movement, painted his first wall in Madrid here. Known for his refreshing and colorful walls full of geometric figures, he has painted all around the world and that today can be seen his work in cities such as New York, Los Angeles, Sydney or Paris and Madrid’s wavy wall is another example of it. These vibrant combinations and his optimistic work, often inspired by textiles has made him developed and exclusive clothing collection. We have a short walk up Ribera de Curtidores, the emblematic street where the Rastro street market is held every Sunday, until we reach our second stop next to La Latina metro station. In the same Latina Square (Plaza de la Cebada) we make a quick stop at the Mercado de la Cebada [Barley Market], to contemplate the domes of the building ,colorful painted by the internationally known Spanish artistic collective Boa Mistura. Inside this market, every weekend families and friends gather around their fishmongers and butcher shops, where they prepare you the fresh product of the day ready to eat in its makeshift bars. 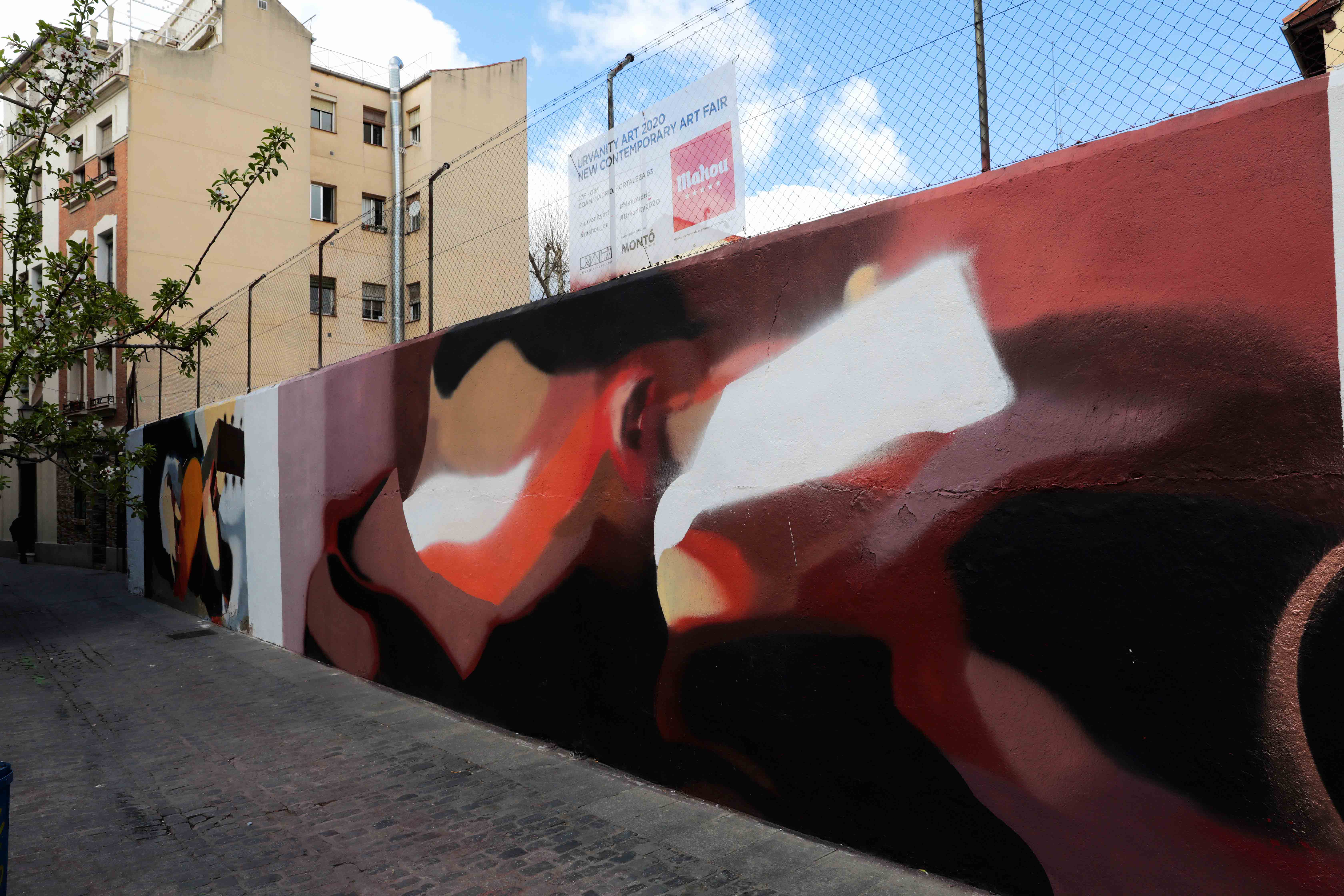 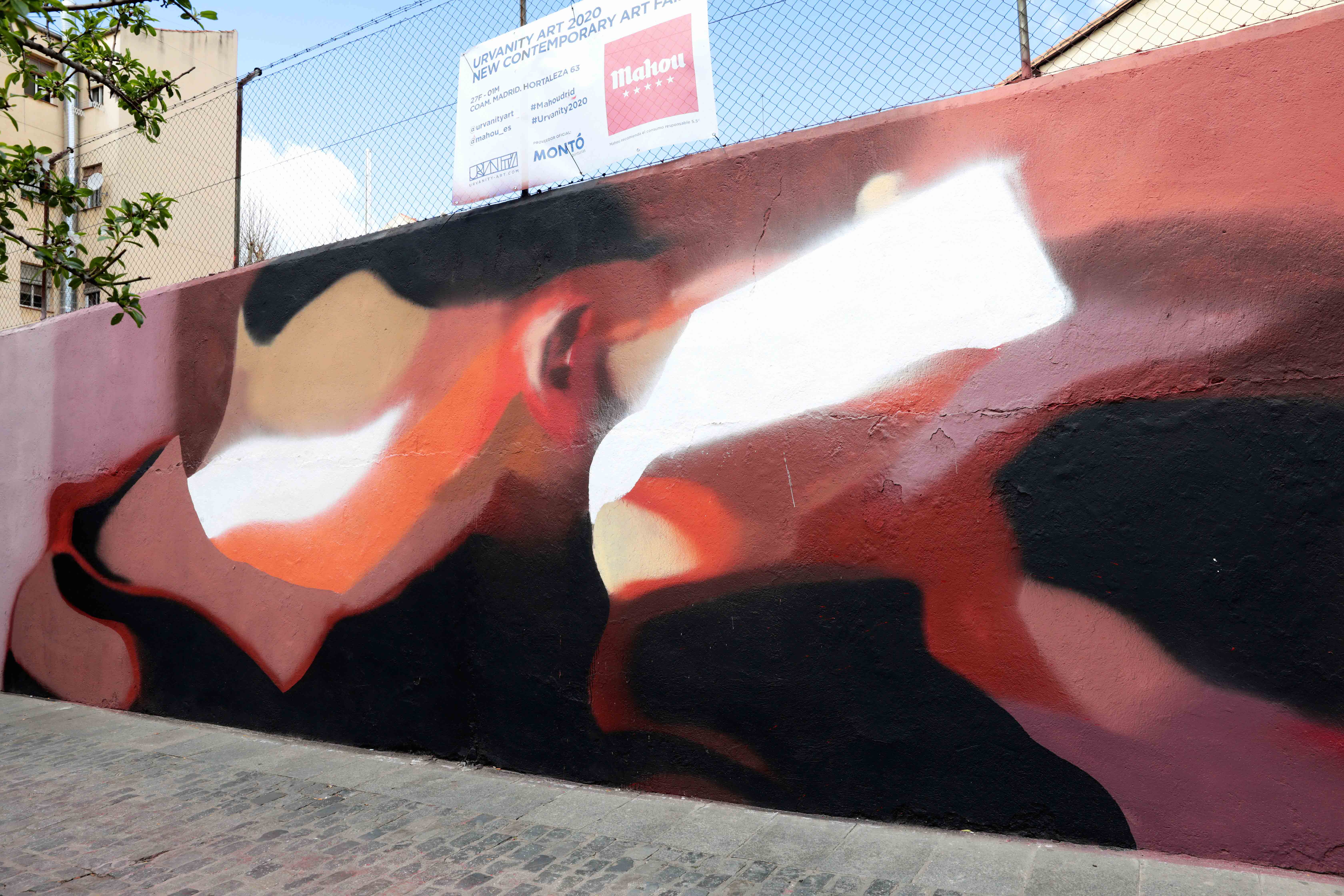 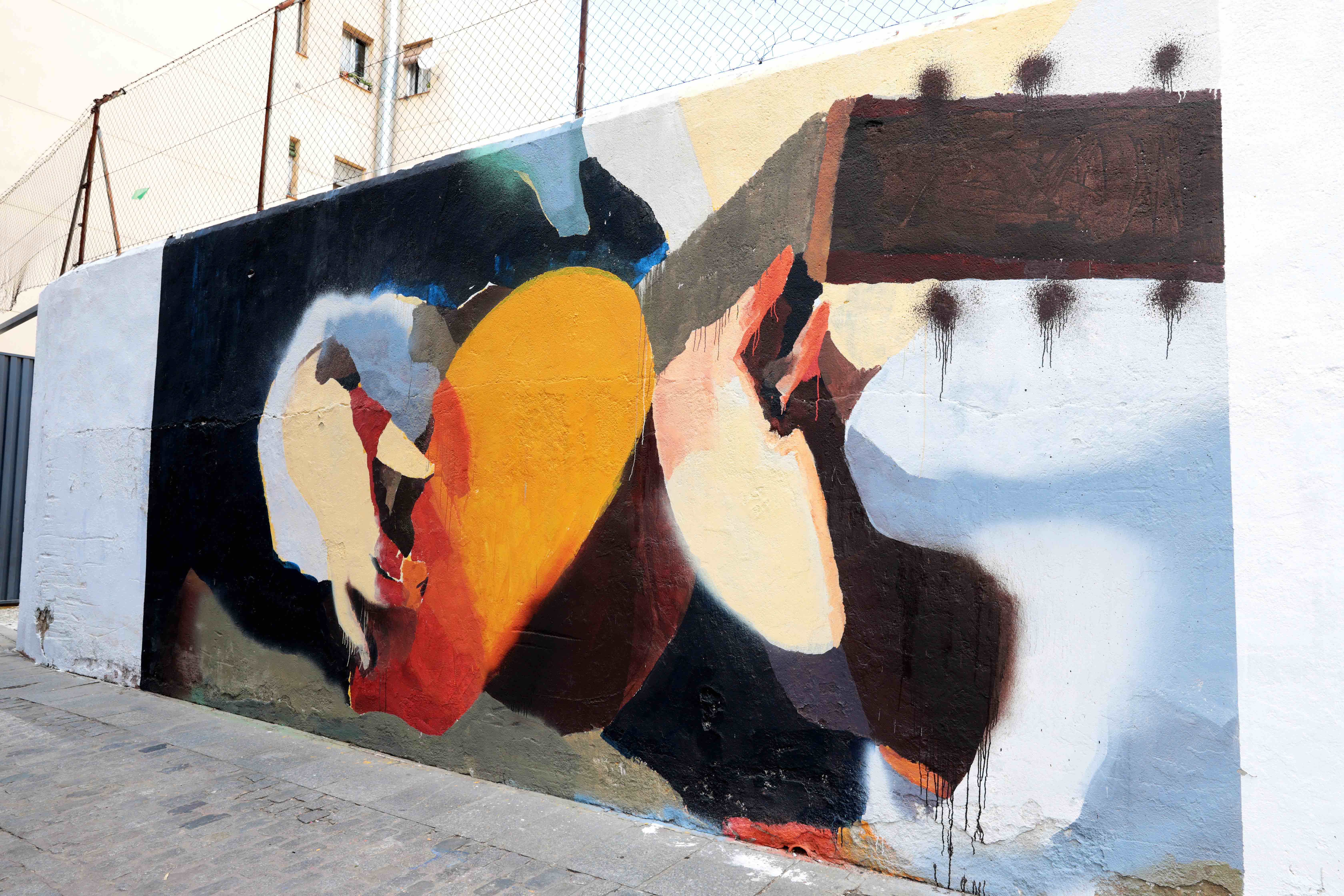 It’s after this stop that we enter the ancient paved streets of the Austrias neighborhood. On Almendro street we will find Gviiie’s [or Guille’s, how it’s pronounced] (Madrid, 1989) horizontal wall, the second on this route on the border of the Castilian Archbishopric of Spain. «For some time now I have been reflecting on the magic of the fact that art transcends space-time limitations, projecting itself emotionally and intellectually into the future as few other human disciplines manage to do», says the artist Gviiie. «In this case, I wanted to reflect in a double way on this journey through time: on the one hand, in a more evident way through the relationship between classical music and contemporary forms of musical consumption, which allows a sixteen-year-old teenager to vibrate with his mobile phone while waiting for the subway train the same way Bach vibrated when composing his ‘Prelude in C Major’. And on the other hand, and in a more subtly way, with a tribute to Caravaggio’s ‘Suonatore di liuto’, whose works will continue to vibrate even when the author and the one who now contemplates it not alive anymore», explains Gviiie about the horizontal wall he painted last February during Madrid’s Art Week for Urvanity Art 2020. 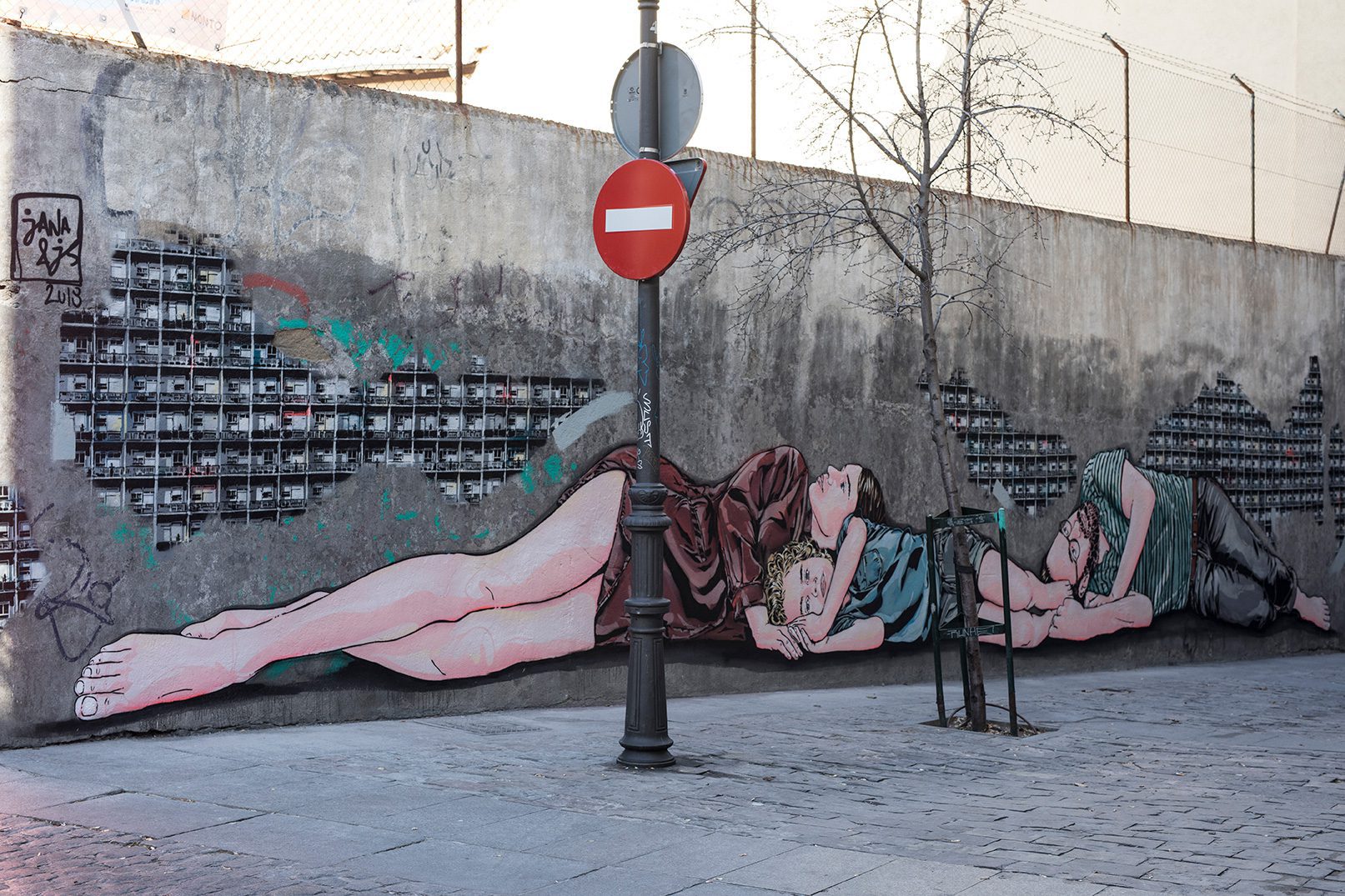 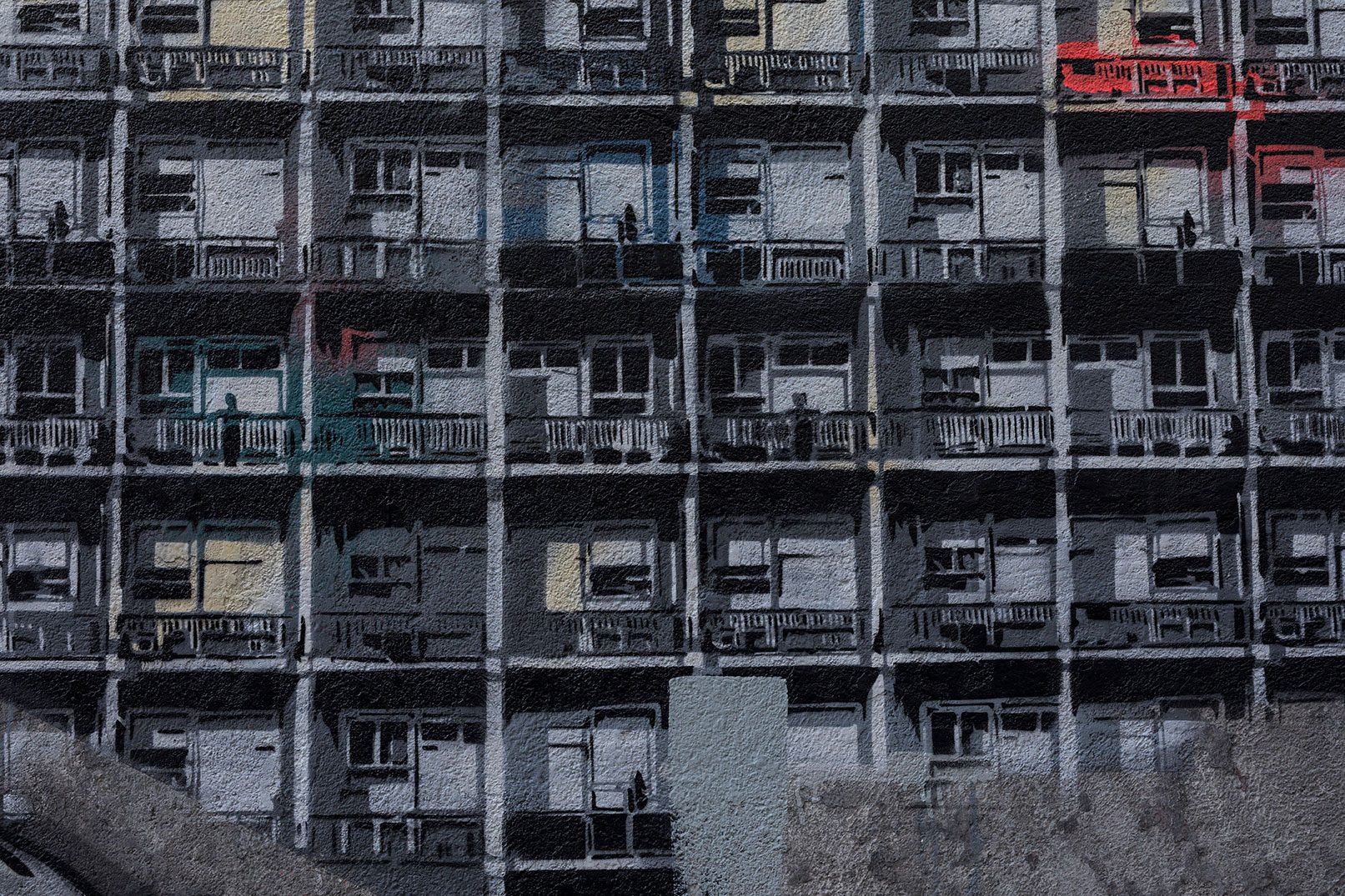 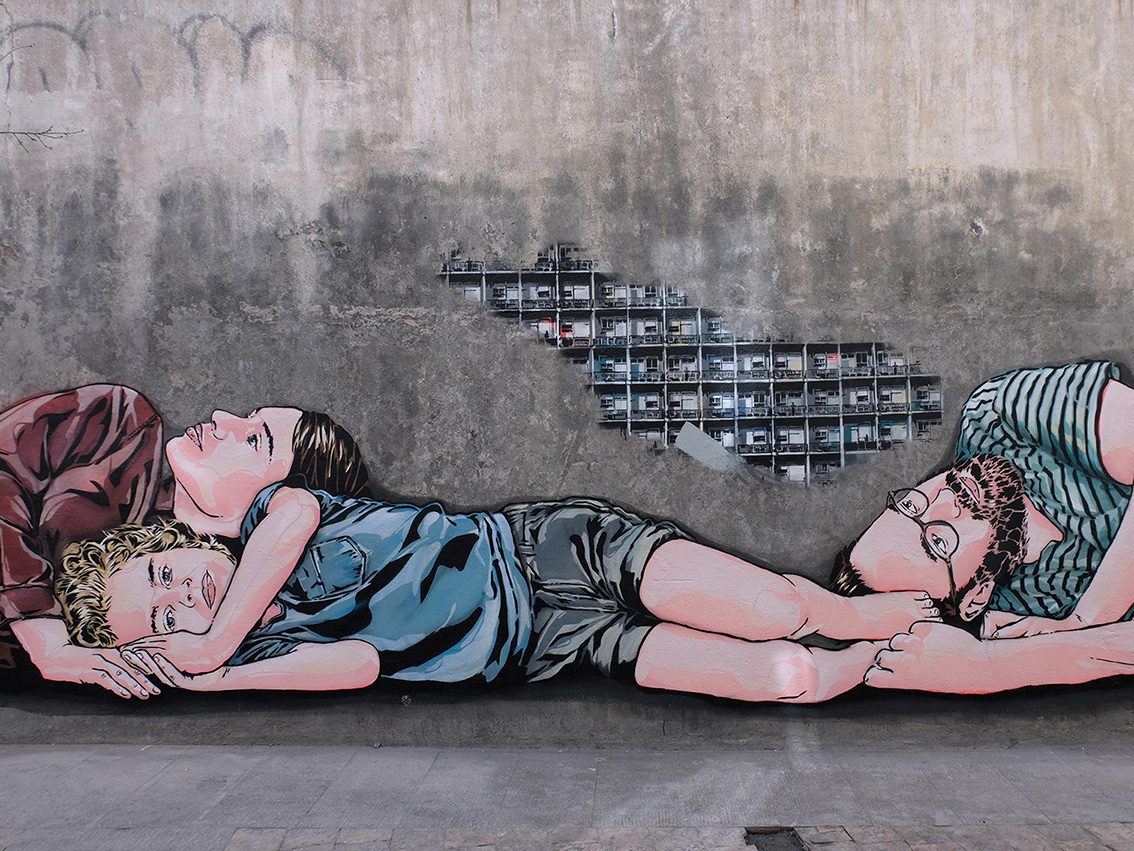 Right around the corner of Gviiie’s wall is that of Jana & Js, a couple of Austro-French artists whose work is inspired by the city and its own architecture over time. In their paintings they work with situations of people in the city habitat using a stencil technique and working with the photographs they shoot themselves. The artists play with the worn and rare background of the wall itself where they paint their piece introducing in this case the facades of buildings, that they usually incorporate as honeycombs, and a couple lying and intertwined with each other, that leads us to a search for solitude and an honest reflection on emotions. 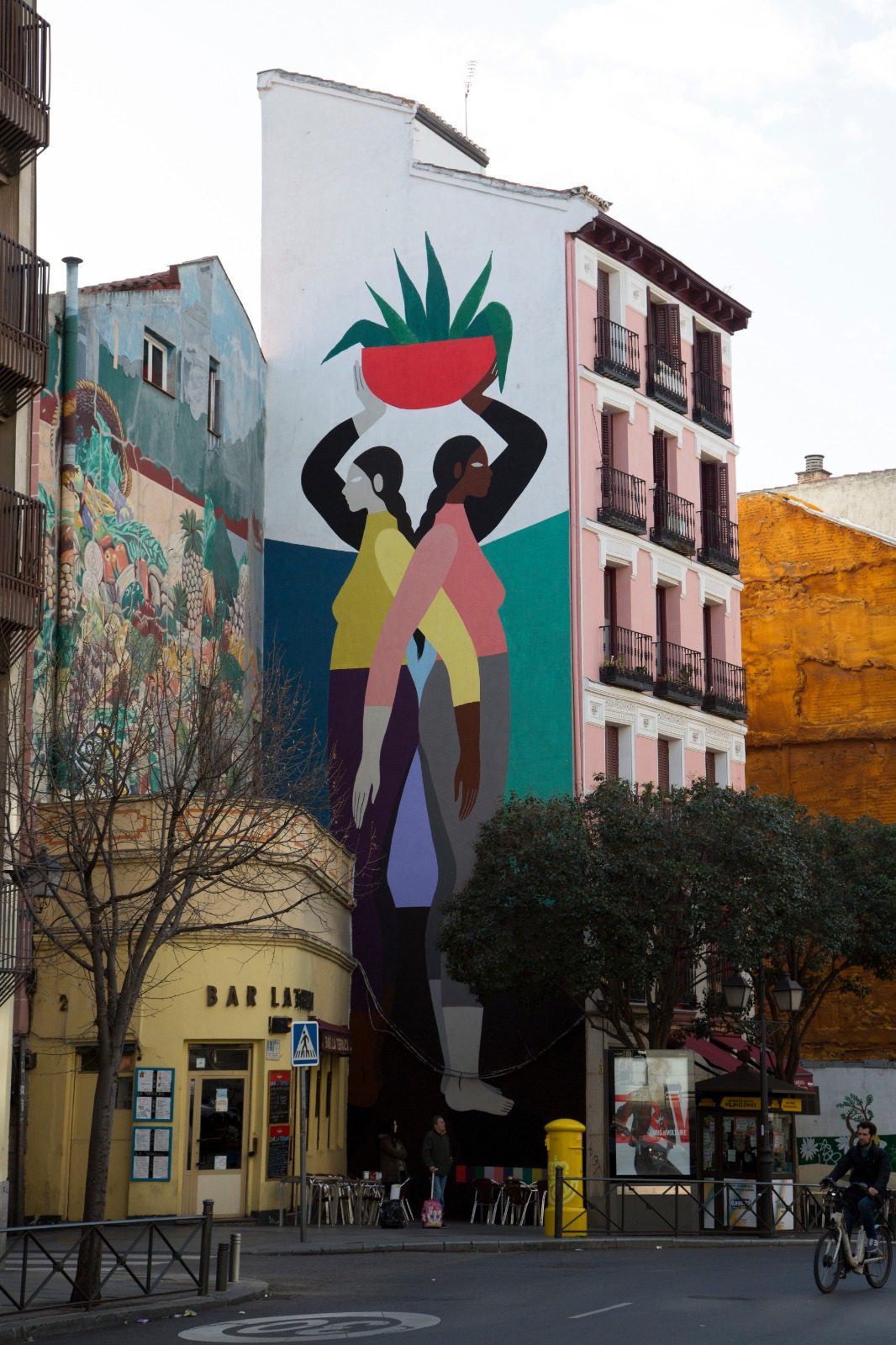 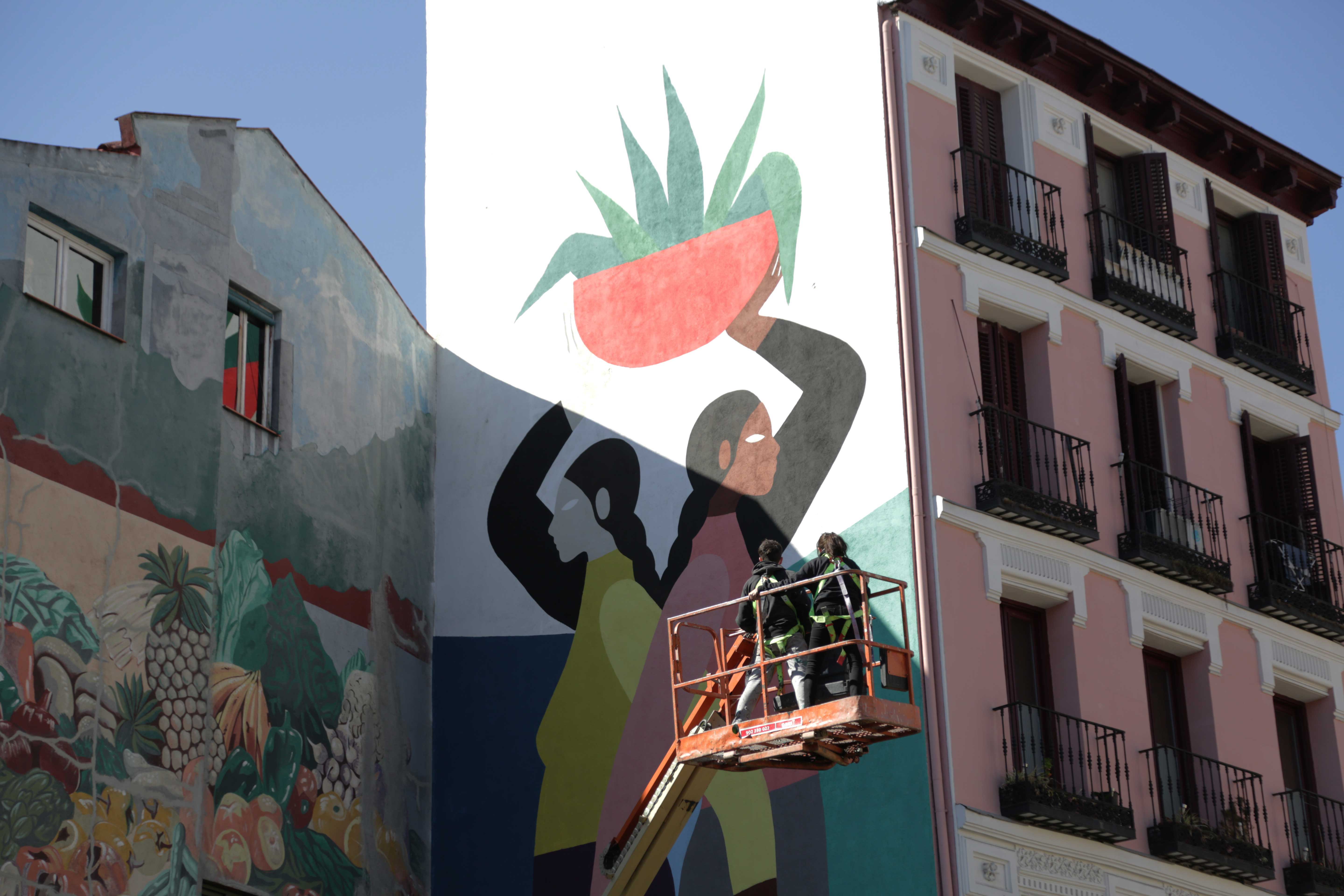 Crossing the emblematic street of Cava Baja we arrive to the centric the Puerta Cerrada square, right by the emblematic Plaza Mayor, where the artist Hilda Palafox aka Poni’s (Mexico City, 1982) wall is located. This almost 20-meter high wall, inspired by sorority not only between women from the same country but from any part of the world, represents a symbol of brotherhood and union between cultures through the representation of two women of different races intertwined through their arms. The Mexican artist decided to work with the palette of colors that were found in the surrounds of the wall itself, making it an integrative proposal that would live in harmony with the architecture and urban landscape of its environment.