Green artists fighting for a change 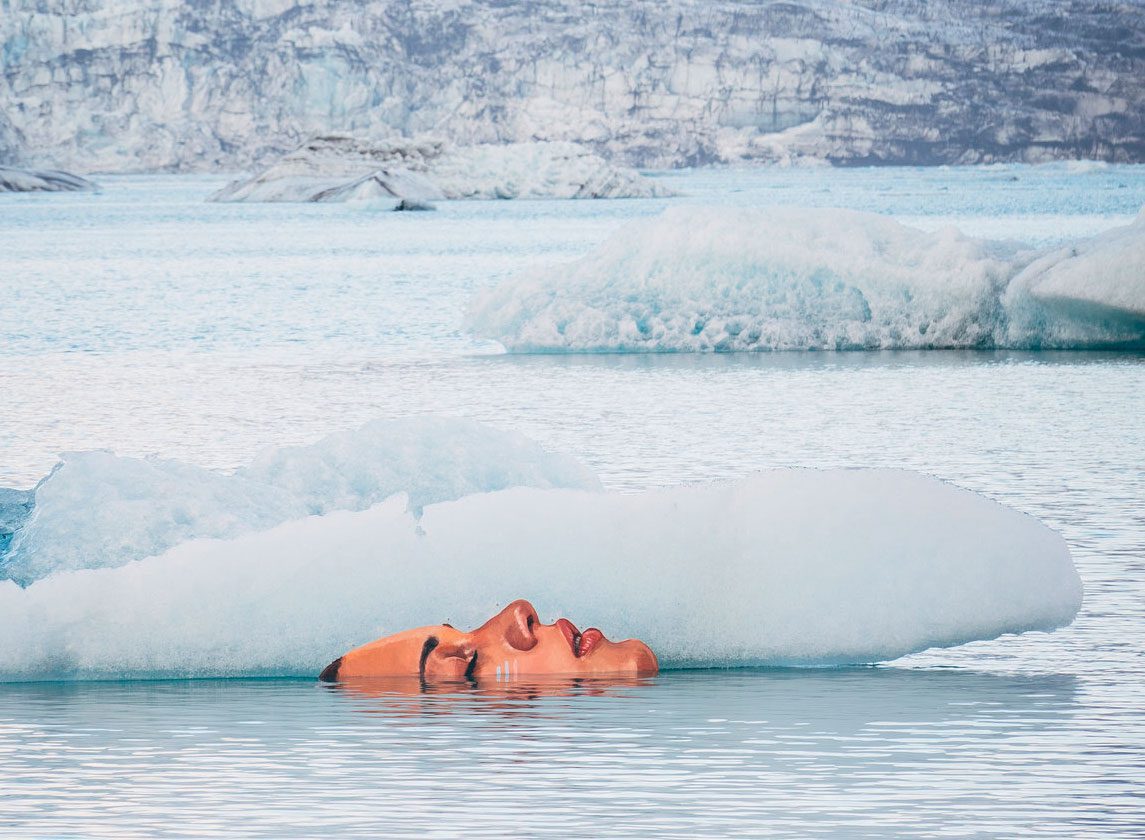 Last Friday June 5th we celebrated World Environment Day. This has been the date chosen by the United Nations to -year after year-  promote awareness and action for the protection and caring of our planet through pushing politicians and organizations to focus their fight on this common goal that also takes part through individual actions and the reflection of our own lifestyle and consumption.

Many artists have dedicated their work to this cause and through it they denounce the consumerist and waste-generating system in which we live and lead us to a forced reflection with which they intend to provoke a direct response from the viewer. We compile some of the artists who are leading this fight and we put together some of their most representative works. 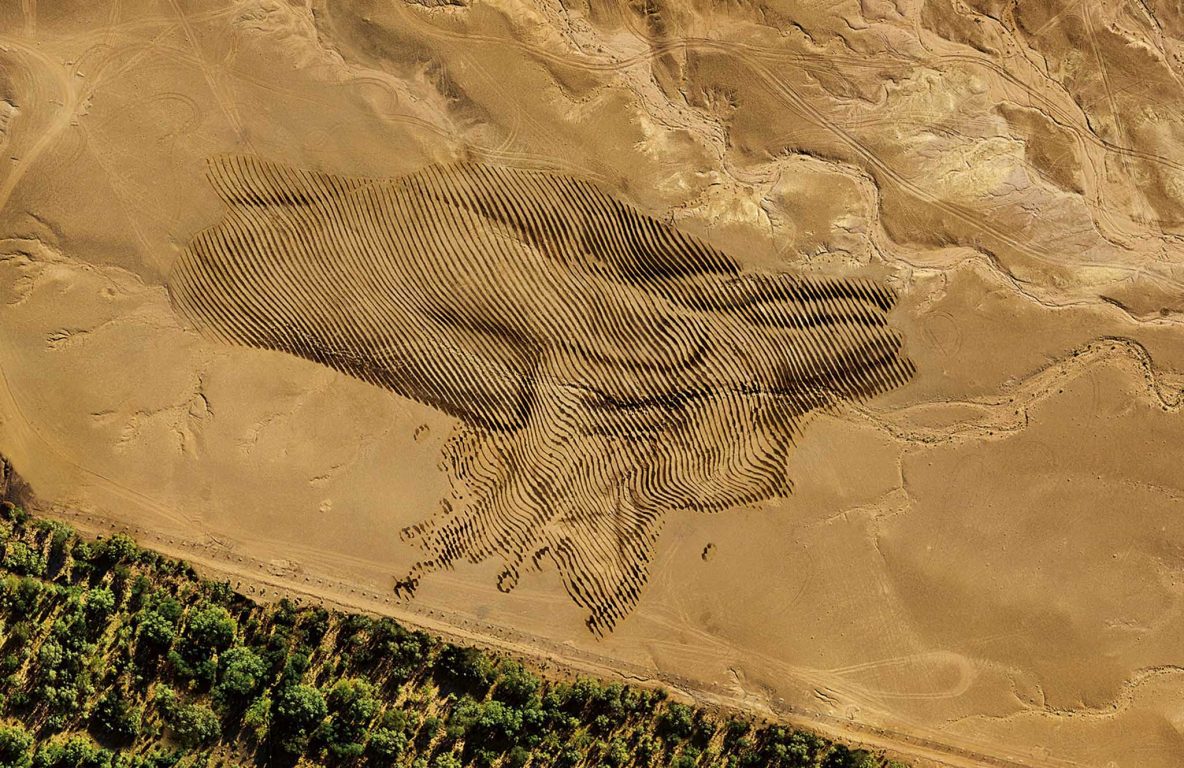 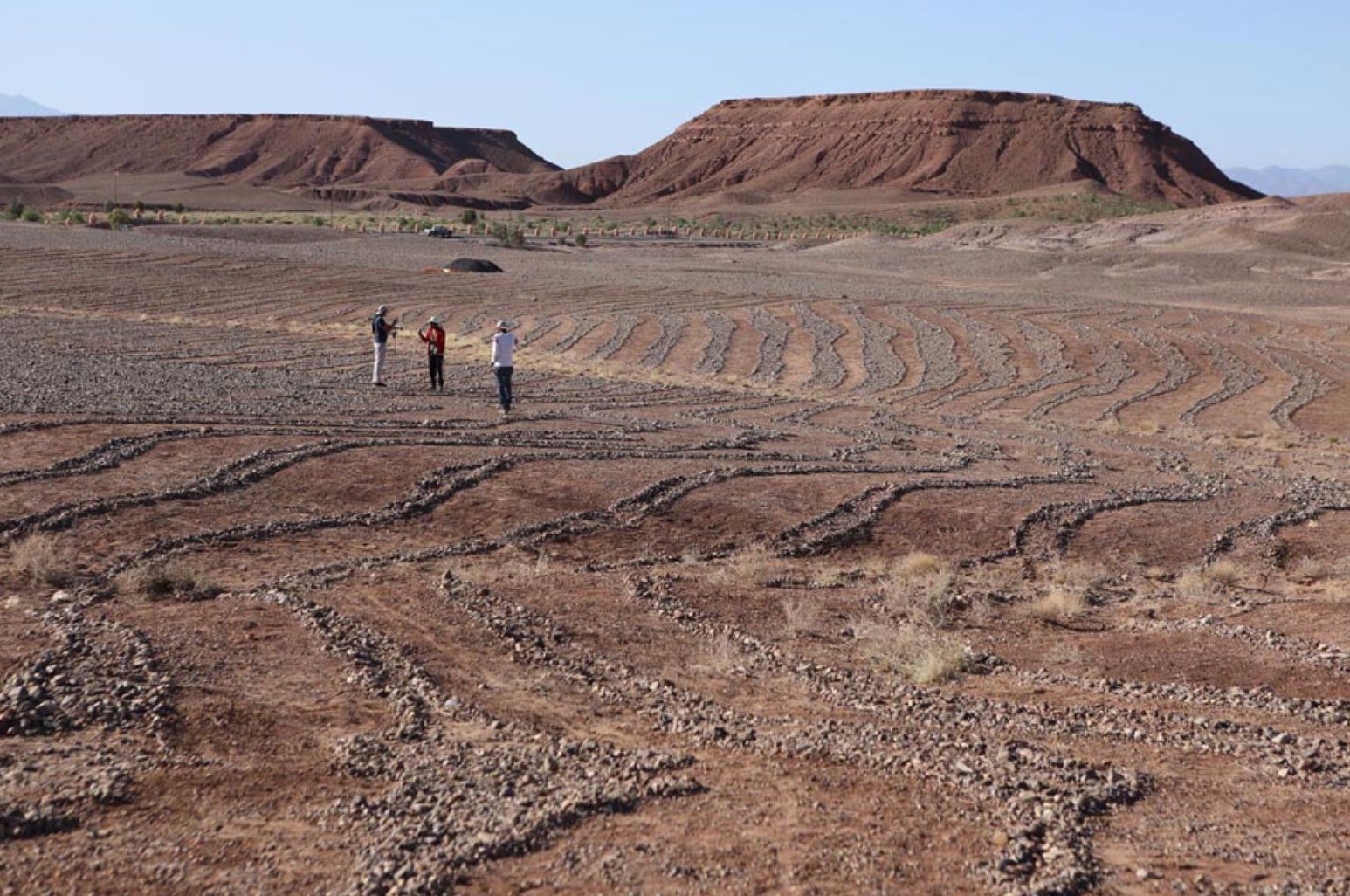 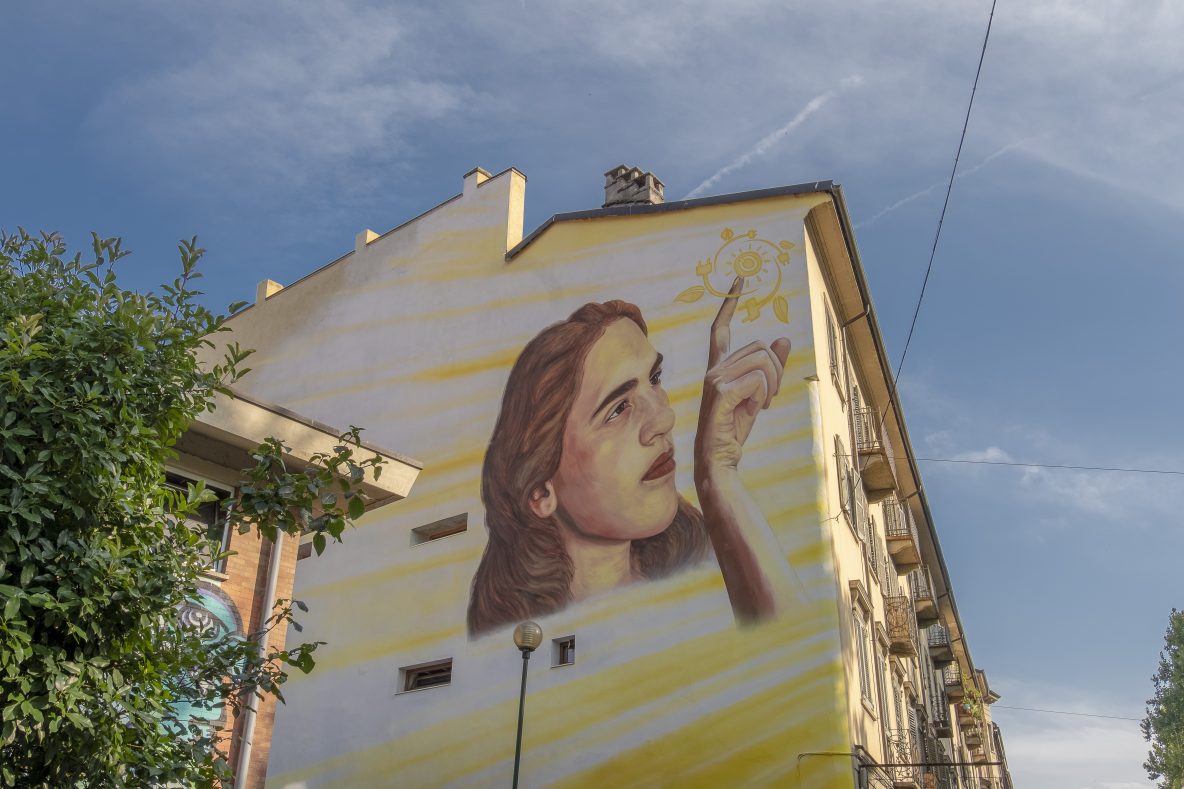 Artist and activist, Cuban-American Jorge Rodríguez-Gerada (Santa Clara, Cuba, 1966) residing in Barcelona, focuses his work on contemporary social issues, reaching out to local communities through his work and seeking to provoke factors of change. Throughout his extensive career as an artist, he carried out works in defense of the environment such as his ‘Promise’ mural in Turin in a project together with the United Nations on the sustainable Global Goals towards 2030. «I created ‘Promise’ representing global objective number 7 mural to bring awareness to the need of ensuring access to affordable, reliable and sustainable energy for all. The piece alludes to the importance of acting now to assure a positive outcome. We must think towards our world ́s future and the environmental conditions that our children will inherit. A billion people still do not have access to electricity». ” ‘Perpetual Flow’ is another of Gerada’s projects, in which on a 37,500 m2 area in the Moroccan desert close to Ouazarzate and through ‘land art’ work, where Running water flows between the fingers of two huge hands (made our of 36 tons of dark gravel) in a “perpetual flow”, symbolizing the ability to reuse water to create a greenbelt around the city and so protect it from sandstorms. It is worth investigating the work of this world-renowned artist who raises his voice, not only for environmental but also for social causes. 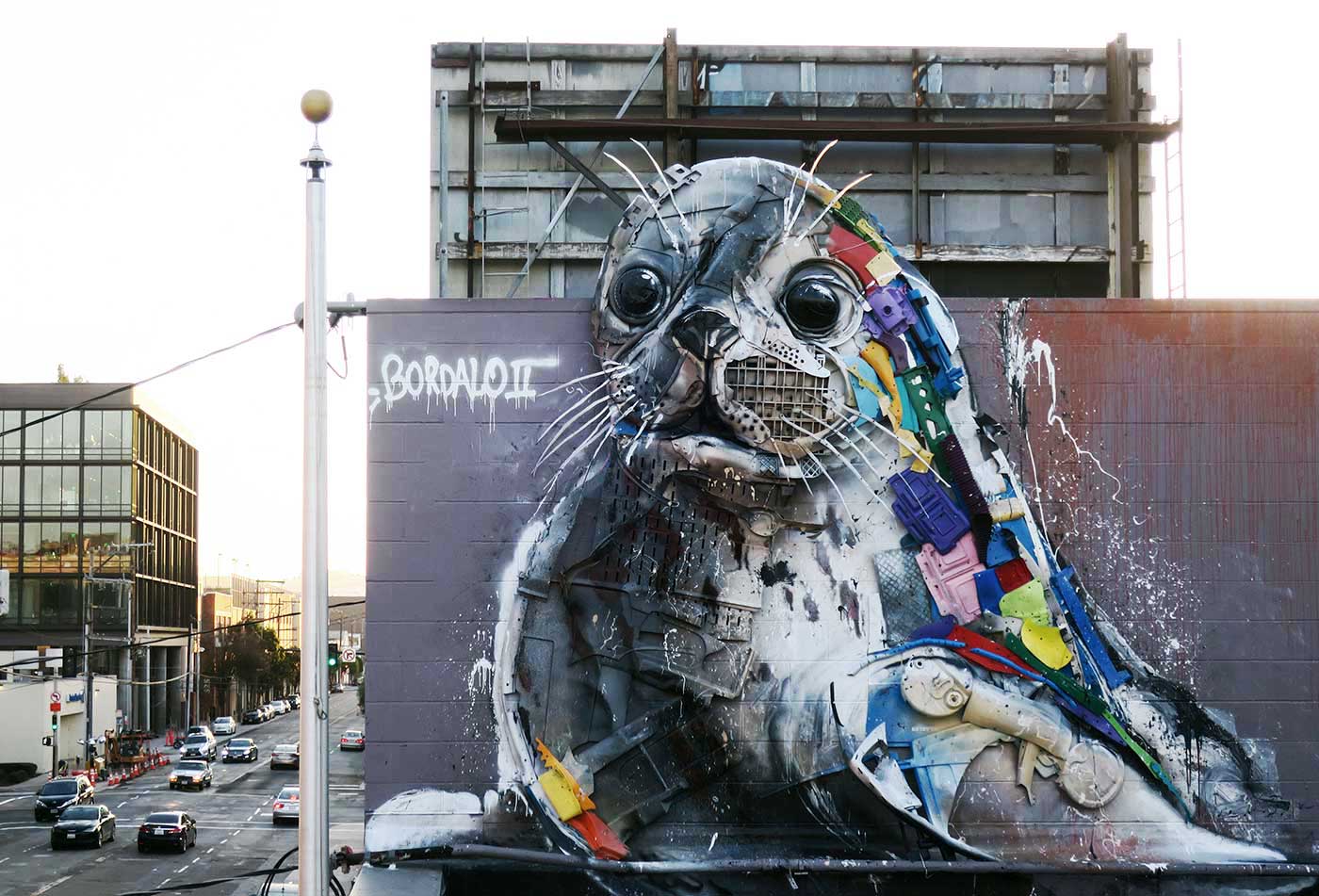 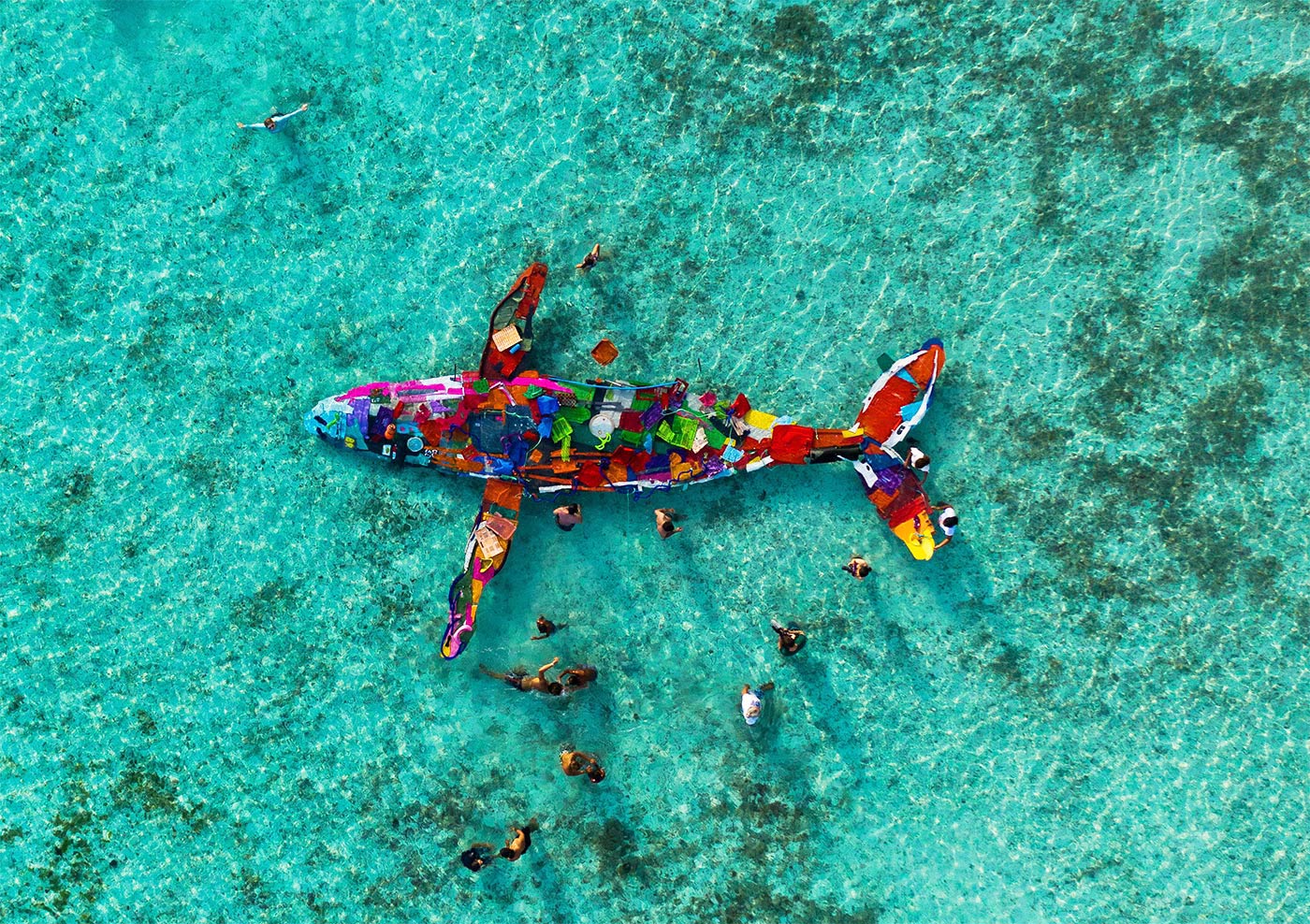 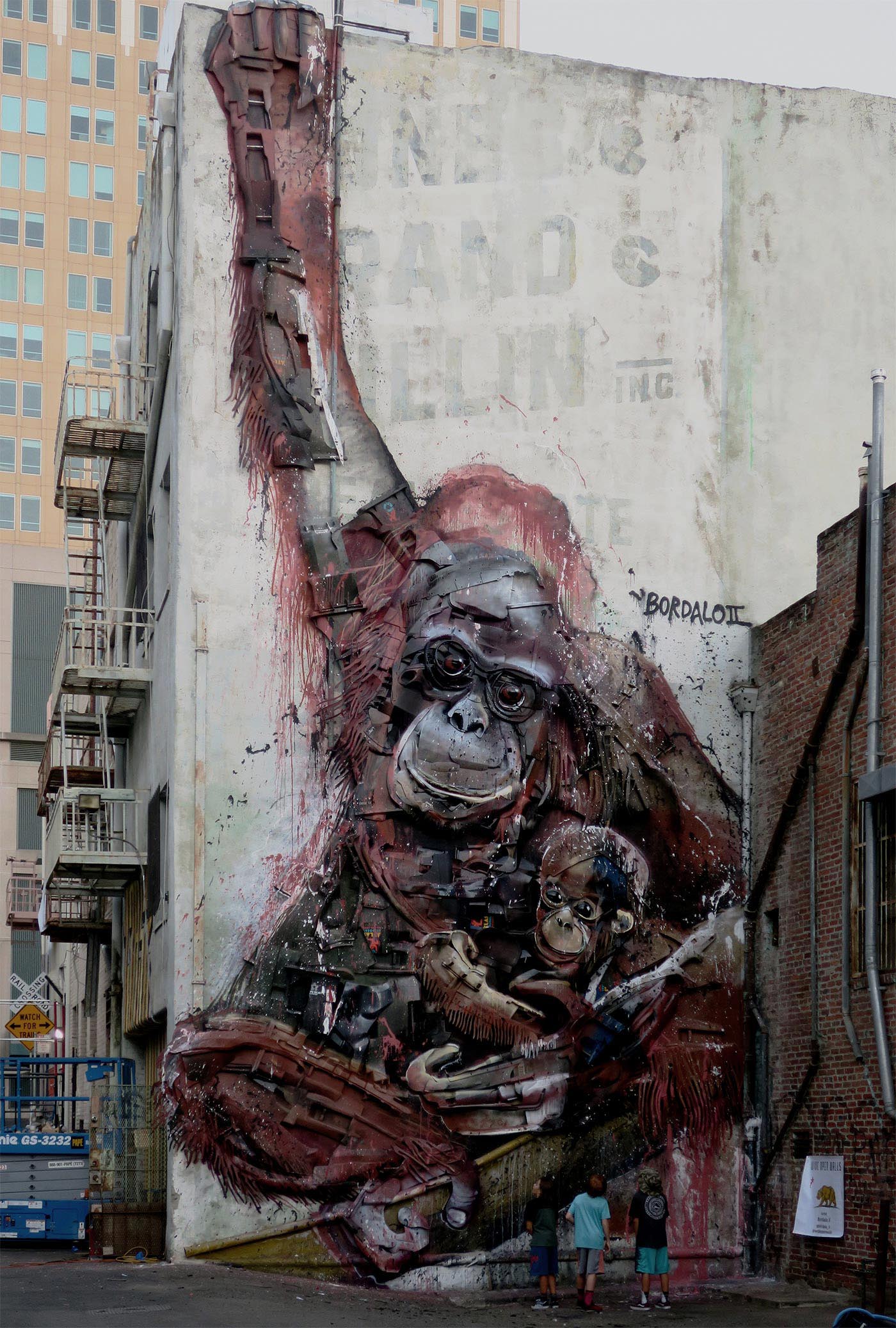 Artur Bordalo (Lisbon, 1987), best known as Bordalo II, in honor of his also artist grandfather, performs an exercise on public space through the trash and waste found in it. A direct and accurate criticism to consumerism and to the constant increase of garbage that destroys our planet are the main lines of his work that he develops from his hometown in Portugal. He puts this greedy and materialistic society of which he, like everyone of us, is also a part on the ropes. A waste counter located on his own website calculates de quantity of trash and reused material he has worked so far: 62 tons since 2012. Toucans, panda bears, lemurs, chimpanzees, cats… His large-scale animal ‘trash art’ made out of old cables, pipes, pieces of broken furniture or car parts found in the streets and in public landfills that surround the place where he performs his intervention have travelled around the world and are a direct slap in the face that brings us back to reflect on these disposable and throwaway society that we live in. 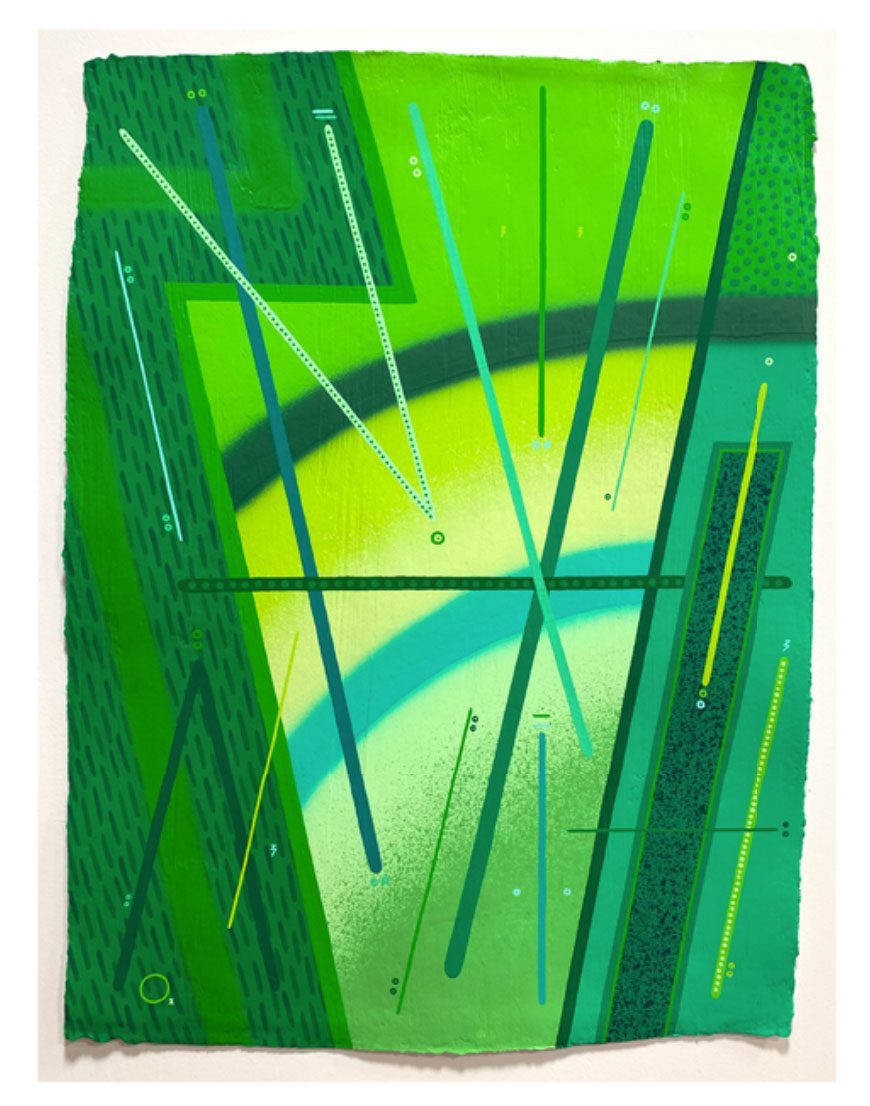 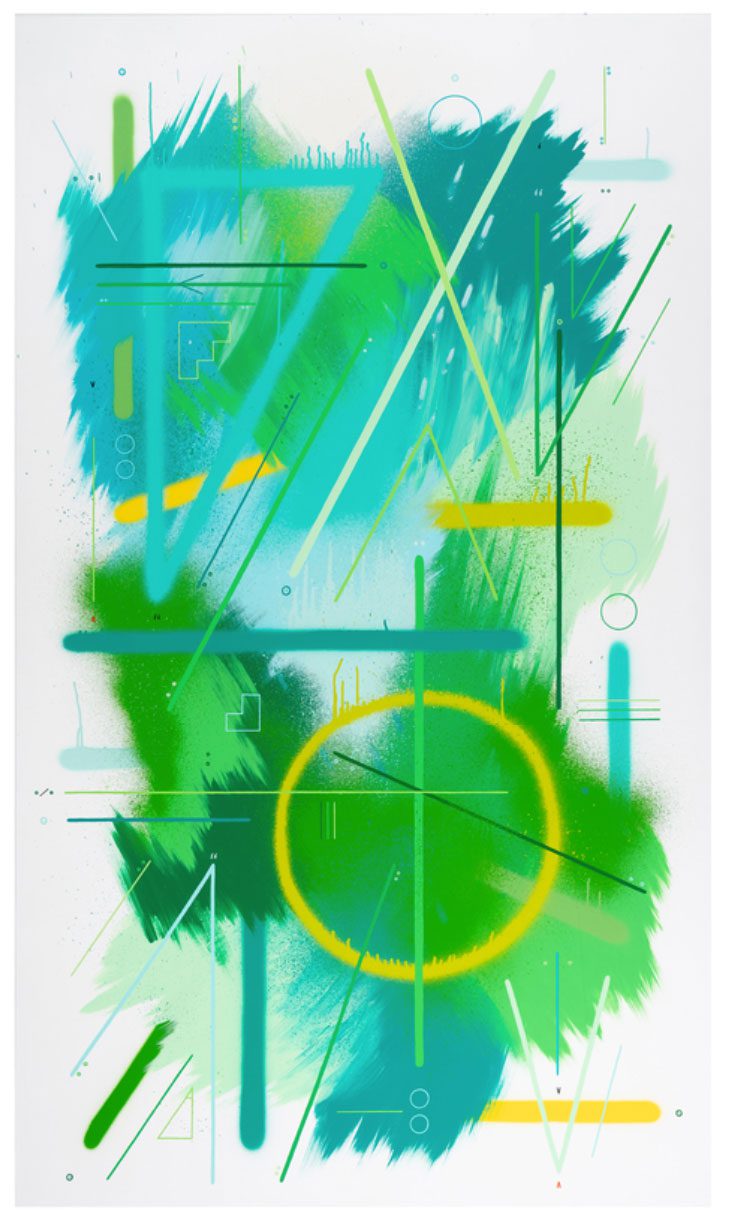 «Our duty as artists is to contribute with even a grain of sand and bring up a reflection throughout our work so that people can be increasingly impregnated with the idea that we have to do something daily and not just put it all on our governments». In his last exhibition for the CEART Museum in Fuenlabrada Sixe Paredes (1975, Barcelona) presented ‘Sacred Circle’, a monochromatic artwork far from the colors with which we are accustomed, using only blue and green colors representing the hydrosphere and the biosphere. «In my own language I speak about illegal mining that intoxicates the jungle with mercury, deforestation, the destruction of the planet and I made two videos for the exhibition to helped understand the paintings themselves», continues Sixe during the conference he participated in about ‘Climate dualism’ during the last edition of Urvanity Art 2020. «My work has always had a lot to do with nature, animals, mountains … I have been talking about respect for nature for a long time. I think that this issue could still be given more importance and I have the impression that not many people are talking enough about this», he concludes. 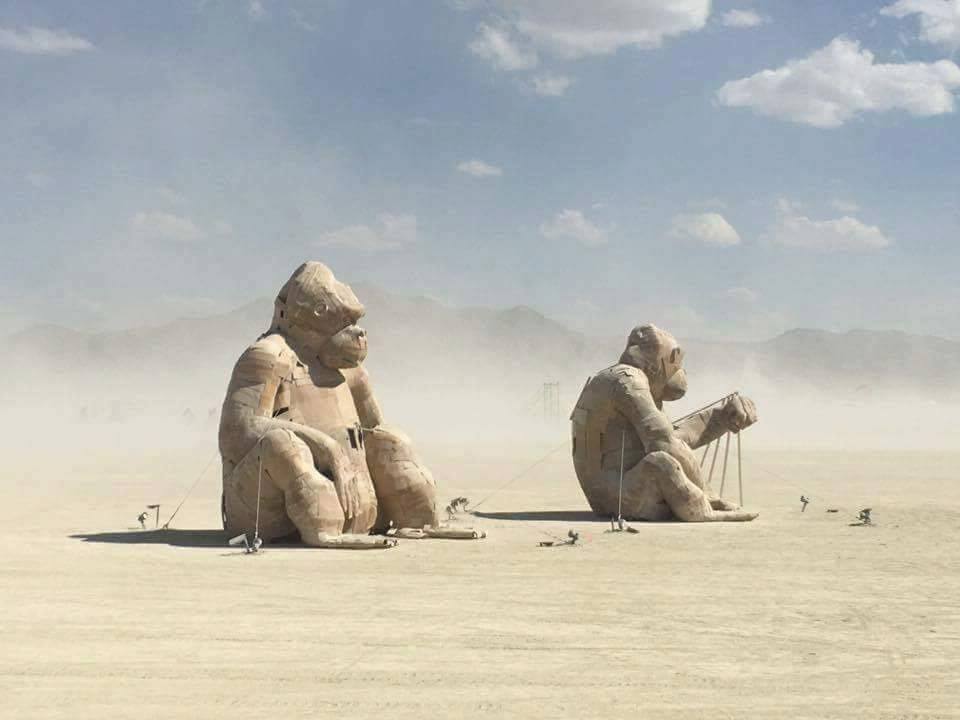 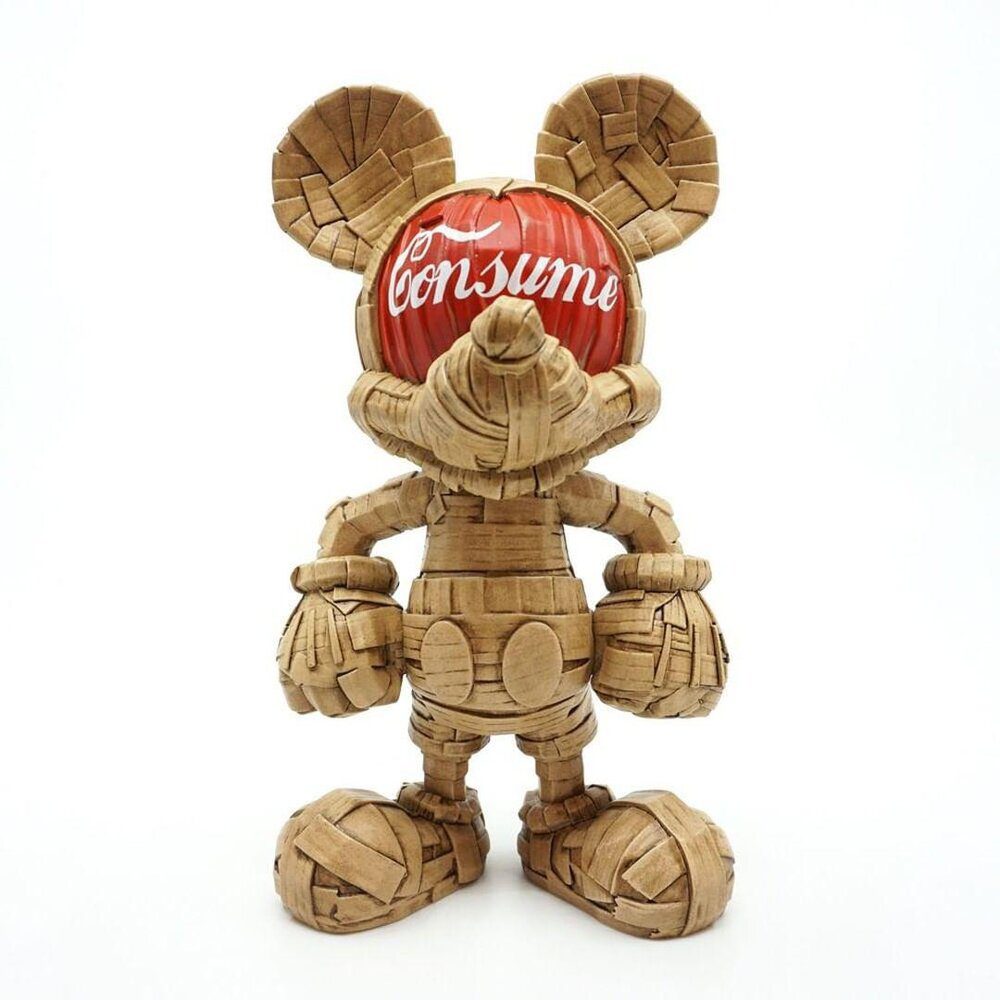 Very much in line with the work developed by Bordalo II, the young Canadian artist Laurence Vallières (Quebec City, 1986), creates her sculptures with the discarded cardboard that she collects in the streets of the cities she travels to shape and create sculptures generally of animals. A work in which she criticizes the consumerist society through the waste that we generate and that she recovers to give it a second life as cardboard hunting busts of bears, gorillas or Mickey Mouse as well as large-scale sculptures such as the last one she made of a 6-meter long triceratops during Urvanity Art 2020 and which she exhibited in the COAM gardens in Madrid. In addition to animals, she developed a line of weapons in the past, such as cardboard assault rifles with multinational brands printed on the surface, and she has been lately working on cartoon toys such as Tweety bird, Daffy Duck, Pikachu or Super Mario. She throws light and gives voice through them to a sharp critique about environmental policies and our behavior in a society that does not look to the future. 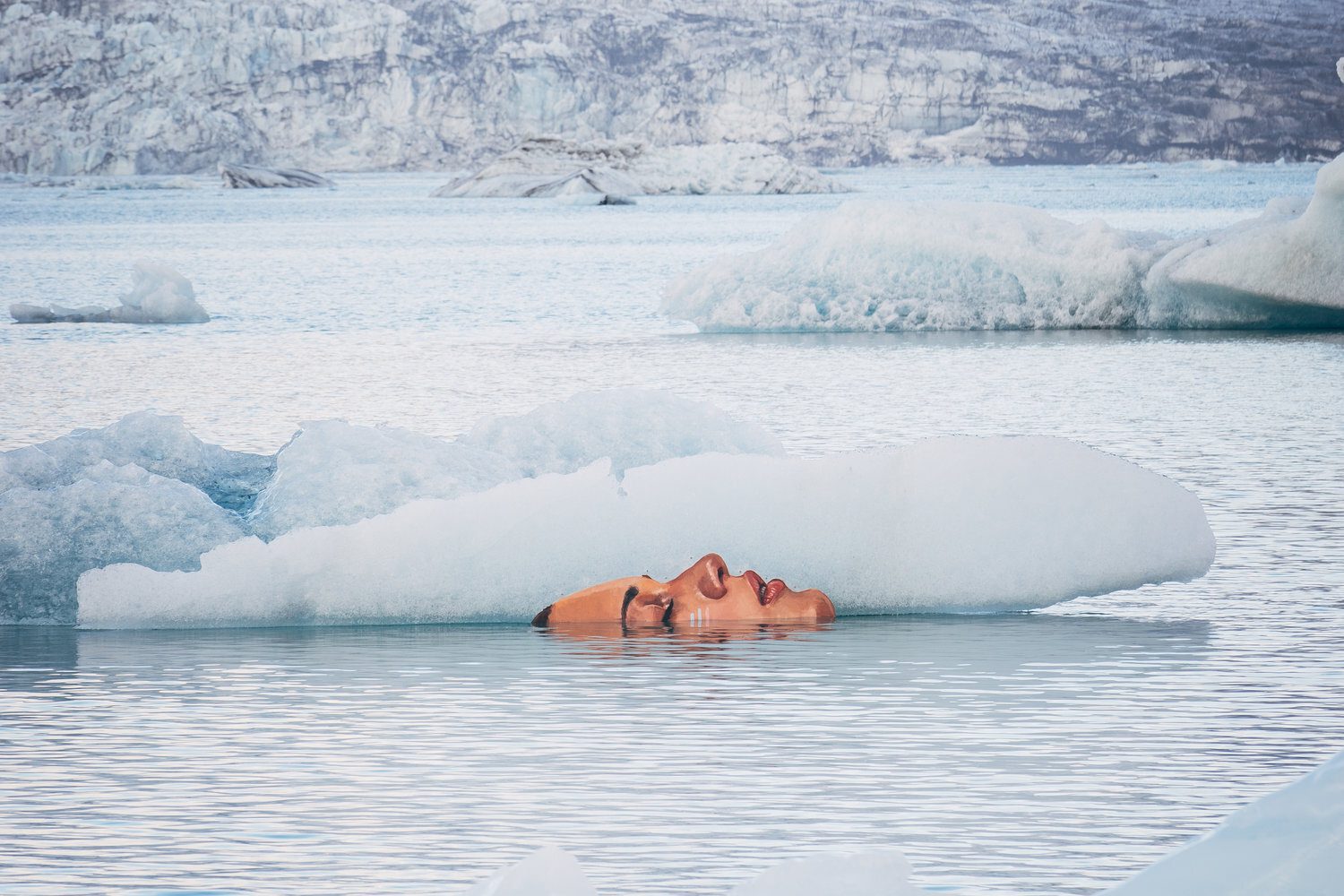 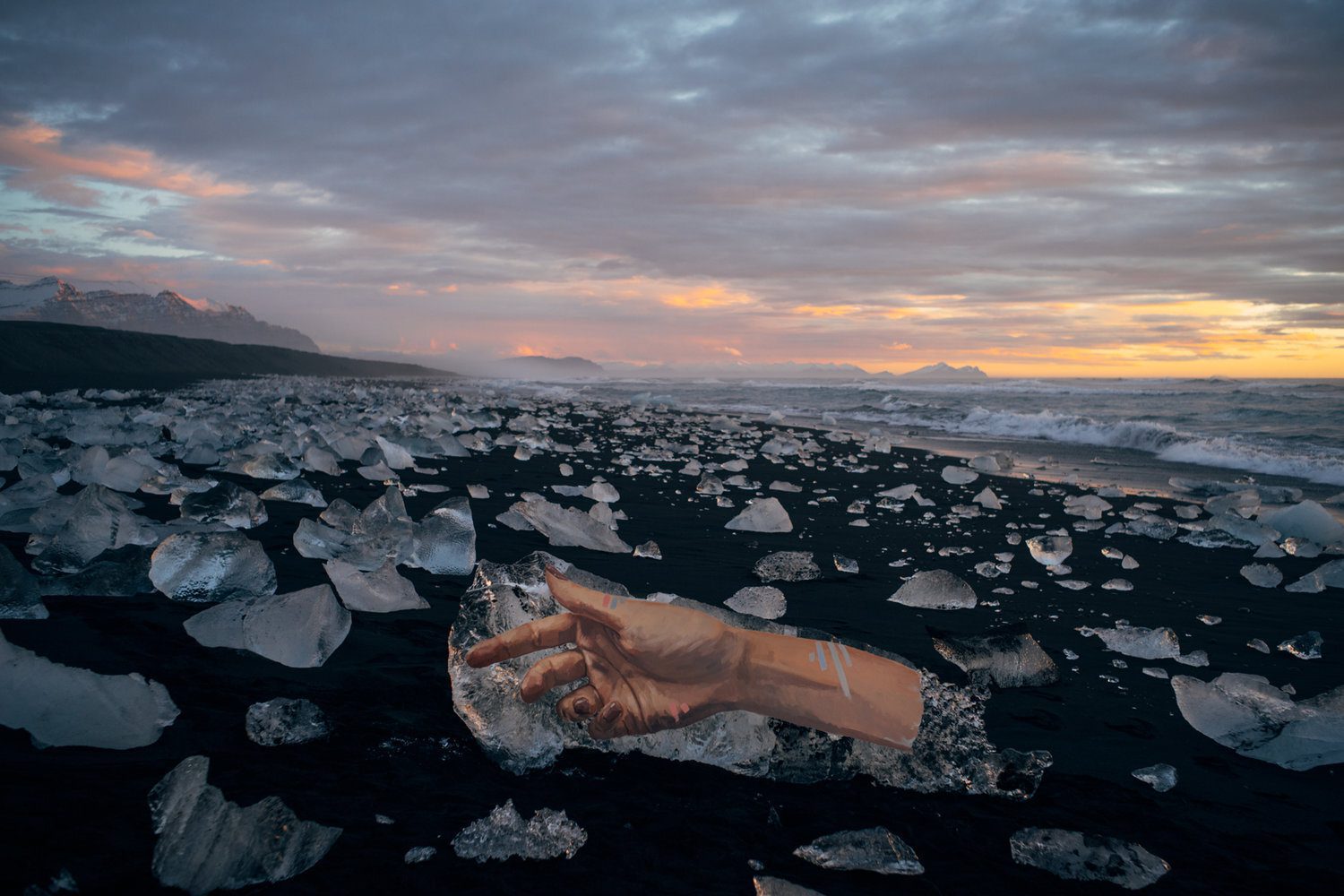 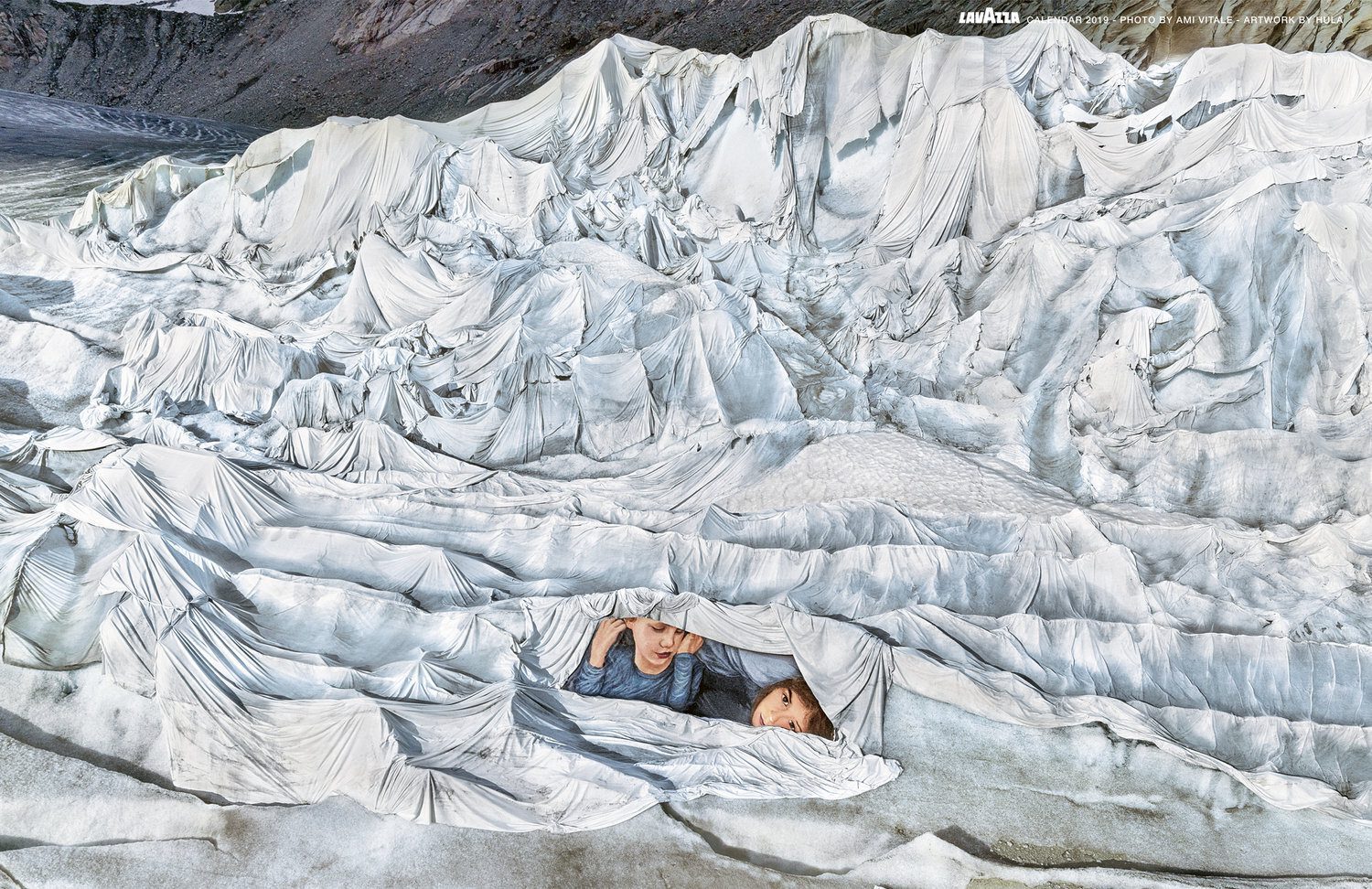 Sean Yoro aka Hula (Hawaii, 1989) is the name by which this artist is known, who along with his twin brother Kapu is one of the two legs of the Kapu Collective a project in which they explore the limits of art in nature. This duo combines their talents, -the first one as a visual artist and the second one as a photographer and creative- to create and capture different artistic forms in the most unusual media. Lovers of the waves and the seabed, Hulu has developed mural works floating on a surfboard attached with ropes to the surface to intervene and he has even gone further creating underwater paintings learning free diving techniques, as he did with the “Deep Seads” project. His works always leads us to reflect and create awareness about sustainability and care for the environment. They have painted in different critical areas around the world such as the Arctic where they used eco-friendly paintings. «For Earth Day, I wanted to emphasize the devastating news surrounding new glacier cracks and the overall loss of arctic ice over the last 6 months. My works are inspired by the urgent help our oceans need for the increasing list of issues from overfishing to pollution to dead zones and coral bleaching», says Hula. 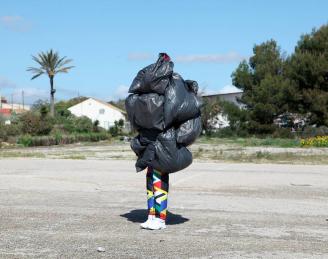 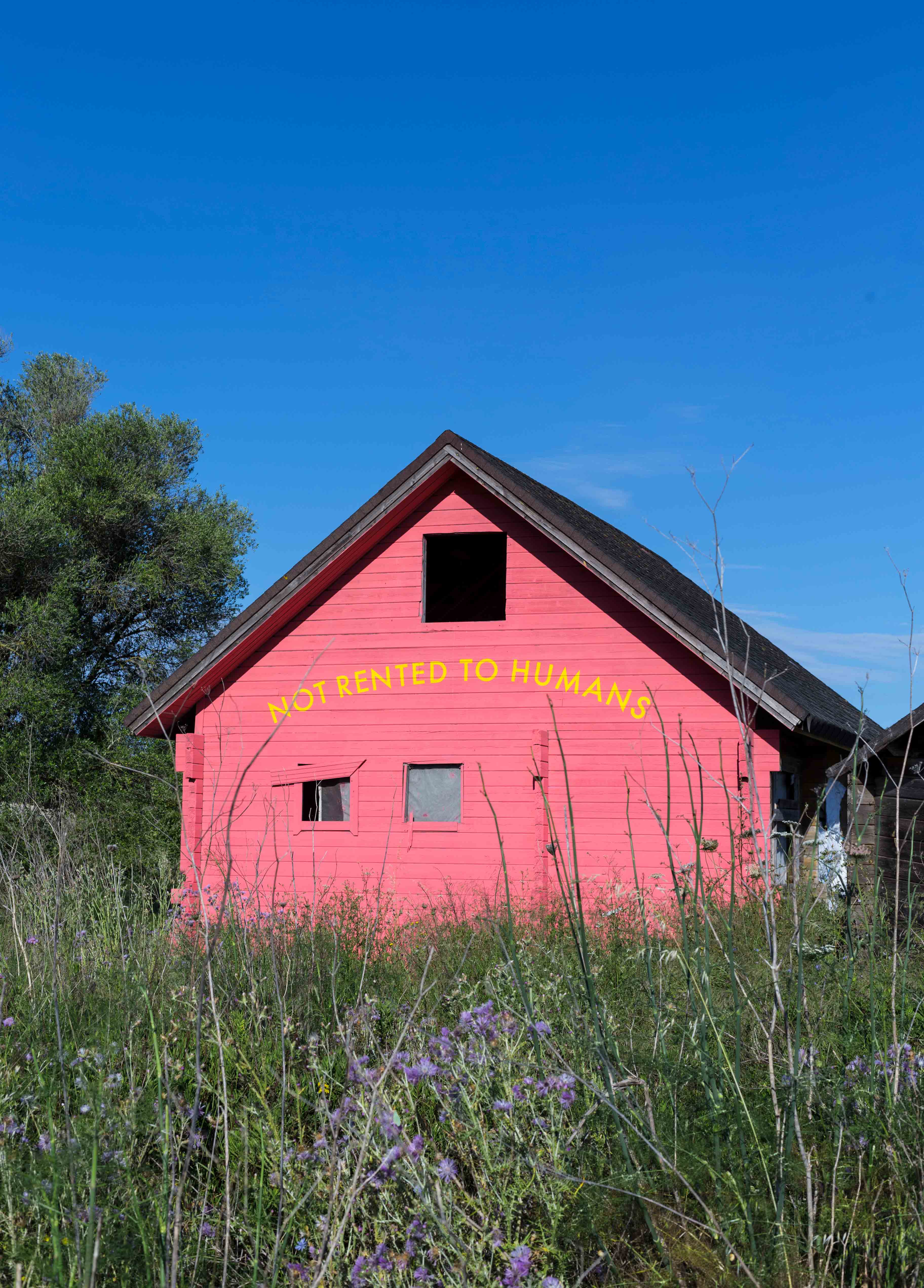 «I was born on a Mediterranean island, and the subject of plastic is something that worries me a lot. Seeing the process of destruction of a territory, the Balearic Islands in particular, and seeing the amount of plastic pollution that is increasing year after year has led me to do field studies to adapt it to my projects, conceptually shape it and bring it into my personal speech», says the artist Grip Face (1988, Palma de Mallorca), also during the talk held during Urvanity Art 2020 about art and the sustainability where he participated with Sixe Paredes. «The “Black Rubbish is the Future” project started out with a story I read in the newspaper where new generations of parents were asked about the future of their children facing the global climate crisis. The responses were all quite neutral, without much concern on the subject and that shocked me. I made a series of interventions turning a preadolescent of the future mutated with plastic garbage. I made a short film on this subject and in the last months I have been working on a documentary about it », he says. «”Not Rented to Humans” is another project I did last year in a space that I had been documenting for many years. After spending several days there, I realized that since human life had hardly existed for at least three decades, the vegetation had invaded the place. I liked showing that bridge between the super inhabited and the unpopulated places and that’s what the video is about», he continues. «This kind of projects help me make changes about myself before dogmatizing others. It is very difficult not to be contradictory to oneself if we talk about the issue of the industry and the suppliers of paint materials with which we works, who should make an effort to reduce toxic elements. On our side we have the responsibility to push for that to happen. Any enamel or paint we use has an imprint», concludes the Mallorcan artist. 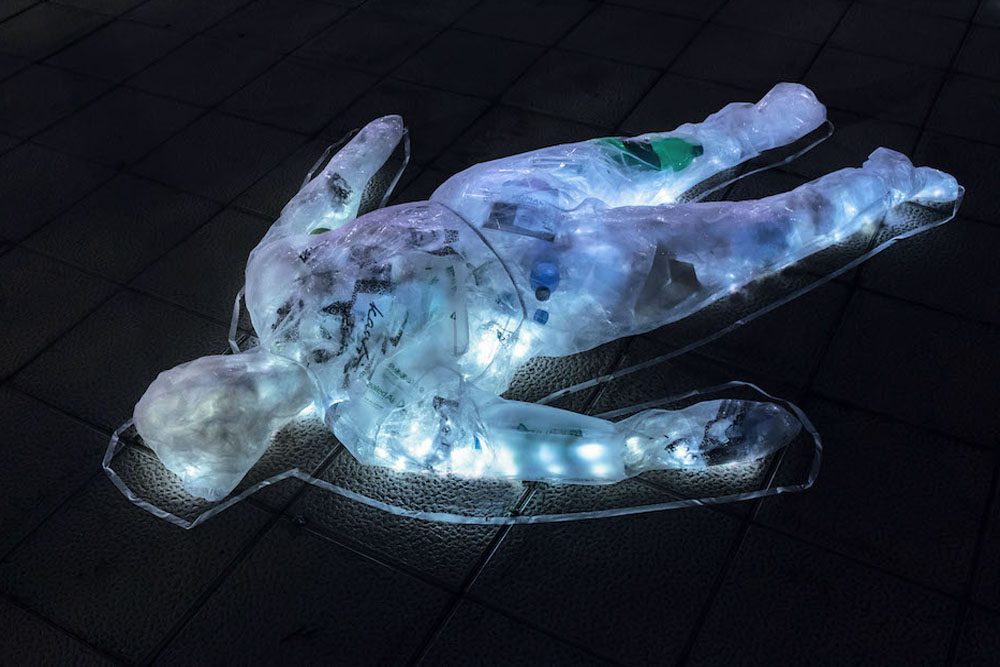 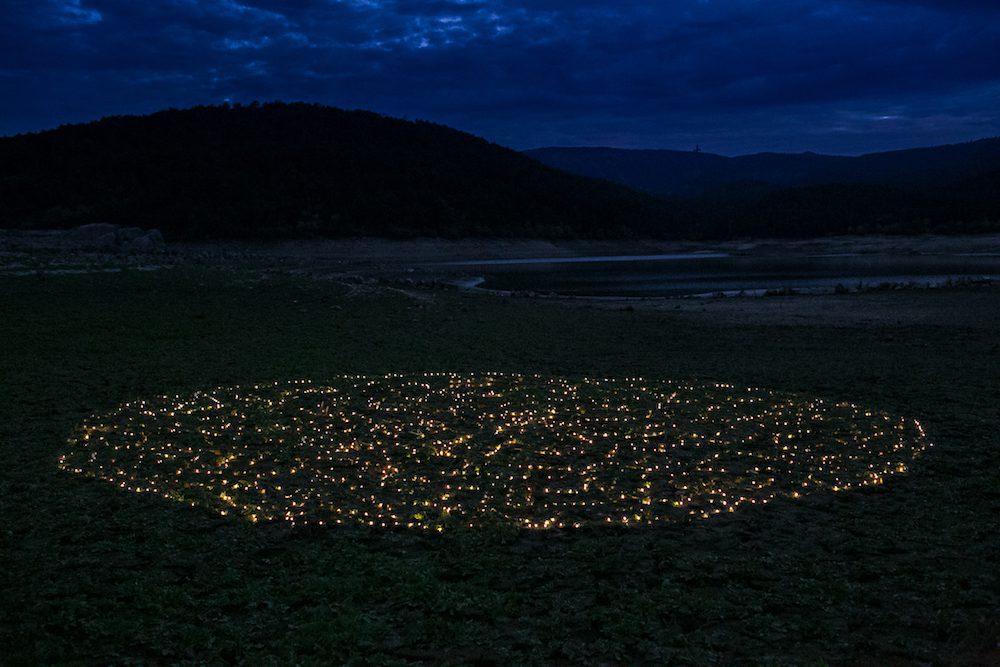 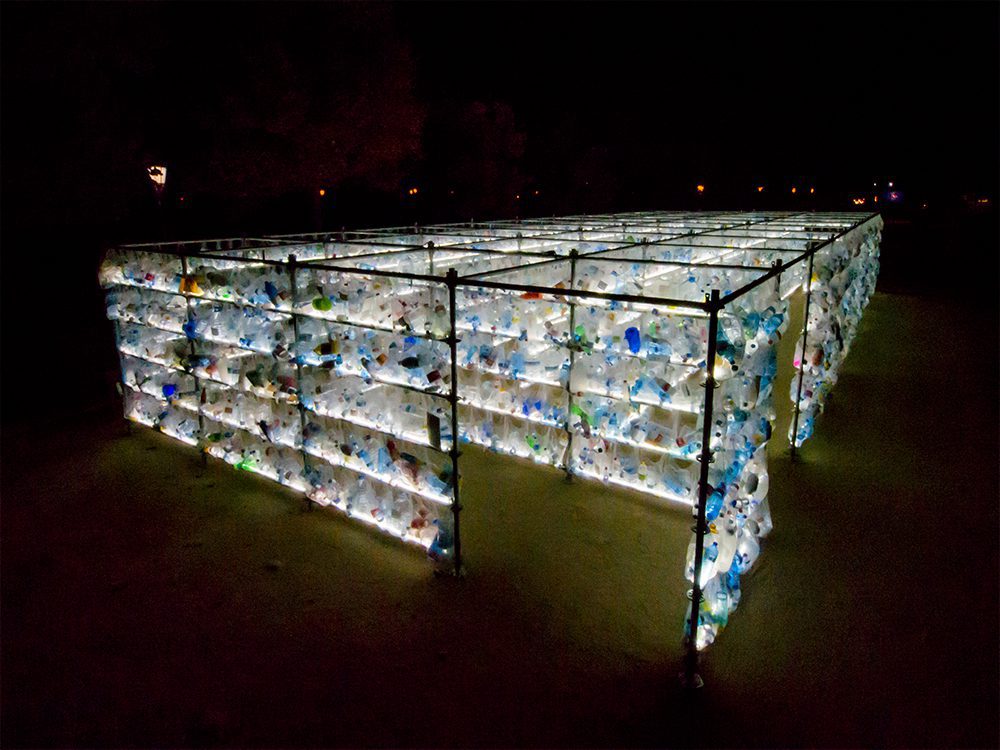 Luzinterruptus is an anonymous artistic collective that, as they say, carry out «small guerrilla installations, without much pretense and with more inventiveness than means, in which we can speak more freely about what interests us and in the format that we feel like». Their goal? Bring light (literally said) on environmental issues through actions in public spaces, although sometimes, the actions they carry out are purely aesthetic and aim to bring out from anonymity special places or objects that they randomly want to give them an artistic value. During the last Climate Summit held in Madrid during 2019 they carried out the installation ‘Death by plastic’: «In order to carry out this piece, we made skin with transparent fabric which we filled with plastic waste. It was easy to get as we only had to collect plastic waste generated from Christmas shopping days. It was funny to see how none of these shops provided their customers with plastic bags while, through their back door, they got rid of tons of plastic from their products’ packaging». Also, the ‘Drawing the drought’ project was one of the last ones to be carried out on the La Jarosa reservoir, in Madrid’s outskirts, which due to the lack of rain and high temperatures last summer saw its capacity dramatically reduced. «We made a circle of about 10 meters in diameter in the dry part and filled in the cracks caused by the drought with thin strips of light. We left the circle on until the dead of night and we finally picked everything up and left no trace behind. One of their best-known works, ‘Labyrinths of plastic waste’ has gone overseas and traveled from Madrid, where it was installed in the Plaza Mayor in 2017 to Buenos Aires in 2018.