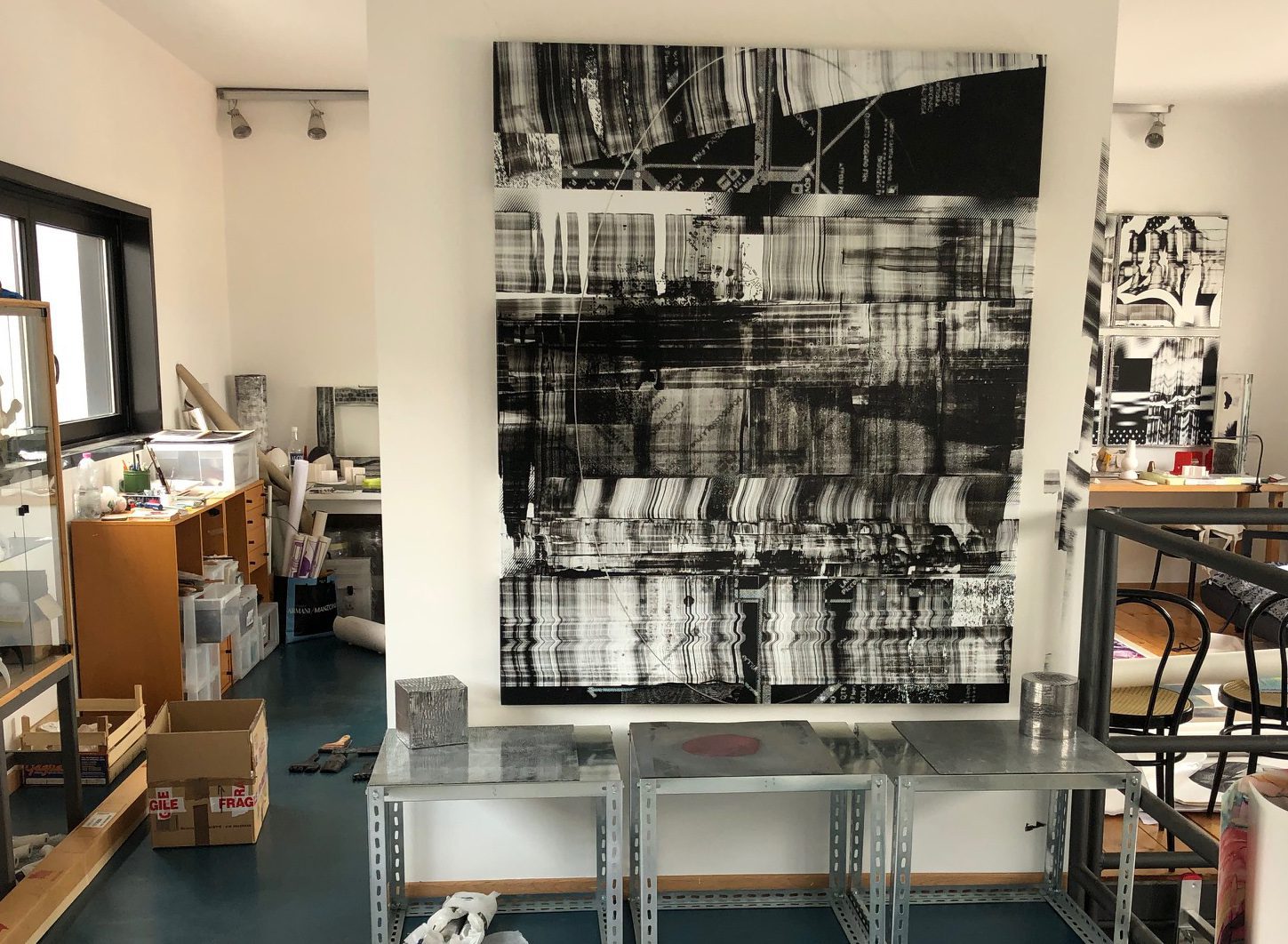 Jacopo Ceccarelli (Milan, 1981), better known as 2501 is an Italian multidisciplinary artist born in Milan. He pursued film and cinema studies and very early he started experimenting with lines, shapes and motion in different media such as painting, installations, sculpture, photography and film. In his twenties he moved to Sao Paolo in Brazil, where he developed some golden graffiti years influenced by the Brazilian ‘pixaçao’ style and experimented a period that strongly influenced his artwork. He develops a site specific and socially committed work that grows in constant dialogue with urban topography taking it mainly into the mural language. His artwork is focused on the process of the making itself, talking about the journey more than about the final result. In his studio he works on different materials such as ceramics, wood, aluminum, glass, and of course paint, sometimes mixing it with audio and video technologies to create some mind-blowing projects. About all of this and more upcoming projects we get to talk with 2501 from his studio located in Milan. Come and see! 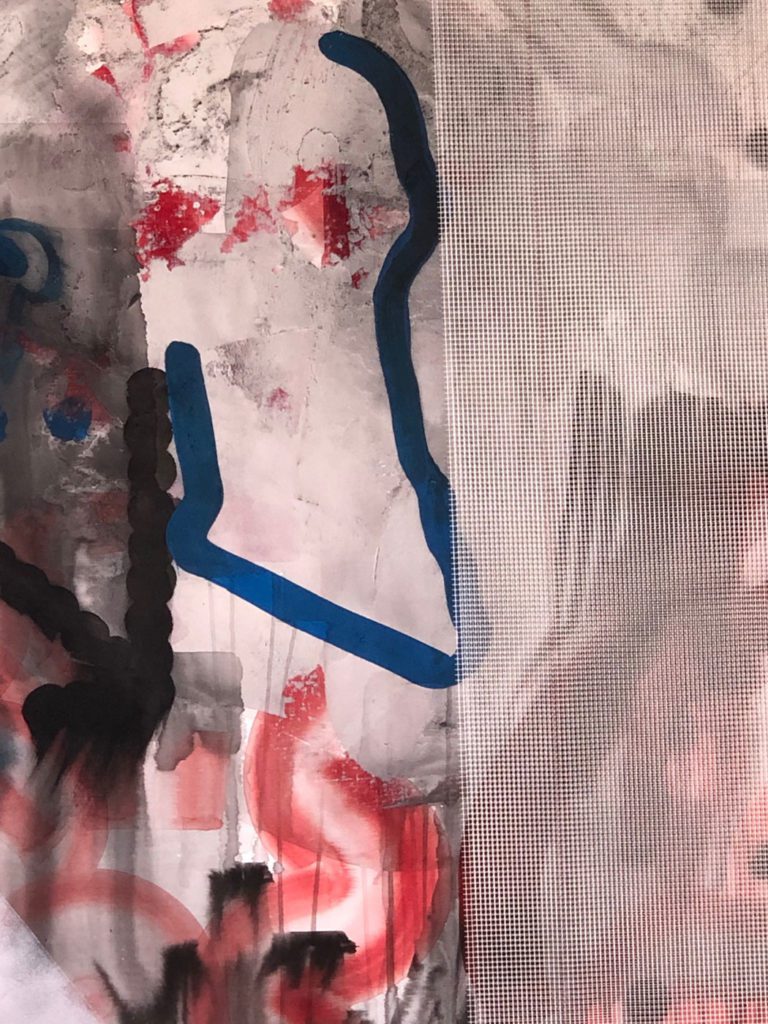 Some experimental artwork in his studio 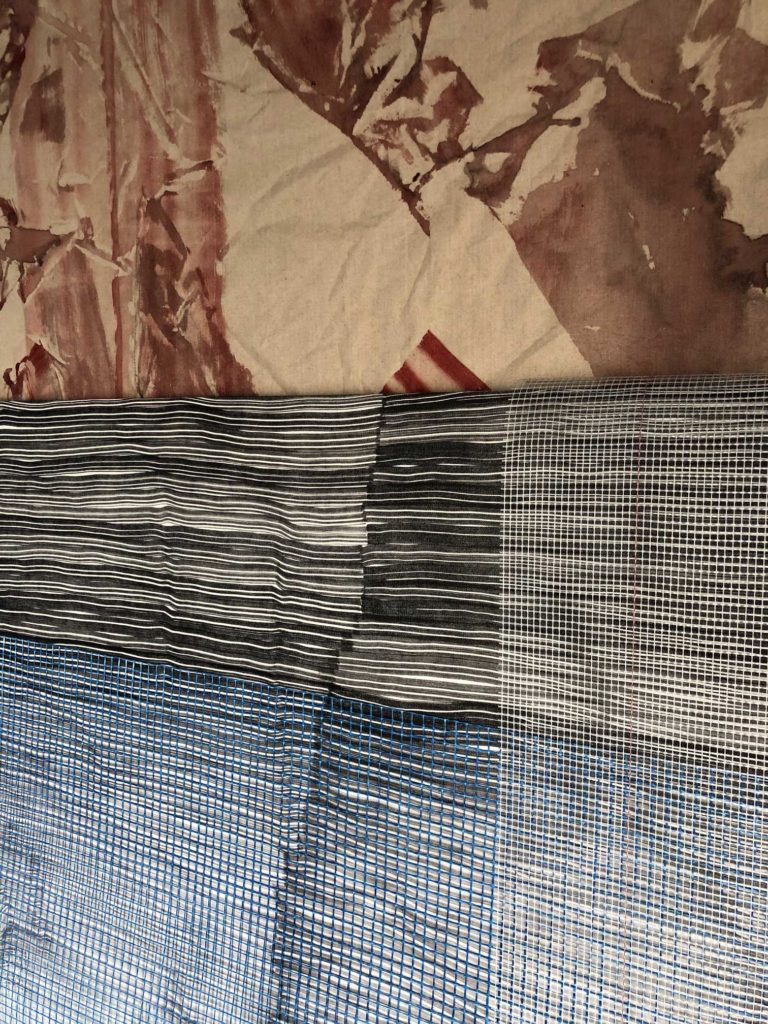 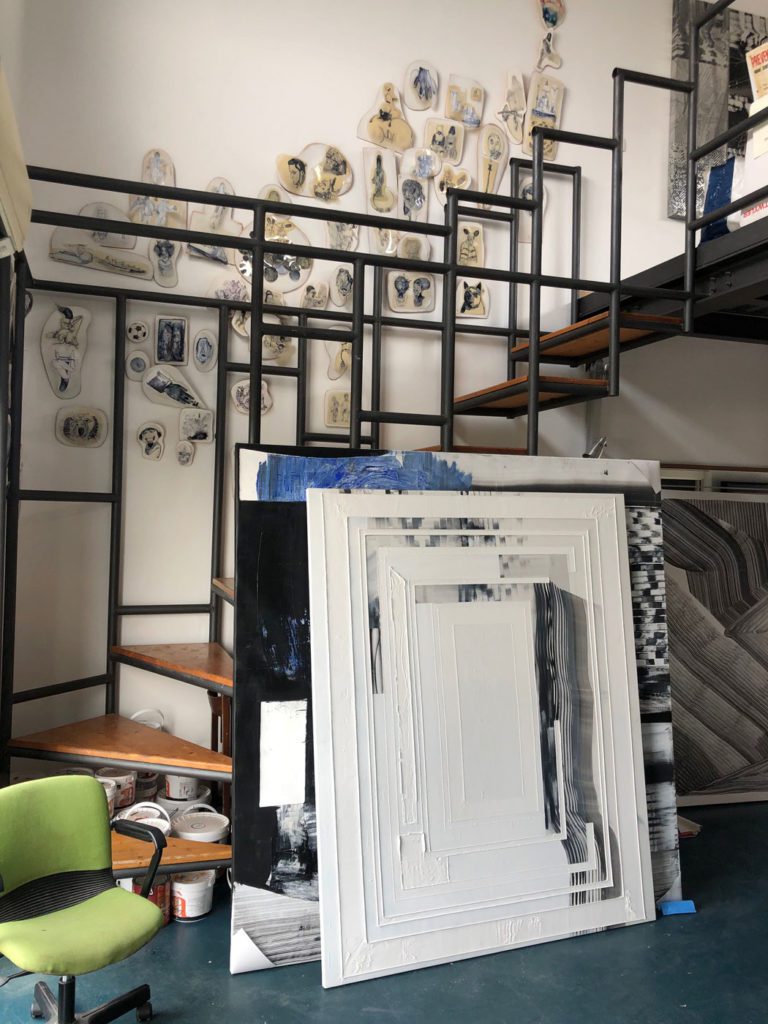 «I have this two floor studio since 2015. On the first level I have my space for production: painting, sculpting… and the upper part is where I organize my meetings with clients, where I have my personal stuff, develop projects…», says Jacopo Ceccarelli, better known as 2501 about his working space located in an industrial area of Milan. «This photos are of some of the works I’m doing now, they are some work in progress that I’ve been doing in the last two years. For the materials I use and the details it has this are really experimental works that deepens on textures and the action of erasing painting. I use paint and construction material to erase some parts of the same paintings I do. There’s gesso, concrete, construction nets… I really don’t know where these pieces will go, for me this is just a free moment where I can really experiment with stuff that and it can really differ from my work. They’ve been sitting here for a couple of years so somehow they became part of the studio itself», he continues. «You know what? I’ve never revealed this works to anybody, I don’t even know why I showed it to you!», says laughing. «But on the other side I think it’s cool because what we’re doing is to talk about the studio work, which includes this kind of stuff, not only the finished pieces that go to exhibitions. Anyways this is really something personal, it’s not ready still. Also think that showing them will give me a push to finish them», he admits. 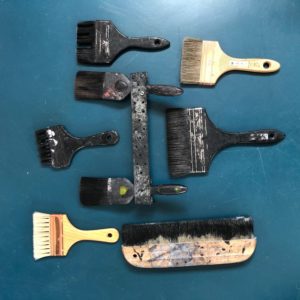 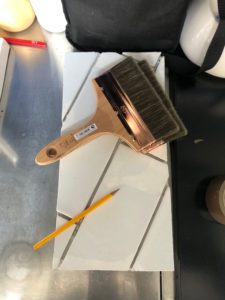 «The brushes for me are the starting point of my work », he says. To explain this we need to go back in time. 2501 didn’t studied painting at the University, in fact he did cinema and has been working on this field as an editor until 2010, even if he combined it with painting and doing shows. Painting became a common point for other projects that involved other media. «What I’m trying to do by painting is to describe the pictorial time. I don’t paint with a sketch, even if I work on a wall or a canvas, but I paint with ideas which I later evolve while the process of the painting. What I do is graphically represent the moment of painting, the work in progress. That’s the base of my work», continues 2501. Even if he works with video he does it on that one direction: trying to tell the story behind the painting or behind his installation. «If you get to know my work it’s more about the narrative, even if its abstract». So it’s the brushes the starting point of those narratives, they are the tools that allow 2501 to modulate and change his painting style. «When I started the line style -that I still do now- I used a normal square brush, I didn’t cut them yet, and I would modulate the lines by turning the brush, making thick or thin lines», he says alluding the special brushes that he uses and cuts himself allowing him to experiment with different thicknesses, negative spaces and textures. «That’s why I’ve been changing my way of doing lines, because also in this way I am experimenting processes on walls more than drawing other forms, it’s more the process of knowing what kind of tool you use and then react to the surface, to the architectural movement». 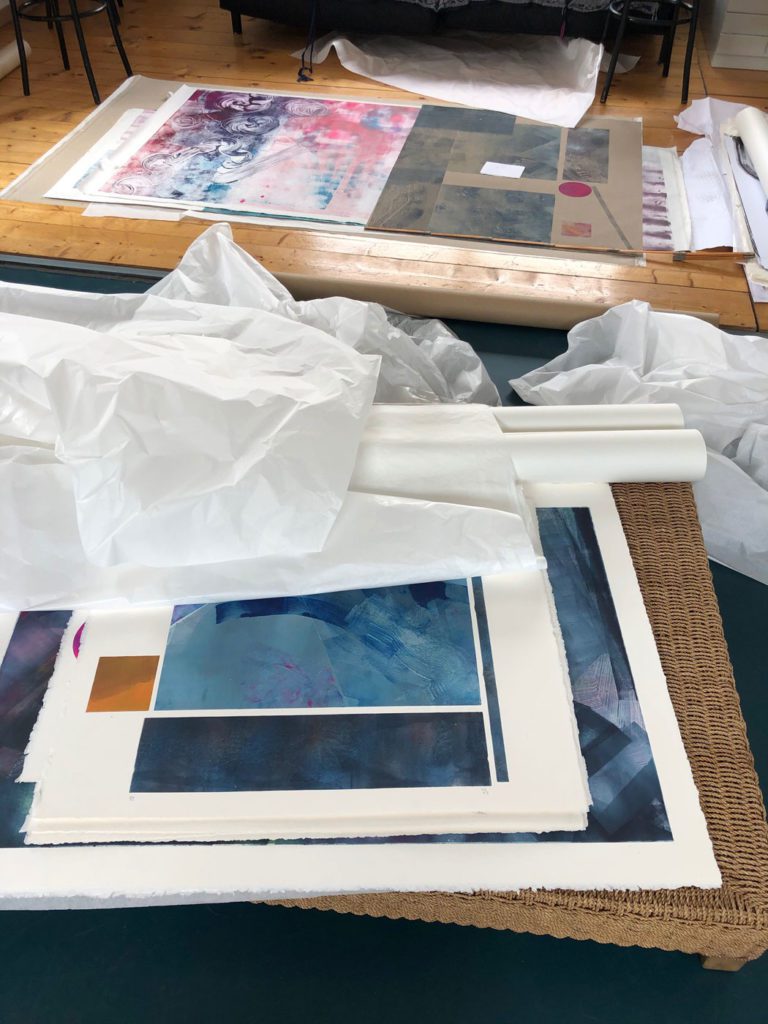 Monotypes for 1xRUN in Detroit

«These are the pieces I’m working on right now with 1xRUN space from Detroit. They are monotypes, which means they are original and you can only print one copy of each, it’s the transfer of a painting from Plexiglas to paper. The first ones you see in the picture are made on paper, the ones on the back are on canvas. The paper pieces are being released during this month of July on their website and the canvases are my work, it’s basically a work in progress and maybe I’ll use it for my next show. This is the way I usually work, I don’t just produce for shows but I work on paintings and then I basically use the series that I like or think that are better for this or that show in the moment I need them. For example now the shows I had were cancelled because of the Covid but during these months I’ve been working on several paintings and ideas that I had. I really like the work in progress, it’s part of my daily life», he continues.

«This piece hanging on the wall is a very interesting one from my last show in Wunderkammer Gallery», says 2501 about the piece he presented on the show named ‘Milano’, based on his city. «The interesting part is that this painting is not on canvas, it’s on bended aluminum, the same one that is used to build houses, it’s a construction material. What I did for the show was six paintings based on Milano’s map fragments with a silk-screening process on aluminum to intervene them after with a big squeegee in order to make my mark. I was basically destroying the painting before it dried on the metal. If you do a close up on the picture you will appreciate that all the distortions are handmade. In the piece and from top to bottom you can tell how my personal intervention with the squeegee goes from very little to finally not seeing the map at all, becoming an abstract painting. I paint and then I use the negative space instead of the color addition», adds about the process used on this different material with which even using different tools he gets to recreate very similar effects that what we see on his paintings using modified brushes. «All my work has some many different processes that it makes it so hard to explain. Even in Italian! So many materials, techniques… That’s the extra problem of the work I do. For me showing all of these finished projects or ideas through Instagram pictures it’s so hard, because you just get the final result. As I was saying before my work is about the process itself, so it’s about taking the public into this journey of discovering why I do what I do and how is it that I do it. I’m now working on building a new website because my projects need a lot of time and I need to be more specific on explanations of certain kind of works that I do. I want to show all of the ideas behind my works», he says. 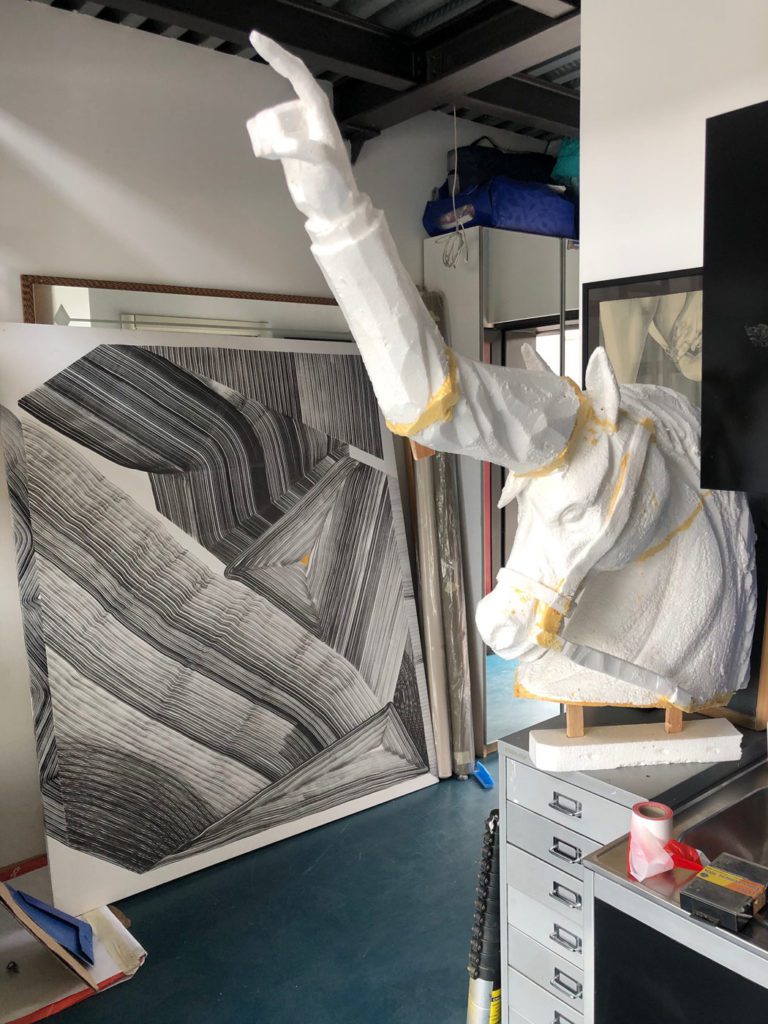 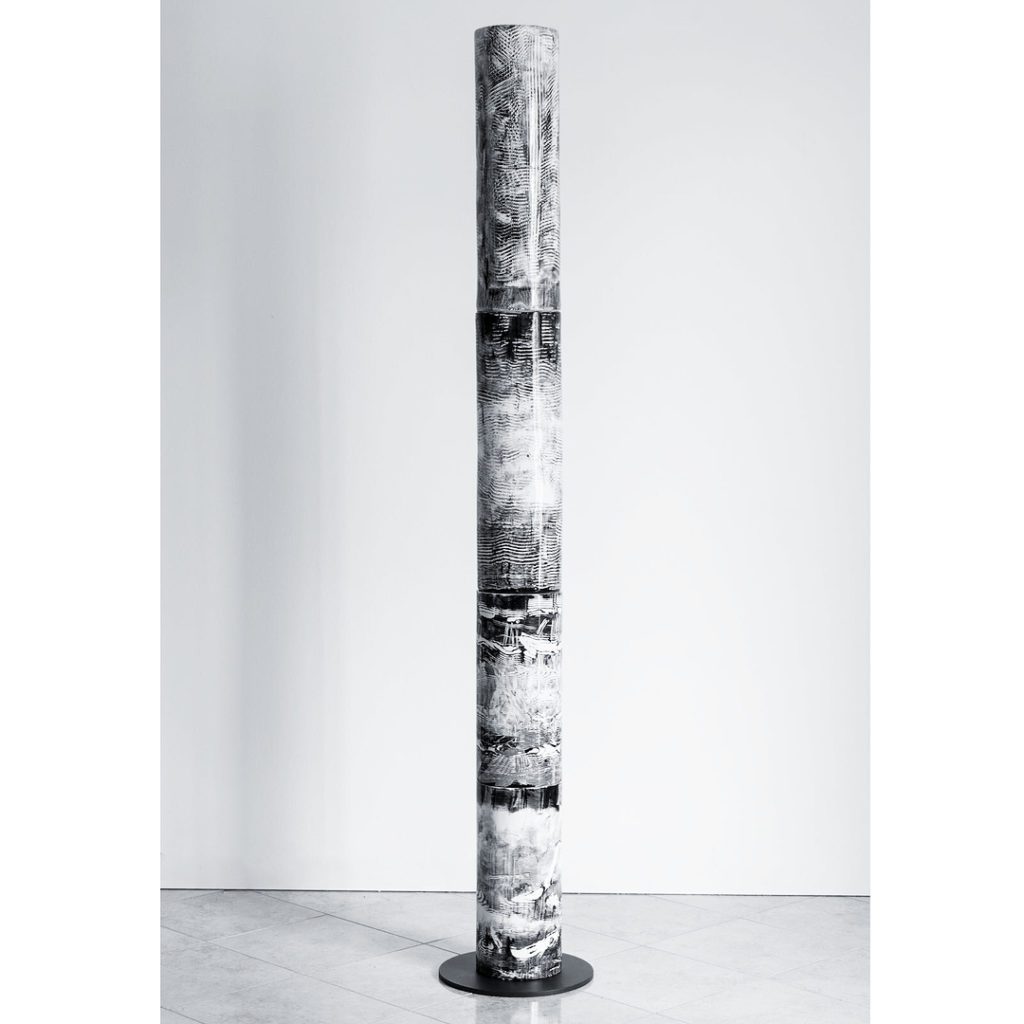 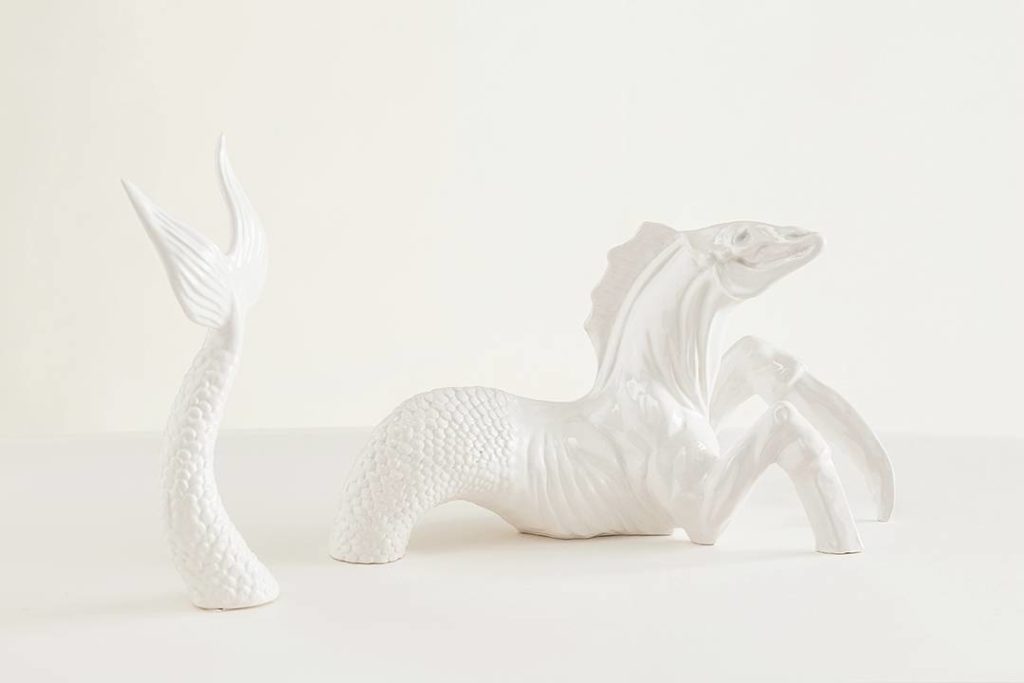 ‘Hipocampo’ a ceramic piece made for Alexis Diaz

«This horse sculpture was made by my friend artist Franco Fasoli, and it has become part of the studio. With Franco we started ‘Piattaforma’, a friendly brand under which we produce some ceramic sculptures for other artists. Franco helped me doing the originals, he molded one for Alexis Diaz (the ‘Hipocampo’ sea horse mutation on the picture above) and another for Basik. I was producing and he was modeling the ceramics. This was during the time Franco was in Italy and he came to my studio to help made the original pieces, this is how we started this little adventure that I’m still developing nowadays even if Franco and I just worked together doing this on that time. The horse head is Franco’s own sculpture for the exhibition but he never showed it since he started working and releasing some other bronze works so I kept the original», says 2501. «‘Piattaforma’ started because I work a lot with ceramics too. Like this 2-meter high column and this other one using some technological techniques», says about the two last pictures of ceramic pieces he has developed in the last years. «Behind the horse hanging on the wall I have a small drawing that Faith XLVII gave me. We know each other for a long time so when she came to Milan for her show we exchanged pieces», he adds. 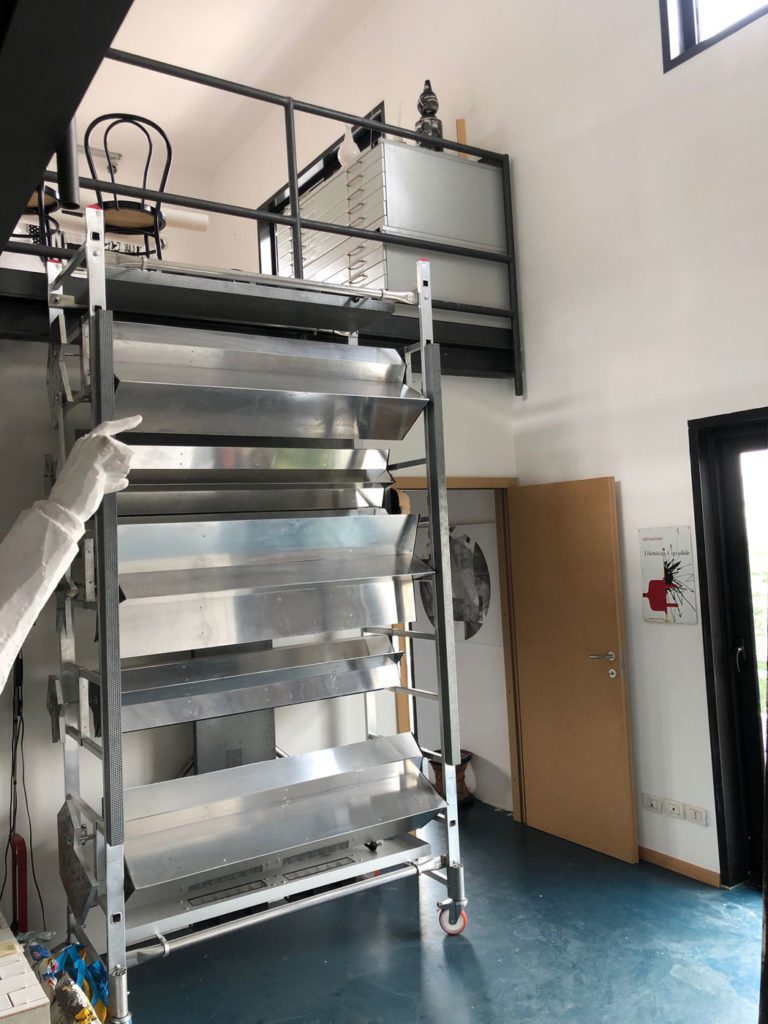 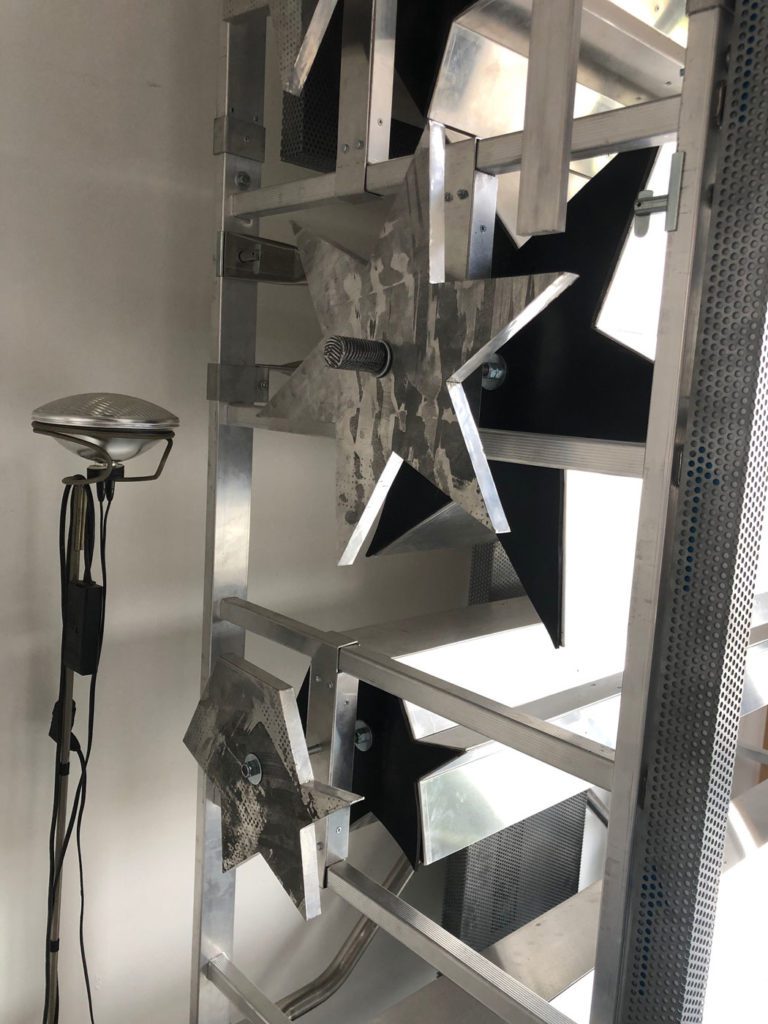 Close up to the last piece he created for ‘La Macchina’ 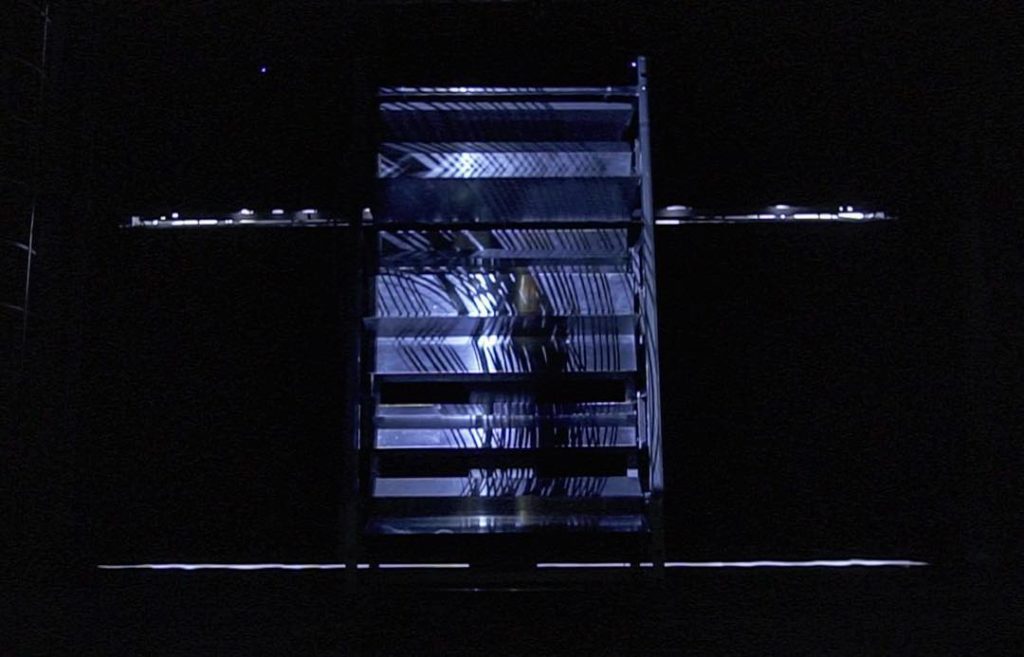 «This steel machine it’s the last part I created of ‘La Macchina’, a big project that has been going on for the last seven or eight years. I’ve shown it in Los Angeles during a show, also at Juxtapoz Club House during Miami Art Basel, in Berlin’s Urban Nation Museum… It’s been around pretty much», says 2501 about his project ‘La Macchina’, one of his most impressive projects in which through a sort of turntable mechanism and different technical processes he transform his paintings into sound in real time. «It’s a work I’ve doing in collaboration with recipient.cc, a platform that helps me build my ideas when I work with digital and technological work. To make people see what I draw I project the output, a software is analyzing with a webcam what I draw on this turntable that instead of having a normal vinyl in this case has a white paper vinyl. This part of ‘La Macchina’ in the picture is called M.U.R.O, which in Italian means wall. Basically the structure of this ‘wall’ is a scaffolding and inside it I have these handmade aluminum shapes that rotate and are reflected by a set of stroboscopic lights. Like a kinetic sculpture used as a screen when I start using ‘La Macchina’ I project the image on this screen that moves and it becomes a sort of an instrumental piece», says about its complex mechanism. «My work is always a full circle, it feeds itself continuously. In the seven years that I’ve been working on ‘La Macchina’, I have always come out with new pieces, new concepts, new ways of using this software and so this one was the last part of the project. It’s better to see a video to understand it! It’s easy once you see it but so hard to explain!», he says.