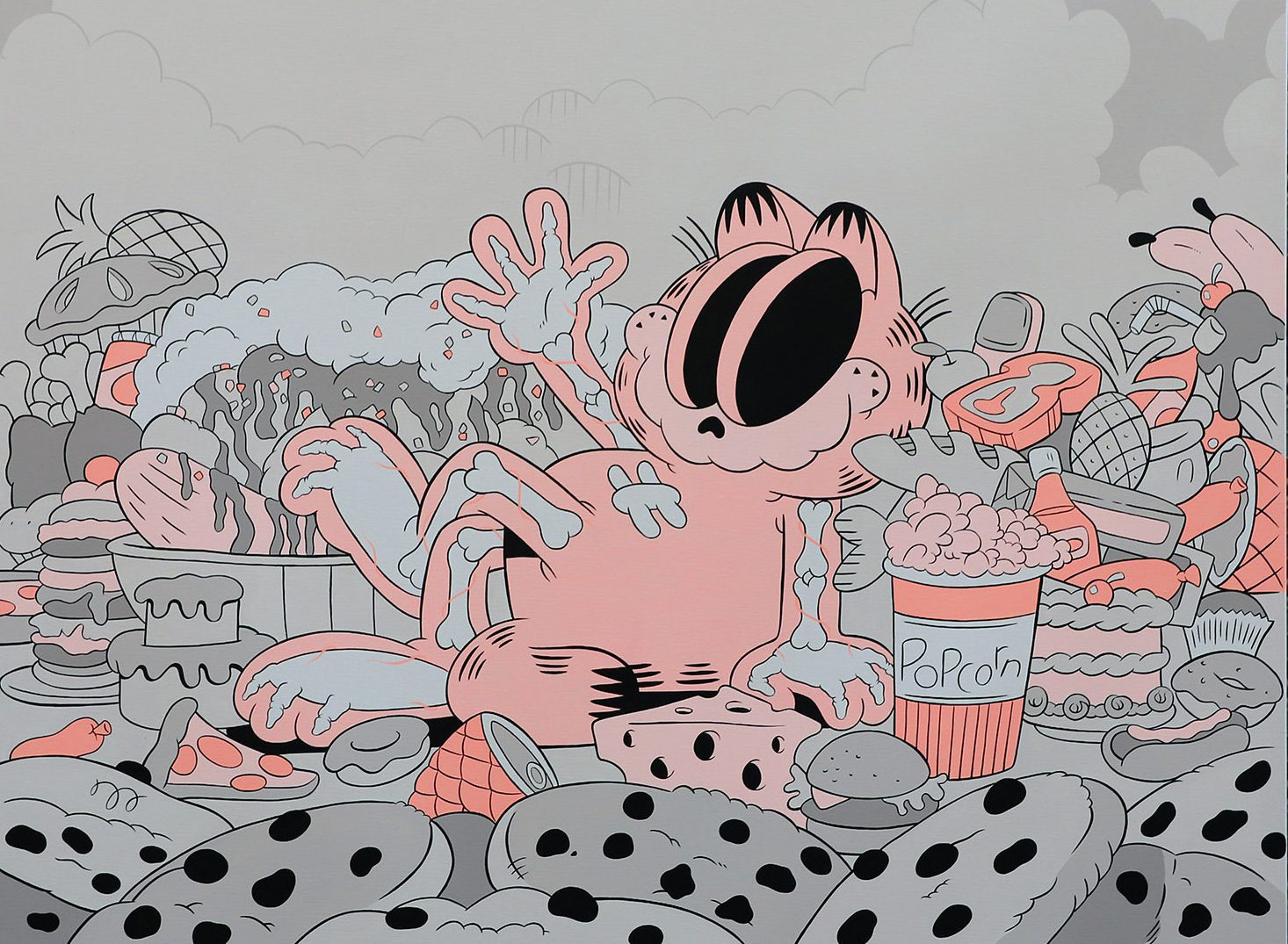 We are back this month with a new fresh edition of cultural recommendations by some of our favorite international artists. This July we sneaked into the black and white cartoon world of the Spanish illustrator Coté Escrivá to learn about the vintage Disney comic books that inspire him, we review the full-color artwork of the Japanese artist based in Barcelona Mina Hamada to get to know her favorite Japanese manga cartoonists, we update our summer’s playlist with the hottest hits by the Uruguayan Theic Licuado and discover the YouTube channel ‘Jubilee’, a deeper point of view on current issues with the Portuguese AkaCorleone. Discover their personal imaginary and sneak into the world of each artist. Take note!

Coté Escrivá (Valencia, 1982) is an artist and illustrator living and working in Valencia. Nourished by urban culture and pop aesthetics, he brings to life animated characters, as tender as macabre, using his own style in which it plays with death elements that lead him into different formats and supports, working both on canvas, sculptures, toys, drawings or even led to graphic design. Snoopy, Mickey Mouse or Goofy are some of the characters that he plays with, giving them a twist. Internationally known, his work is easily recognized at art fairs around the world and has been exhibited in cities such as Barcelona, Los Angeles, London and Singapore. 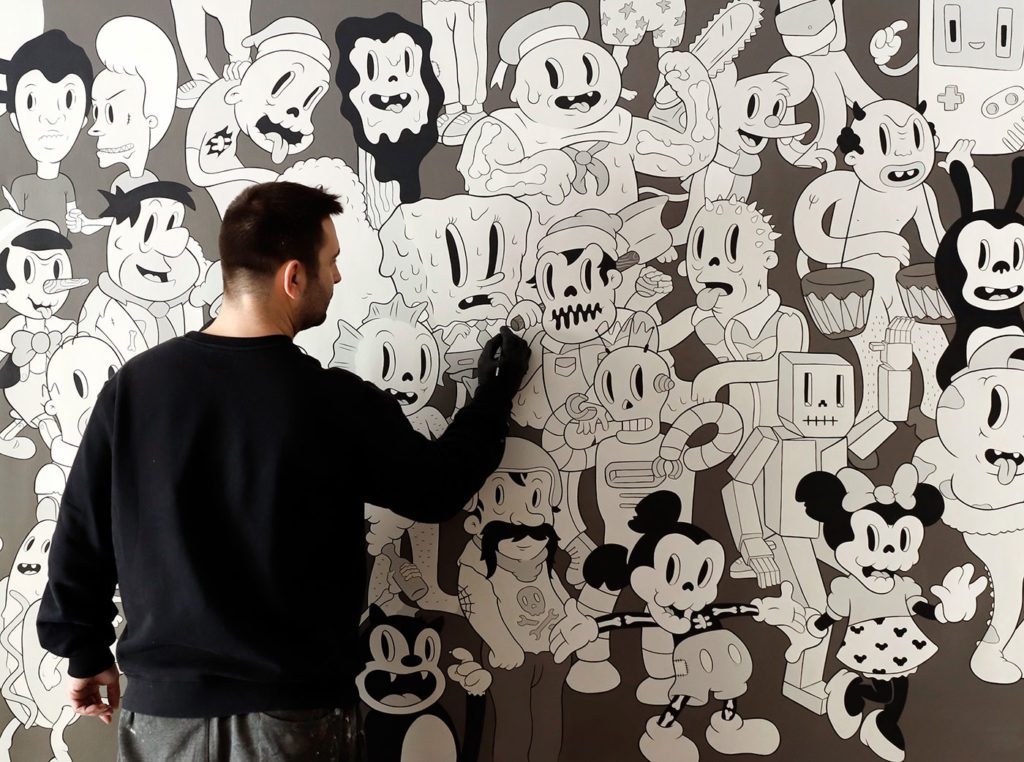 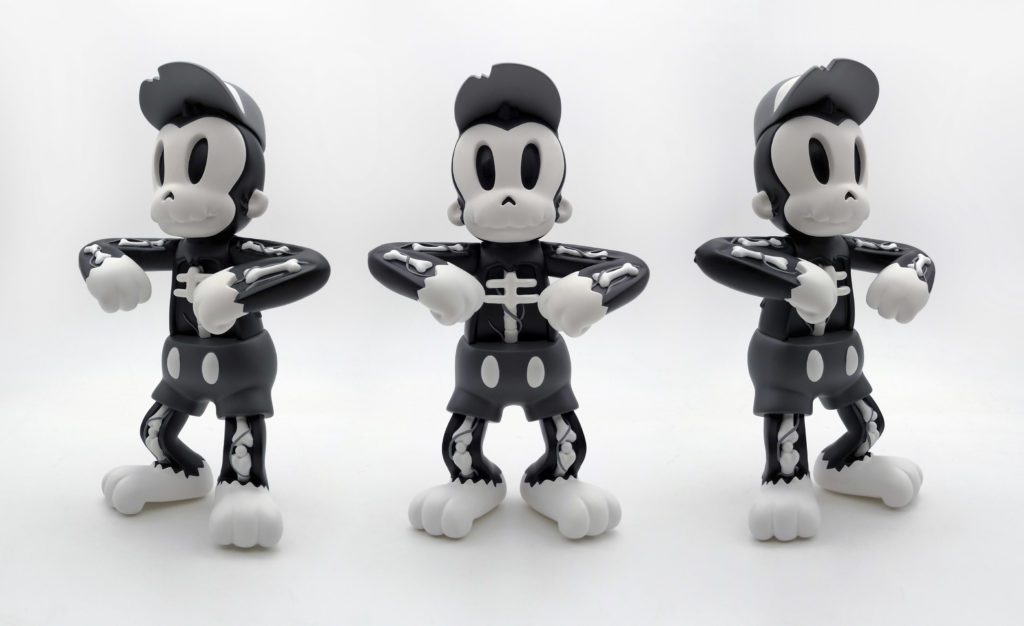 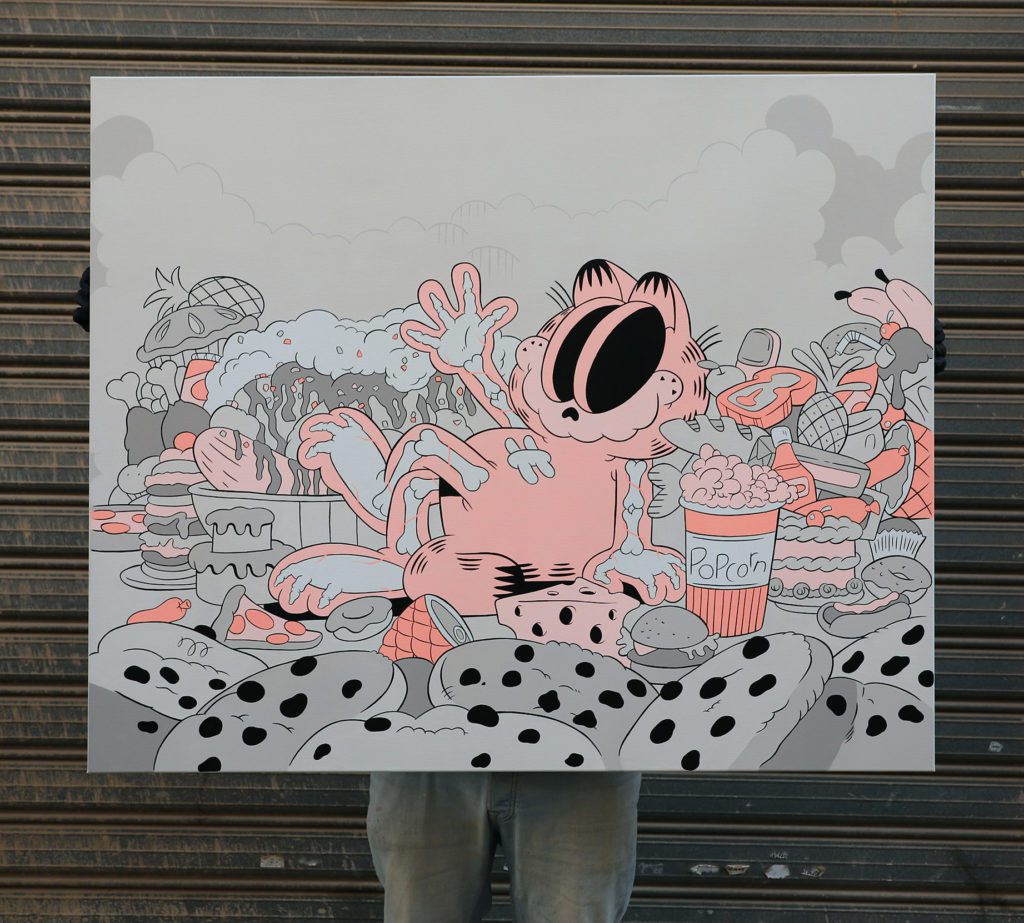 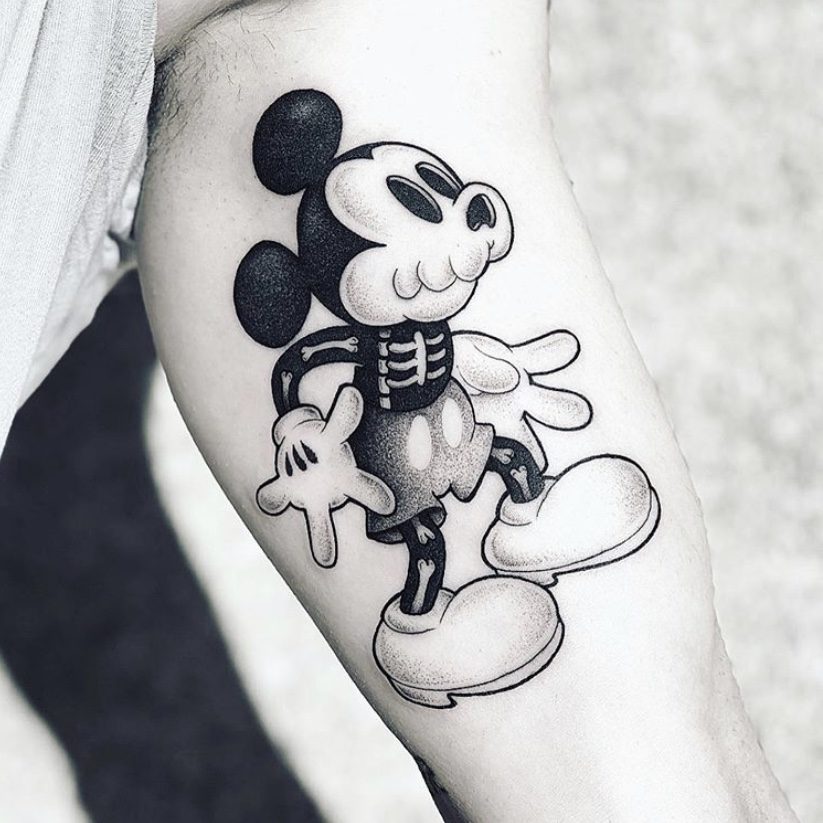 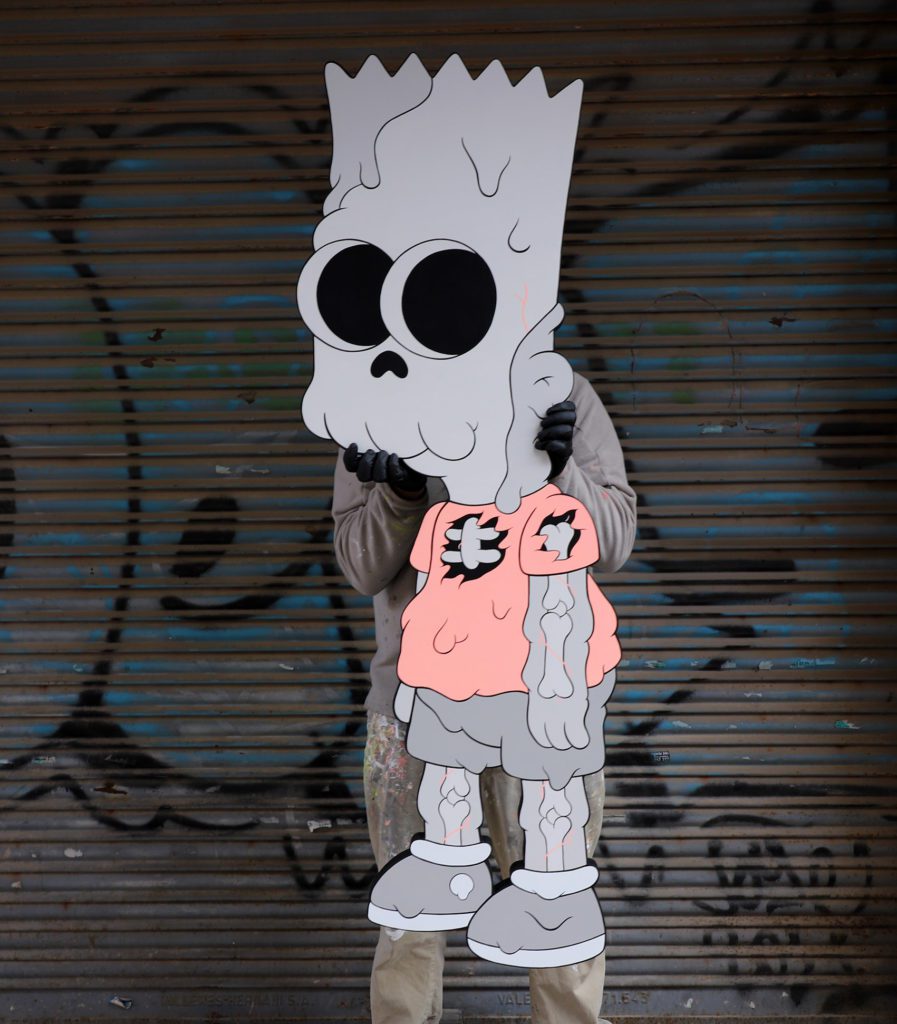 «Lately I have been reading vintage Disney comics from the 50s, 60s and 70s. At some point I would like to get my hands on my own comic so I’m starting to get some ideas, it’s funny how simple they are and how current (or universal) their stories still are. I also like reading Juxtapoz magazine, in addition to having an interesting point of view, it helps me improve my English. I just bought ‘The Black Hole’, Charles Burns graphic novel. I’ve just been through its pages and the illustrations are incredible, it has also been very successful, can’t wait to get started this summer.

I’m always on the lookout for podcasts to listen to while I work. One of my favorites is the Spanish ‘El sentido de la birra’ by Ricardo Moyá, who interviews very cool people in a very discerning tone, in between drinking some beers. I also really like the Spotify podcasts by your Urvanity colleague Vdevictoria, her interviews to artists are super interesting, also in Spanish.

I was surprised by the latest Recycled J music release, ‘Superpoderes’, especially the video clip. Also Natos y Waor got me with their last album, I am a huge fan.

I just discovered the series ‘Ozark’, the plot is quite typical, the main character launders money from a drug dealer, but things start to get a bit complicated. The development of the characters, the photography… It’s very good, seriously! At this point I suppose that almost everyone has seen ‘The Last Dance’. Very epic everything Michael Jordan has achieved. I did not know the whole story and it is very well narrated, highly recommended».

Free forms and figures drawn from her imagination bring to life the full-color artwork of the Japanese -American born-, raised in Tokyo artist Mina Hamada (Louisiana, 1981). Her harmonious compositions are characterized by a balanced use of flat shapes, rhythm and colors that give her work a fresh air that comes together with a more naive and childish brush strokes. Mina arrived in Barcelona in 2009 to study ‘Typography and Hispanic Studies’ and it was there that she met her artistic partner, the Argentine adopted by the Catalan city Zosen Bandido. Together they have traveled half the world painting large-scale murals and fusing their styles until becoming the perfect artistic match. 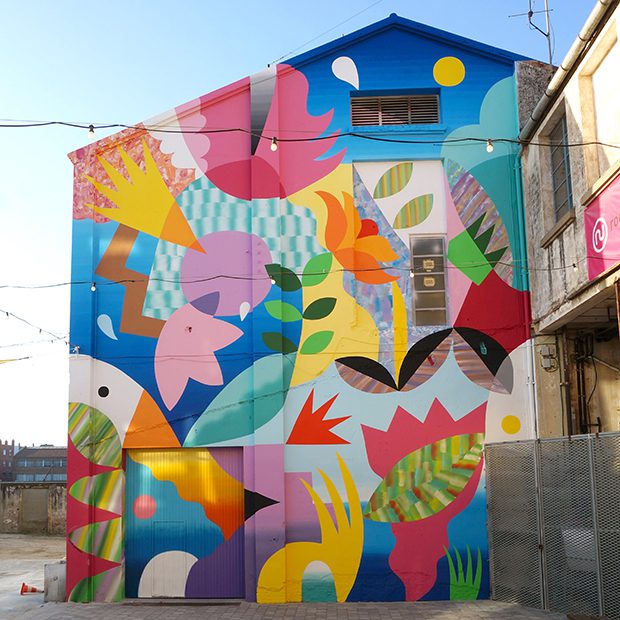 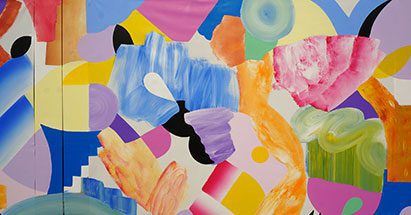 «Since I was little I have always loved reading books that contained many drawings such as the illustrated encyclopedia that was full of insects and other animals. Until I learned to read by myself I would ask my mom every day to read them for me. So I have many children’s books, they bring me many memories. I was now rummaging through my bookshelf and I came across ‘Dorobou Gakkou’ (‘School of Thieves’) by the Japanese author Satoshi Kako. It’s about a school that teaches its students how to be thieves. There is a super master thief and the students do their homework and field trips at night to steal. It’s really silly and they do a lot of fun things. I love the retro-classic style of the drawings, very beautiful. Another Japanese children’s book artist I really like is Shinta Cho. I have at home the manga story ‘Nanjya Monjya Hakase’, very surreal and strange but so idyllic and relaxed at the same time.

There’re very good manga works in my country but I like ‘Nausicaä from the Valley of the Wind’ by Hayao Miyazaki, which is the original story of the film by Studio Ghilbi. Much deeper and stronger. After reading this book you can probably feel a lot of hatred for humans but at the same time provokes a lot of love.

Through Instagram I found the account of a Japanese painter who died in 2005 and I really liked it. Her name is Shisuko Tomoto (@shisuko_tomoto account is still open), she was born in 1913 and started painting at 53 years old. Her paintings are totally free, dynamic and very powerful. I would have loved to meet her in person, I imagine her as a granny with a lot of energy.

My last recommendation is another book, but not Japanese this time. It’s called ‘Mask Arts Of Mexico’ by Ruth D. Lechuga & Chloé Sayer. I lived there for a little while 18 years ago and fell in love with the colors, crafts and folk art of Mexico. It seems to me a country with a lot of magic».

The Uruguayan artist based in Montevideo, Camilo Núñez (1989, Buenos Aires -yes, Argentinian born) better known as Theic Licuado, is known for his figurative large scale murals, but you will also recognize him in other smaller formats on canvas and paper. Together with Fitz (Florencia Durán), they form Colectivo Licuado, an artistic duo with whom they travel painting murals around the world and participating in Street Art projects and festivals in cities such as Berlin, Santiago de Chile, Buenos Aires, New Delhi, Rome or Vienna among others. With a special interest in classical painting, Greek, Egyptian and Roman mythology, Theic’s work takes a strong inspiration not only from it but also from the technique and concept of ancient art. 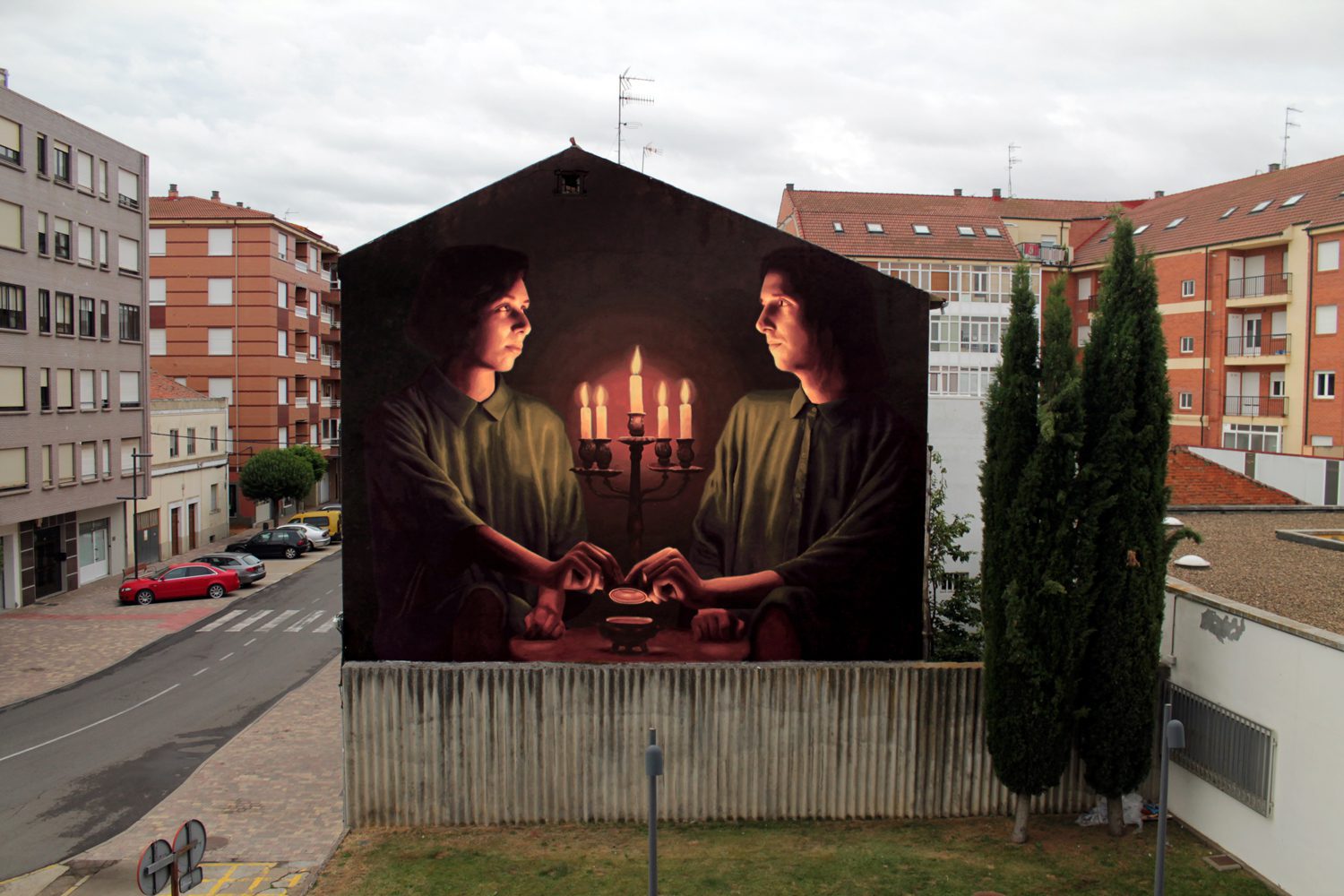 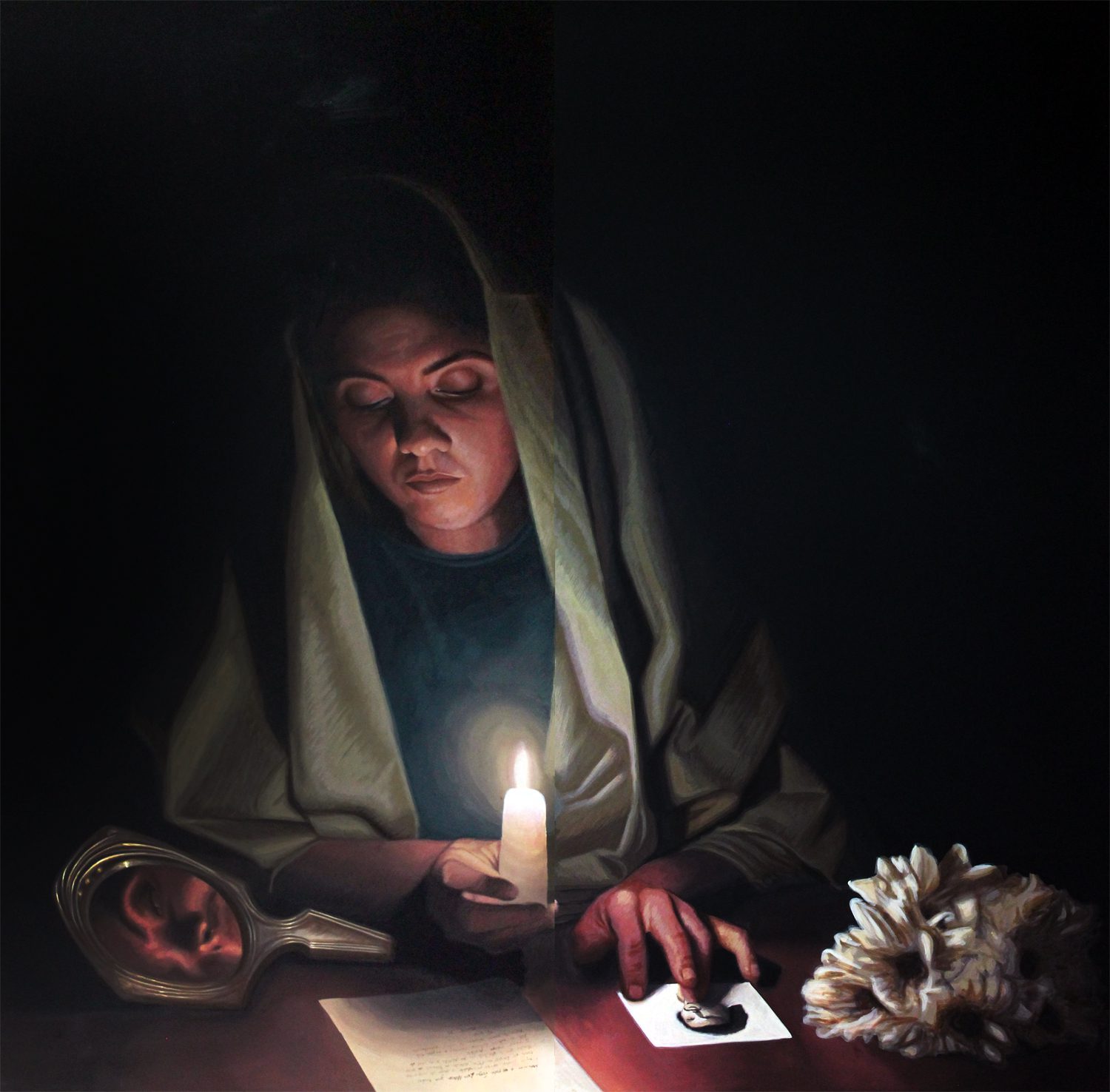 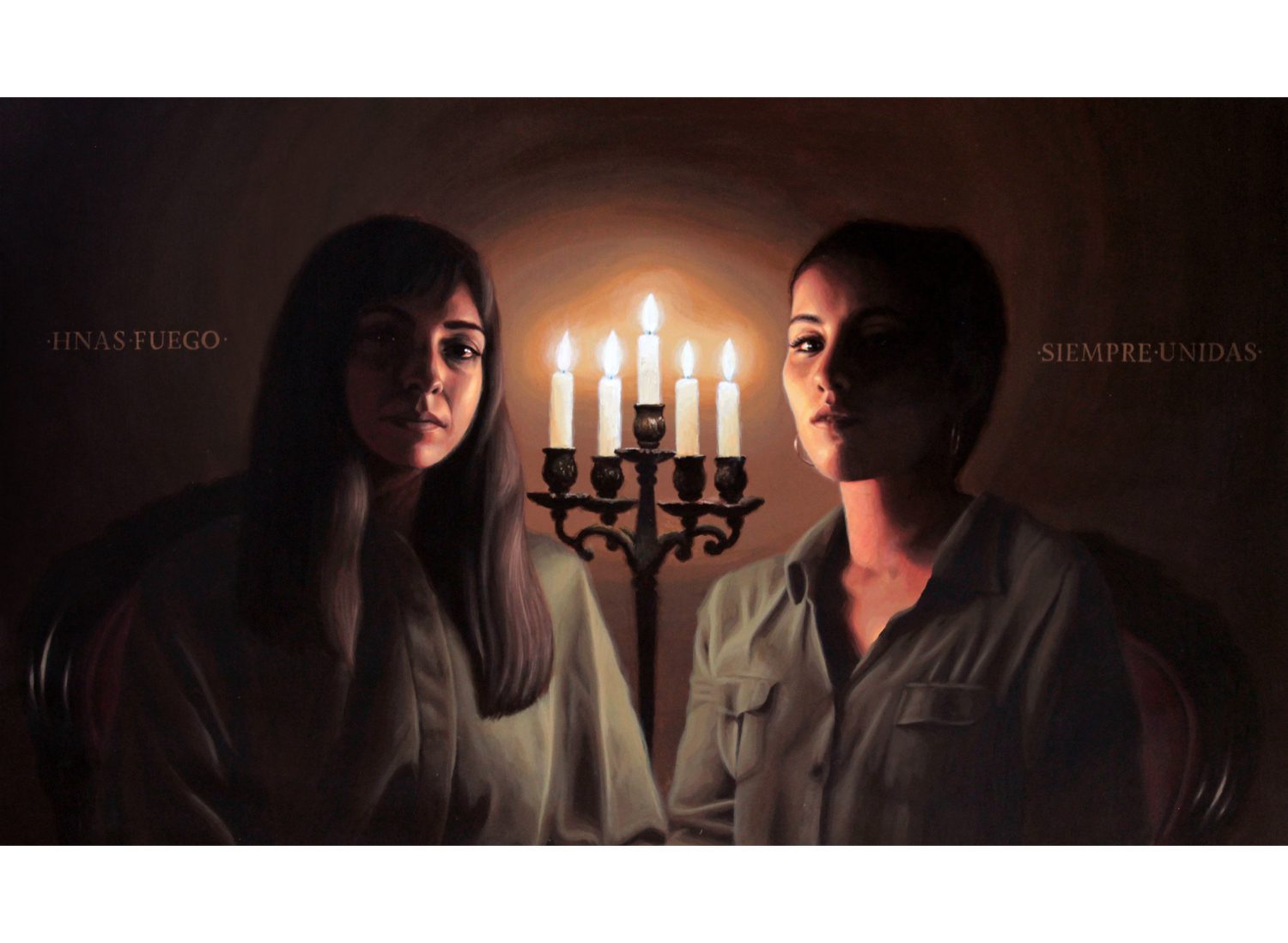 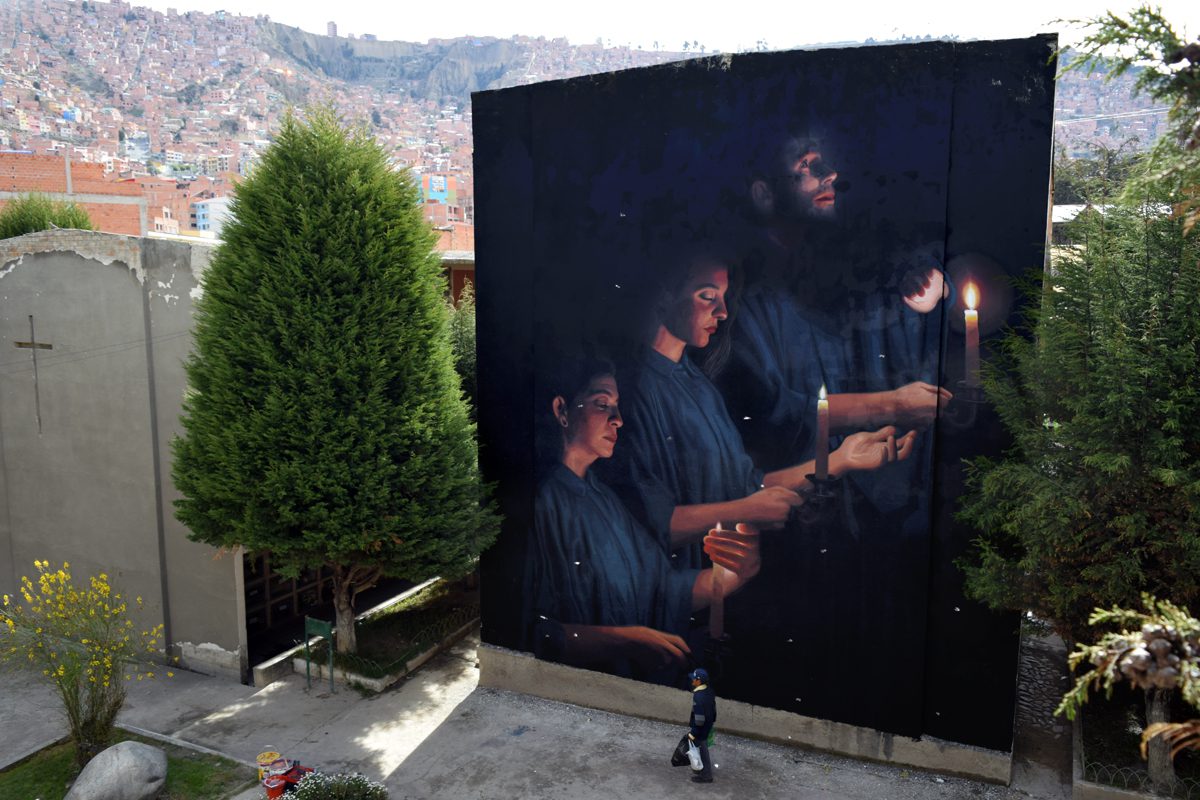 «I’ve been following the work by the South London record label ‘Rhythm Section’ for a couple of years. What distinguishes this label is the selection of the artists and the sound of their albums (from electronic to instrumental music) where you can listen to artists such as Henry Wu, Hidden Spheres, Al Dobson Jr, Dan Kye, Neue Grafik or Chaos in the CBD among others.

I’m also a huge fan of the ‘G-Stone’ record label with artists like Tosca, Peace Orchestra and the legendary Austrians Kruder & Dorfmeister. For those who listen to music on Spotify, look up for my Theic Camilo Nuñez profile and you will find several playlists (Rap, House, Ambient, Funk…) that I have been putting together for a couple of years.

About cinema, last year I was looking for movies where color was an important theme, here I give you a couple of classic cinema titles: ‘Vertigo’ (1958) directed by Hitchcock, ‘Suspiria’ (1977) directed by Darío Argento, ‘Cries and Whispers’ (1972) directed by the Swedish Ingmar Bergman and ‘In the mood for love’ (2000) directed by Wong Kar-Wai.

I am also a big fan of watching conferences, documentaries and programs about classical art on YouTube. I particularly love the conferences of the Prado Museum channel, I recommend the six conferences called ‘Making the impossible visible’ where you will be able to see and hear specialists from classical art talking about works of art but from another point of view, avoiding the conventional talking. Aslo I have to recommend to you an Argentinean radio program (podcast) that you can listen to on Spotify called ‘Demasiado Humano’ conducted by the philosophy professor Dario Sztajnszrajber.

Finally I would like to share the work of my Uruguayan friends: a collective of artists, muralists, graphic designers and photographers called Casa Wang, located in the old city of Montevideo. It’s a workshop / studio with artists such as Noe Cor, Menina Fer, Ceci Ro, Luc Pardo, Rd.Romero, El Reina, Fitz, Lu. Lul and Graphically Speaking. With more than five years in the art scene of the city, Casa Wang carries out drawing jams, workshops of all kinds and auctions among other activities».

Pedro Campiche (Lisbon, 1985), better known as AkaCorleone started moving into the Portuguese underground graffiti scene when he was a teenager. After studying arts and earning a degree in Design and Visual Communication he worked as a graphic designer for several studios until he decided to impulse himself into a solo artistic career. Impulsive drawer and color gimmicky, he is known for his eye-catching compositions that he is able to create on canvas, large scale walls, plexiglass, wood or even sculpting on stone, never losing his twisted sense of humor and his characteristic image overlap of characters and other shapes. 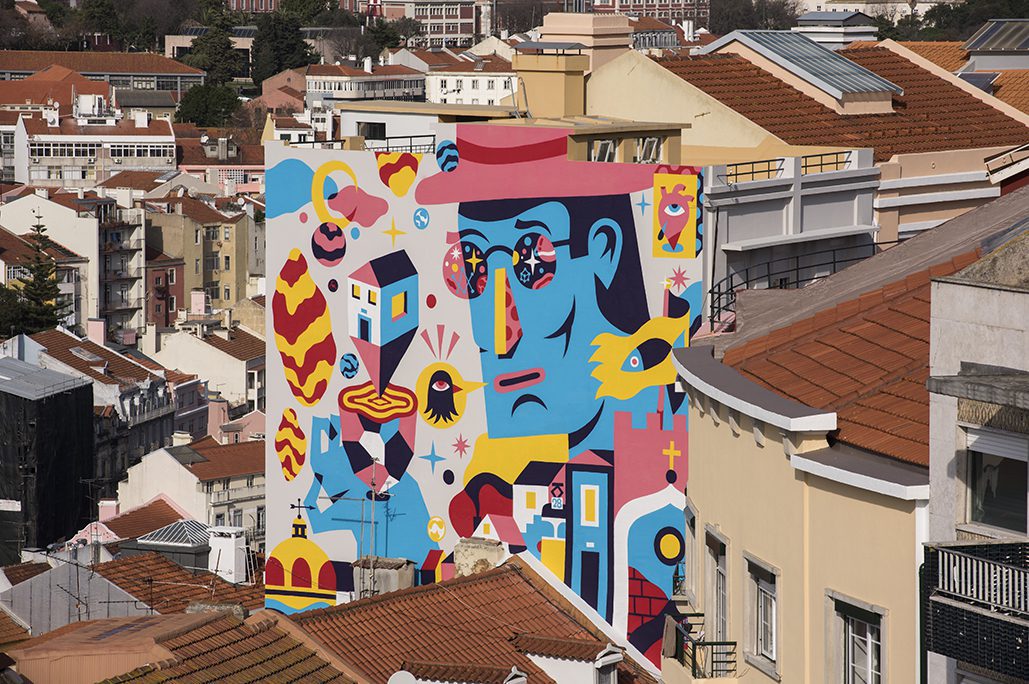 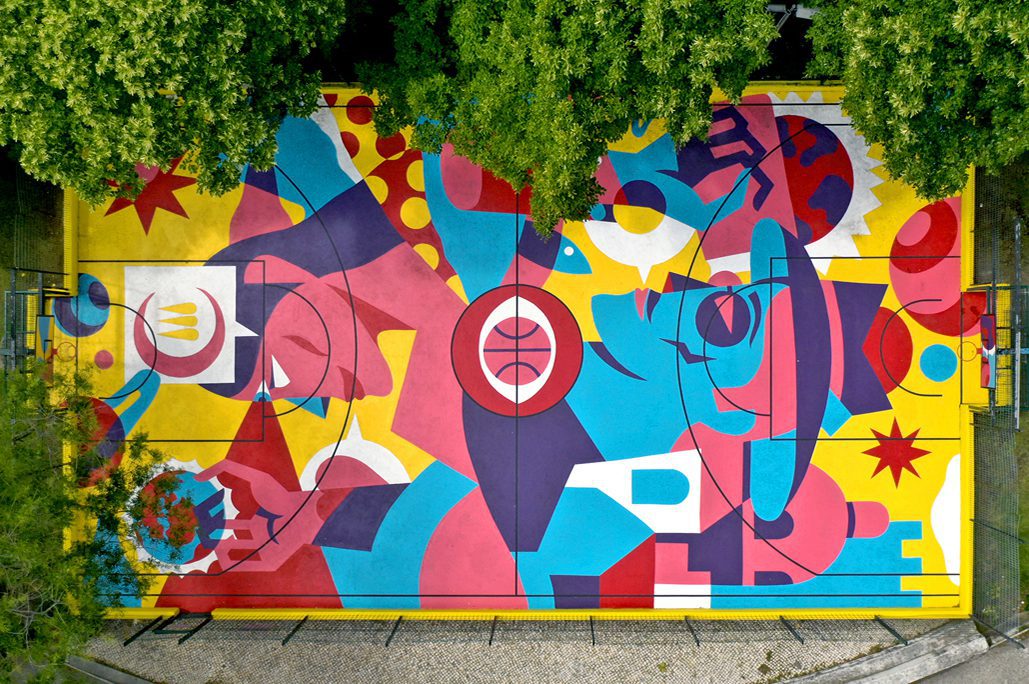 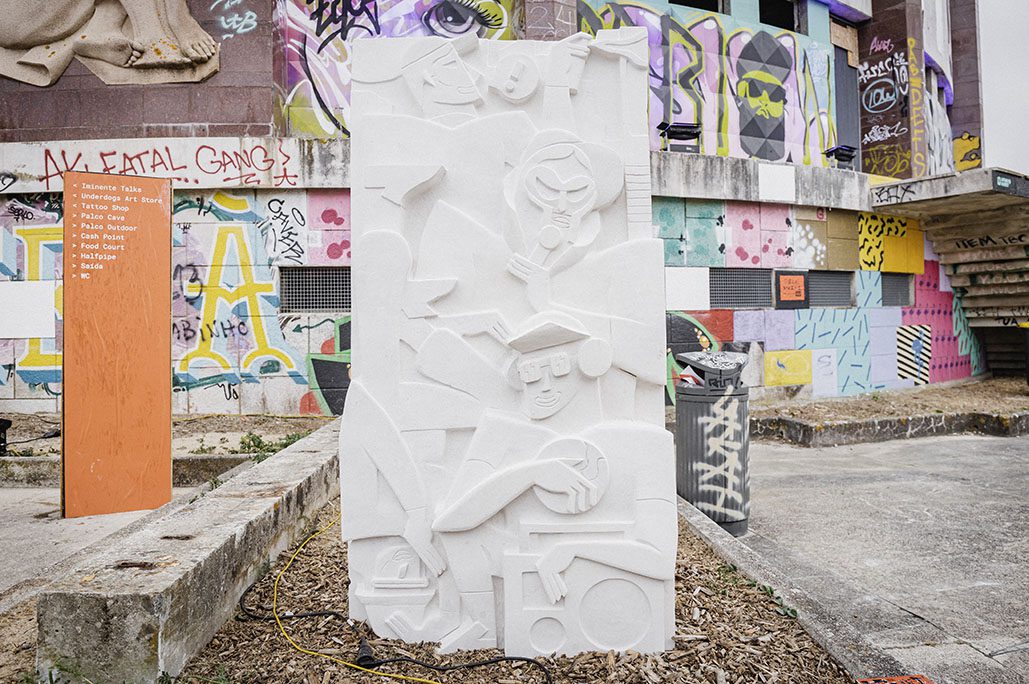 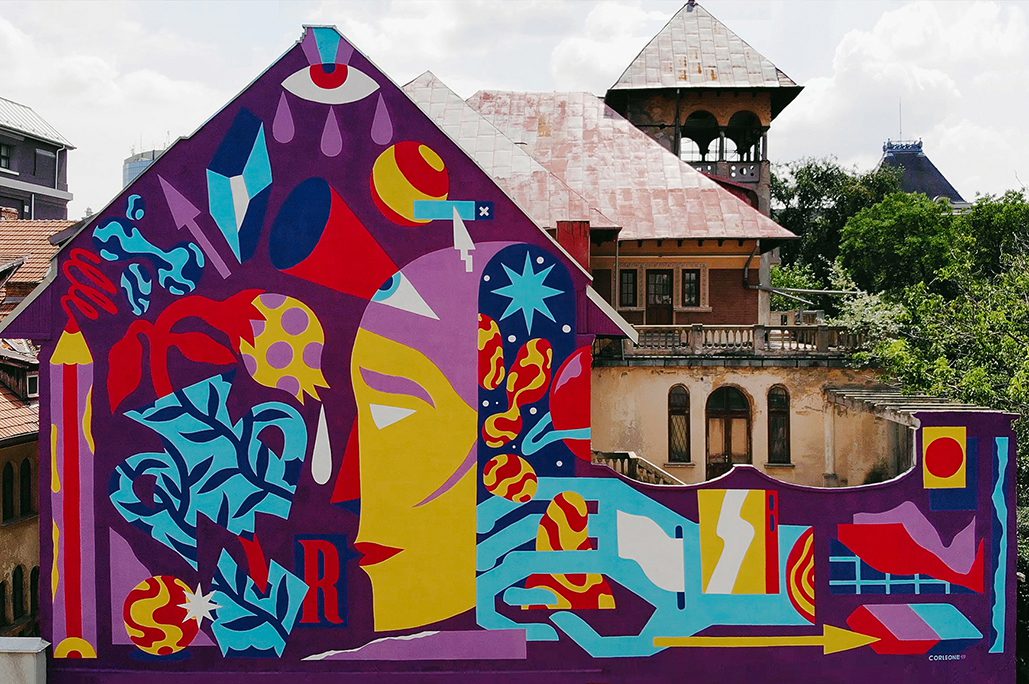 «I really like ‘Wild Wild Country’, a documentary about a guru and a controversial cult. It’s not very recent but is amazing and you can find it on Netflix. I have a slight obsession with cults, just hope I don´t fall into one!

I would also recommend the work of the filmmaker Alejandro Jodorowsky. Specially ‘Jodorowsky´s Dune’ is one of my all-time favorite documentaries, not only because of the epicness of the movie they were planning to do but also because of how this project influenced so many movies and projected so many cool artists to the movie industry.

The last book I’m reading is ‘Keith Haring Journals’. Is really interesting and inspiring to read one of the most influential artists thoughts and ideas.

Also, I just discovered Vivian Greven’s art and I am in love with it. Also I’m always looking forward to Felipe Pantone´s new shows, he pushes boundaries on each exhibition, so his new show in the US shouldn´t be different!

When I paint I really like to listen to audiobooks, it’s a good way to keep my mind focused, I also hear a lot of comedians podcasts.

I love the ‘Jubilee’ channel on YouTube, specially the common ground series. It’s basically a platform that gathers strangers with different opinions and beliefs on pressing issues and promotes dialogue between them… I´m learning a lot».