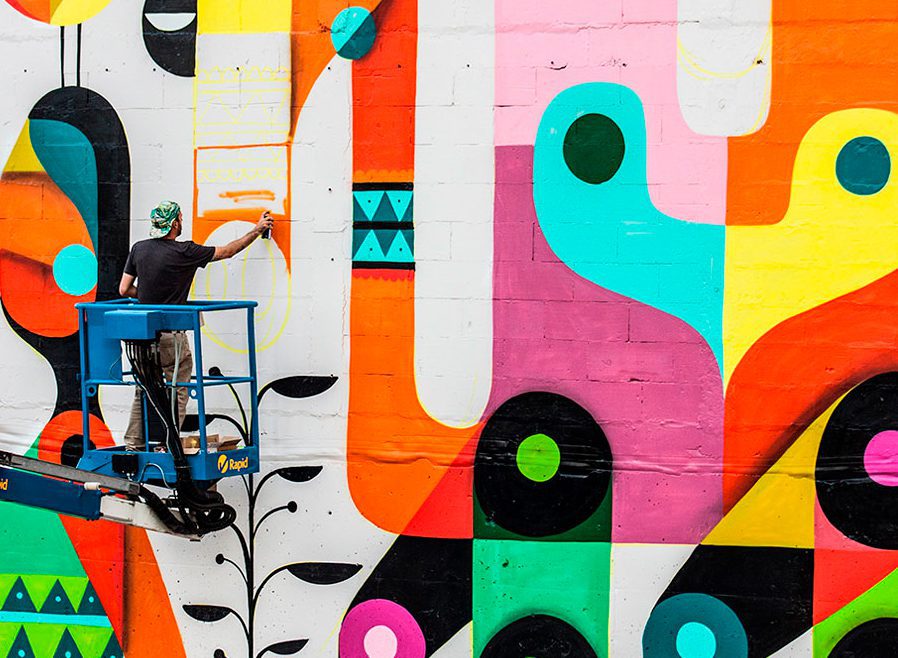 Art with a Mediterranean flavor, cubist inspiration and vitalist compositions where his characters try to find a balance between superimposed elements and full color strokes. Whether on canvas, on a wall, wood, resins or ceramics, the works of the Madrid artist Rubén Sánchez (Madrid, 1979) better known as Zoonchez, are easily recognizable by his energetic and colorful graphic style. 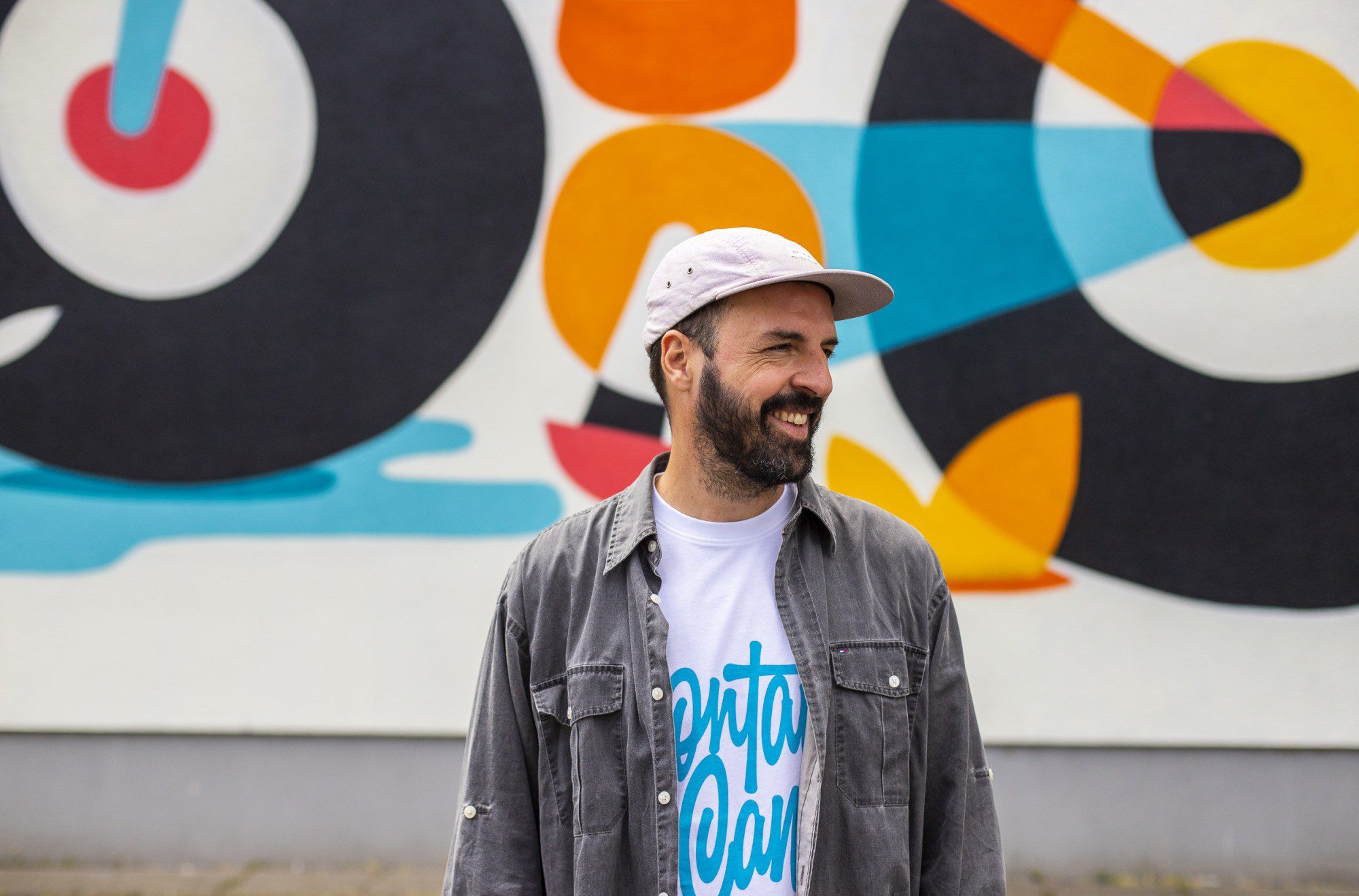 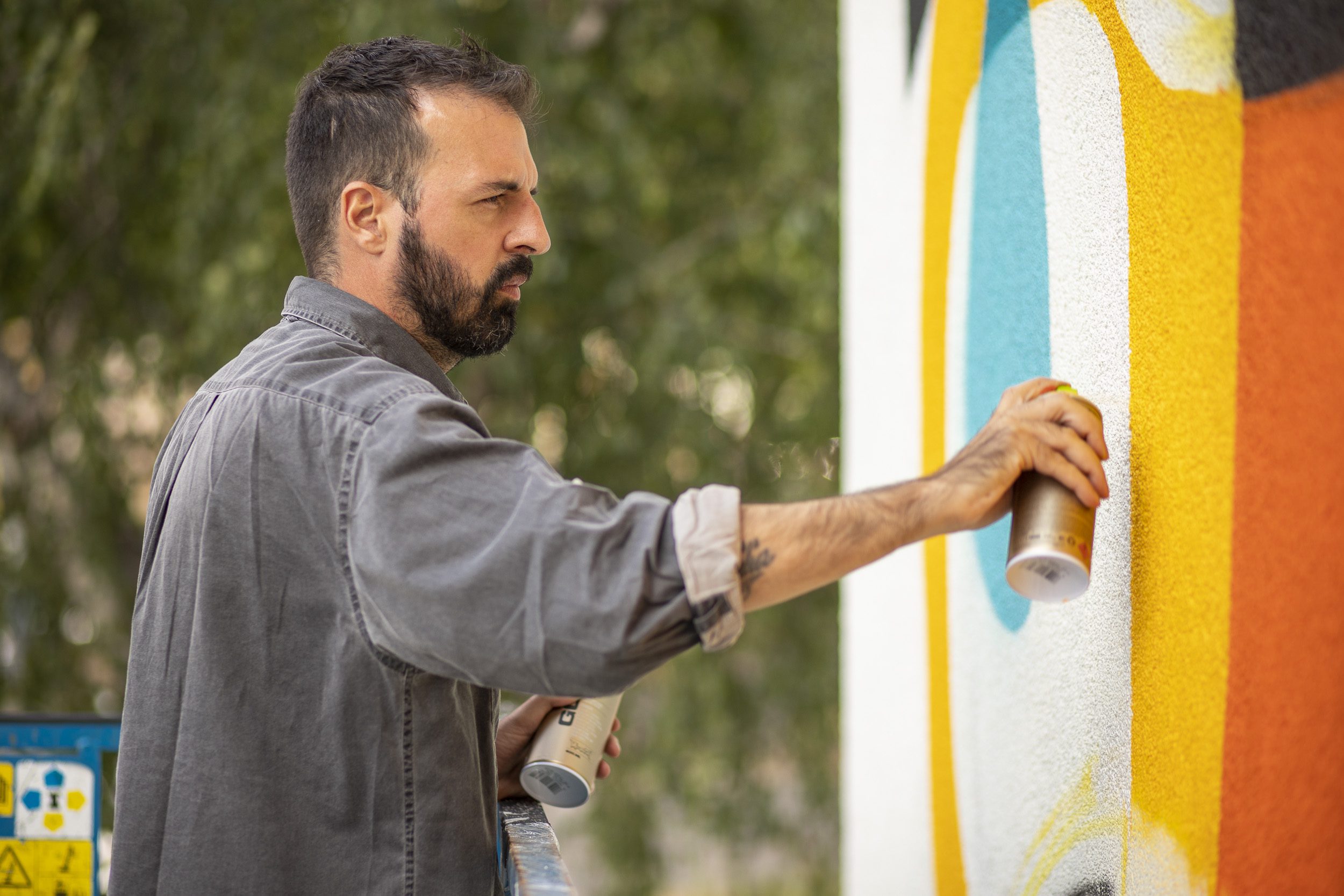 The graffiti scene, and especially the skateboarding scene, were key to his later artistic development which took a turn when in 2000 he moved to Barcelona to forge a career in graphic design. A Barcelona that at that time years was a cultural hotbed where Street Art and skateboarding were going through its golden age. After a short period of time in New York, in 2012 Dubai appeared in Sanchez’s map. He arrived thanks to the artistic residency at the Tashkeel Art Center in Dubai, where he ended up working and living for four years. Here he exploded creatively and it was precisely in the United Arab Emirates where he achieved one of the biggest milestones in his career: becoming the first artist to paint a public art wall in the capital. The first of many to come.

Now, from his studio in Badalona, his adopted city, he continues to work in different formats, exploring volume and producing limited editions of silkscreen prints, ceramics, sculptures and different objects. His lively and colorful works based on everyday life, however, often hide moments of imbalance and uncertainty: «I go through where everything collapse and the castle of my life falls apart. If you know my work this can be perceived in my compositions, but I find it funny that the final result is always a ‘Oh, how beautiful!’», he says.

Energetic and entertaining, we talked and immersed ourselves in Rubén’s artistic world to talk about (dis)balance and beauty. About his beginnings in Barcelona and his creative explosion in Dubai. Come in.

Barcelona was the city where you started your professional career and started working in graphic design after a few years going from here to there in Madrid. How did you get started?

Exactly, in the 2000’s there was a big stampede of the skateboarding scene to Barcelona. The city had exploded culturally. I lived in the Raval and had four Bansky tags around the corner from my house. London Police, Miss Van… They were all there. Artistically, I was very attracted to it but I was a bit disappointed: I came from pure graffiti in Madrid and seeing everyone painting in a legal way kind of lost this vandal touch of it. At that time I didn’t go out to paint anymore, I would go out and skate. With a friend who started to set up a skateboarding brand, I started to work as an art director, I made a living with my lifelong colleagues and with what I liked best. The perfect formula. But as the years went by, it came a time when I got more and more bored with the computer way of life. 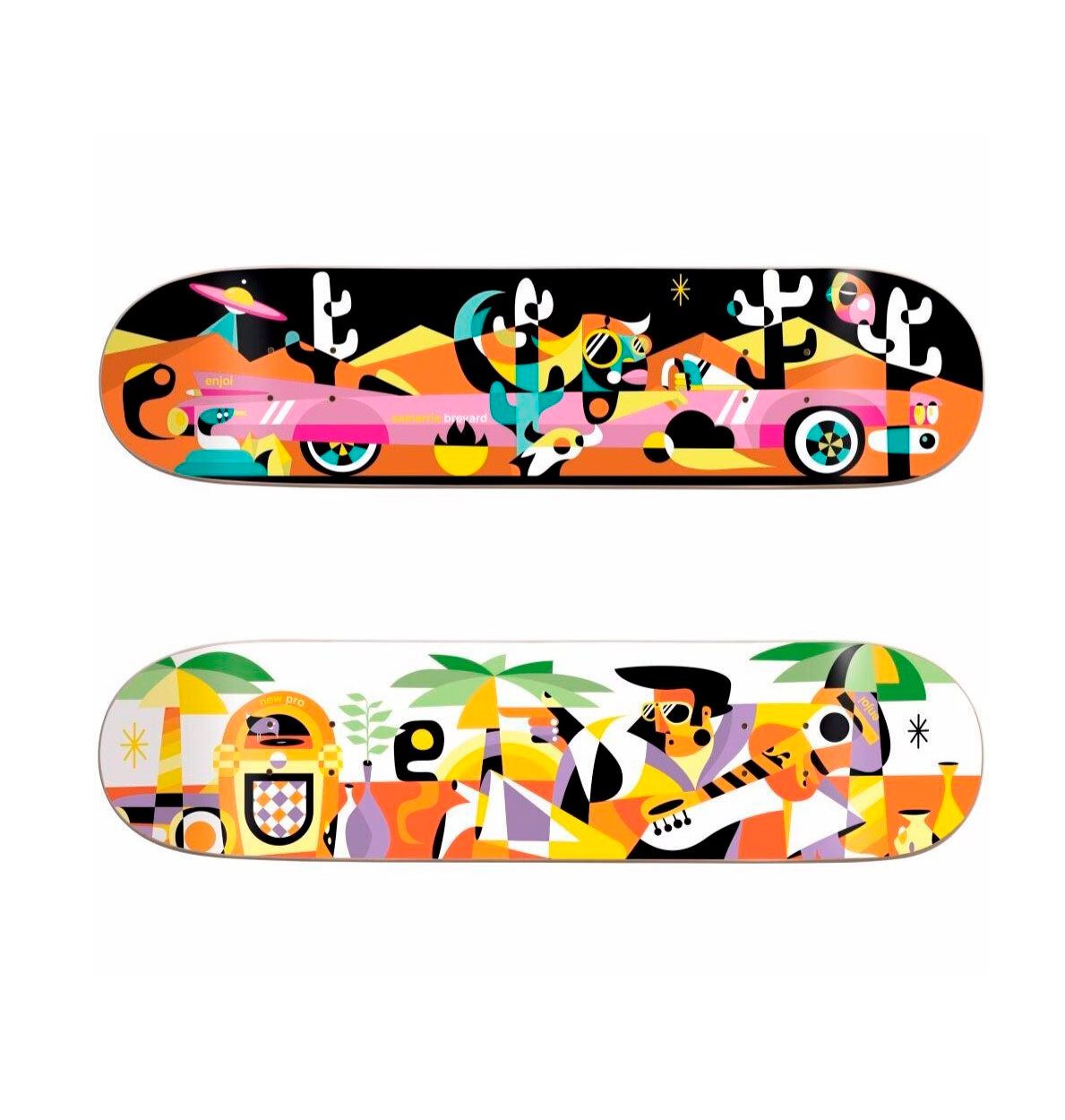 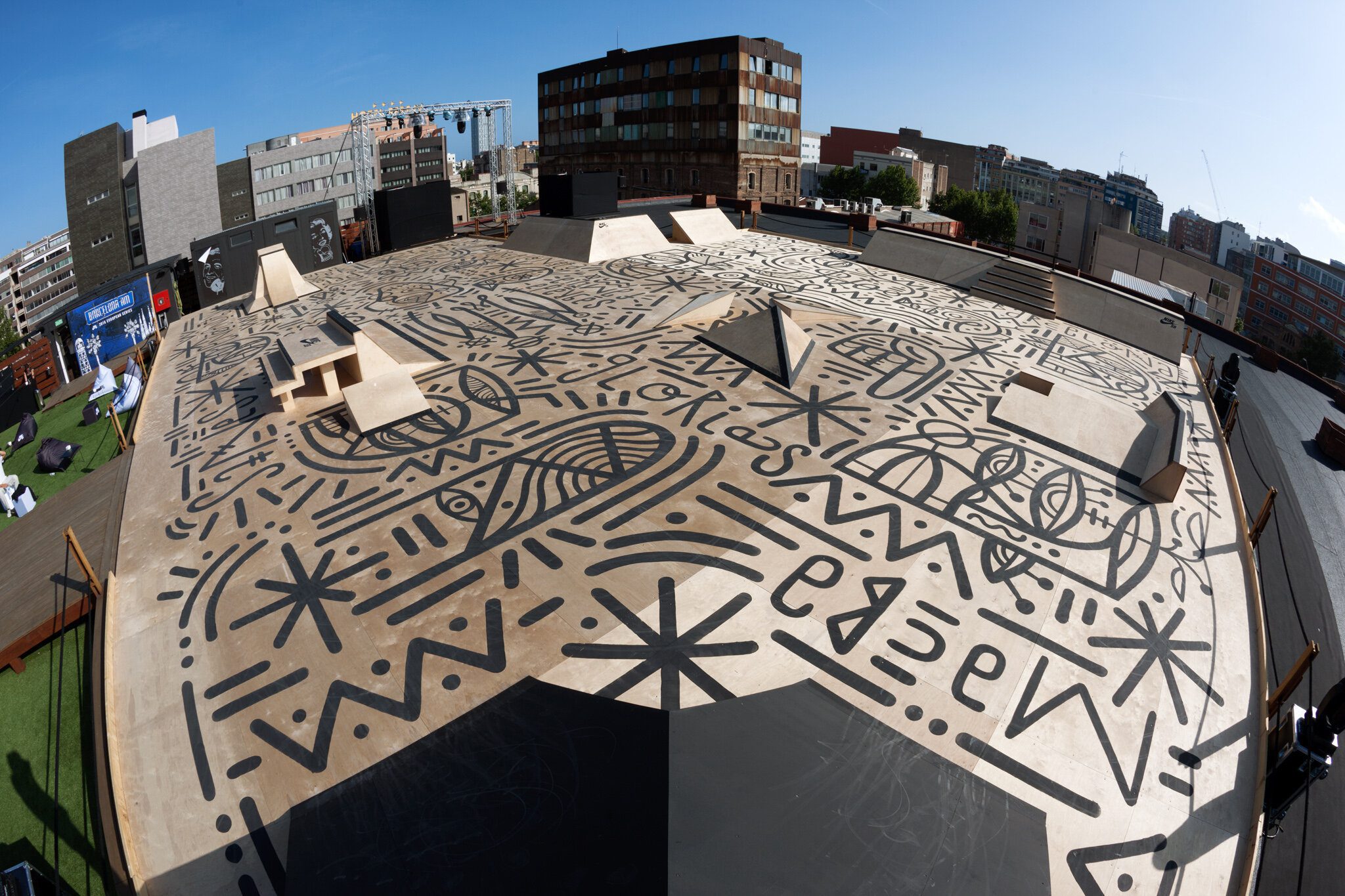 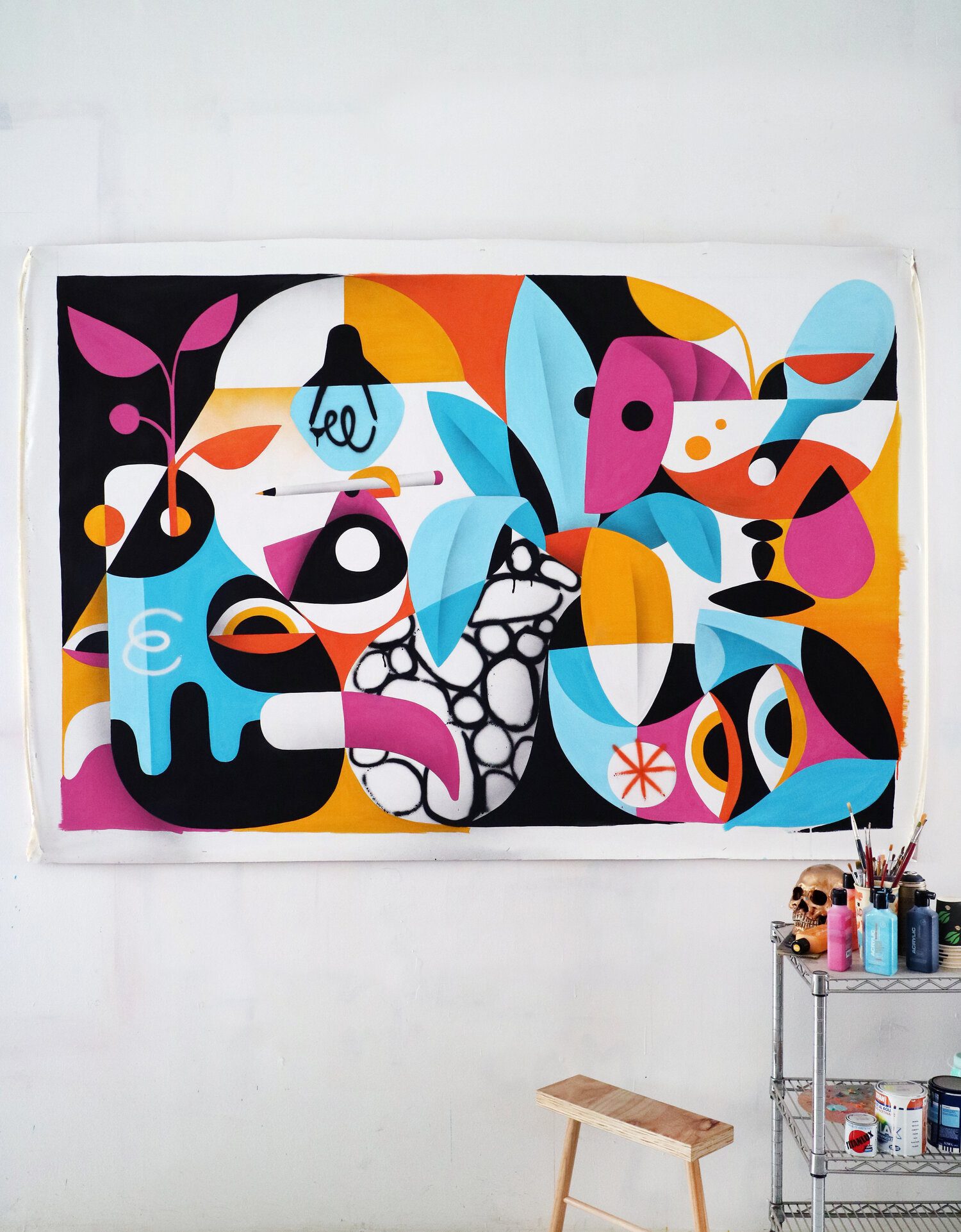 That’s when the opportunity arose for you to go to Dubai. What was that life-changing experience like?

I wanted to go back to my origins, to when I used to fret with broken woods and skates and paint them before entering the world of graphic design. I missed the craftsmanship. In 2012, coinciding with the big crisis we had in Spain, and through an acquaintance who visited me and saw what we were doing here in Spain, Princess Lateefa bint Maktoum, daughter of one of the founders of Dubai, invited me to participate in an artistic residency at the Tashkeel Art Center. At that time I didn’t seem to have a very promising future selling paintings in Spain and what I had to do in Dubai was to get into a studio and explode creatively.

What was the outcome of that experience?

The main richness of this scholarship was the soaking up of the cultures with the other people invited. I was very happy with the results, I was happy to see I was selling the pieces. I experimented with what I found on the street, it was real garbage and it was very funny because people of a throwaway society like Dubai is came and spent a lot of money to buy this ‘garbage’. I just painted and framed it and they bought it. It was super ironic. 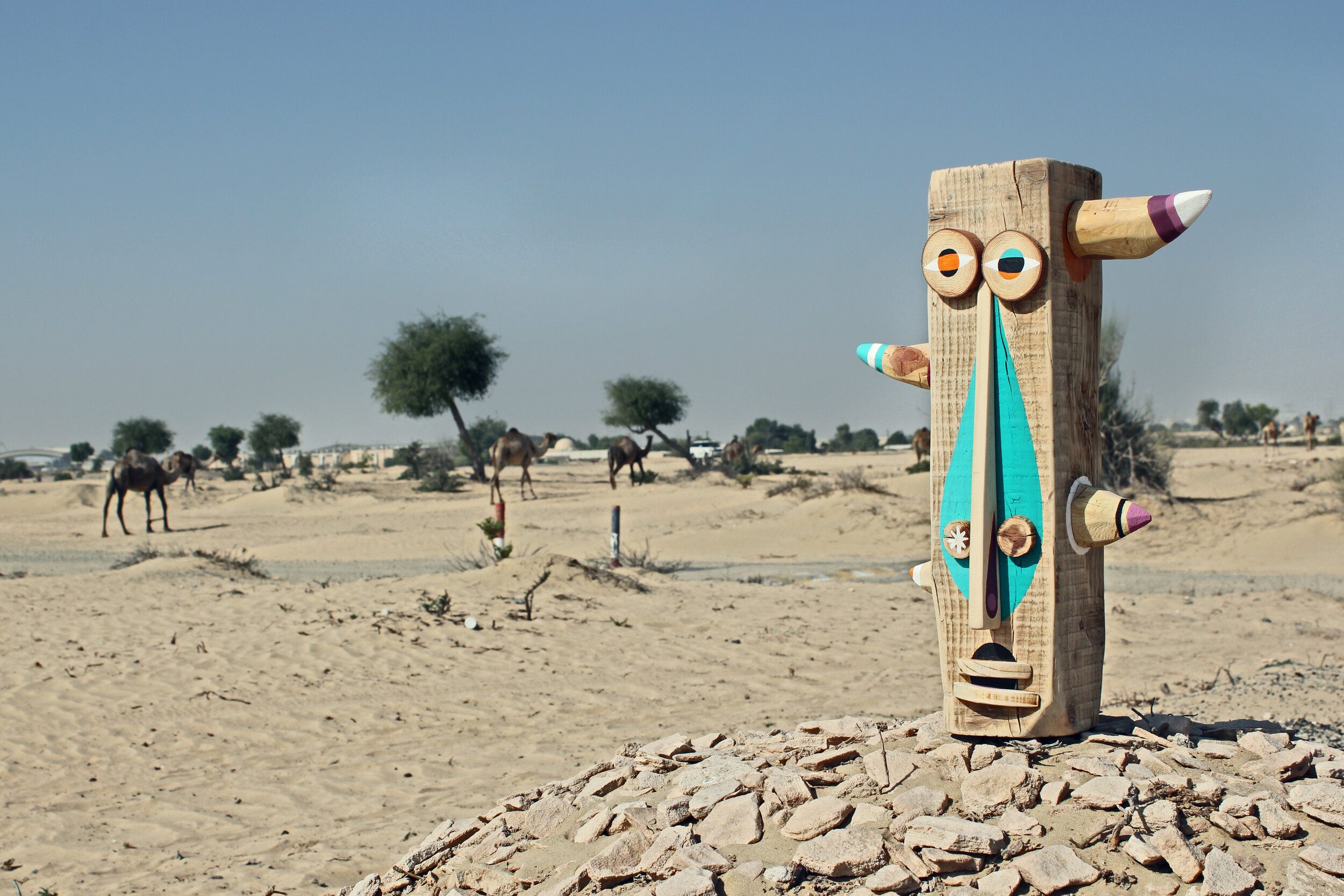 Totem, one of his residency artworks in Dubai 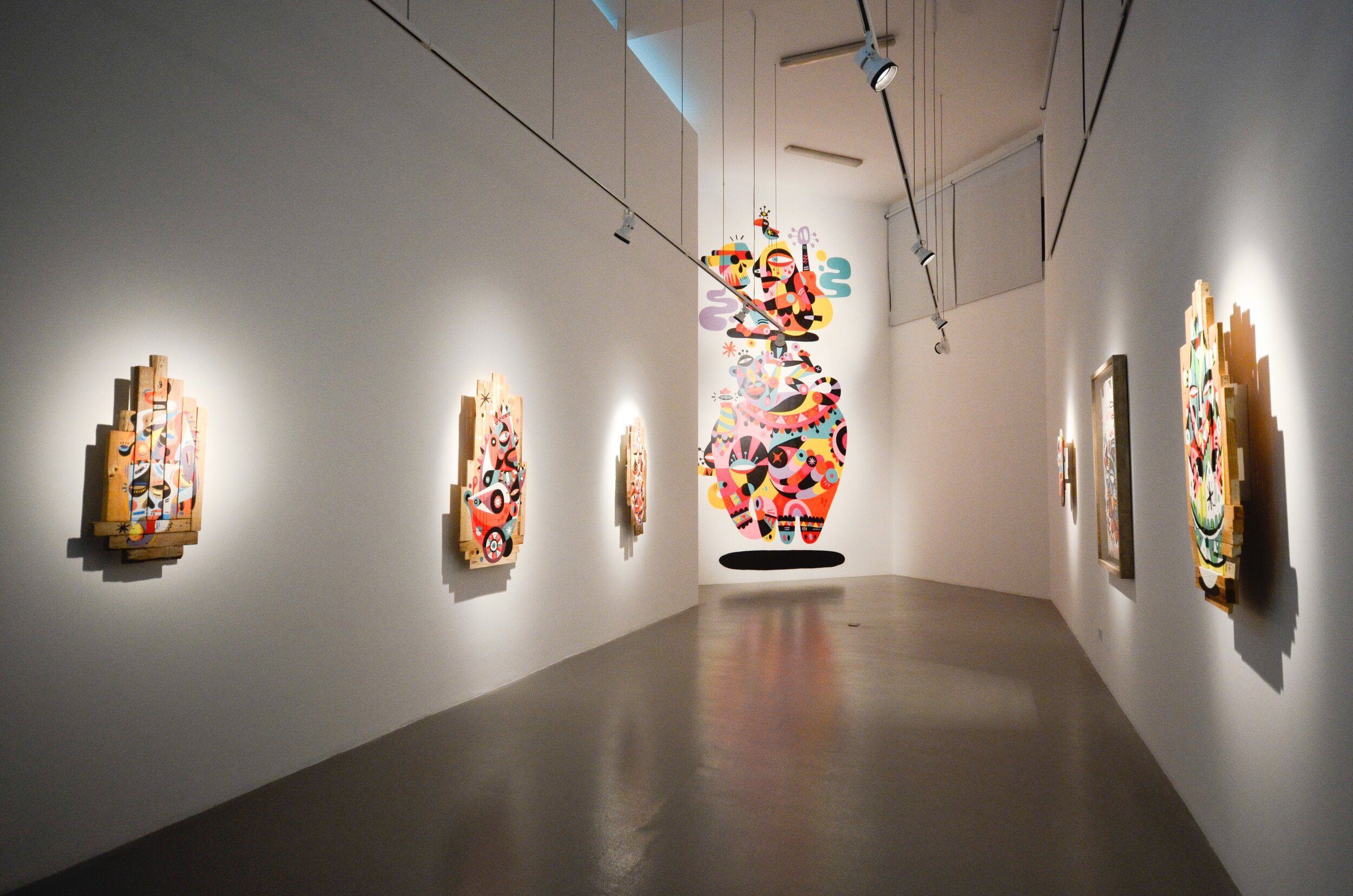 Opening of his exhibition in Dubai

When I came up with the idea of doing a mural I was told it was illegal, everything was considered graffiti and was punished with a jail sentence. There was a lot of work talking to the municipality to get the permission. Ittook almost six months, but I had the support of the princess. Even the owner of the building asked us for money in order to be able to paint. In the United Arab Emirates they have made only a few things before me but always with a commercial background. It was so interesting to me to paint the first purely artistic mural. A public, permanent, non-publicity mural had never been done before. 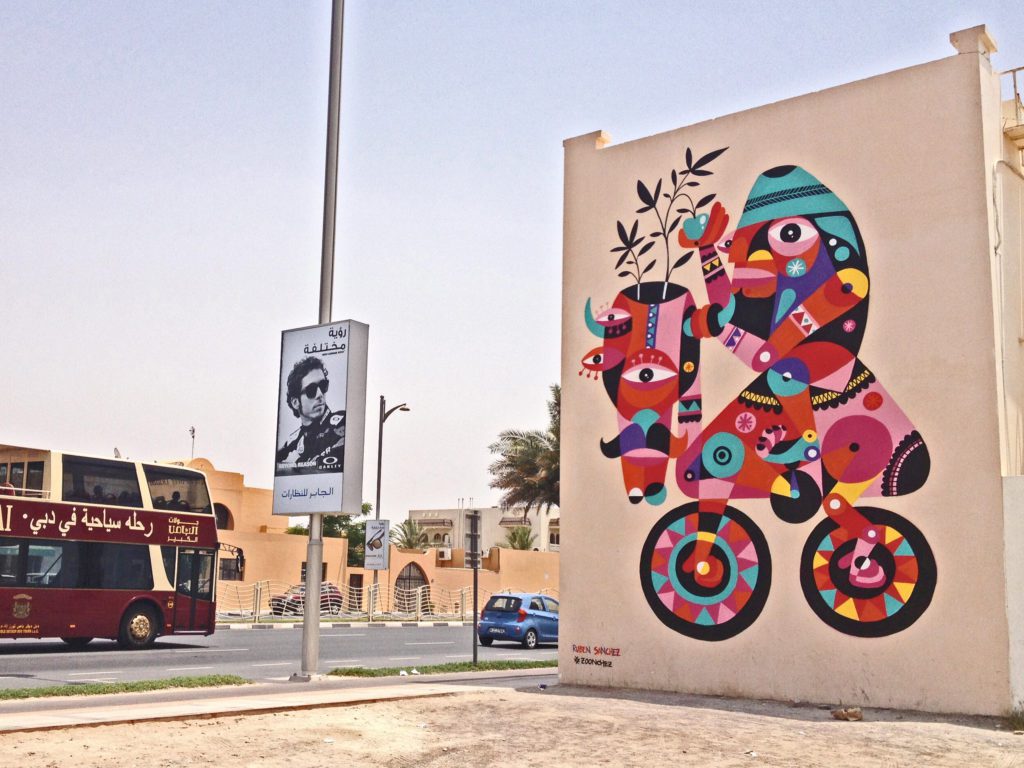 You went to Dubai for a year and stayed for how long?

Well, almost four years! I would have never gone to Dubai on my own, it was very strange for me but everything I had there was up to date. I was freaking out. As a result of that first mural I painted during my residency I had an incredible success and hotels and people from all over the town started to write me to paint pictures or murals.

There was a point where the city was basically yours!

Totally! There was a moment between 2013 and 2014 when there was such a saturation of Ruben in Dubai that I was even embarrassed [laughs]. Suddenly the city had taken on a super Spanish character, very Mediterranean and the cubist shapes and colors created a certain contrast. Everyone would tell me: I saw a wall of yours in a restaurant, in someone’s house, on magazine covers… I had a brutal production, the first year I didn’t stop painting. Canvases, woods, resins… It was trial and error all of the time. 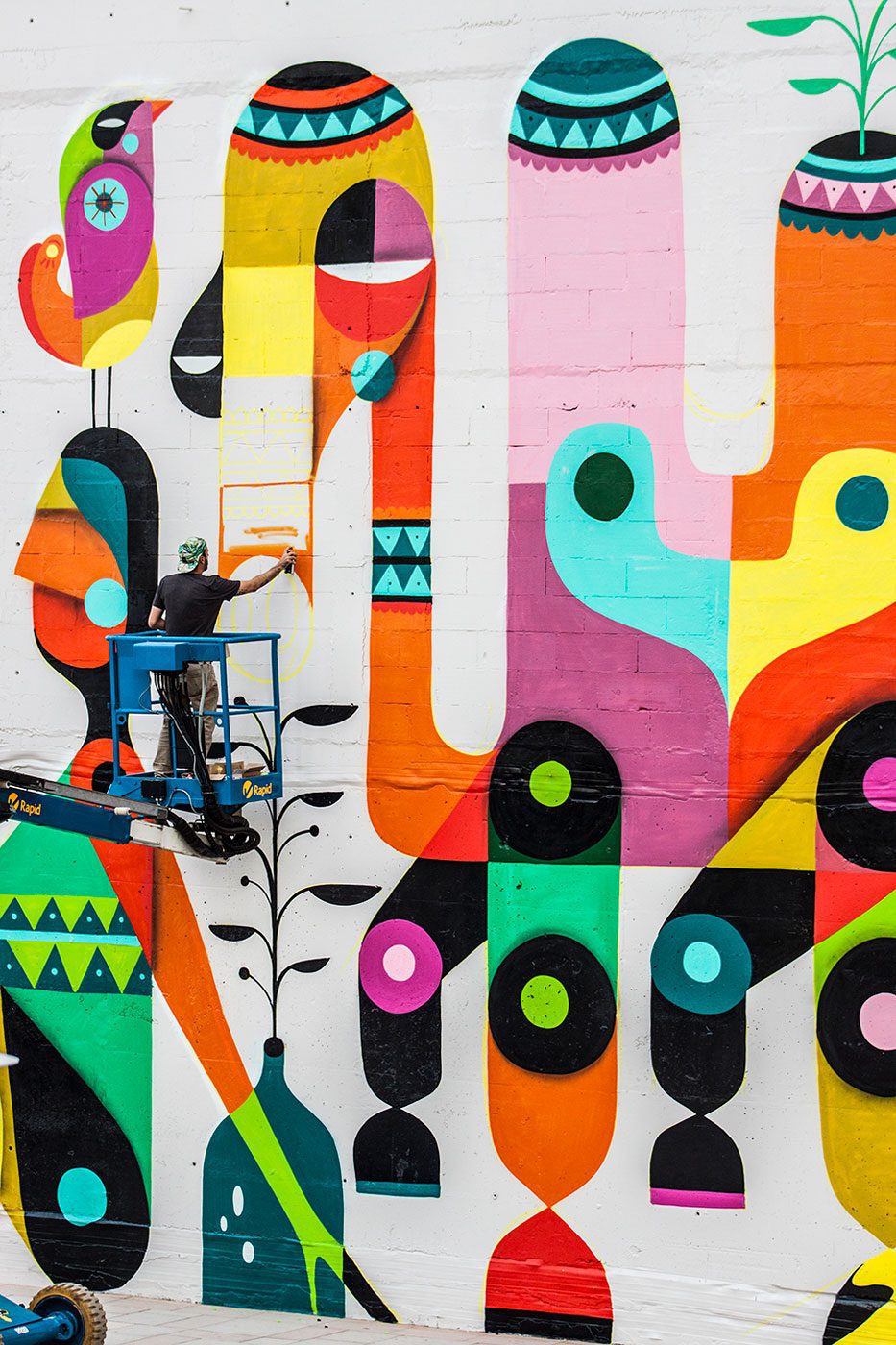 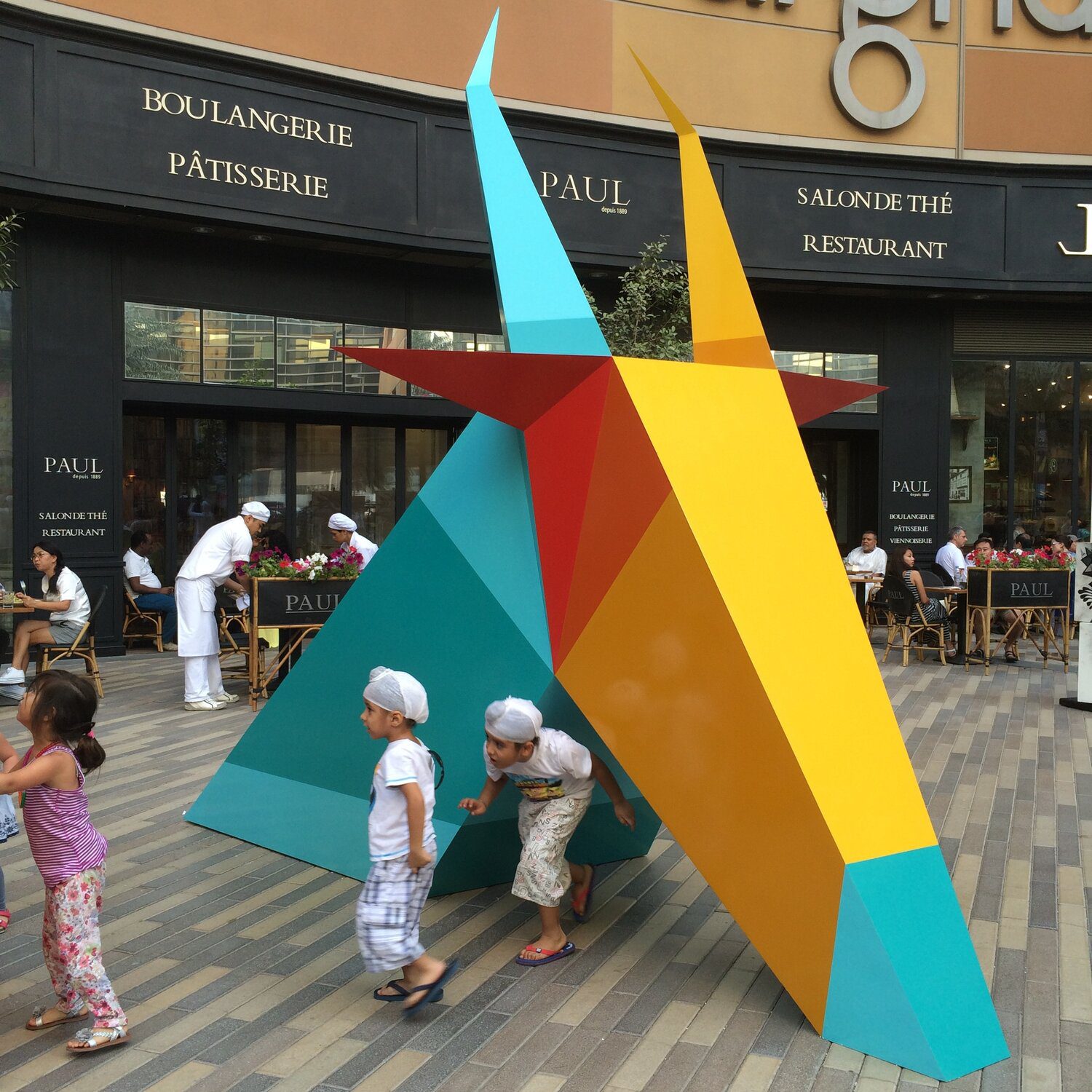 You combined these years in a luxury city as Dubai is with other humanitarian projects working with refugees in border areas. How was that combination?

If I would have stayed in Dubai all the time my head would have exploded. You have to get out of there, and I never got too involved with Dubai’s society. I spent the whole day in the studio painting and when I could I took the car and went to Lebanon or Oman for example, which are amazing countries. I was working with the American organization AptArts. They work with organizations like Unicef or Médecins Sans Frontières and this gave me the balance I needed. Although it’s true that it was a bit of a short-circuit for me to be in a refugee camp for two weeks doing a workshop with children and then get back on the plane to your five-star hotel in Dubai. Still, it was a good emotional balance that I still need today. Just last year I was in the refugee camp in Lesbos and was planning to return this year, although with this situation we will see when is possible. 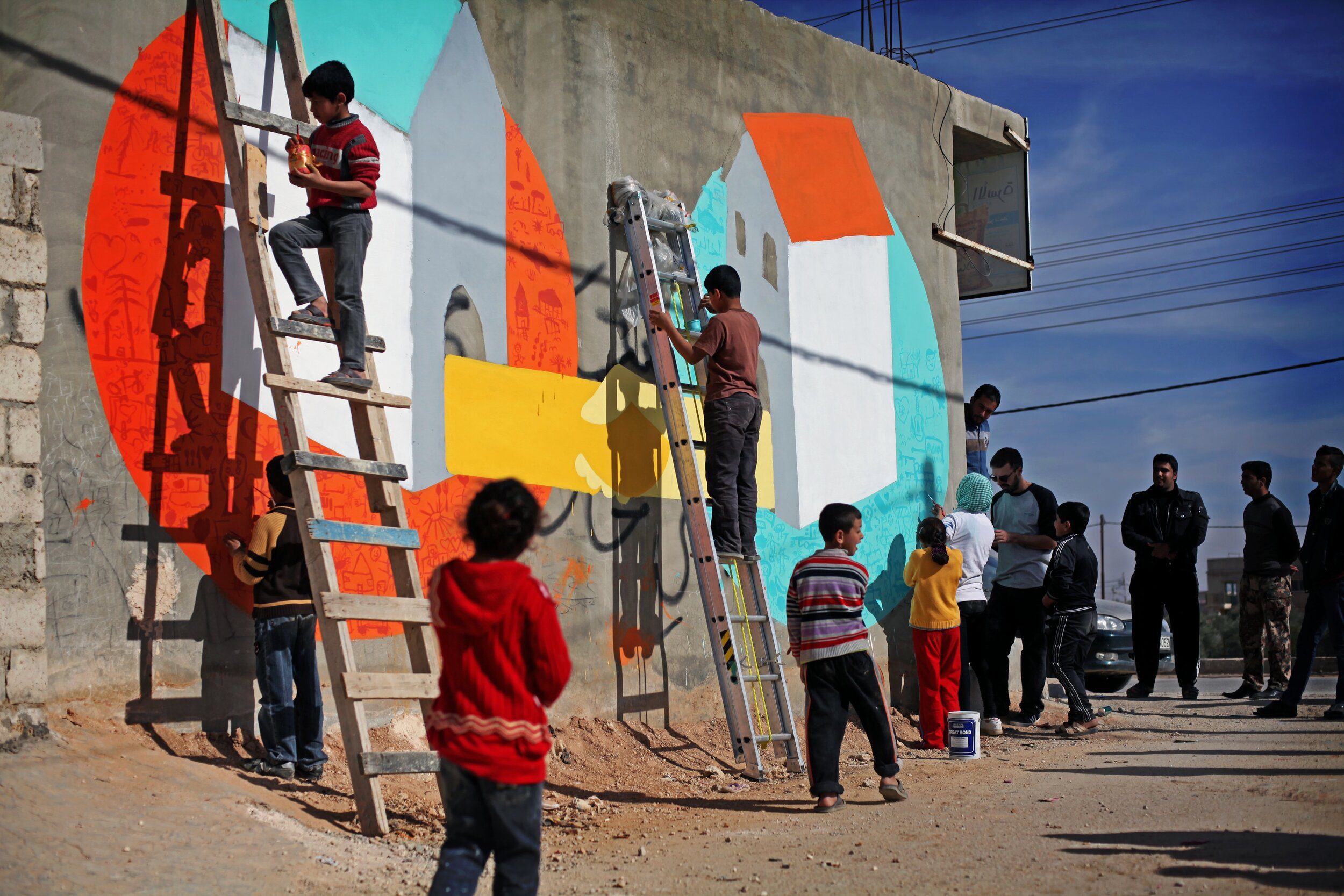 Colaborative wall in the Syrian border 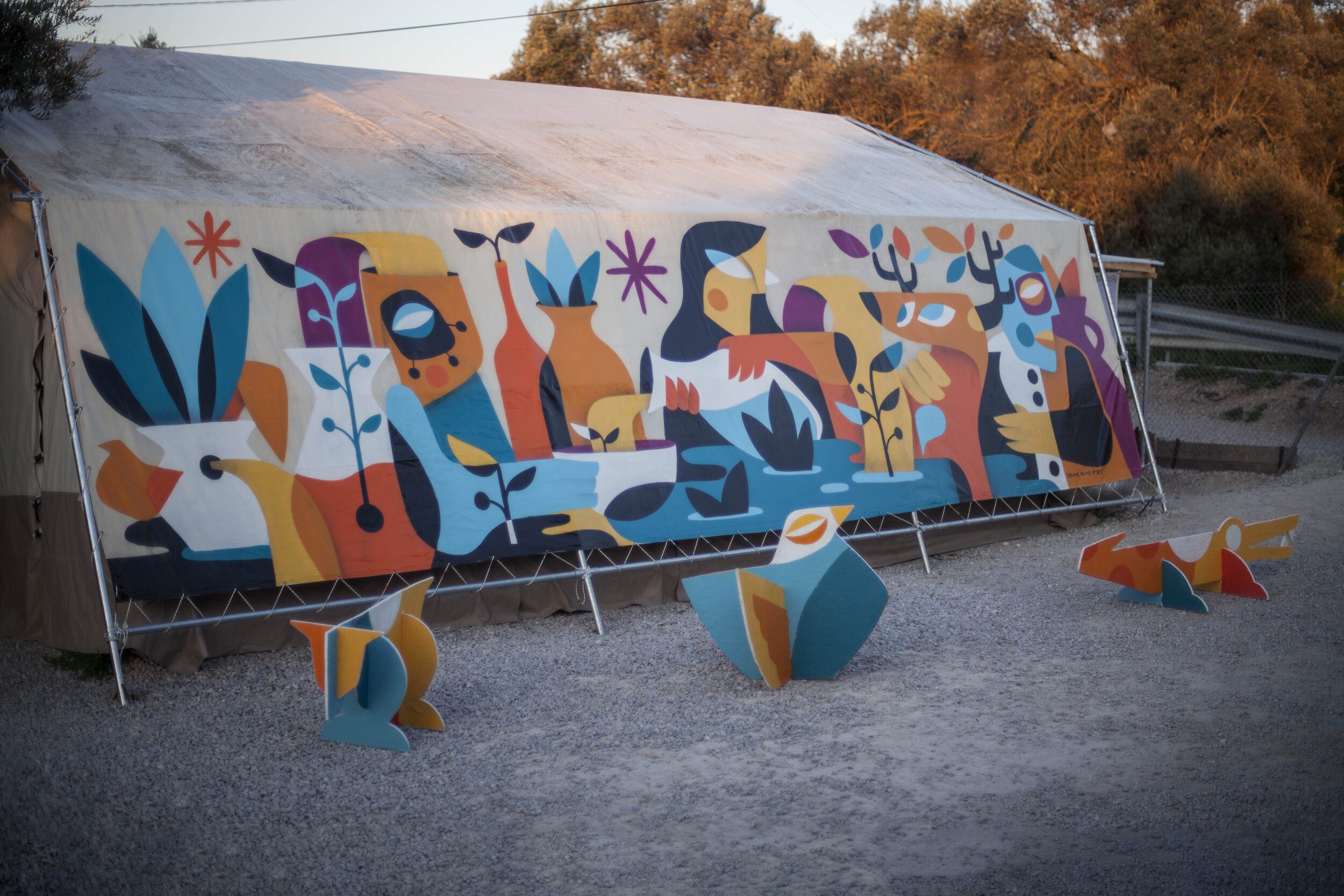 ‘The Lost Art of Caring’ in Lesbos refugee camp 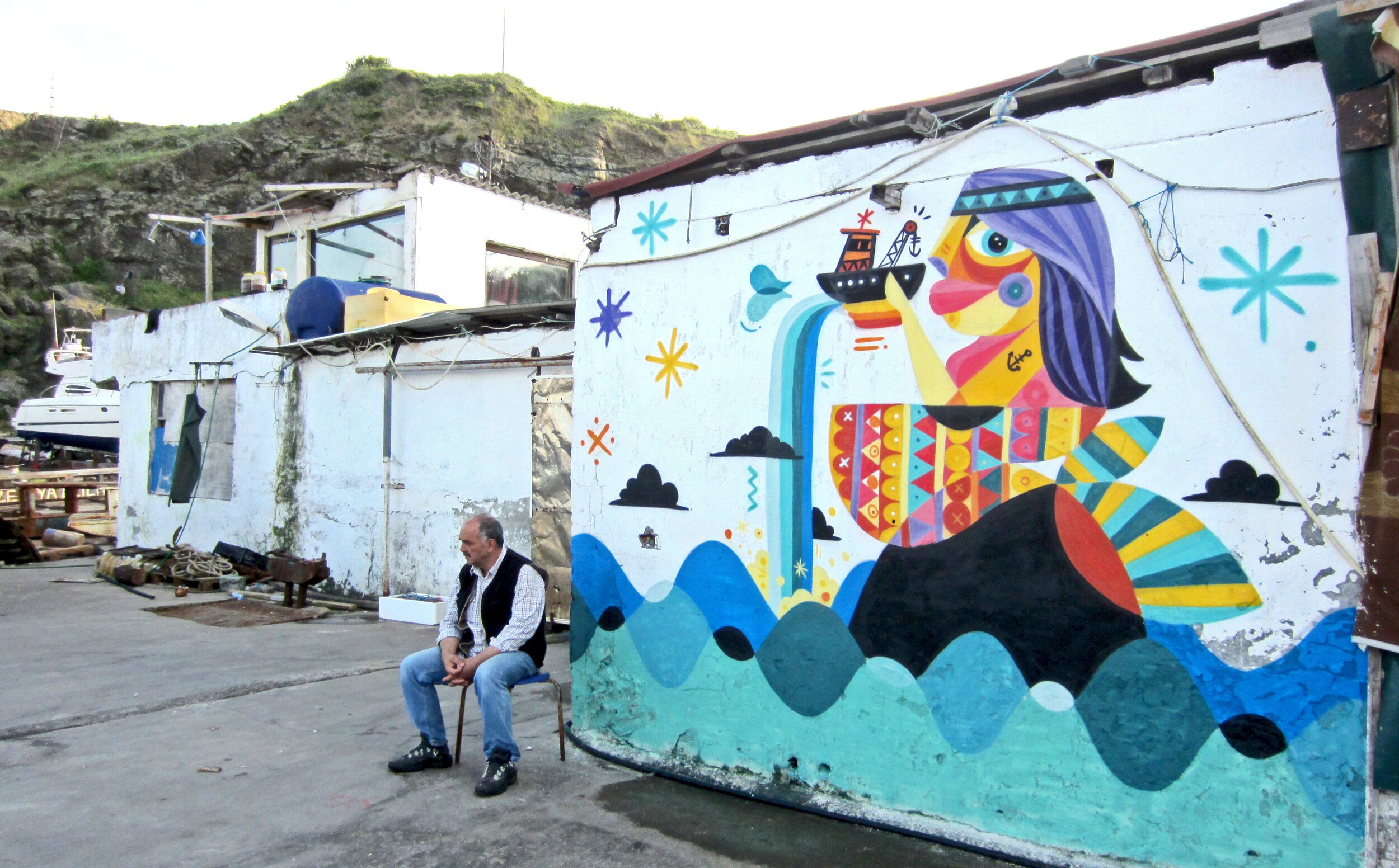 And what point do you see yourself technically?

I’m always looking for new challenges and a few years ago I entered the world of volumes, playing with resins and molds I’ve managed to do some interesting things. But I wanted to go back to the origin of volume and work with ceramics. I started making limited editions of ceramics, little figures… I like the idea of limited editions, I see it as the heritage of graphic design. 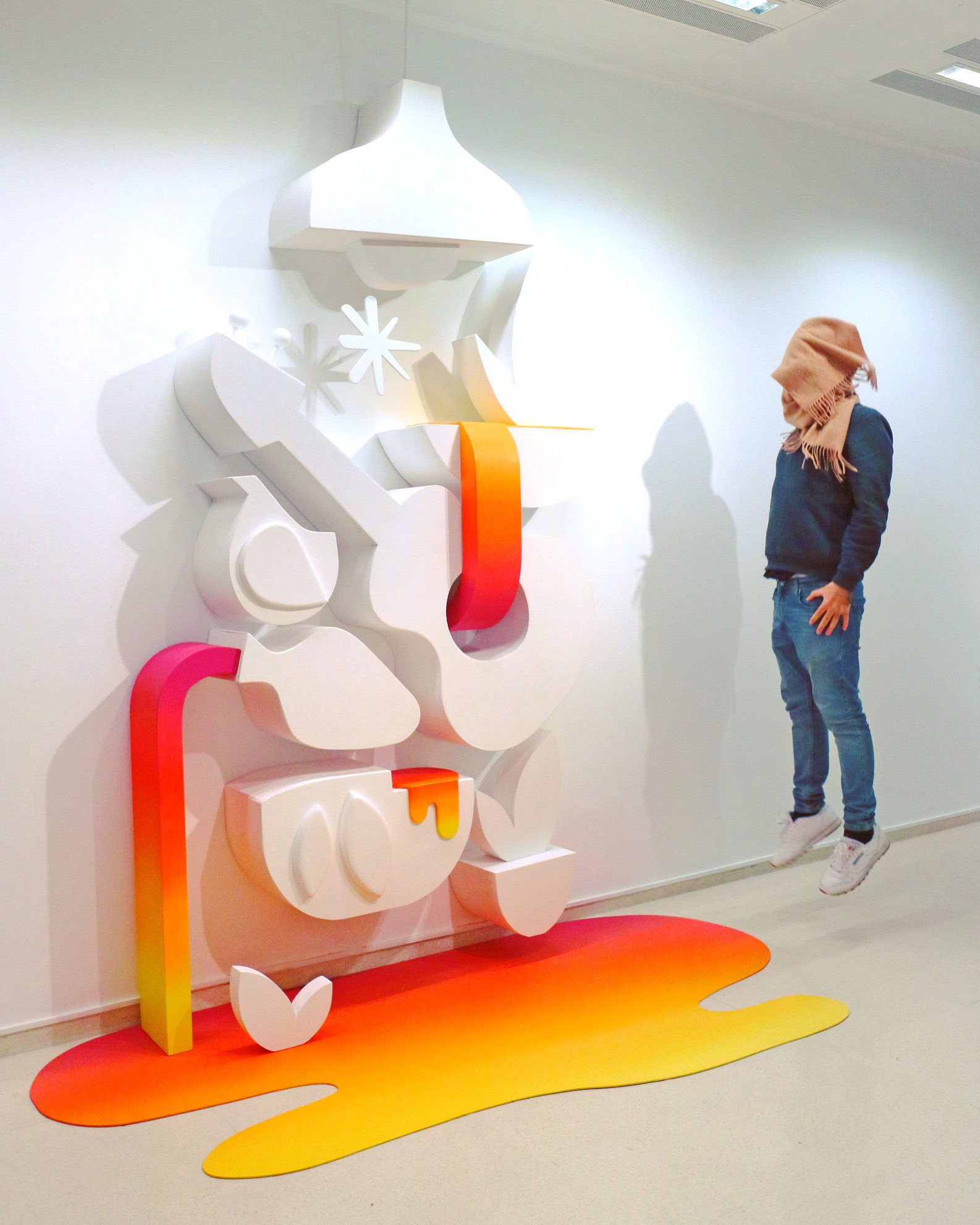 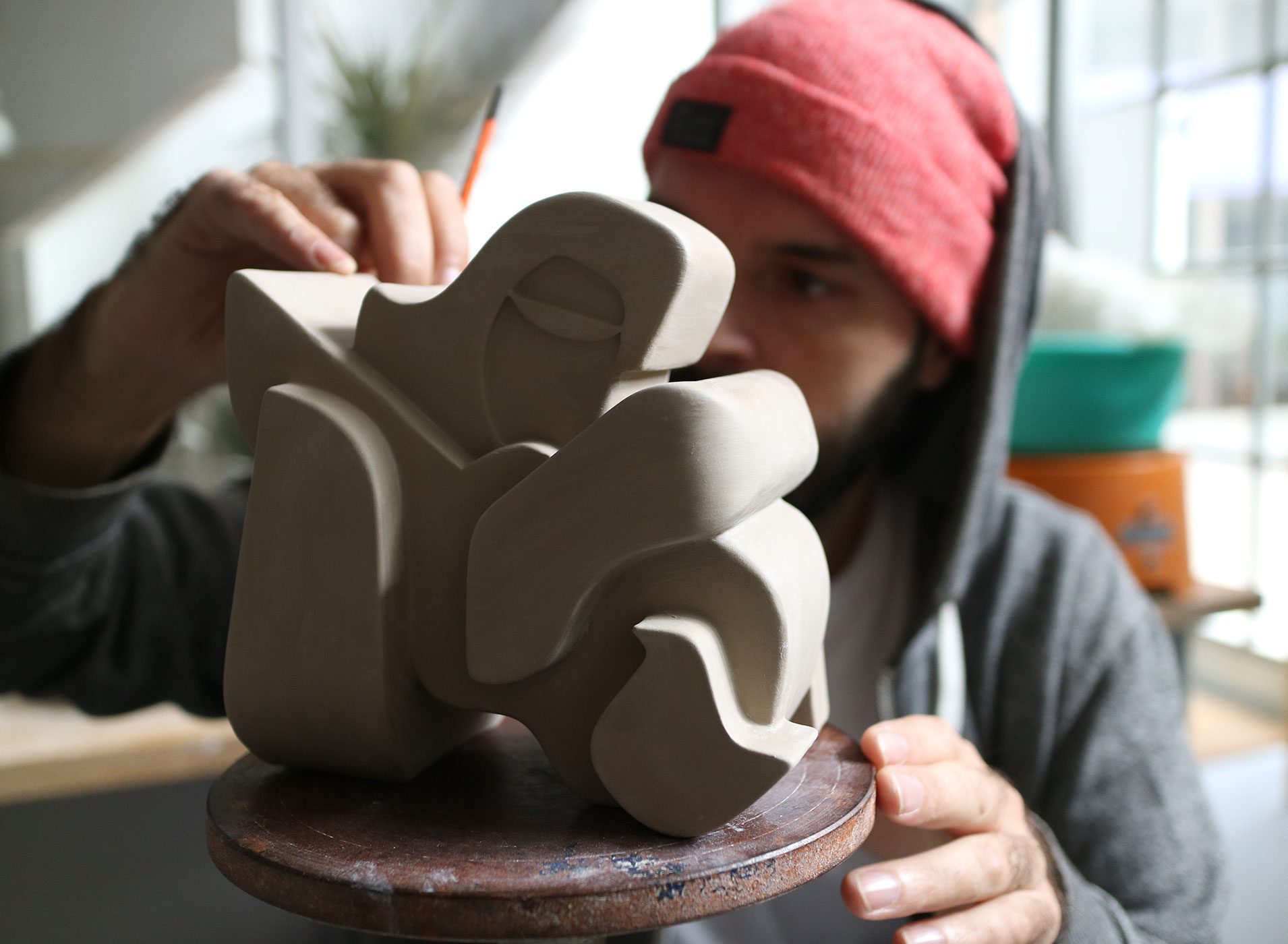 And conceptually? Has this last period affected you?

Now, as many artists I have done a confinement series. I didn’t have the brains to explore many more options than the concept of people oppressed by space, which I had been actually doing for a while. I really like having the characters oppressed by the format of the canvas itself. If you look at my paintings you see the characters trying to get out, just like escapists trapped in a water tank. Even more now. At first sight my works may seem quite banal, very colorful… Nevertheless I use quite a few vanitas like snakes, skulls… Which give my pieces a more sordid point. I like this contrast of ‘happy’ painting hiding behind it a lot of frustration, a lot of misery…

Do you work based on feelings?

I work a lot on the subject of balances and imbalances, our everyday life more than trying other galaxies, which is something that I have also done, but I prefer to stick to the here and now. I try to get magic out of these everyday moments. I also suffer a lot out of anxiety, I think it turns something very ordinary into something extraordinary. There are times when I hate people, things happen to me that make me unbalanced, in personal moments when everything has collapsed and this can be seen in my compositions. It’s funny that the final result still remains a ‘Oh, how nice!’. 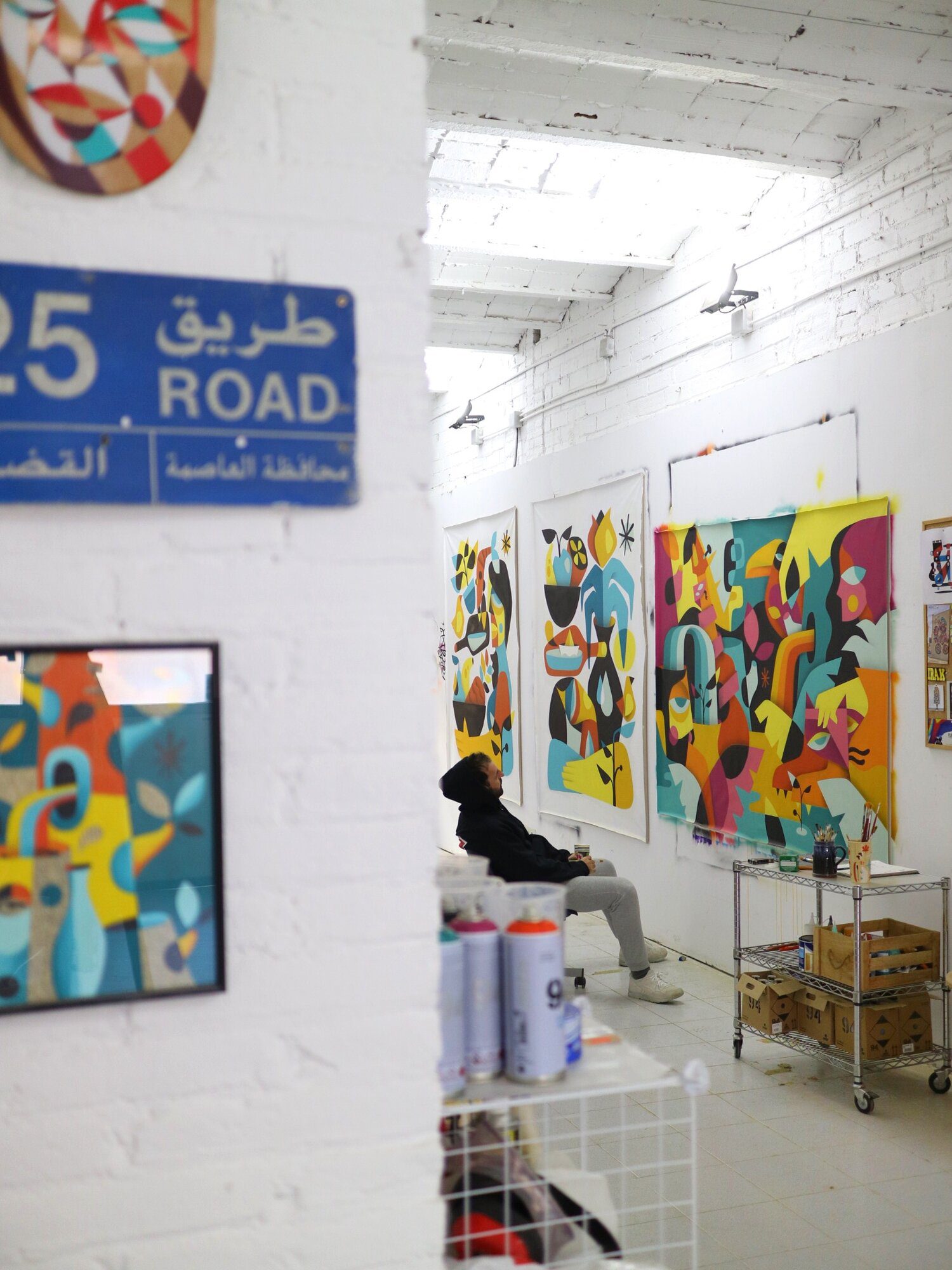 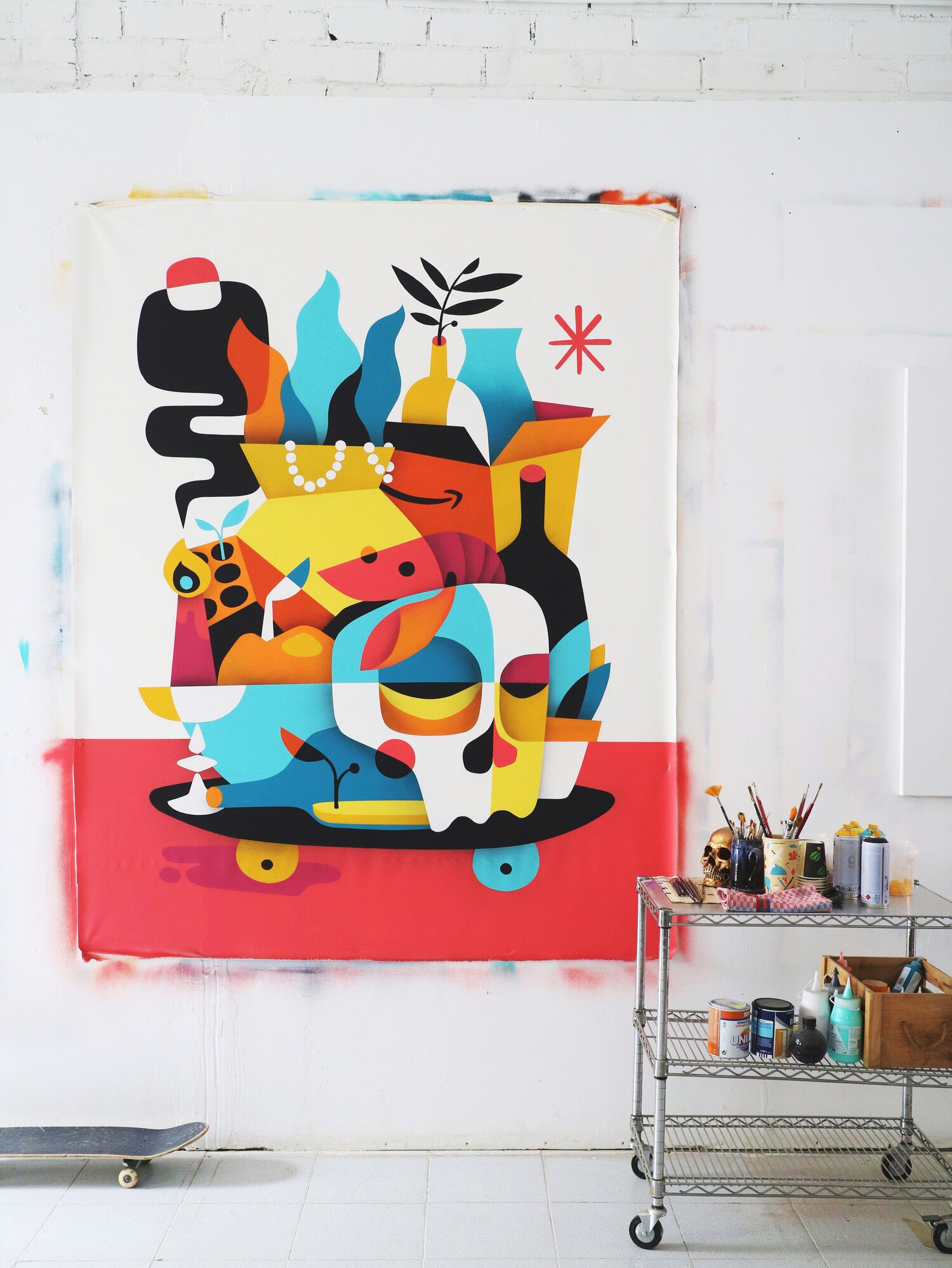 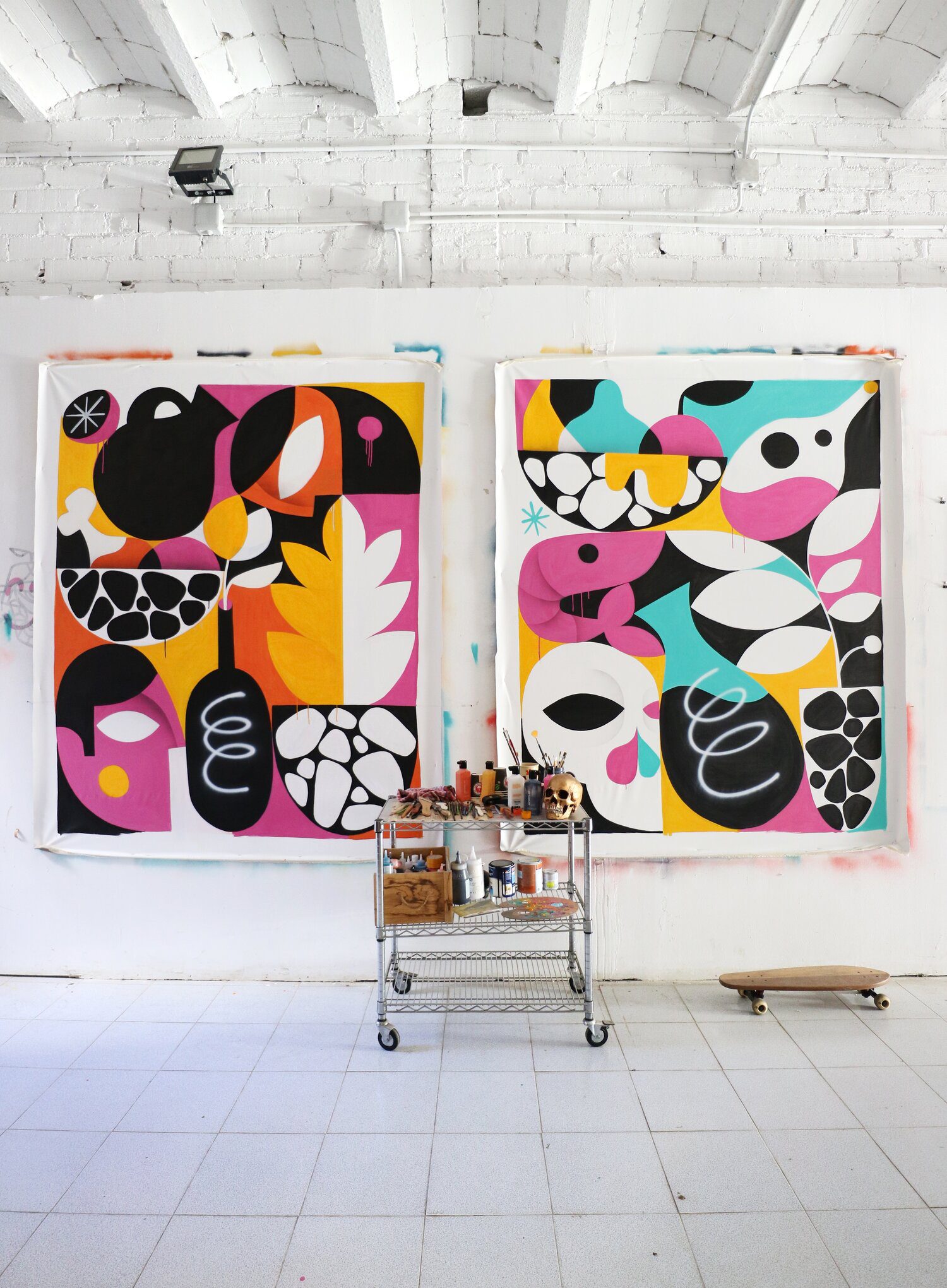 What has influenced your work over the years?

I have artists that I venerate and that I like very much, above all because of their versatility, I like people that don’t just focus on painting, to see how they manage to transfer their style into different media. Le Corbusier, Stig Lindberg… I’ve also become quite imbued with cubism like De Braque, Juan Gris, Picasso. There’s a lot of Mediterranean character in my work. Look what’s around me here. Doesn’t it bring you organically to the colors and palettes I’m using? Almost to the concepts as well. You’re in the studio, you see my guitar, you go outside, you see the turquoise sea, the green pines, you see how those colors mix, how the shadow hits the palm tree and creates a brutal orange in the afternoon… These are my influences.

And what is to come next? You recently launched a campaign at Kickstarter to publish your first book!

It is a project that many friends and collectors have been insisting on for a long time, especially people who know my notebooks. I made a selection of the most artistic, chaotic or visually attractive pages, including both text and sketches. The publisher I work with has a close relationship with Kickstarter and through them the proposal to launch the campaign came out. I was embarrassed to do it because of the fact that I was asking people, asking for donations… I had a horrible time in the beginning but in the end, in less than a day, the project was funded. I was going crazy! We’re making the book right now and it’s probably going to come out this August. Also I have a couple of collective shows in France and in the US and solo in France to come! 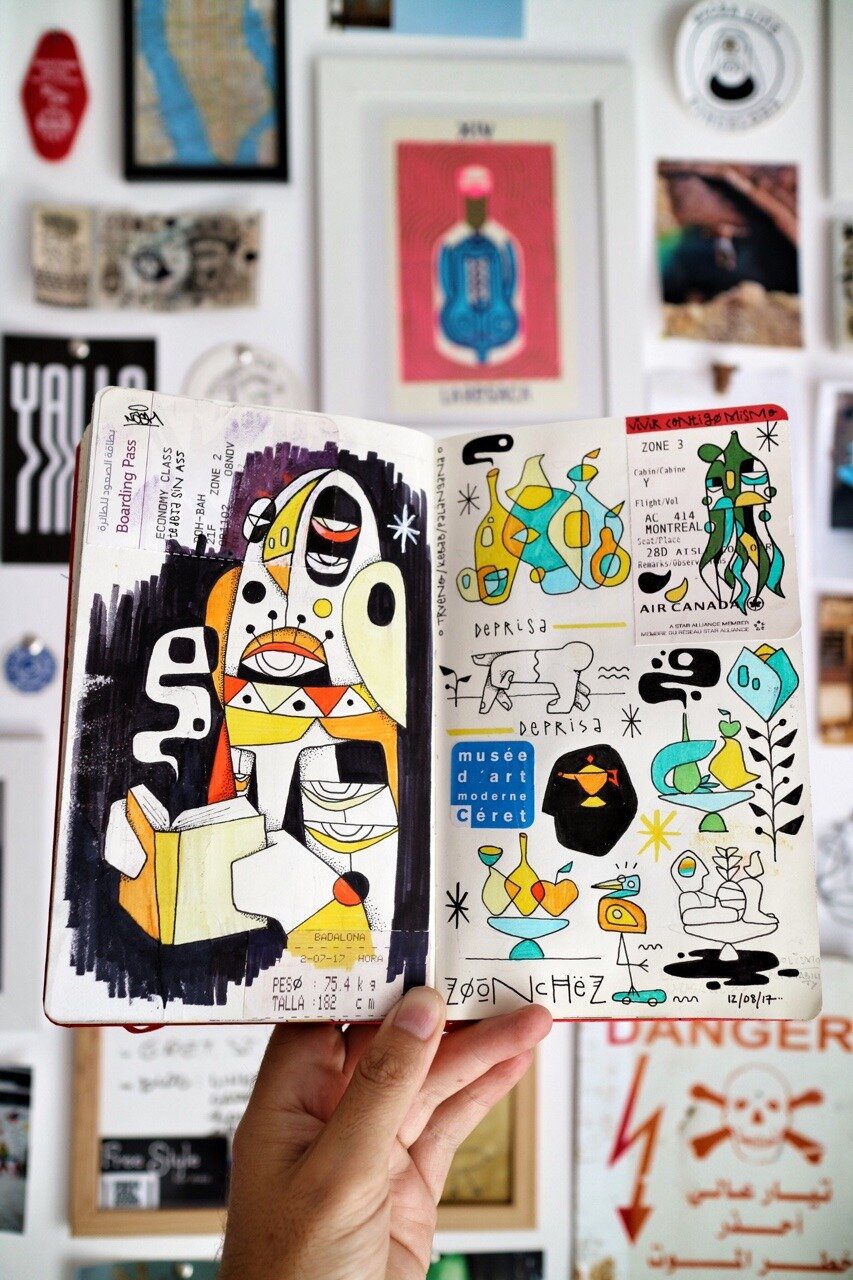 Some of his notebook pages 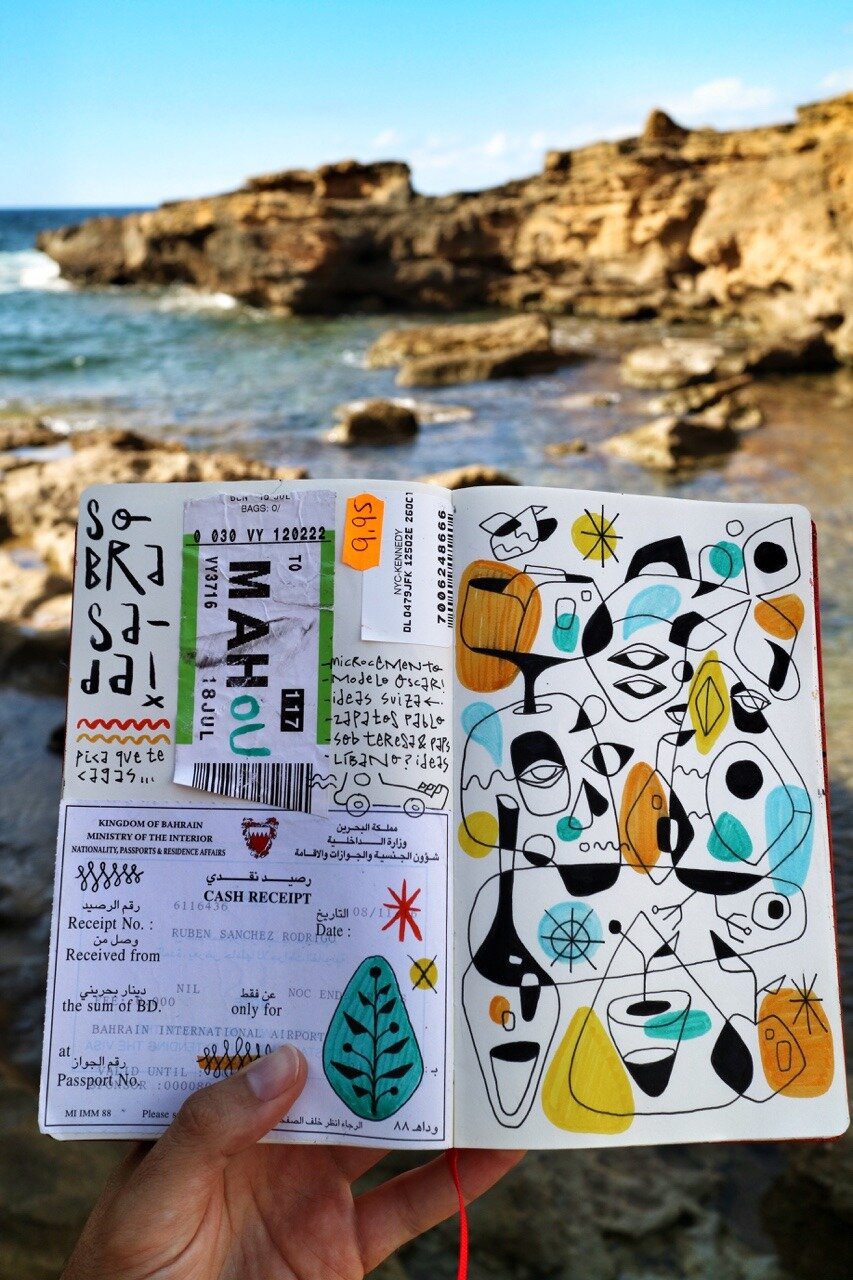 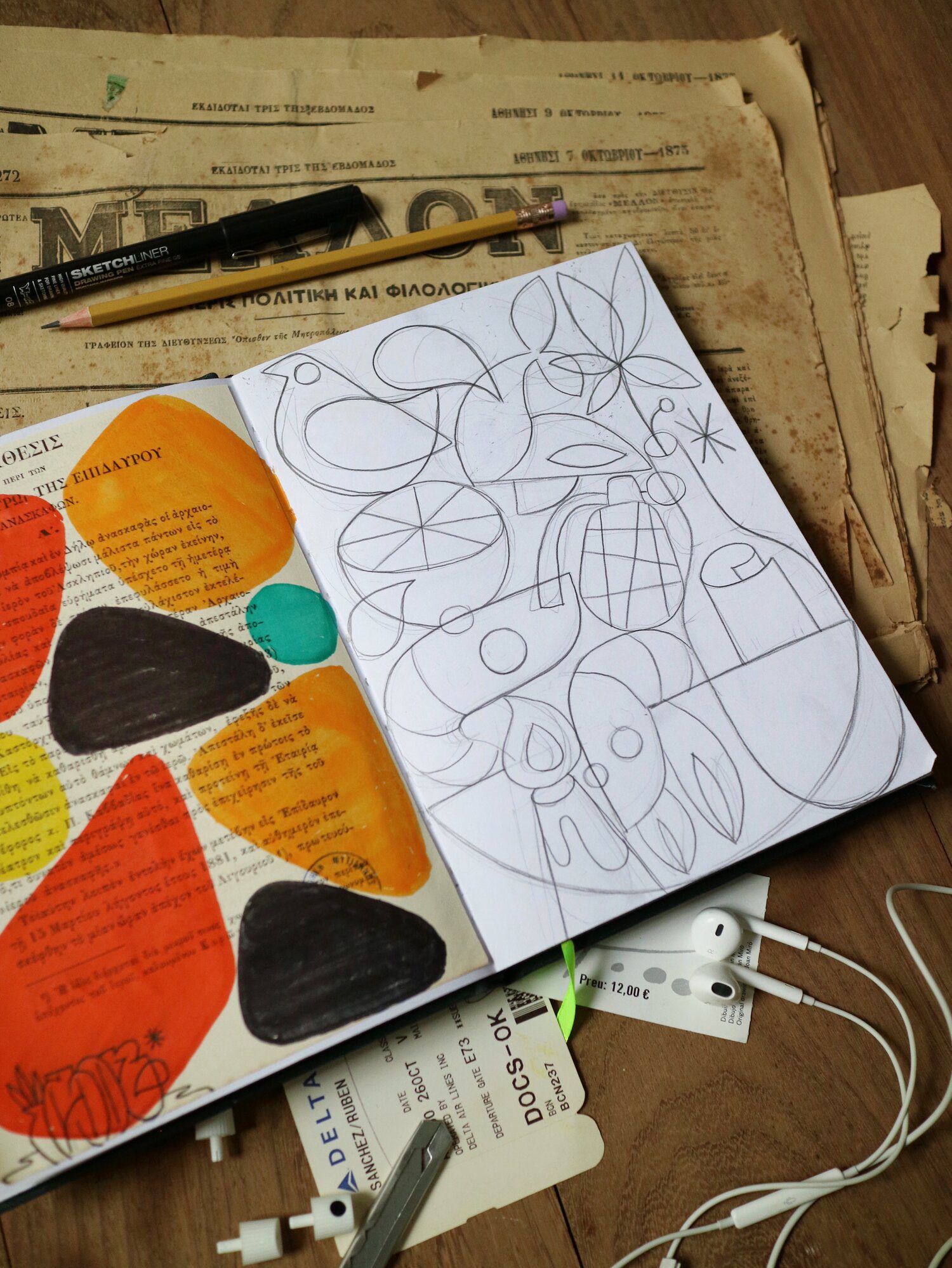