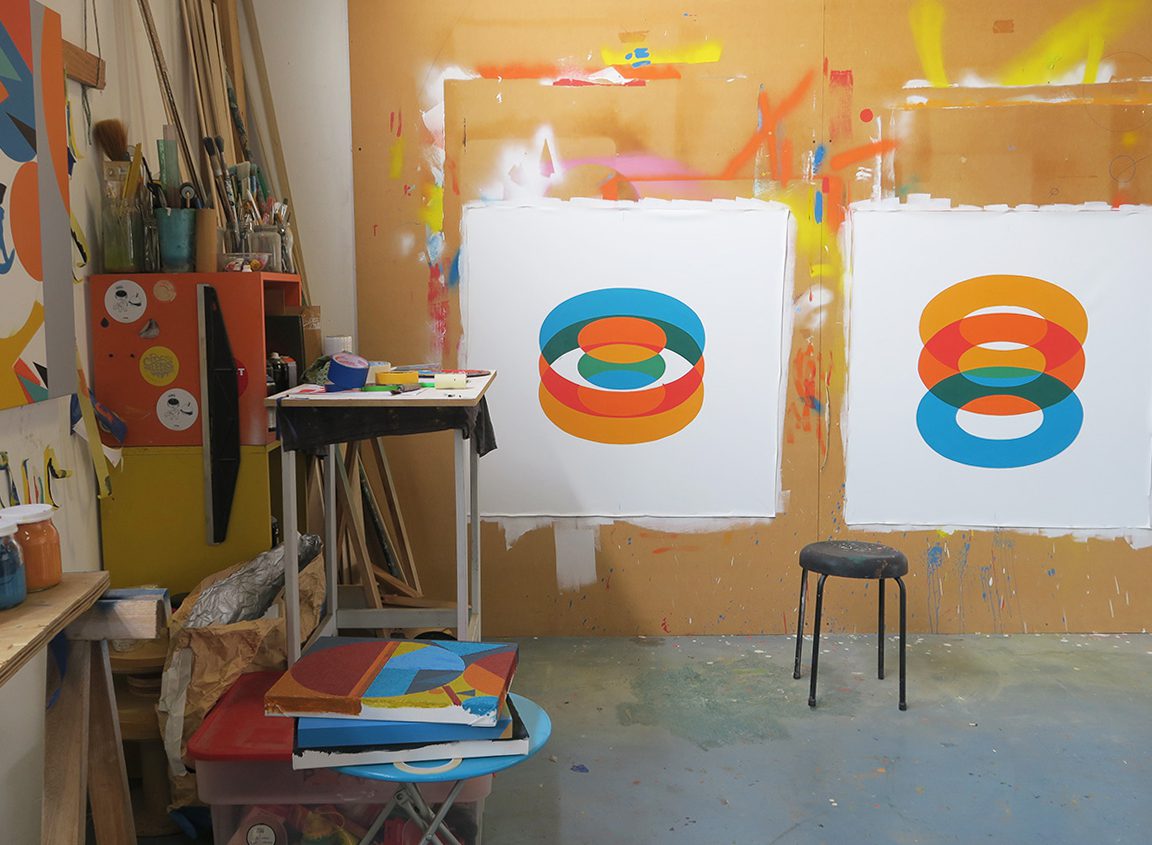 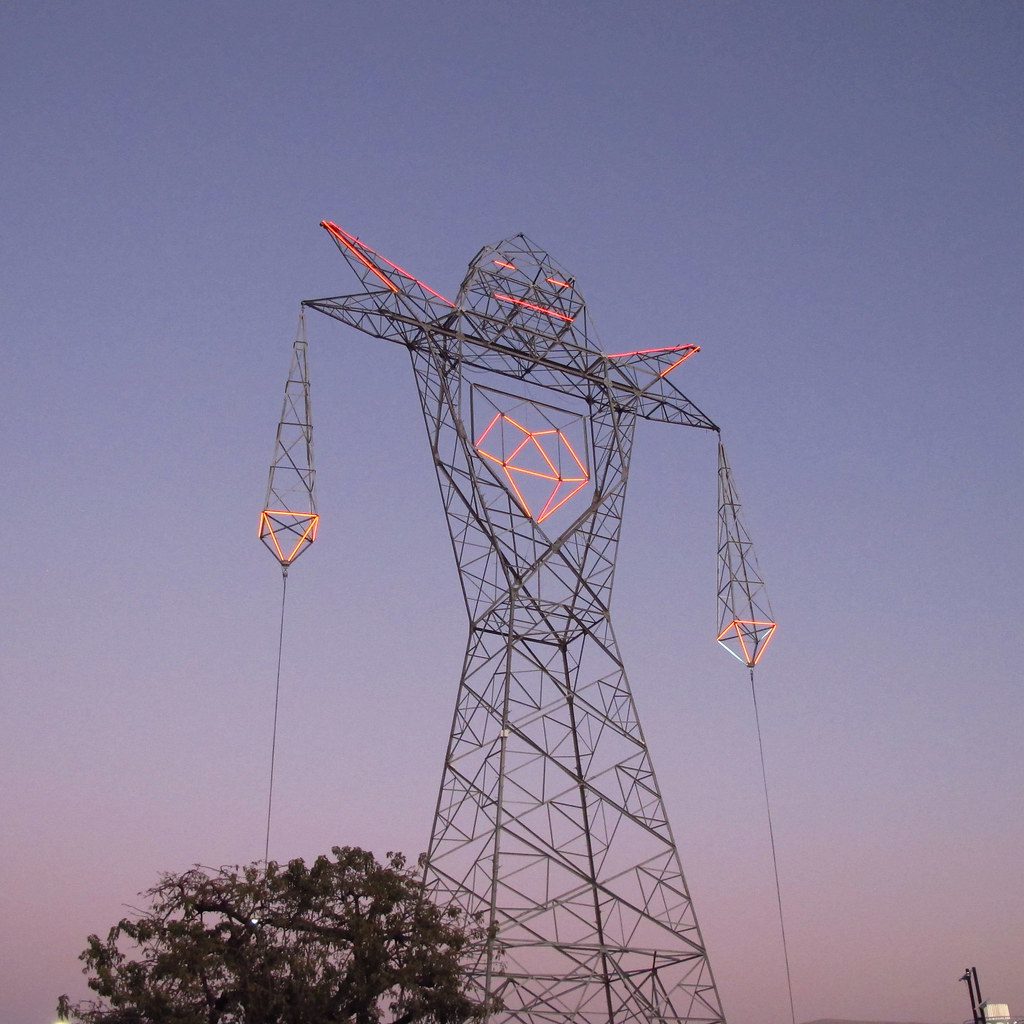 ‘Coloso’ in Buenos Aires by DOMA 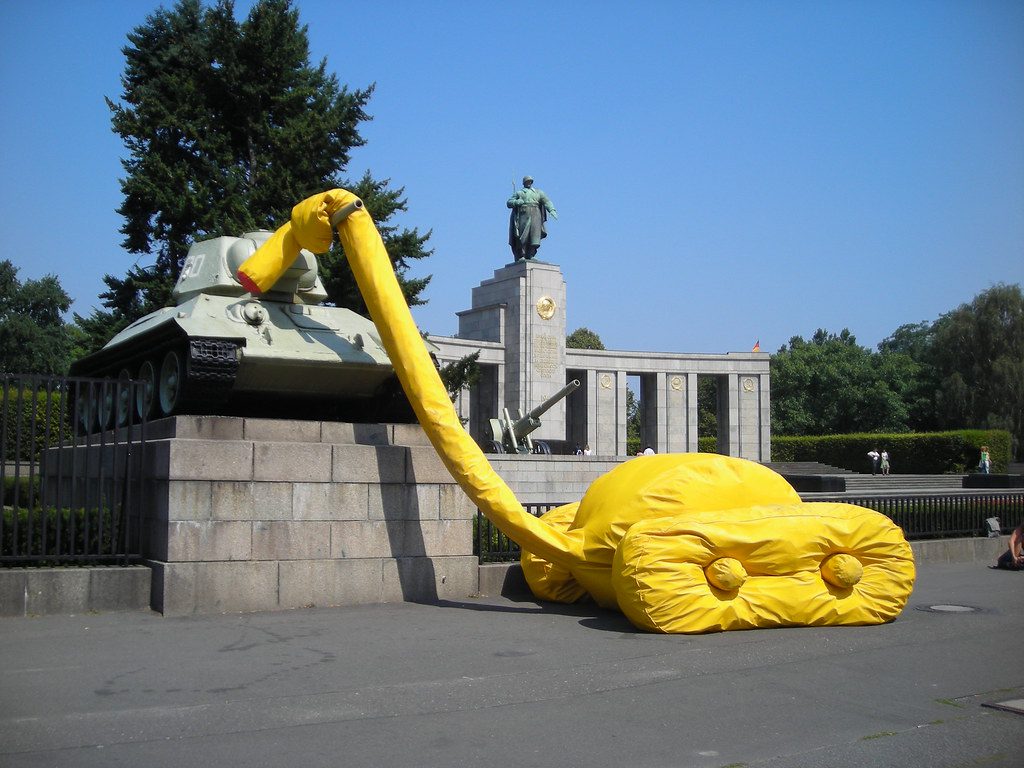 DOMA Collective burst onto the urban art scene in Buenos Aires in 1998 with its stencils, installations and guerrilla campaigns with a touch of irony and absurdity. Mariano Barbieri, Julian Manzelli, Matías Vigliano and Orilo Blandini were the members who gave shape to this reactionary artistic proposal, loaded with political content where they tackled the paradox and contradiction of our society through humor and the absurd in the form of installations, urban interventions, public art and even performance. Their moving impulse? That of action-reaction. Today it is Julian Manzelli ‘Chu’ and Orilo Blandini, the first one from Argentina and the second from Brazil, who keep this project alive after twenty years of activity. We sneak into Julian’s studio in Buenos Aires, where they have been confined for more than four months, to get to know the heart of the project but also his most personal work. «Today, my life is divided into two major projects: on one hand, my personal work and on the other hand the work we are doing together with Doma», says ‘Chu’. «With Doma we are now at the point of doing research, writing down ideas, having a lot of conversations… We are at that stage of conceptualization and research, also putting together a whole script for a solo show we have next year”, he continues. The work of Doma, unlike his personal work, is political and above all a critique of the system, seeking that touch of actuality, talking about what is happening to us right now. “Precisely everything that is happening now on a global scale is an incredible material to work with but we are still working on how to do it, it is very early and we have to process it to find a suitable discourse”. In the Villa Devoto neighborhood, Julian Chu opens us the doors of his studio. 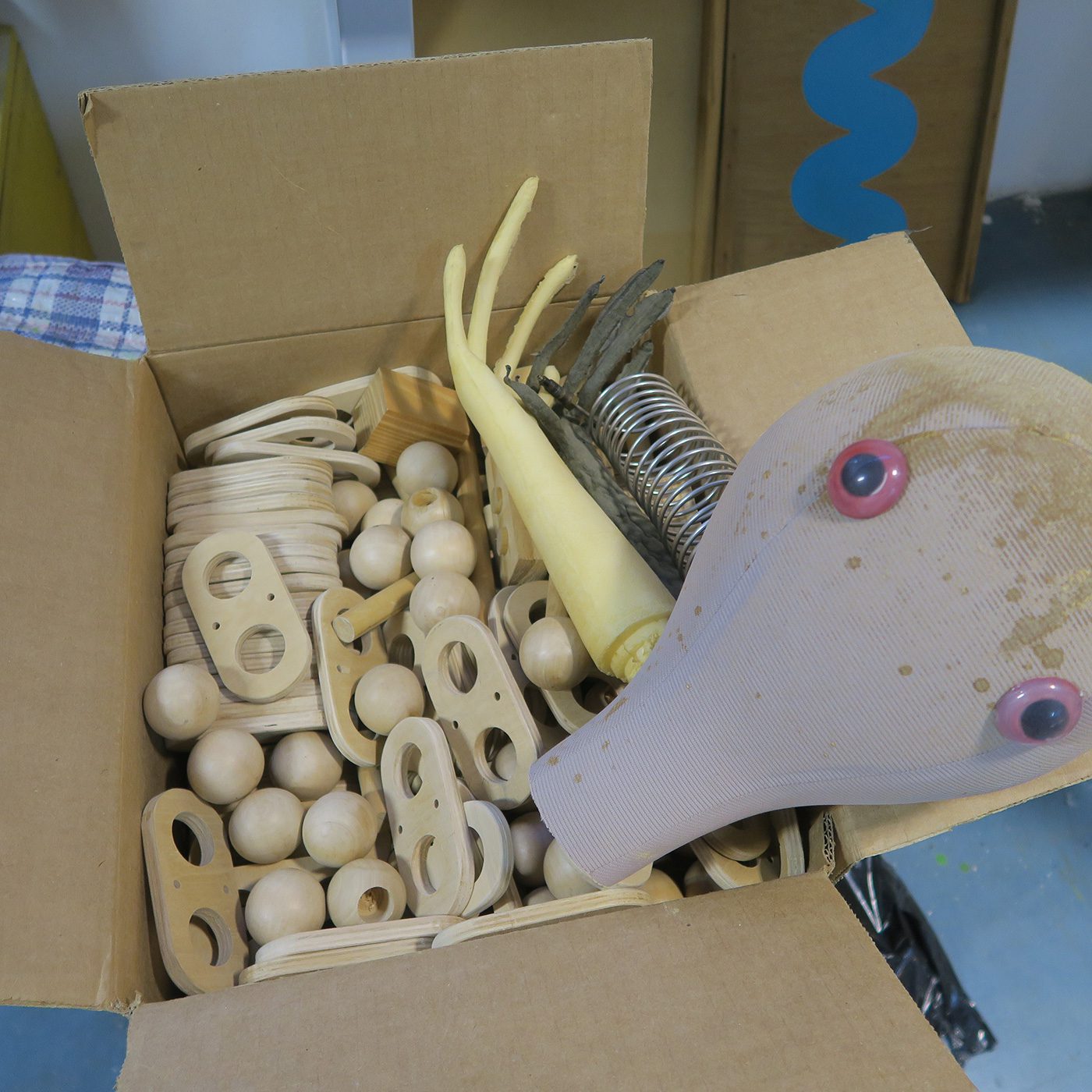 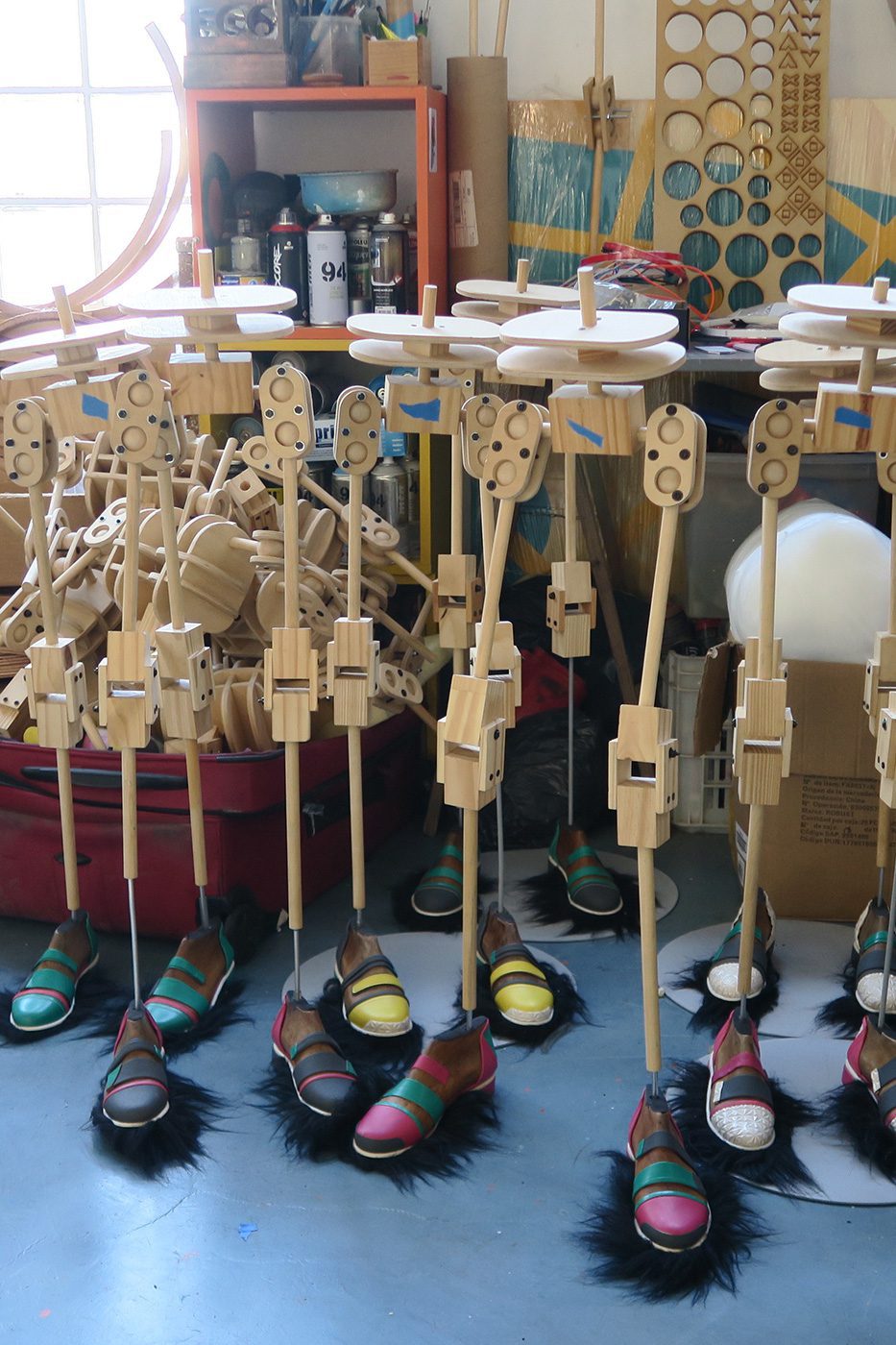 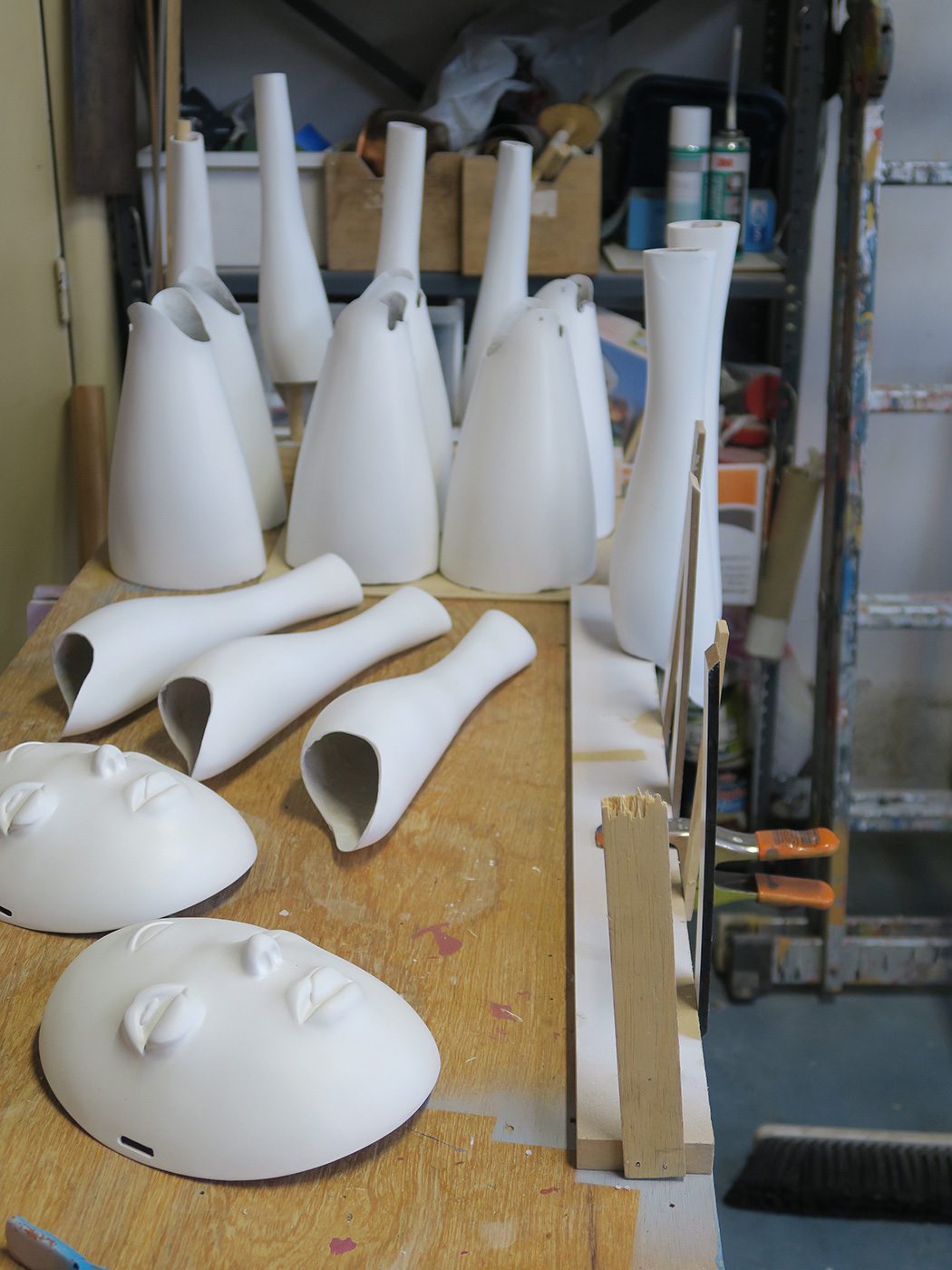 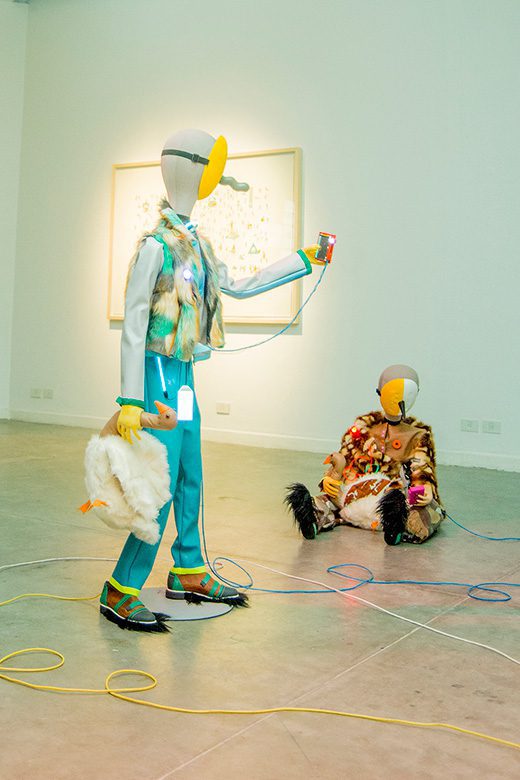 «In the last years my workshop was completely occupied by the projects with Doma, we had many exhibitions and my personal work was limited to big murals and some little things in the studio. In the workshop I started to order all the material of Doma, all the boxes you can see are of what I have been collecting. These are from the last big exhibition of Doma in Recoleta. We created 14 dolls with articulated bodies, seven men and seven women. These are the parts of the production we safe and every now and then we add to it. It’s basically production material» 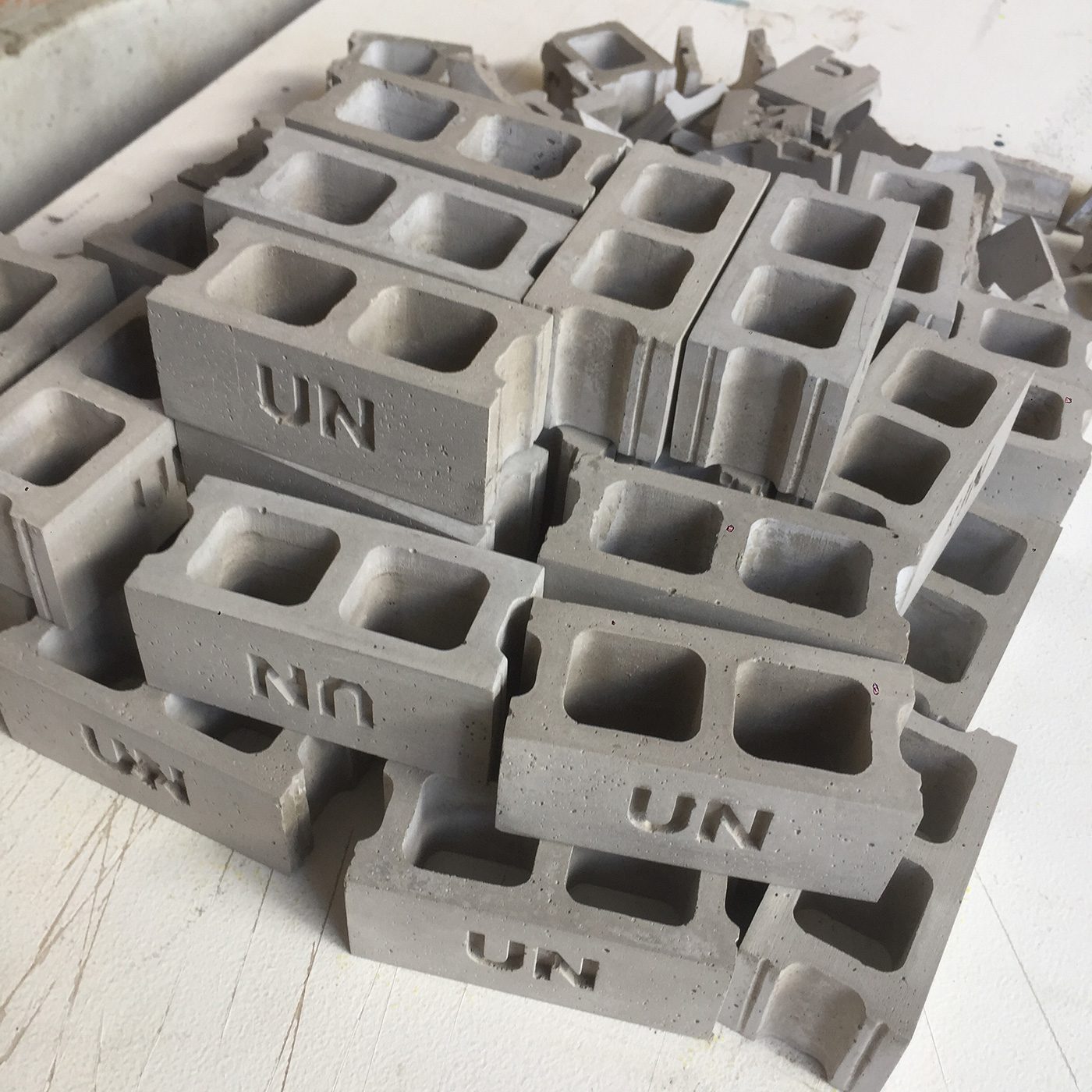 «In the studio, I’ve been pulling out new editions of the cement bricks of the United Nations by Doma. The idea is to create an installation with life-size bricks that occupies a space with a wall in ruins representing these acronyms. What I am working on are models in silicone molds, the size of iceboxes, and in the process of doing so we came up with this small work where we tried all these different ways of stacking them together, so we made a series last year and sold some of them. It’s actually a criticism of these organizations, such as the WHO or the UN, entities that if you start researching them, are very questionable, starting by the way they are funded. The way the UN intervenes in conflicts today is by building walls. It is precisely with this pandemic that these organizations are being called into question, if they did their job right we would not be where we are now. They are ghosts» 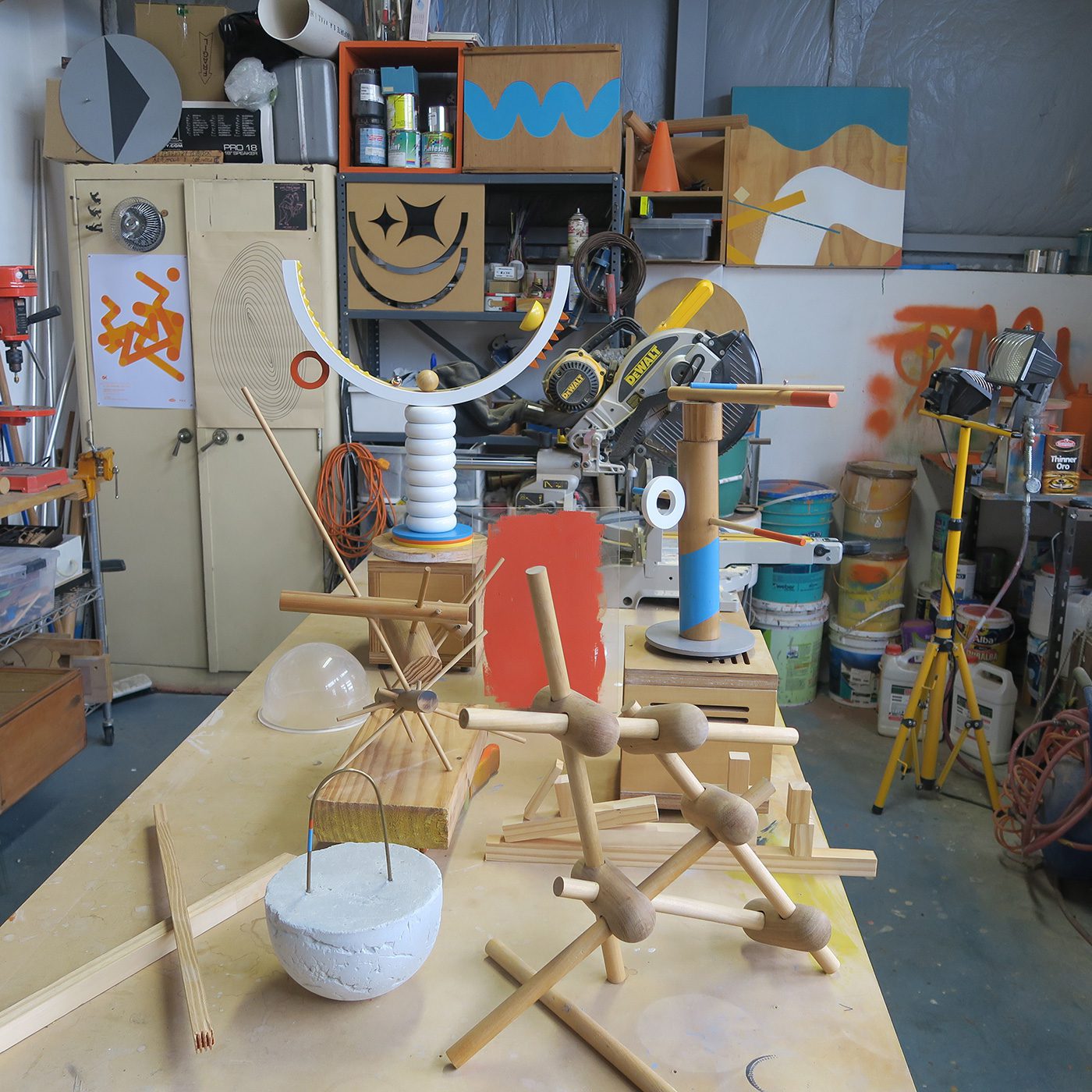 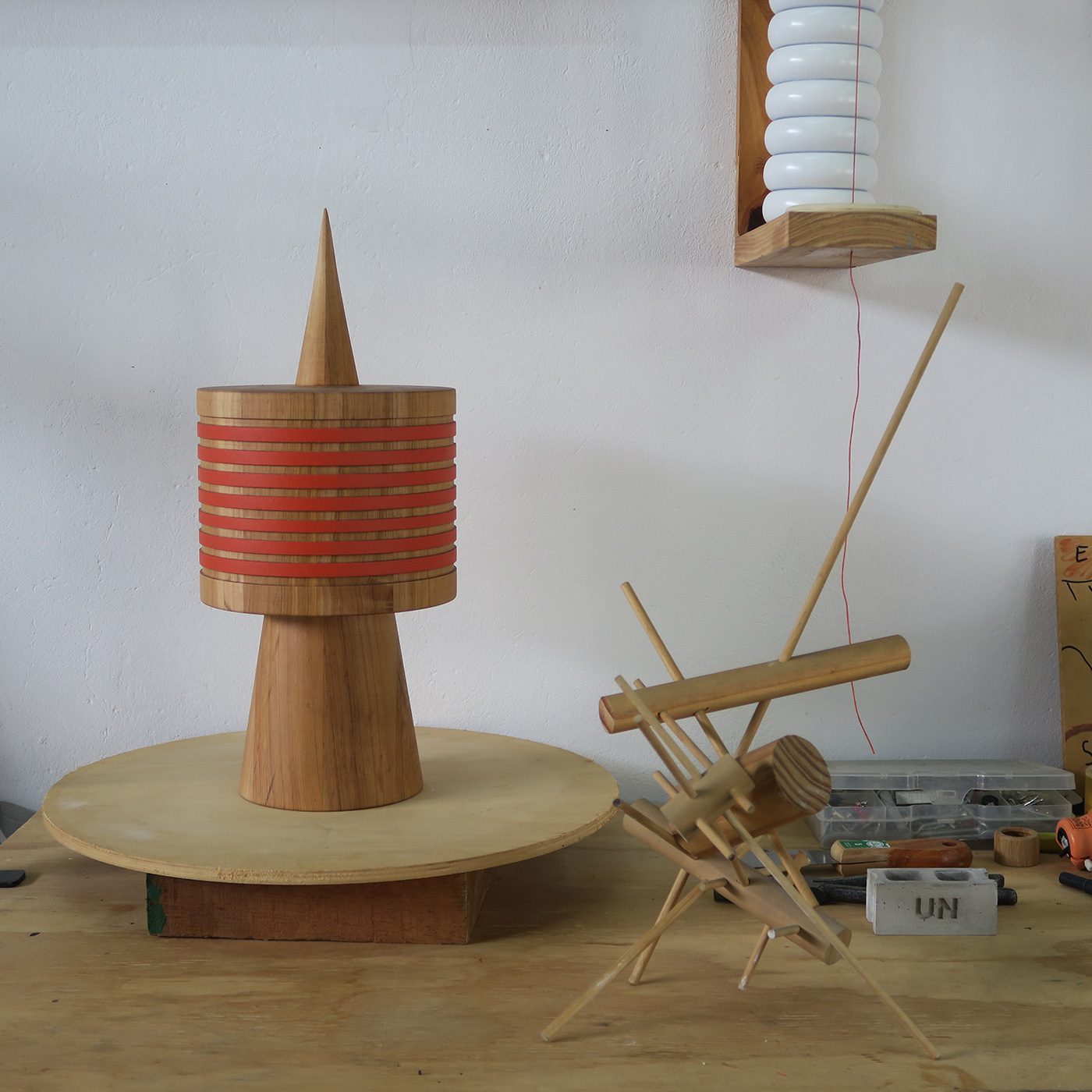 «During these four months that we’ve been confined, I reconnected with a lot of things that I’ve been working on in my head. When I’m at home, which is most of the time, I spend my time on Doma projects that involve sitting in front of the computer, writing, researching… But when I come to the studio, I work on my personal work. I use the desk area to draw or sometimes only to leave things there. On the wall I have some essays of my work, some sculptures… That’s my corner of the carpenter’s workshop. I have all the tools to work with wood, the only thing I am missing is a CNC machine (laser cutting) and the lathe, but I can use them in other workshops of the neighborhood, in Villa Devoto, where mine is. This is where I start playing with the leftovers of sculptures or wooden sculptures. I had a lot of sculptures that I never finished because they lacked resolution… I just finished the wood sculpture you can see on the table. It’s a piece that is born from a square wooden block and molded on a lathe, it is nailed to an axis that rotates at high speed and where you carve the wood with different tools. I make the plans and send them to the studio where it is made and then I give it the final finish and lacquer». 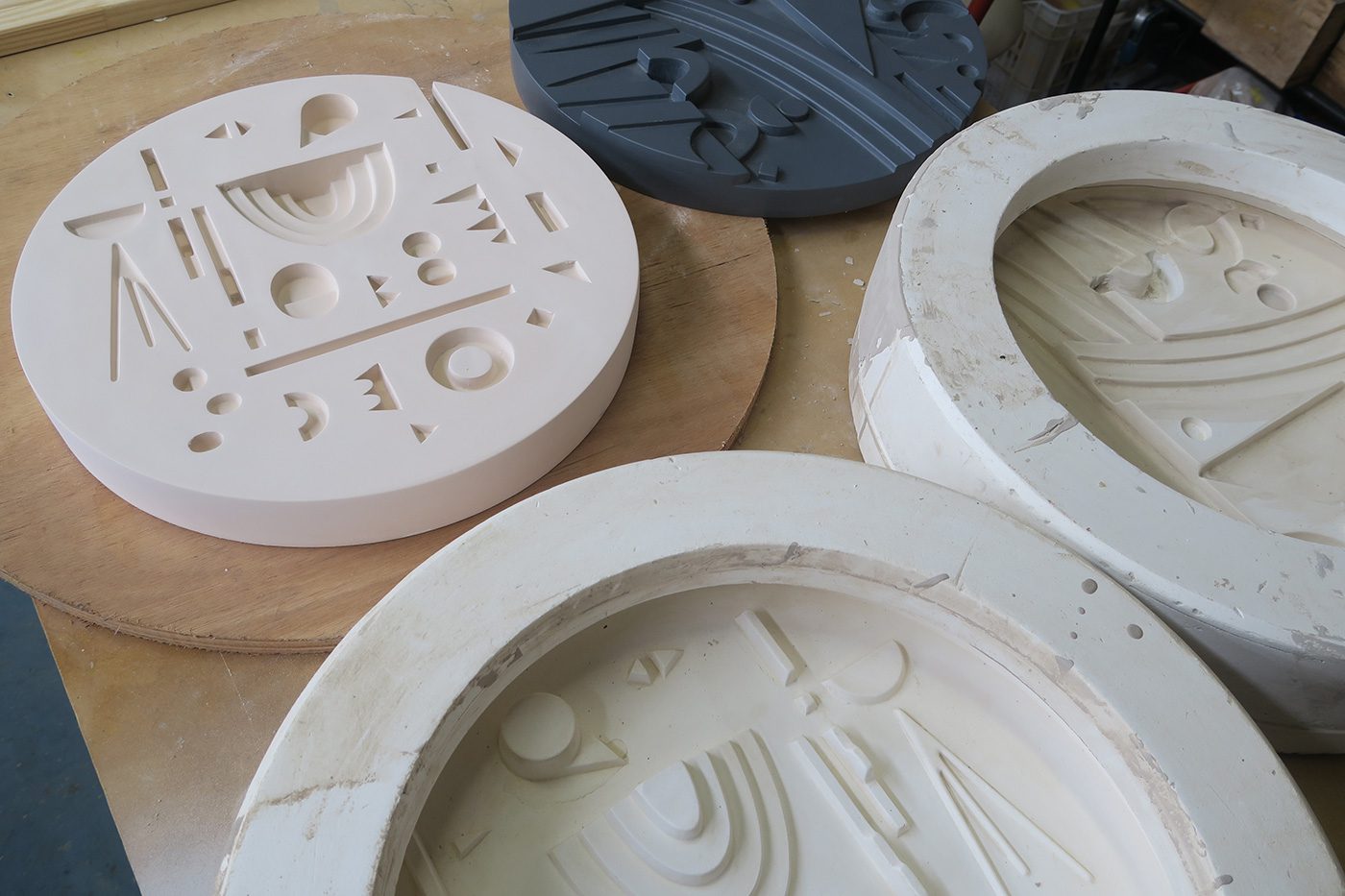 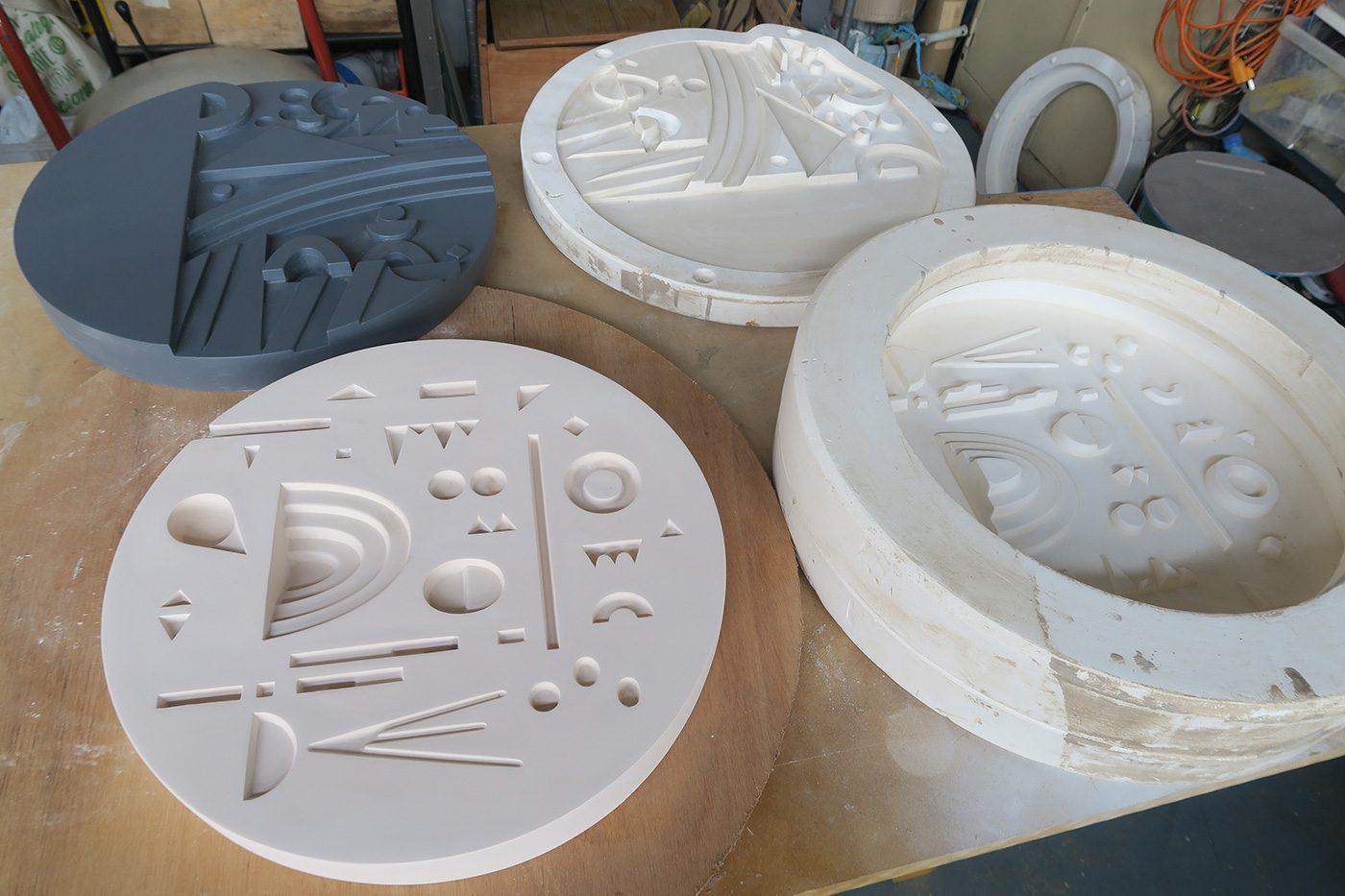 «I’ve been working on this ceramics project since last year, but since Doma was the priority I left it half abandoned. I have been playing with the laser on ceramics for a long time, to create forms and overlap it with wood. I cut them out, then paint them and then superimpose them. The inspiration comes from stone carving, it has an archaeological code. These shapes are related to the solar cycles, the planets… I was very inspired by Carl Sagan’s gold record that he sent into space. My work is very much related to science, anthropology and nature linked to the urban. My inspiration is very different if I work with Doma, which goes towards political criticism, the absurd, humour… than when I do my personal work, which is more concrete in the morphological sense of the word, it’s more formal, has a link with nature and with more classical constructive knowledge. They are different but connect with each other, there is a lot of laboratory, workshop, trial and error, changing materials in both… From this exploration of my work I came to more abstract works without such a direct message. Returning to ceramics, these works are quite new and the first series is planned to be in these classic colors, black and white and with texture, which leads us to the stone carving … But I definitely want to try color in future series». 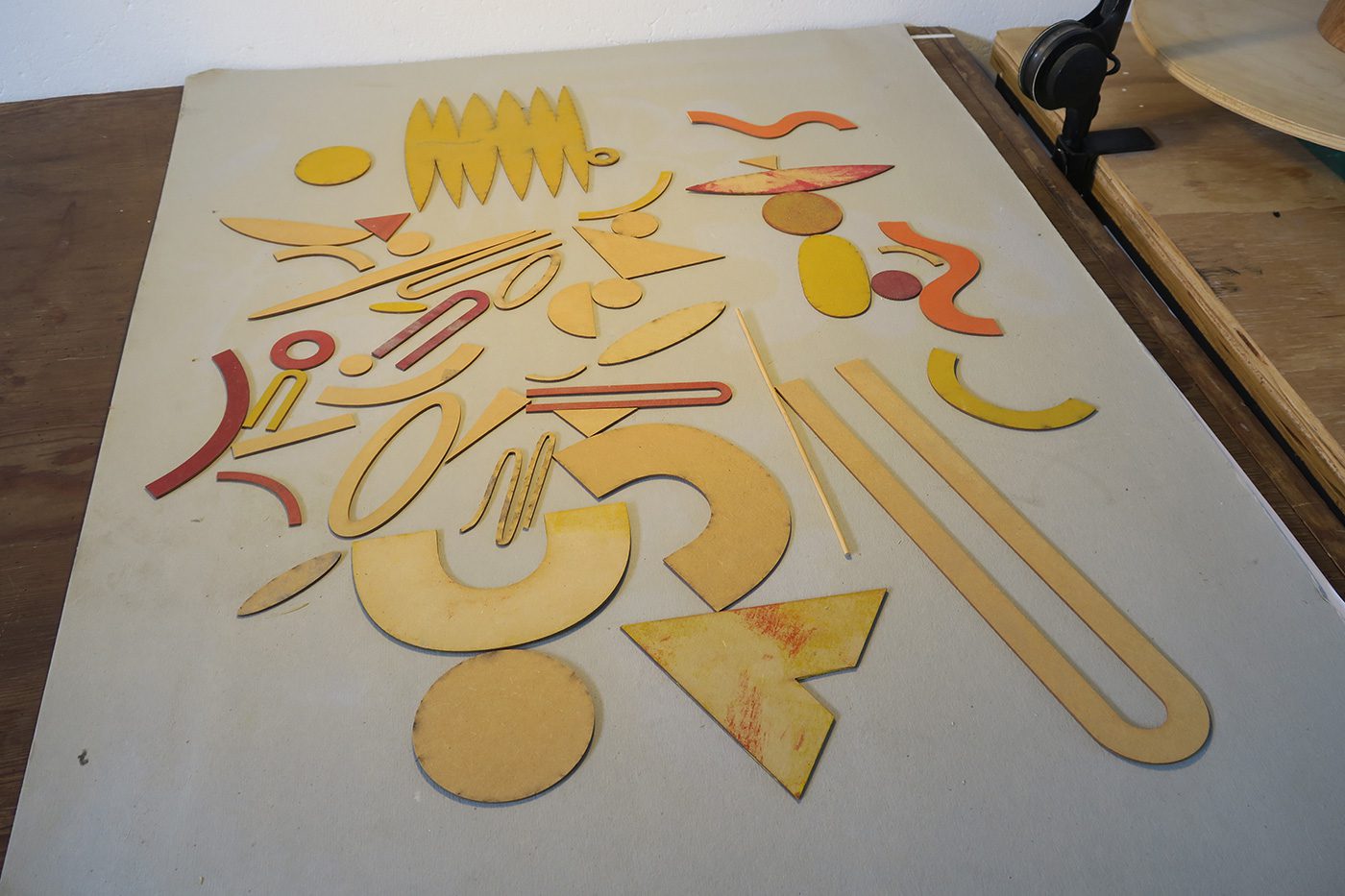 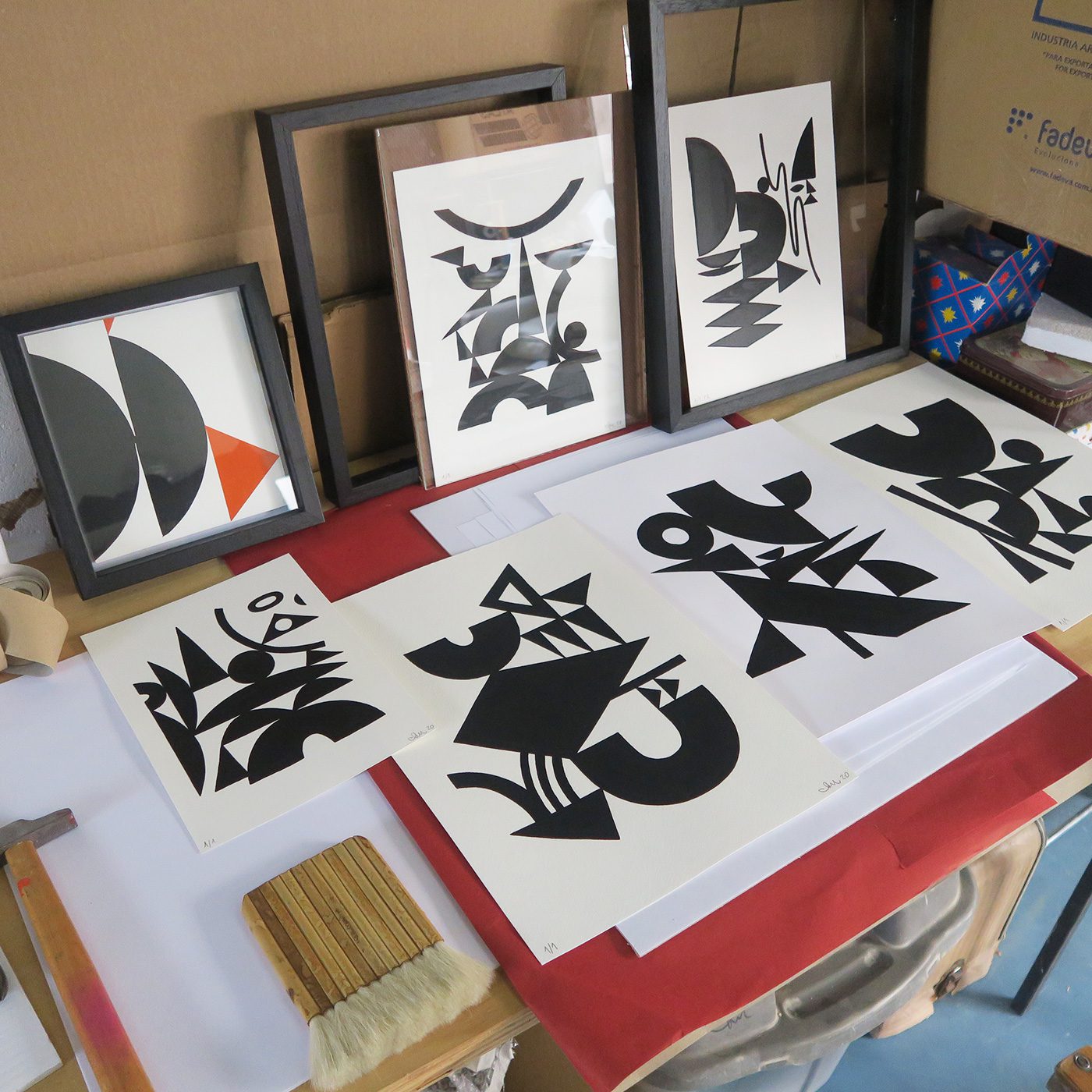 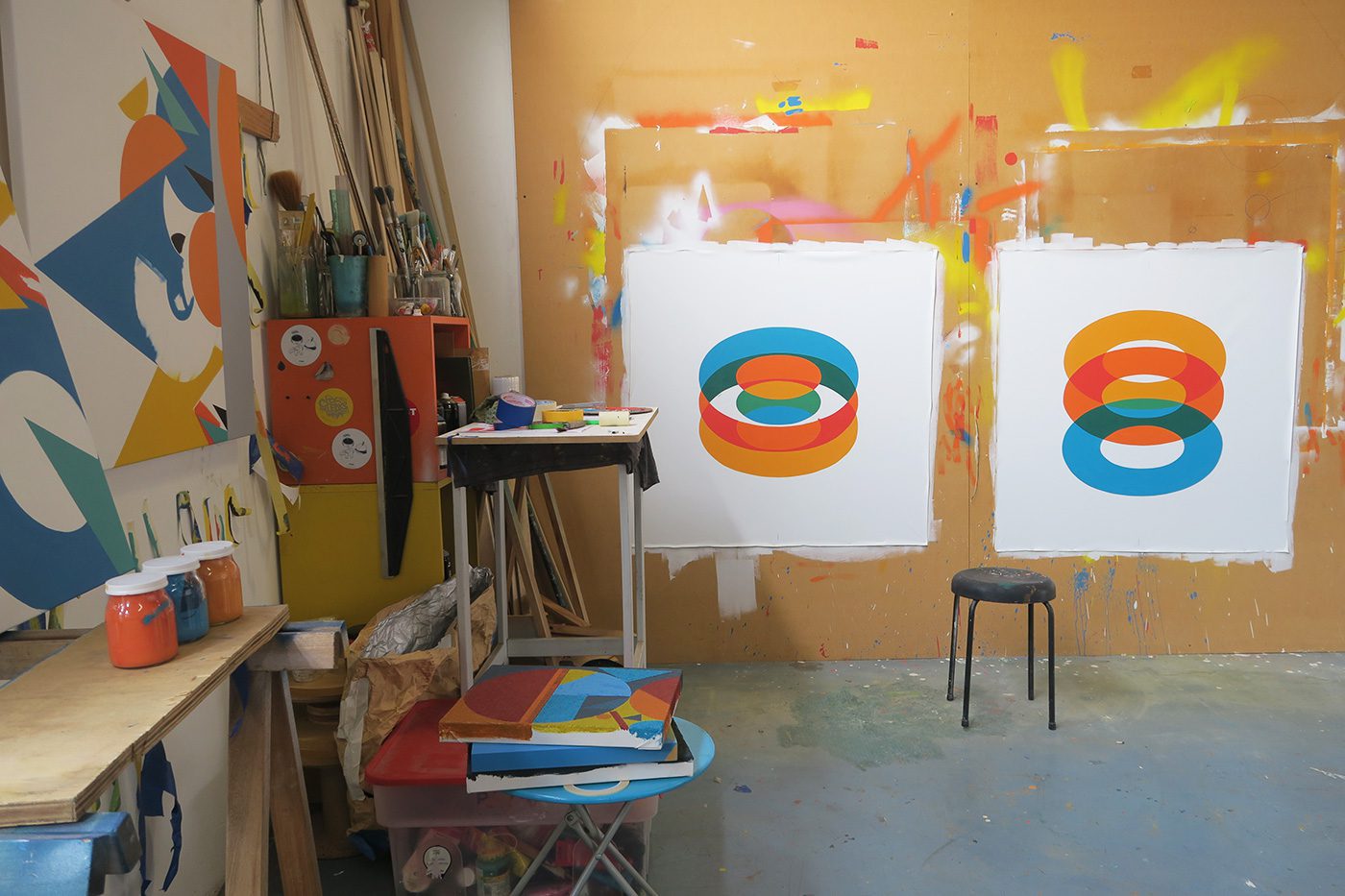 «I want to do a project with engraving. I have been working on the subject of cutting shapes and from these silhouettes I want to create shapes, use them as engraving printing supports. To dye them, to put together compositions and to make different monoprints. These are just trials, but as soon as I can, I’ll take all this material to a press to take out pieces. At the moment this allows me to try compositions, take photos and get ideas for layouts. I also have a series of inks that I started to make at home from drawings in my sketch book. When I was confined I was thinking about passing them with ink onto good paper. And, it worked out well, during the quarantine I already sold a few. Finally I’m finishing these canvases you can see in the last photo. During these four months of confinement, I got a lot of personal work done».