Exhibitions: what will be on display this September 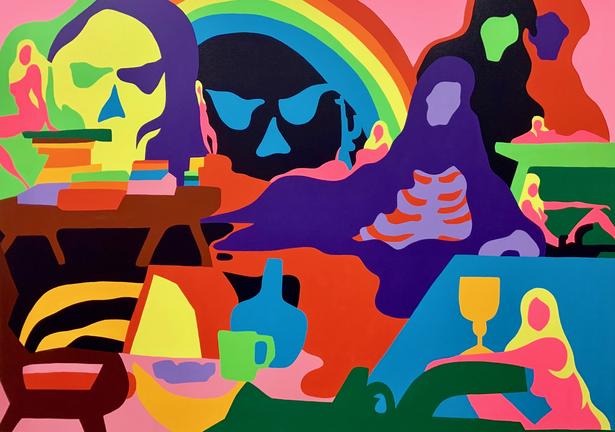 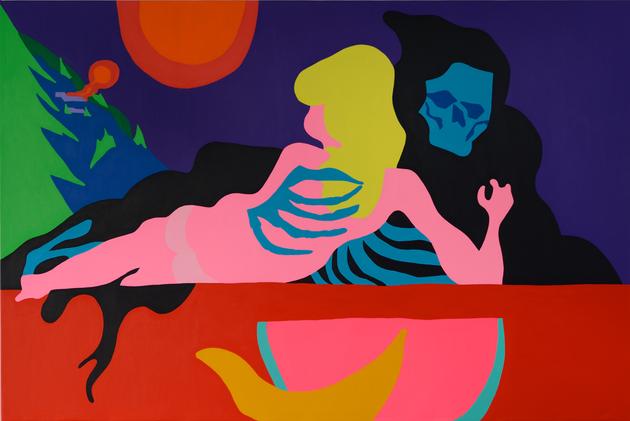 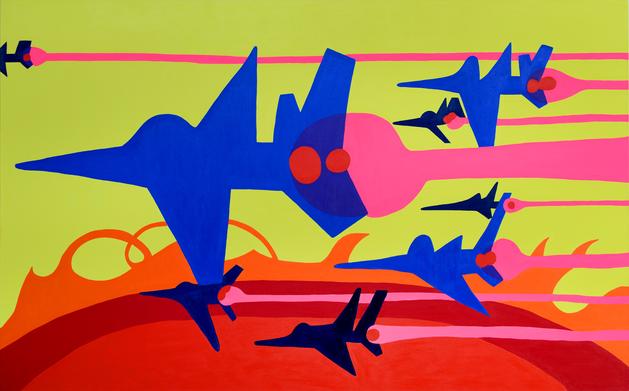 
From September 10th to November 11th

From Thursday 10th to Sunday September 13th, Apertura Madrid Gallery Weekend 2020 will be back kicking off the new Madrid’s art season. After several tumultuous months where many of the galleries have had to cancel or reschedule their exhibitions Apertura manages to celebrate another year with 48 exhibitions openings on the same day (and all of them for free!). One of the favorites is the one presented by the gallery Javier López & Fer Francés that brings for their sixth time the American artist Todd James (New York, 1969). Influenced by pop culture, comics and cartoons, this self-taught artist who comes from the New York graffiti scene, where he used to sign as REAS, he transfers today that heritage to his works through bright colors and organic and fluid forms. This time he will present a selection of recent works that include still lives and bourgeois interiors with women in a hedonistic attitude, tanks and fighter planes with human features among others scenes that inhabit his usual iconography.

Also noteworthy is the individual exhibition of Barcelona-born Pere Llobera “Una perfección más pequeña” at F2 Galería and the collective exhibition presented at Nieves Fernández Galería with works by Rogelio López Cuenca, who, along with other artists, presents a critique of production systems in contemporary economics and politics. 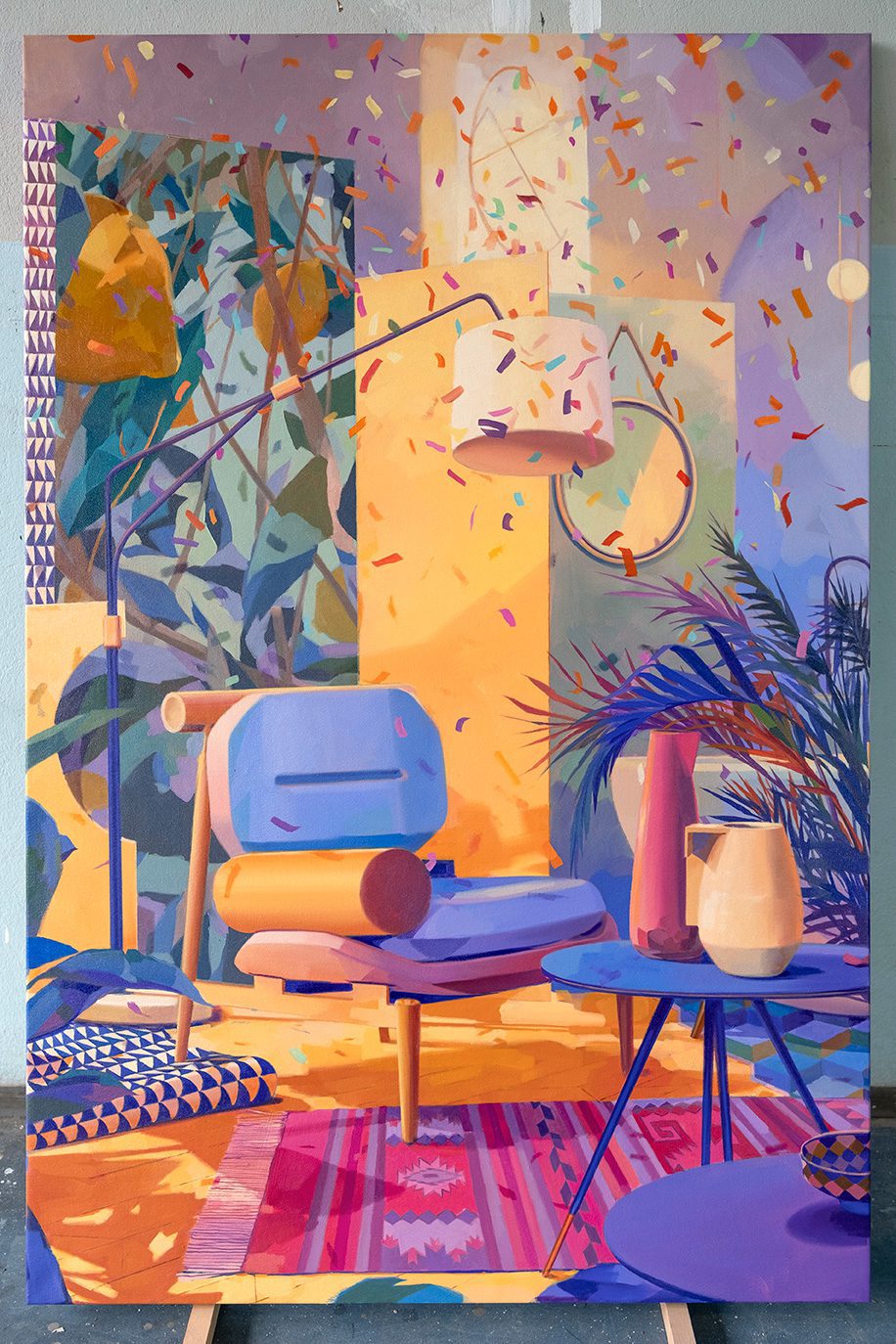 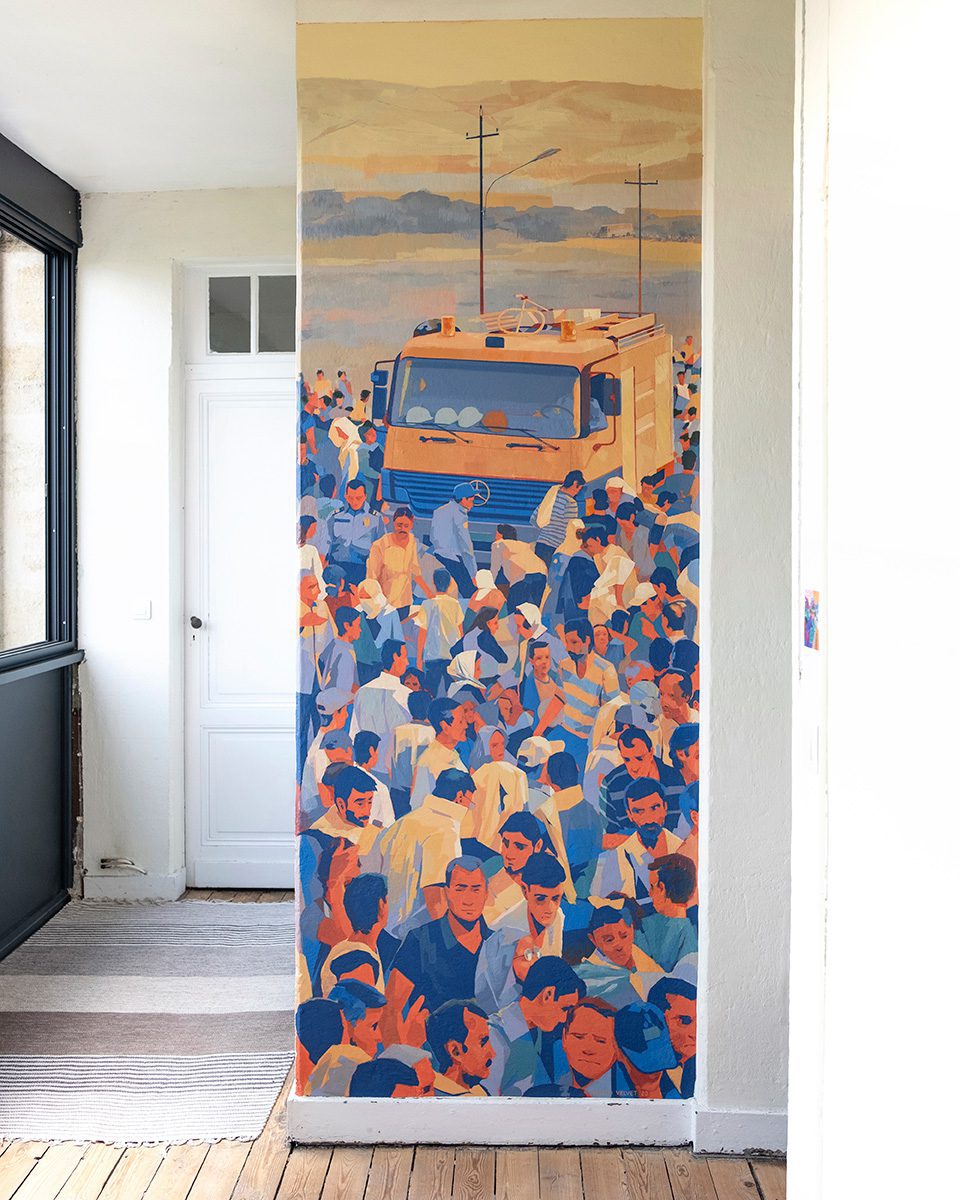 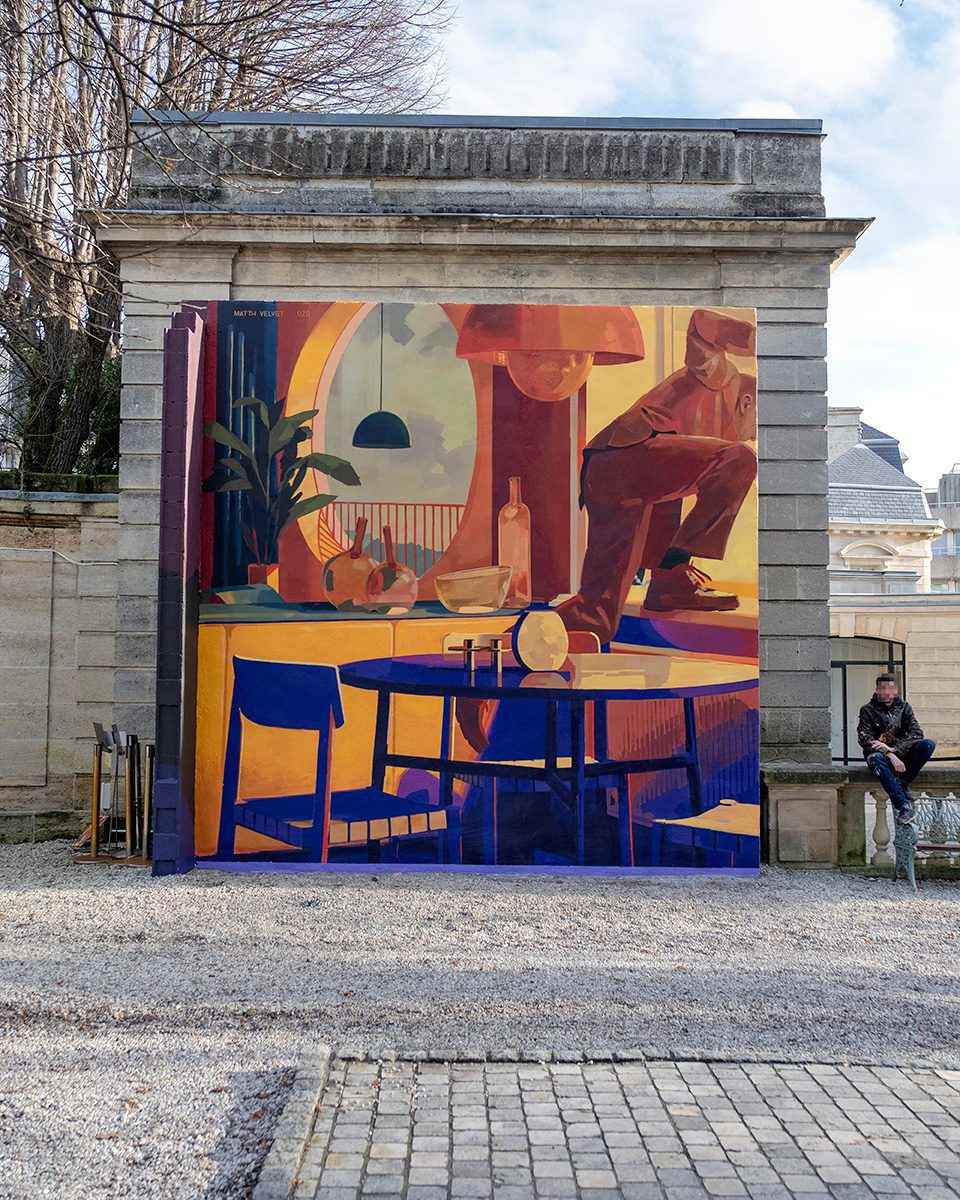 From September 18 from October 24th

The maritime and industrial landscapes of western France permeated the early artistic research of artist Matth Velvet (La Roche-sur-Yon, 1986), who began by combining his graffiti practice with the applied arts until he focused entirely on oil and acrylic painting. His work describes human behavior through the prism of the object, architecture, or through the representation of crowds and characters that he brings out from personal memories and experiences. «My images invite us to look with nostalgia at that reign of careless consumption that still prevails in many areas despite the fact that we are living in an era in which new aspirations are taking hold, oriented towards industrial models far from the mass production of objects. I want to paint common dreams, mediocre interests», says Velvet. Madrid’s La Causa Gallery is presenting the French artist’s work for the first time in Spain, bringing together a series of oil paintings on canvas and on wood, drawings on paper, and even a door that the artist has intervened, and a mural intervention in the exhibition space. 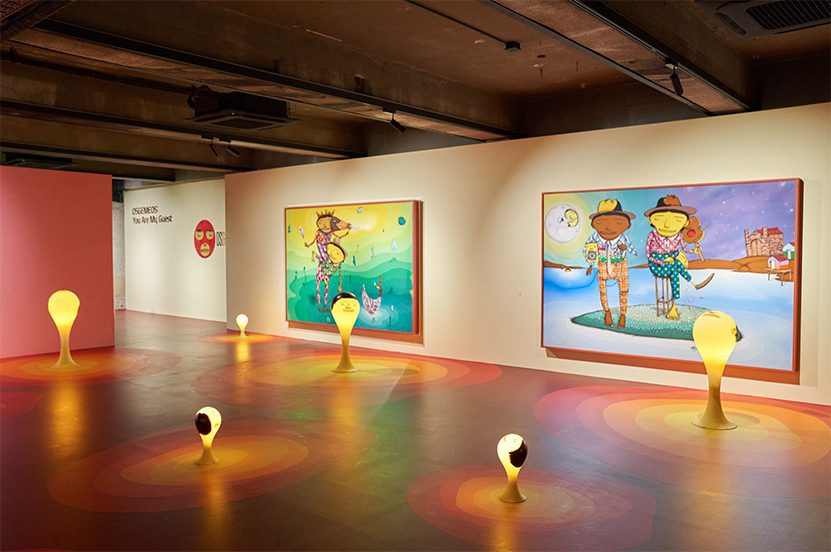 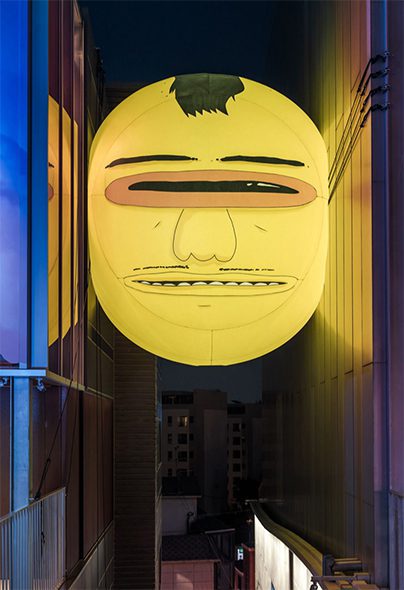 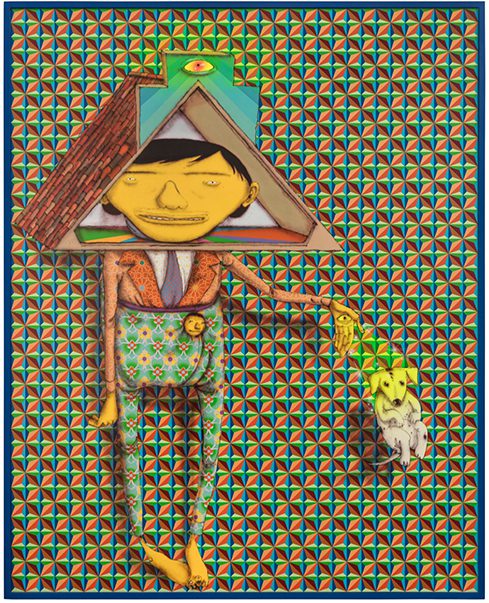 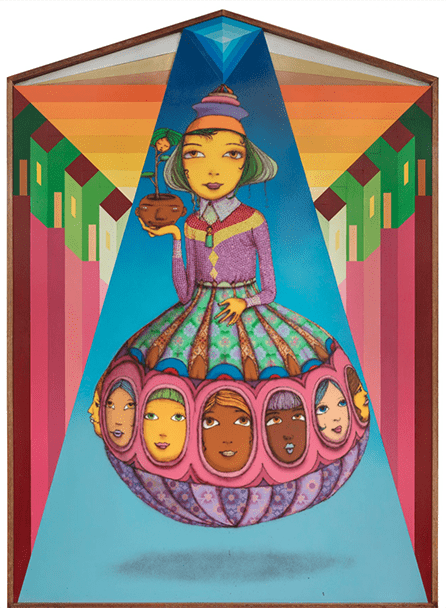 The exhibitions of the Brazilian twins, global references in urban art since the 80’s mostly known for their yellow characters that come and go from the walls, come just like them, by pairs. On the one hand, Os Gemeos will present until October 31st at the Lehmann Maupin Gallery in New York “Portal”, their second solo show in this space with new works that will explore a world of dreams and fantasy by repeating geometric motifs reminiscent of temple architecture and other abstract figures that will lead us to Op Art. This exhibition is in addition to the one already underway since mid-July that will continue on view until October 11th at the Storage by Hyundai Card space in Seoul, where they presented “You Are My Guest”, with a selection of fourteen paintings, sculptures and site-specific installations, in which a large yellow inflatable head, placed between the two buildings of the space, stands out and its pictures has gone across the network in the past weeks. 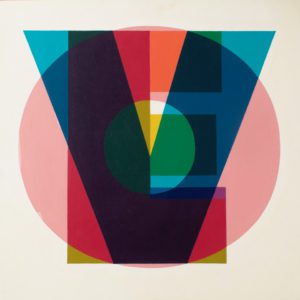 From September 17th to October 11th

After a period of reflection and introspection, and fully engaged in their latest mural project painting the sports center designed by architect Miguel Fisac in Getafe, the boys of Boa Mistura return to the galleries. And they do it with an exhibition in the Parisian Adda & Sarto that will be inaugurated during the Paris Gallery Weekend where they will present their latest work on paper. «”Harmonies” is born from an introspective moment, from a trip to our inner nature», they say. A series of words presented through the superimposition of their letters are the graphic representation of that immersive journey. Concepts that embody some of the qualities that define them and in whose harmony lies their essence as human beings. 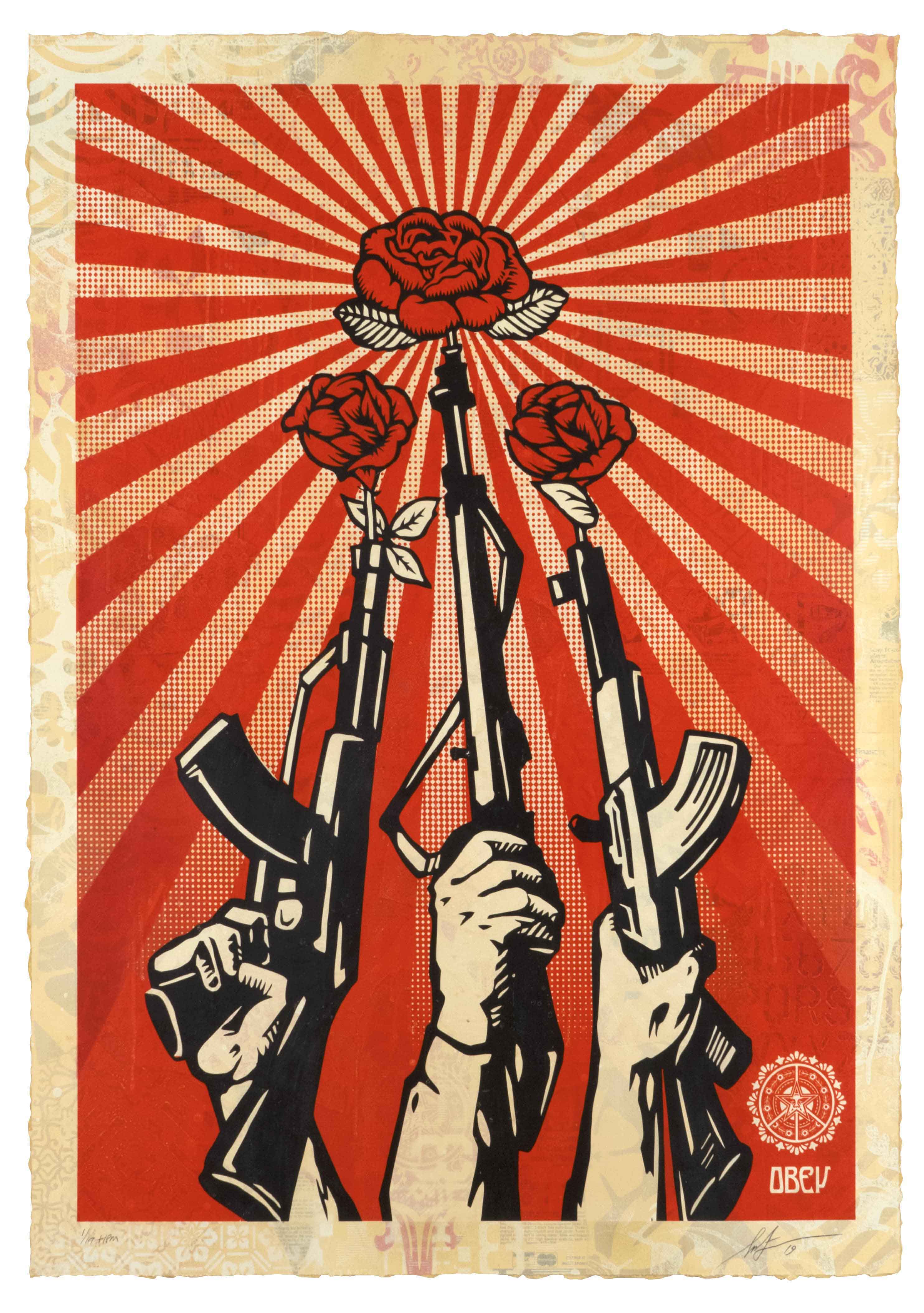 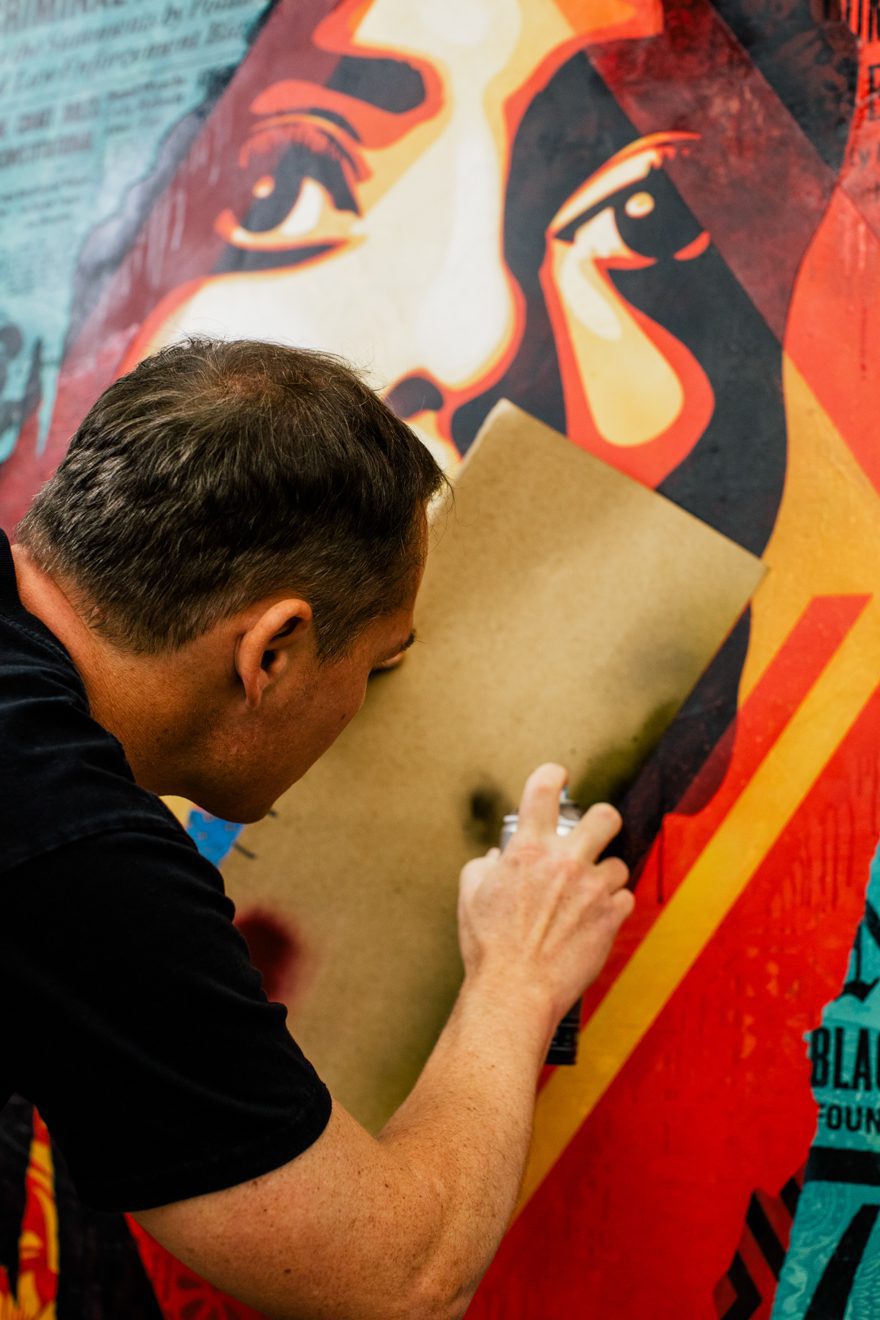 From September 17th to November 22nd

Shepard Fairey, the North American artist also known as Obey (South Carolina, 1970) arrives in Rome to present one of his most important exhibitions to date. Curated by himself and Claudio Crescentini, Federica Pirani and the Milanese gallery Wunderkammern, he will present “Shepard Fairey / Three decades of dissent”, a project specially created for the Galleria d’Arte Moderna space with up to 30 new graphic works never presented before and where he will address issues such as the fight against racial violence, the defence of human and gender dignity or the protection of the environment. These works will be in dialogue with other works from the contemporary art collection of the Capitoline Museums and will on display until November 22nd.

The iconic photographer Martha Cooper (Baltimore, 1943), one of the most recognized in the Street Art scene, presents at the Berliner museum Urban Nation the first retrospective of her work. “Martha Cooper: Taking Pictures” starts out with the pictures captured with her first camera back in 1946, when she became the first woman photographer to work for the New York Post, to her famous photos tracking down the first graffiti artists who painted New York City’s subway trains in the 1970s to her more recent work with street artist icons like the 1UP Crew, keeping her photographic work at the top. A recompilation of more than six decades that will also show her most personal experiences, some daily life reflections and others from the trips and commissions she made for travel papers such as GEO Magazine. From this website the museum will be broadcasting the first opening night with interviews and documentary material. Not to be missed! 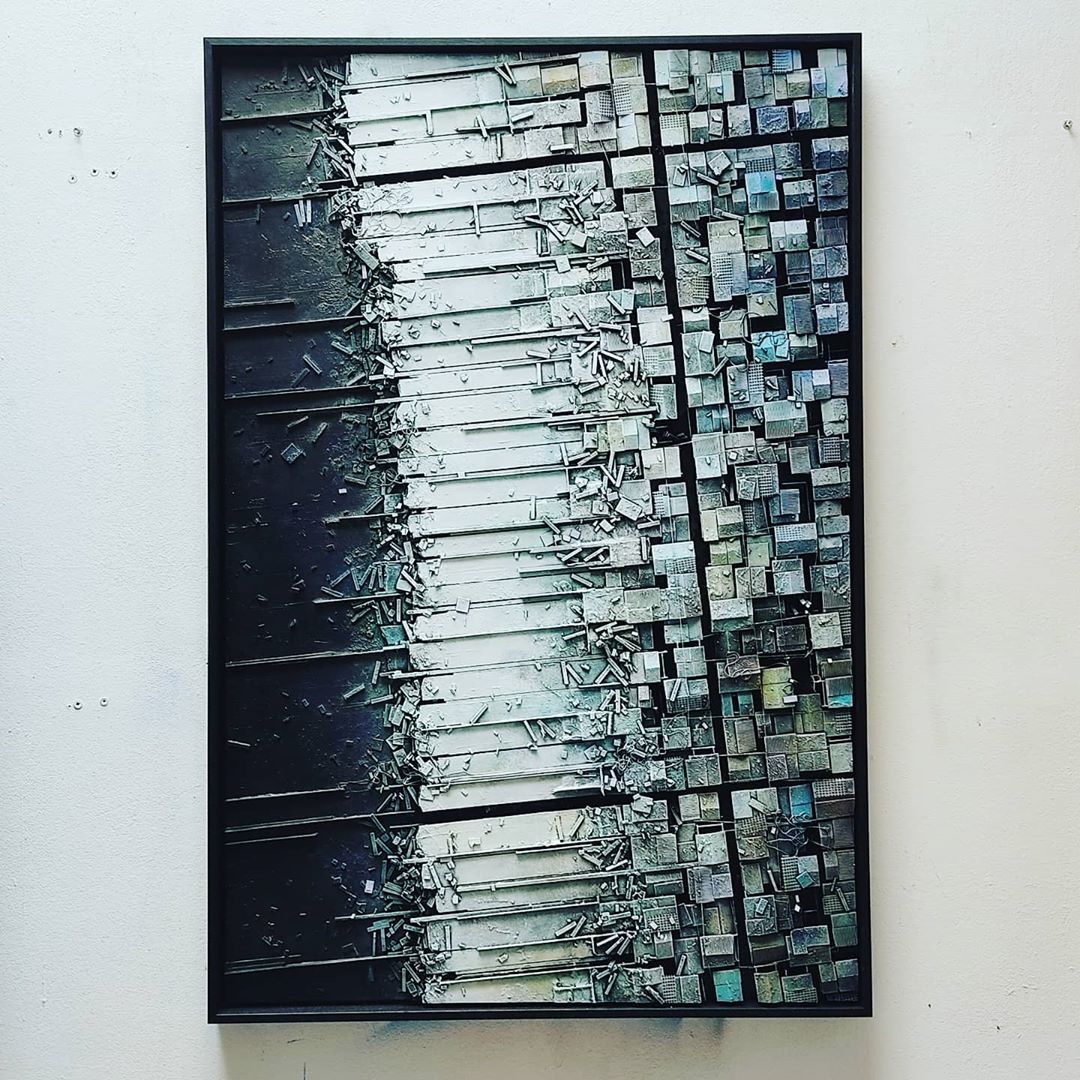 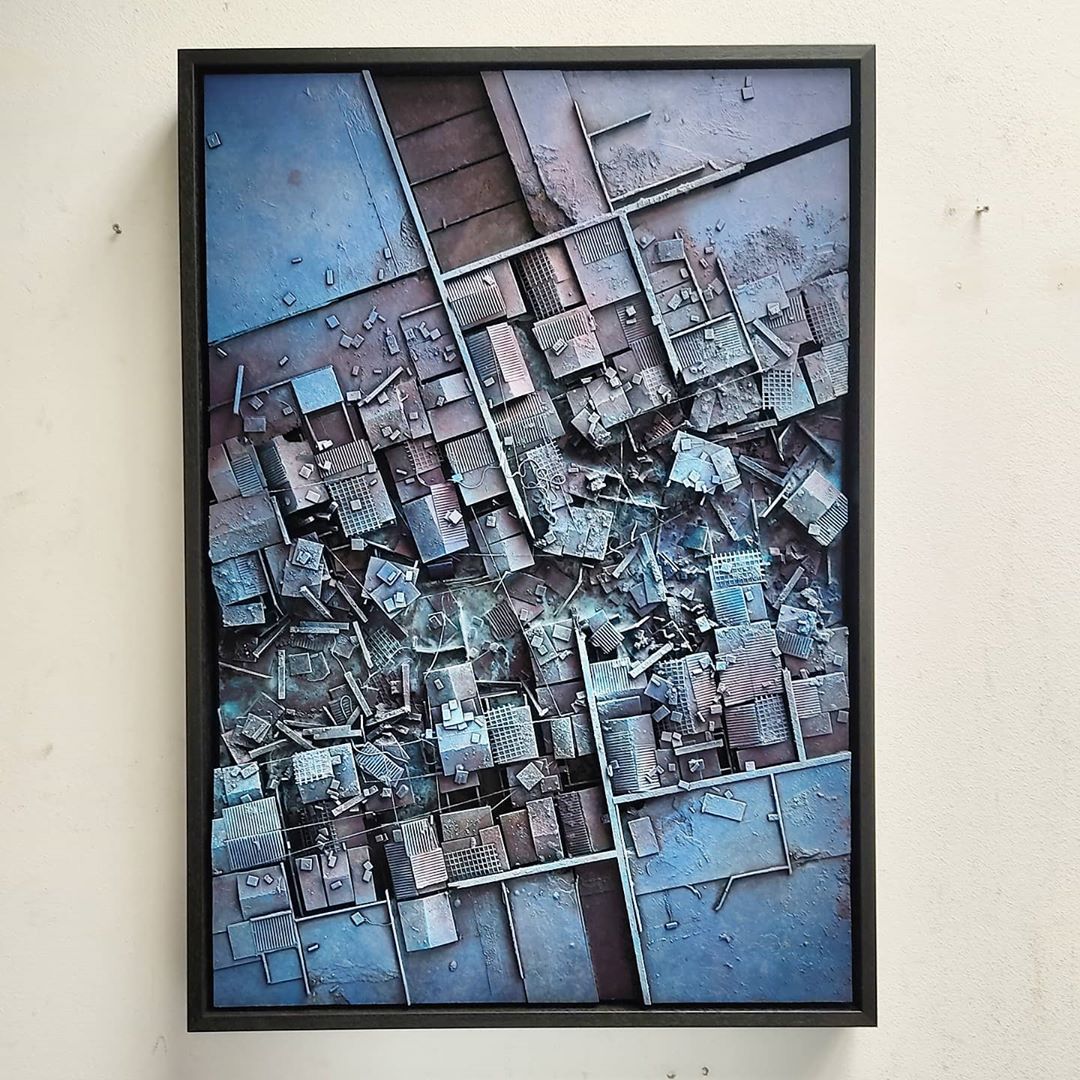 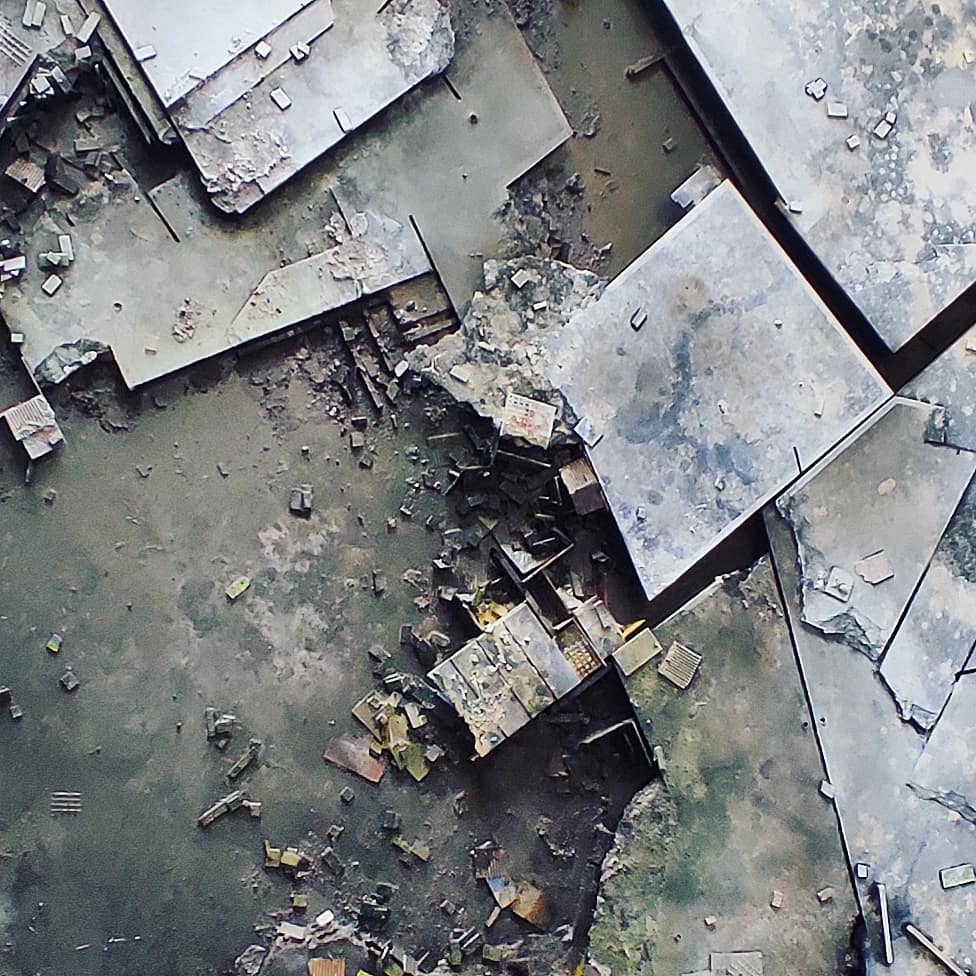 
From September 9th to October 10th

Hendrik Czakainski (Aurich, Germany, 1979) is one of the favorite artists of the German gallery Urban Spree, which presents “Nonpoint Sources”, his fourth solo show with them. This time he will fill the room with his large scale wall sculptures that he makes through the particles and water drops of pollution that our civilization generates, creating his imaginary constructions. We do not only see the structures, we see the floods and the elements, we see how the artist skillfully paints and distorts the structures he so patiently erected. It will be on display from September 9 to October 10 and will be part of the galleries participating in the Berlin Art Week Opening this month.