Art to conquer the space 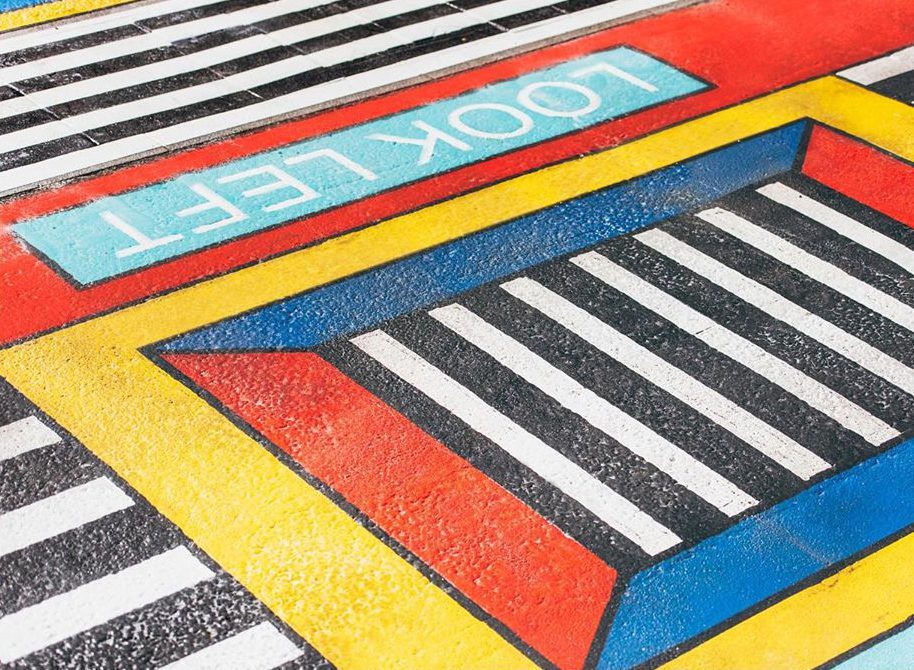 And no, we don’t mean outer space. No constellations, no planets. We are talking about the public, the private, the space in general: about art in the city. Museums, soccer stadiums, restaurants, zebra crossings or tunnels for pedestrians. The city bows down to the artists in order to value their work in the public (and not always so public) space to make it shine in the eyes of those who observe it and interact with it. We go through some of the latest interventions and some older ones that we can’t keep out of our mind. 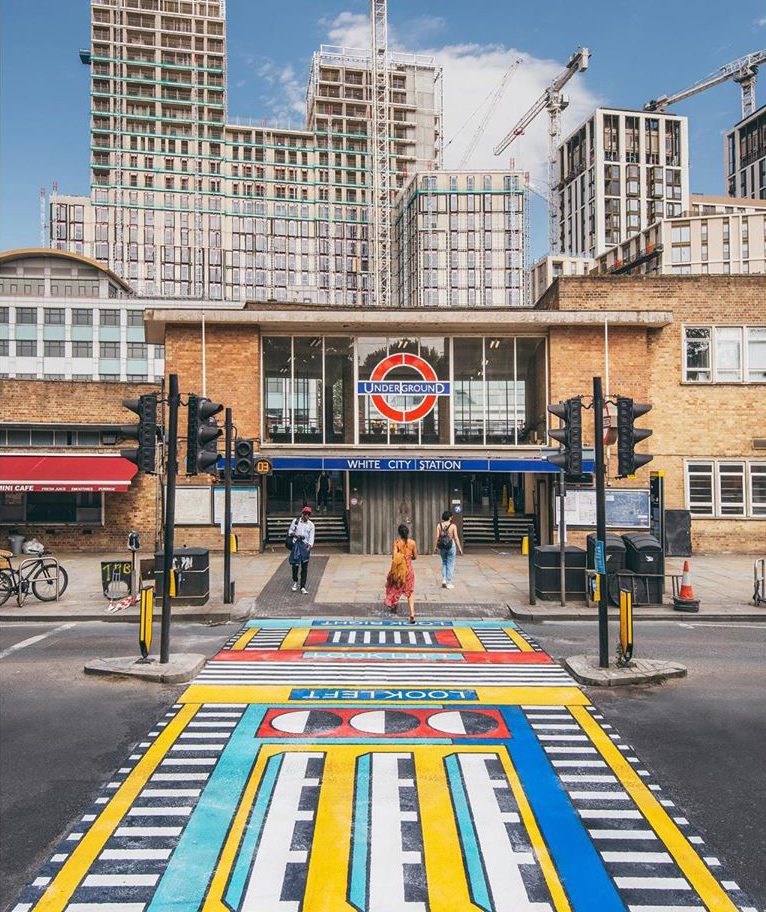 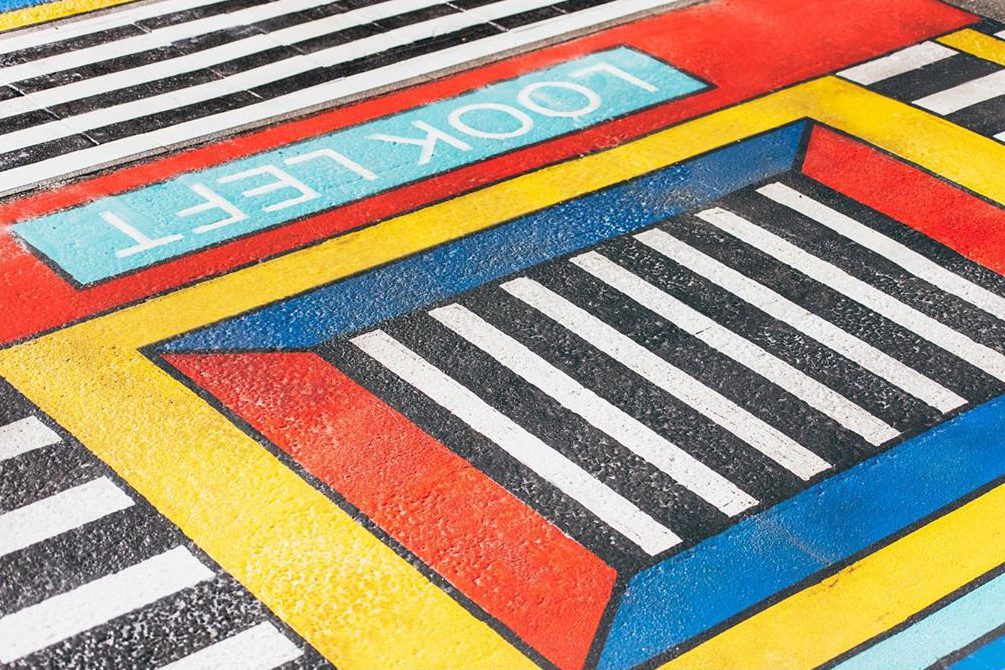 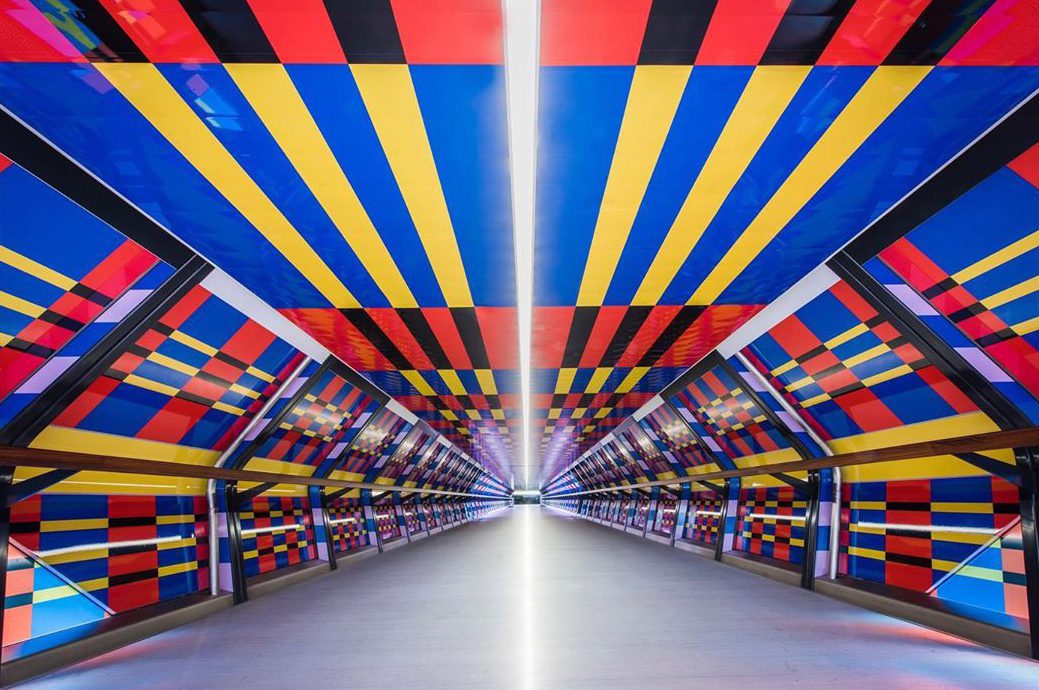 Camille Walala: a pedestrian tunnel and a zebra crossing

This summer French artist based in London Camille Walala arrives with a double bill. It was this August, during the London Mural Festival, which started in the British capital and is still running (we are still receiving brutal mural and artistic creations through their social networks!), when the work she had been doing at the financial area of Canary Wharf came to light. Commissioned by the district and the festival itself, Walala got to paint Adams Plaza Bridge pedestrian tunnel, that gives access to the pier. Flooded with bright colors and geometric shapes she has completely transformed the experience of those who pass through every day with this site-specific intervention. Also this summer, the French artist finished the intervention on a zebra crossing in London’s White City, located in East London, and commissioned by the same district, with which she has previously worked painting some apartment blocks. 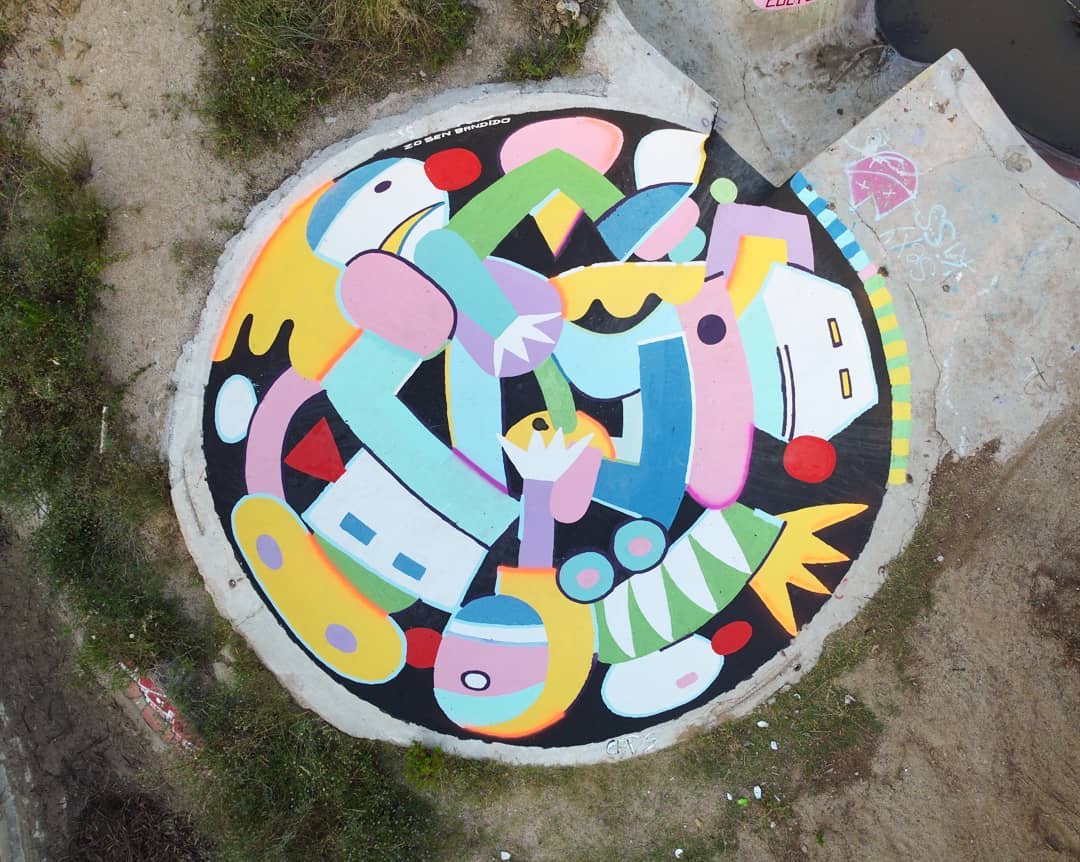 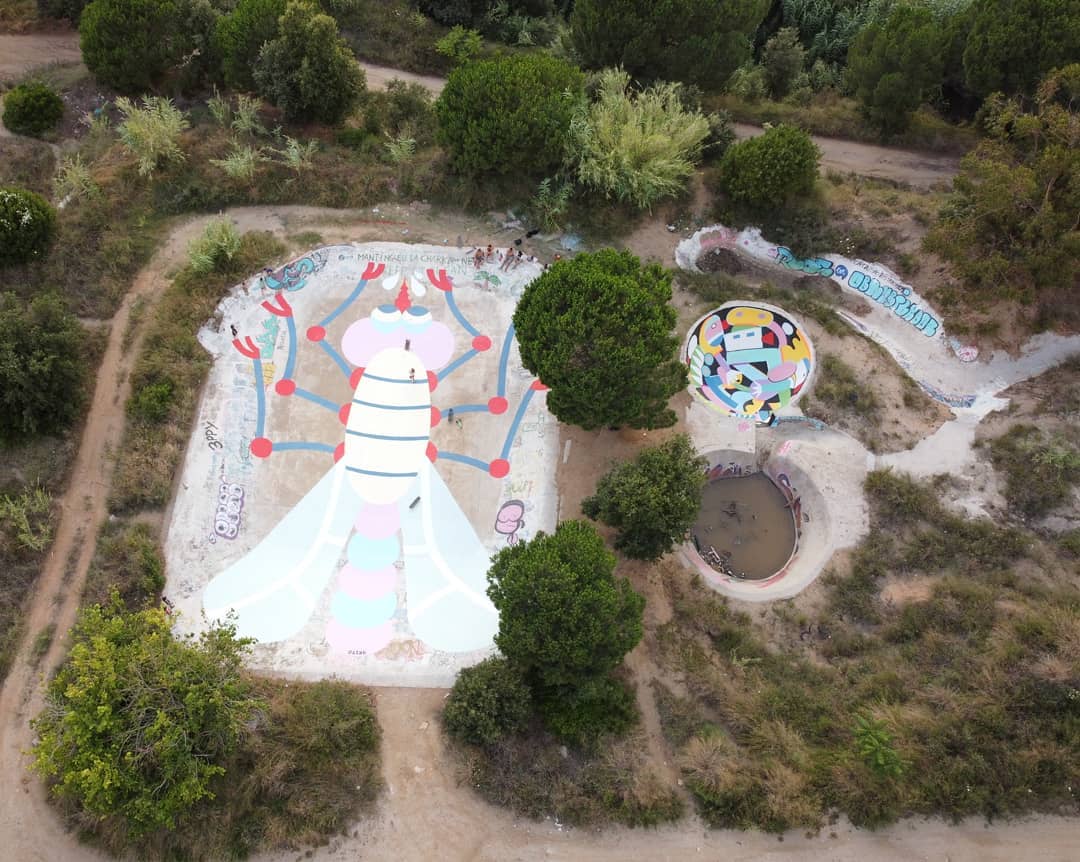 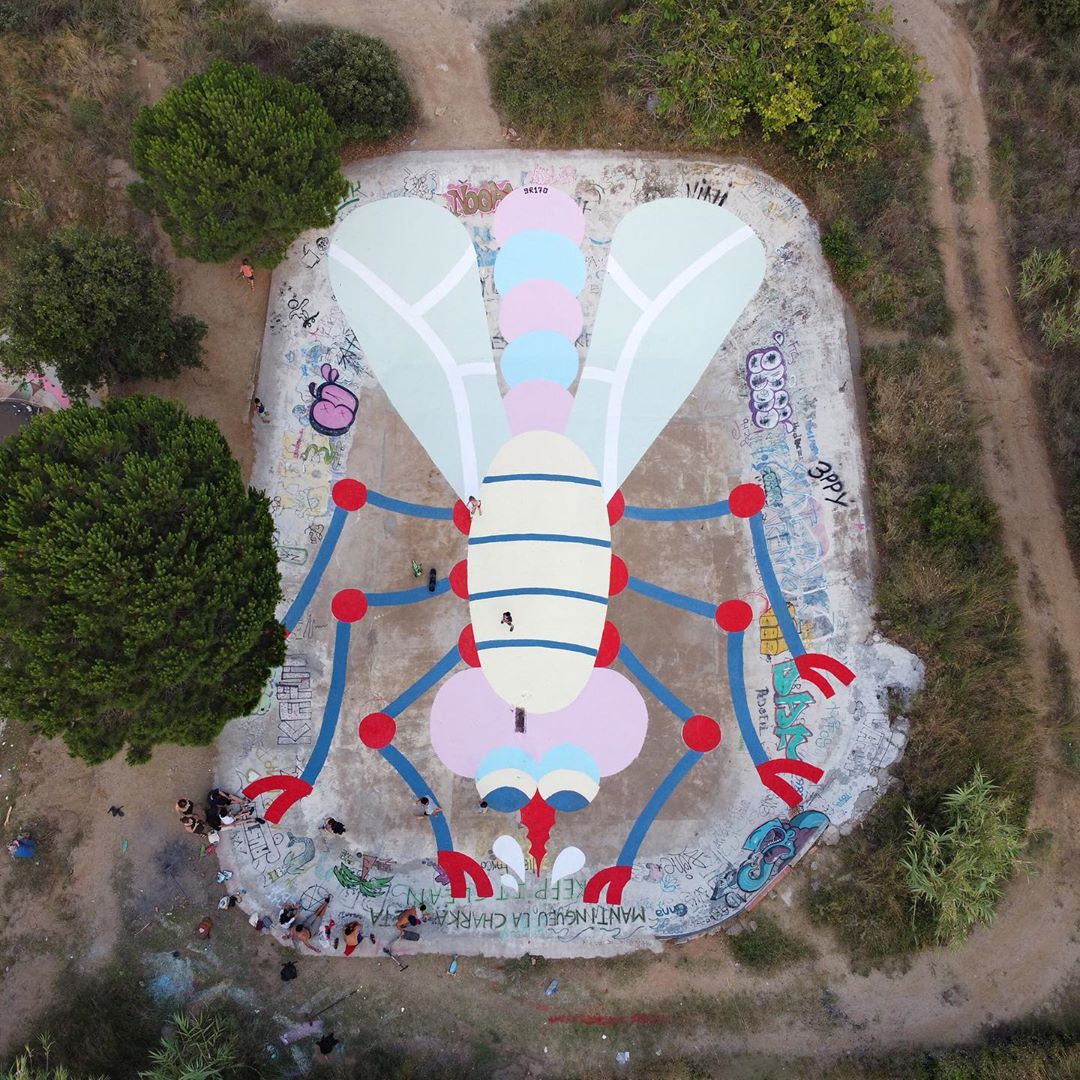 GR170 and Zosen Bandido: a skatepark

Painting the floor of a skatepark is a classic. Graffiti and skate is always a match and we love it. The last one to do so was the Catalan artist GR170 (or Grito) in ‘La Charca’, as the locals call this skatepark in the middle of the mountains and the first one to be built in Spain back in 1978. It was buried for several years until 2012 when it was ‘rediscovered’ by a group of skateboarders who went in its  search. Here is where the first generation of Spanish skateboarders skated, a mythical space and a symbol of the graffiti subculture and self-management. On the big ramp Grito has painted a giant mosquito and next to it, in the smaller bowl, Zosen Bandido has captured his characteristic full color designs. However, to find it you will have to spend some time on research tasks, for now we leave you here a few pictures. 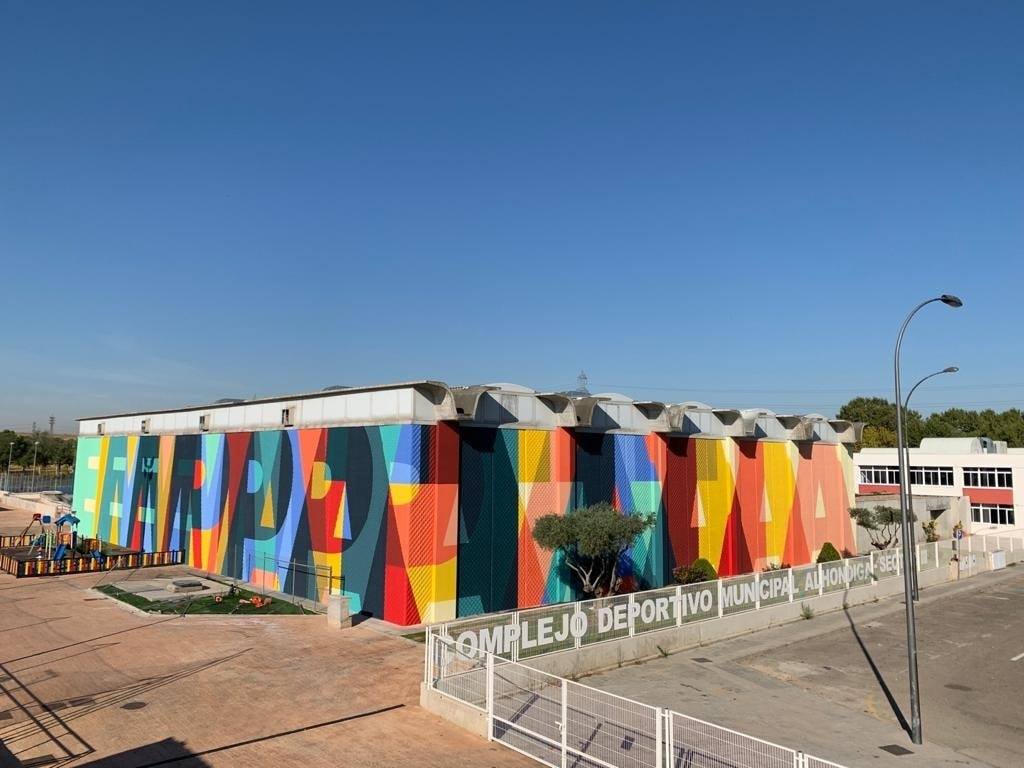 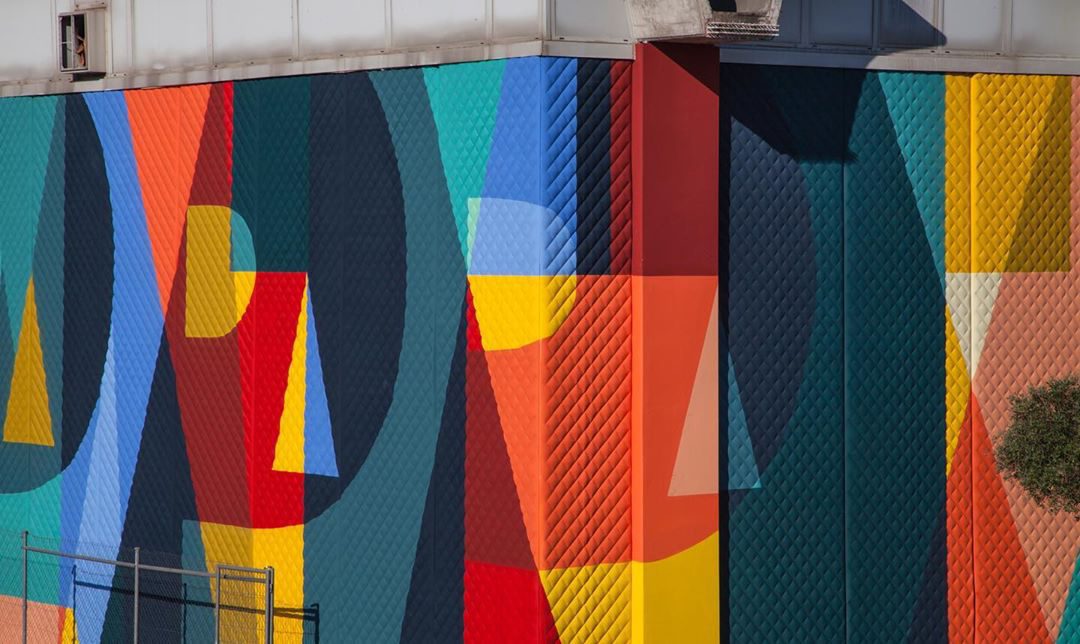 The quartet of artists from Madrid is back on track. This time they have taken over Getafe’s sports center La Alhóndiga, a unique building designed by the architect Miguel Fisac, within the framework of the festival of Cultura Inquieta. Empathy is the word they have chosen this time to overlap between letters and colors. «This project was born in times of the pandemic, conceived during the confinement and materialized in this new and strange normality», says Boa Mistura. «Empathy (Empatia) is the capacity of the human being to place himself in the emotional situation of the other. To leave our skin to experience indirectly in that of others their feelings and perceptions. We have sought to make a universal work, as universal is the situation we live», they conclude. 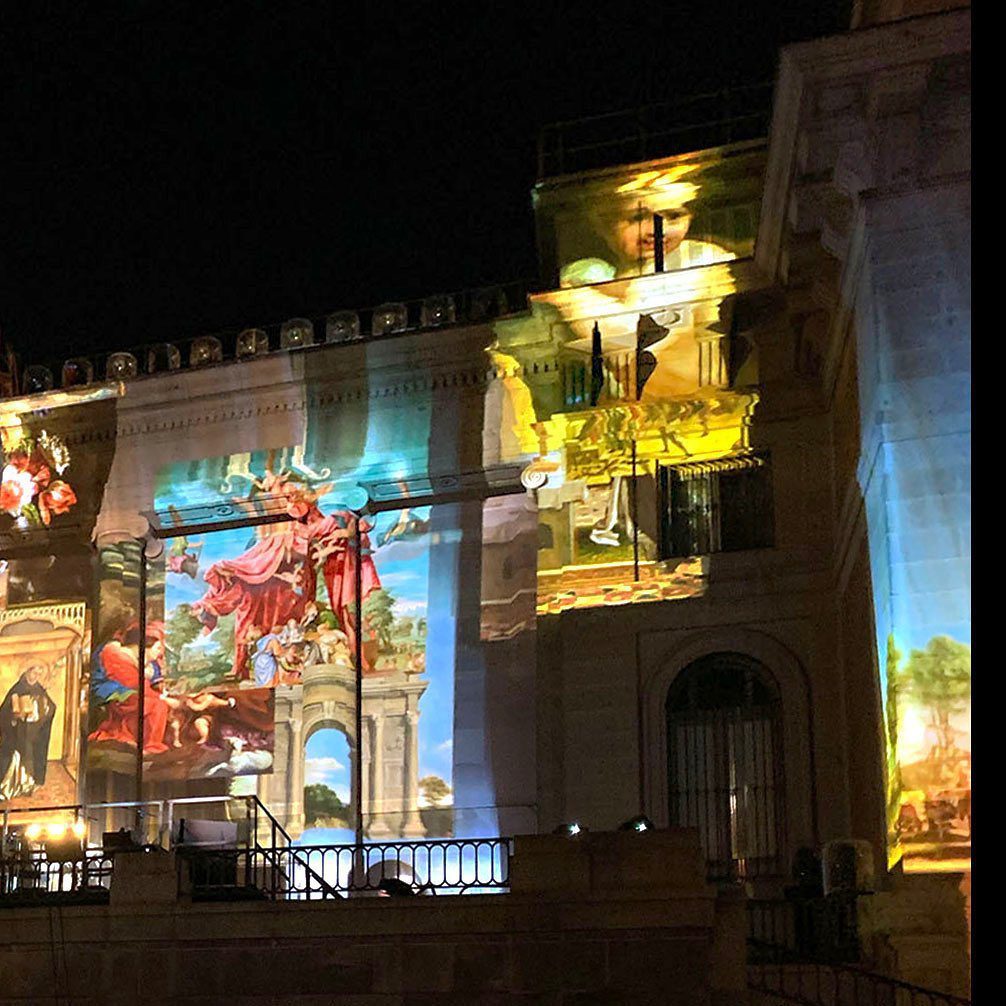 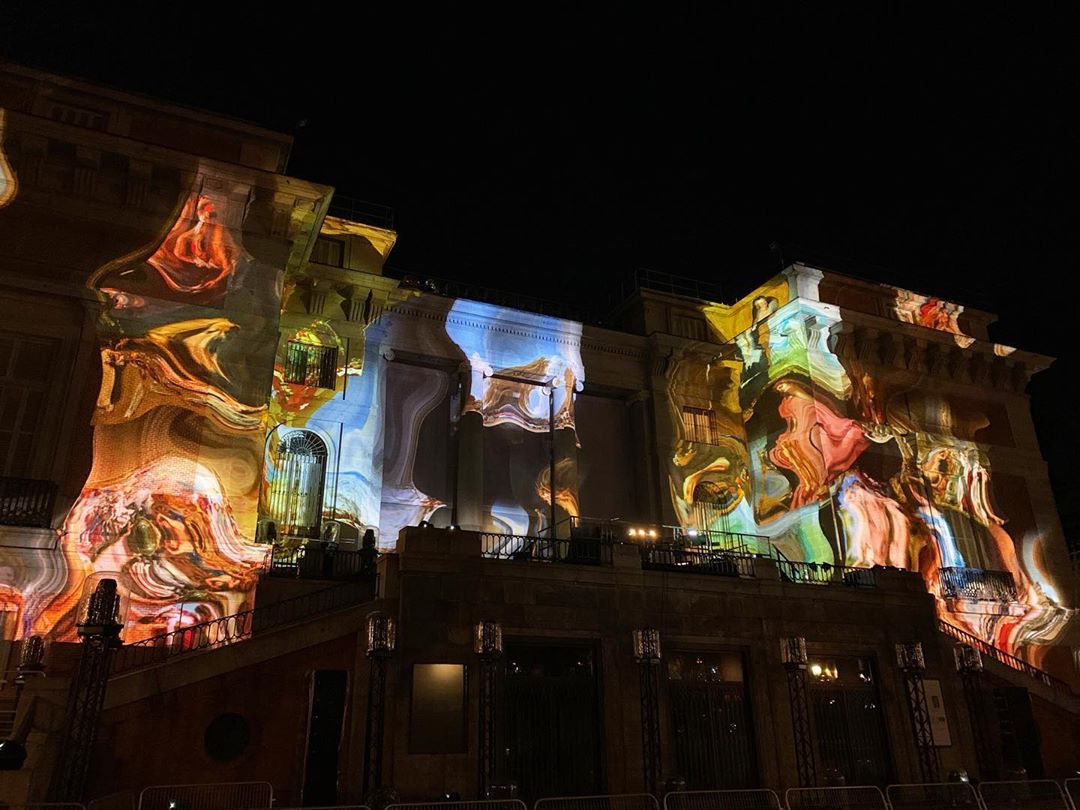 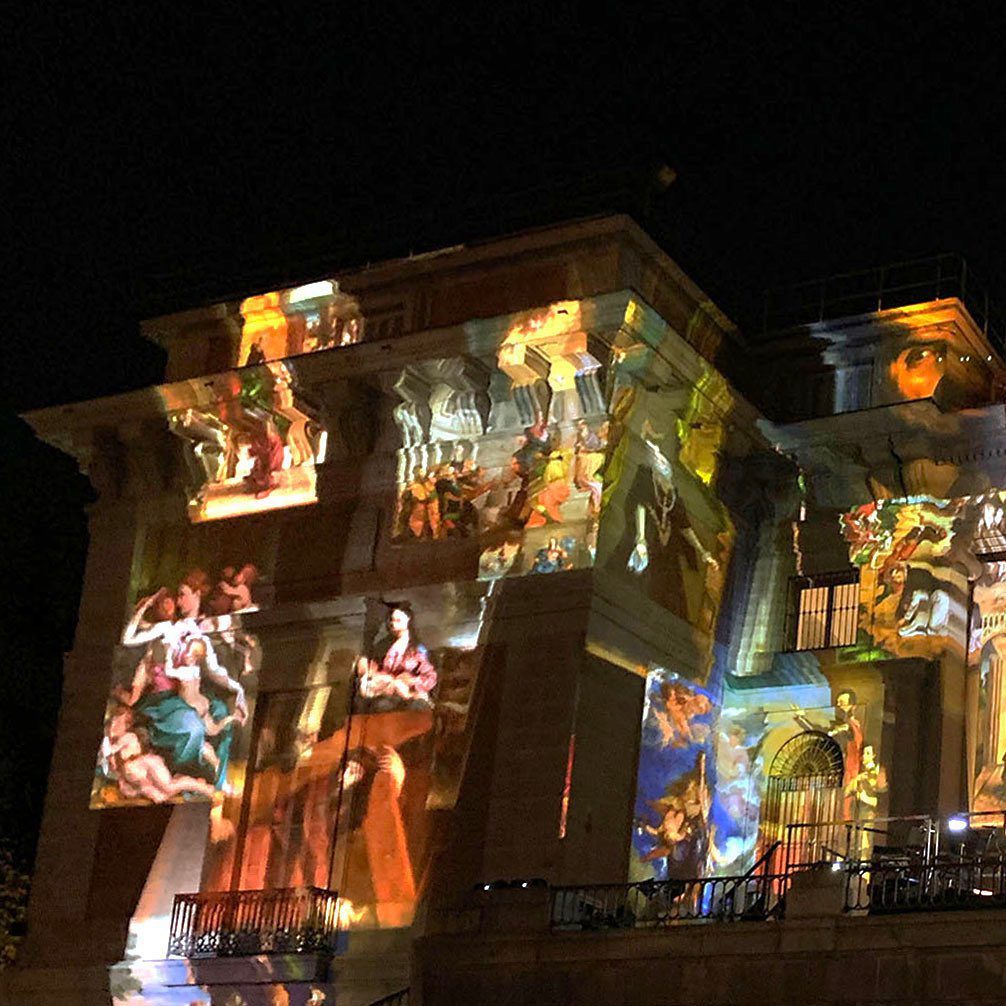 What better than an art museum for artists to appropriate it. So that they can fill it with light and creation. This is exactly what the contemporary Spanish artist specialized in digital art and photography Daniel Canogar (Madrid, 1964) did. With his project ‘Amalgama El Prado’ the artist said goodbye to the bicentennial of the Prado Museum in Madrid with a video that was reproduced on the facade of the museum itself and that could be seen last December 2019. Through a video installation, Canogar took viewers on a tour through the History of Art by highlighting some of the works inside the museum. Ten minutes of video where the pieces of the great masters were ‘liquefied’ thanks to an algorithm created by the artist’s studio partially abstracting the original works. Although it does not remain permanently, it has remained in our retinas. 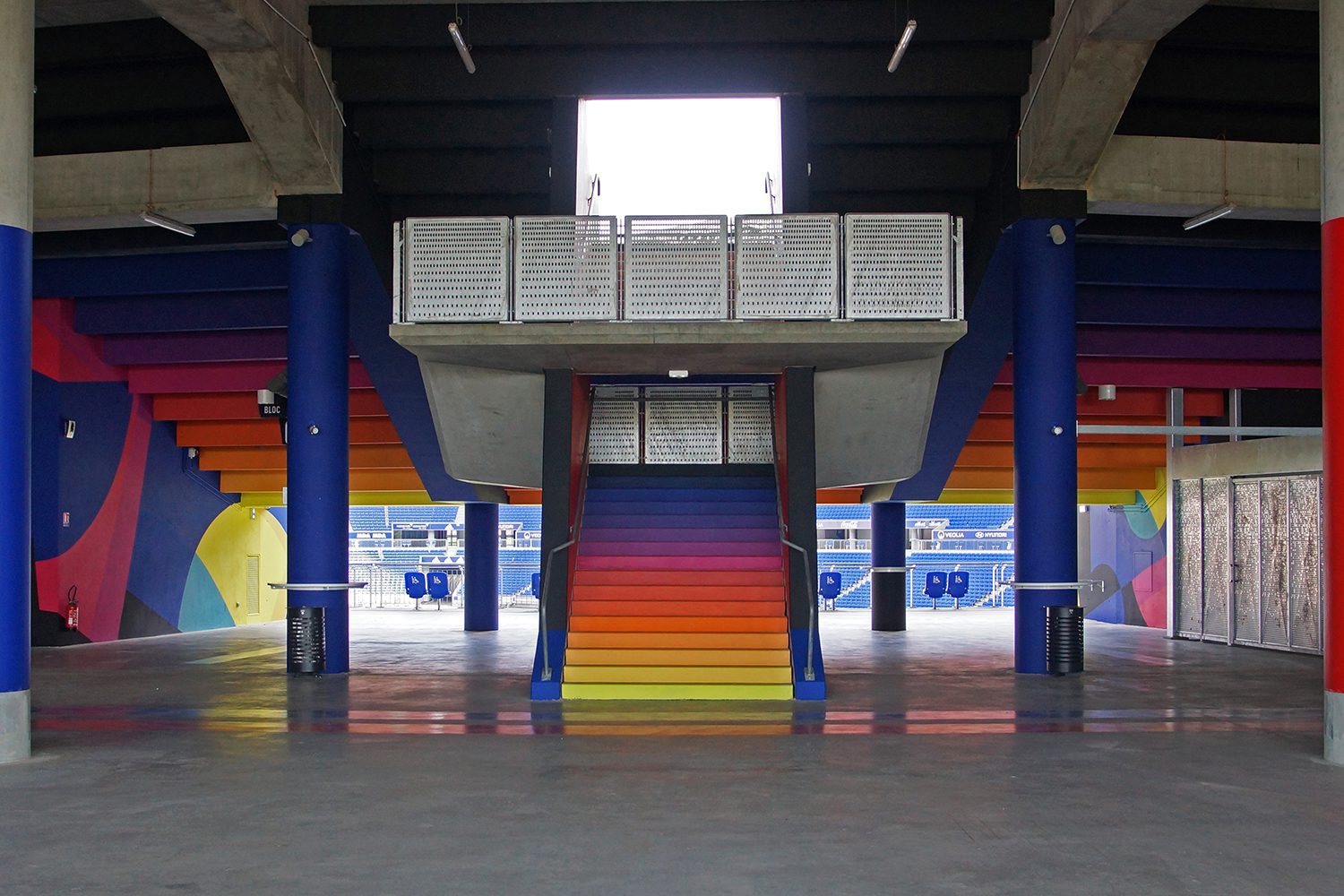 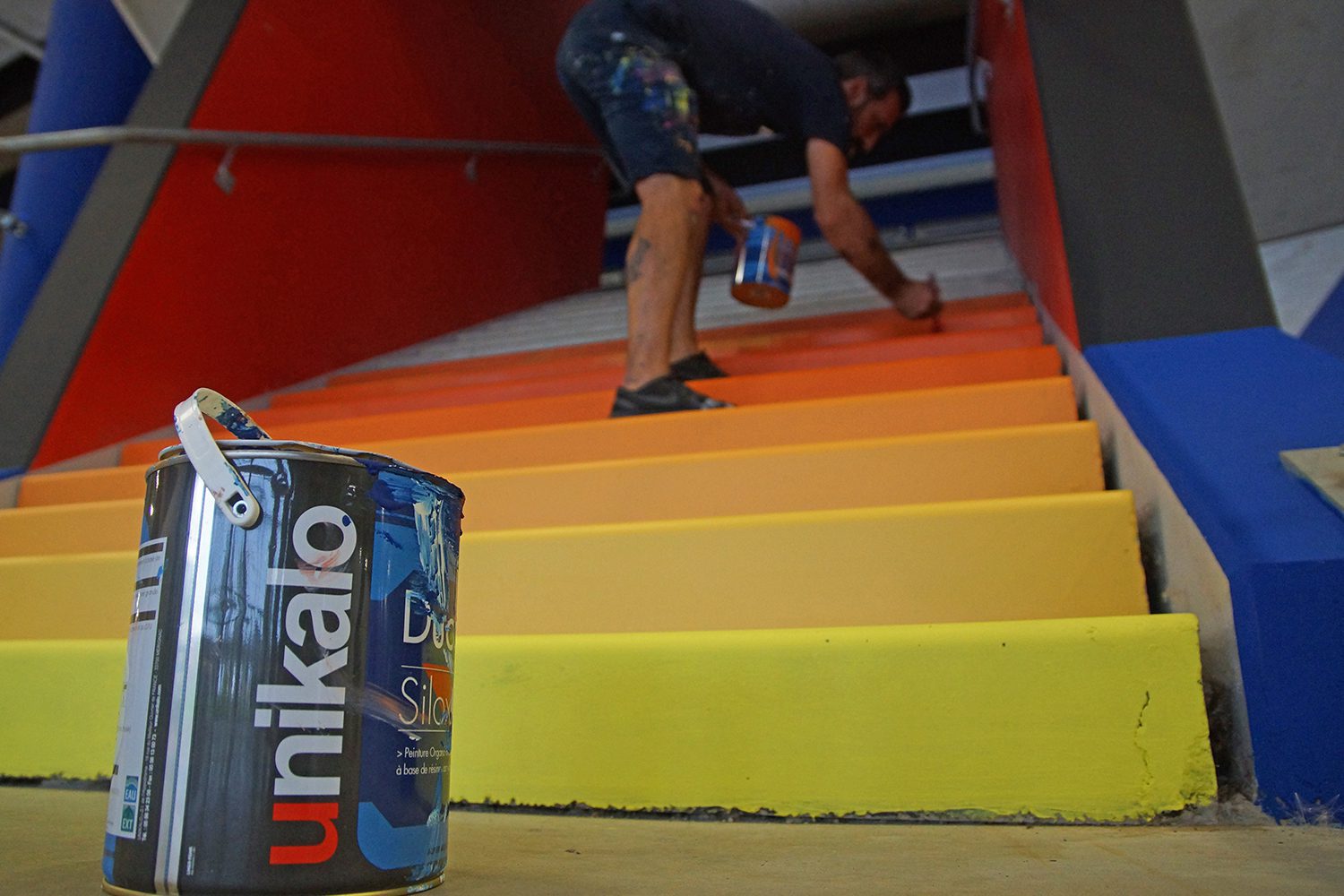 The work of French artist Franck Noto aka Zest (Montpellier, 1980) has taken a substantial turn since its inception, more than 25 years ago, when he started painting graffiti on the streets of his hometown. Graffiti understood not as a form of vandalism, but as a design-oriented expression and a self-discharge in its purest sense. He went from years experimenting on the street as a graffiti writer to developing a figurative mural and studio work that soon transformed into abstraction using figures loaded with energy, movement and color. This led him to work around the world painting large scale walls and this time the Lyon soccer team commissioned this piece of art that creates a direct link between street art and the public that attends to see each game through the colors that are changing gradually challenging the energy of the place and providing a shot of positivism for those who go to the game. 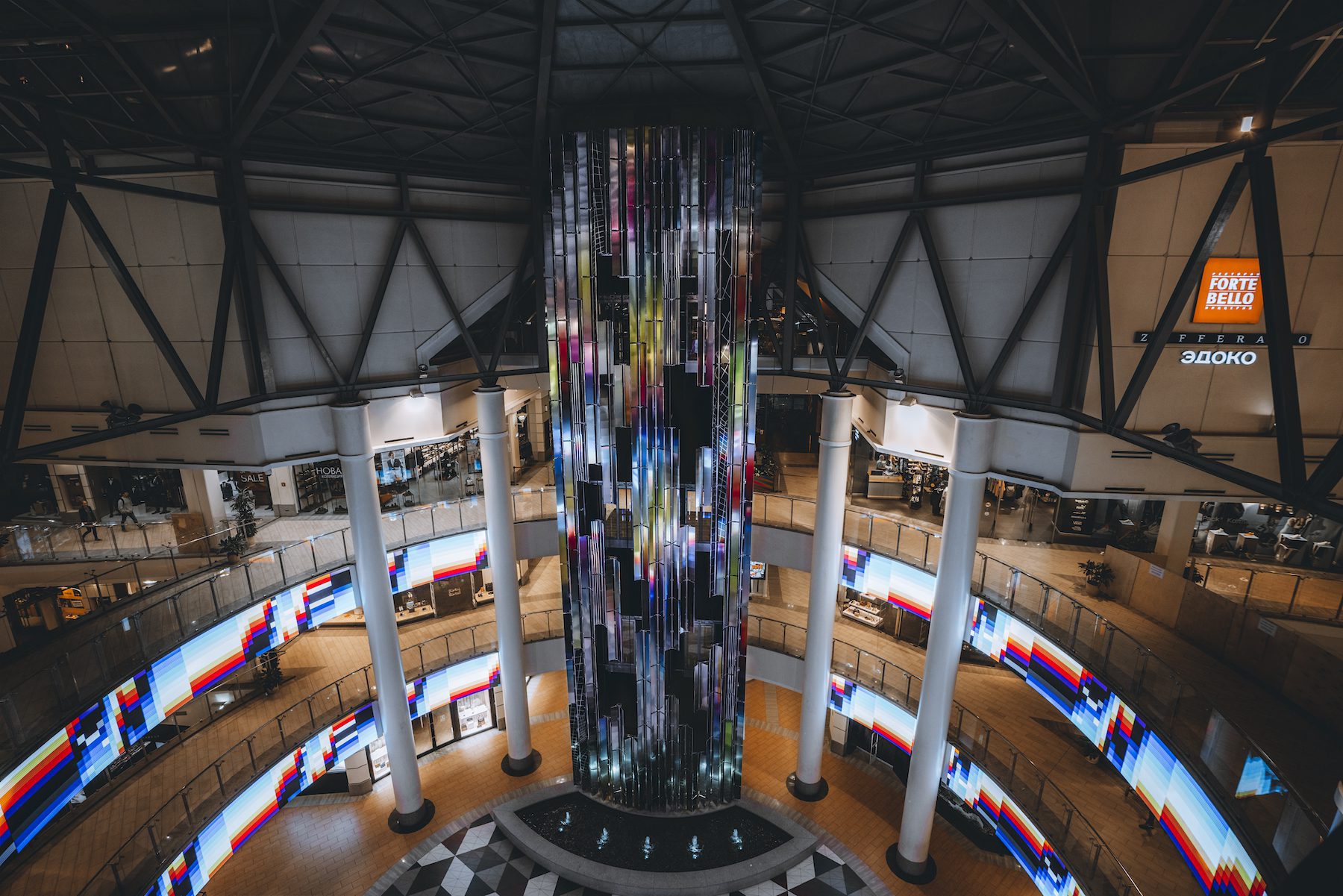 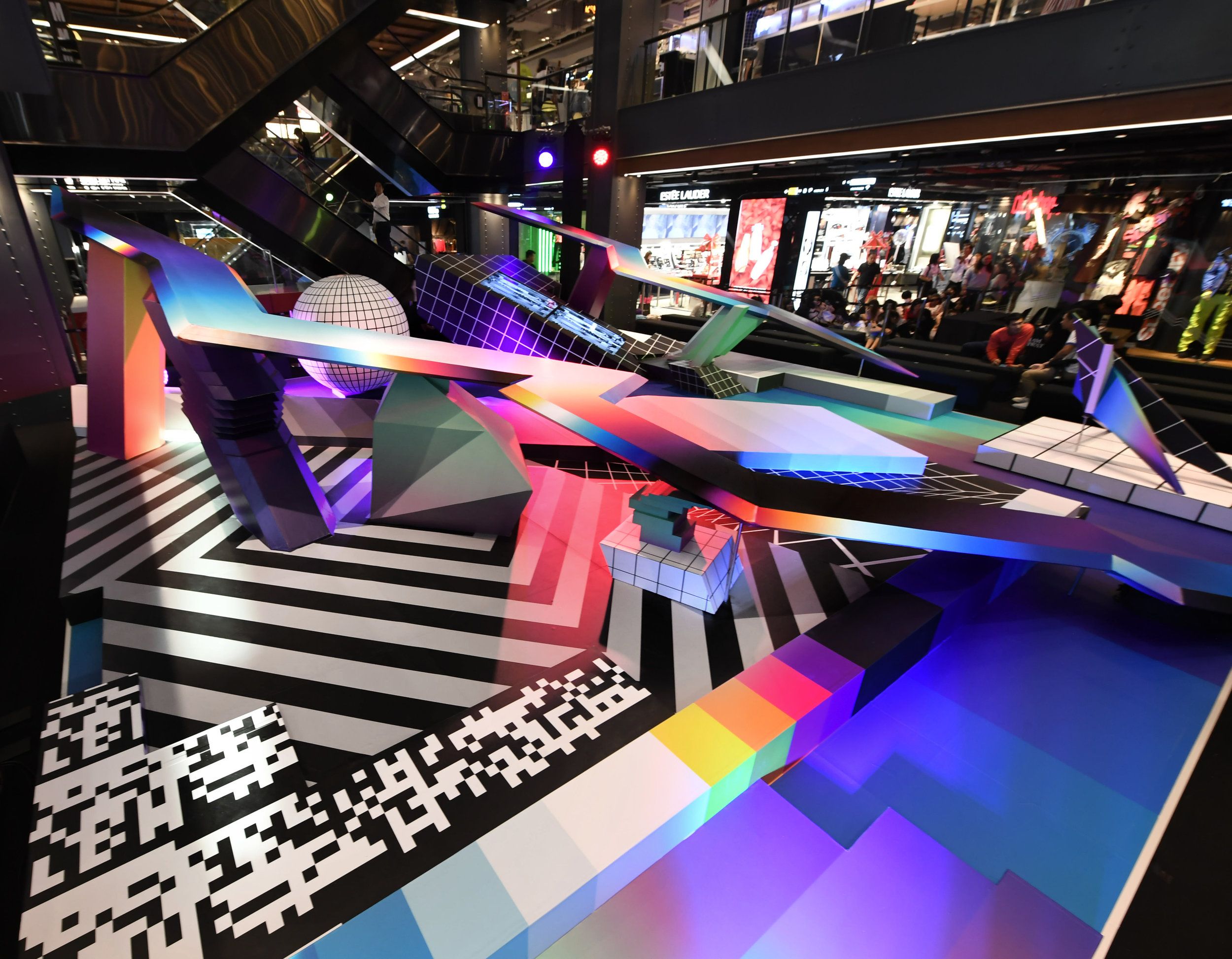 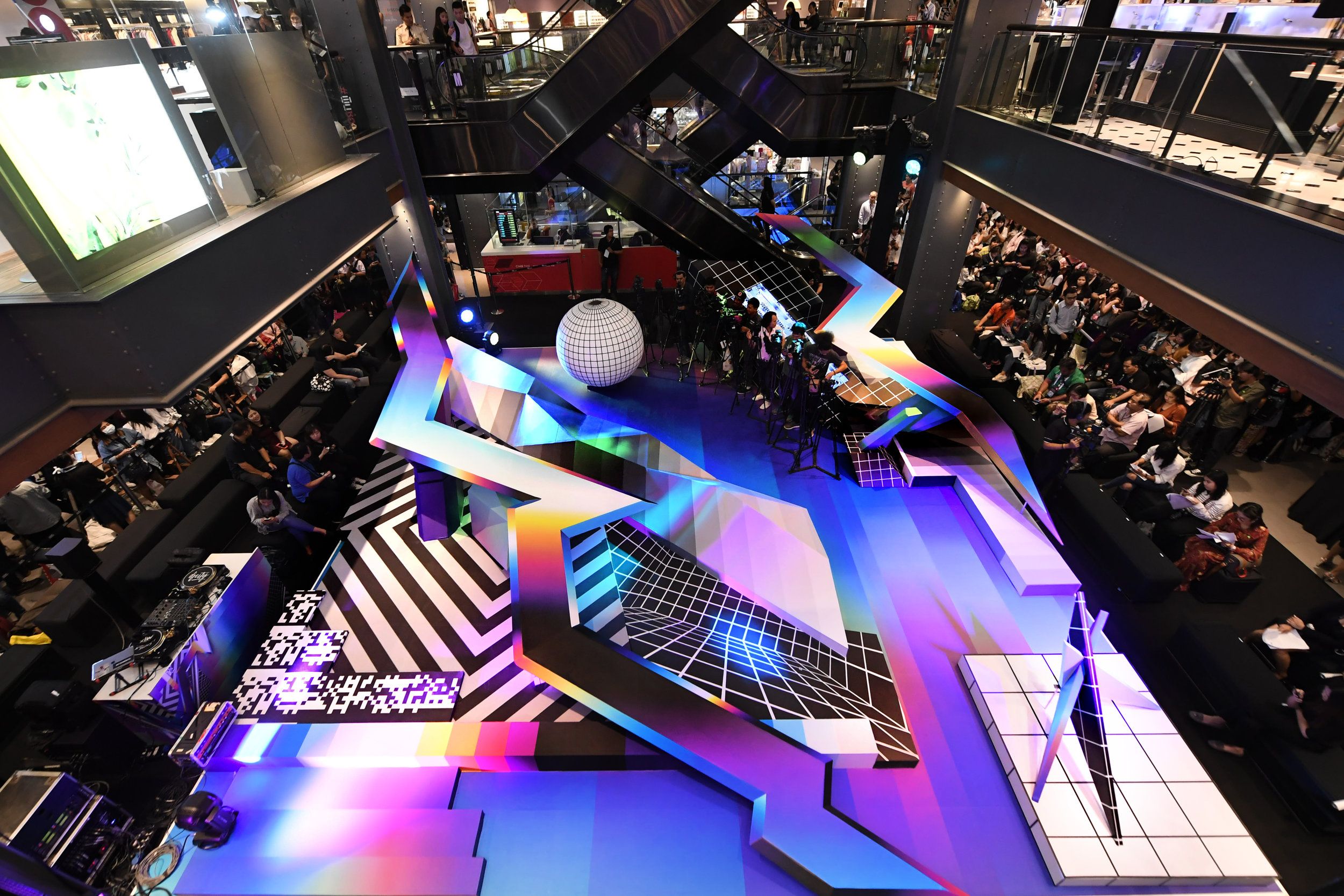 Not one, but two shopping malls were taken over by the Spanish- Argentinian born artist Felipe Pantone, transformed into mega glitches and digital screens with the kinetic and op-art designs of one of the most internationally successful artists, if not the most. It was in 2018 when Pantone placed a spectacular installation in the Atrium shopping center in Moscow in the form of a central digital ‘fountain’ called DATAFALL. In the same year in Bangkok, his designs and geometric figures rose from the ground to create an immersive and three-dimensional space, where he also exhibited his works. 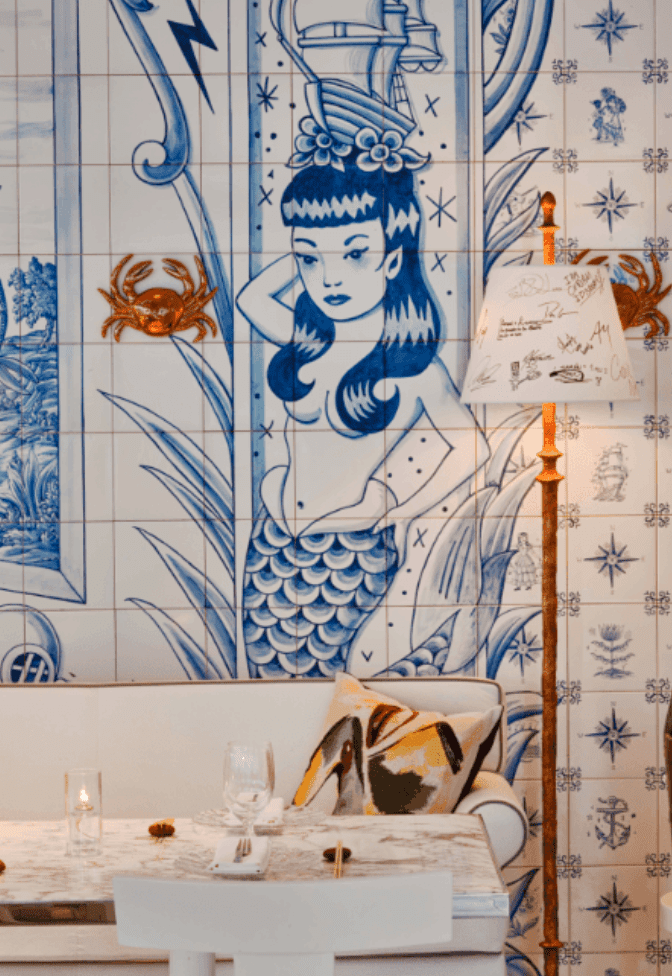 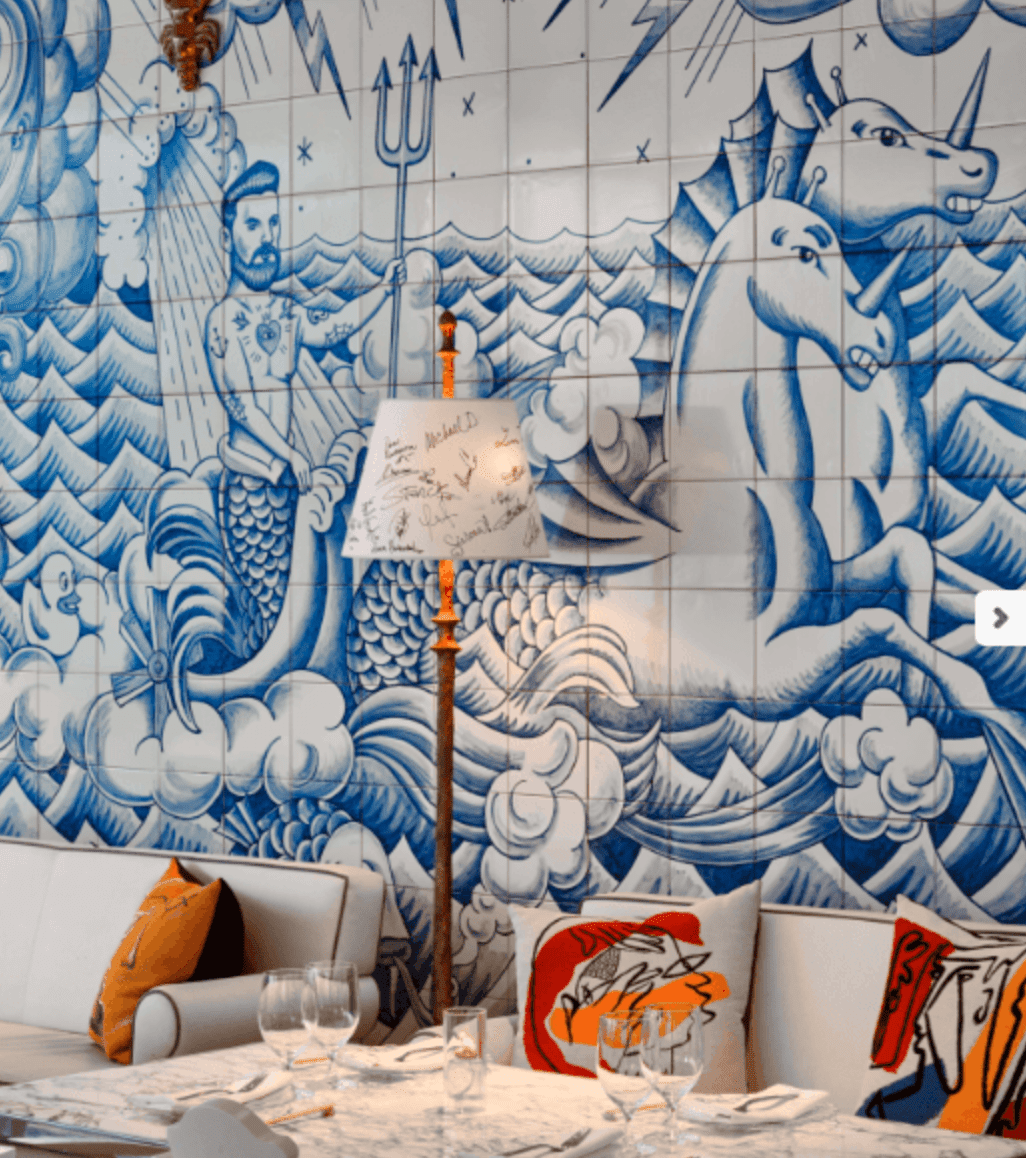 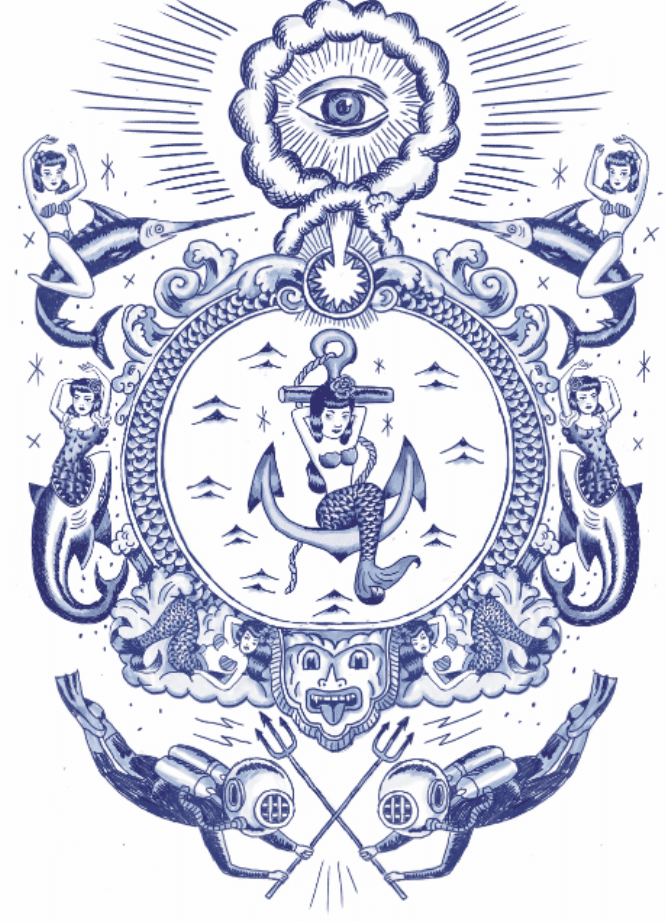 The painter and illustrator Sergio Mora (Barcelona, 1975), belongs to a generation of artists who have taken their artistic creation beyond the canvas. With a whole imaginary created around a magical world (it’s not a coincidence he’s known as MAGICOMORA), the artist, in alliance with Jose Andres, one of the most international Spanish chefs, has intervened his restaurants in Miami and New York with tiles of marine motives and games of mermaids and pirates and hand in hand with the interior designer Philippe Starck. As the chef said about him: «In the kaleidoscopic world of Sergio Mora nothing is what it seems to be. It is a continuous wink in the realm of the impossible». But you don’t have to go that far to enter the artist’s universe of tiles: the tavern El Patio de los Leones, next to the Puerta de Alcalá in Madrid, has also been customized by Mora. 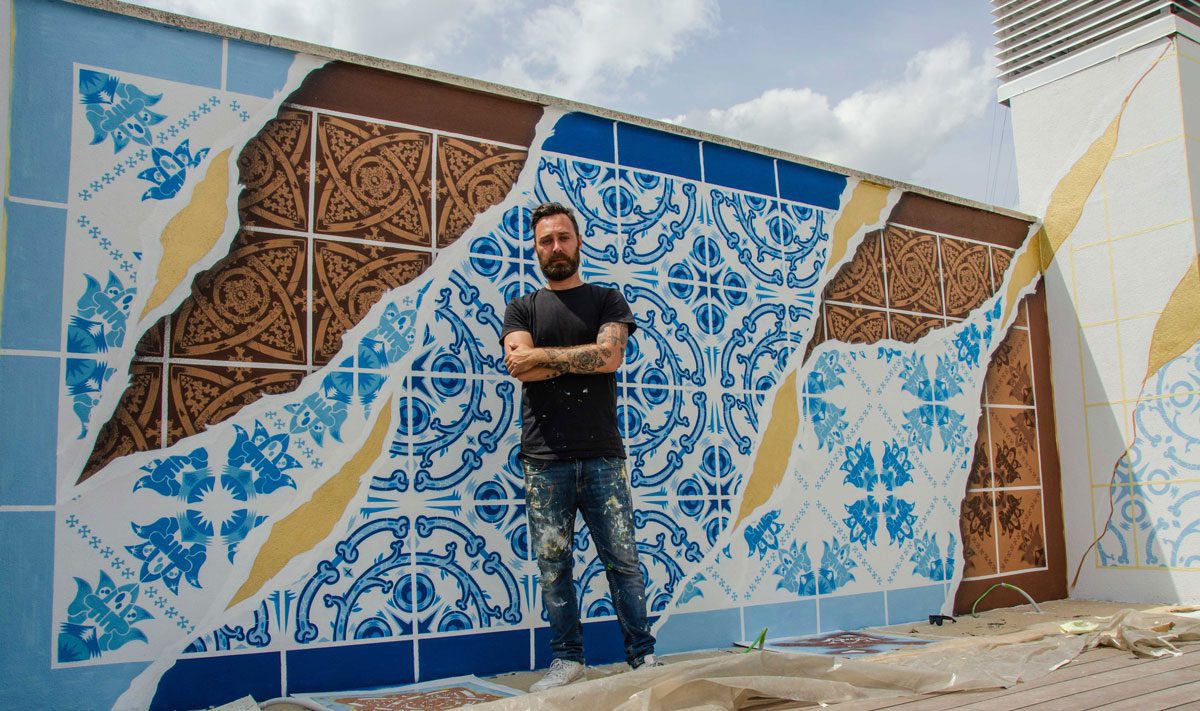 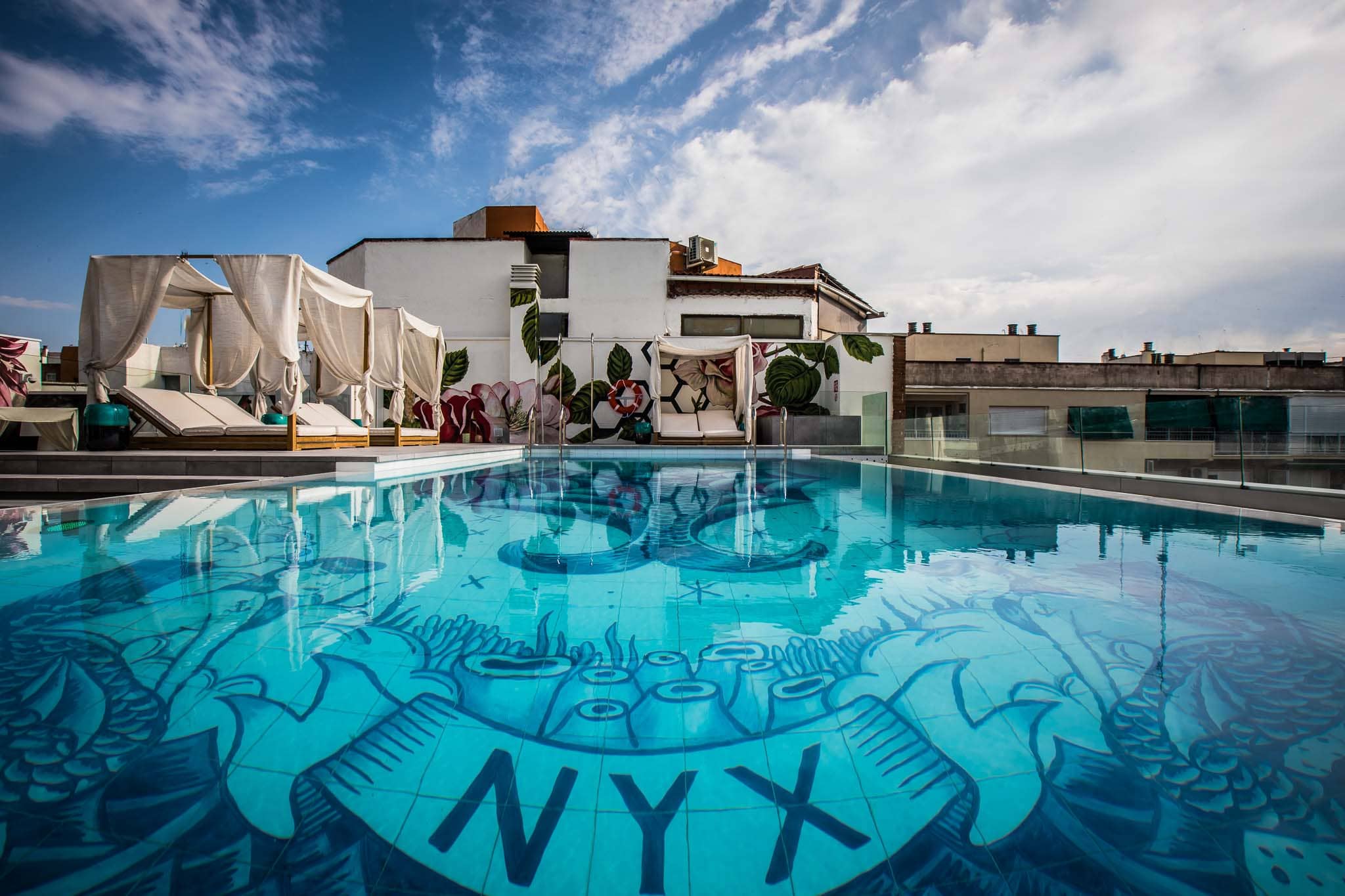 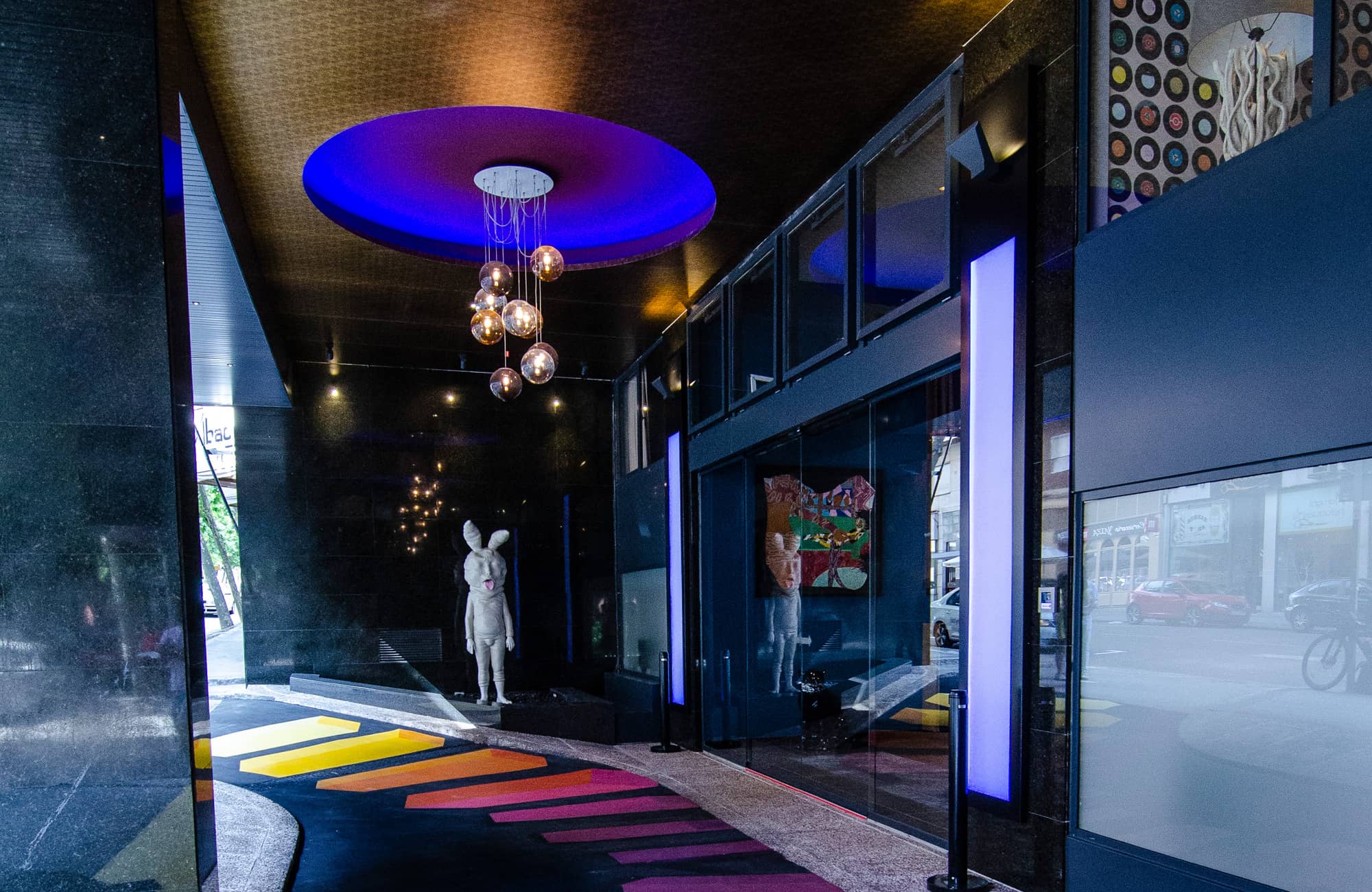 NYX Madrid is not only a hotel, but a gallery of contemporary art installations. A singular space where new artistic languages create a unique environment: urban art with an extra attention around emerging artists. This project, curated by Urvanity Projects in collaboration with Iris Barak in 2018, brings together a series of site-specific installations and murals by national and international artists such as Add Fuel who painted the walls of the terrace together with Lula Goce, Doa Oa filled the central patio with painted plants, the entrance and reception by E1000, a sculpture by Samuel Salcedo welcomes visitors and the swimming pool with tiles painted (also) by Sergio Mora are some of the artworks that can be seen. Under the motto ‘Please Disturb’ these artists have created works that transform a functional hotel into a creative and innovative space, a ‘museum’ of art open to anyone who pass by. In the same way the hotel NYX of Bilbao summed forces with its capital city ‘companion’ with a curatorship of Basque artists like Iñigo Sesma, Iker Mur0ne, Judas Arrieta or Estela Miguel.