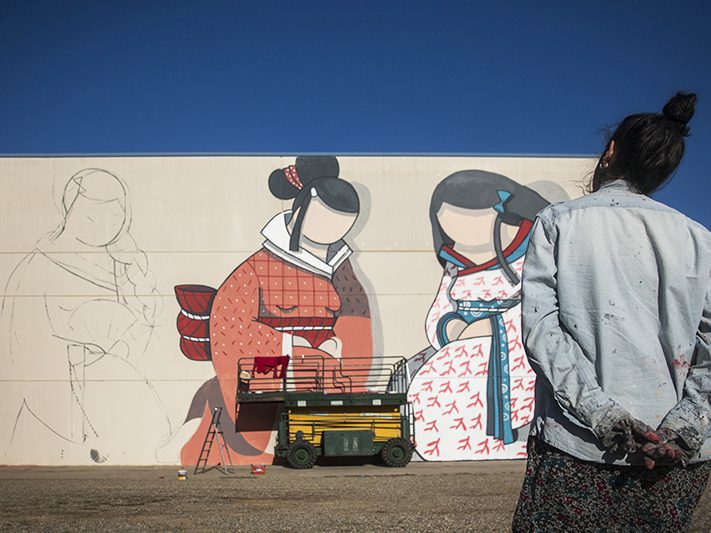 She’s an artist for as long as she can remember, former publicist as an occupational incursion and illustrator as a way of life. And since almost two years ago she’s Ane’s mother. Amaia Arrazola (Vitoria, 1984) paints murals, writes books, illustrates and designs vignettes for magazines or book covers and draws and constructs in the purest DIY style all kinds of original games together with her daughter. She has it all and does it all. Her experience painting in Japan transformed her, and she came back to Spain with a book under her arm. Now she is about to publish her second one: ‘The Meteorite’ (Lunwerg), about her experience as a mother and «how everything flew into pieces», where she ‘undresses’ herself as a woman presenting motherhood with all its pros and cons. We review with her some of her work experiences and dive into her world to get to know the person behind the pencil.

Your first memory painting… I was so young I can’t even remember. I’m the oldest of three sisters and while our parents were on their siesta time we used to paint things as fruits or vegetables that we will sell to each other or even phones make some ‘phone calls’.

The last thing you painted on the street…. It was in Madrid with the guys from Madrid Street Art Project. I did a wall for a new shopping center in Alcorcón specialised in risk sports. 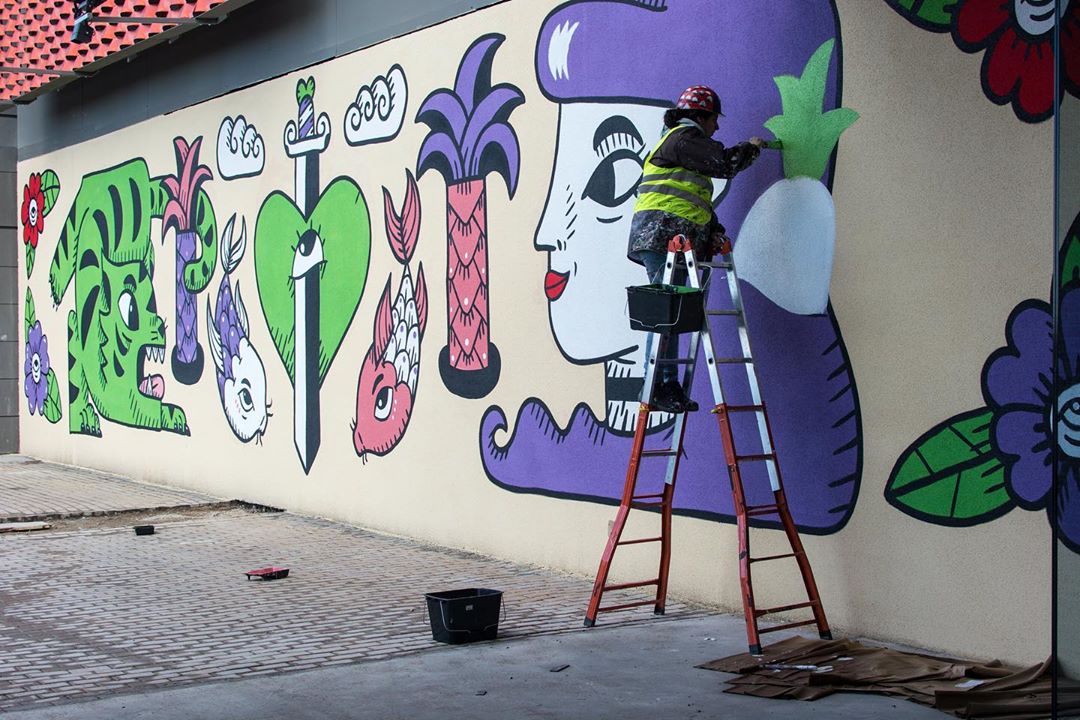 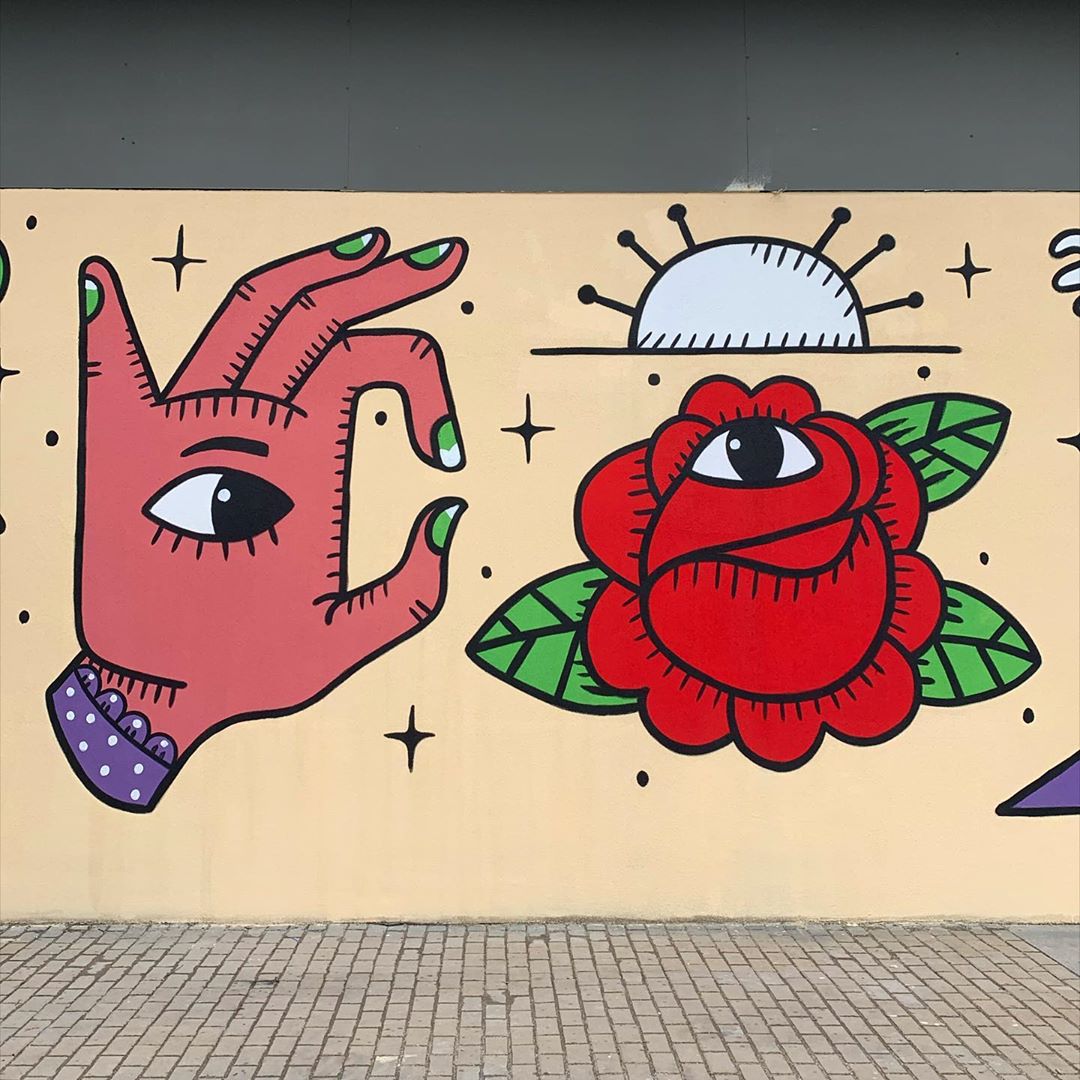 Street or studio work? For me my studio work is something more intimate, I approach it as a personal retreat while the street work is more fun, more expansive… They are complementary and bring me different things.

Your color? I used to always use black and whit and sometimes I used red as a support color, but I think it was because I was scared. Now I’m learning to use all the colors. 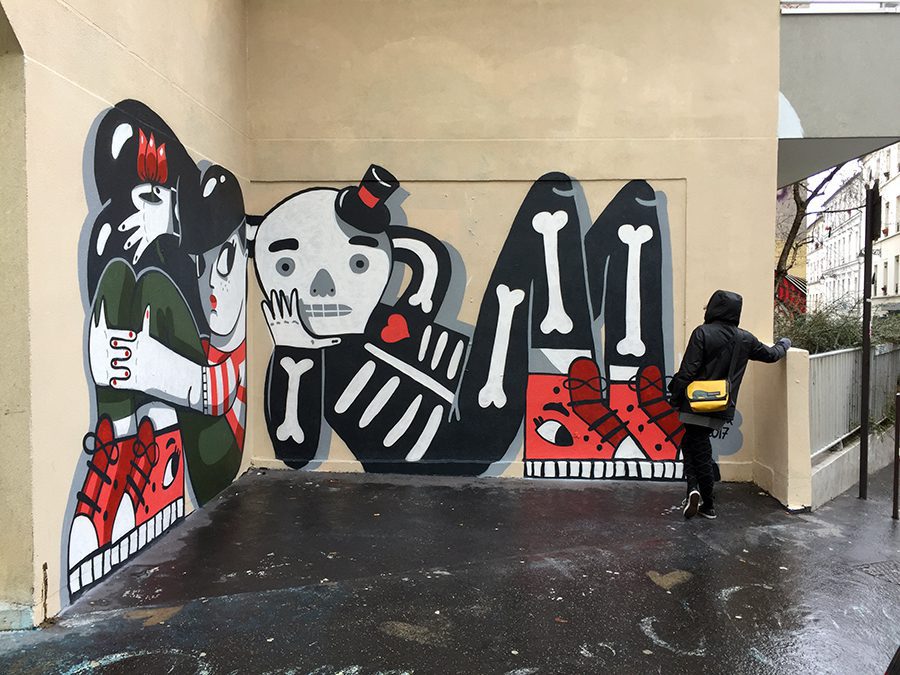 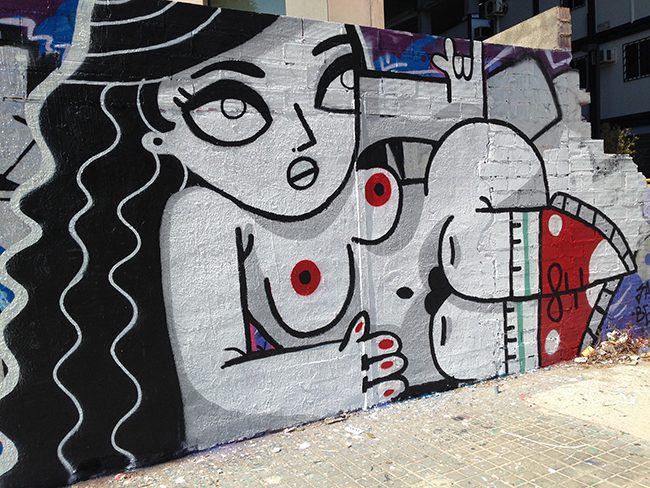 Who would you like to do a collab with? For example with the guys from Twee Muizen, they are Galician and they are also good friends with whom I’ve never done anything together. She makes these brutal masks and they together paint murals. I really like their work.

An artist you admire… Miss Van, because she has managed to stay there in a masculino world and I think that is quite a thing.

The work you’ve enjoyed most? It was a mural I did in Japan in which they gave me all the facilities and materials, you could even leave everything on the street because no one was going to steal it. I had a lot of people helping me, I was able to do it super well and super chill … It was great! 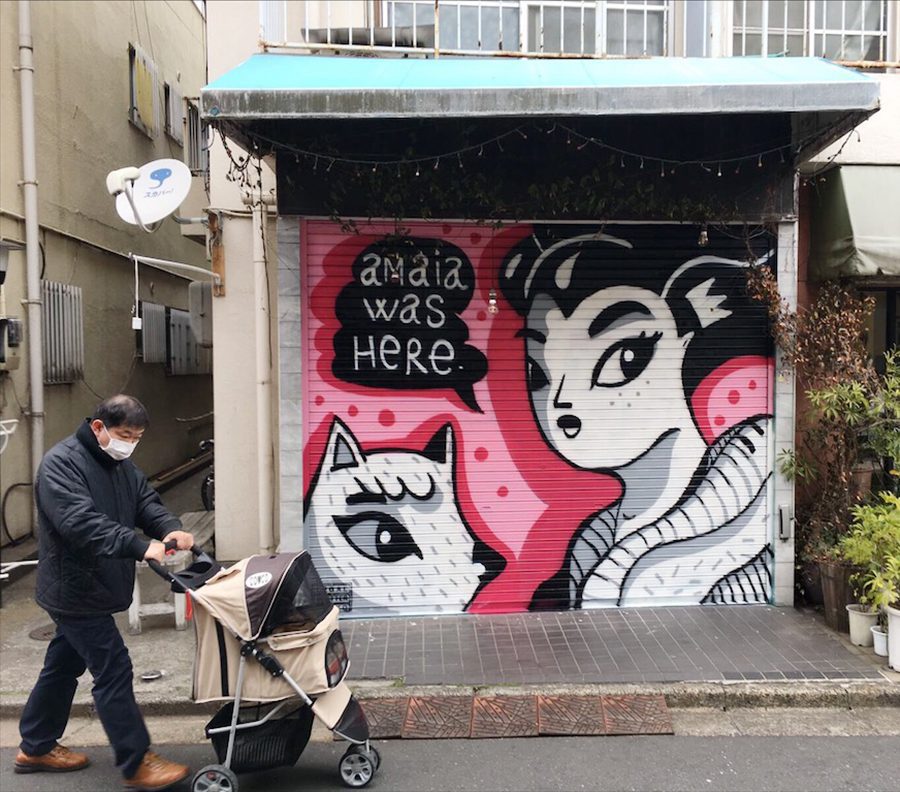 And the one you feel the proudest? It’s not exactly a mural, but a book I made about my experience in Japan. It is called “Wabi Sabi” and I feel very proud to have been able to go there and come back to make a 180-page book.

A turning point in your career? This book without a doubt. I discovered that I could speak, that I had a voice. Before, I limited myself as an illustrator to put images to what others would say. After that work I realized that I had things to say. 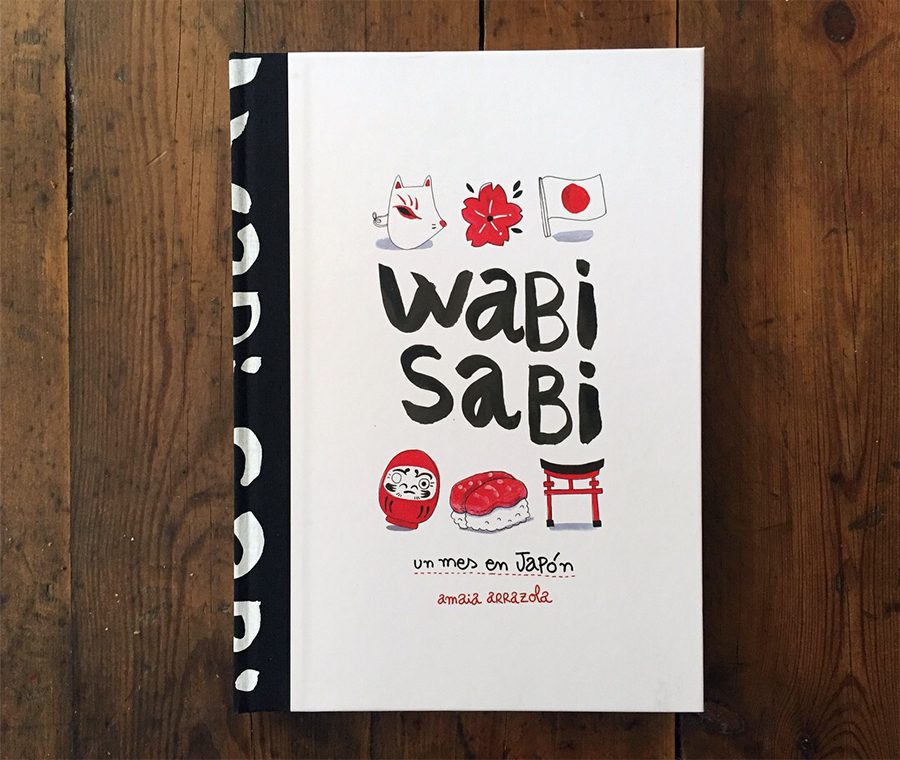 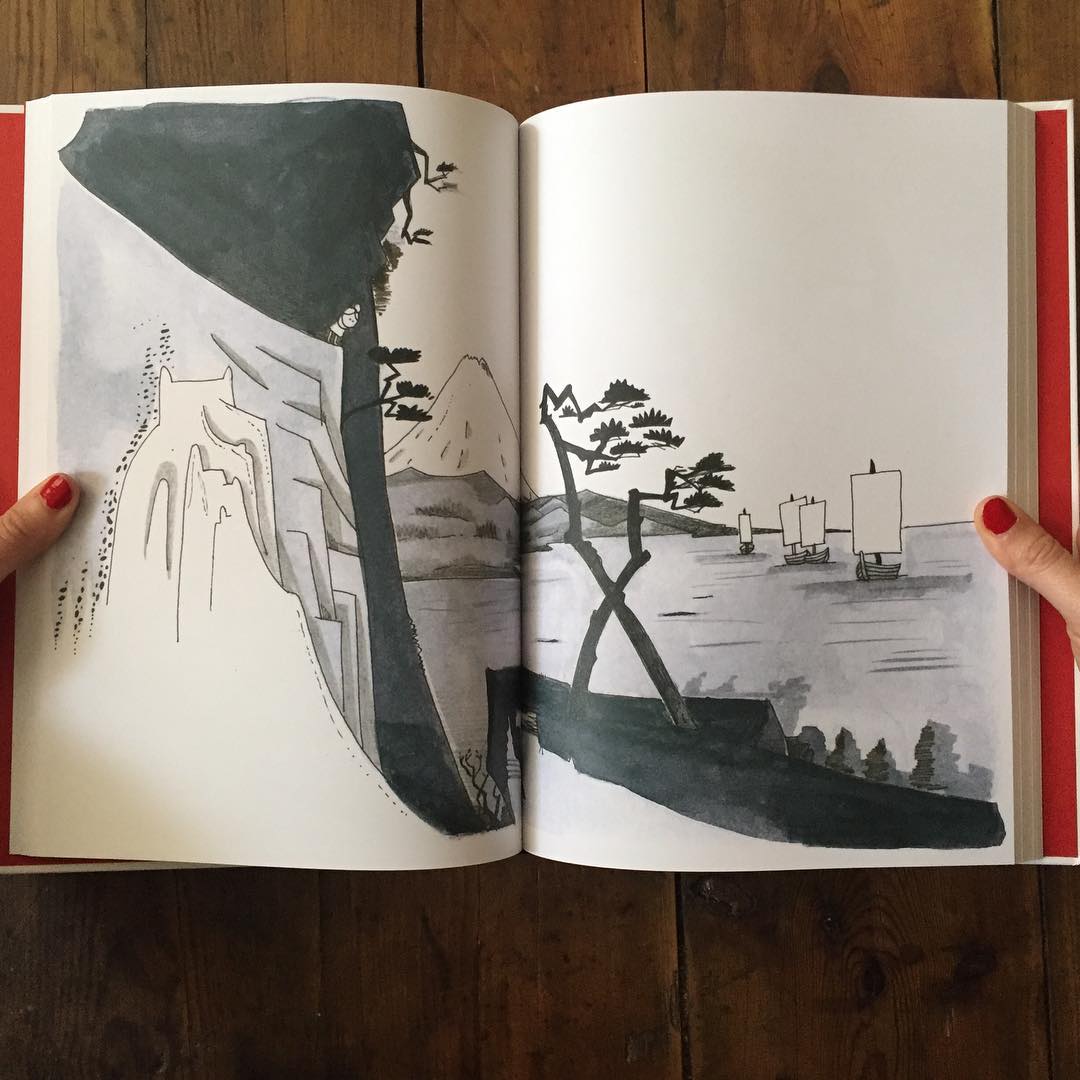 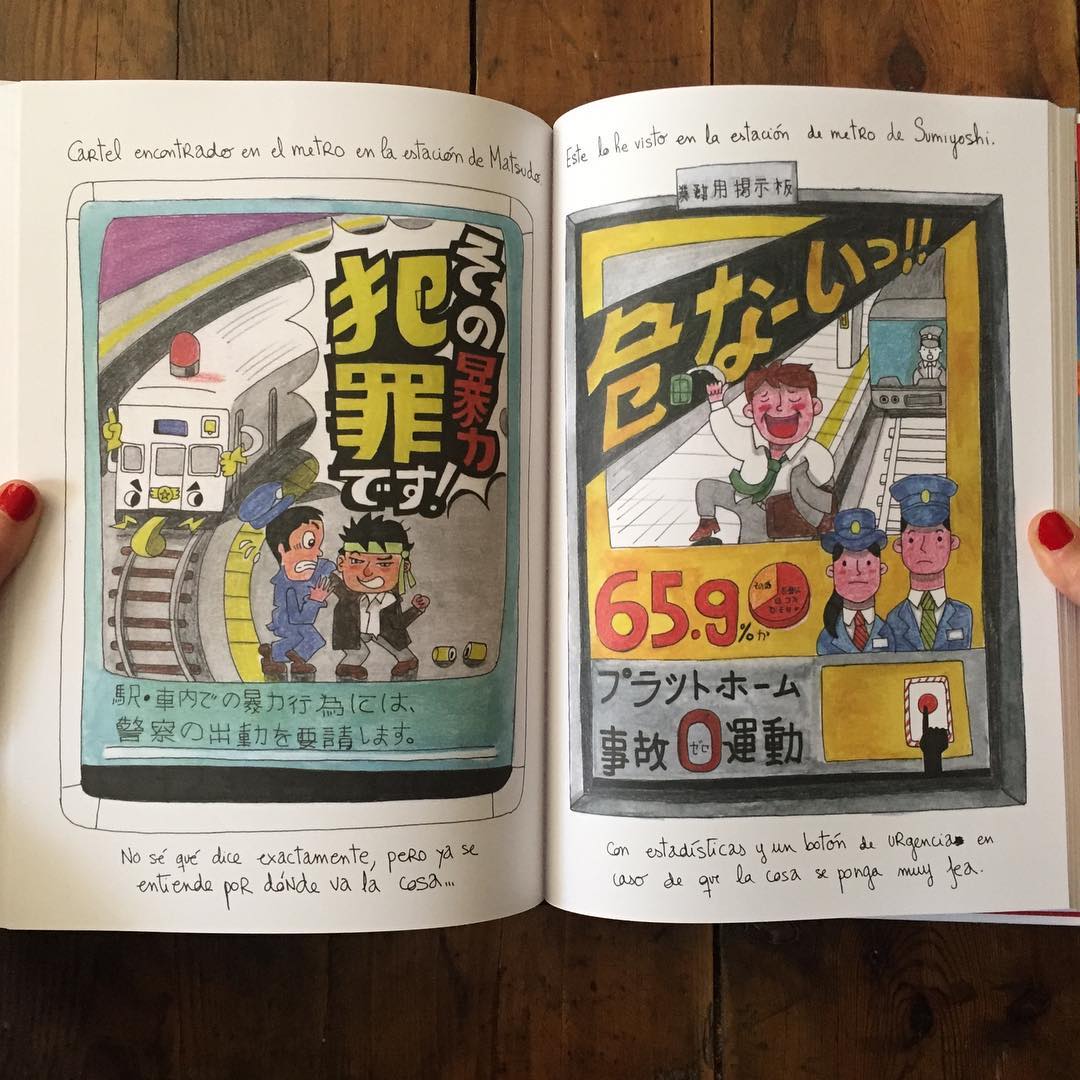 An funny fact at work? While painting in Penellas, a small town in Lleida, I was drawing two girls and every now and then, when a farmer passed by they would say: “Oh, what a rooster! How beautiful the rooster!” And I didn’t know what they were talking about. Now… look at the picture below and the girl’s scrunchie… That’s when I realized that when you paint in the street, people make your mural of their own. 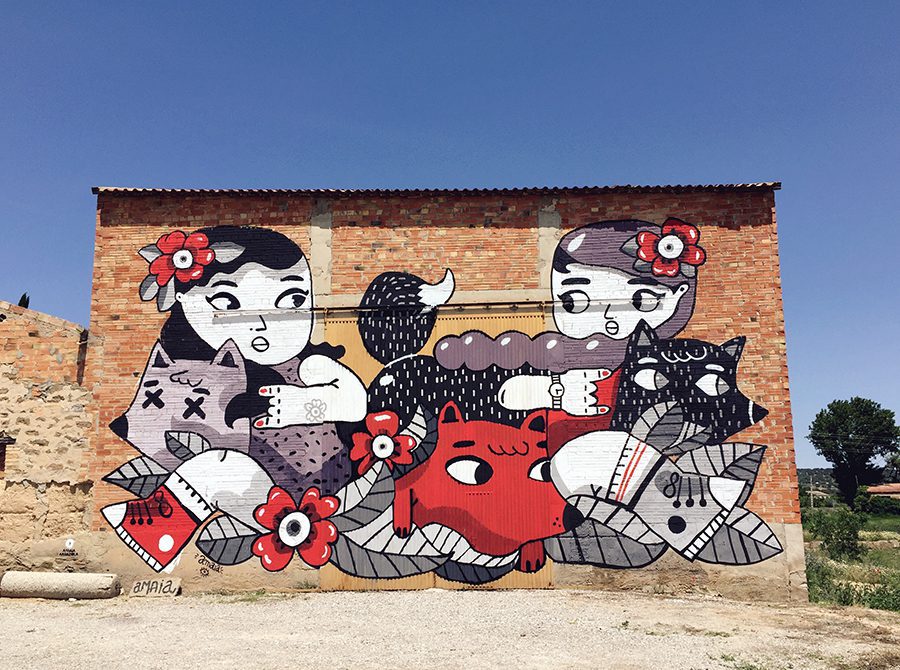 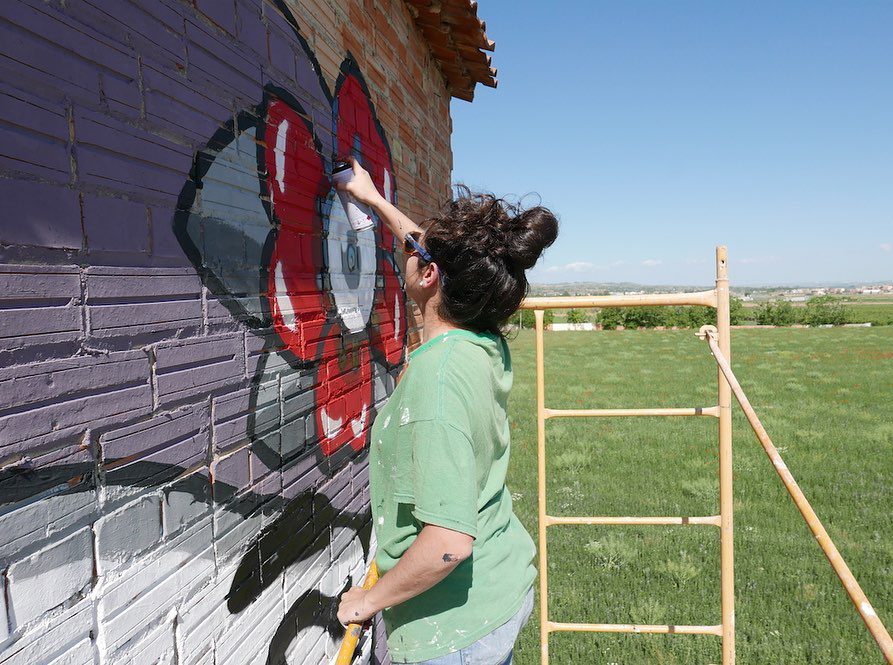 Did you have a mentor? I would say I am quite a self-taught artist, but I have learned from all the people who have surrounded me, from colleagues, from who was my studio partner Conrad, from Txemy who is my life partner, from Marina Capdevila who is a friend… In general, from anyone I’m working with I get something out of it, whether it’s good or bad. 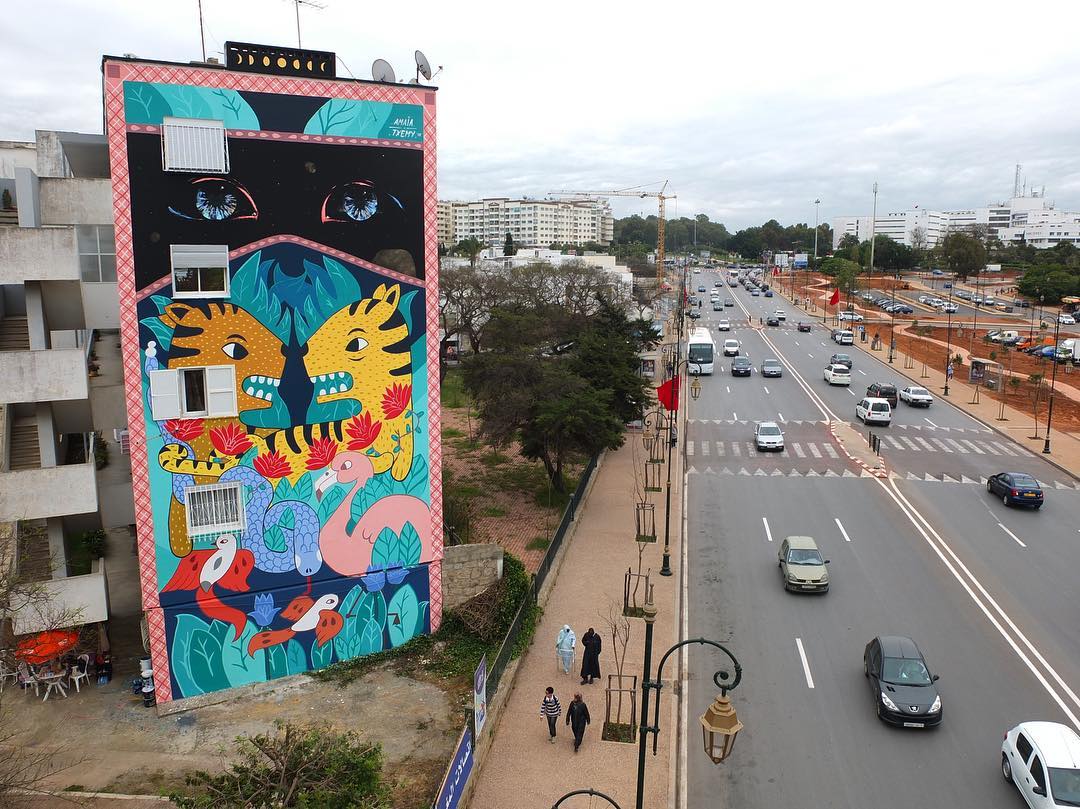 Wall in Rabat with her partner Txemy 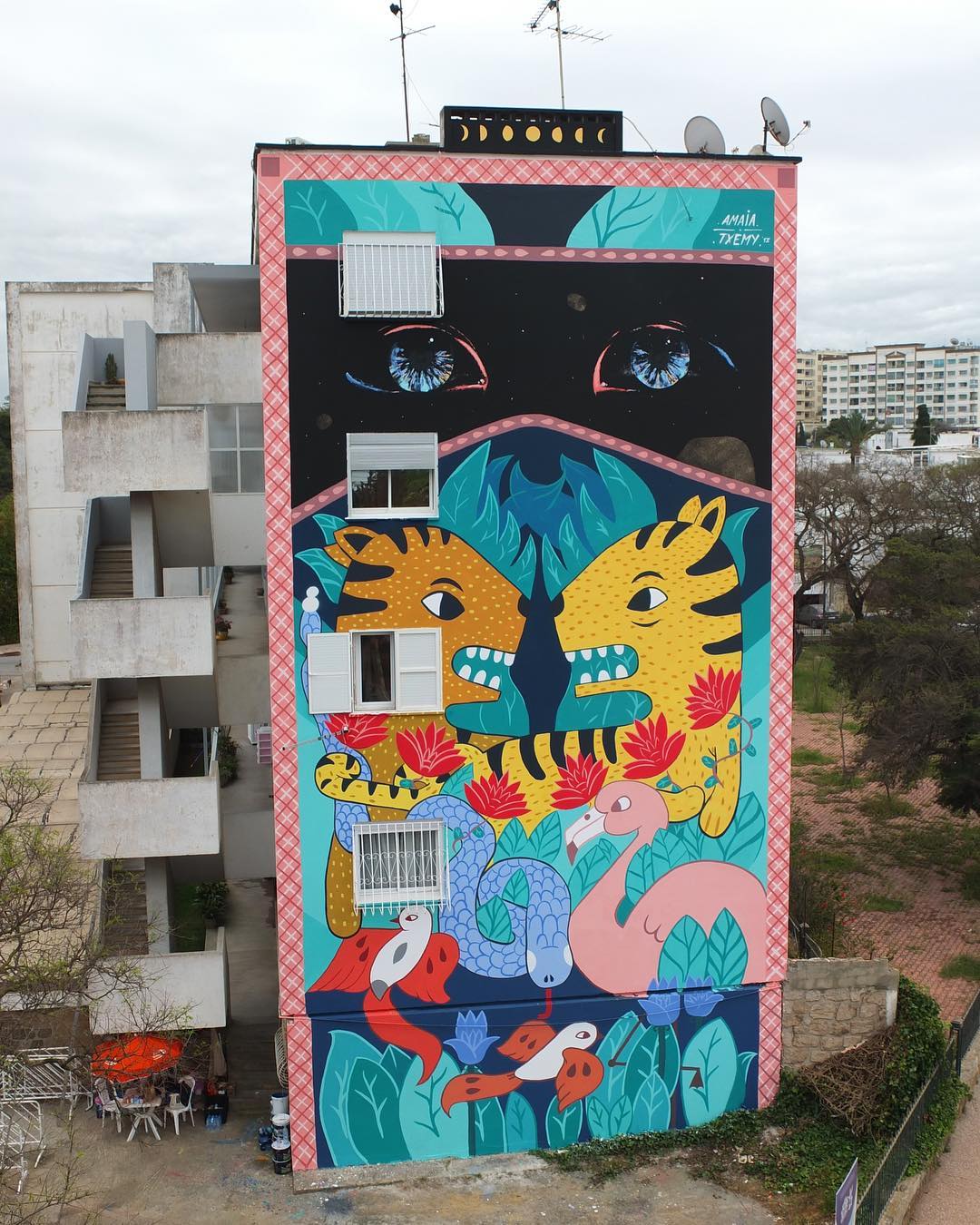 Wall in Rabat with her partner Txemy

Your work in three words…  Funny, spontaneous and fresh.

And your personality? My work is quite representative of my personality, I guess we all do a little of what we are. I’m a bit like that, I like things fast, although I’ve learned to master my impulsiveness and think things through a bit more. And I like to have fun too. 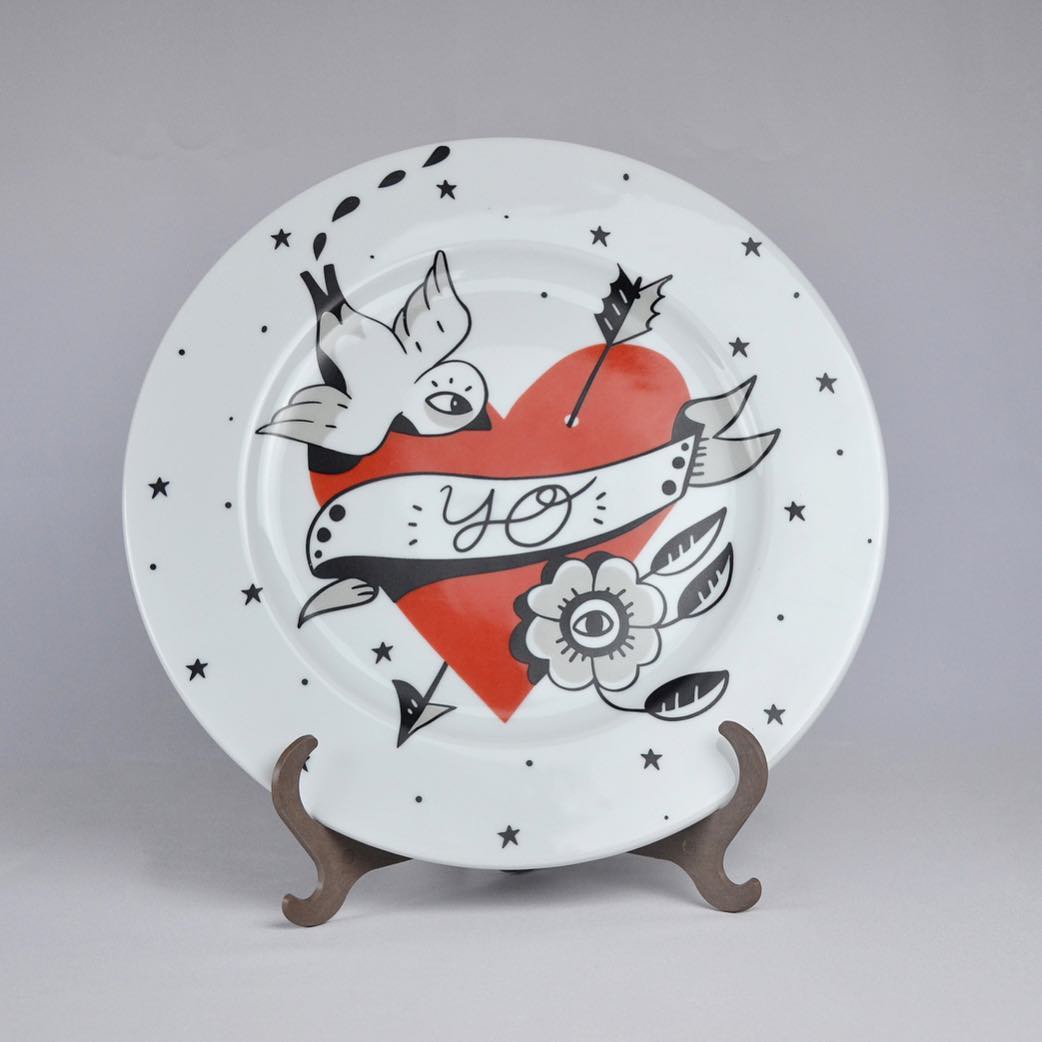 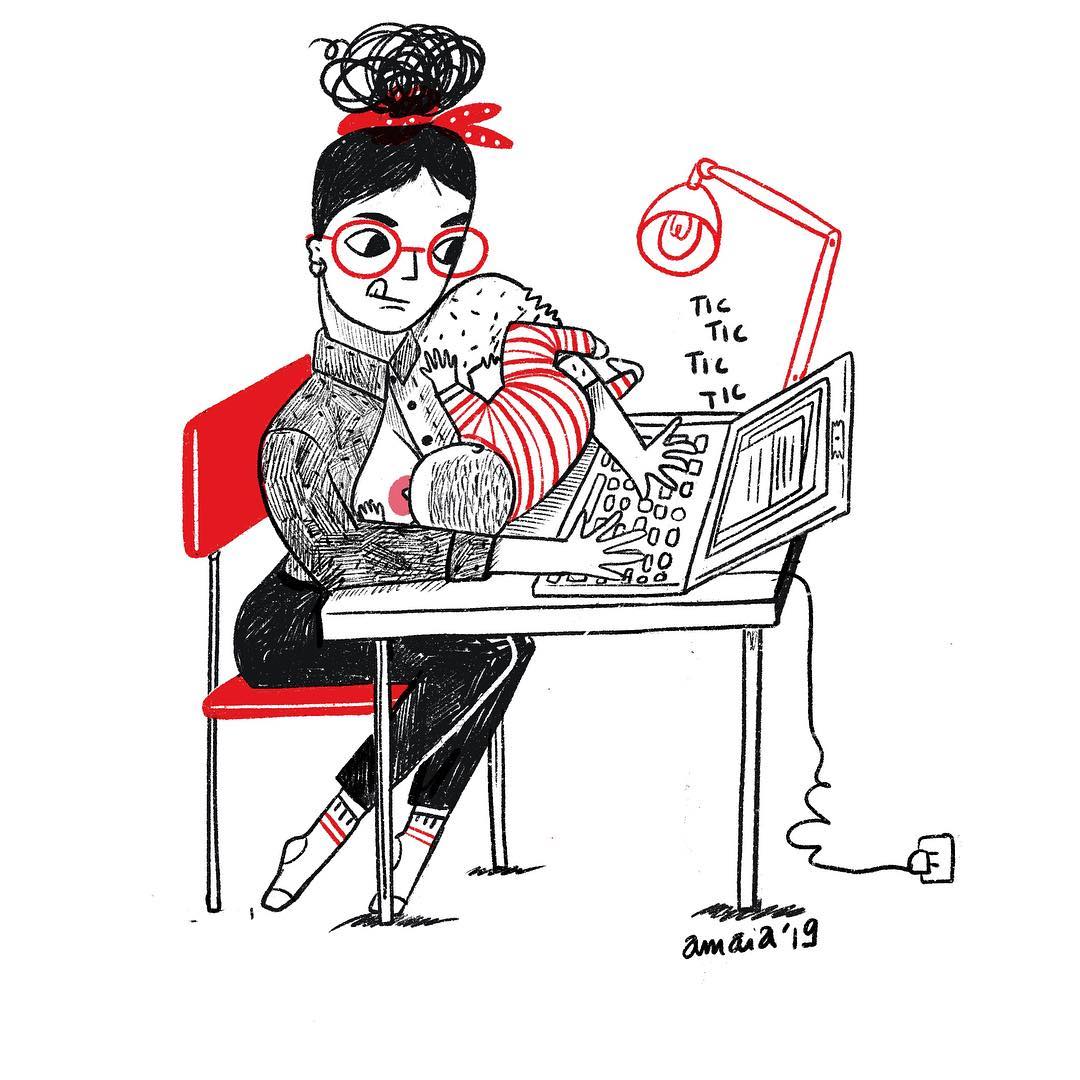 A spot to paint… Paris. I was there in a very special moment with my sister.

A special place for you… My parents place. That’s home.

The last book you read…. “Lectura fácil” by Cristina Morales.

A movie? I saw an Italian movie on Filmin that I thought was very cool. “Ricordi” by Valerio Mieli. You really need to focus on what’s happening, but it’s a film based on memories, on how we erase them and what happens when you forget something, as if it never existes. 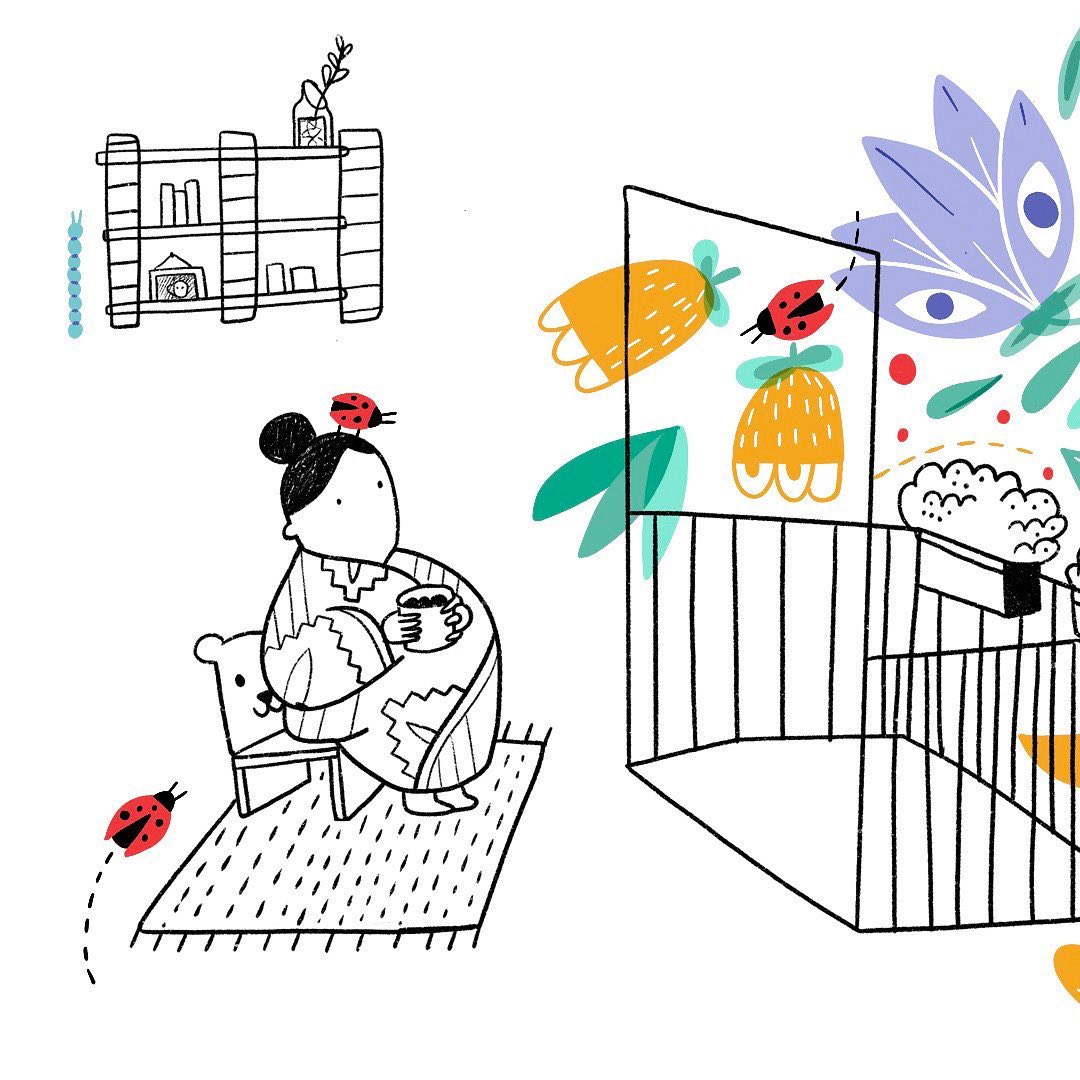 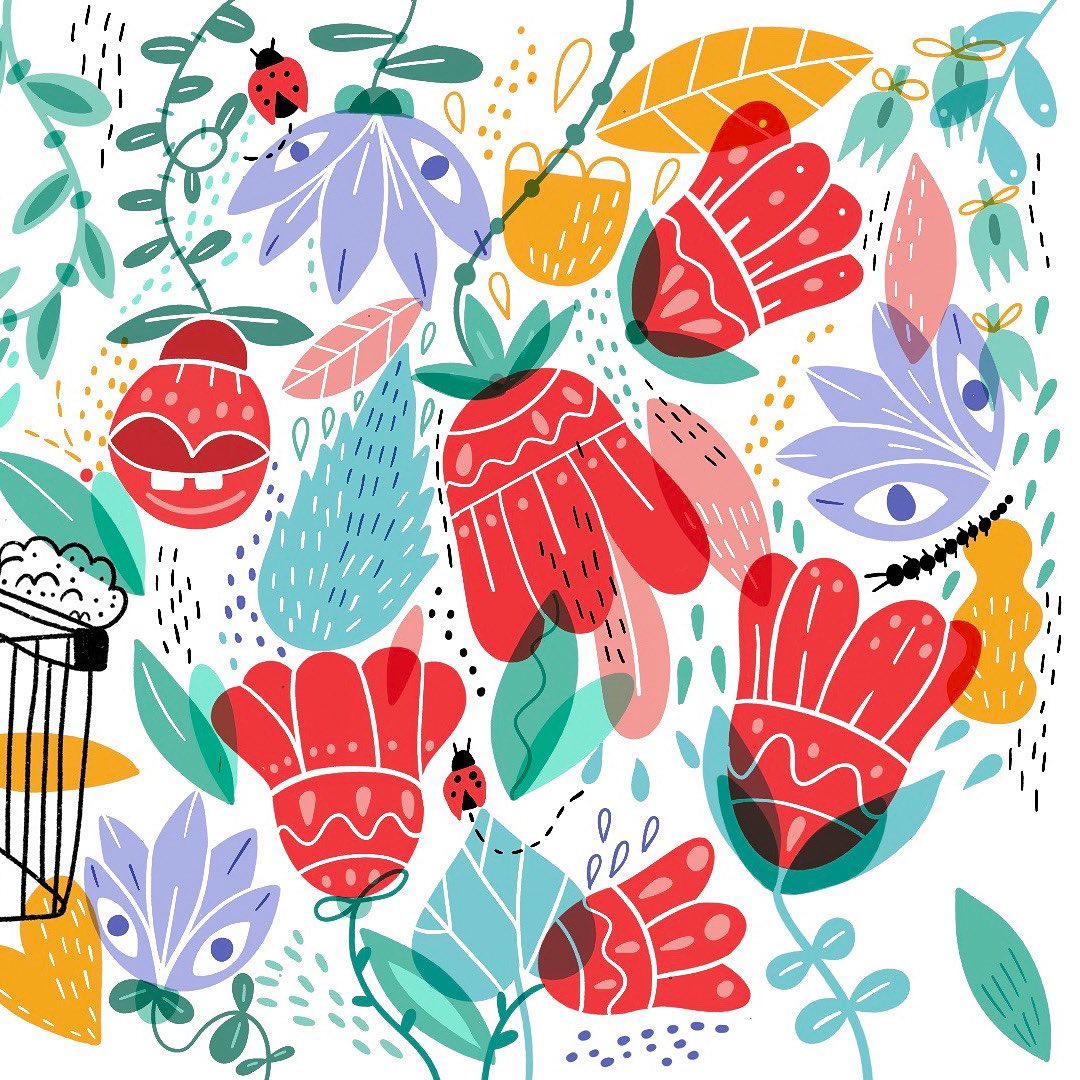 A series? “The Soprano”.

What music inspires you? I am very eclectic, I like everything from French rap to traditional Spanish music… Music tells me stories and that suits me very well. When I draw I like to be evasive, if I’m too concentrated I’m more likely to make mistakes.

A Museum or Art Center…. Tabacalera in San Sebastian.

A special painting for you?Picasso’s Gernika for the personal and family involvement. My grandmother on my father’s side was a survivor of the bombing and it is a painting that has always hung in our house. 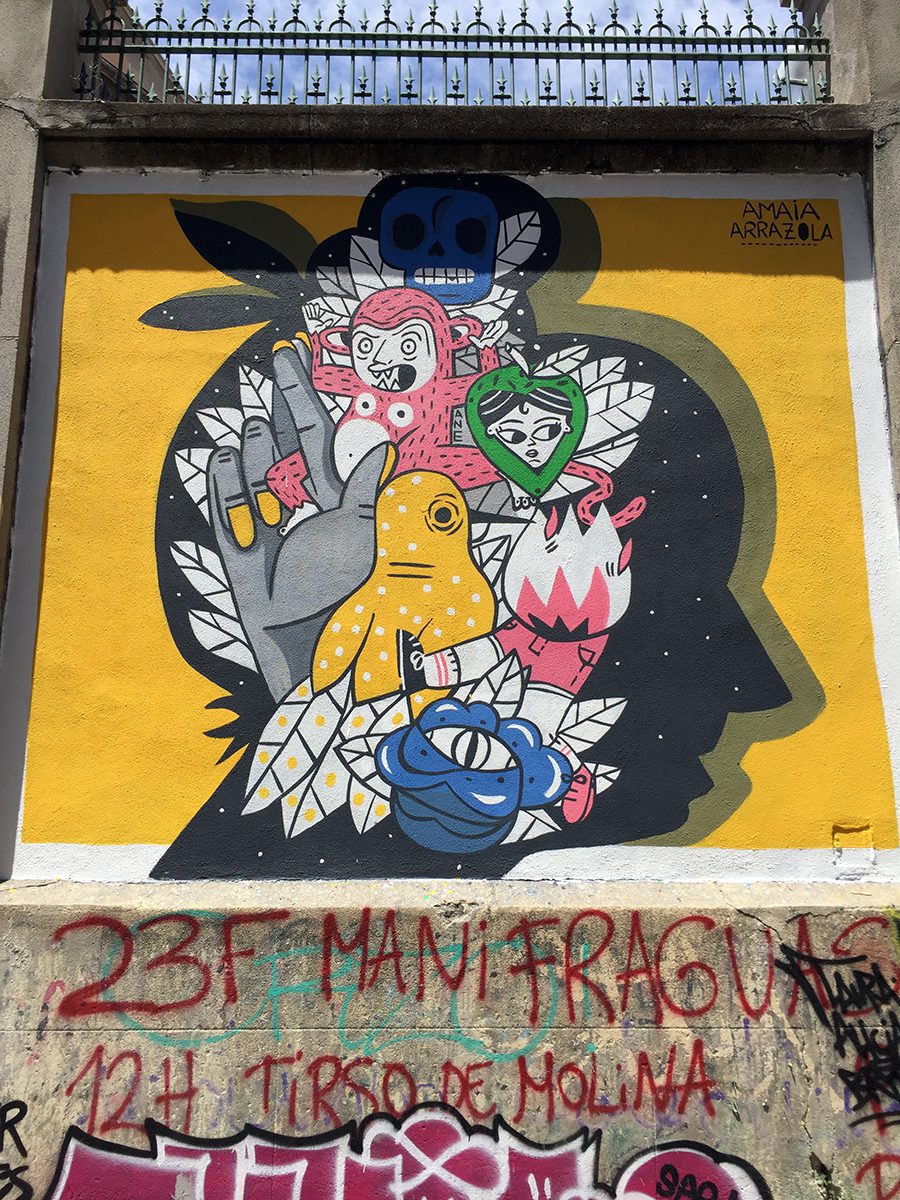 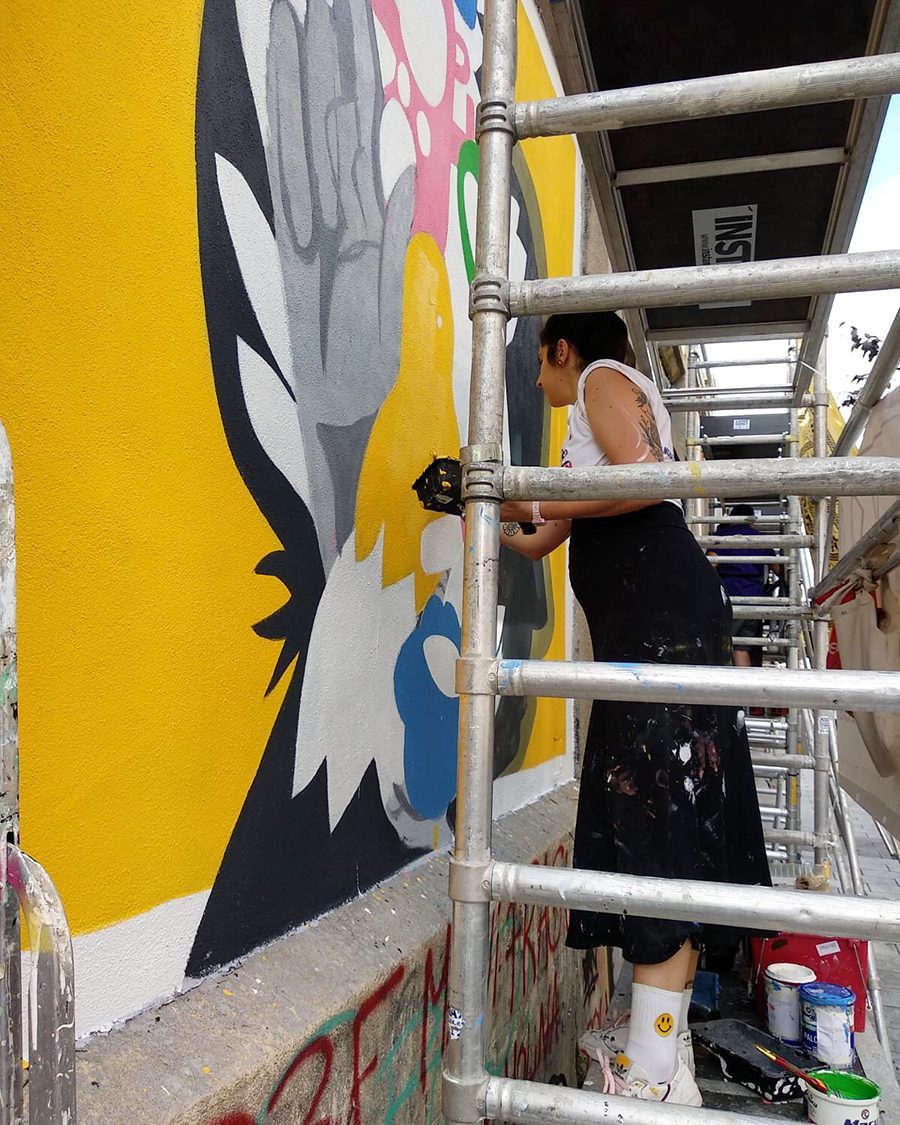 A wall? The last one Marina Capdevila has done in Barcelona’s Nau Bostik water tank.

A bar where to find you? El Jabato in Barcelona.

If you had to chose a meal? Croquetas. Of whatever, ham, squid… all of them!

What do you fear? On a personal level my concern are always about health, about my daughter and the people I love, but on a professional level that fear transformed into motivation is the long haul. We are not here to kick it today and forget it tomorrow, but to continue living from it in thirty years. 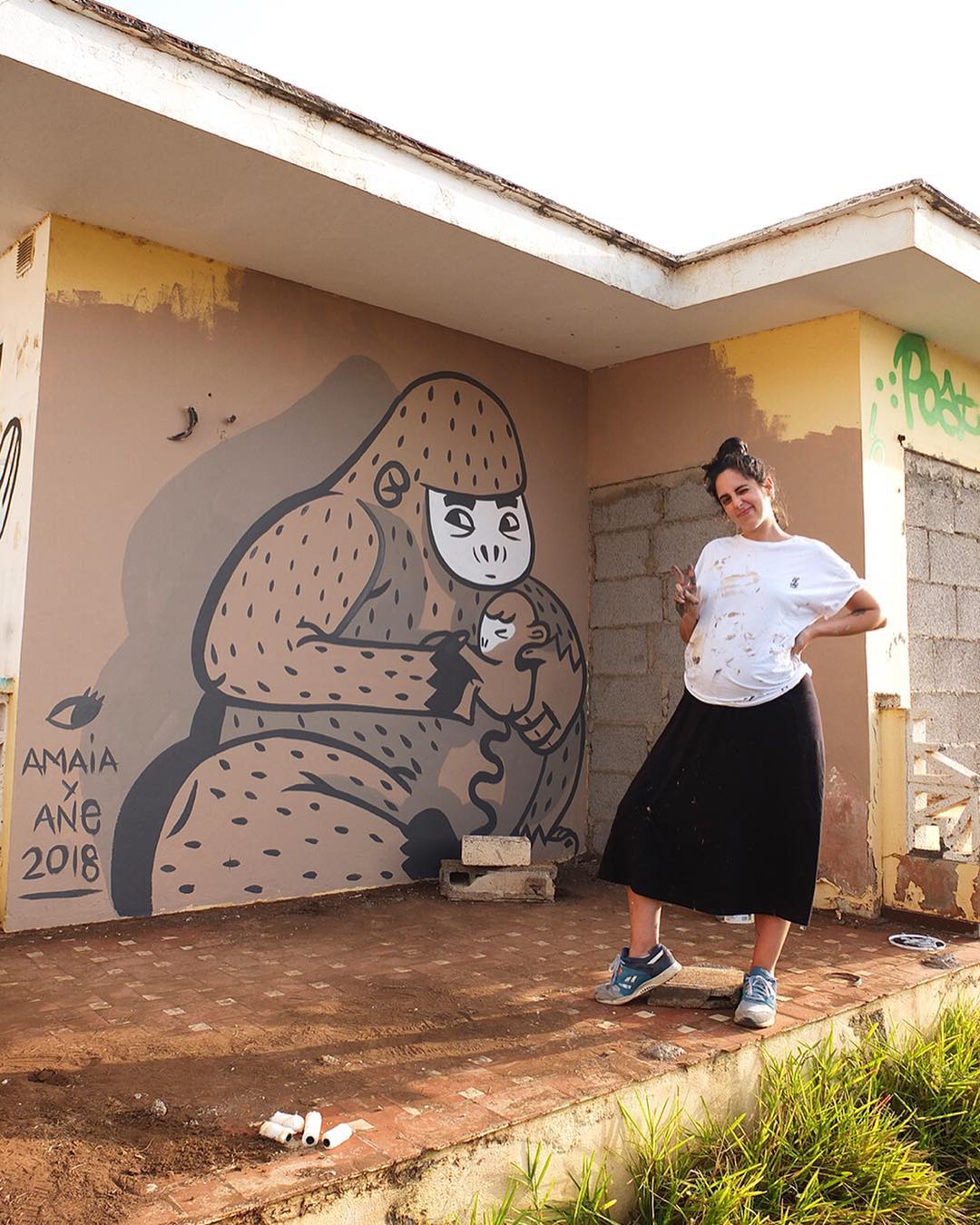 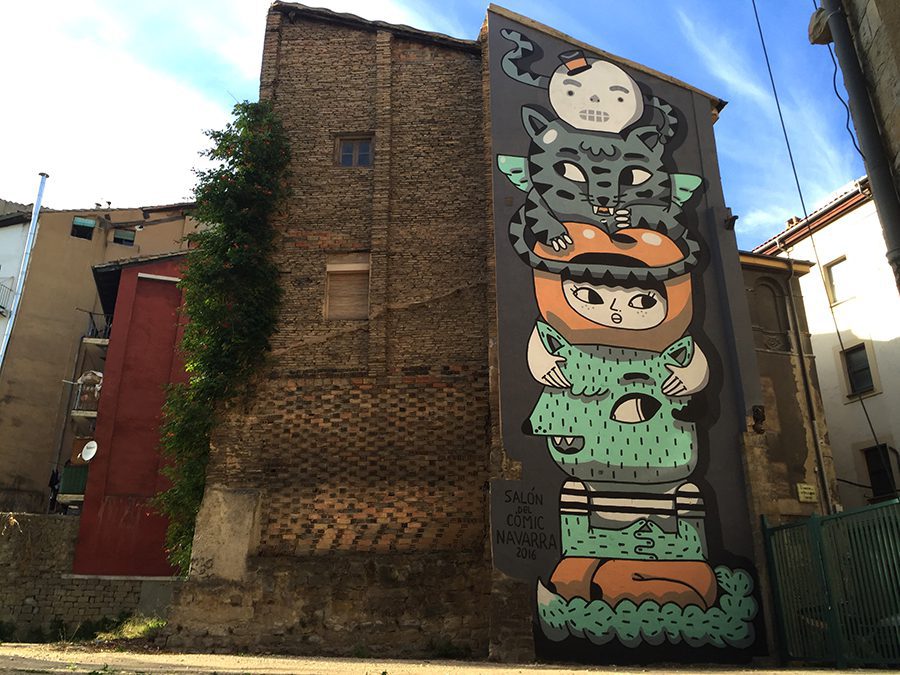 Any fixation or obsessions? None. I try not to have them, they just tie you up.

What can’t you stand? Jealousy, falsehoods, people talking about you behind your back, unprofessionalism…

Alone or in company? In company.

How do you waste your time? Right now I can’t afford to lose a minute because I have a baby…

A goal… To remain like this for a long time.

What are you working on right now? I am working on a new book about the motherhood process that I have experienced called “The Meteorite”. Also during the confinement I made a series of cardboard sets for my daughter Ane and I was contacted by a publisher to transform it into little books and it will also come out in the fall. 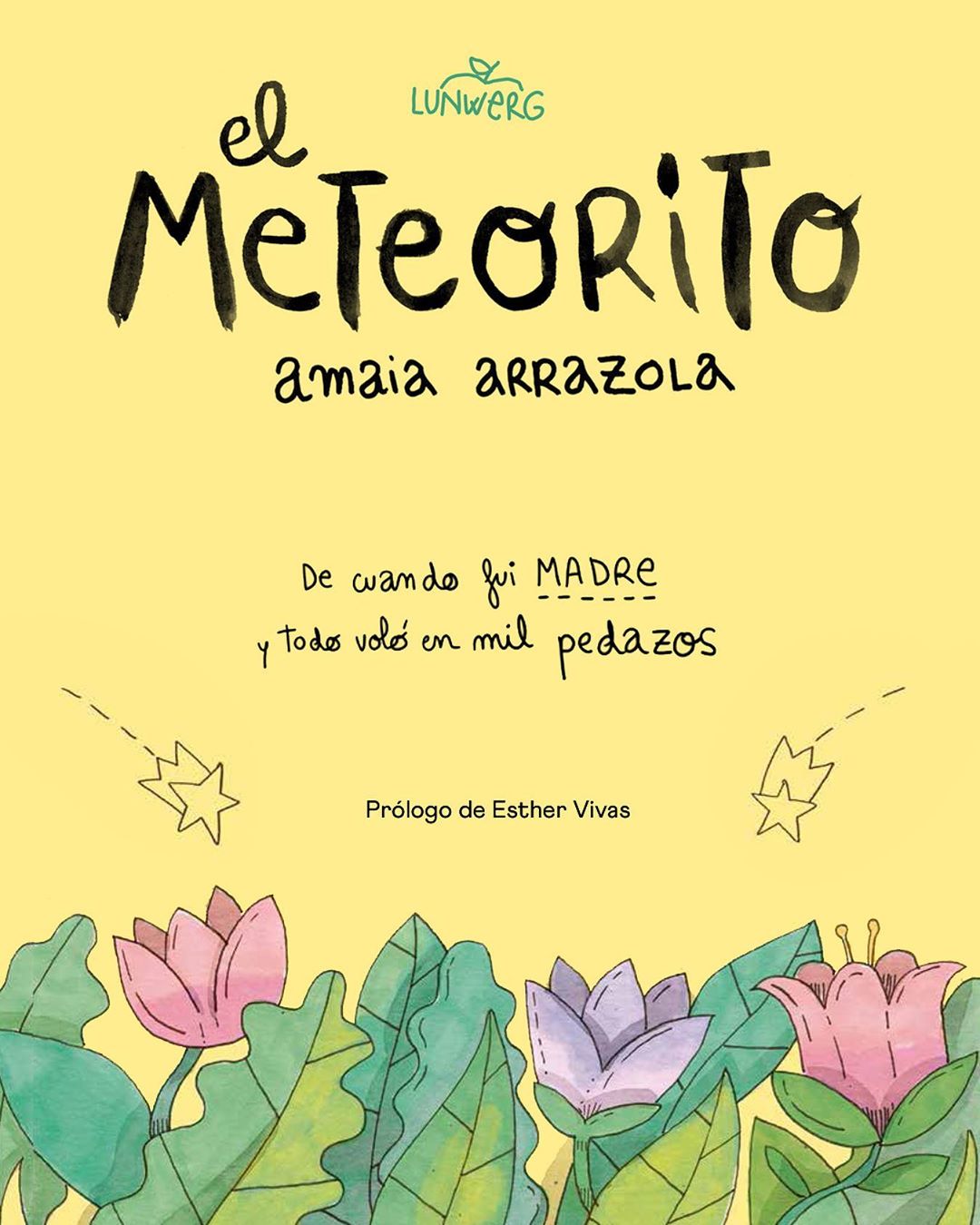 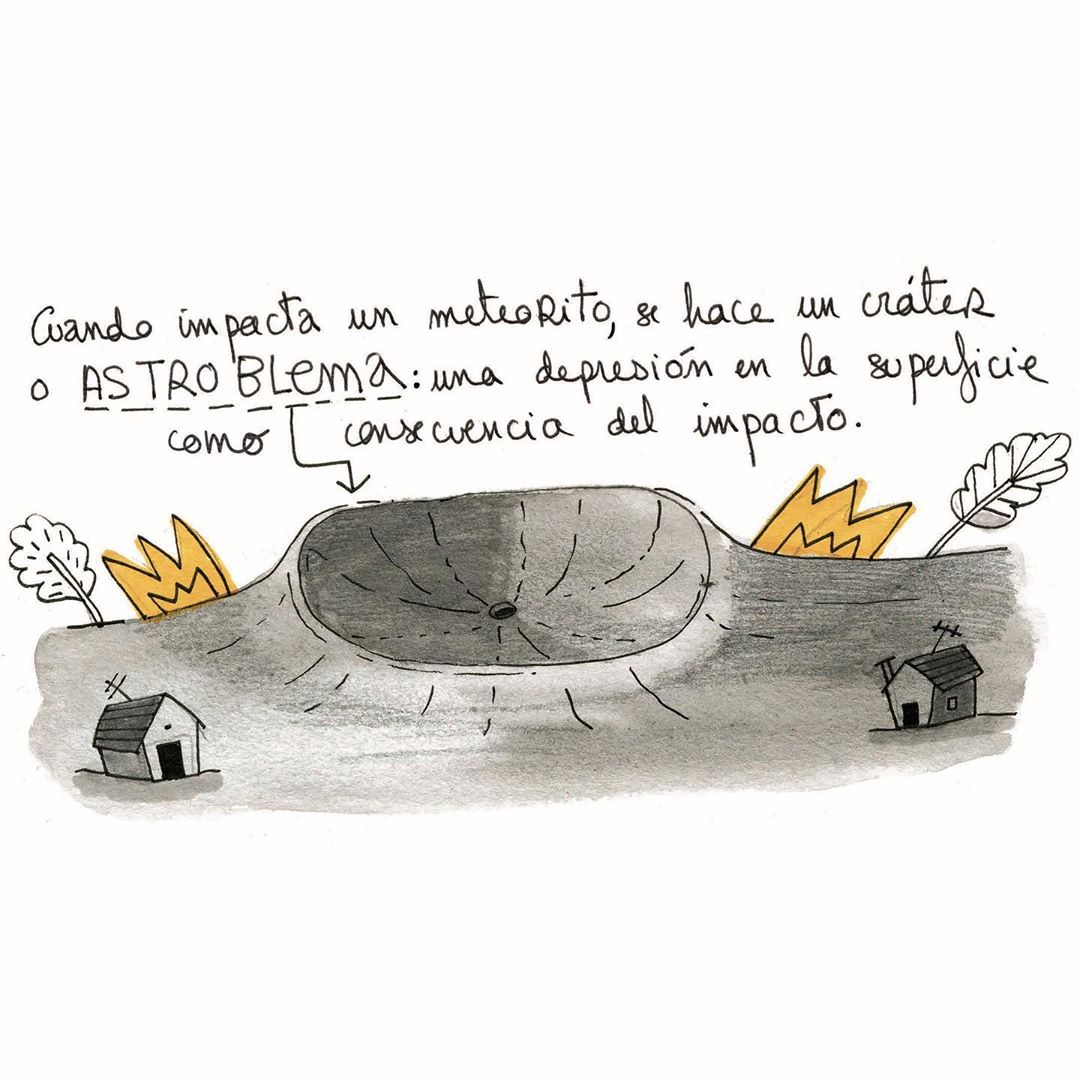 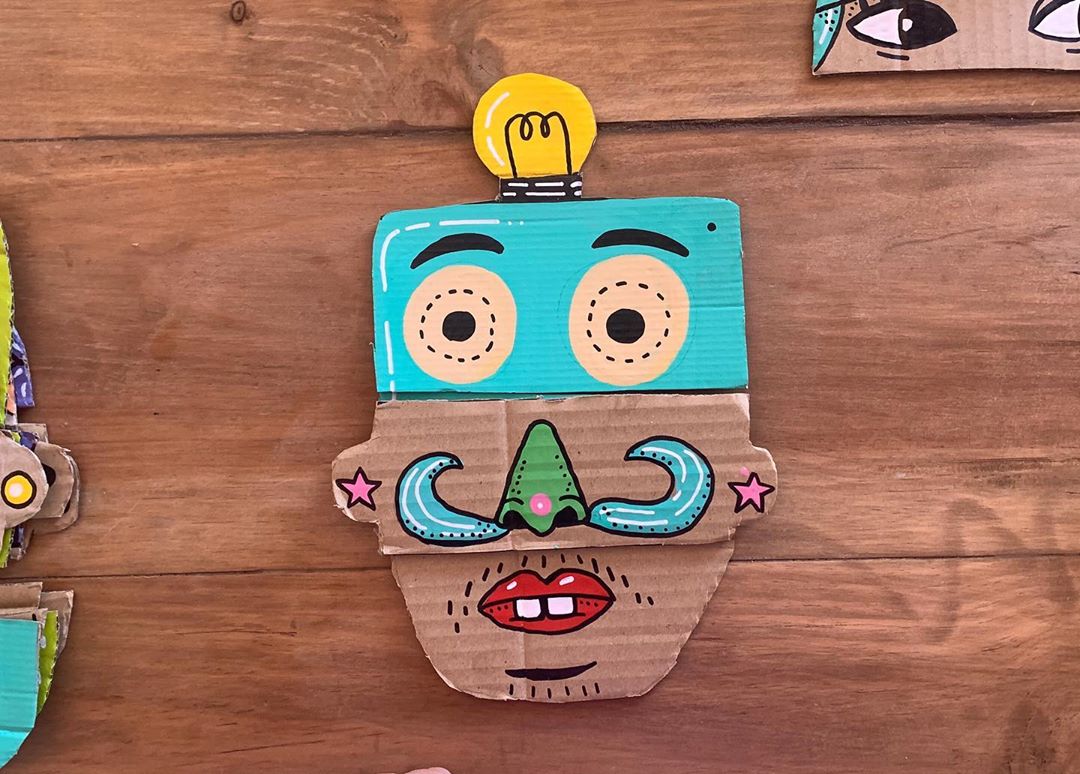 Your ideal future… Stay in Barcelona working on this and not much different from what I am living now.

A life mantra…“Avoid paralysis by analysis”. I’d rather do things, make mistakes, and slap myself than not do them at all. The big mistake is not doing something. 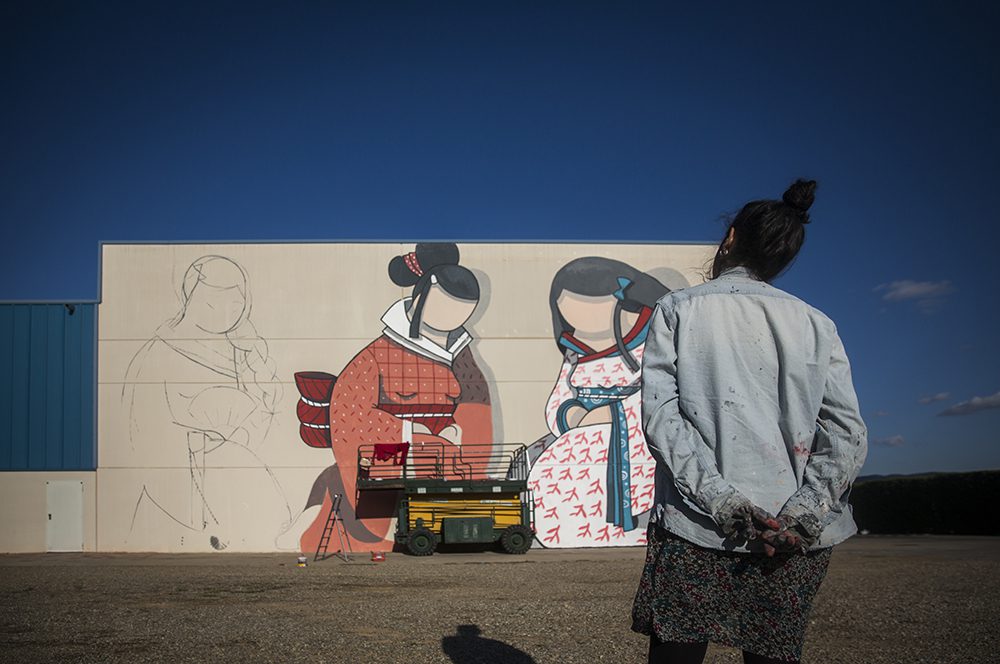 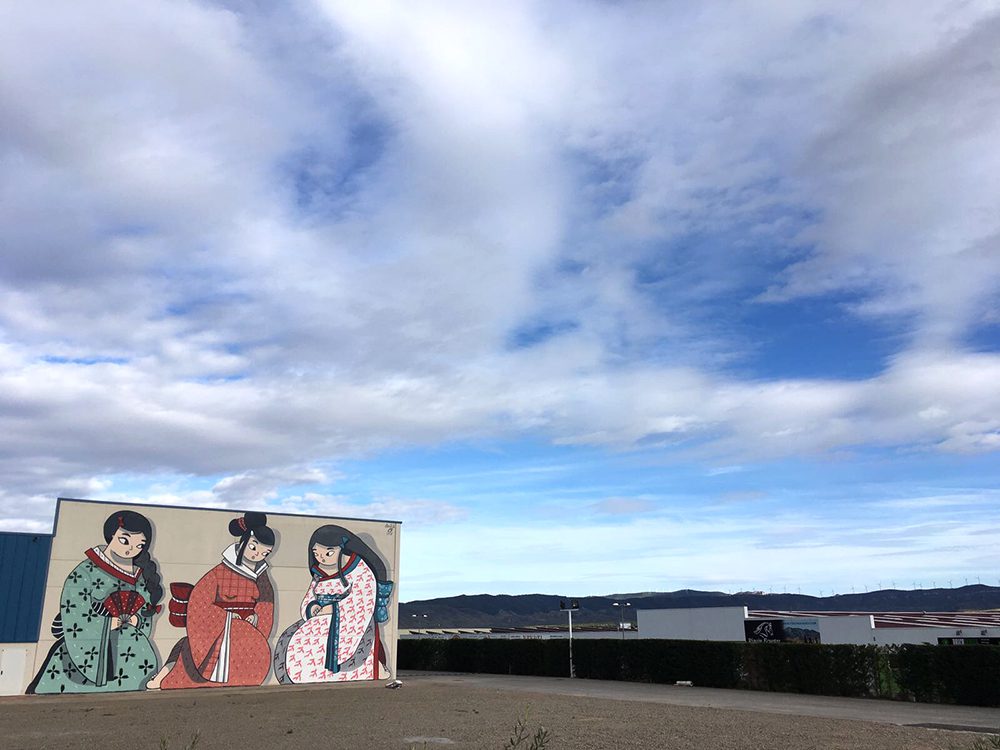