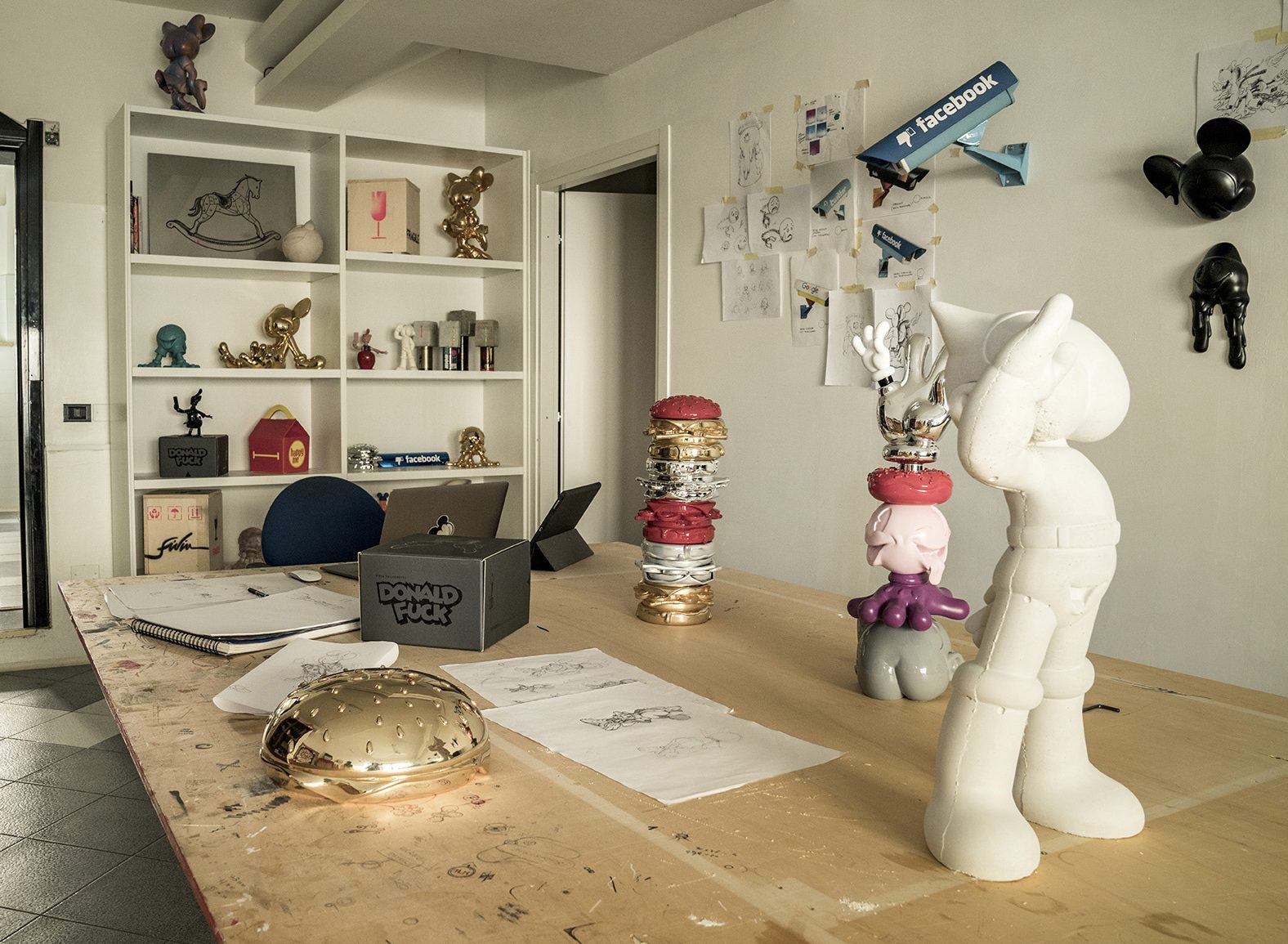 Named after Phidia, one of the most important Greek sculptors and painters, Fidia Falaschetti (Civitanova, Italy, 1977) grew up in a very creative and artistic family on the Italian east coast. On his early years he was inspired by the street art and the hip hop scene and ended up studying Production Design. After working for many different international brands as a graphic designer, illustrator and photographer it was in 2007 when he decided to take the big leap to focus his career strictly as an artist. Now he defines himself as a pop artist, ‘pop’ understood as ‘popular’, using contemporary icons to talk about the craziness of our modern society and transforming them into a criticism to our social behaviors. ‘Freaky Mouse’, ‘Donald Fuck’ or totems made out with consumerism symbols such as burgers, donuts or pills are part of his imaginary and he sculpts them in different materials: wood, aluminum or even concrete. This October he will be presenting his new documentary “Art Is A Family Business” on Sky Arte Italian tv channel and December is the month chosen for the launch of his next sculpture edition, this time a bigger edition of a model in between a toy and a precious sculpture. Keep an eye on his next moves, you don’t want to miss them! 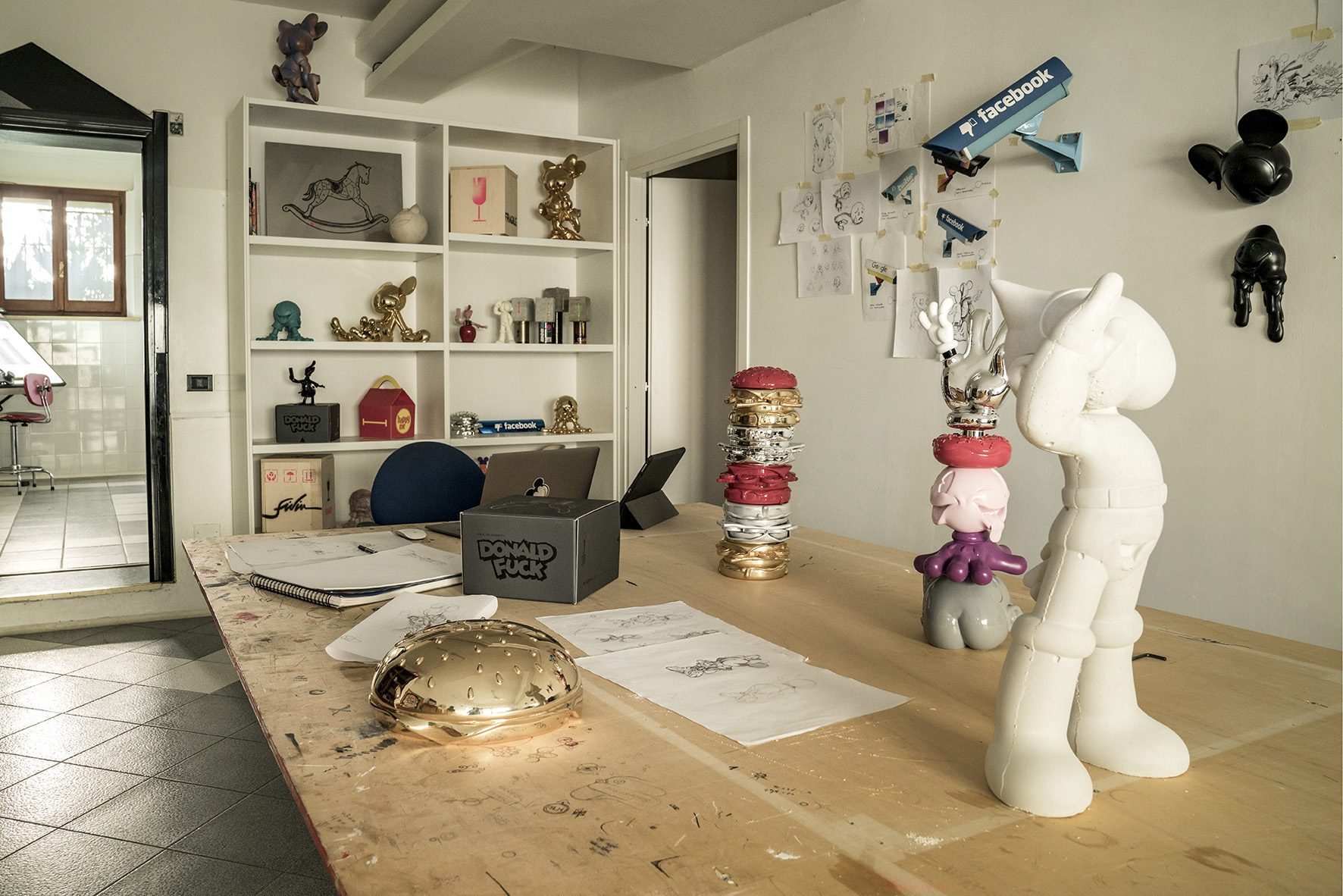 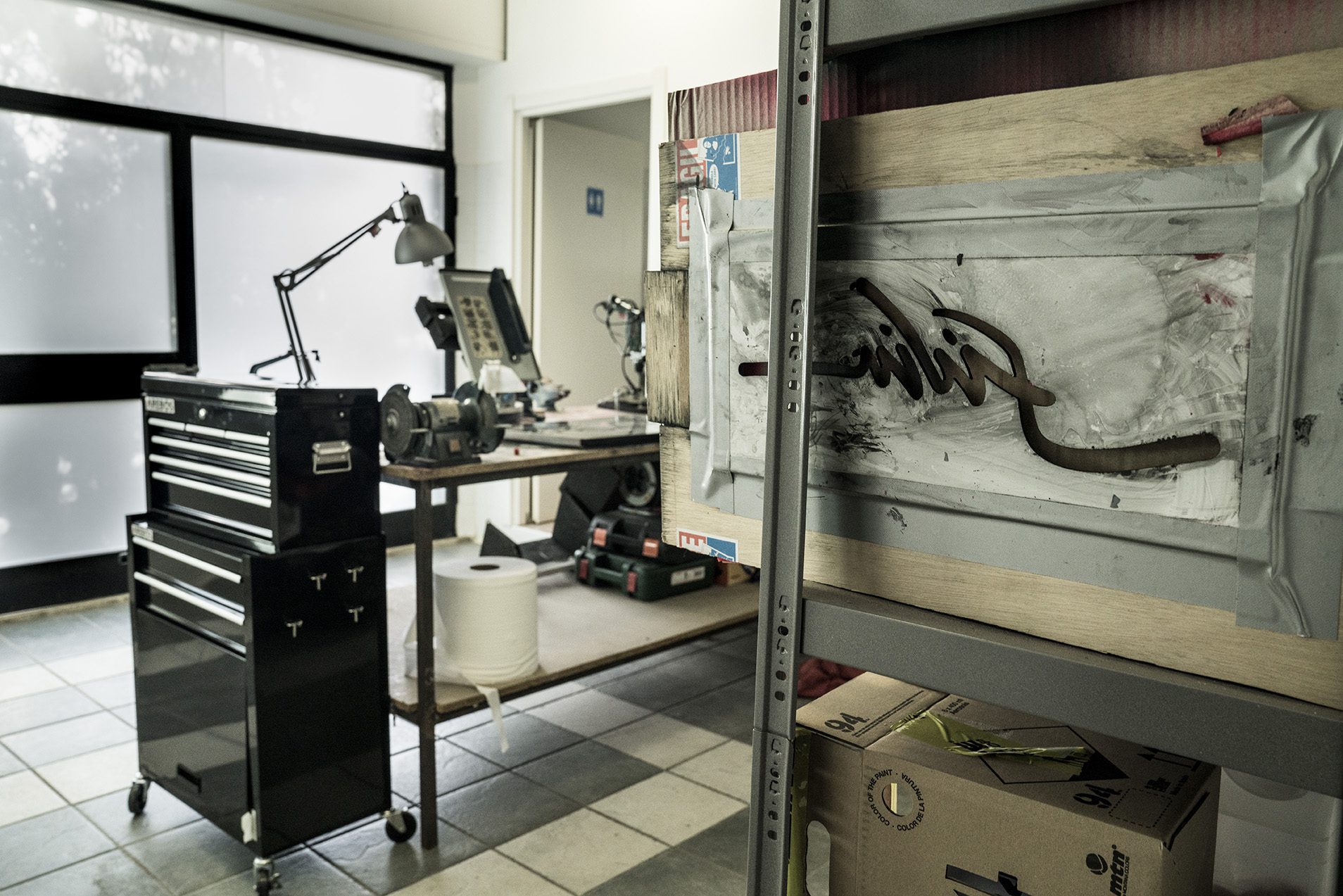 «This is my Italian chapter of the studio, I spend most of the time of the year in LA but right now because of the pandemic I came to Italy so I could spend more time here during the summer. This is where most of the production is done, for the sculptures I collaborate with different facilities around my home town. In LA the studio is a lot bigger and full of stuff but I don’t need such a big place here in Italy. It’s more like a familiar studio, my dad has been working with me since I moved to the US here he is in charge of following the production, taking care of all the sculptures, when they are coming out, all the editions, the shipping… Also my sister (still family!) is Director of Production… In the other room I have the storage area with the crates, packages, that will be deliver all over the world. Sometimes it’s full of boxes, which means they are about to be shipped… And then I have the ‘workshop’. Whatever has to be done, the hard work, cutting…». 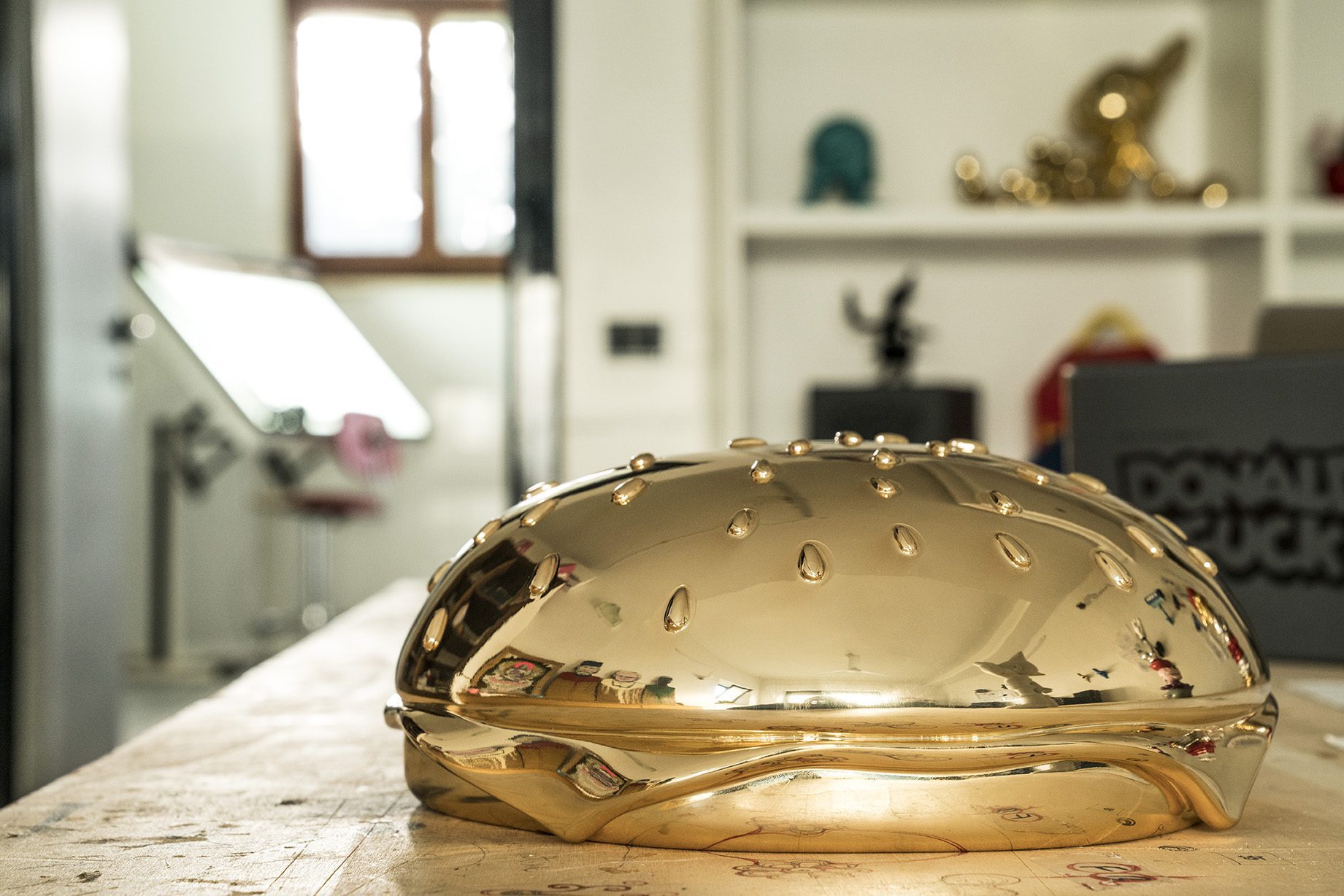 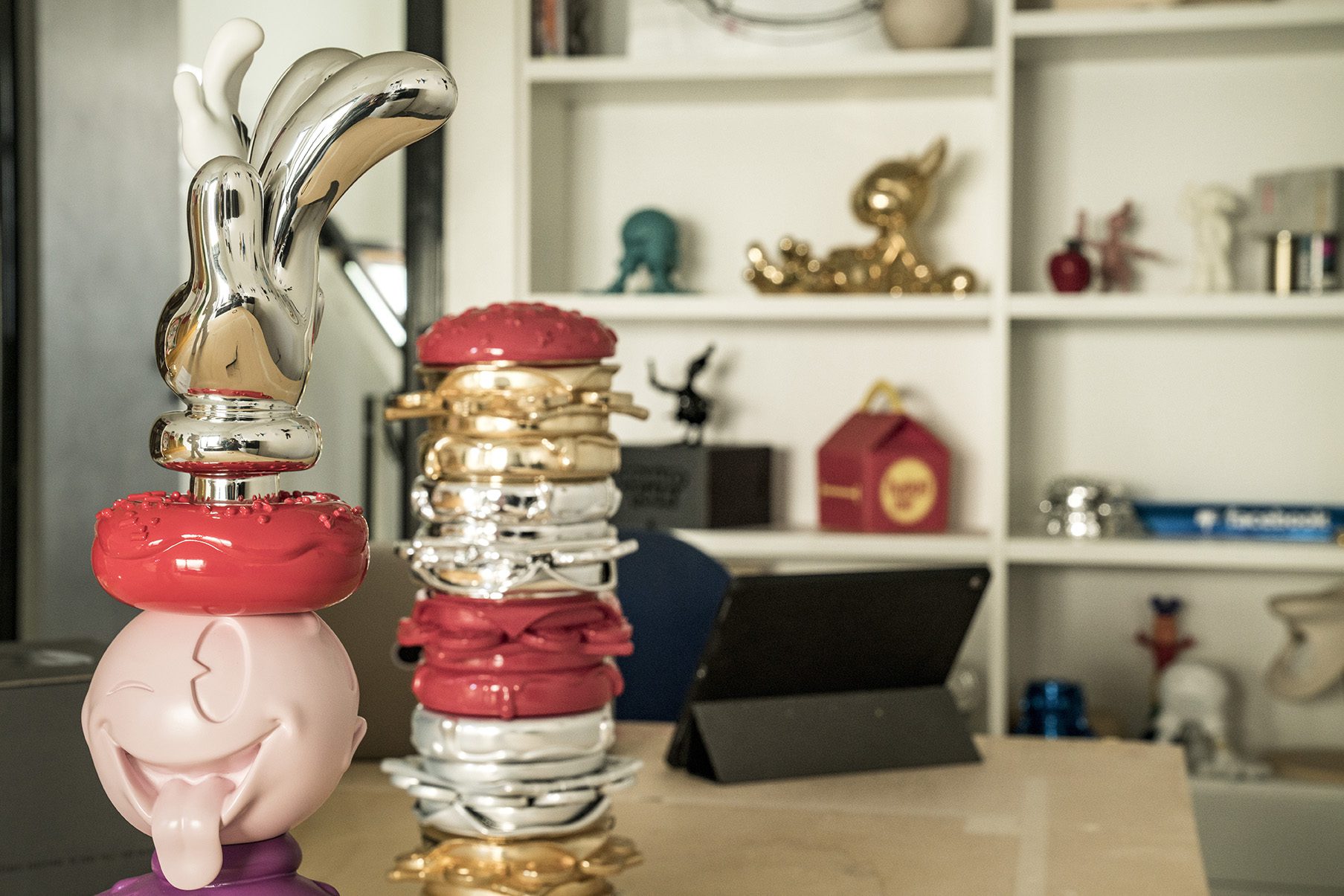 «I am from a small town, Civitanova so I was going to Rome, I was going to Milano and I was struggling to do exhibitions, to have collectors after my work… I made and exhibition in Paris that sold out. Some people from the US that I met told me I should go there to make my art. ‘We can give you options, the possibility to keep doing what you’re doing…’. So I went there and a lot of people started to give me chances. I was noticing that this people were just looking into my art and liking it, they would buy it and support me. This wasn’t happening in Italy honestly. I was a teacher by that time, which is good, but I wanted to be an artist. So there is when I decided I needed to go abroad. In the US people buy art. They do. If they see something they like they just start to collector you and they just not buy one but they buy the next one… And I will say is the same thing with Asia, people buy art. I became a collector myself, I started to trade with artists, buy art… Now I understand it’s an addiction, I want to have so many things!». 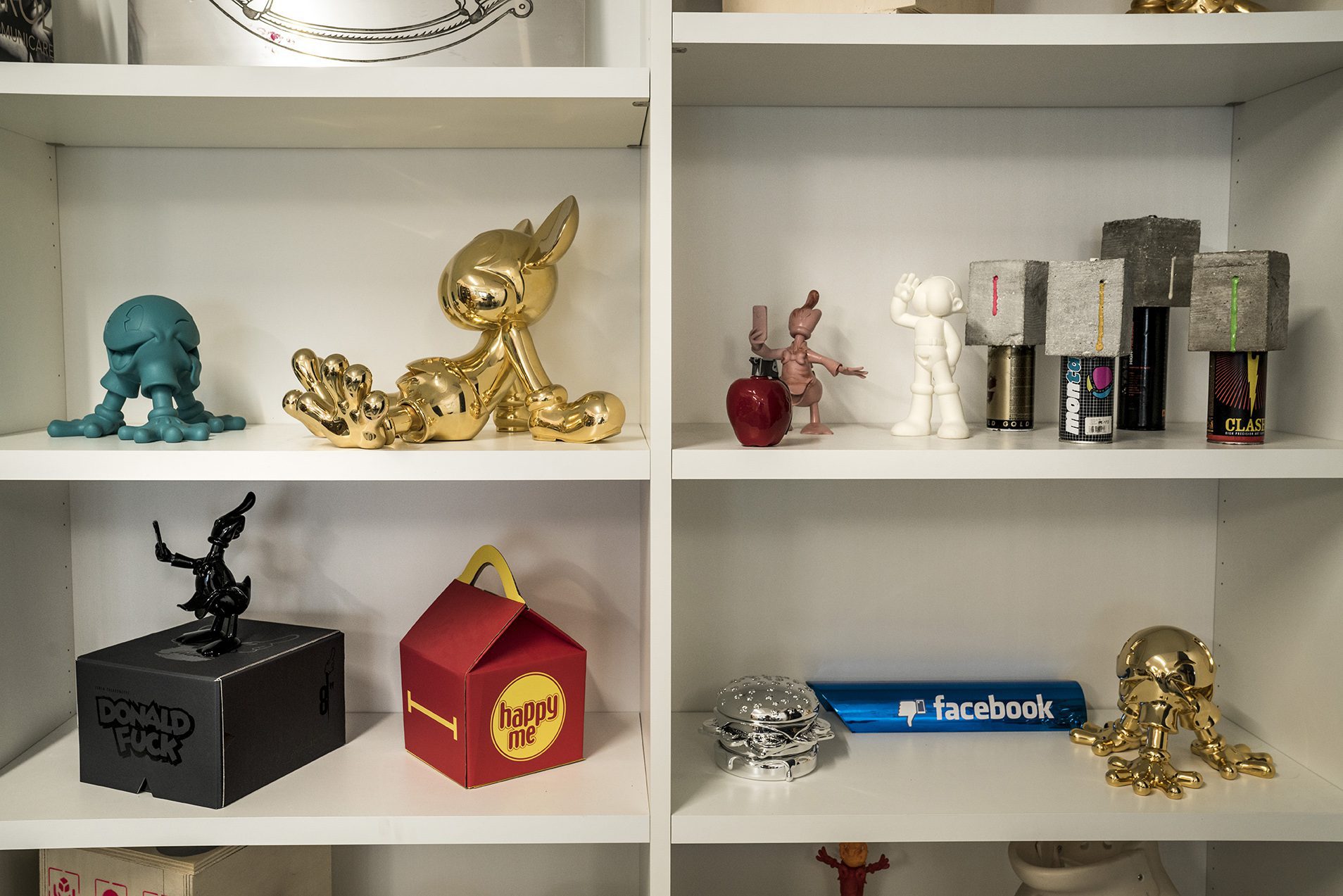 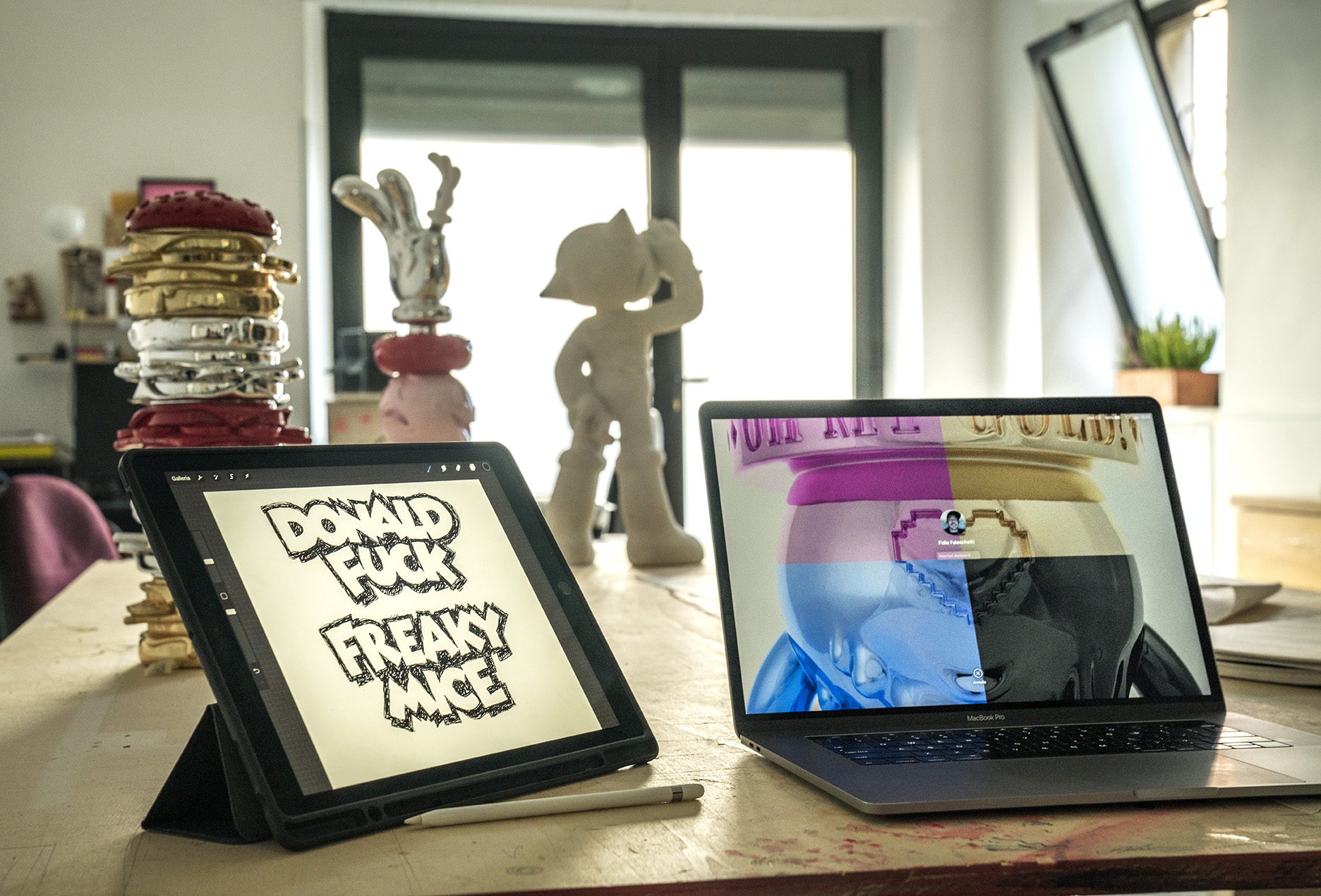 «I really started to do art when I was 30, I started to do paintings and Contemporary Art work because it was cheaper, I wasn’t even using canvases, I was using recycled wood, pallets, skateboards… It was very affordable. I studied Production Design and Scenography in the Fine Arts Academy so I always liked to do something you could go around, something that would interact with in space. ‘Apple Grenade’ was first sculpture, I did all by myself, a friend helped me with some aspects and it was very affordable. At that time it started having some production costs but I went straight forward to what I wanted. Later, when things started to get a little bit better economically I invested the money of the paintings I sold into my sculptures. It’s much more expensive to produce sculptures! You have to do the mold, buy a lot of material, you need a facility to help you with the process and when it’s something big you have to produce it in the place you’re working, you cannot bring it form the US or Italy, so the expenses keep growing. Even if you’re doing the sculptures inside your studio, you have to buy a lot of materials. If we talk about marble, even more! Wood or stainless steel, bronze… same thing. That’s the main reason why sculptures are done in editions, you do the first one and then you produce between five or eight. Below 9 the edition is considered not a multiple piece. That led me to do a ‘One of a kind’ exhibition, I liked the idea of making one in a lifetime pieces». 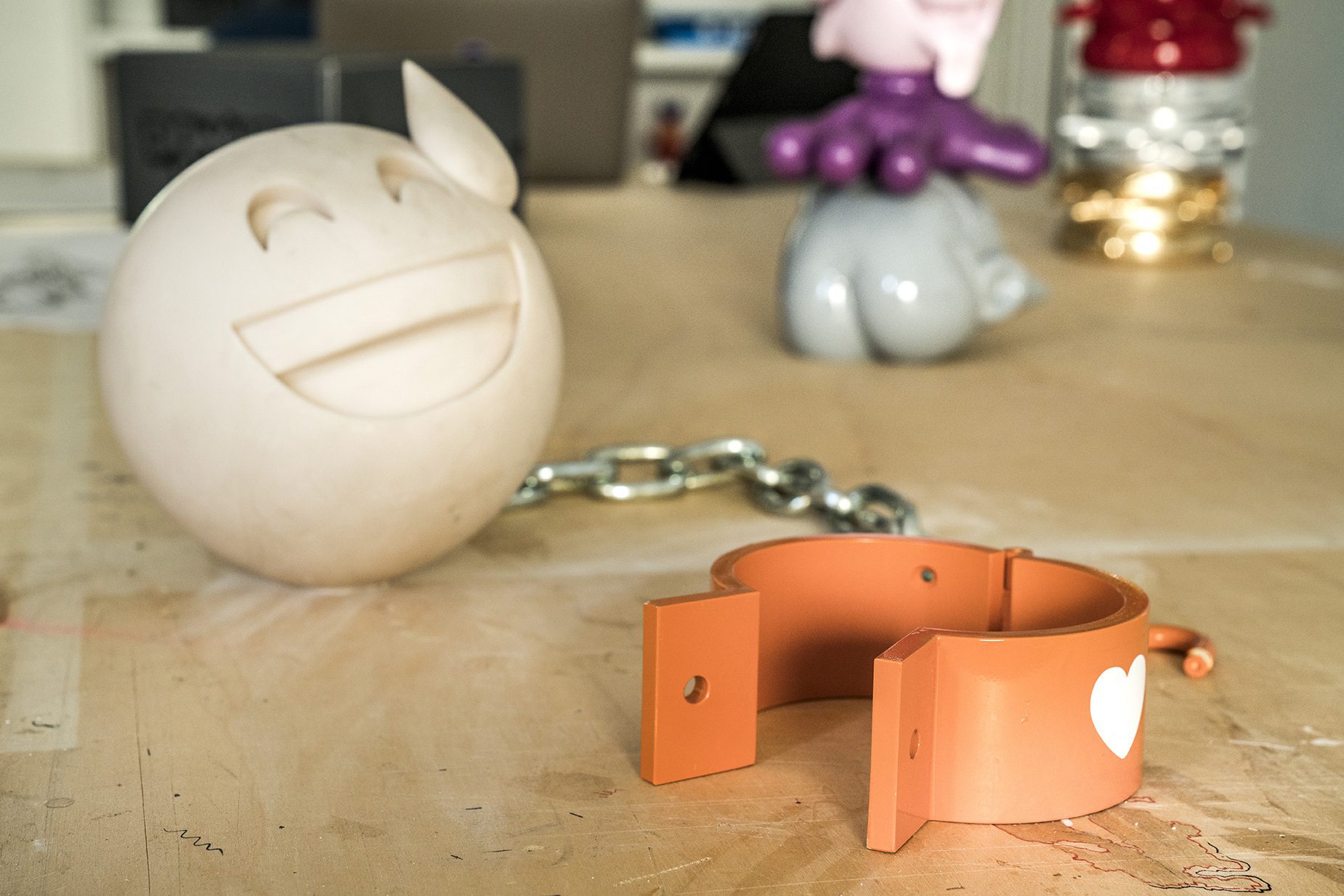 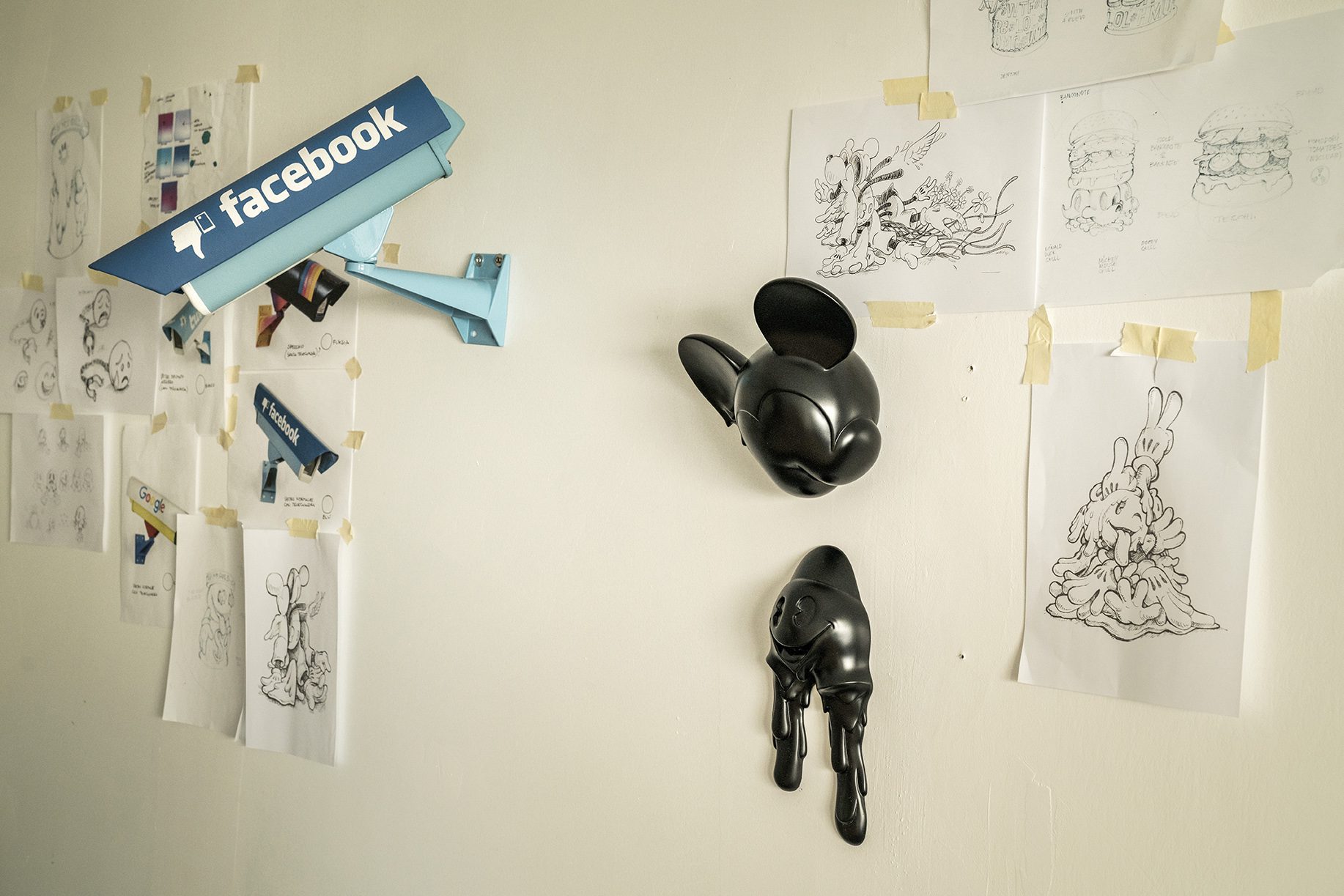 «With a lot of different projects I’ve been touching the social media subject. I believe social media its really going nuts right now, I’m not a big social media user even though I like the positive side of them but I do believe that nowadays people are really going crazy. There is I don’t know how many people with more than a hundred thousand followers and you get into their accounts and what do you get? People are just trying to get the attention, the more you get the more you want, just as consumerism works, but it doesn’t satisfy your insecurity, you just become even more insecure. This is test of the Social Media Slavery, I did the prototype with the resin mixed with some natural materials to make it heavier. The same thing for the Social Security Cameras, they became very popular and I did three different editions, this one here is on leather. I’m coming soon with a couple of new editions, of course TikTok will be in it. Same message with the Donald Fuck taking a selfie giving a middle finger. We need to talk more about social media, is something really important for me and I’m planning to do an exhibition just about it. On how I do interpret social media. It will probably be on 2021 but I’m still bringing everything together. I will probably do two exhibitions I’m looking to Taiwan or in London, I still don’t know yet so still trying to see which one where». 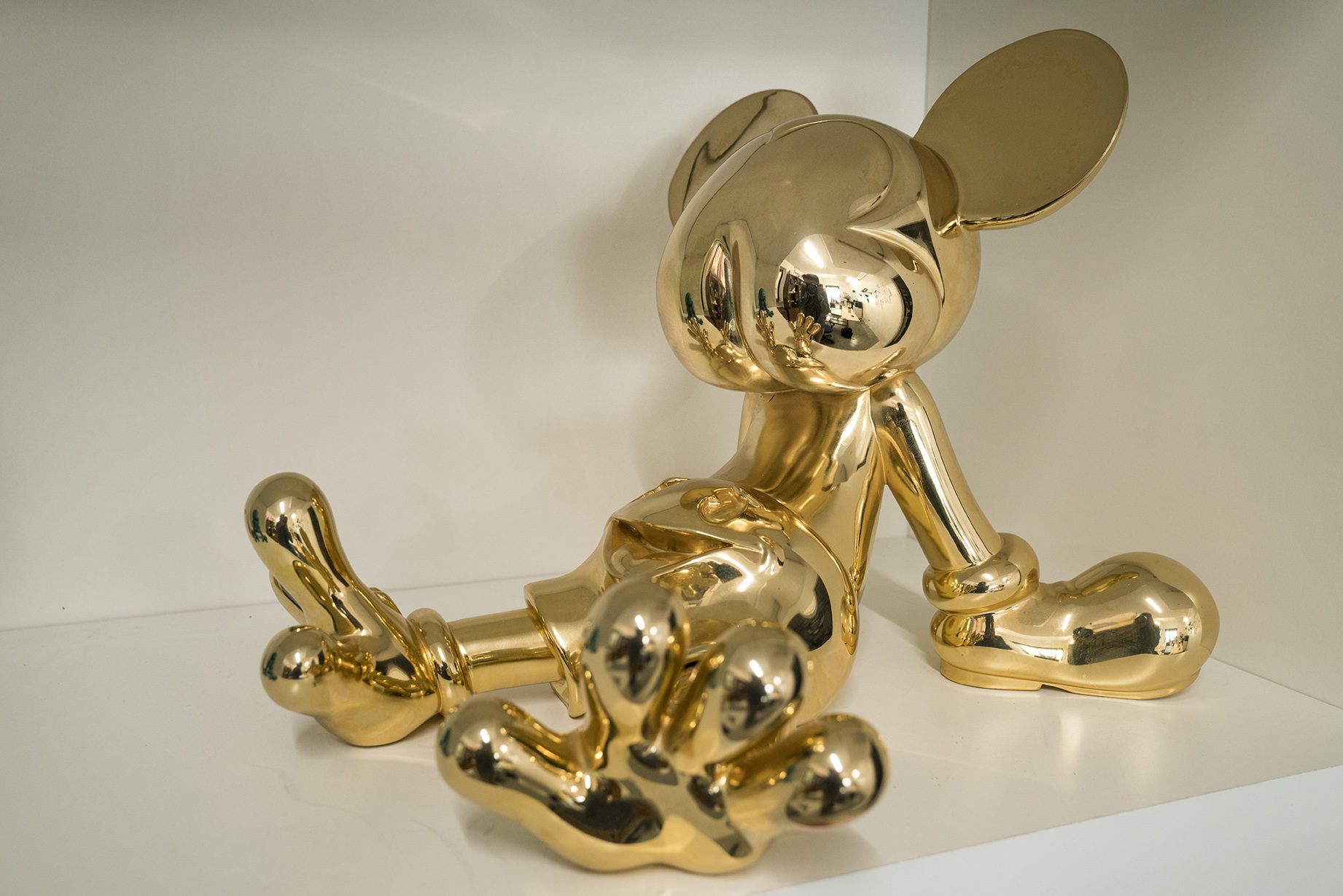 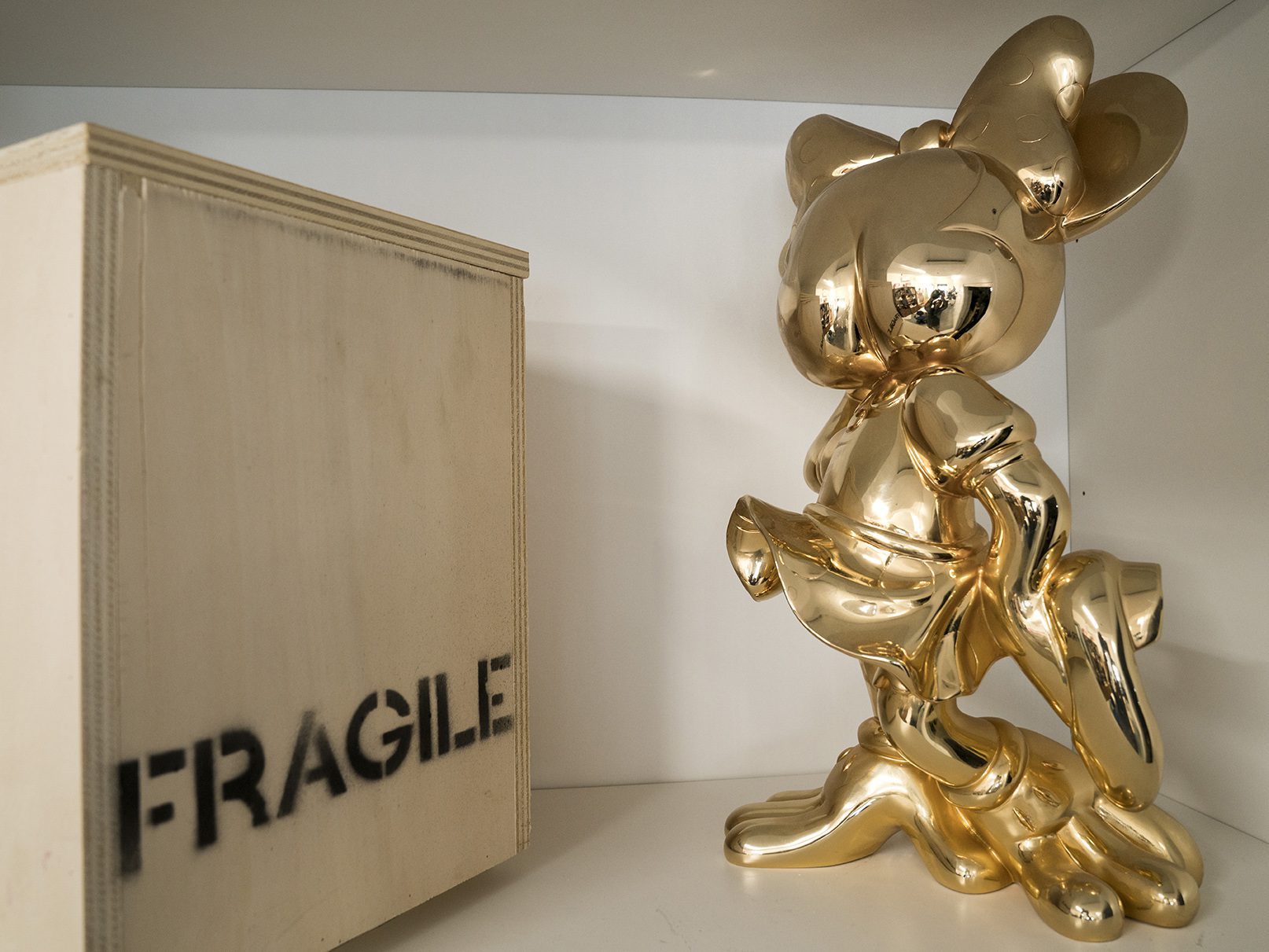 «This is something I’ve checked with a few lawyers and apparently if you change at least the 70% of the piece there is not a copyright infringement but anytime big corporations can just go to you and ask for something, at the end of the day you can just sit and talk to them. But I think being an artist is not making a massive production, you do small editions. On my experience I do something that reminds of these icons, but is not them, because if you take off the ears, which apparently the didn’t patent, it doesn’t look like Minnie or Mickey anymore. I can play with it, it’s fun!». 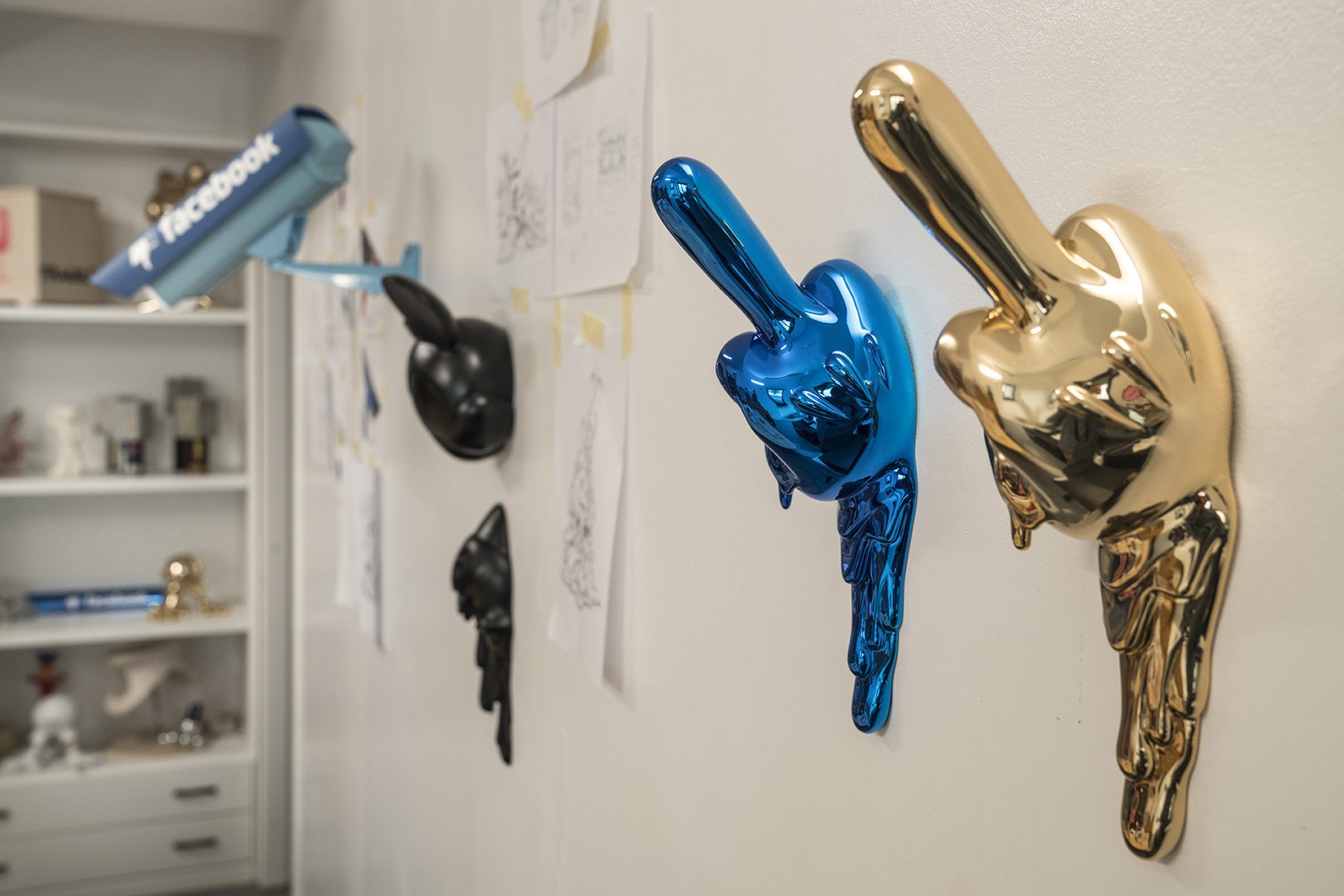 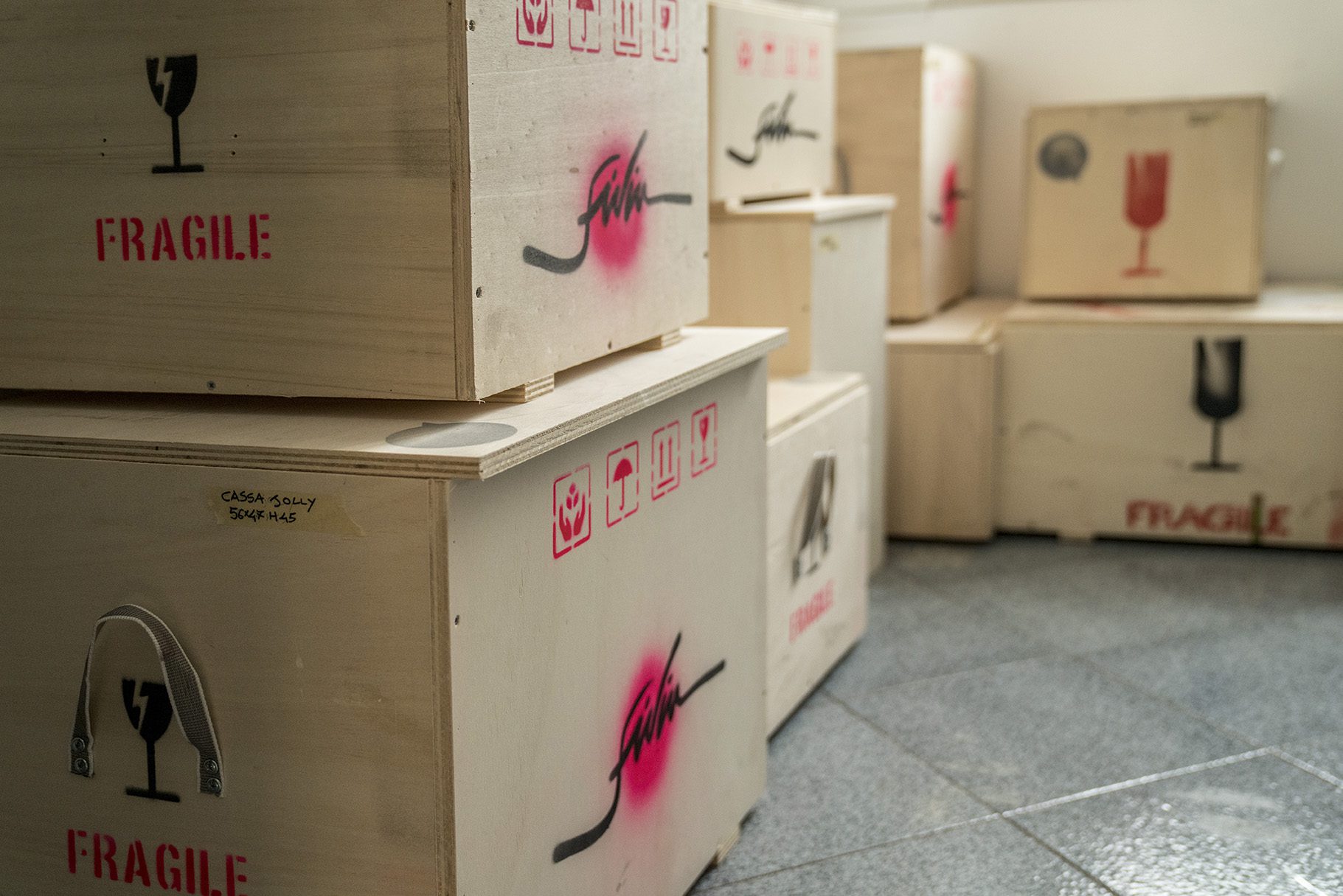 «I think we are overwhelmed by galleries and artists, we are too many. The strongest galleries and artists will survive. I do believe in galleries, I like to work with them, I think it’s a mutual positive relationship. Now a lot of people contact me through social media but I’m very loyal. If someone comes to me I normally ask where did that person saw my art and redirect them to the gallery if that’s the case. Something else the artist needs to do is to sell to the same price your gallerist does. If you don’t have representation at a certain moment I sell the pieces exactly the same price that the galleries. If you sell cheaper what’s the point for the galleries to survive. The artist has to be an artist and not an art dealer but we need galleries to invest in artists too. There has to be a mutual respect we have to respect galleries but also we have to pick the galleries that are investing on us: in publications, in production, guaranteeing us some bread. I can’t expend a lot of money into a piece that then a gallery won’t be able to sell». 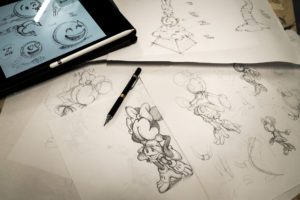 «Italy is my place to experiment with ideas. Here I have the way to do it with my facilities and my studio and LA is more about doing my one of a kind pieces, thinking, sketching… I have plans to go back to LA, but still the situation is pretty controversial there, everything is closed, people are not interacting much, so I felt kind of isolated there. The Covid situation changed pretty much everything, before I was just coming to Italy once a year but I don’t want to see my family only once a year. Even if have my family here everything is so flat, there’s not excitement. LA has a very young society so there’s a lot of creative people, there’s a willing mentality, it’s very inspiring, so much energy, so many gatherings! Me myself I was preparing this dinners at the studio ‘Feed-ia’ where I would invite collectors, artists, curators… I feel cherish and cuddled by the family here in Italy but I don’t feel so inspired anymore. I hope LA will return to what it was before, this needs to past, but I will go back».