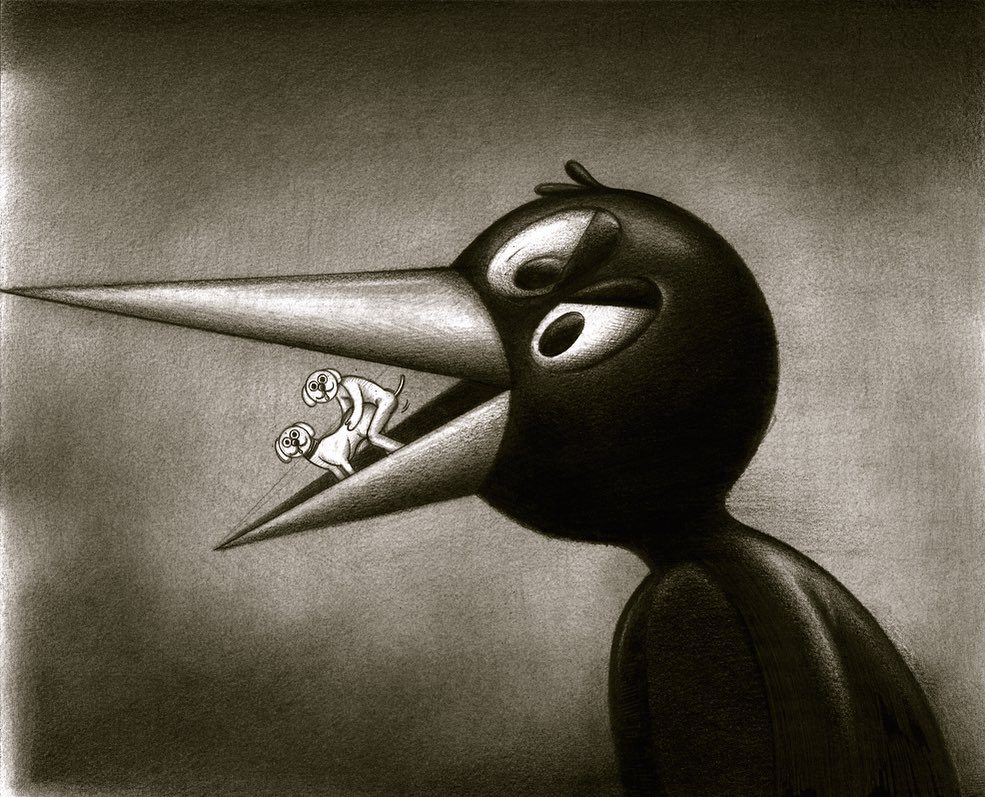 From wild beasts to cute little kittens today the protagonist is the animal world. The animal as a powerful and energetic being, as a bridge to talk about more complex issues such as politics or used as a humorous resource. Tigers, dogs, wolves, horses and sometimes fantastic creatures occupy the canvas of these five artists, each one making use of their personal style and aesthetics, and they act as a thread sometimes characterized as a cartoon, others as pure natural inspiration and others as a creator of global consciousness and harmony between society and the planet in which we live. We take this opportunity to review the trajectory of these five artists and follow their most recent work. Let’s catch up! 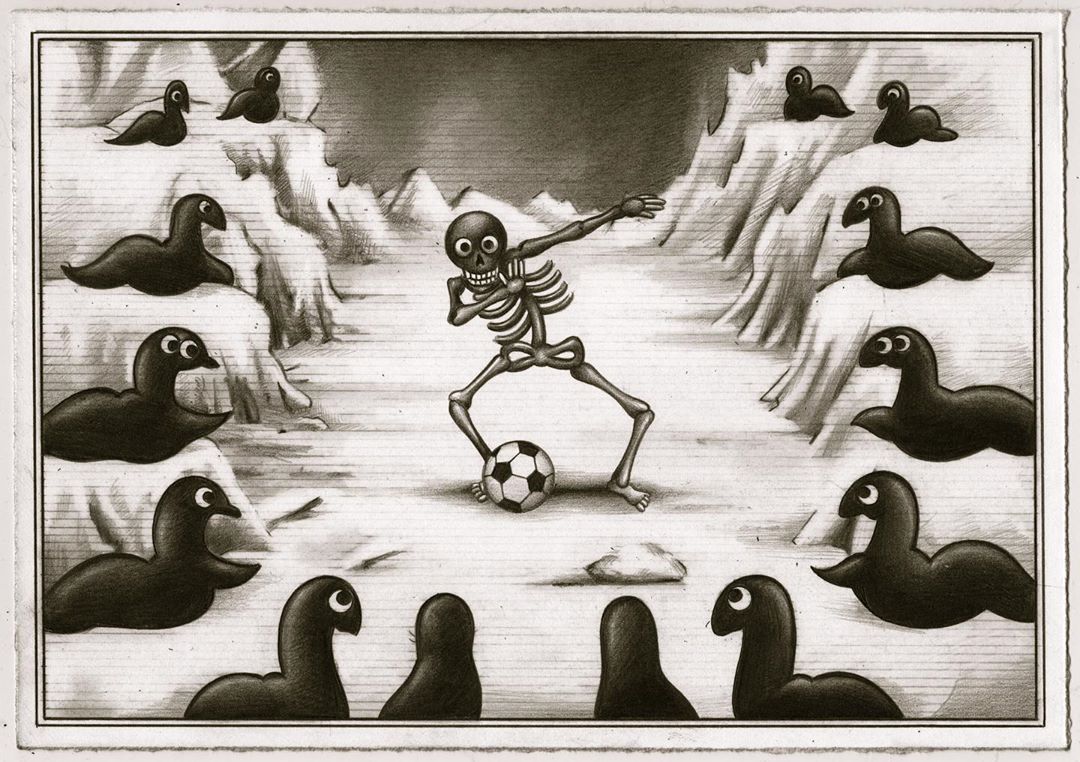 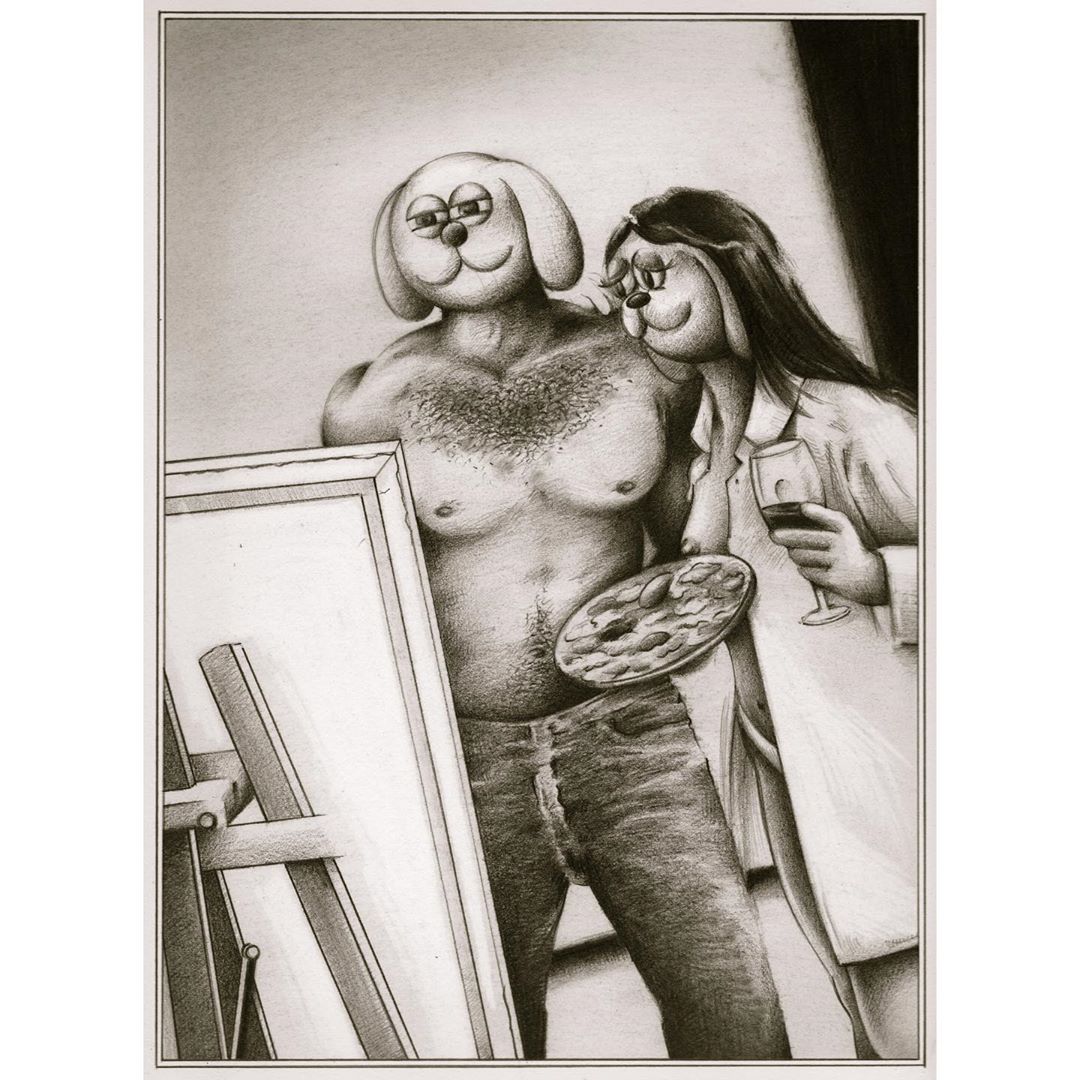 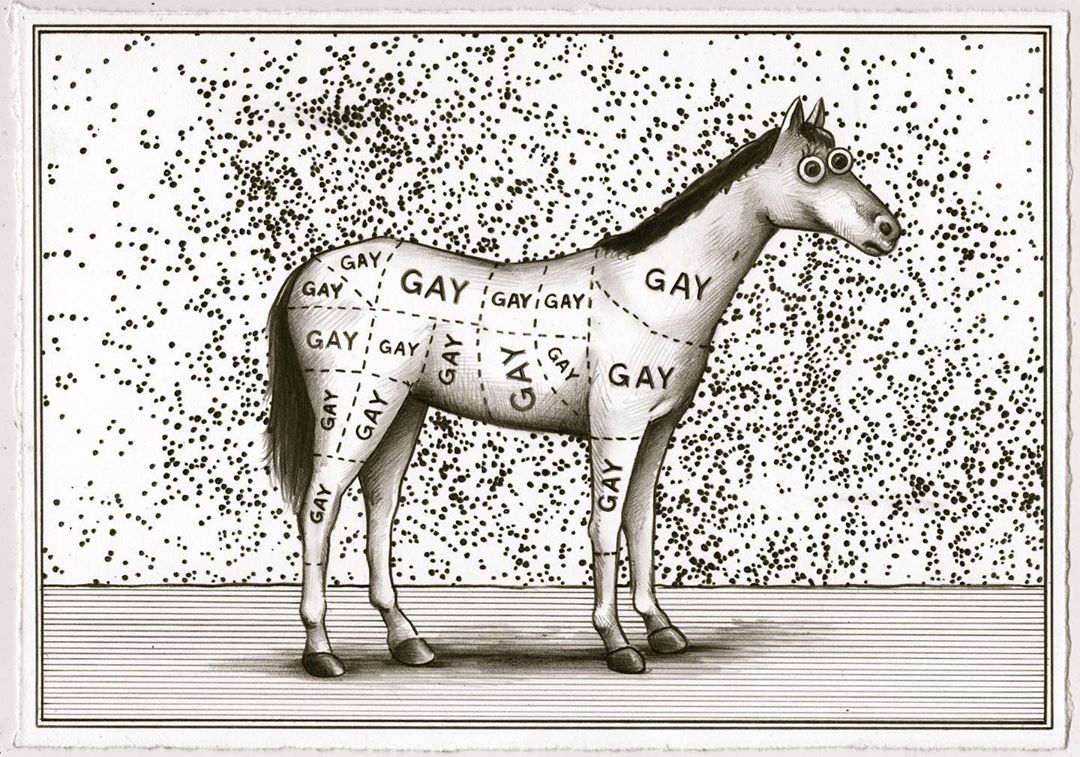 Characters that seem to come from a cartoon series from the 20s, pop influences, humor and irony in equal parts and a characteristic vintage aesthetic. The works in black and white, made with graphite by the Californian artist based in Chicago Ryan Travis Christian (Oakland, 1983) unite an infantile aesthetics with a sinister touch that at times transports us to a quirky American Wild West. Themes such as immigration, class, depression and the American dream are part of his caricatured work. Ravens, horses, cats or fantastic animals are the protagonists of Ryan Travis Christian’s work, that he has exhibited in galleries including the Museum of Contemporary Art in Raleigh, The Hole in New York and Guerrero Gallery in San Francisco. He’s works has also participated in international auctions and he has frequently collaborated with Case Studyo to bring some of his characters to 3D life in limited editions. WOAW Gallery in Hong Kong recently opened a group exhibition where he shows his work along with names like Roby Dwi Antono or Ana Benaroya. 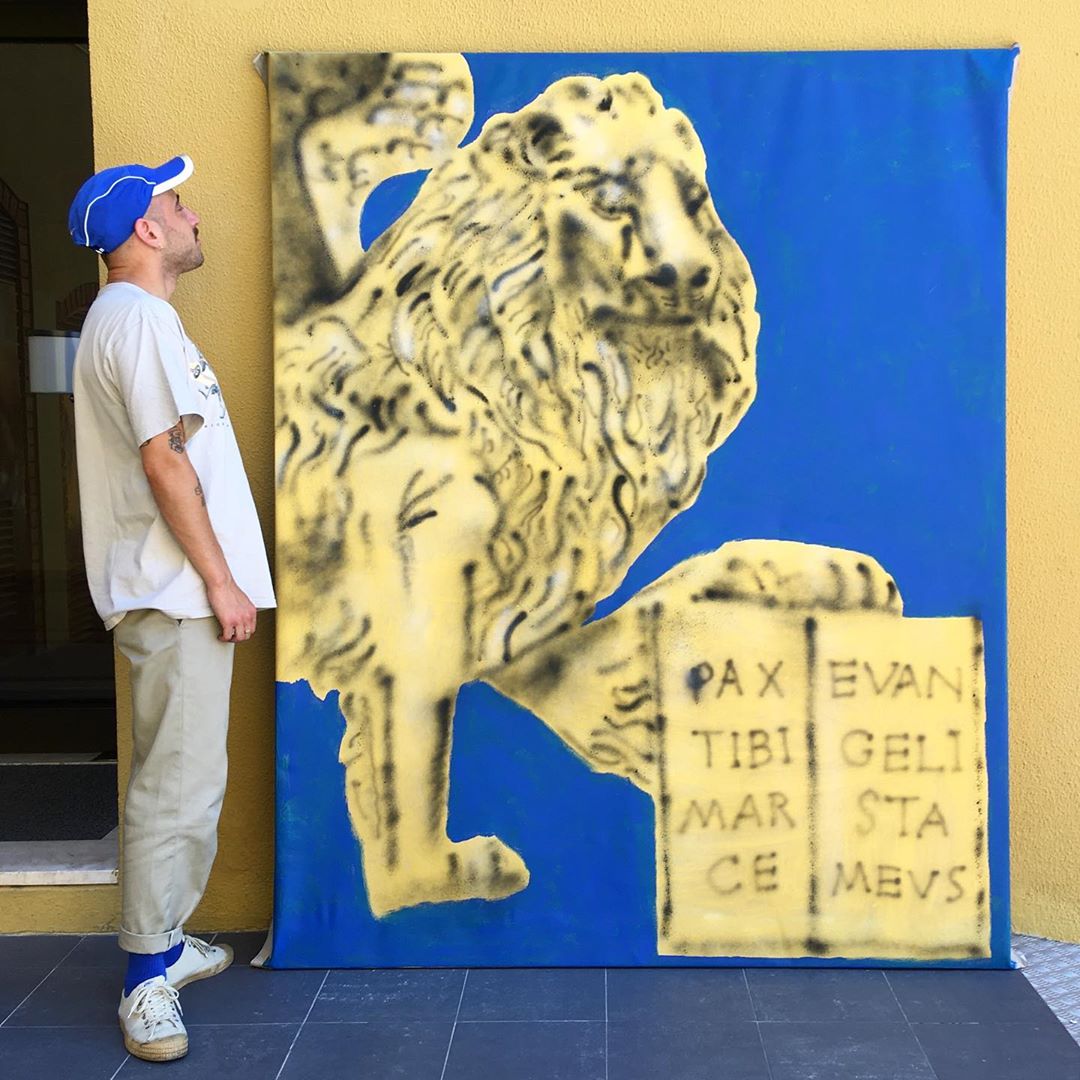 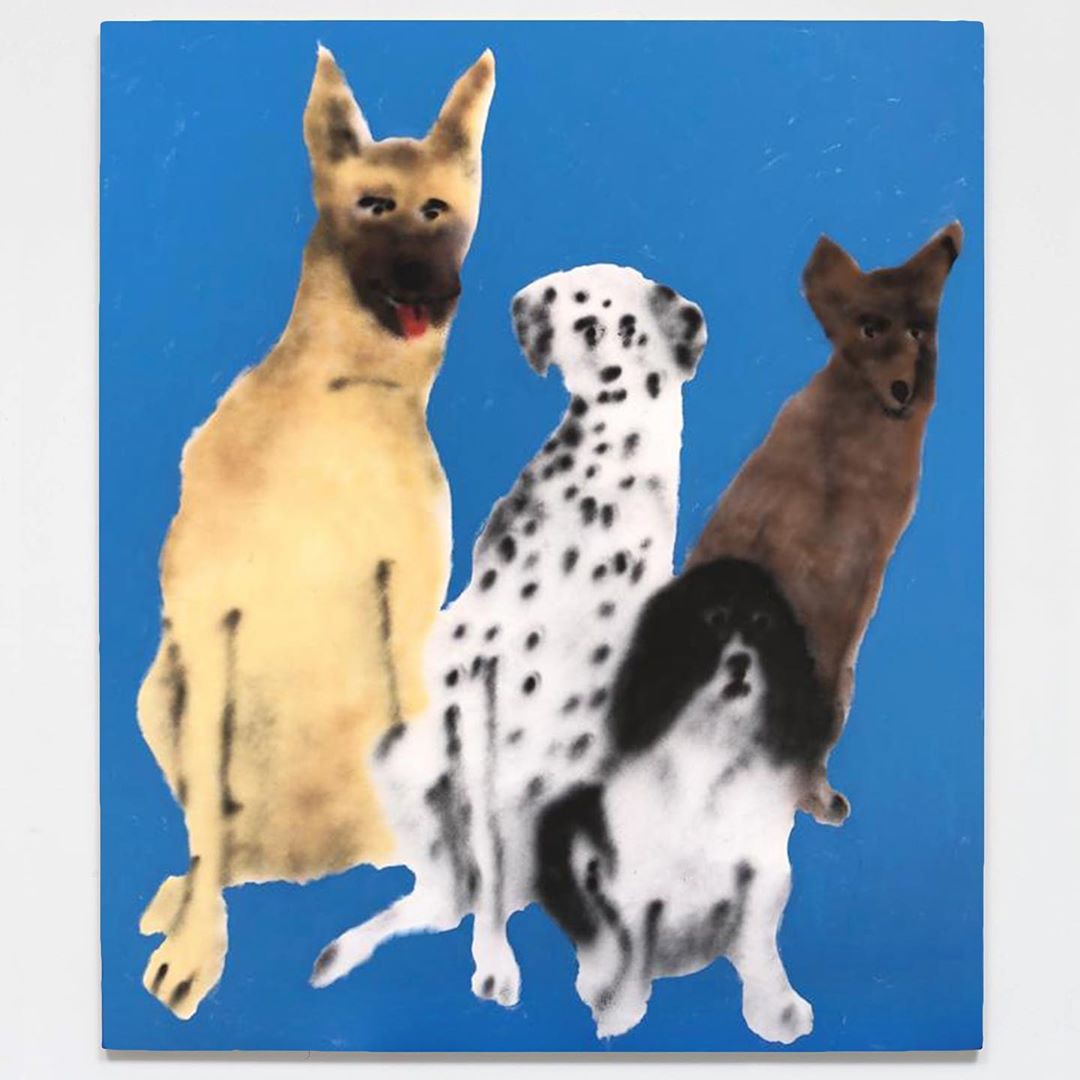 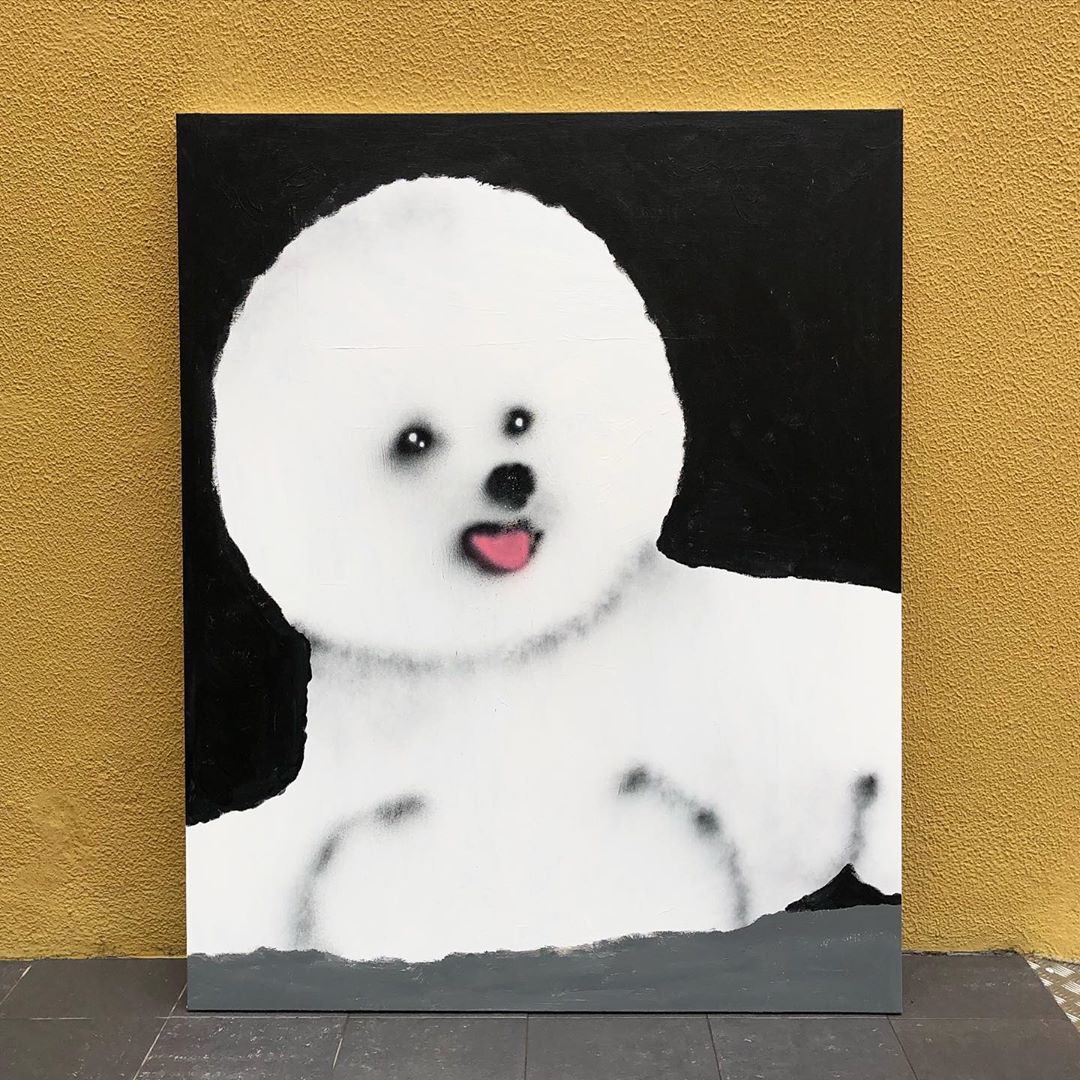 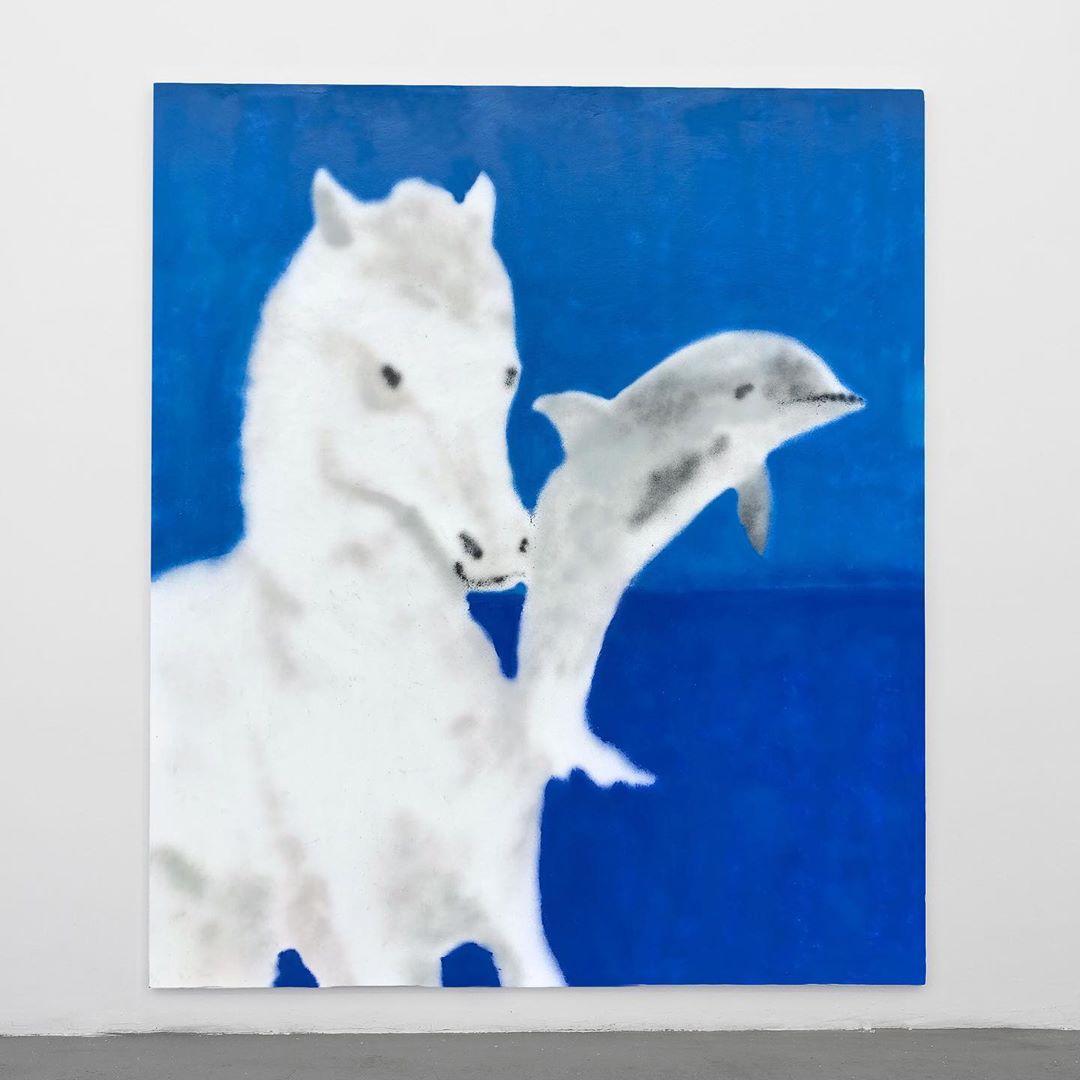 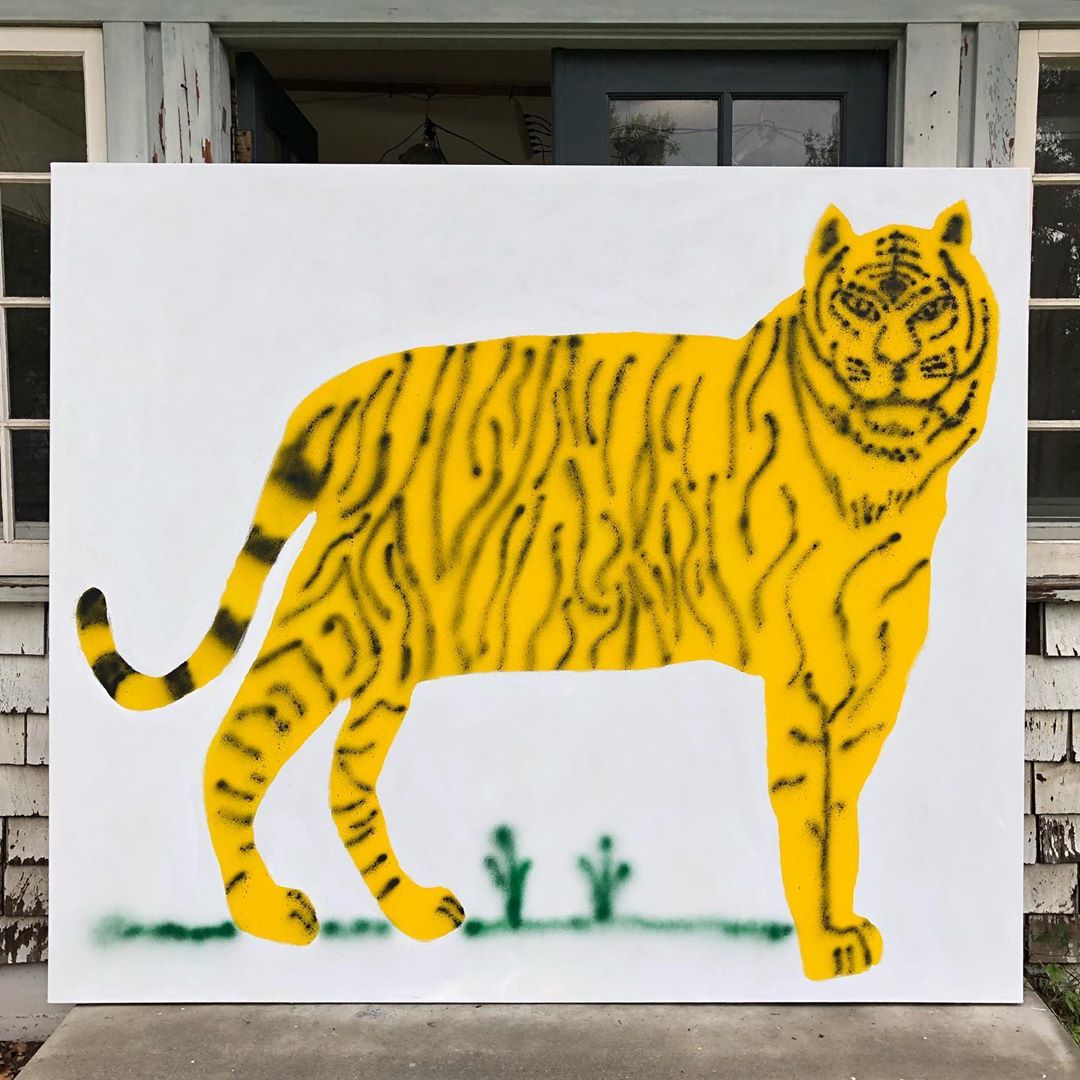 Plastic bags from big department stores such as LIDL, Tesco or Ikea were one of Ricardo Passaporte’s (Lisbon, 1987) first obsessions when carrying his personal imagery on canvas. So were the sales clerks of these stores, with their respective uniforms, and the shopping catalogs, which have ended up filling the walls of galleries in Europe with a recognizable spray-on-canvas technique. With a fascination for logos and consumerism, linked to pop culture, a strong sense of humor and a pinch of satire, Passaporte ends up appropriating these logos taking them to his personal language. It has been in the recent times that he has taken a turn and it has been the animals, and especially our canine friends, who have ended up being present all over his work. Under the name “If dogs don’t go to heaven, I want to go where they go” Passaporte inaugurated a few weeks ago his last exhibition in Palma de Mallorca at L21 Gallery. Aesthetically located between graffiti and Contemporary Art, he defends that his practice in the work he presents in galleries is not an “improvement” of his graffiti pieces and tries to distance them, even though the use of sprays acts as a common denominator. From a certain distance from the canvas, he uses it on his work allowing him to play with textures and gives him a (wanted) lesser control over the piece, which leads him to make mistakes and to unexpected surprises that he uses in his favor. Stains of color and carefully studied strokes create the dog figures of his most recent work. Keep an eye on his work! 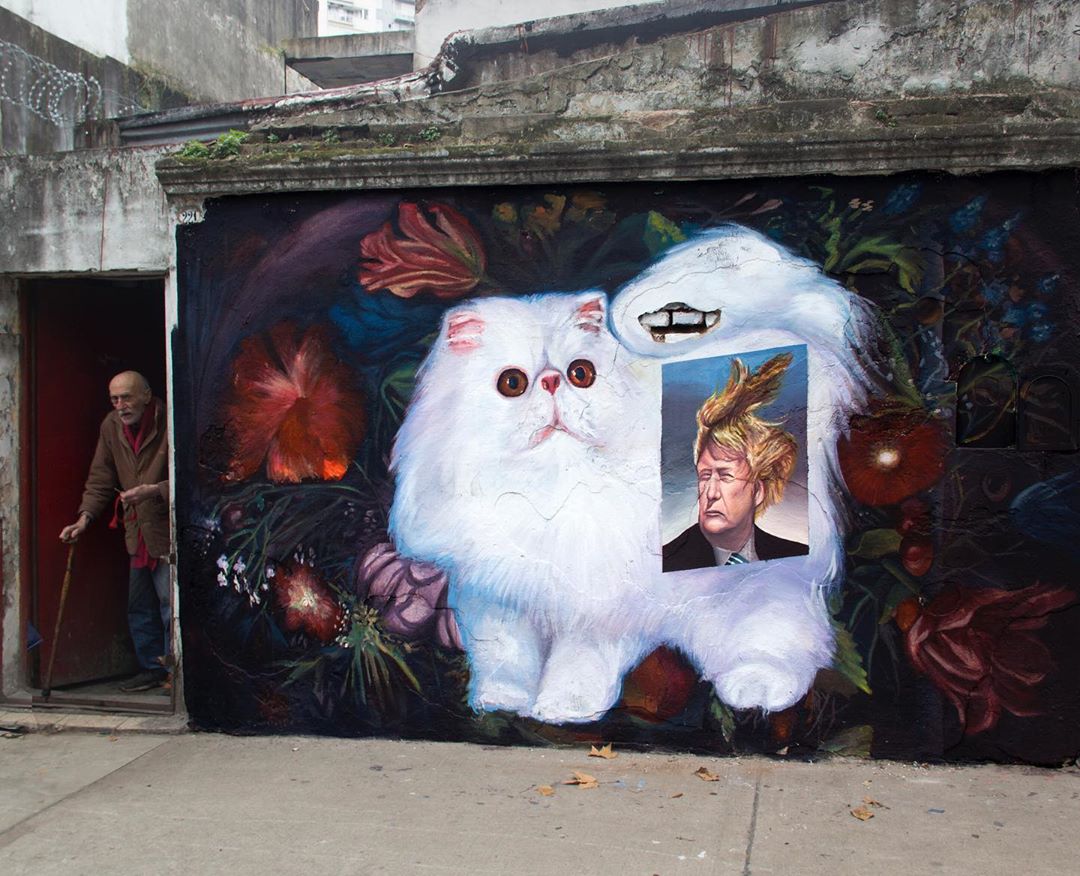 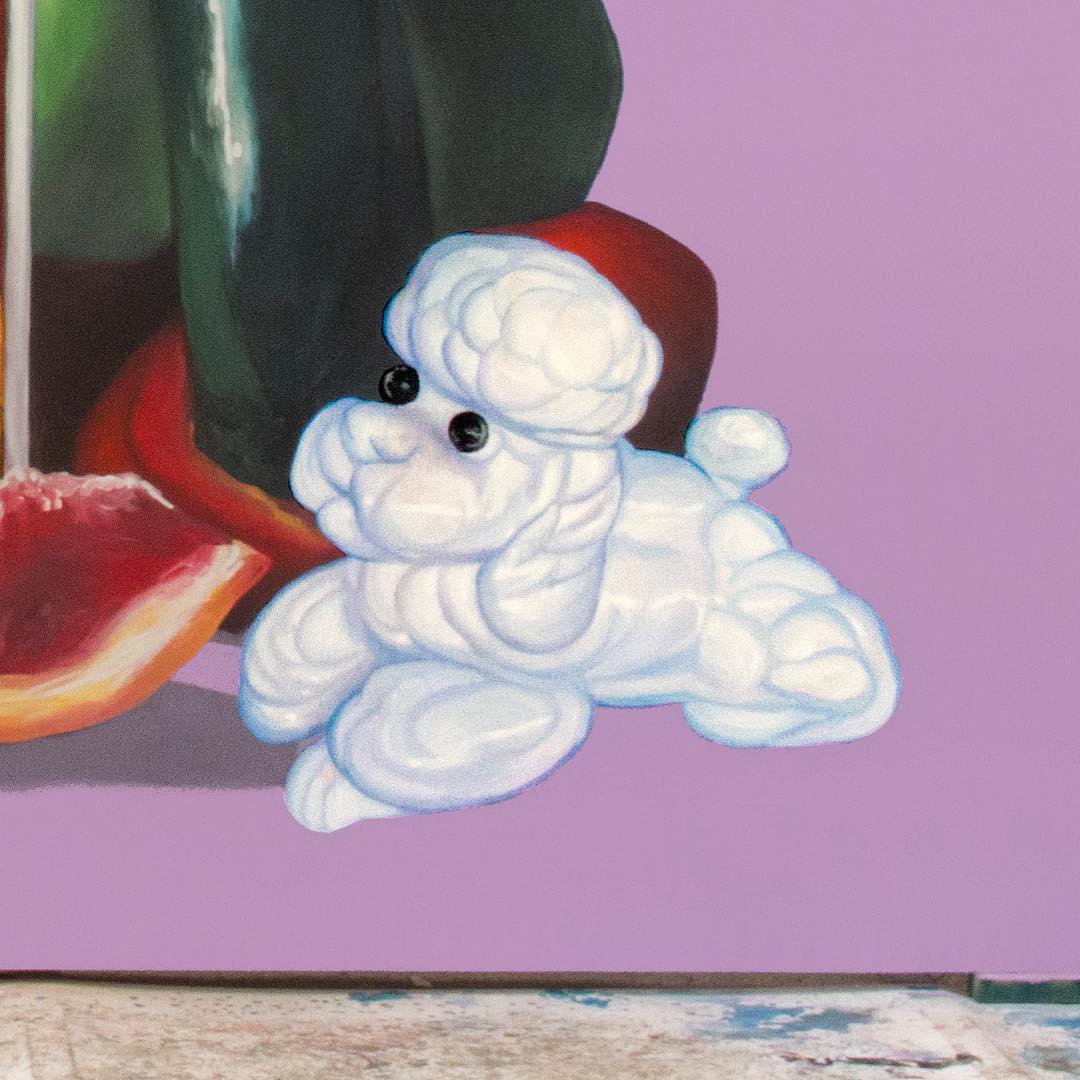 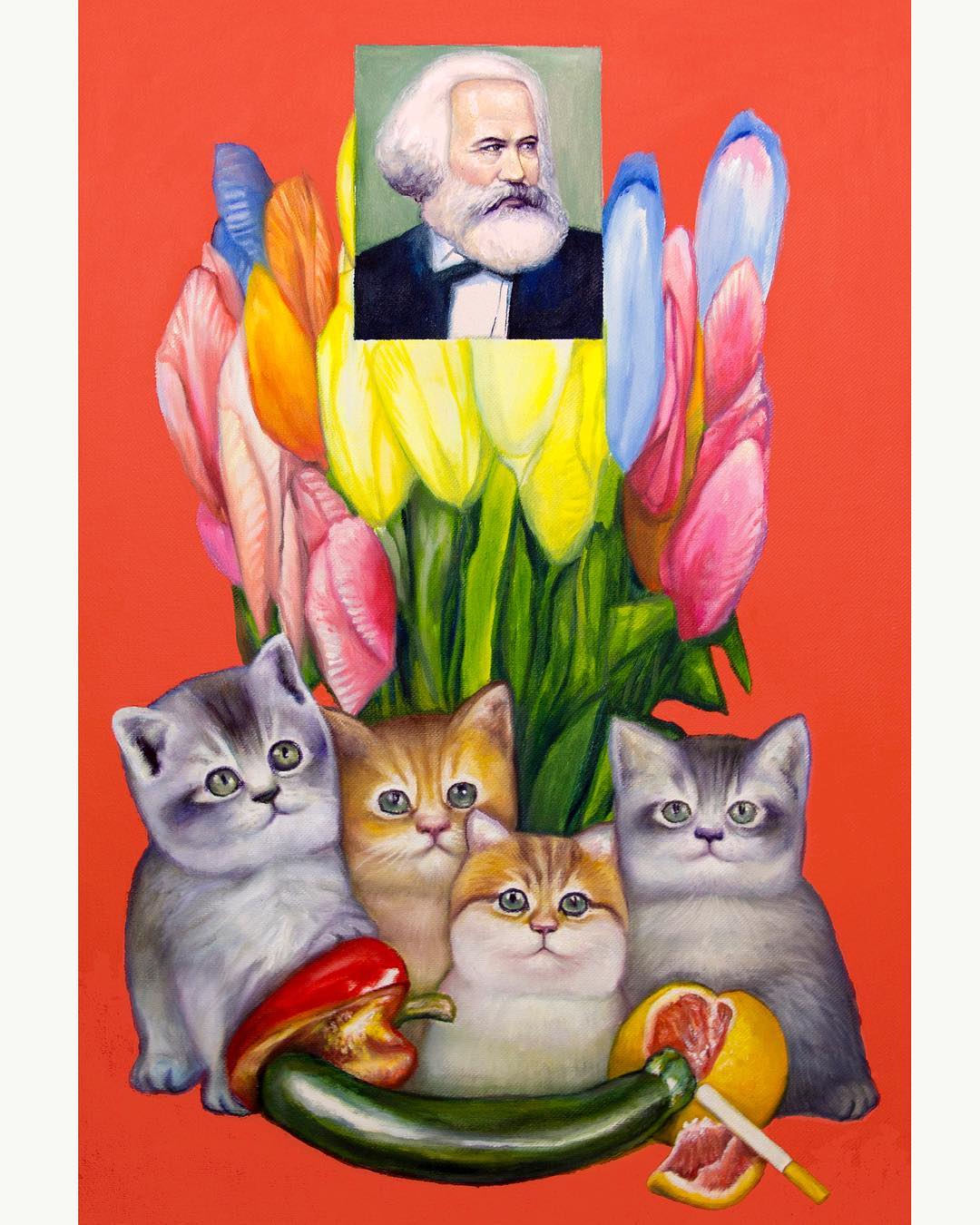 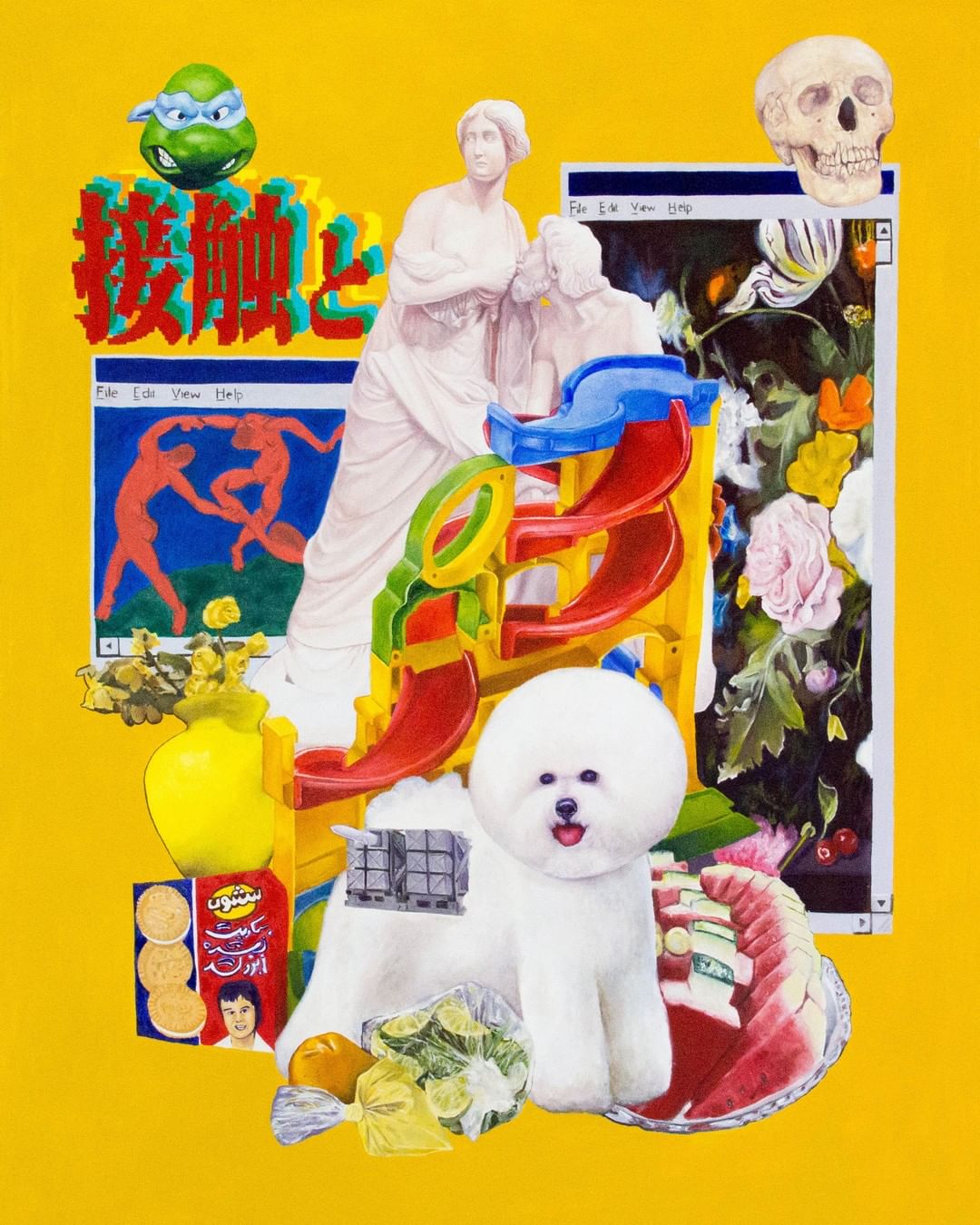 Nicolás Romero (Buenos Aires, 1985) started twenty years ago now, signing Ever and doing graffiti throw ups in the streets of his native Buenos Aires. After several years of experimentation along with other artist colleagues he moved away from graffiti to start developing a muralism work that has evolved greatly in the last decade. From a work that represented recognized personalities from whom streams of color emanated and with whom he played with their symbolic charge in the public space, to his “Still Life” work, that he has been developing in recent years and where he has found another way to use the image as a social reflection. Among flowers, vegetables and other objects, kittens and poodles stand out: «At first I started using animals because I was interested in them as a bridge to talk about things that were a little more complex, such as politics. For me they symbolize a resource to talk about deeper realities in disguise», he says when we talk about the use of animals in his most recent works. «I also use them as sources of neutralization of images with different information. A few years ago I read a report on kittens on the Internet called “Emotion Regulation, Procrastination and Watching Cat Videos Online” in which it said that people felt in a better mood and with much more energy after watching a video with kittens. It also said that there was a mixture of guilt and pleasure, a behavior very typical of the consumption of certain content on the Internet. So I was wondering what would happen if I combined kittens and politics», he continues. The most recent result can be seen at the end of November in the solo exhibition he’s preparing at Ochi Gallery in Los Angeles. 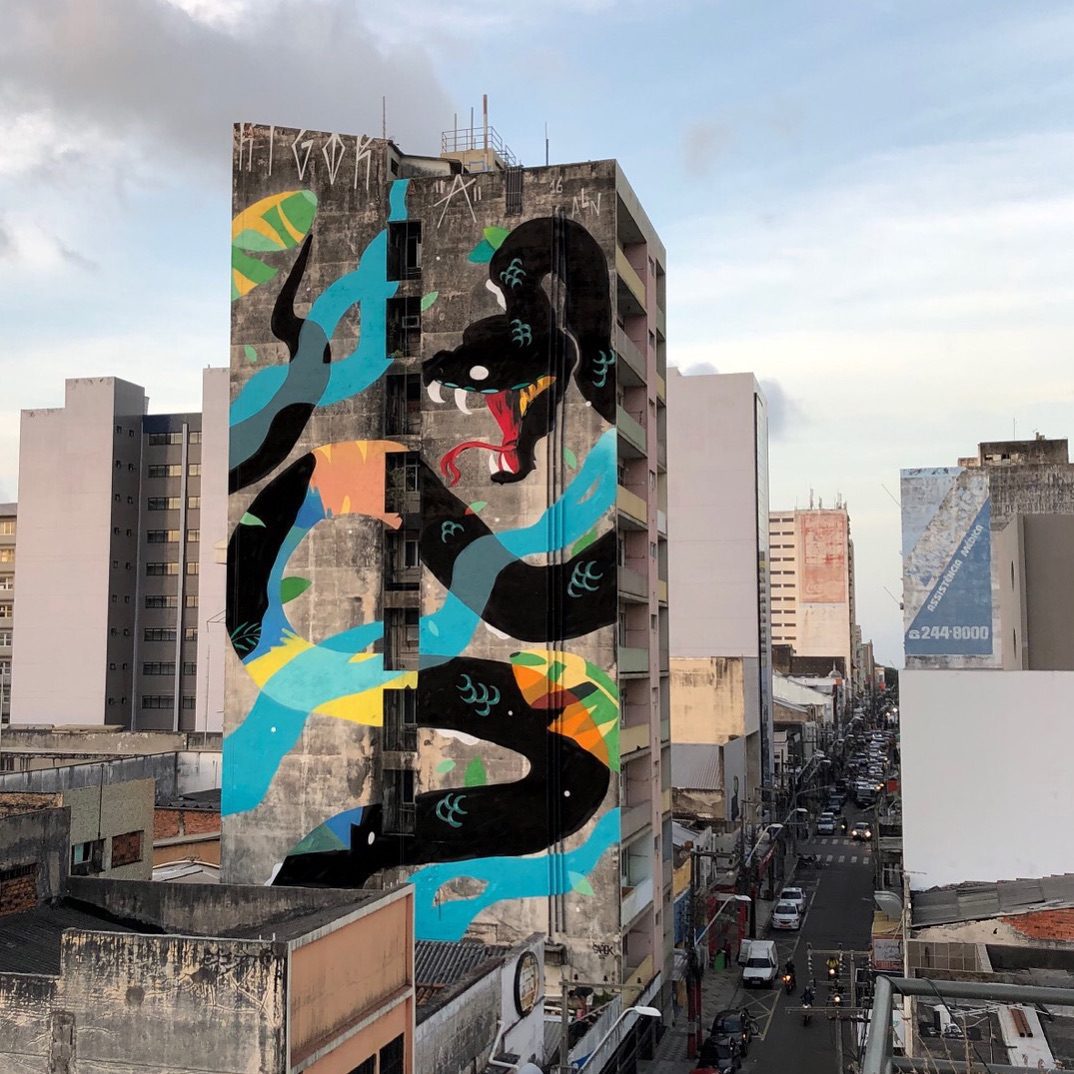 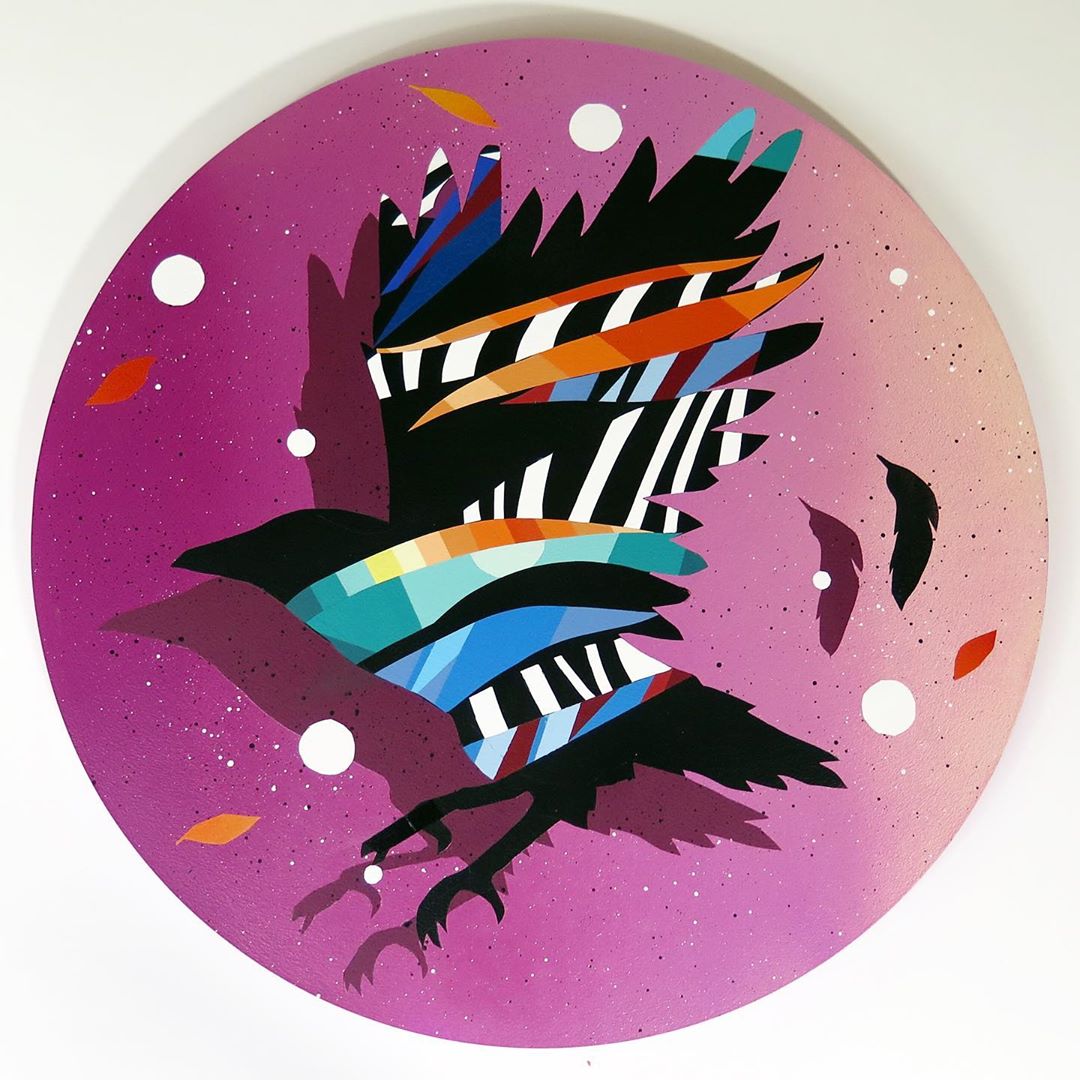 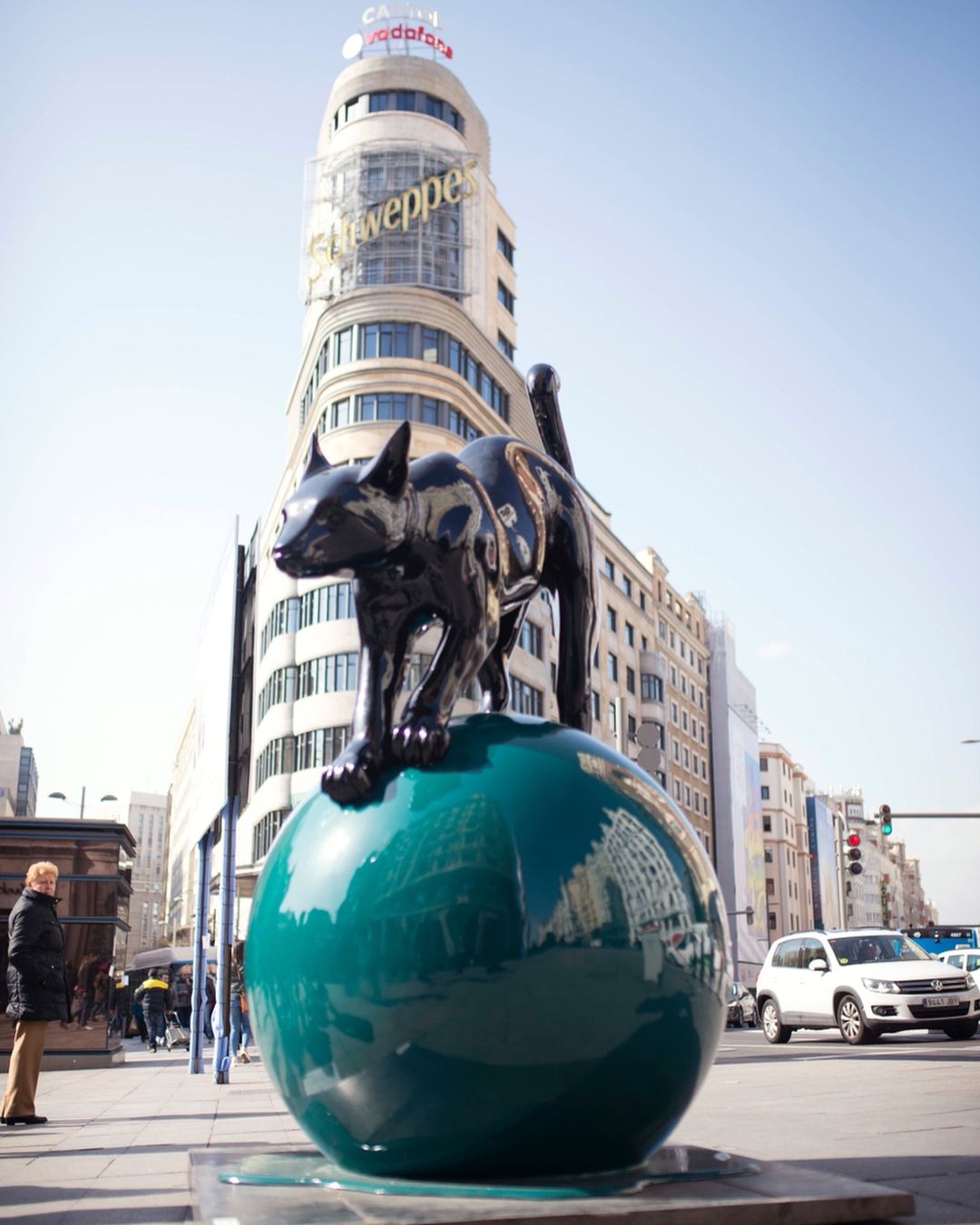 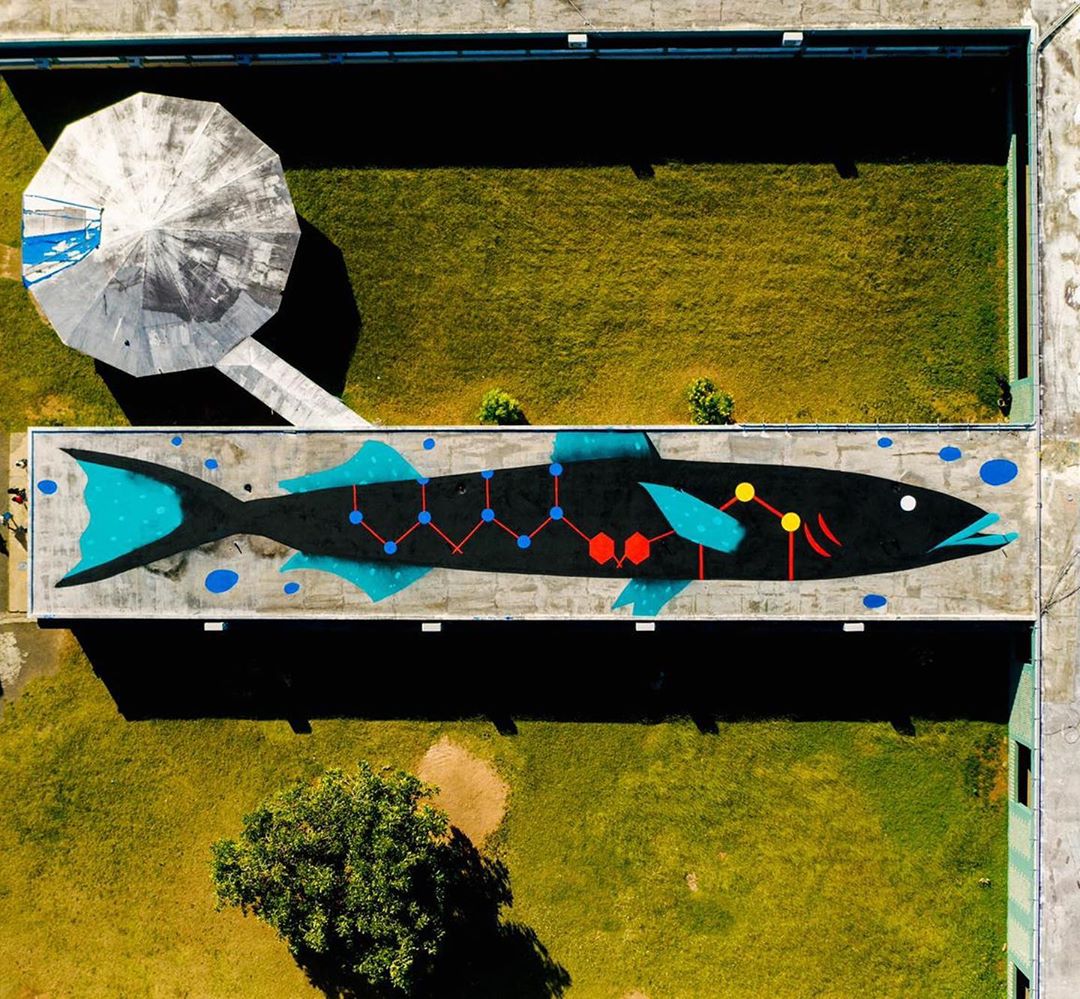 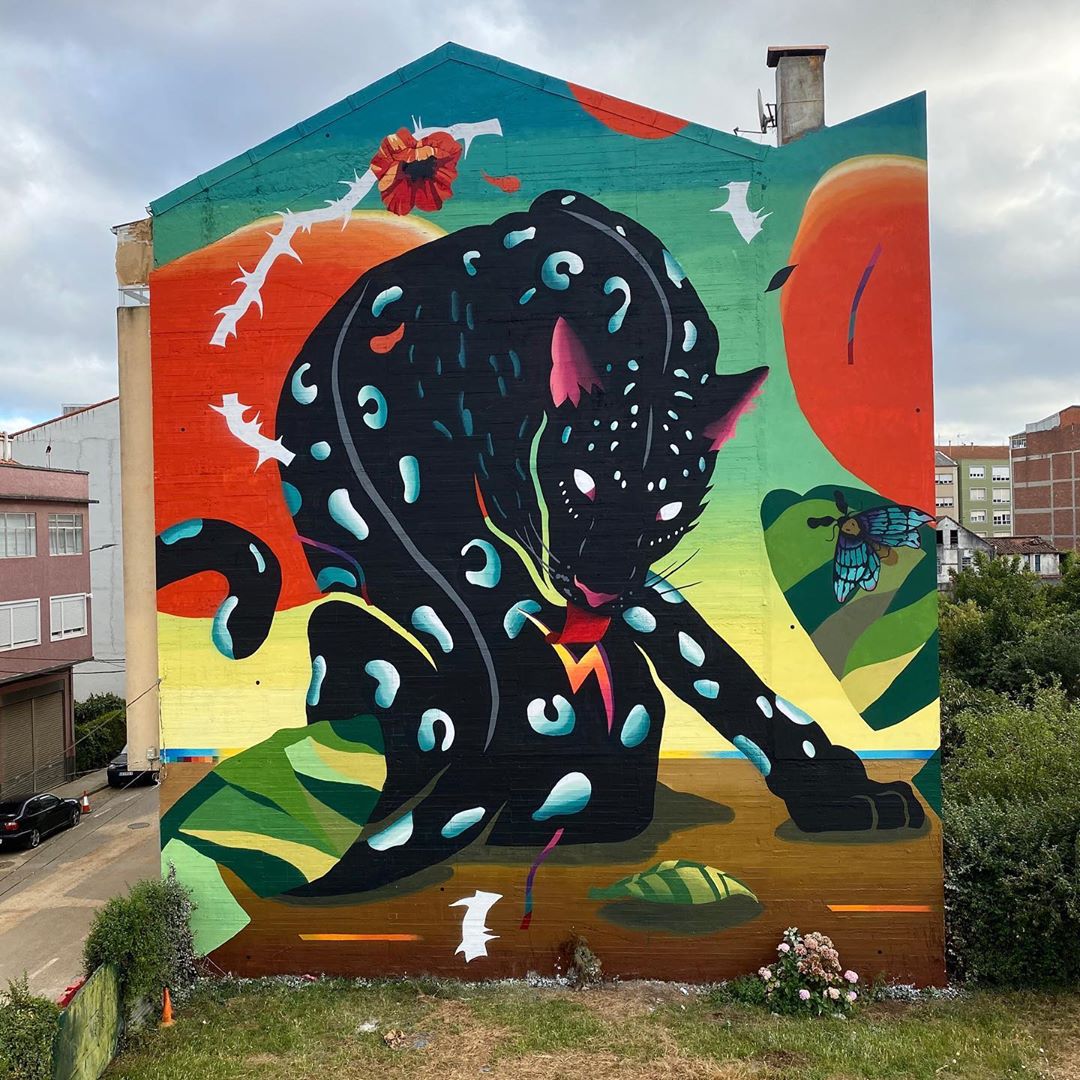 Animals and the color black are his trademark. Cats, tigers, wolves, panthers, snakes and other powerful birds are the main characters in the murals, installations or artwork he develops in his studio. «I’ve always used animals in freedom, strong and noble animals that instill a sense of respect to try to give visibility and rethink our relationship with the environment in which we live» says Sabek (Madrid, 1985). «With this I want to talk about the land that we have taken over impacting animal life. In the last 50 years a 40% of their natural environnement has been reduced, there’s almost no longer free spaces for them but perimetral areas that we have left so we don’t extinguish them», he continues. Sabek, who has been involved in the Madrid graffiti scene since he was a youngster, is an expert in finding that balance between the absence of color in black paint and the life and energy that radiates from his works. «My animals are usually black because it represent the shadow of the past, of what they used to be and the loss of energy and power that they used to have on the planet. Lately I’m bringing color and plots alluding to that hope if it’s not too late», adds the Madrid-born artist, who has been painting his animals in urban art festivals in Brazil, Argentina, the United States, Norway and Russia for years. 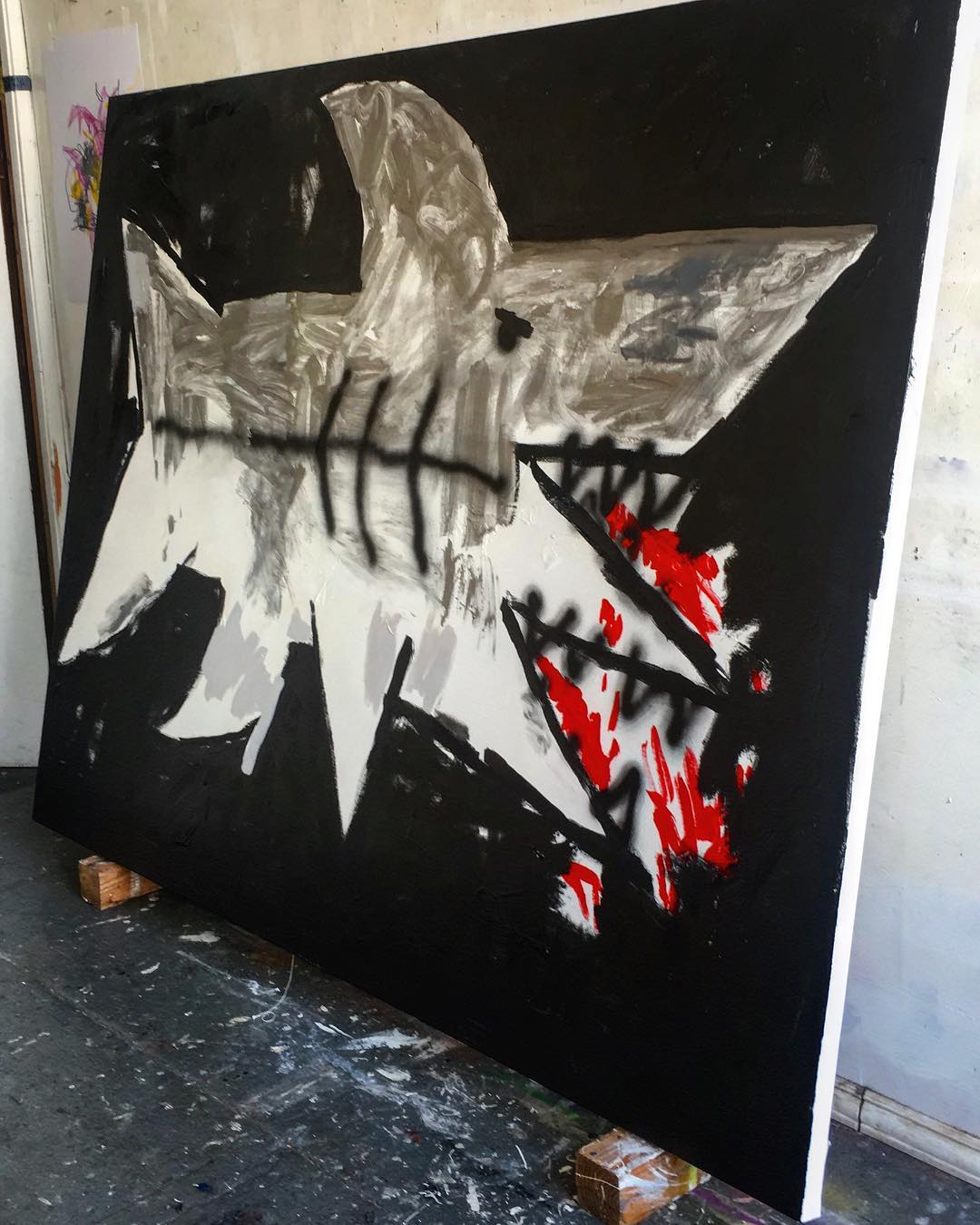 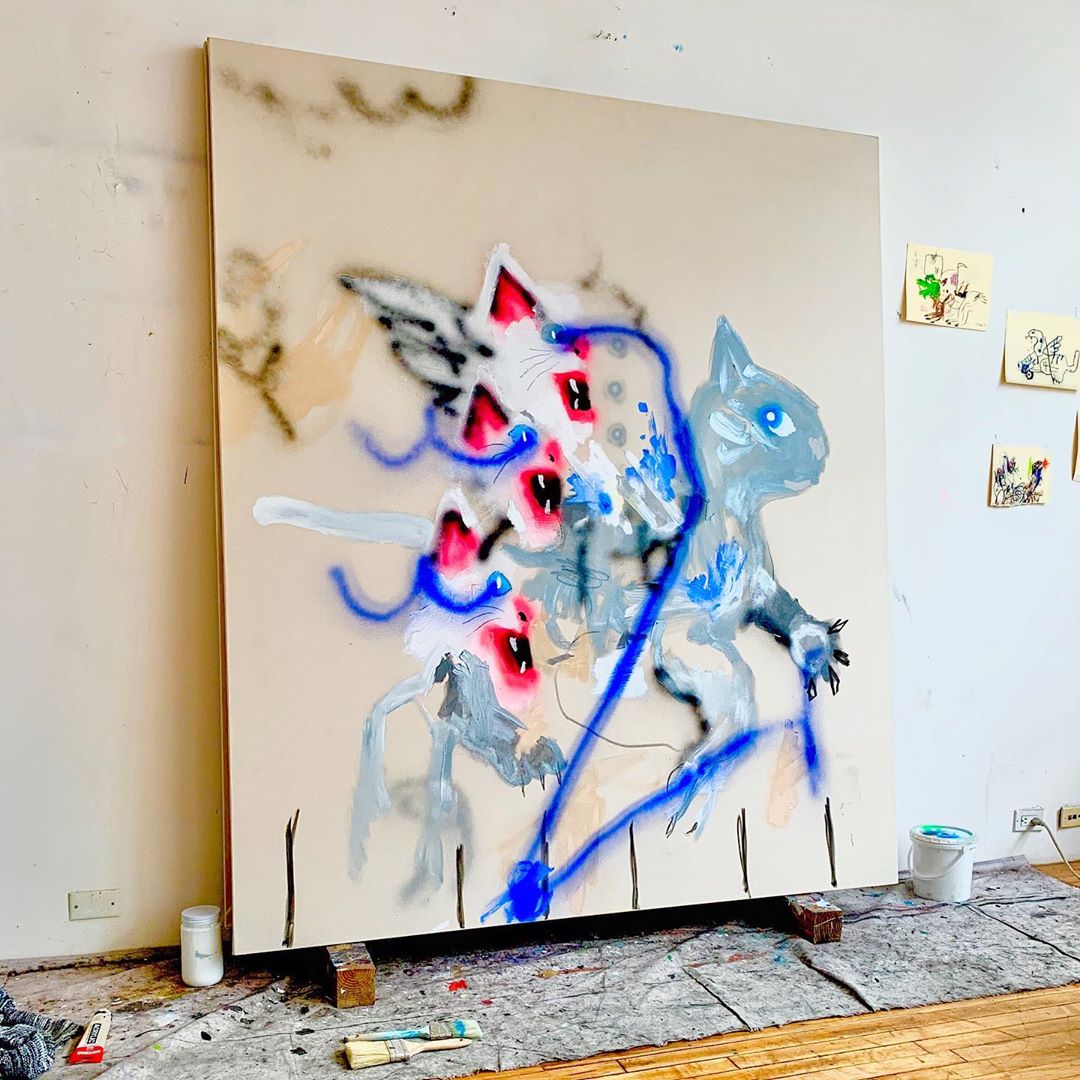 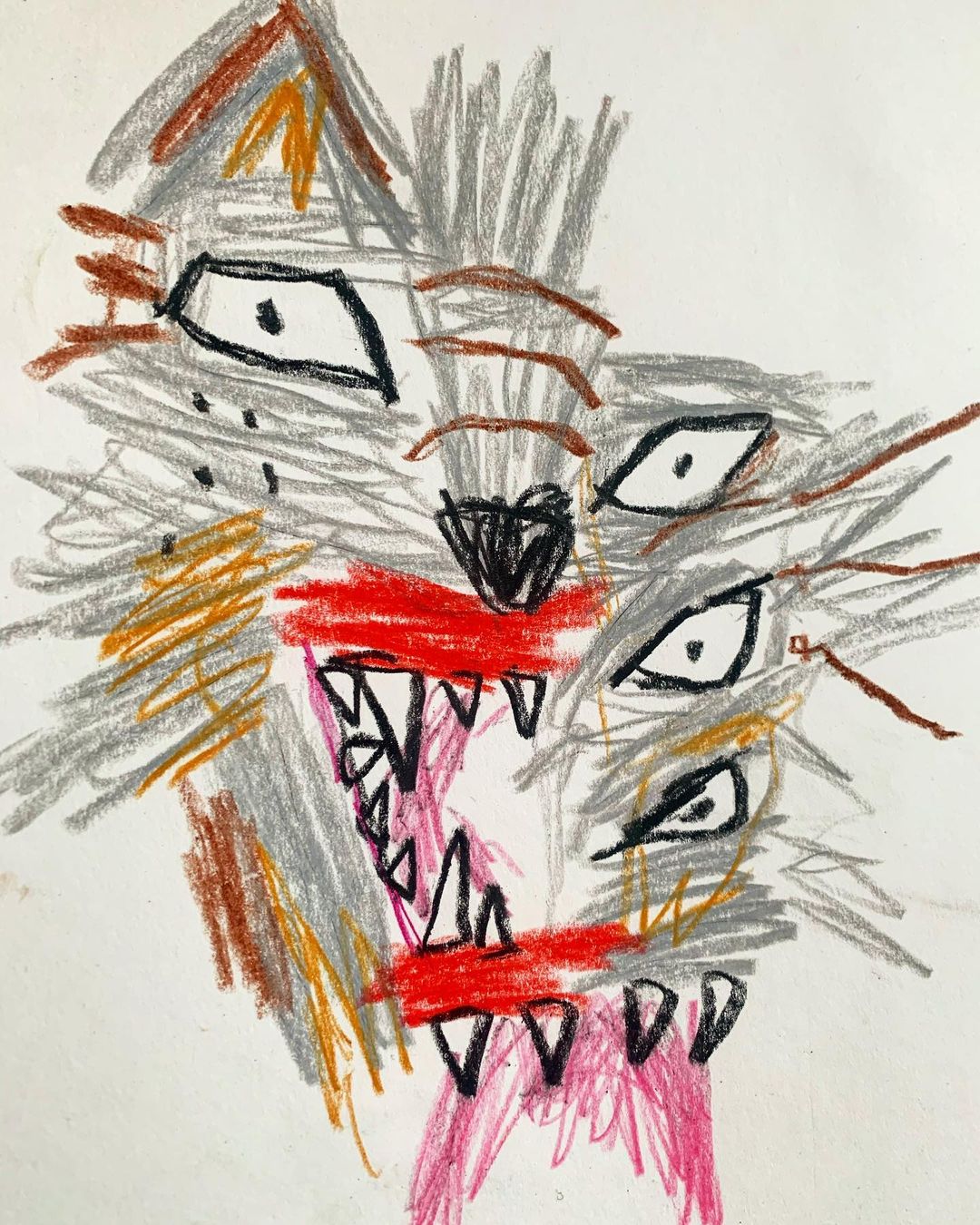 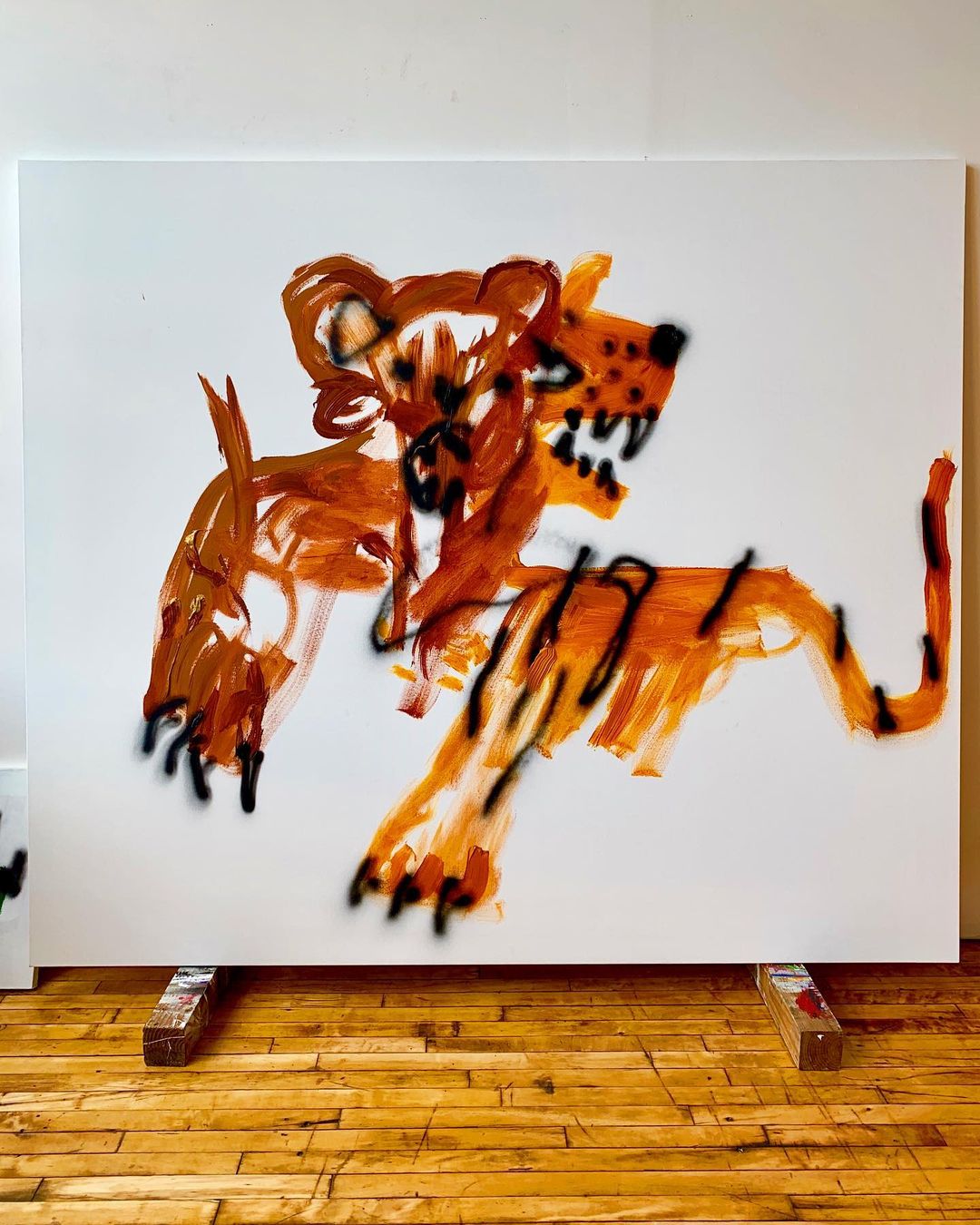 The creative impulses with which the American born artist confronts his works and the energy that flows from them reveal the rigorous work, which many might confuse as fortuitous, of Robert Nava’s wild strokes (East Chicago, 1985). Mythological creatures such as griffins and dragons fused with sharpen teeth animals such as sharks, crocodiles and wolves. Deceptively simple and with a complex combination of colors his works lead us to that confusion between depth and simplicity or almost naivety. Acrylic, oil bars, graphite and spray are combined with lines that represent a return to childhood, making the opposite path to the one we could imagine: from a 12-year old Rober Nava painting hyperrealism to freely scribbling all kinds of creatures to a point halfway between abstraction and creatures easily recognizable by everyone. Today his work is part of the collection of the Art Institute of Chicago and he recently opened his last solo exhibition at Sorry We Are Closed Gallery in Brussels which will run until the end of December.