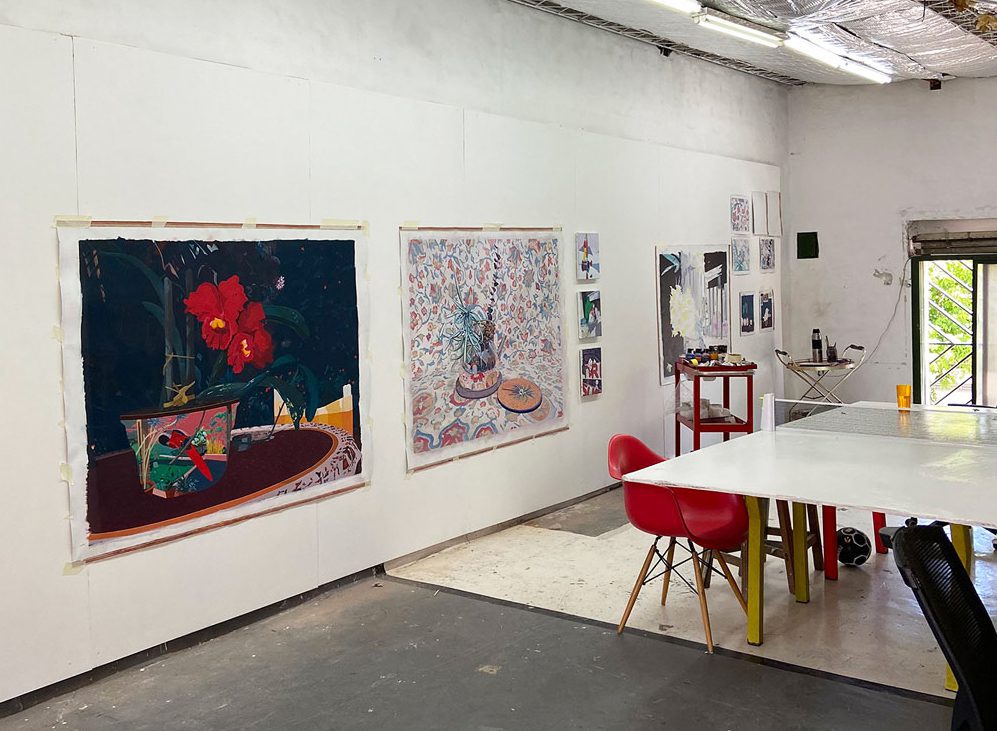 As a child he played in the Argentine professional soccer league but at 14 he broke his knee for the first time. By that time Francisco Díaz, known as Pastel, had already begun to paint graffiti on the streets of his native Buenos Aires and that injury, which kept him from practicing any sport for a year, made him turn to it. He ended up studying Architecture and in his constant analysis and questioning of himself and his professional development he found himself into three vital edges, soccer, graffiti and architecture, which happen to have one thing in common: the importance of approaching and conquer of the public space. Far from conventional architecture Pastel understands his work in the street as a system of urban acupuncture and through his murals he seeks to create a dialogue that is natural and respectful with the environment and its context. He uses the wild flora that grows in the cracks of the sidewalks and buildings as social symbolism, taking them to a mural scale as a critique of this colonizing idea of the city, of the uncontrolled advance of construction and of the over-construction of spaces. It’s through his studio work that Francisco Diaz builds a deeply personal space that collects through photography, places and elements very much of his own, that are mixed with the emotional memory of his Misiones roots. He invites us to enter his most intimate world, that of his studio, to show us his most recent work, other work in progress and to talk about these family roots, the act of painting as a personal therapy and his own understanding of human interaction with public spaces. Access the full conversation here. 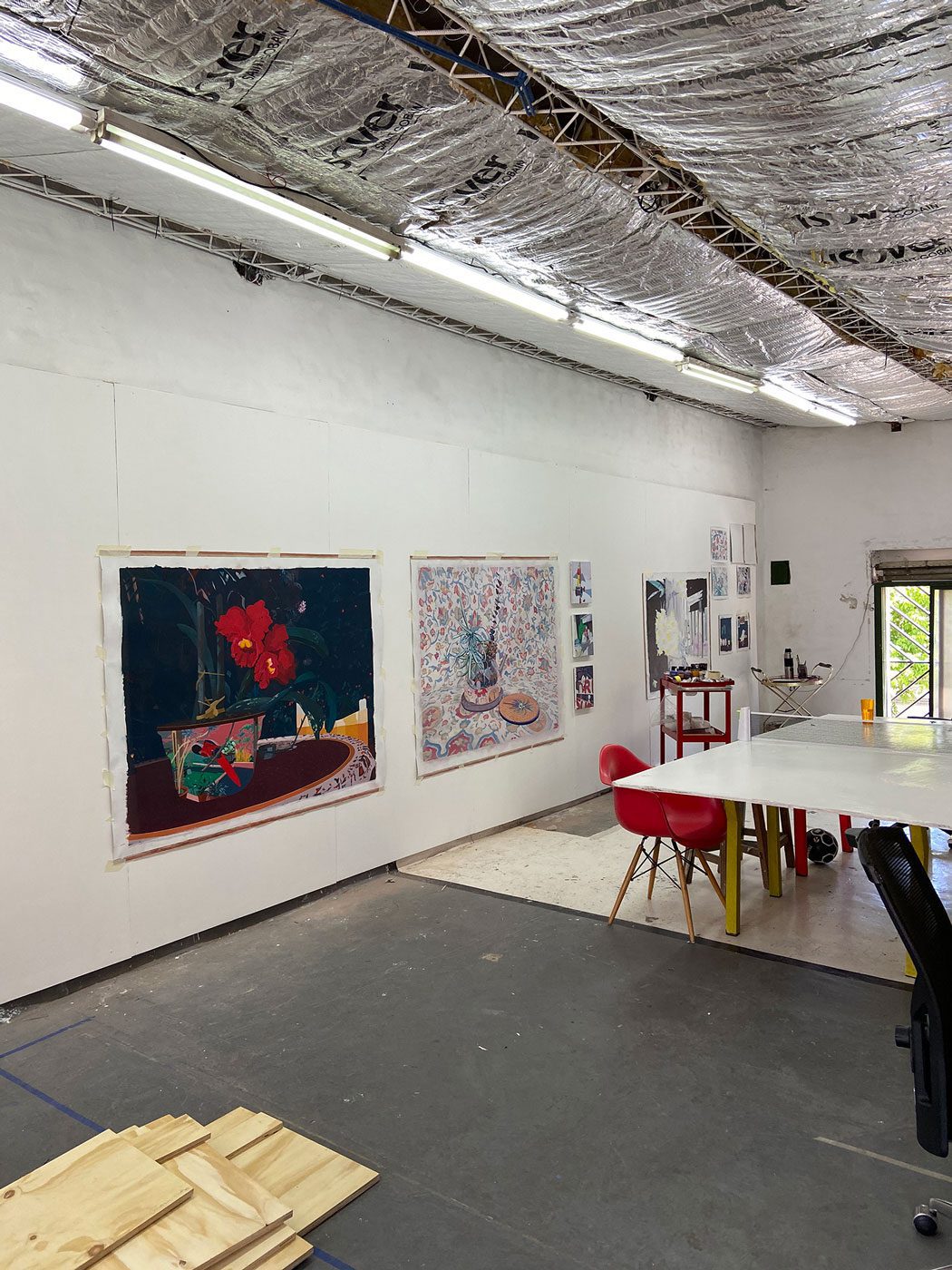 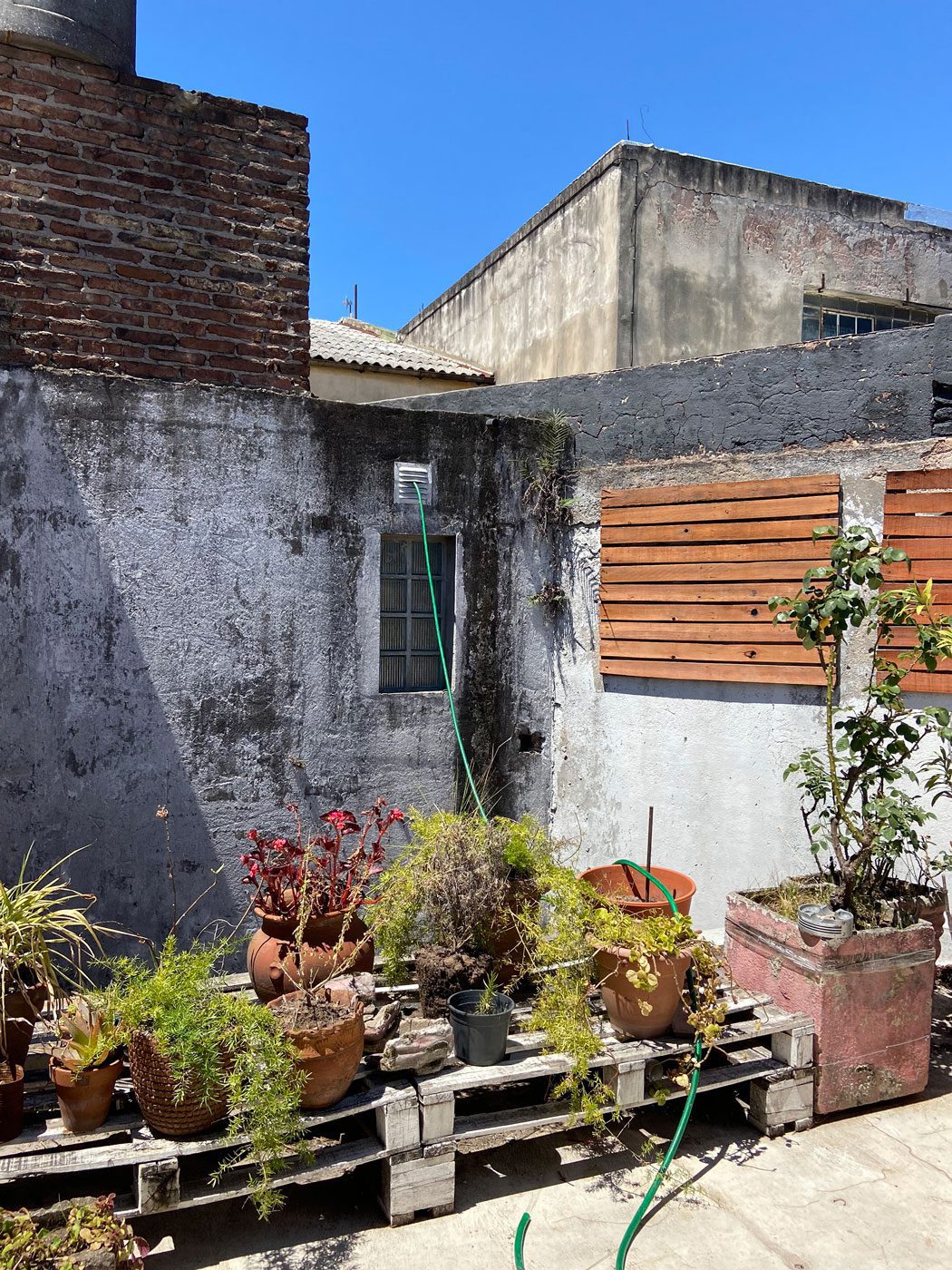 «This is the new studio we recently moved into in the Paternal neighborhood in Buenos Aires. It is an area that moves in between the industrial and residential and that seems to have no intention of gentrification, so it maintains the quality of a low-scale neighborhood and a close relationship with the neighbors. We moved from our studio in the city center but this place is much wider and we are very happy here. I share the space with Franco Fasoli who has just returned from living in Barcelona, an architect friend and a friend who designs virtual reality games, we have a little bit of everything. With Franco we have been sharing working space for more than ten years now, so we never have any problems when it comes to sharing. We moved in just before the pandemic so I took advantage of that time to be locked 24/7 producing work. Almost for a matter of mind control, to get away from all that madness that was going on out there. There was a lot of silence and it was good enough to find that feeling of re-inhabiting the workshop, which sometimes with all the travel one never ends up settling in one place». 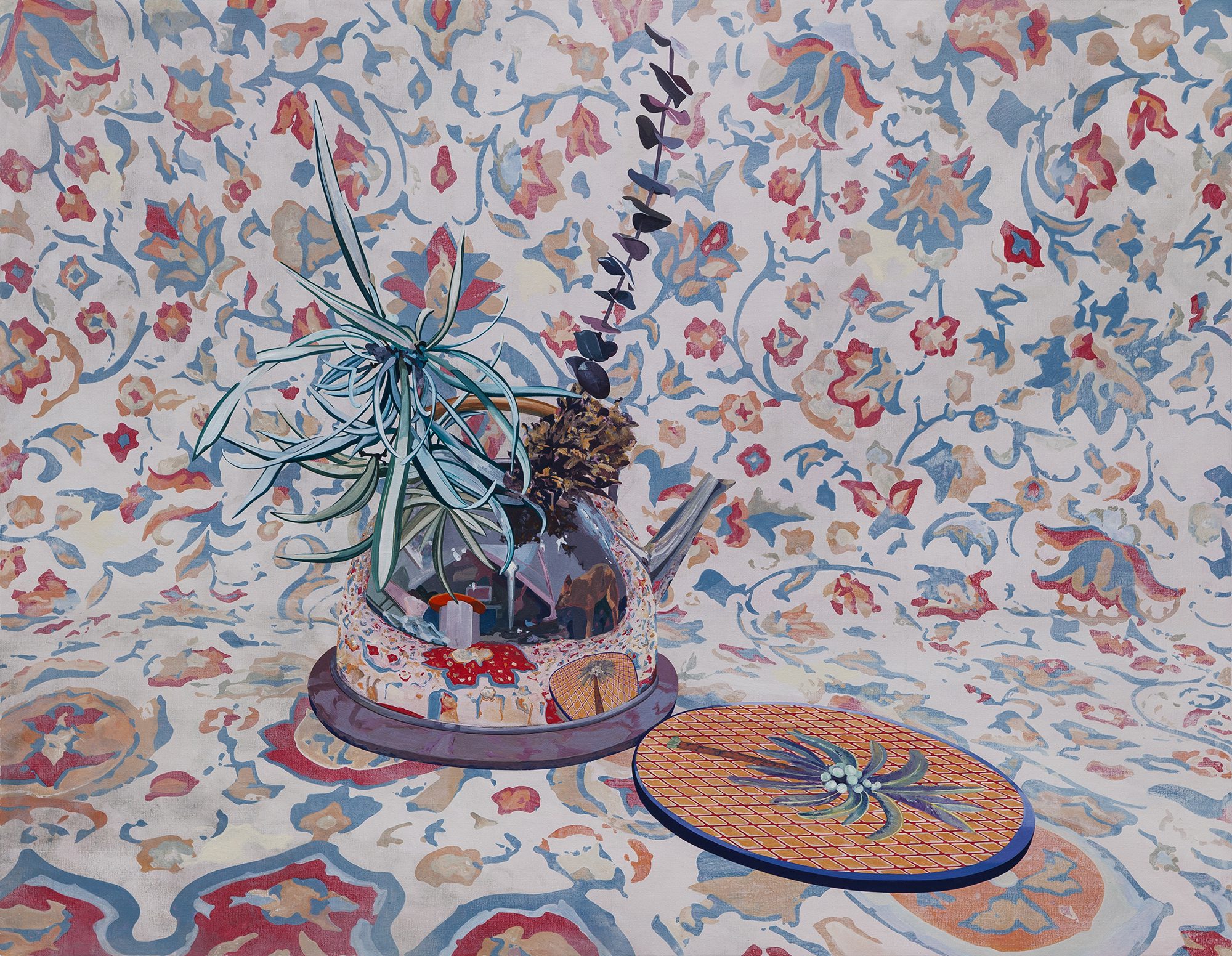 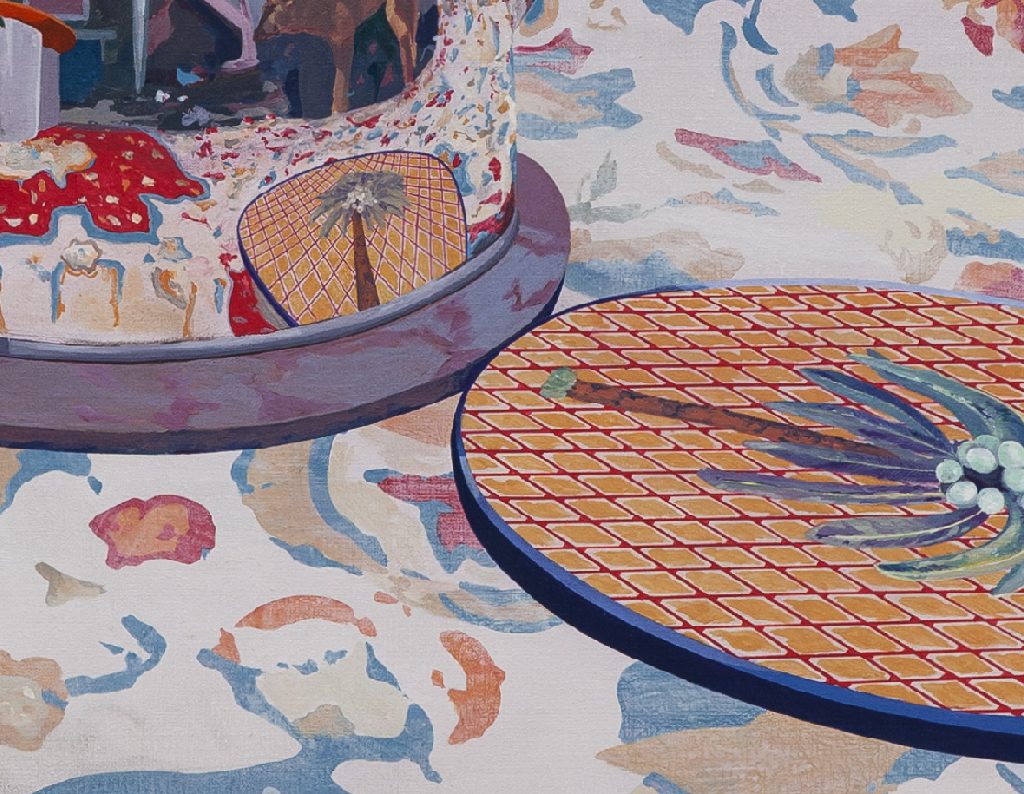 «My studio work is more personal and introspective, it comes from a demand of my own. Now I am working with a few pieces at the same time. I started this one (above), ‘Lazo’, in the middle of the pandemic, is a space inside my house with all very mundane elements that are at the same time very personal and build my day a day. It took me some time to produce it, my studio painting times are very different from those of the street. I want to discern it from my work in public space, that responds to a lot of conditioning factors of the work itself, understanding the work not only as the wall but the whole context that surrounds that work». 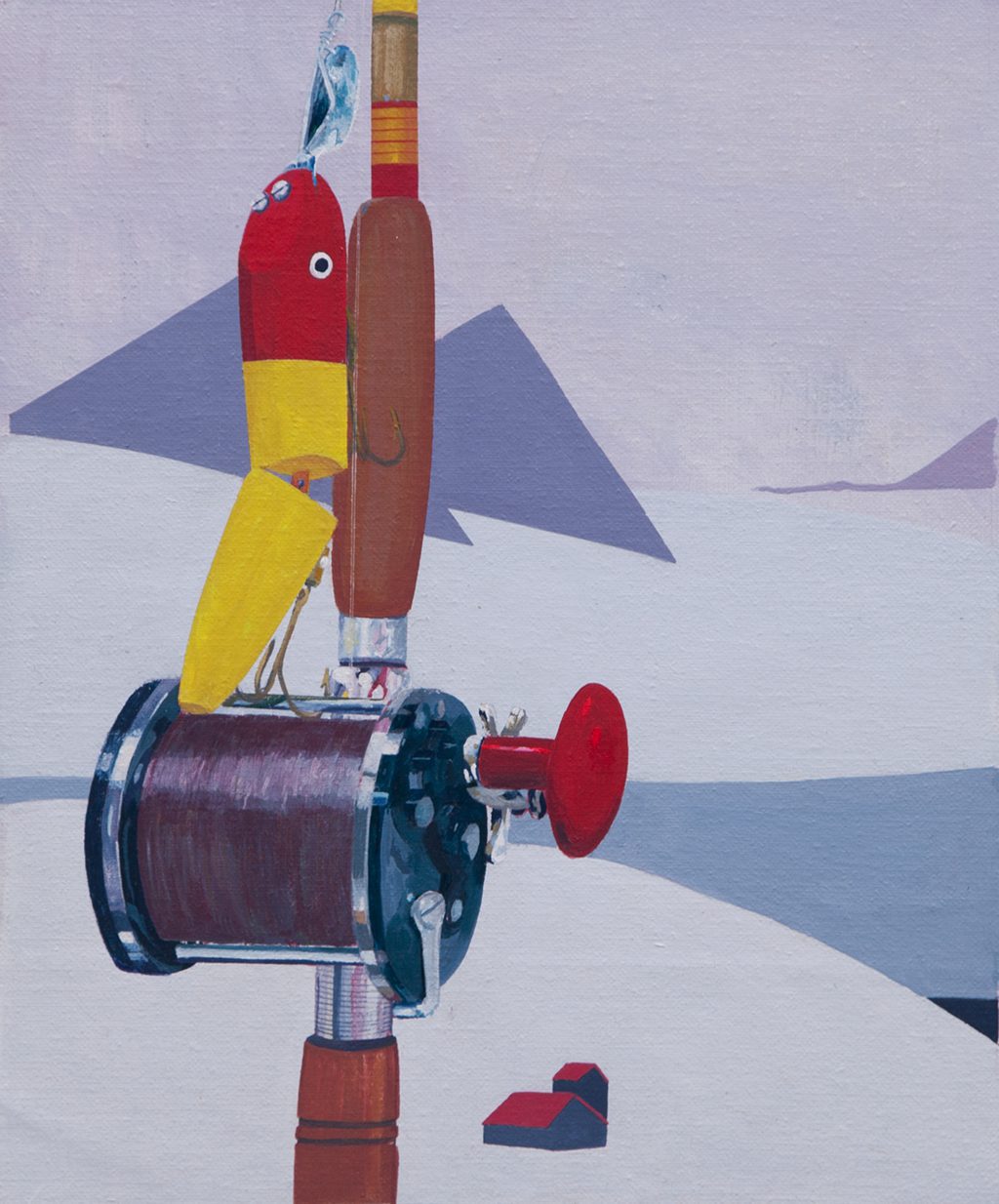 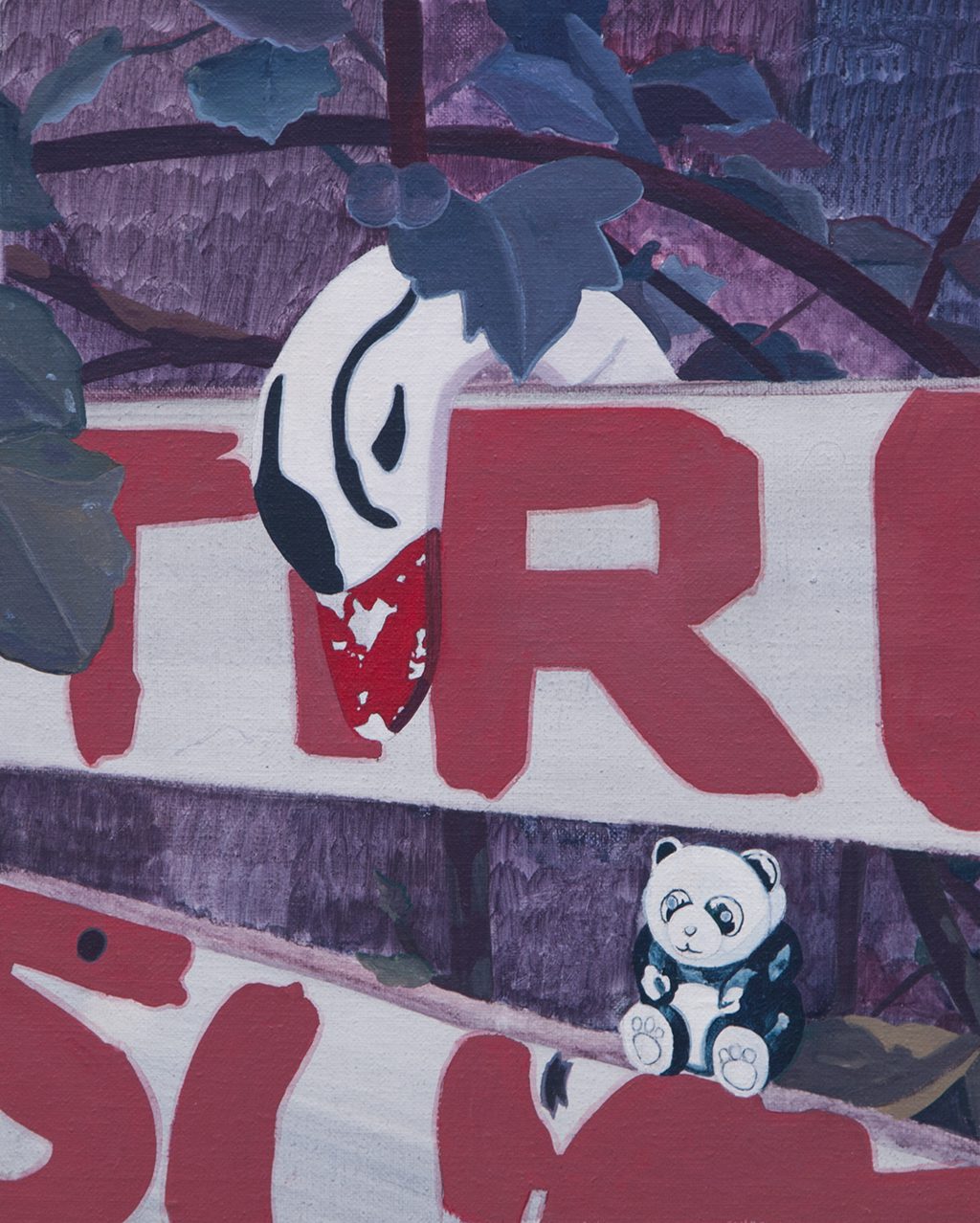 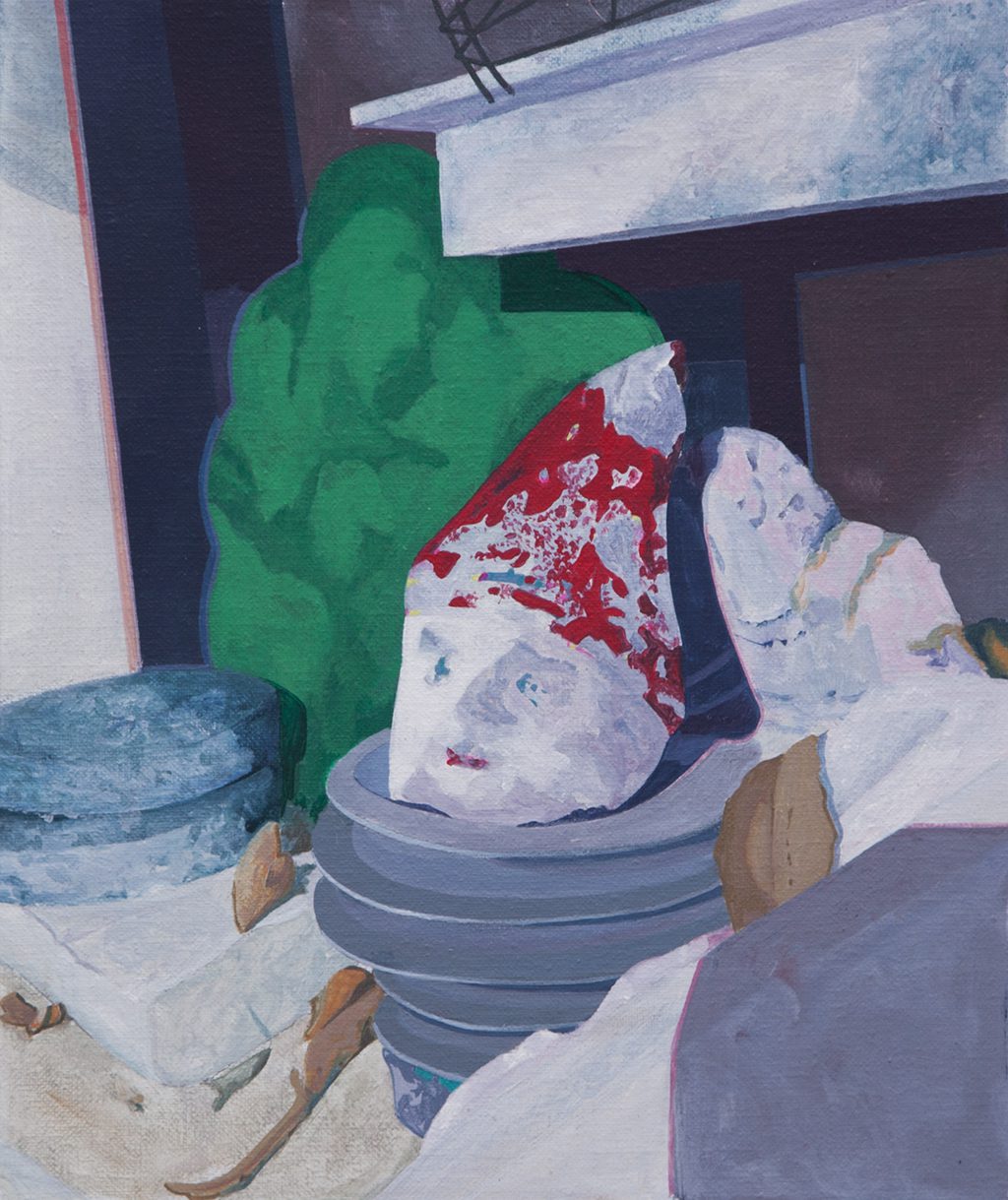 «Sometimes I work directly from photography and others I try to build the image myself, as in the case of the previous work, ‘Lazo’, which was a mise-en-scène that I put together in my house and then took some pictures of it. Other times the works are ‘object trouvé’ like signs that I find in the street, my grandfather’s fishing rod or this dwarf’s head. Inside my studio I decided to face my work in a totally personal way. The work goes from my being to the inside. It is a work of introspection, of my day to day life… And when I start painting it doesn’t matter so much the original photo, but it transcends to another level. I’m adopting a new habit which is to walk very slowly, there is no rush to me and that generates a very beautiful exercise of observation».

«My work is being built with a great burden from my roots from Misiones. Now I am working with a series of photographs that I have modified a little bit and that I took from one of the last visits I made to my grandmother in Misiones, in the north of Argentina, where my maternal family is from. I found a little automatic camera from the 90’s where there was a roll of unfinished film and when I developped it I found some pictures taken by my grandmother. She was growing orchids and these images loaded with family history began to appear… I wanted to work on it, to involve it in my painting and to bring out some of these things for personal reasons. These are things that I had to resolve, as if it were a therapy that I found with painting. In the end, if you want to hide it or avoid it in the long run, it becomes much more evident and you run the risk that because the work is so subjective, it will be perceived as ‘dead’, a painting that does not transmit anything and I would not feel comfortable with it. Sometimes painting connects me with registers of memory, things I have to solve, and I prefer to approach them than to avoid them». 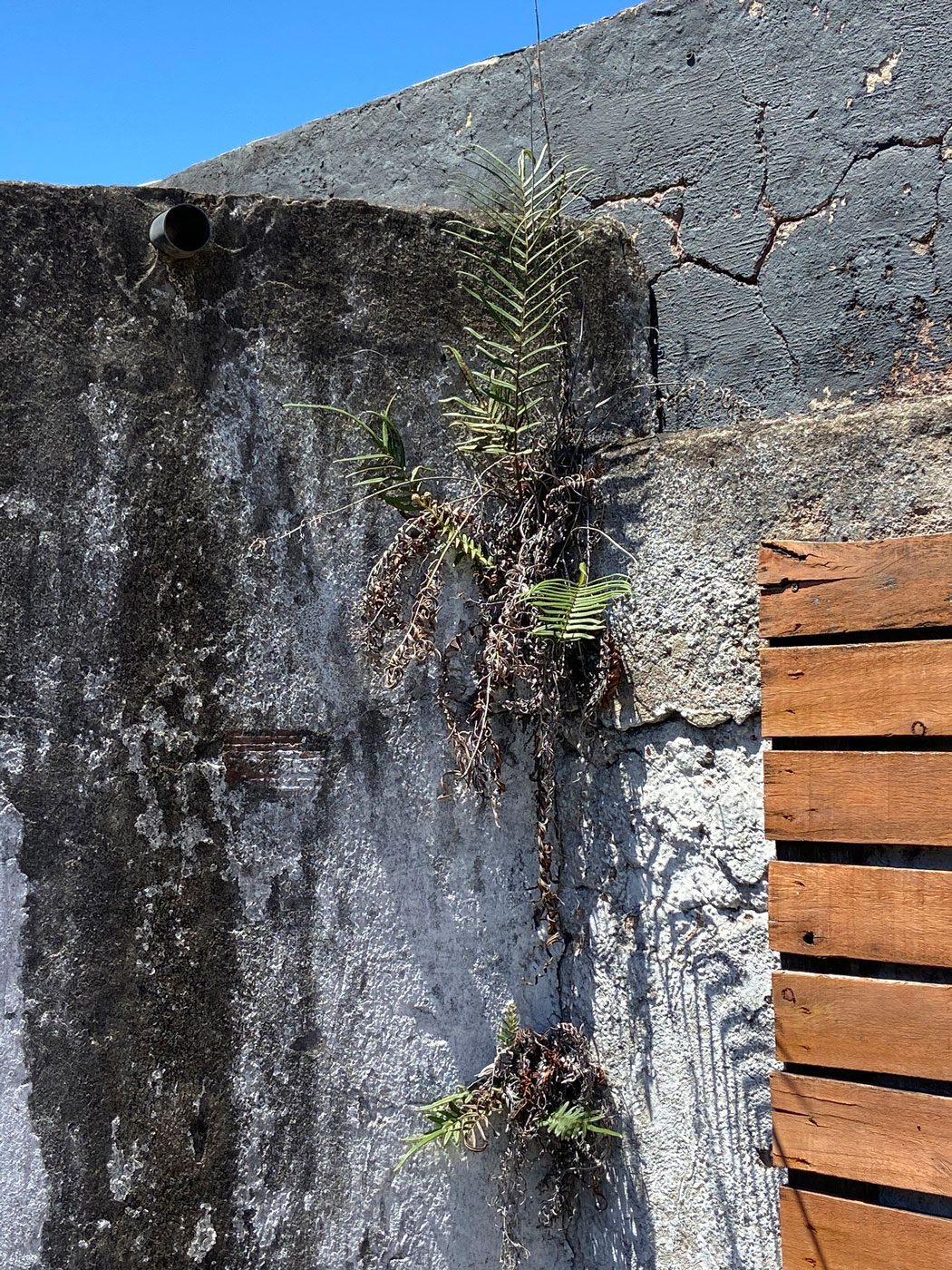 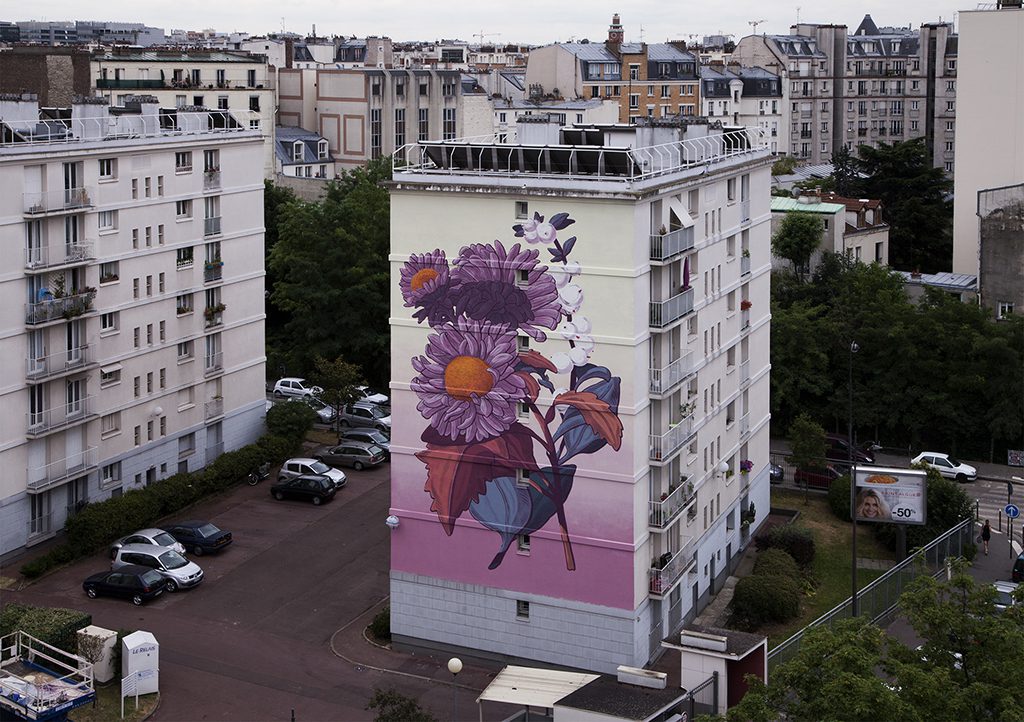 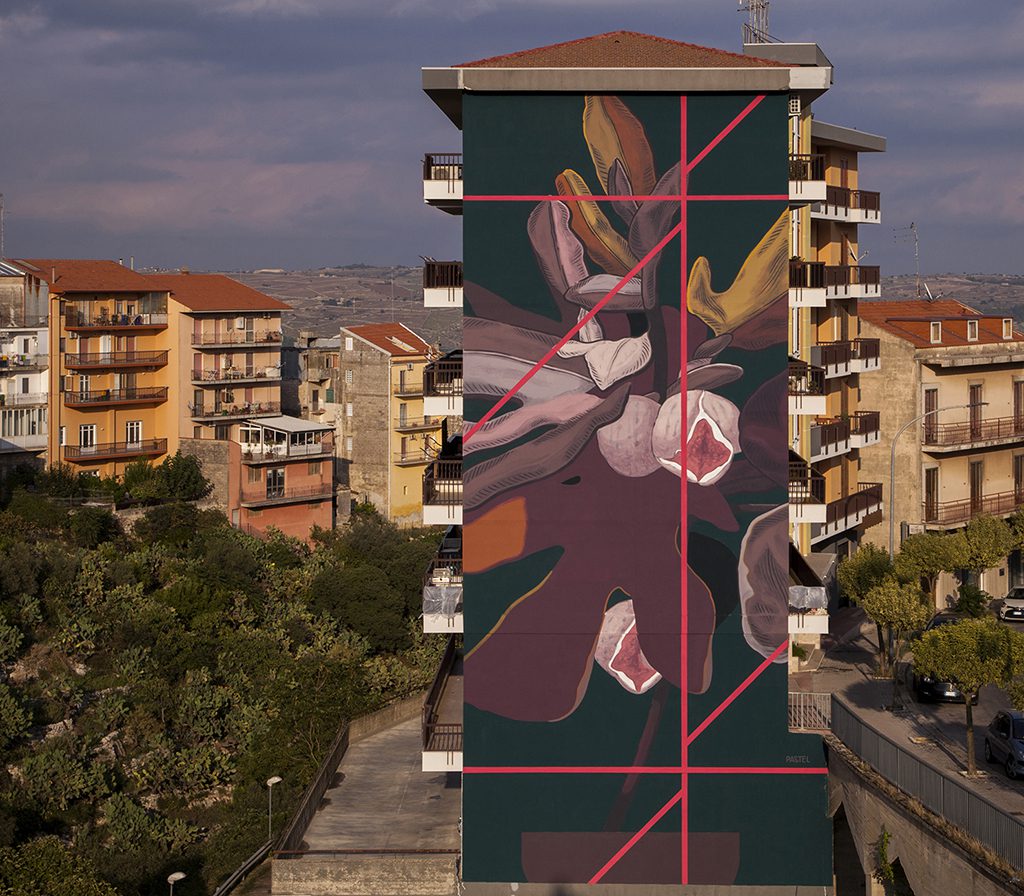 «The mural work I do with the plants started as a search or analysis of architecture, as a critique of this colonizing idea of the city, of the construction and over-construction of spaces. I found a very real language in those little plants in the cracks. And trying to use those elements that are so local and proper to each area, and in a certain way glorifying them and taking them to that size, what I am looking for is to question that idea that can be decorative because of the fact that it is painted with plants, but that in reality is a criticism of that excessive and violent system of habitat in which we live, in which neither identity nor sense of rootedness matters anymore. This idea started to mutate and I began to study and analyze in each place where I was invited to paint. Through the history of the place, how it had grown, how the space worked… in order to generate some kind of proximity with the work. In our work as muralists, this situation arises in which we go to a specific site for 15 days to make a huge painting that will have a great visual impact on the landscape of the place and then we leave. We don’t have any kind of approach to the place, and it’s actually something that is very typical of architecture too, which is where I come from. I felt the need at some point to take care of that». 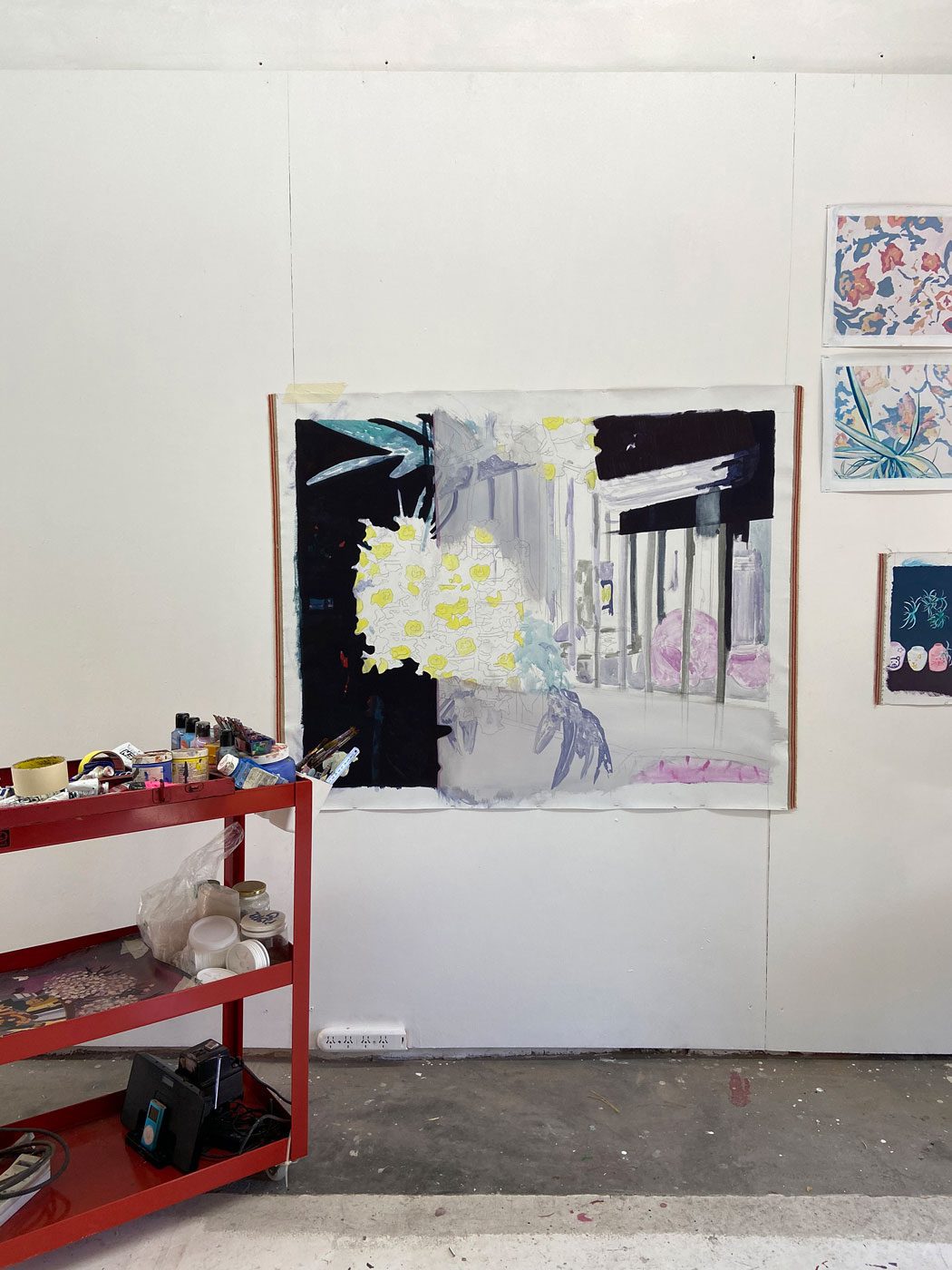 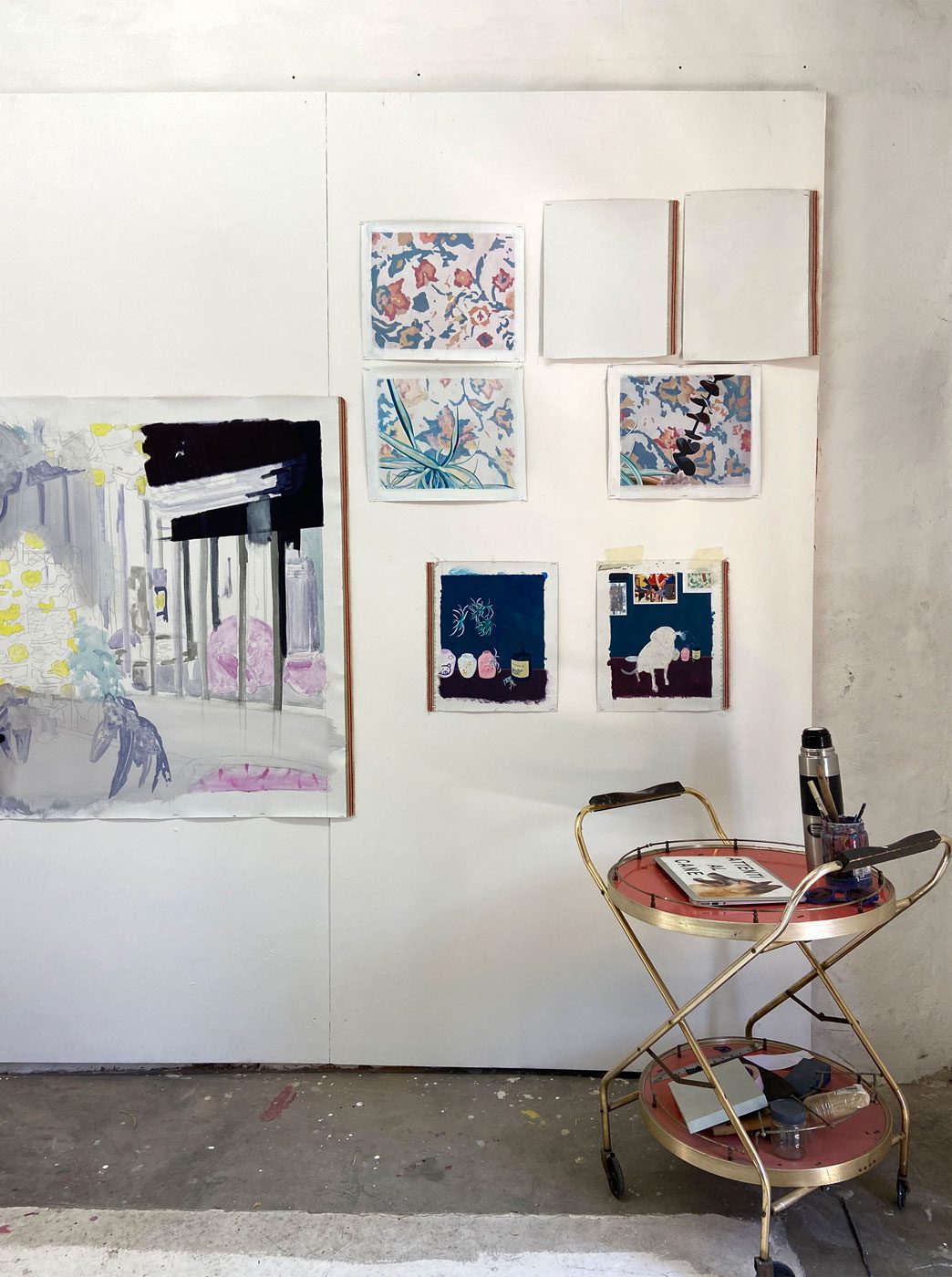 «I just started this painting the night before. It’s also from one of the photographs I found in that camera of my grandmother’s. It’s a part of her house, there’s a bottle of bug killer and a few more objects. It’s the approach of a general structure that responds quite well to the original photo but, again, once I start with the initial stain, the photo stops being important anymore. In fact, I leave the sketch and start to furrow and paint little bugs and eyes that look in the dark… Anything that comes to my mind. Right next to it there are a few small color and shape proofs for the background of the first painting web shown, also some smaller works that need to be finished».