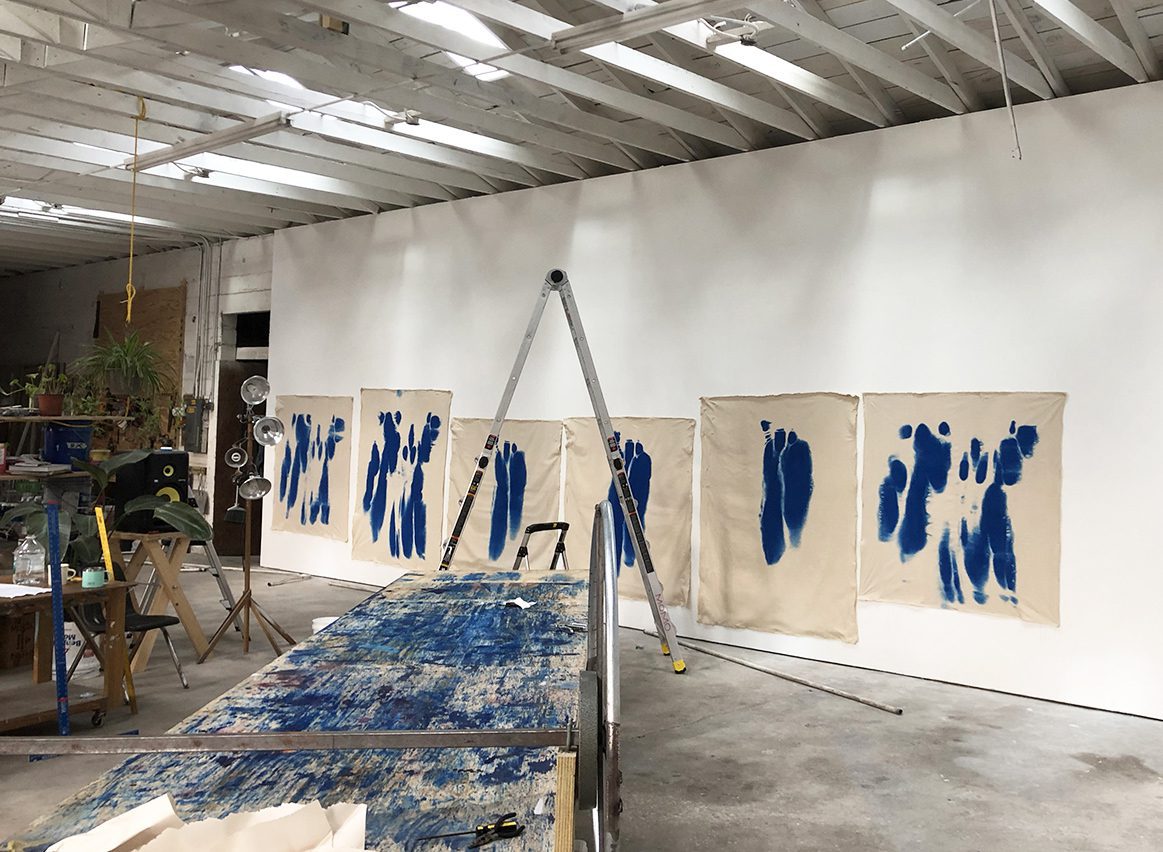 Playful, complex and brightly colored abstract murals and canvas, the Californian artist and Florida based, MOMO (San Francisco, 1974) has been experimenting with shapes, form and color for more than twenty years now. It wasn’t graffiti what led him into the Street Art scene, but his multiple travels around the globe, which he planned and financed by painting here and there. Nowadays he’s one of the global totems of the urban art scene and his compositions made with perfect parallel lines in different colors are easily recognizable. As for that, he has developed some amazing handcrafted tools and gadgets that allows him master techniques such as doing perfect circumferences, ovals or any geometrical shape, and his work with code has been an important part of his career, bringing to life  Momo Maker, a computer program which allowed him to genarate endless patterns by using gifs and free code. But also these DIY machines have made him question himself about his well-organized compositions, leading him to explore with entropy, a scientific concept explaining the measure of the molecular disorder and randomness of a system by introducing in his paintings random drops of paint with his latest artifact to date, a foam roller that expands dropped paint on fabric. About this, and many other topics, we talked about in our latest Urvanity Meets session with MOMO connecting from his studio in Jacksonville, Florida. You can check out the complete conversation here. 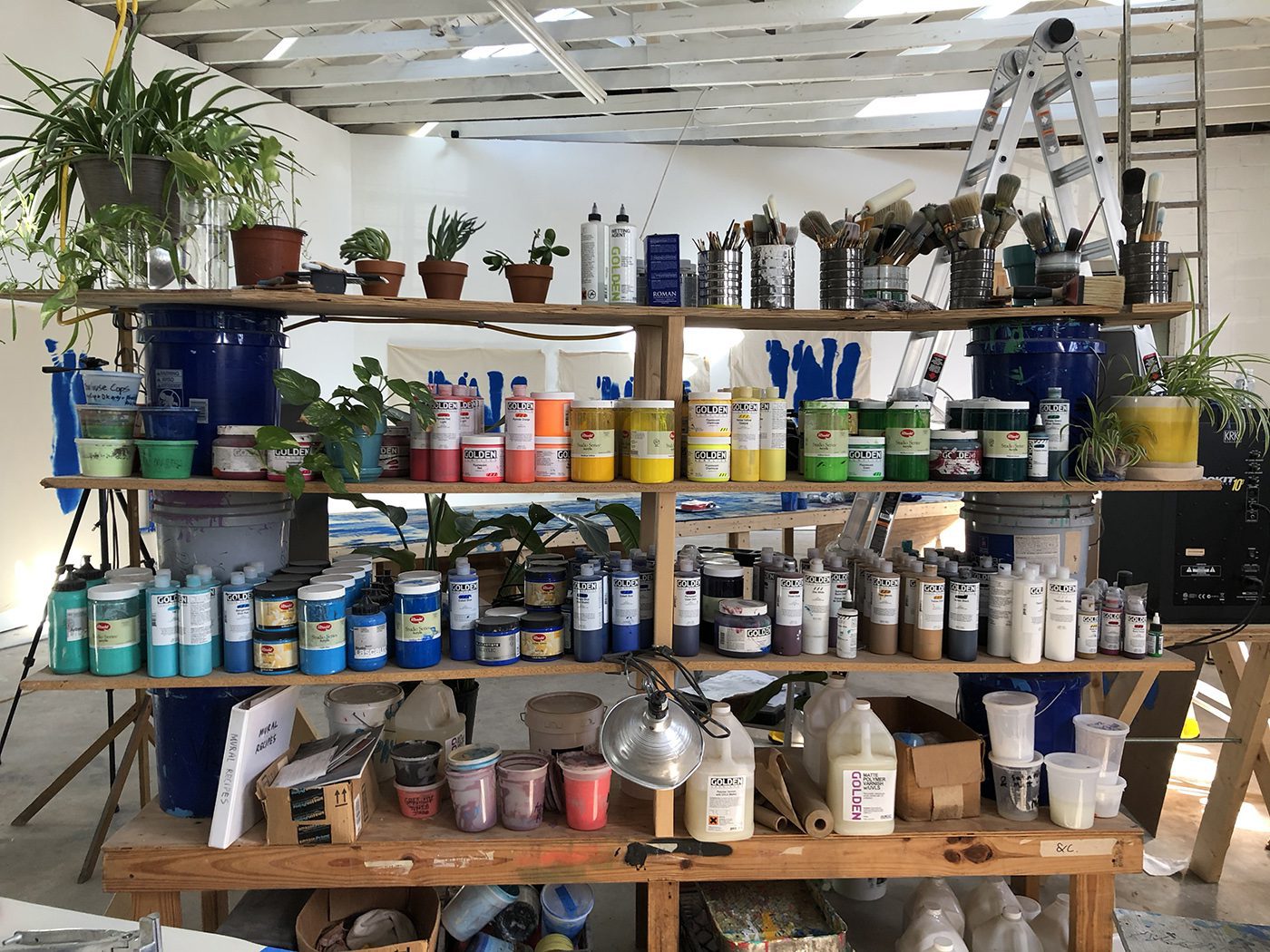 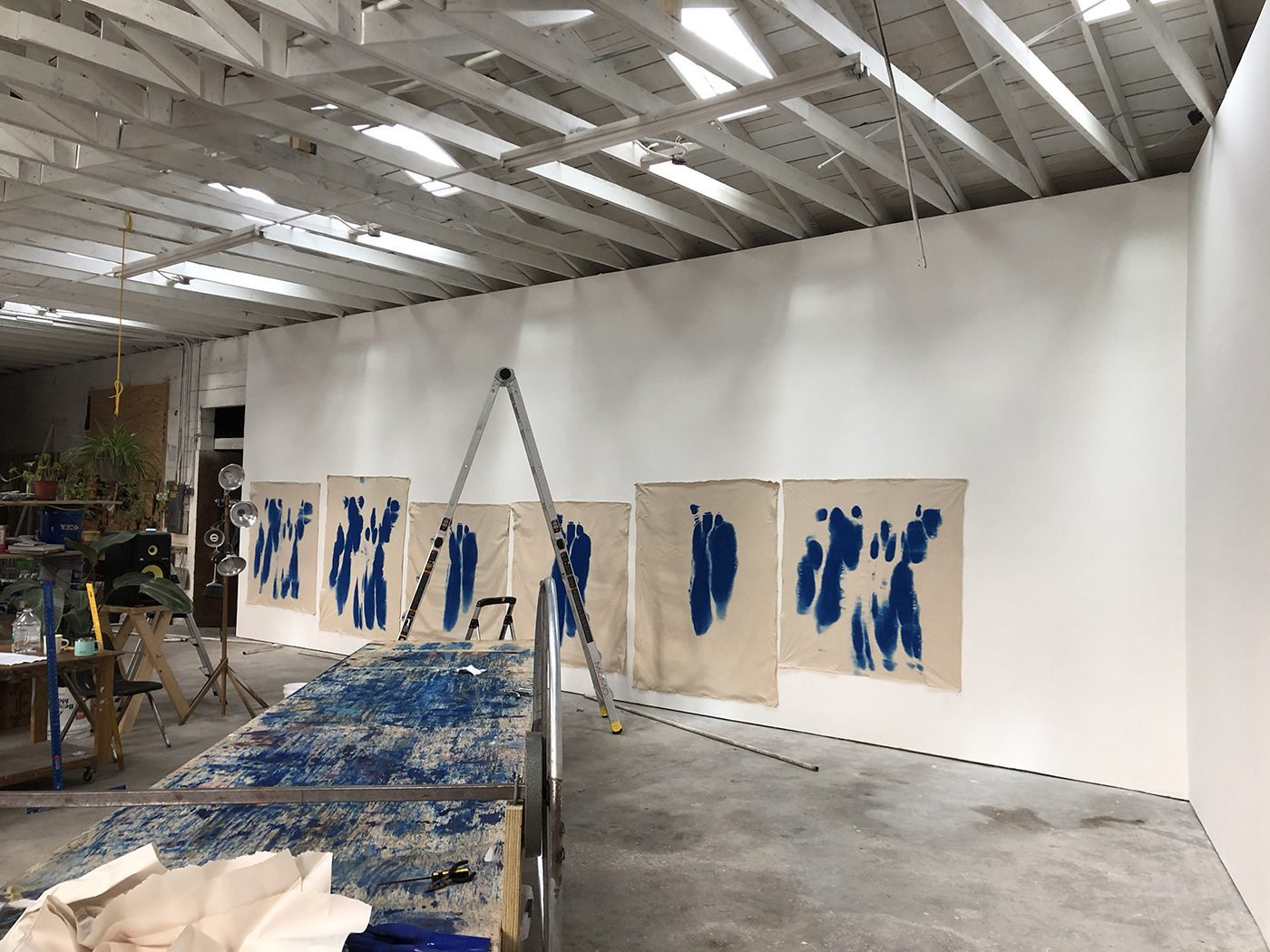 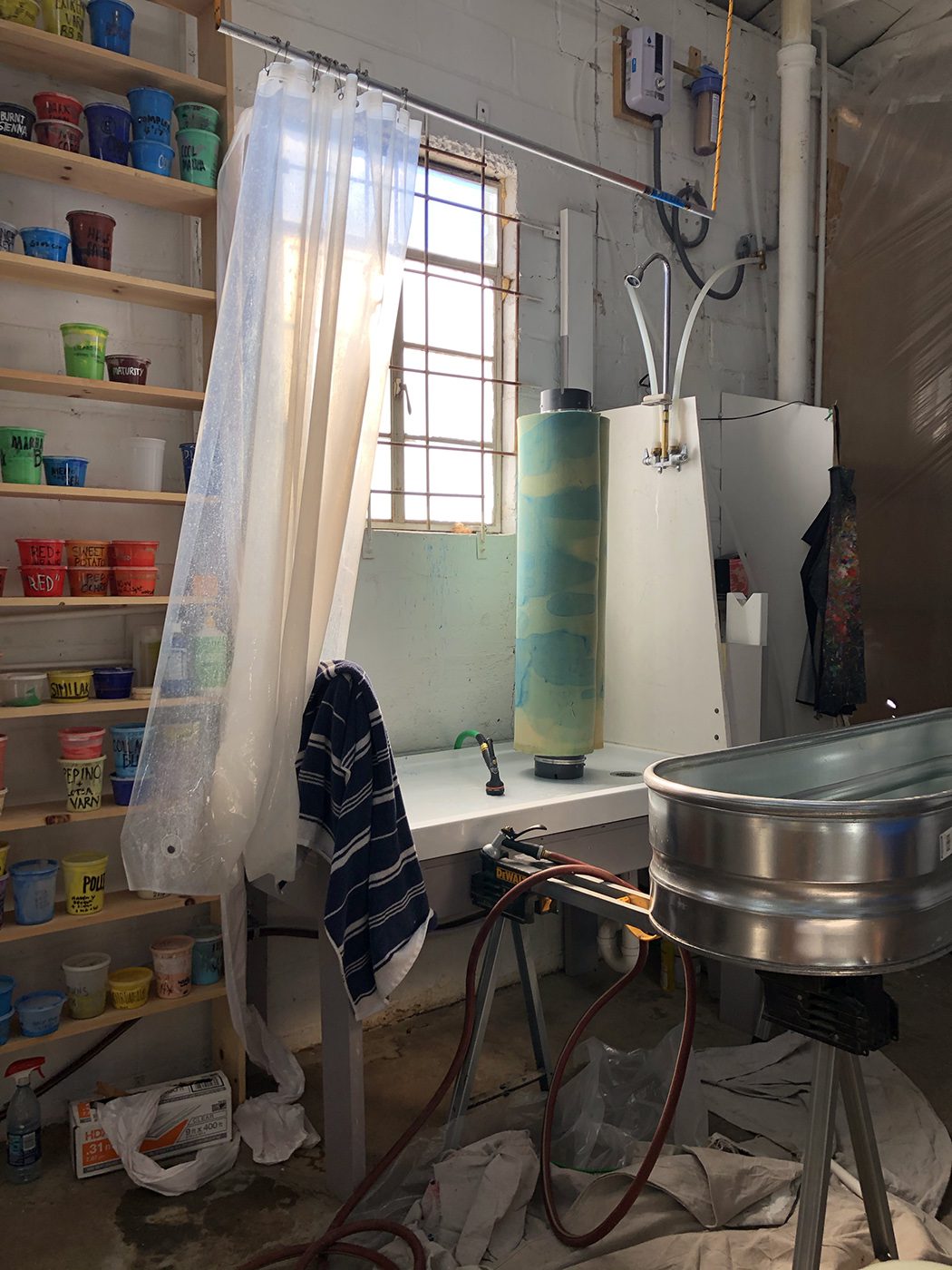 «I was able to get this building one year ago. The studio that I had back in New Orleans was sort of a squat and we were kicked out by the police, so I came to Florida and I found this building. It’s the first time I have ever owned anything and I’m pretty excited about that. The space is divided into the painting studio and the living area, they’re kind of separated, and I have a little garden outside. This space is pretty fancy by my standards, I have even a/c and I have some stuff I design myself! ». 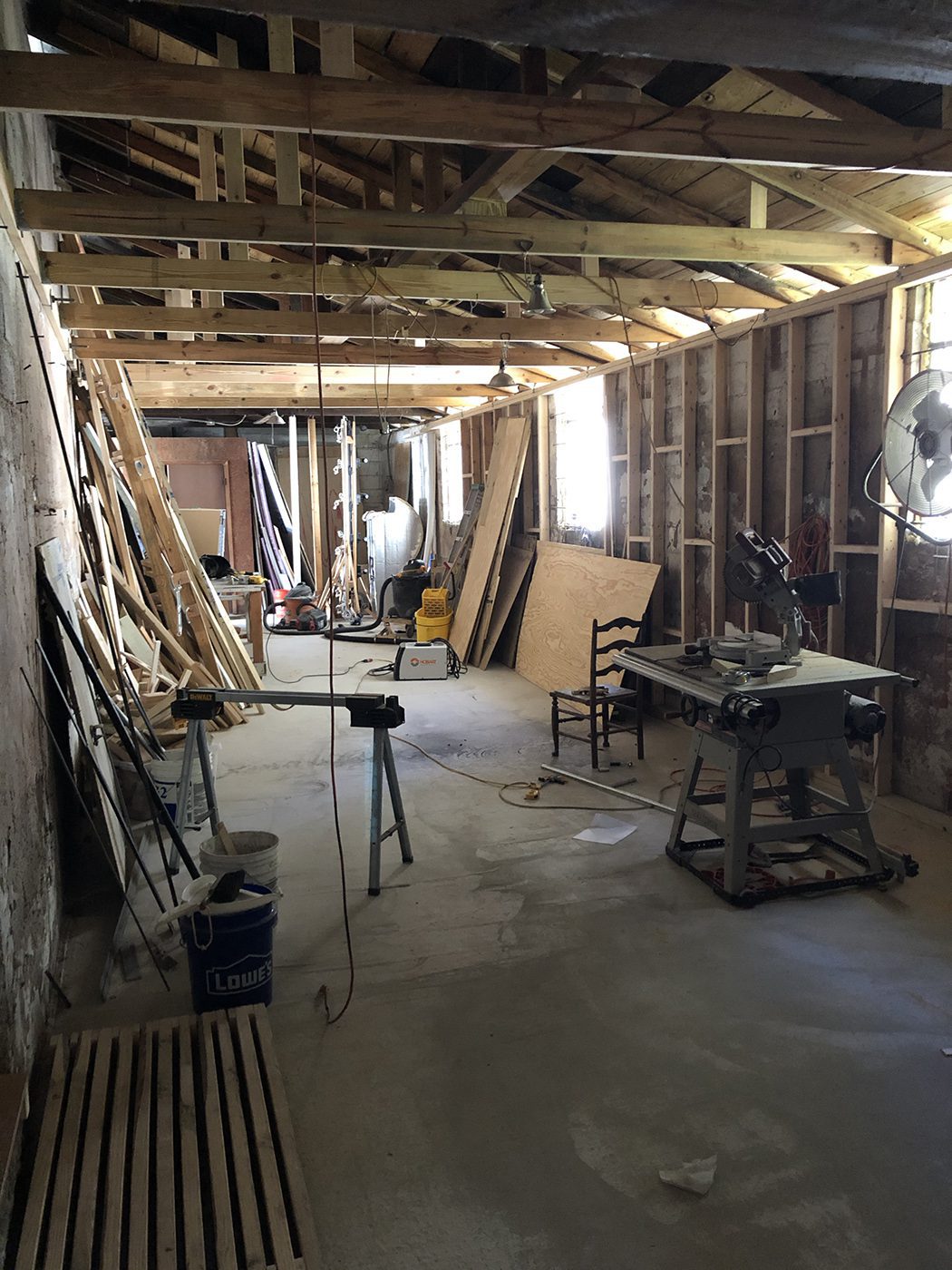 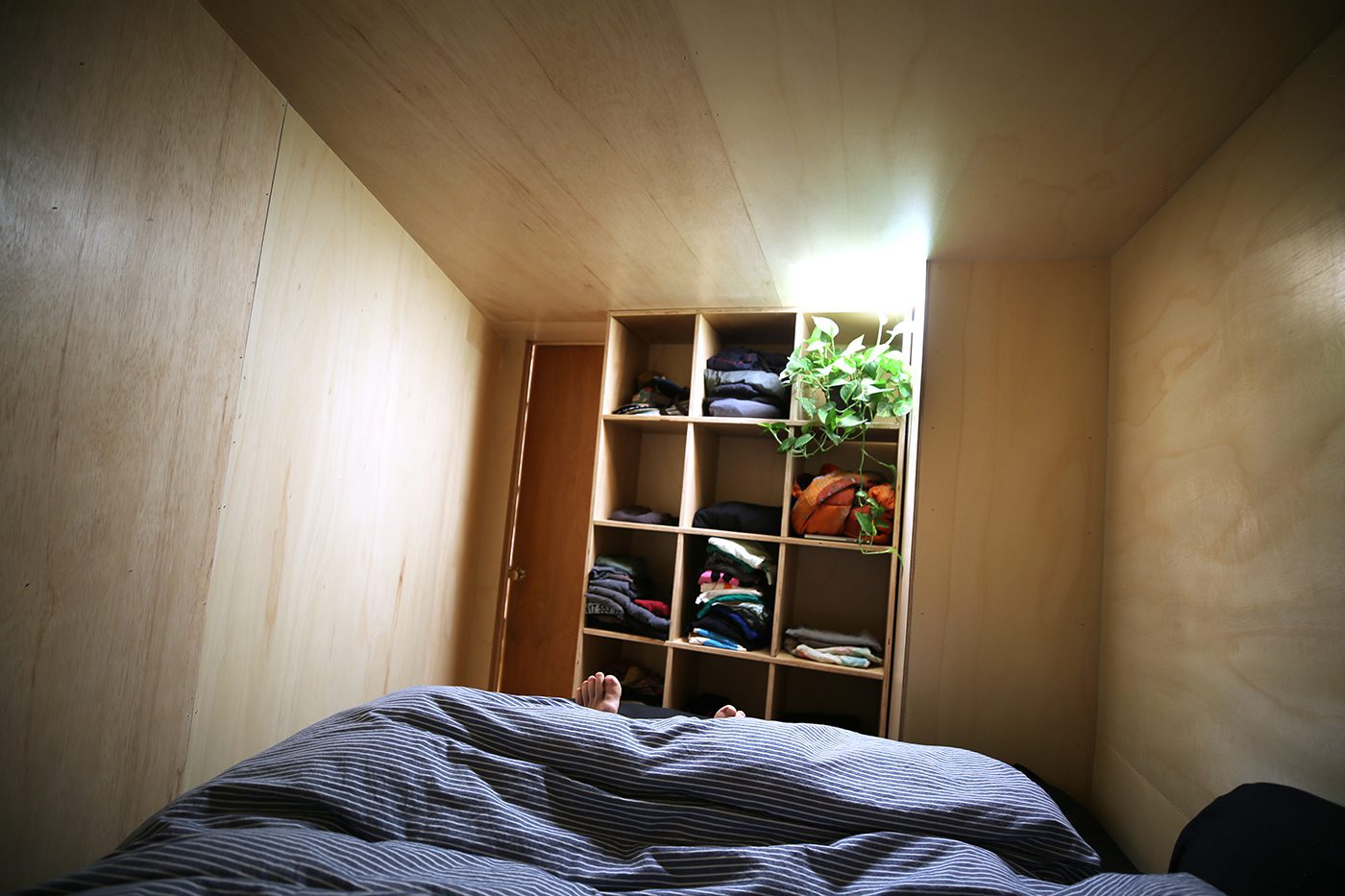 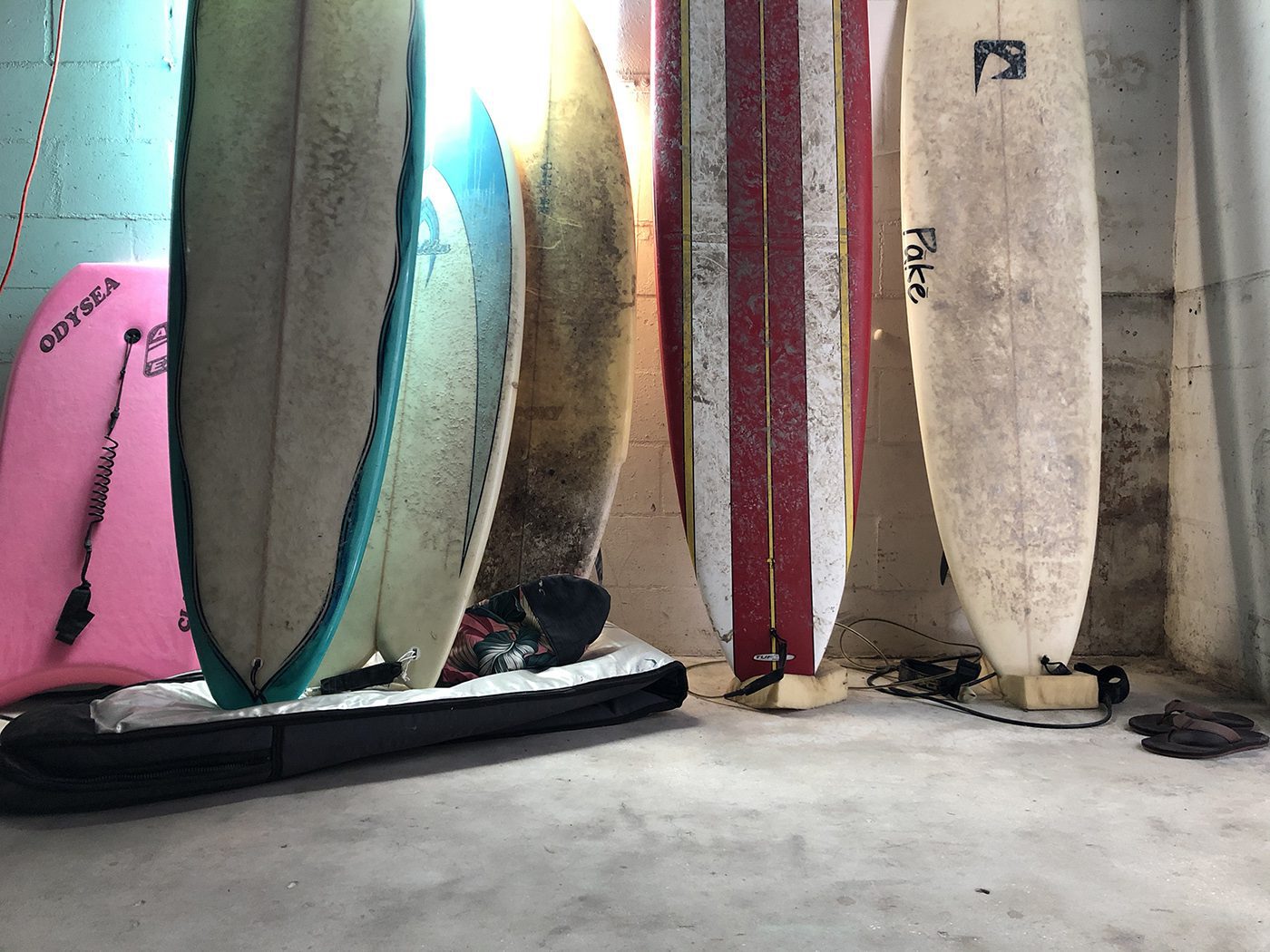 «This first room in the picture I call it the disaster or dead body room… Is where I do all the cutting and the welding and will be the last one to get pretty. Inside there is a room that it’s hiding because I built it in between two walls. I made a really nice bedroom, all with shelves and a little skylight. It’s all very small made in wood. It’s been a crazy project for a whole year constructing all this stuff. I had to learn a lot about new materials, upgrade some skills on structural stuff… I love constructing anything». 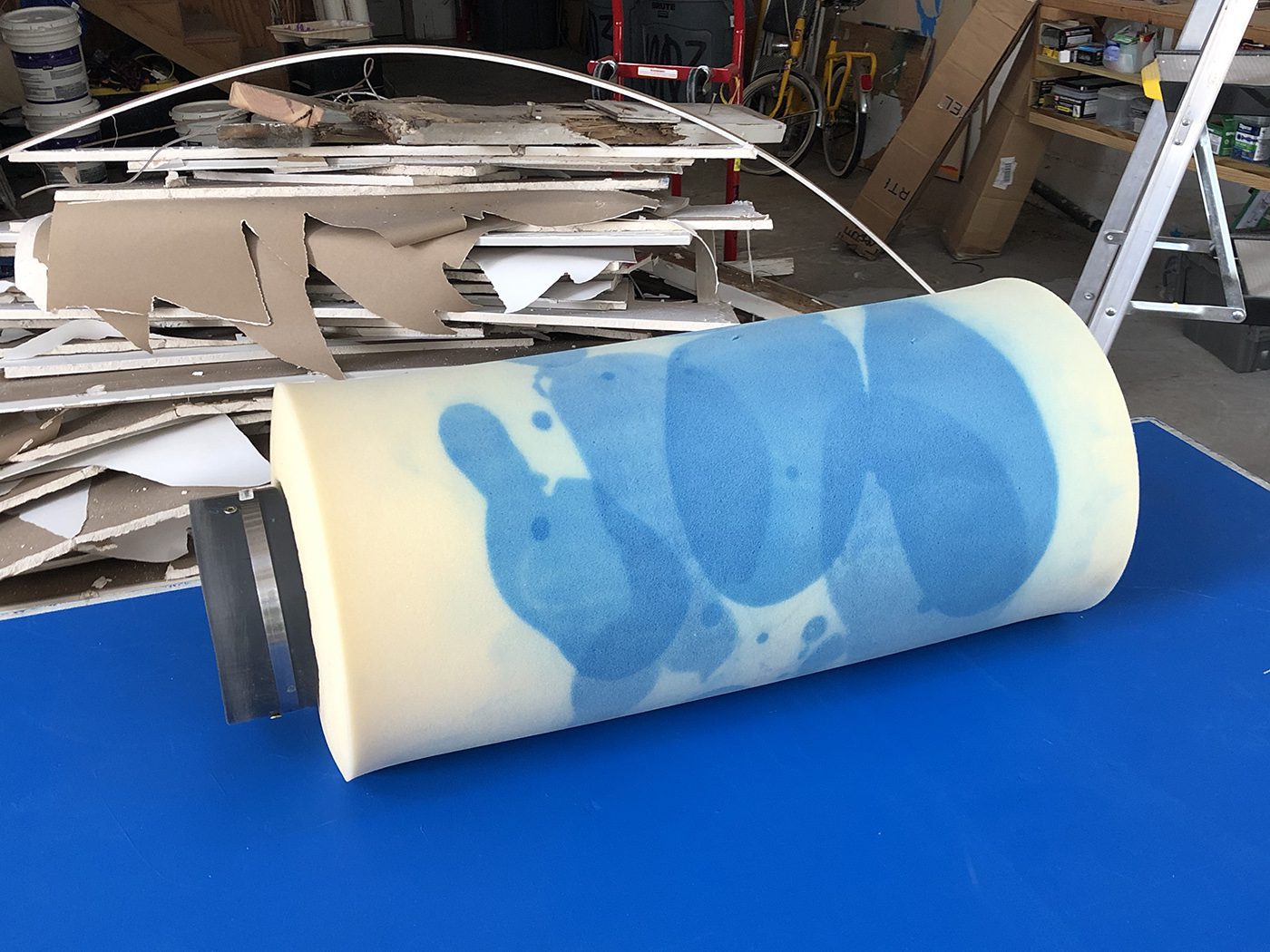 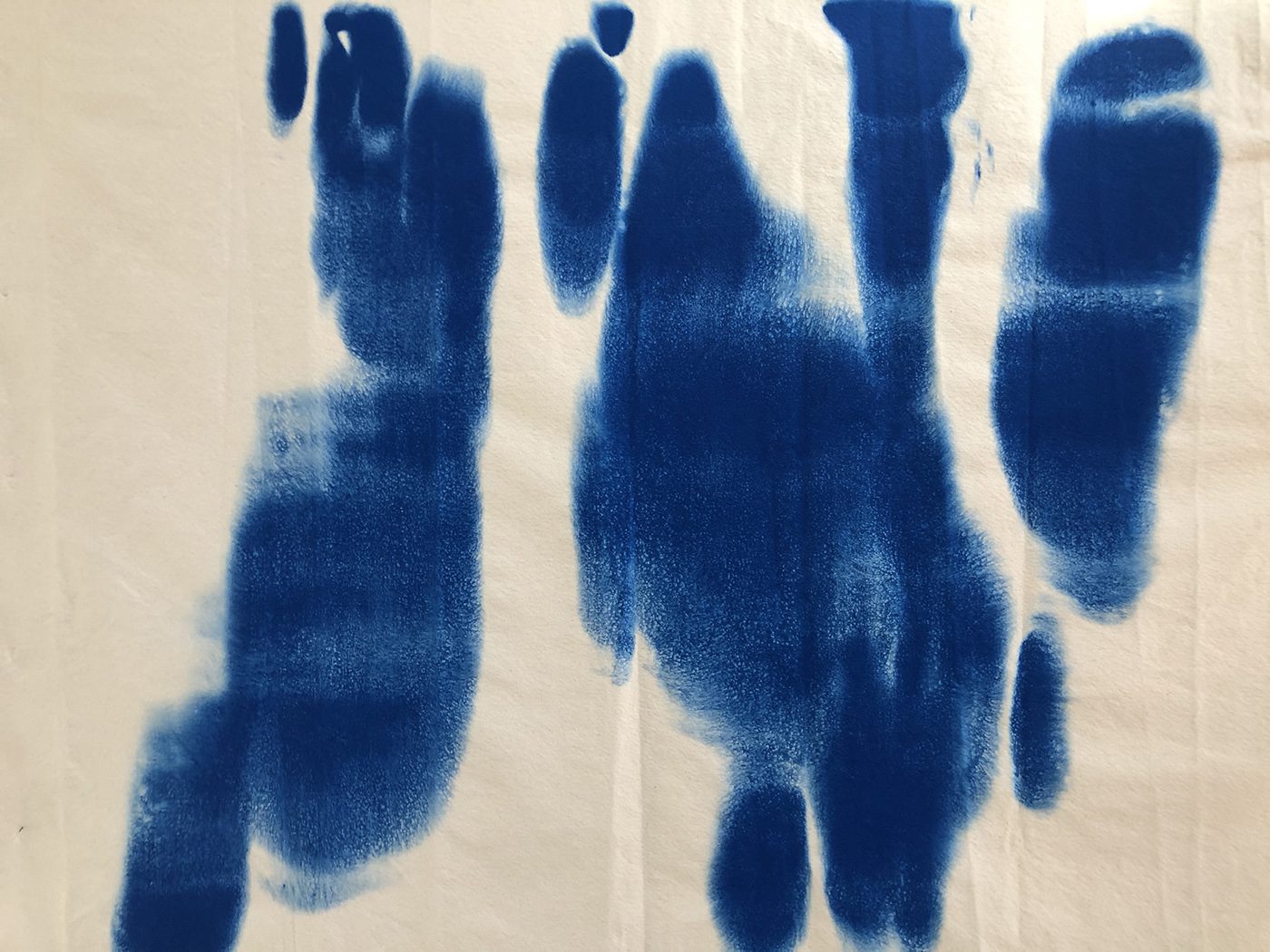 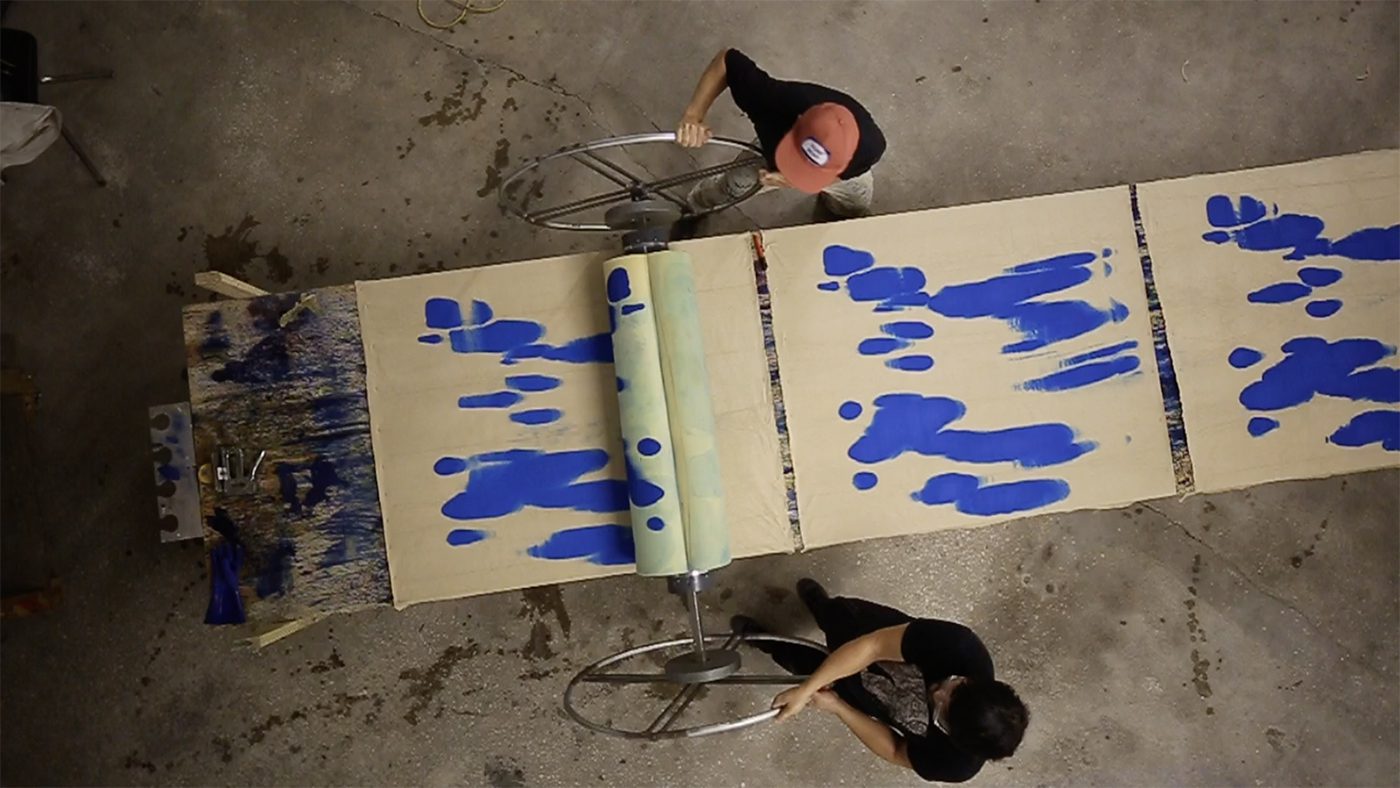 «I just finished yesterday building this foam machine. It’s a printing piece of foam on fabric and a metal wheel that gives you some control on it. I constructed it with some weights so there is some pressure, and so I can control its movement. I usually drop a mess of the paint somewhere in the table and then pass the foam roll through it one time. I like that I can get something random like dropped paint. These days I’m working a lot on that idea of having all this well-organized lines and geometrical figures that I paint on a canvas, mixed with this total disaster provoked by the paint dropping. I make a lot of stuff that it’s highly organized looking, because of my sensibility, my temperament… But then I find there is something lacking in that. If everything is controlled there’s no surprises or aspects of nature happening. This led me to explore some ideas around entropy, which is a whole category of interesting stuff related to other sciences, but for art, as in visual appreciation, I think it’s nice to have something super organized and then paint something behind that it seems to be as free as it can be, where organization isn’t obvious». 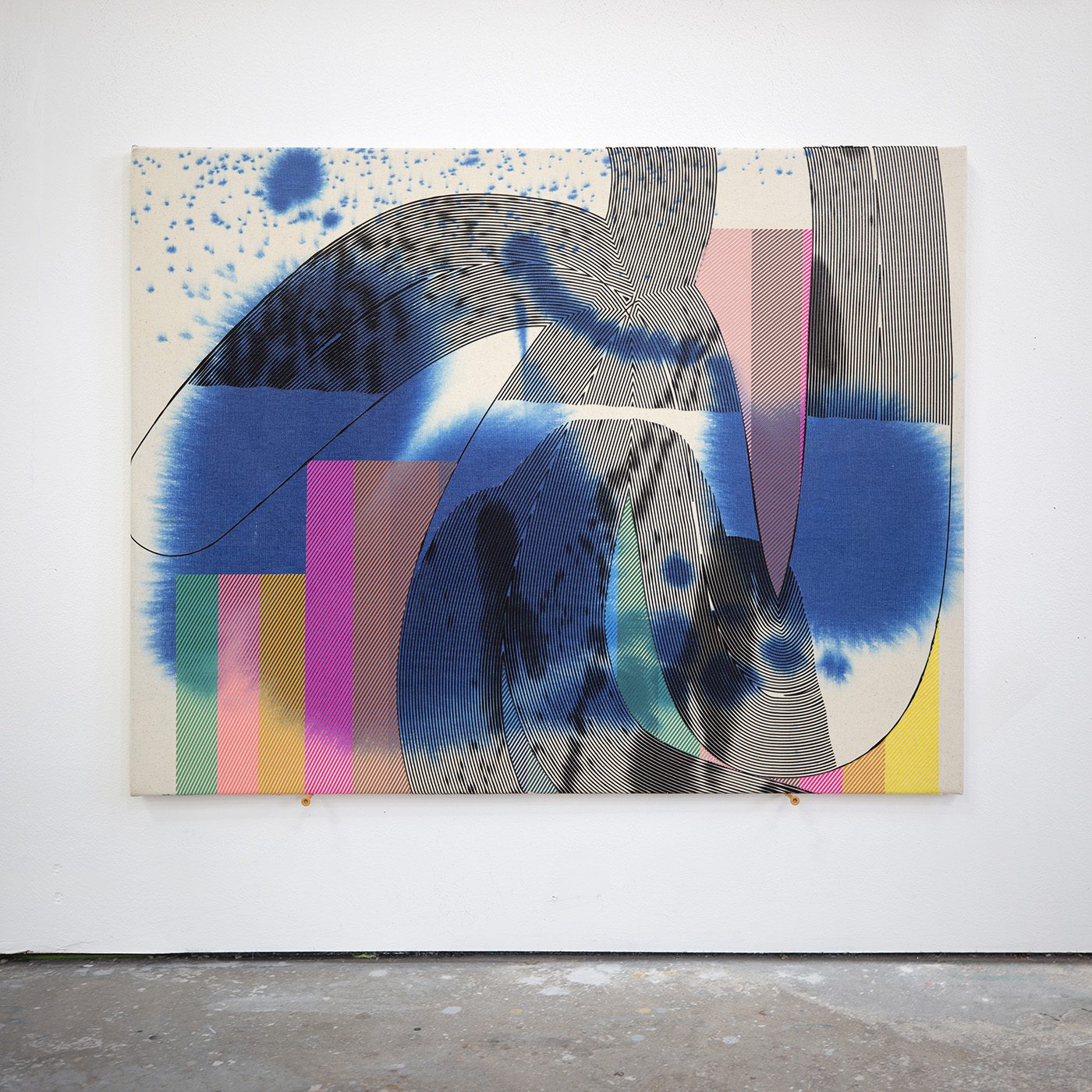 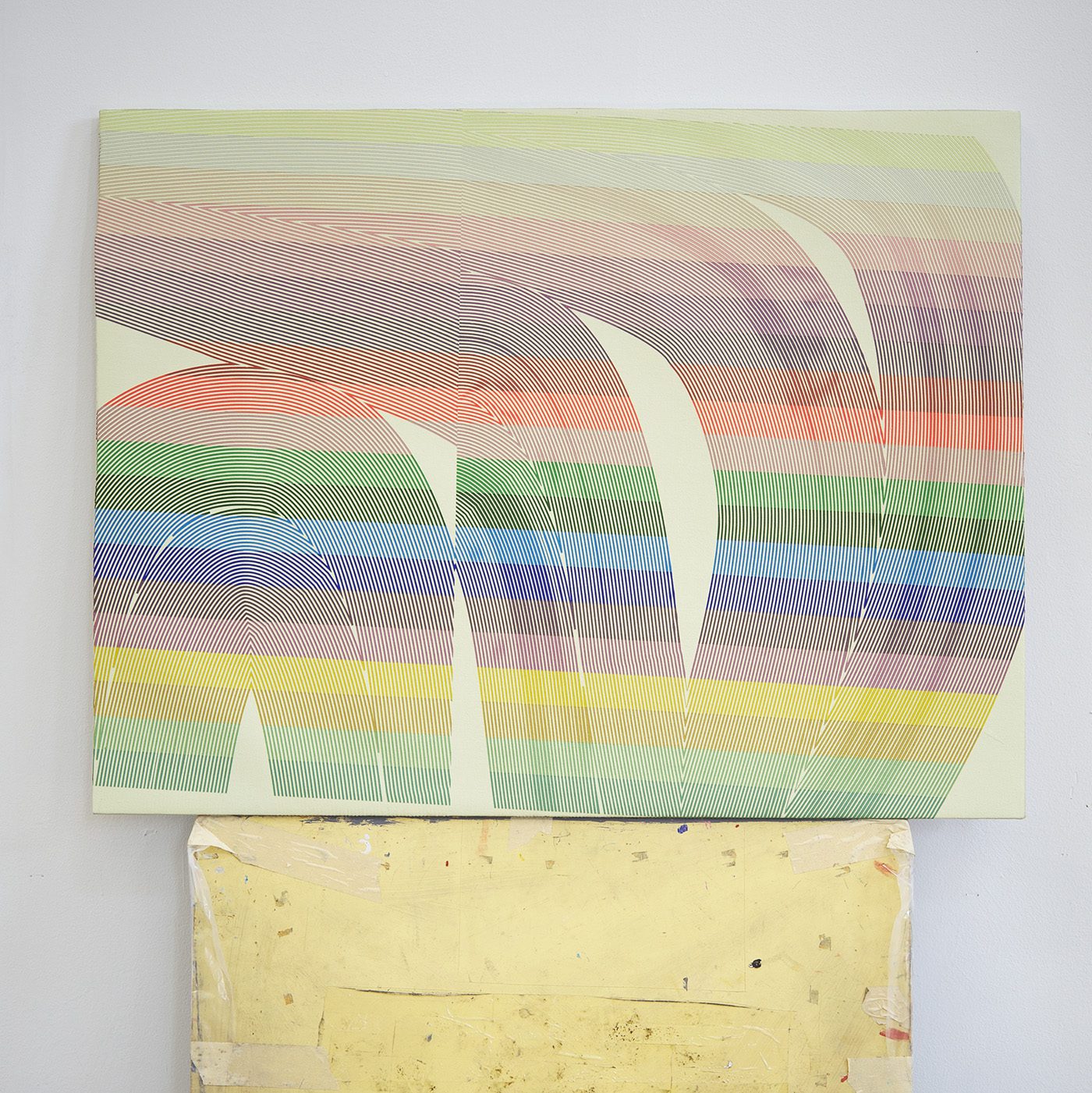 «To make all this perfect lines when doing a canvas, before I used to measure all the little distances one by one to get this kind of geometries or half tones. So with my pencil I would measure it and paint it really carefully using tape. But then I found I could be plotting a piece of vinyl, which would be acting as a masking material, like masking tape, and then I paint on top of it. I do it with lines but of course the computer can cut any kind of crazy designs that you would want into this and I actually explored very little of that. I just stayed with almost exactly the look of what I could do using the measuring technique, but it could be a million different patterns. I’ll get to that eventually, or some other artist will, but for now I feel there is a lot for me to explore in this line». 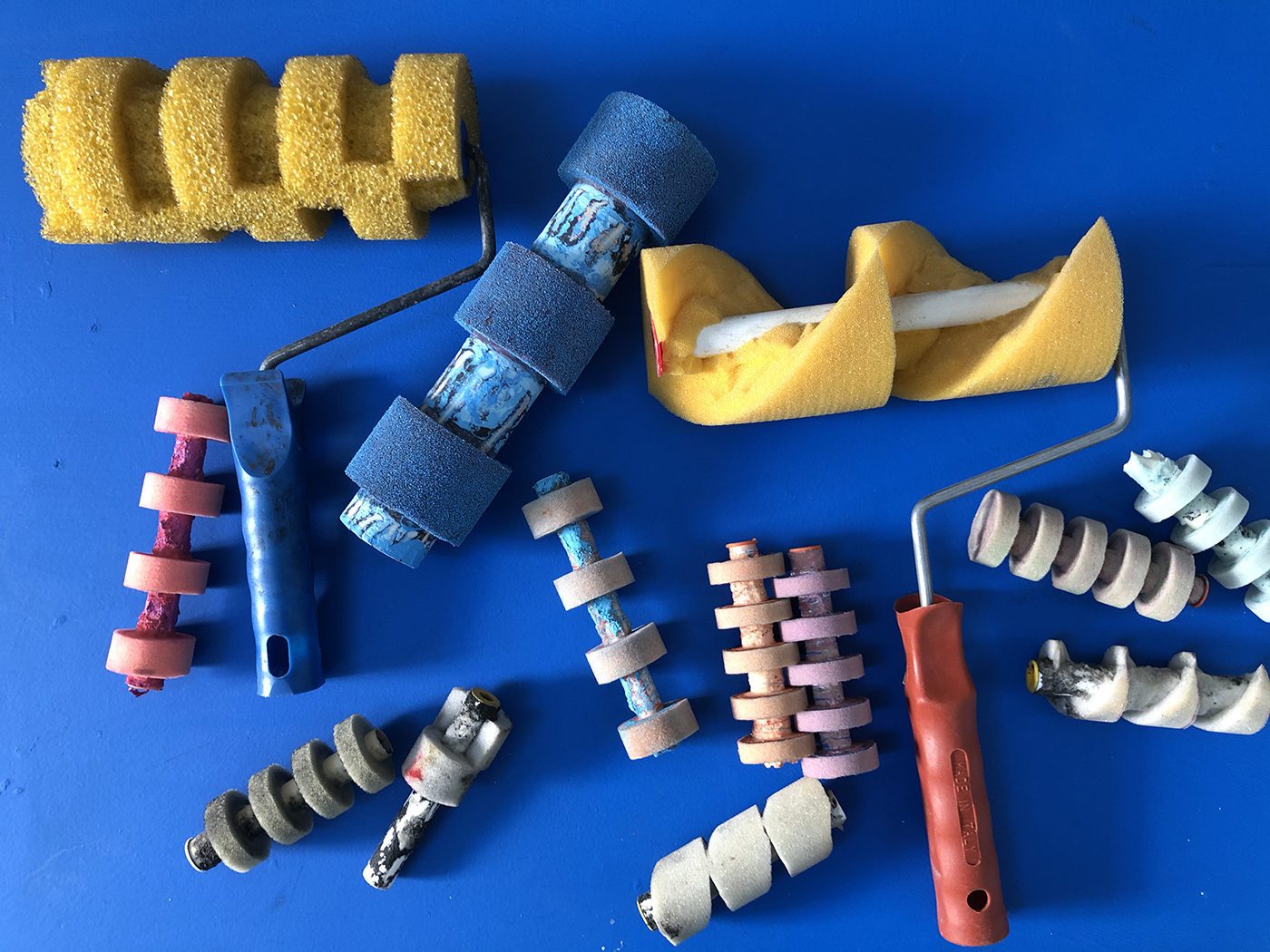 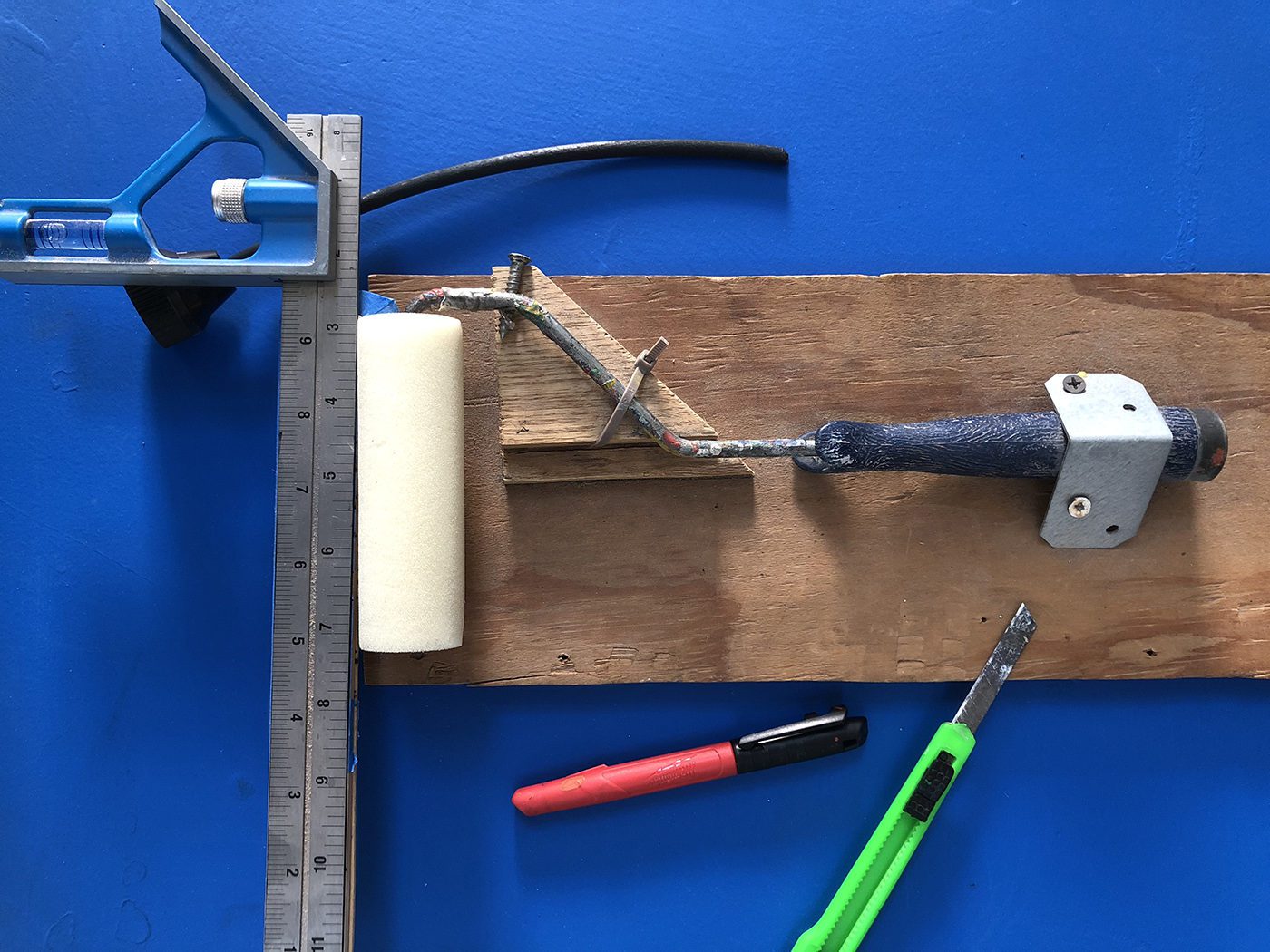 «Although when I try to take this line work to a wall I change from using the vinyl masking to the roller technique that I developed maybe ten years ago now. Before I was just painting things on like a chain and I realized that a regular fabric measuring tape is not as heavy as a chain so I could just hold it and go line by line. Later I realized I could go directly to draw five lines if I would cut a foam roller (pic 1). But for the patterns to feel it’s really repeating you need to measure it really carefully, so I constructed this artefact (pic 2) where you see there’s a meter on top, you insert a roller and holding a pen and turning you paint a line to then cut the foam. There’s some history with pattern rollers and people would decorate walls with it in the early part of the last Century in New York City. Apparently it was a cheap way of putting a repeating pattern on wallpaper. And in my case I’m pretty satisfied with the effect that this creates because its mixing two colors and optically making a third one. I’m always completely fascinated with color and I think it’s one of the big things that it’s free and that anyone can always just observe and study by watching». 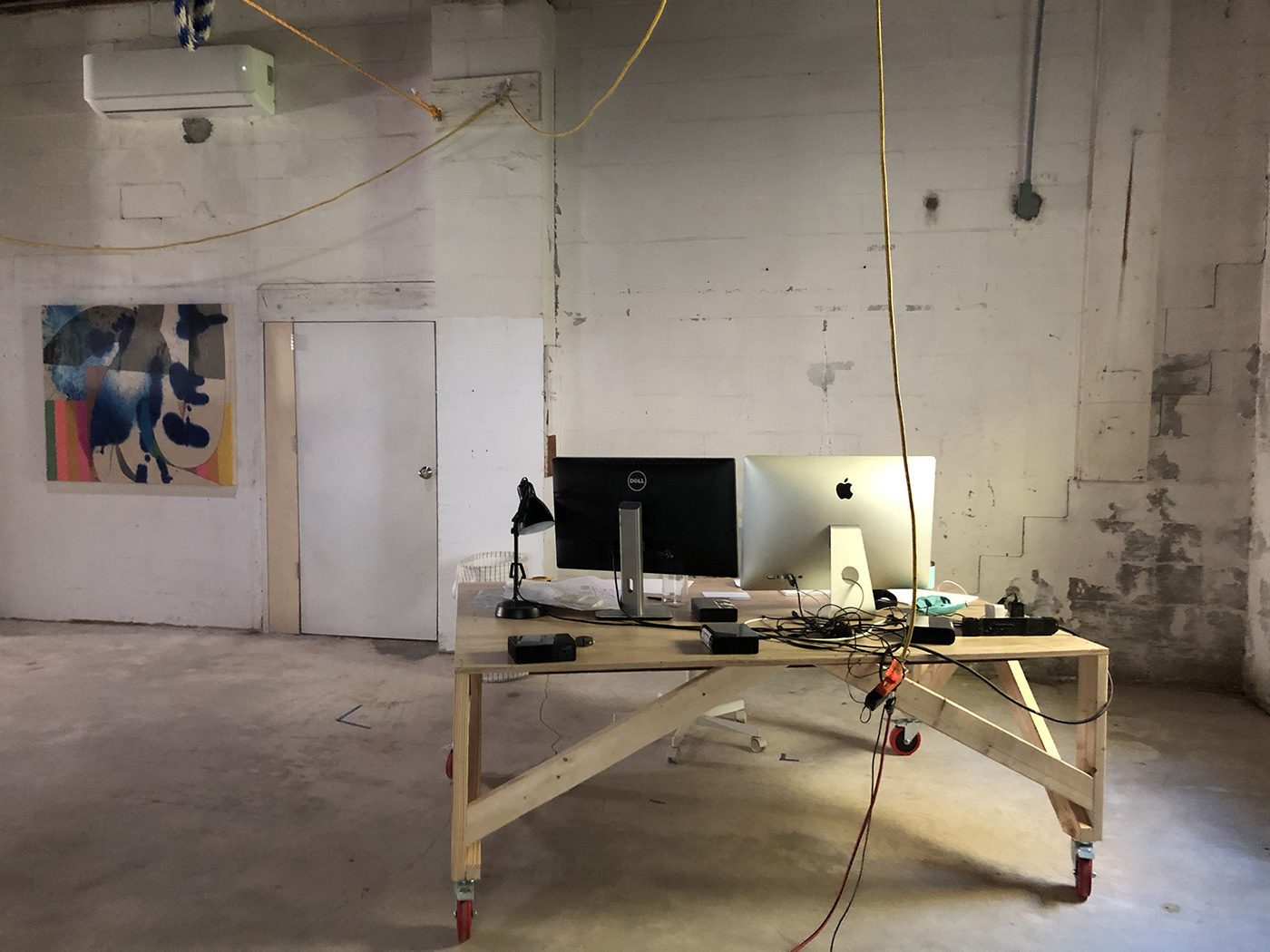 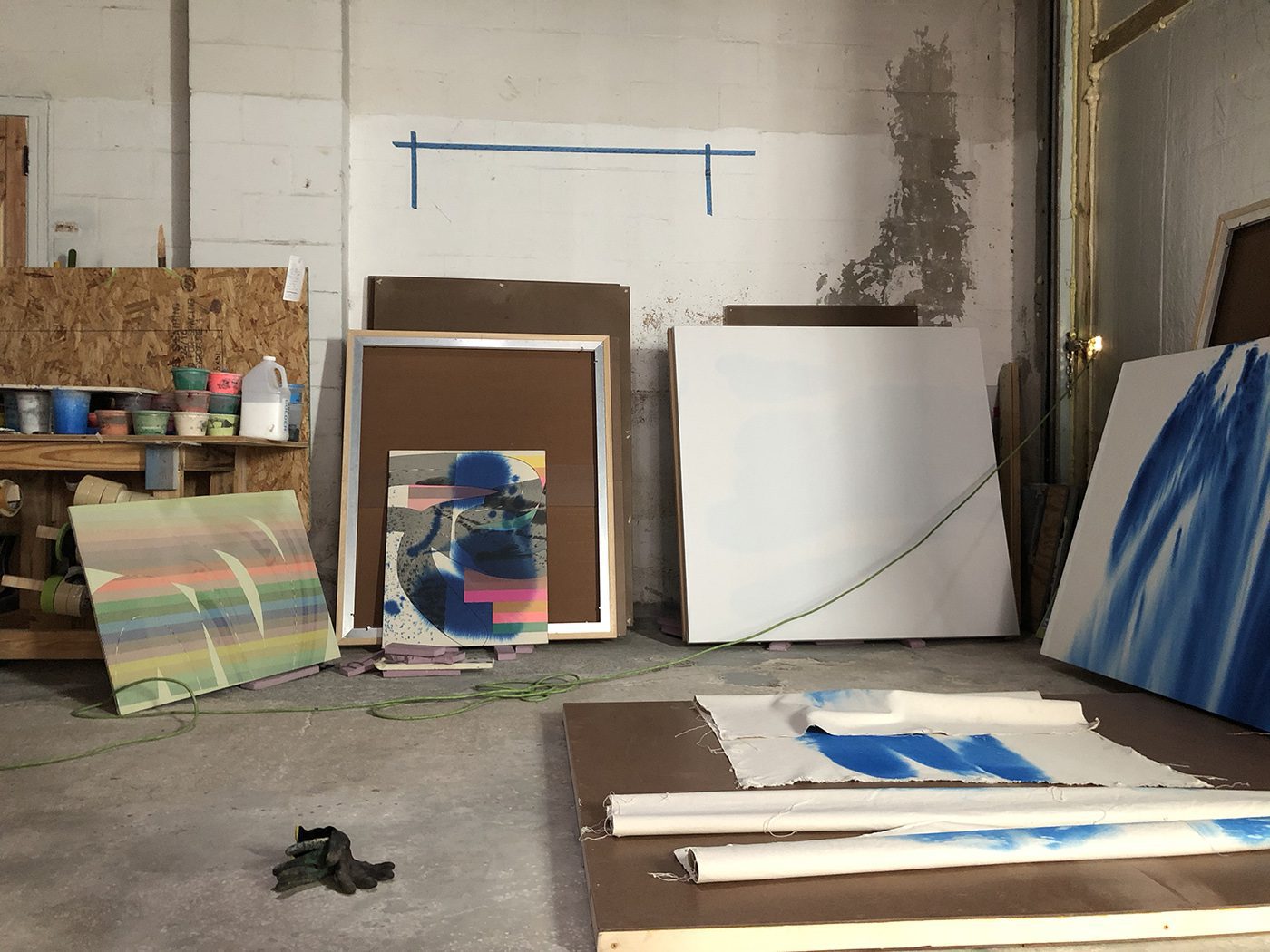 «I normally design my works previously on the computer, I use it all the time, it’s like my sketchbook now. Maybe that is a good thing and a bad thing but I used to sketch on paper constantly, and I found, I guess like a lot of other people, that life is happening on computers right now in all kinds of ways. It’s always with us, you can take notes and make sketches… Once you make it an easier tool to use I think there’s no point in trying not to give in. By the way, this table I love to talk about it… I built it myself».