Put some Art into you library 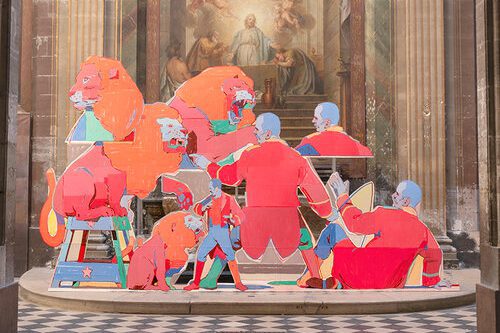 Kaws, Aryz, Banksy, Waone Interesni Kazki… We go through some of the greatest book launches of these last months and we will give you a preview of the last publishing news to be released in 2021. Take note to update your book collection and make sure you write them down in this year gift list! 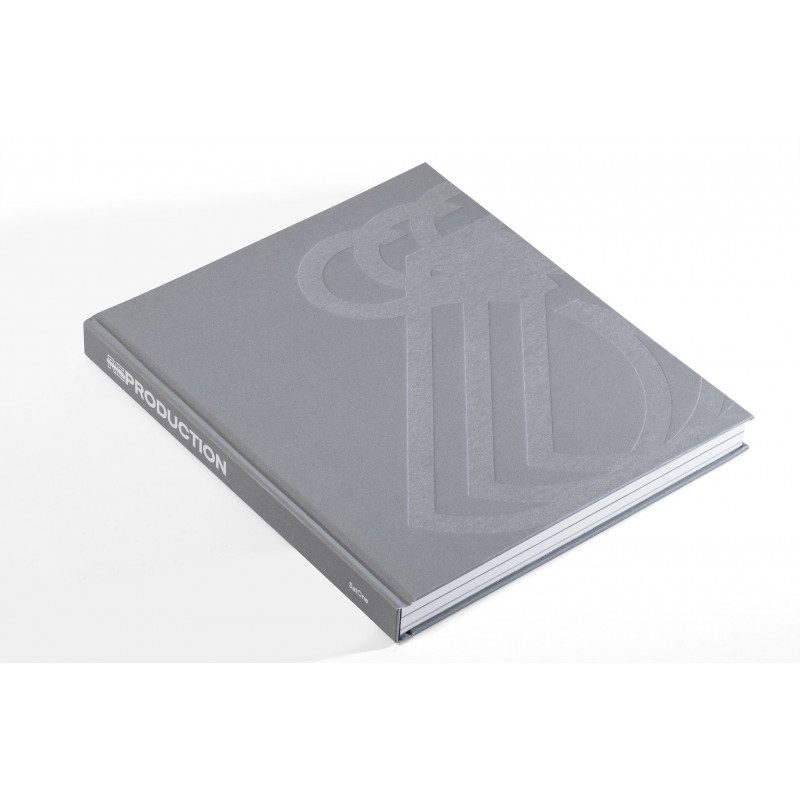 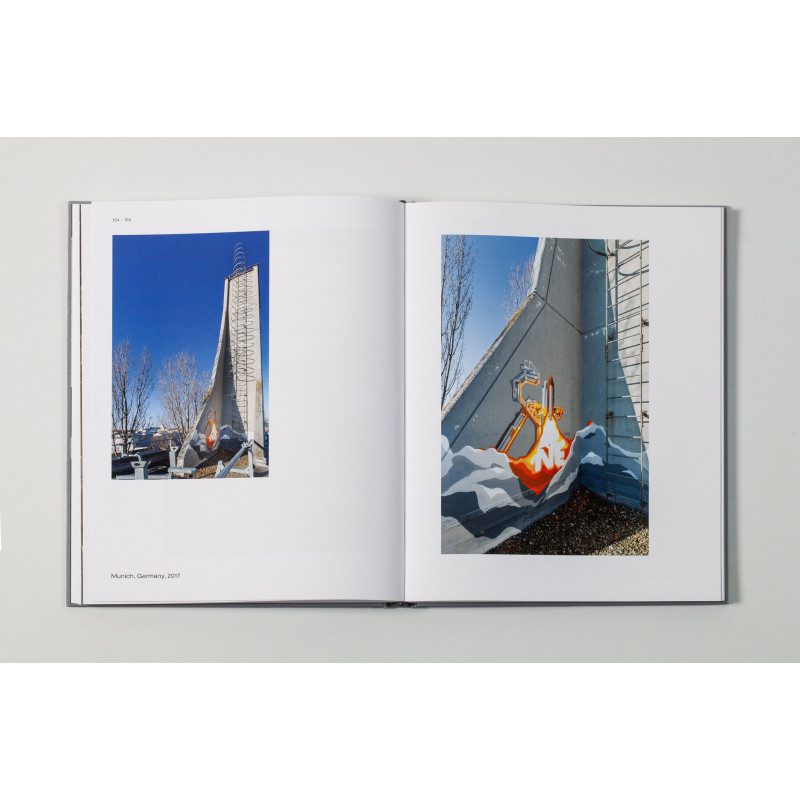 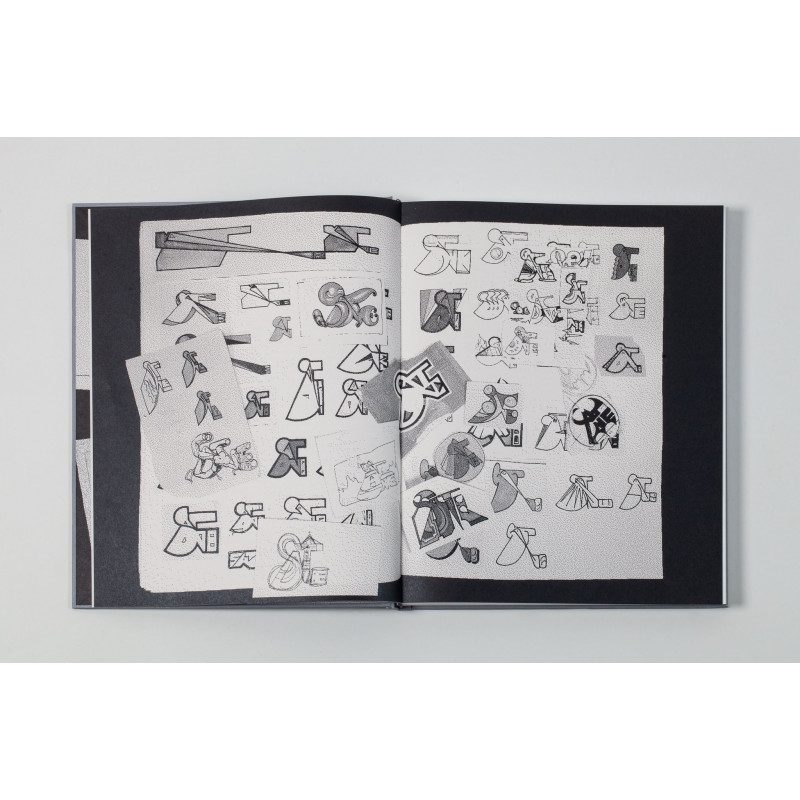 «Since 2012 the  SatOne logos have accompanied me in their special form as a travel diary to places of my profession. In addition to my mural and studio work, I created over 100 logos in many places around the world. The photos of the best pieces are now being published for the first time in one volume – most of them previously unpublished», says the emblematic graffiti artist SatOne about his fresh new book release. Like a travel diary, the recognizable logos accompany SatOne through the last eight years and are now shared in this book that he has accomplished to create with a desired concrete feel in the texture of the paper and the hardcover. The majority of locations have been deliberately selected to maintain a certain exclusivity and thus created a wide range of unpublished photos as well as a glimpse into his sketch books.

Published in association with the Brooklyn Museum. 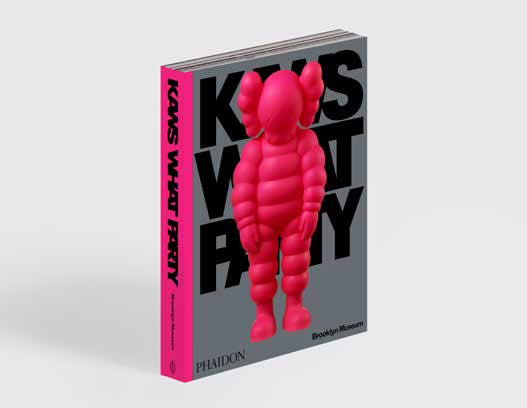 Drawing from Pop and Neo-Pop traditions, KAWS’s work straddles the line between fine art and popular culture, crossing the mediums of painting, sculpture, and printmaking, along with fashion, merchandise, and vinyl toys. After ‘Kaws Eats Alone’, this book, made in close collaboration with the artist, captures his exciting talent as never before, presenting work from across his career and exploring his unique ability to reshape the ways we think about contemporary art and culture today. The magic of an exciting talent at the intersection of traditional and current culture whose highly recognizable – and recognized – work is accessible and provocative, entertaining and challenging. This book accompanies a major exhibition opening at the Brooklyn Museum, his city of residence, in February 2021 – and includes photographs from the show itself. 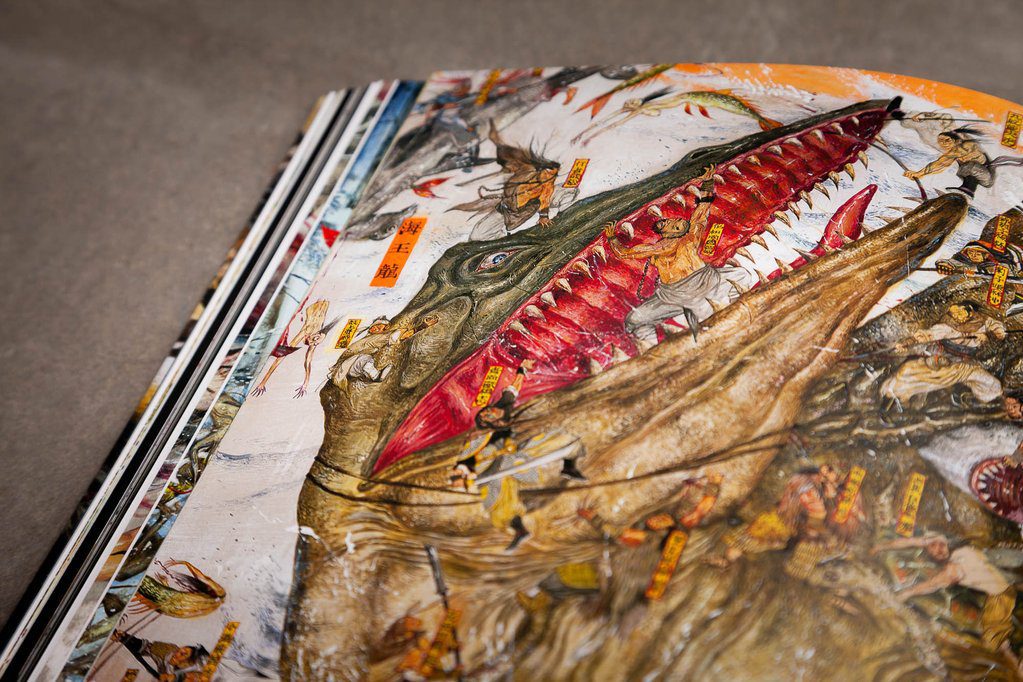 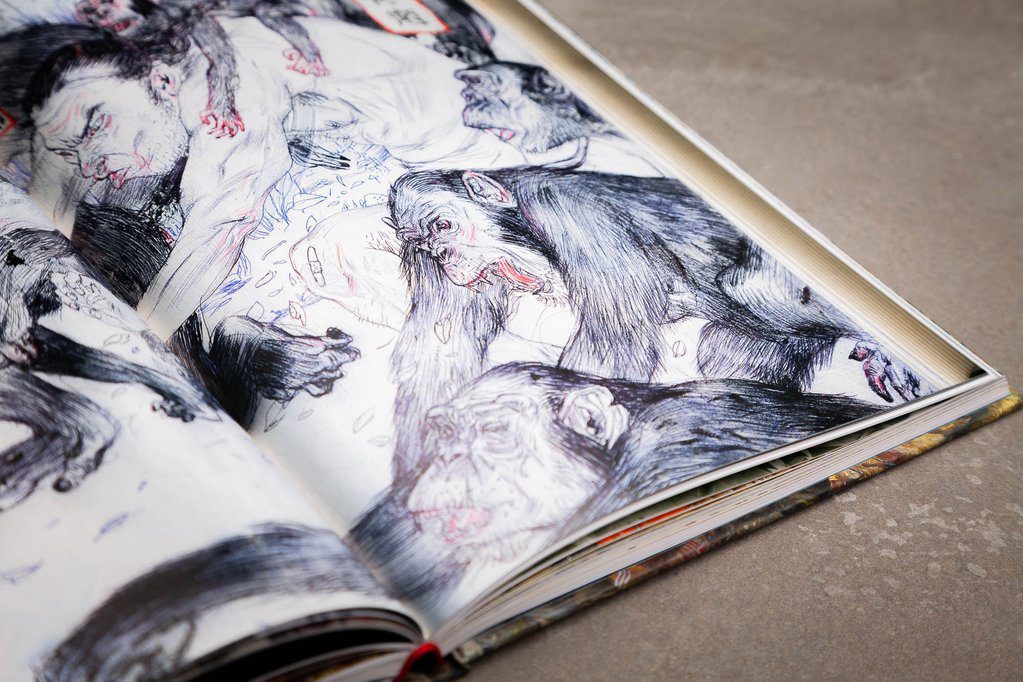 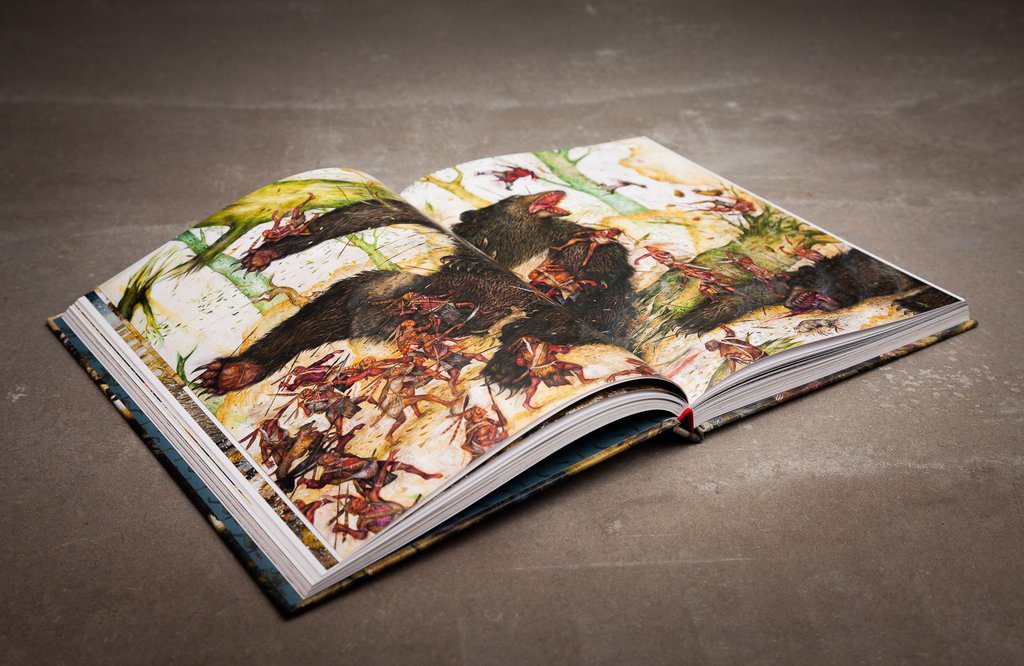 Drawing inspiration from Chinese mythology, Japanese manga and Kaiju films, Hong Kong cinema of the 1980s, and American pop culture, Taiwanese-born and Brooklyn-based artist Mu Pan has created a unique graphic universe. Throughout his intricate, violent, vibrant, and often humorous paintings, he tells epic stories and legends with modern sensibilities, where animals, superheroes, monsters, and deities confront each other on giant battlefields. With a foreword by filmmaker Ari Aster (Heredtary, Midsommar), a preface by artist James Jean, and a long conversation between Mu Pan and art critic Sasha Bogojev, this book collects for the first time all his major paintings and never-seen-before drawings and sketches. 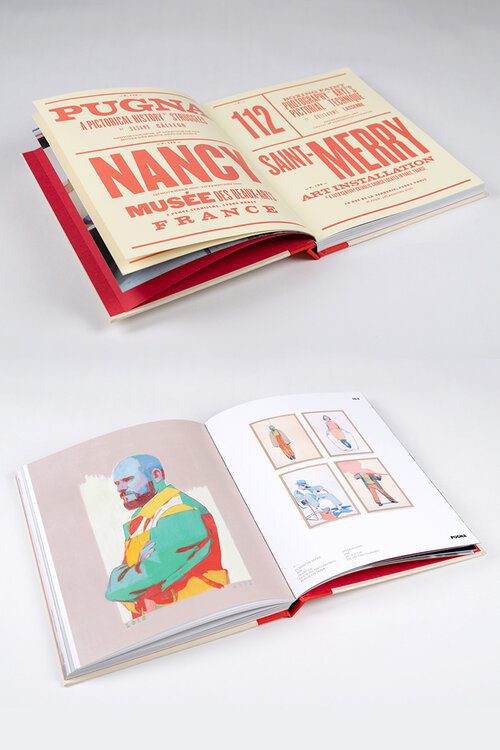 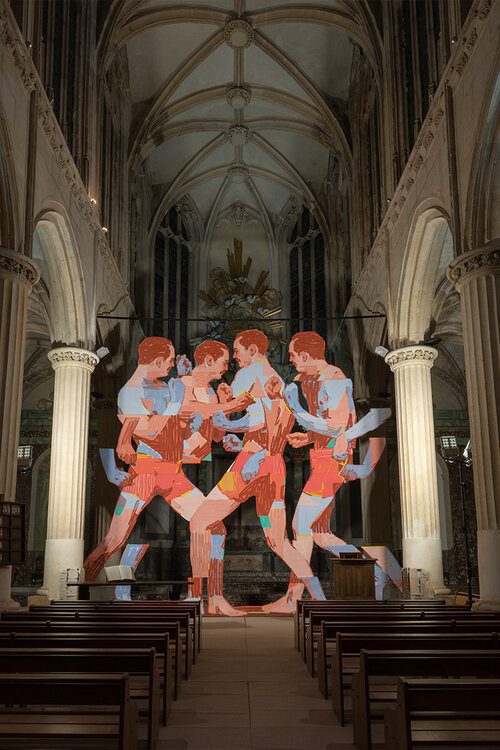 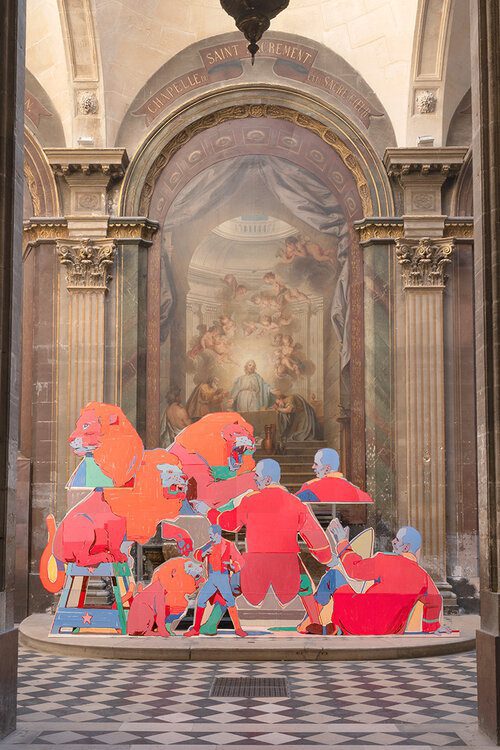 Pugna means opposition, rivalry between peoples, nations, parties or groups, especially of ideological type. This book by Spanish artist Aryz, his second one, compiles all his works shown at the three different spots during 2019: a huge installation at Rouen’s St. Eloi 16th Century temple, followed by a show that took place at Hangar107 also in Rouen and a third one at the Beaux Arts Museum in Nancy, France, plus some extra content never exhibited. The book was presented on a Kickstarter campaign so Aryz could accomplish the challenge of publishing it with the help of his supporters. «The book compiles a huge body of images. Each image was a challenge, with more or less risk. We’ve adjusted the costs and the profit margin as much as we could, but if we achieve our goal with this campaign, we will be able to print the book successfully», said the artist during the campaign process last summer. In a record time the artist achieved his goal and the book has been successfully printed accompanied by texts by Nicolas Couturieux, curator and producer, Stéphanie Lemoine, art historian and journalist, Susana Gállego, senior curator and director of the Musée des Beaux Arts de Nancy and Guillaume Laserre, independent art critic and exhibition curator. A must have gem in your collection. 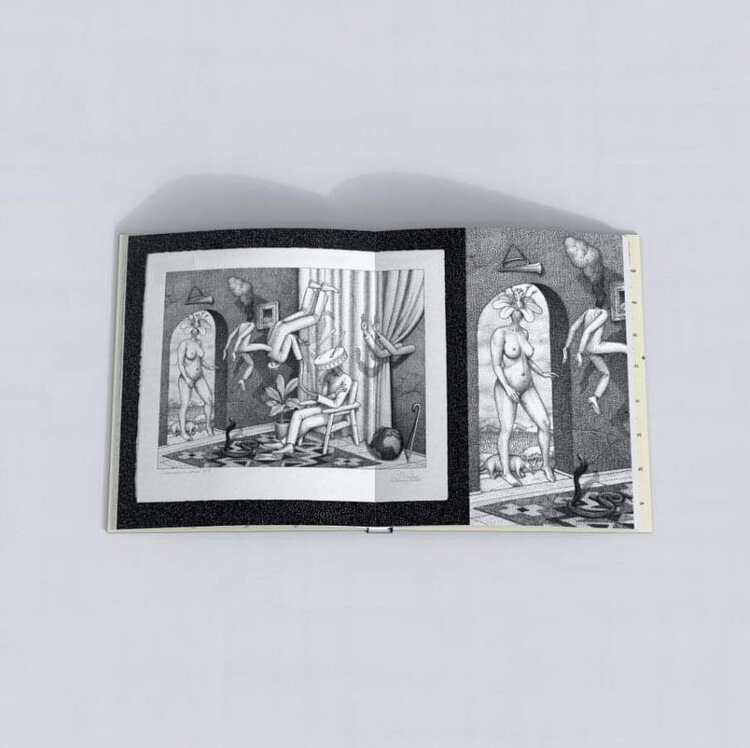 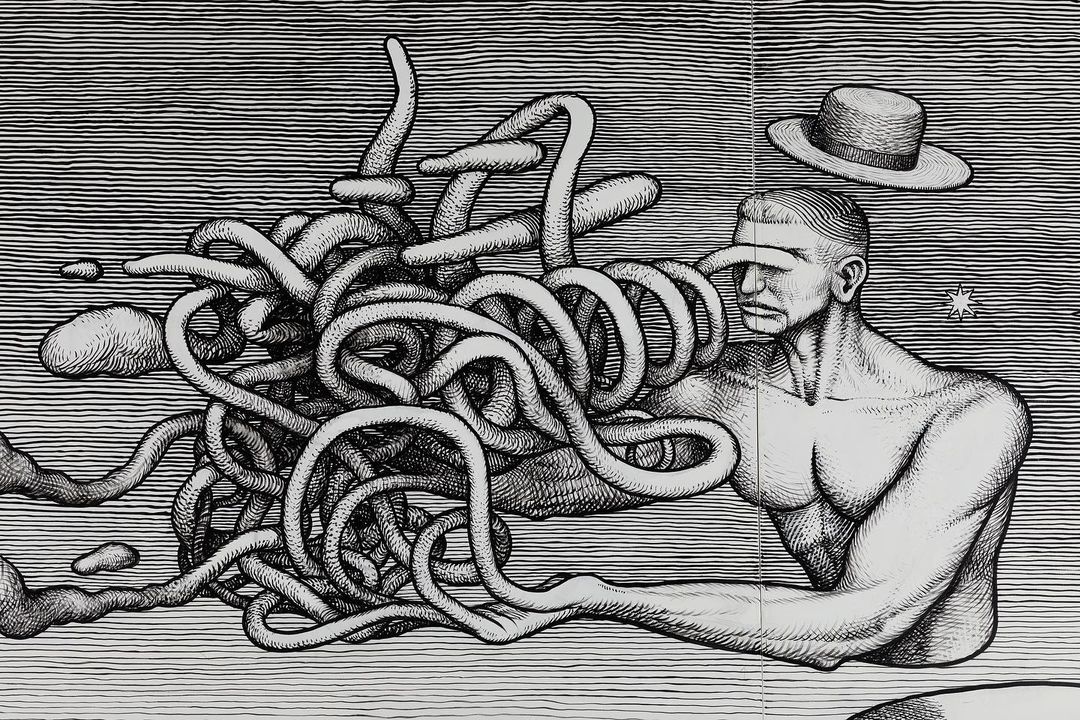 «To me a book is a sacred object. Even in early childhood, books were doors to other worlds; their illustrations would play a decisive role in shaping my artistic vision. Many years later, when I was already a muralist and traveling constantly around the world, my passion for books only intensified», says artist Waone Interesni Kazki about his personal relationship with books. «I would bring back a book from every trip, and sometimes my whole suitcase was full of books. I got to put together a collection of art books from all over the world, and each book continues to delight and inspire me. Creating my own book has been a dream of mine for decades, and now it has become a reality», he continues. This first book focuses on his monochrome artworks (black-and-white murals, drawings, inks on canvas), created between 2013 and late 2020. A book to examine the most minimum details while also appreciating the complete artwork. In his own words, «a pleasure that digital viewing cannot replace». The book has been publish by Wawe Publishing, a new publishing house founded by the artist to produce his books and help other artists realize their own visual projects. 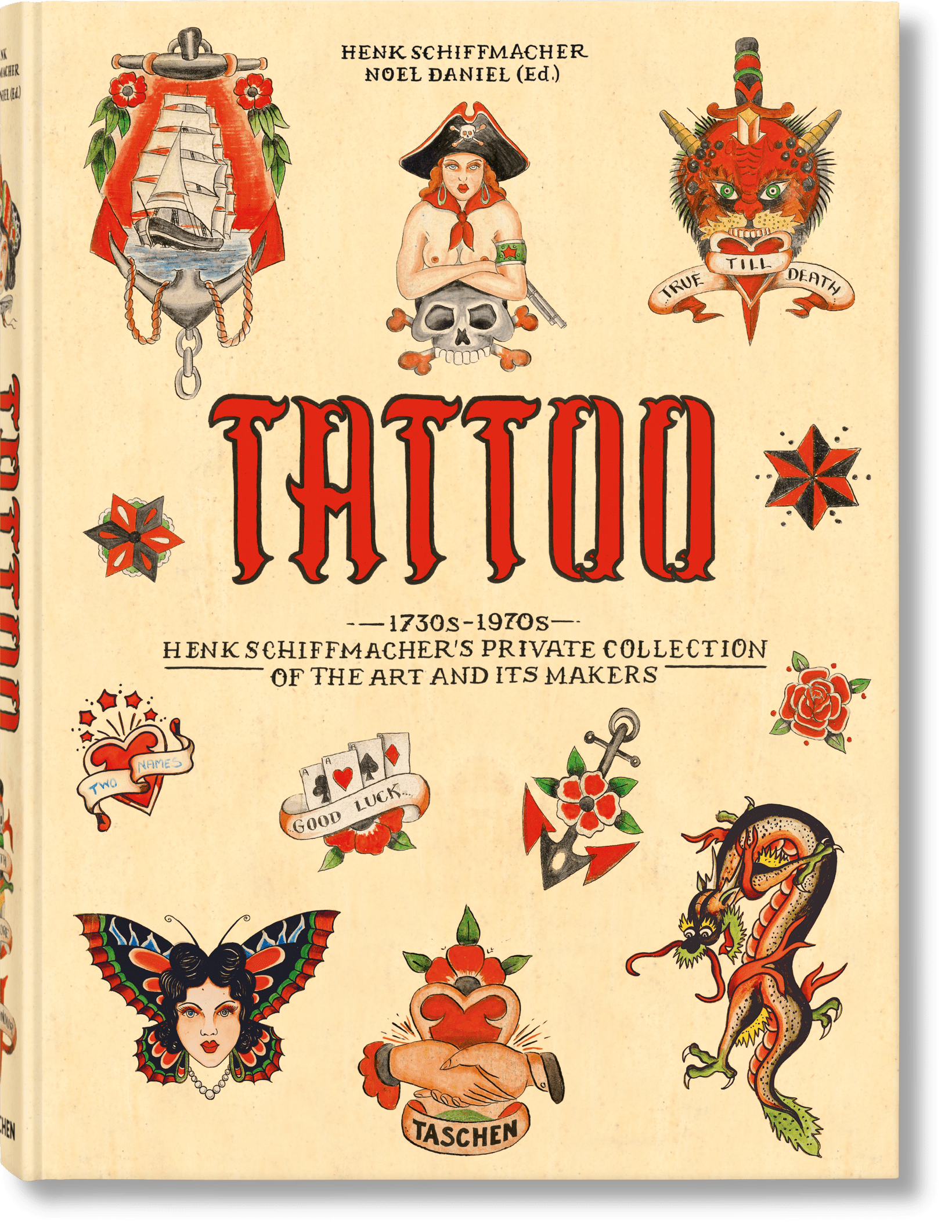 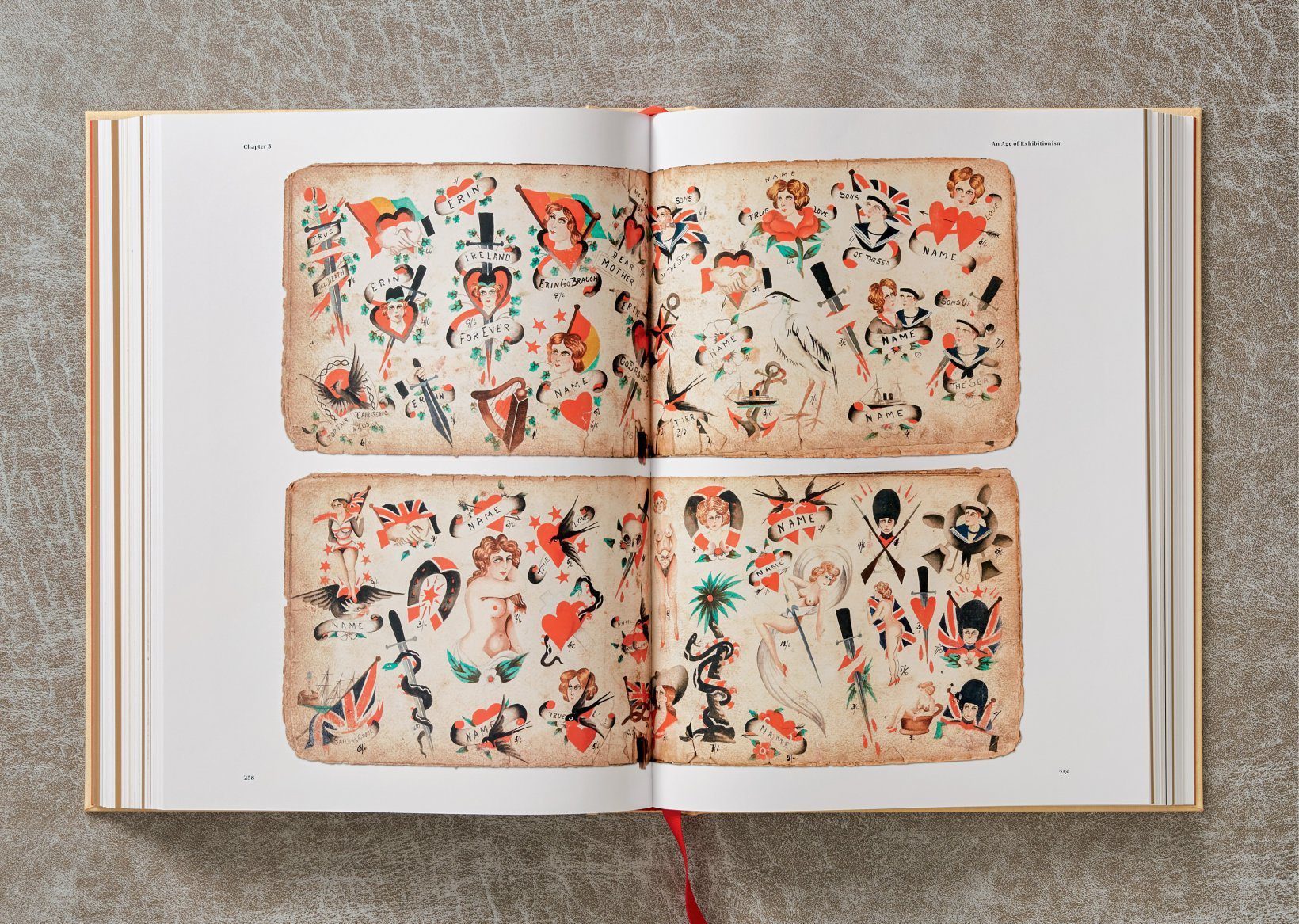 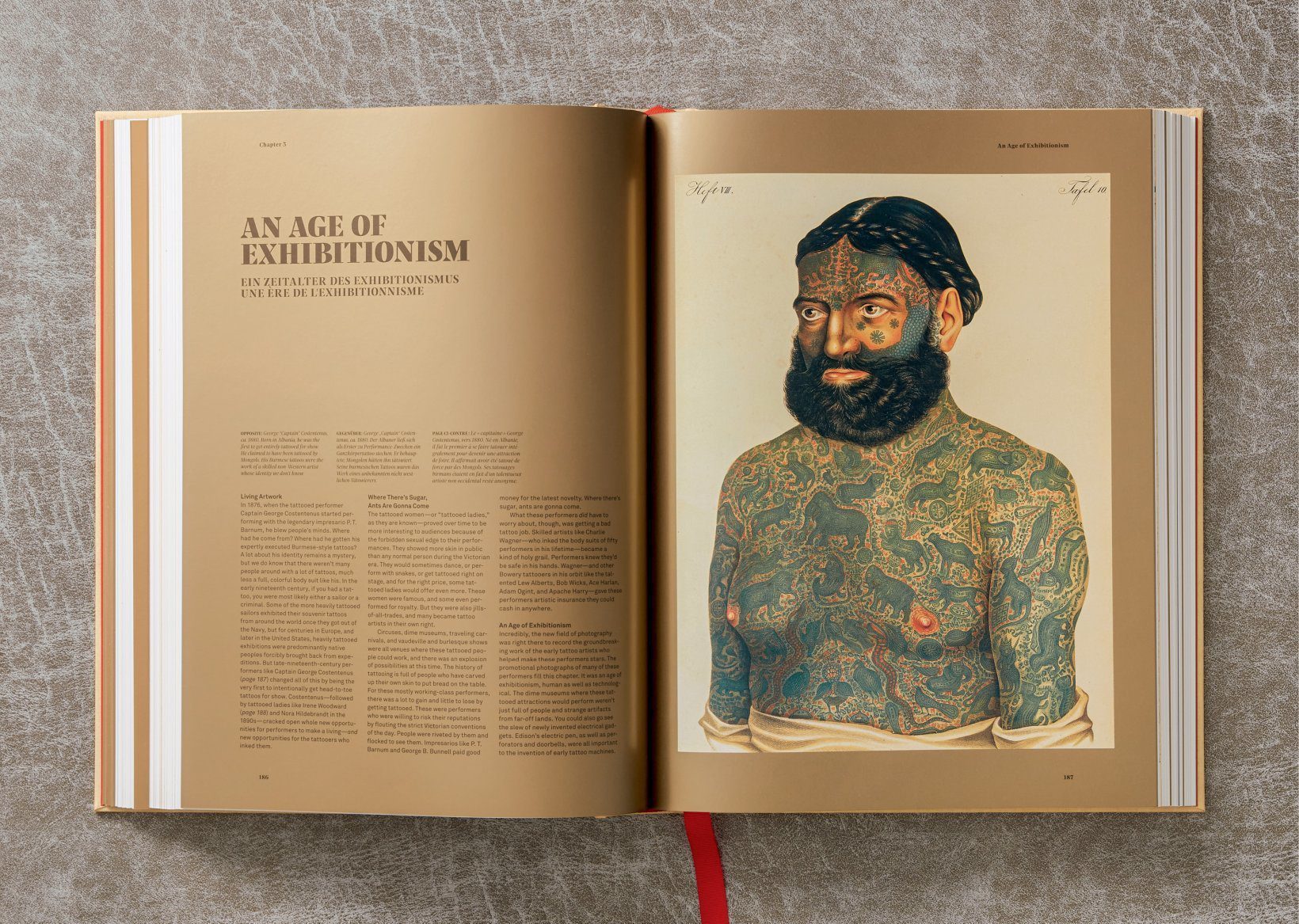 Legendary tattoo artist and historian Henk Schiffmacher (Netherlands, 1952) known as Hanky Panky takes us on a personal journey through the history of tattooing from the 1730s to the 1970s in this oversized book of stunning tattoo artifacts and designs. The artist that has tatooed rock stars such as Red Hot Chilli Peppers, Pearl Jam or Kurt Cobain himself is showcasing over two hundred years of worldwide tattoo history in a book that brings together the best of Schiffmacher’s renowned private collection with lively personal commentary by the art’s most beloved raconteur and philosopher. The book will be on sale this December with a first edition of 10,000 numbered copies. 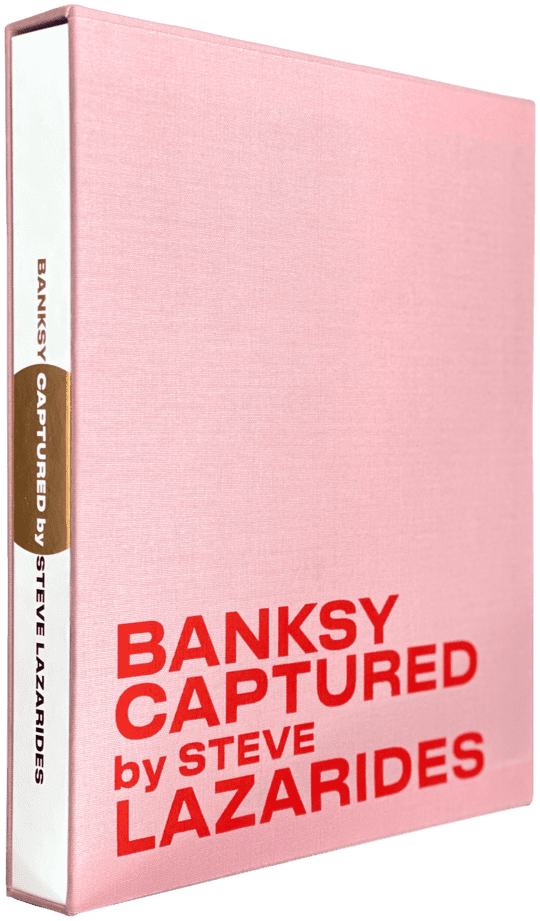 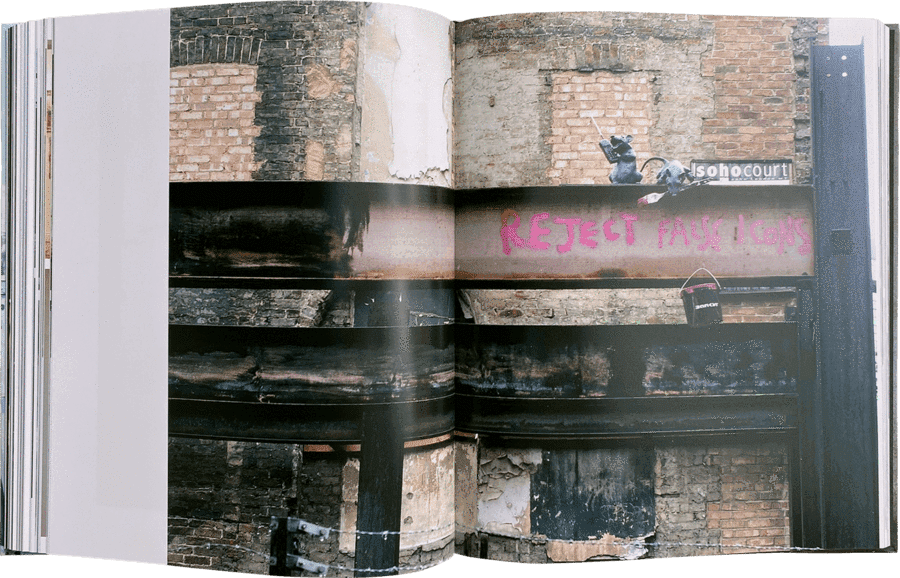 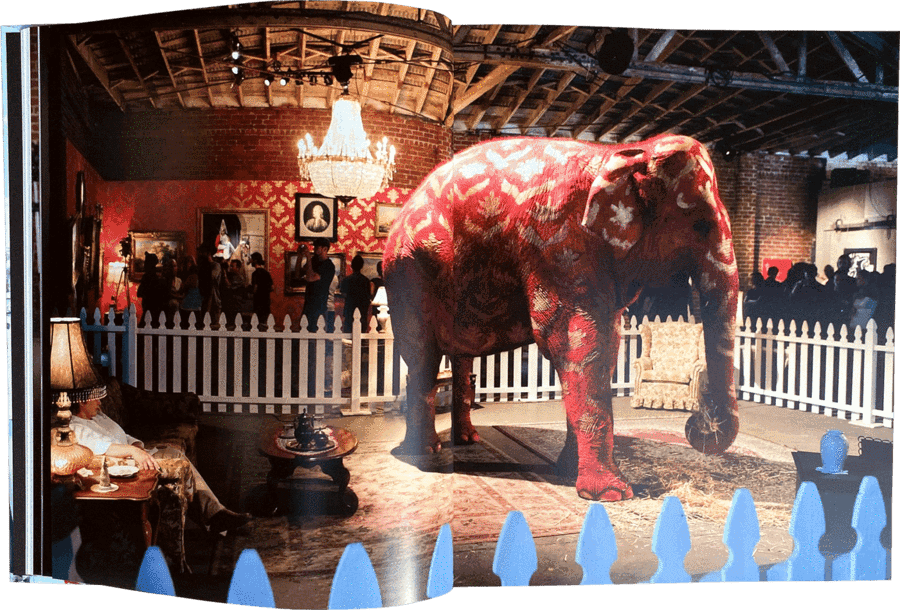 Round two for Steve Lazarides and Banksy combo. The sequel launched this last September is featuring all-new photographs and back stories showcasing Banksy’s golden period in the late 90s and early 2000s, with a vast majority of images never published or seen before, which negatives lay in Lazarides’ hands for many years. The book includes emblematic artworks such as Girl with Balloon over Piccadilly Circus, The Natural History Museum and Tate Britain installations, Crude Oils and Barely Legal exhibitions, the statue drops and much more. A true art legend and the story of a man able to articulate the voice of a subculture that made its way to the mainstream. The first 5,000 books are numbered and stamped. Don’t miss out!