What to read, see and listen by Icy & Sot, Raisa Álava and Andrés Lozano 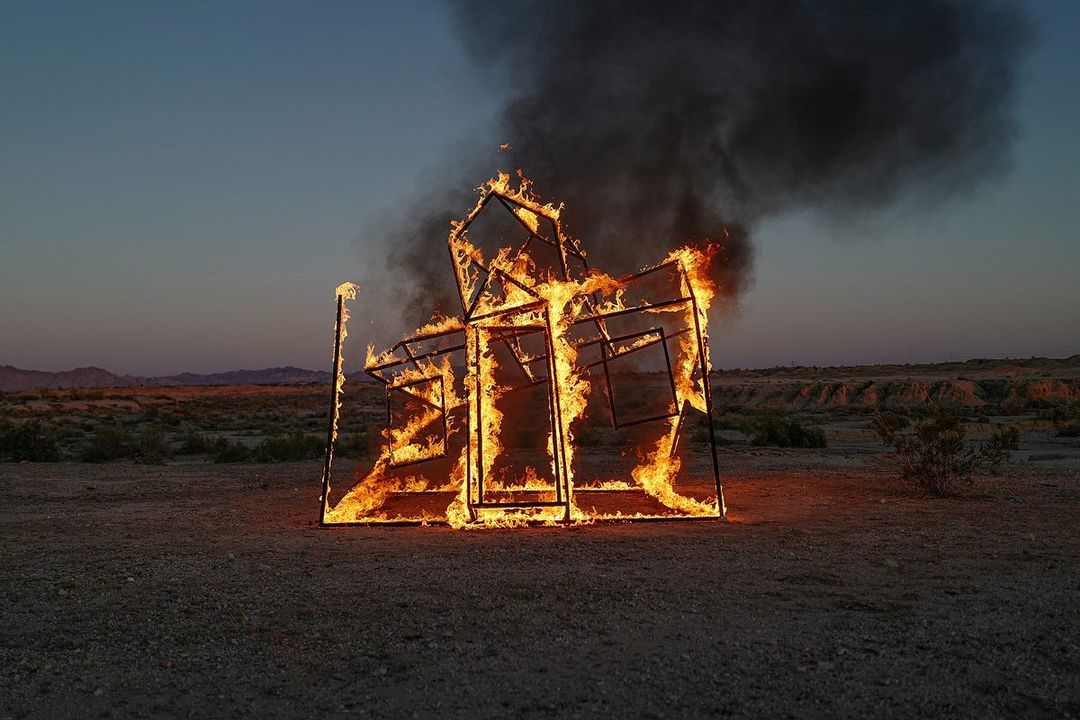 We dive into some soul and funk rhythms with Iranian brothers artists Icy & Sot’s favorite playlist and discover with them several documentaries of key figures in the art world. We go visit the latest exhibition at La Alhóndiga in Bilbao with the illustrator and ceramist Raisa Álava and we get into the pages of the most refreshing crime novels recommended by the London-based artist Andrés Lozano from Madrid for this summer. Let’s go!

Saman Oskouei (1985) and Sasan Oskouei (1991), are ICY & SOT, Iranian artists based in Brooklyn, New York, who through their unique visual language, have managed to generate powerful and moving art projects that narrate about the current human condition, addressing important issues such as human rights, detention, women’s rights, the plight of migrants and refugees, climate change or the pitfalls of capitalism. Their commitment is reflected in the materials with which their works are made: barbed wire, iron wire, old rusty shovels or oil cans. All of them raw materials that the artists divert and transfigure to give life to art pieces full of poetry and fragility. Icy & Sot do not seek to give lessons, but rather to reflect the truth of our time through their own language and turn it into a work of art. 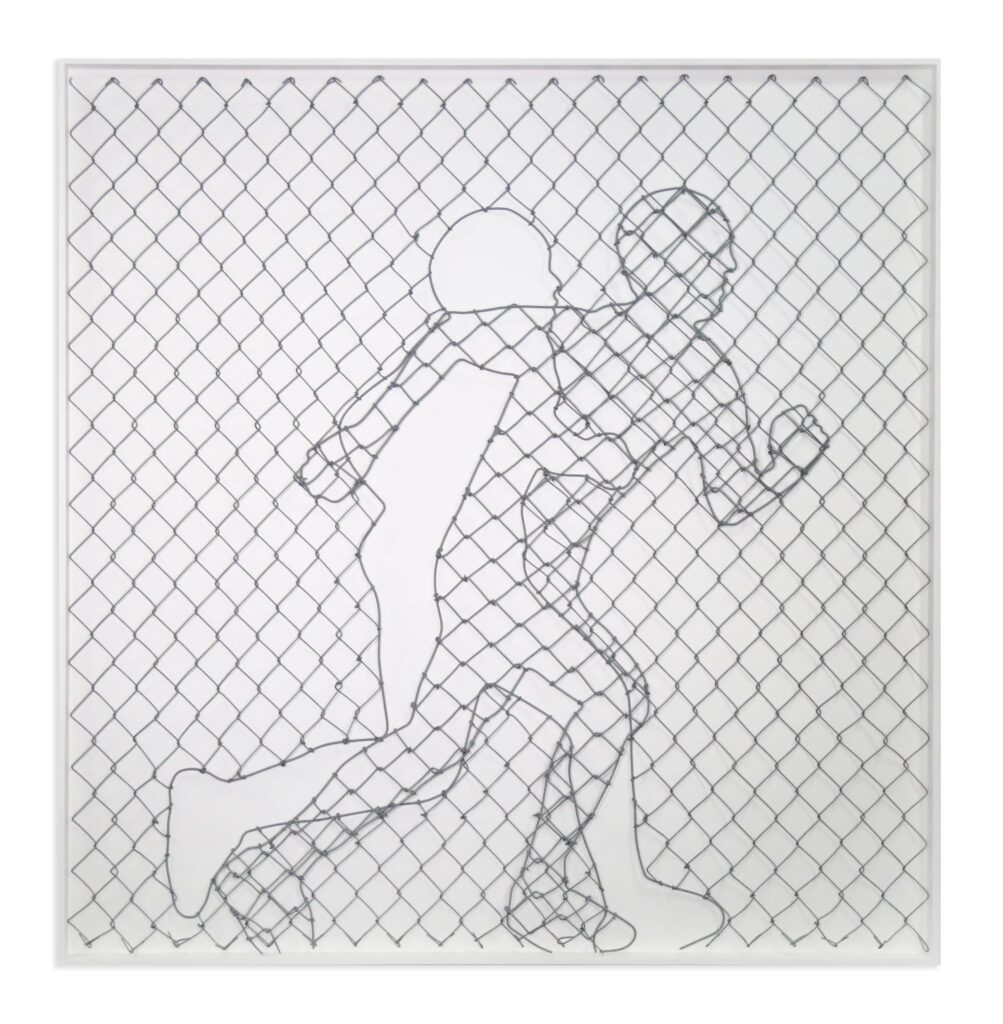 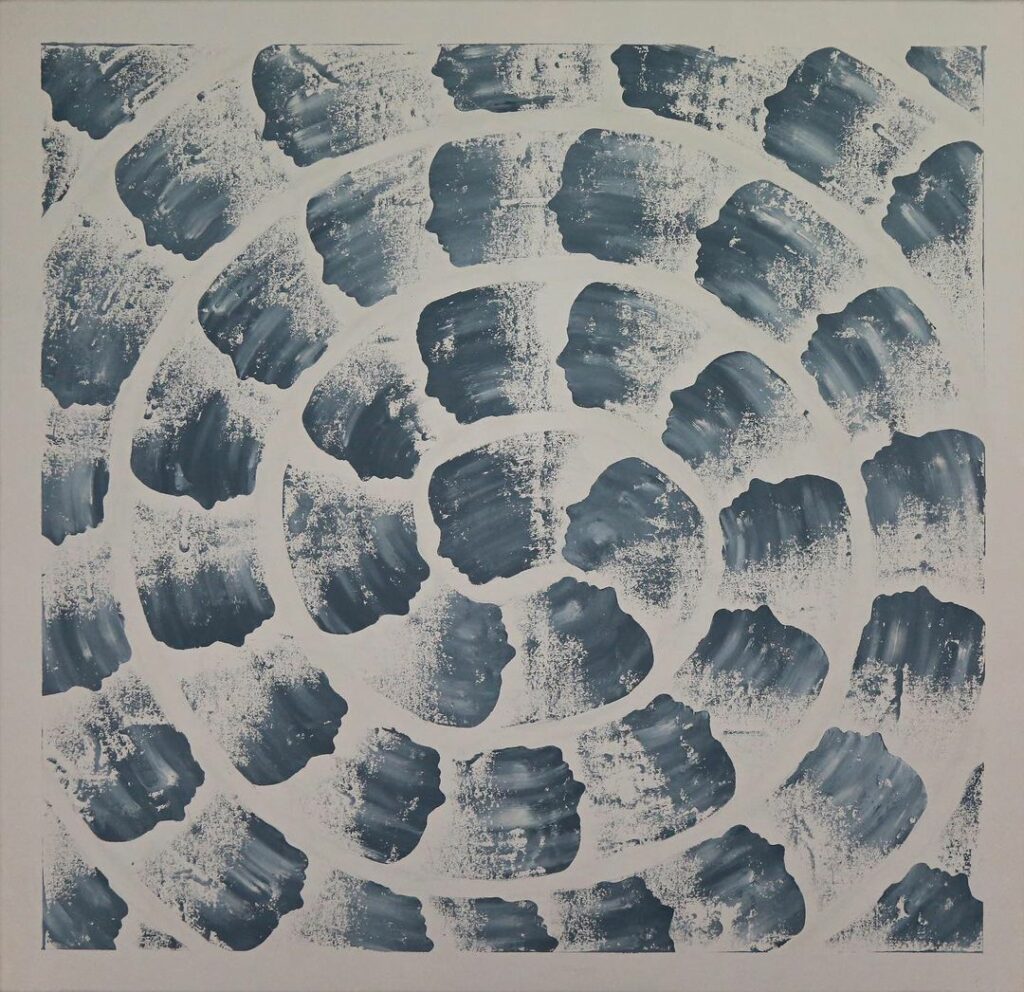 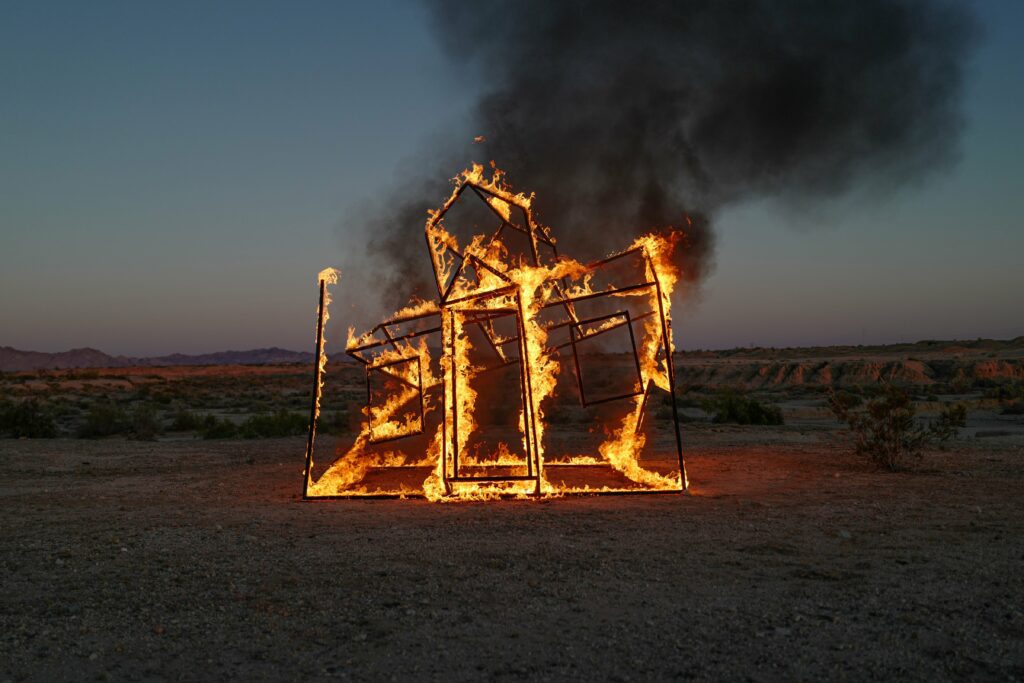 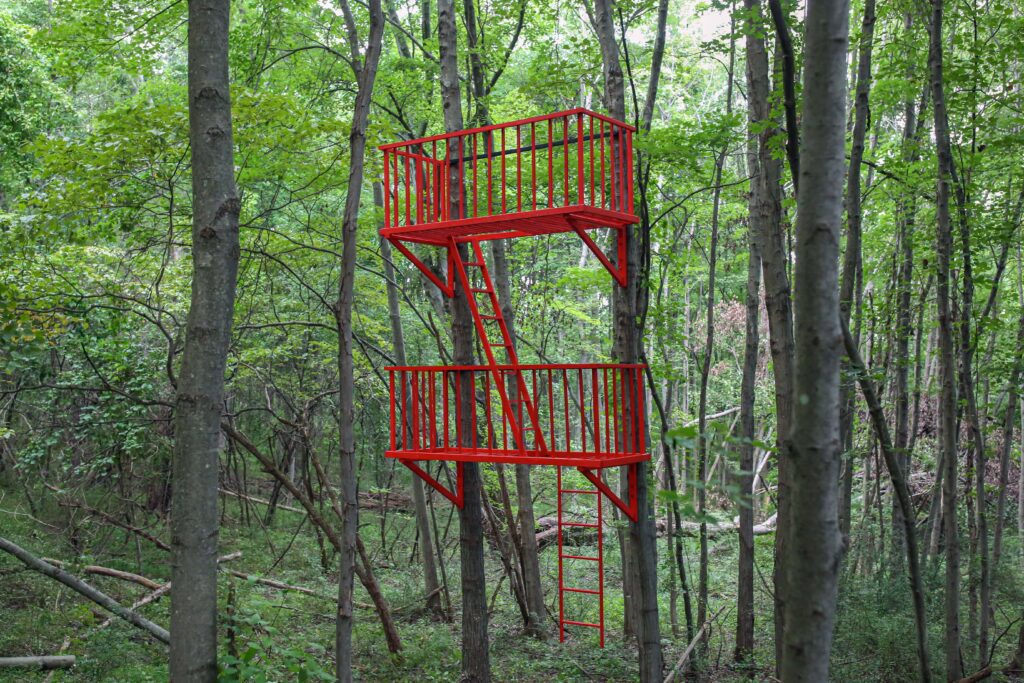 Our film recommendation would be from our all-time favorite director Abbas Kiarostami with “Where Is the Friend’s Home?” (1987), “The wind will carry us” (1999) and “Close-up” (1990). His films are marked by an unforced intimacy, by the certainty that the most interesting struggle in life is that any human being can live on their own terms.

We recently enjoyed watching Agnes Varda’s five-part mini documentary series called “From Here to There” (2011) a freewheeling travelogue on the contemporary art scene and a loving ode to creativity in all its forms. Also loved learning more about Christo, watching some documentaries about him and his longtime collaborator Jeanne-Claude. He was the Environmental-art superstar, who passed away in May last year. “Christo in Paris” (1990), “Running Fence” (1977) and “Christo’s Valley Curtain” (1974). These all could be seen on the Criterion platform which we recommend subscribing to.

We listen to a lot of music, so online radio has been a great way to keep discovering new music, Thelotradio.com is our local online radio station live streaming 24/7 with the most varied music NYC has to offer. Also WFMU the night owl show if you are into rock’n soul,  and check these international sounds, soul and folk playlists by our friend Rahill: Songs of Dissidence, Lonely boys and Rahill NTS residency.

There are a couple of artists that we have been diving deeper into their work and admiring them so much. Simple and amazing video performances by Harrison and Wood, Gordon Matta-Clark large scale installation pieces cutting abandoned houses, Erwin Wurm’s One-minute sculptures, Doris Salcedo’s deep work that gives form to pain, trauma, and loss, and Brian Goggin’s vibrant layering of found objects and chaos-provoking sculptures.

Also, our idols that we are lucky to call friends John Fekner and Don Leight. Don passed away in April this year. His work always reflected the times with strong messages, active since the 70’s, he didn’t care if his works were going to be shown in a gallery or a museum, he just loved creating art. A true Artist.

Based in Bilbao, Raisa Álava (Zuaza, 1990) works in the fields of drawing, engraving, silkscreen printing, illustration and ceramics. With them she explores lived and imagined experiences, collective memory and random thoughts. A renewed language, far from hierarchies and traditional codes of proportion and composition and rather close to the excess of elements and the use of others in a recurrent way, which are already part of her personal imaginary. Raisa tells stories through new forms of narratives that she builds through elements that arise from the randomness of her own hand. Don’t lose track of her work and check out her recommendations for the summer. 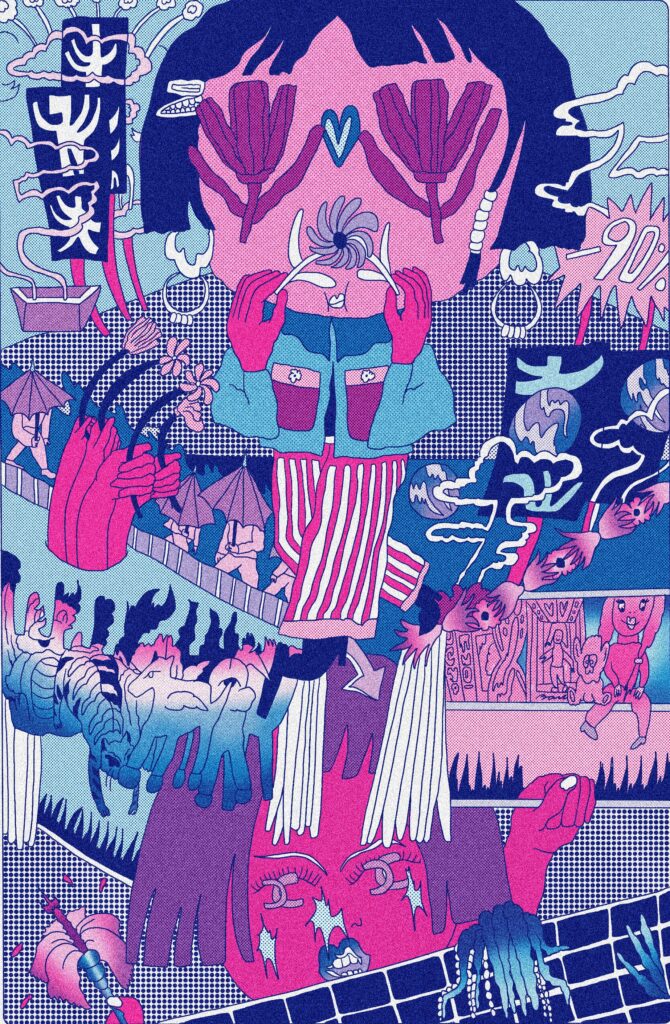 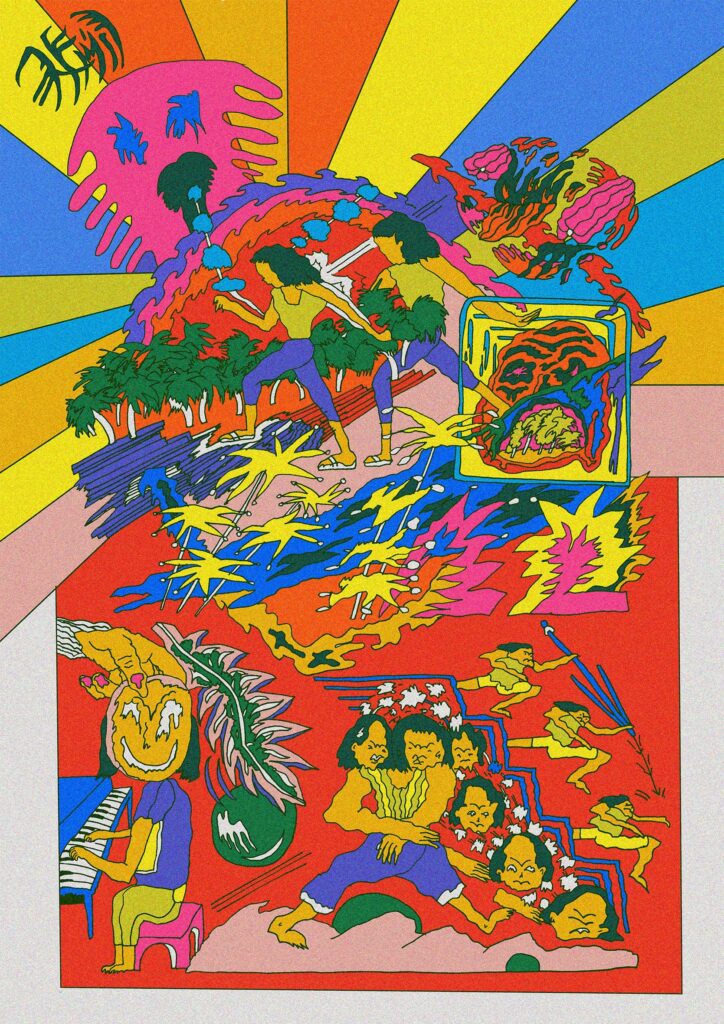 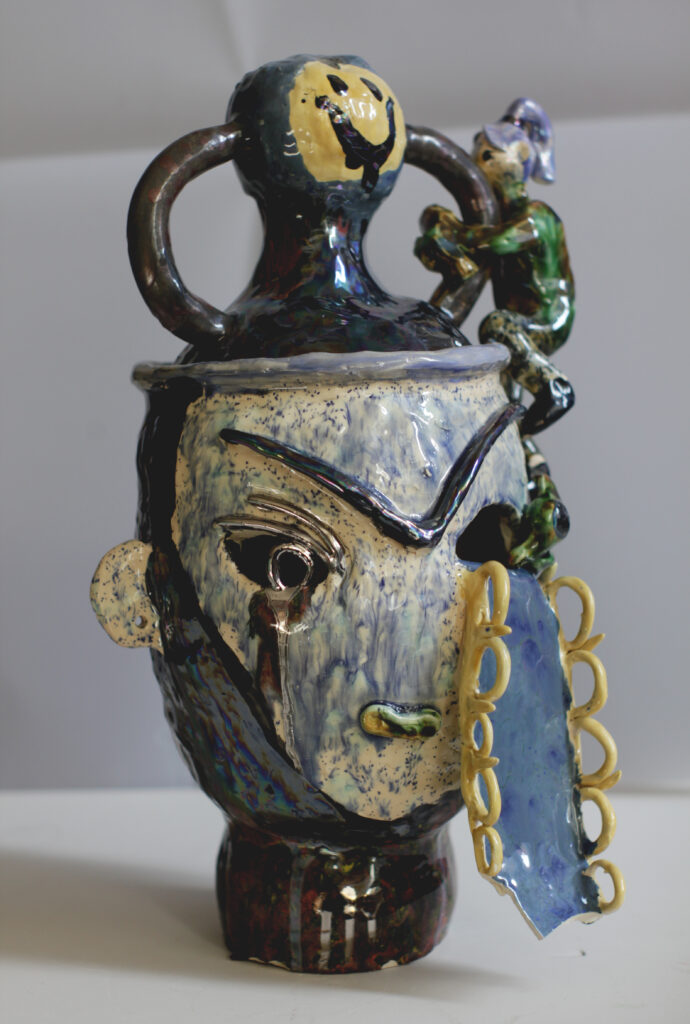 I just finished reading “Un amor” by Sara Mesa. It makes me want to jump into the book and tell the protagonist that she has been a complete fool, even if that’s impossible. If there is something I have to thank confinement for, it is that it has given me back my passion for reading. I never really lost it, but now it’s more obsessive. Another thing I love are comics, the last ones I have read are “Hoops” by Genie Espinosa and what I like the most are the monsters by Emil Ferris, both wonderful. Now I want to buy “Grip” by Lale Westvind, I love the drawing.

To draw I usually make a playlist and each one corresponds to the mood I’m in at the moment. It’s amazing how music conditions me. When I want to listen to someone talking I put on the podcasts of Deforme Semanal, Estirando el Chicle, Negra y Criminal or the Youtube channel Pasta Grannies, where 90 year old women are cooking wonders. Right now I get up to eat something every time.

Yesterday, tired of sitting, I got up to stretch my legs (I live in Bilbao) and ended up at the Alhóndiga seeing the excellent exhibition of Ana Laura Alaez. She defines herself as an architect of emotions, and for me she has hit the nail on the head. I was thrilled to see something so mature and so timeless, it’s magical.

Andrés Lozano (1992) is an artist and illustrator from Madrid who lives and works in London. His recent practice seeks to explore the link between art, making and improvisation through a series of semi-biographical paintings that materialize a world of apathetic and lonely characters surrounded by nature and interiors. Andrés usually works on large canvases using acrylics, oils and spray paint. He has published illustrated books and has done illustration work for The New York Times, Google, The Washington Post and McSweeney’s. Here are his recommendations to expand your must-see list. 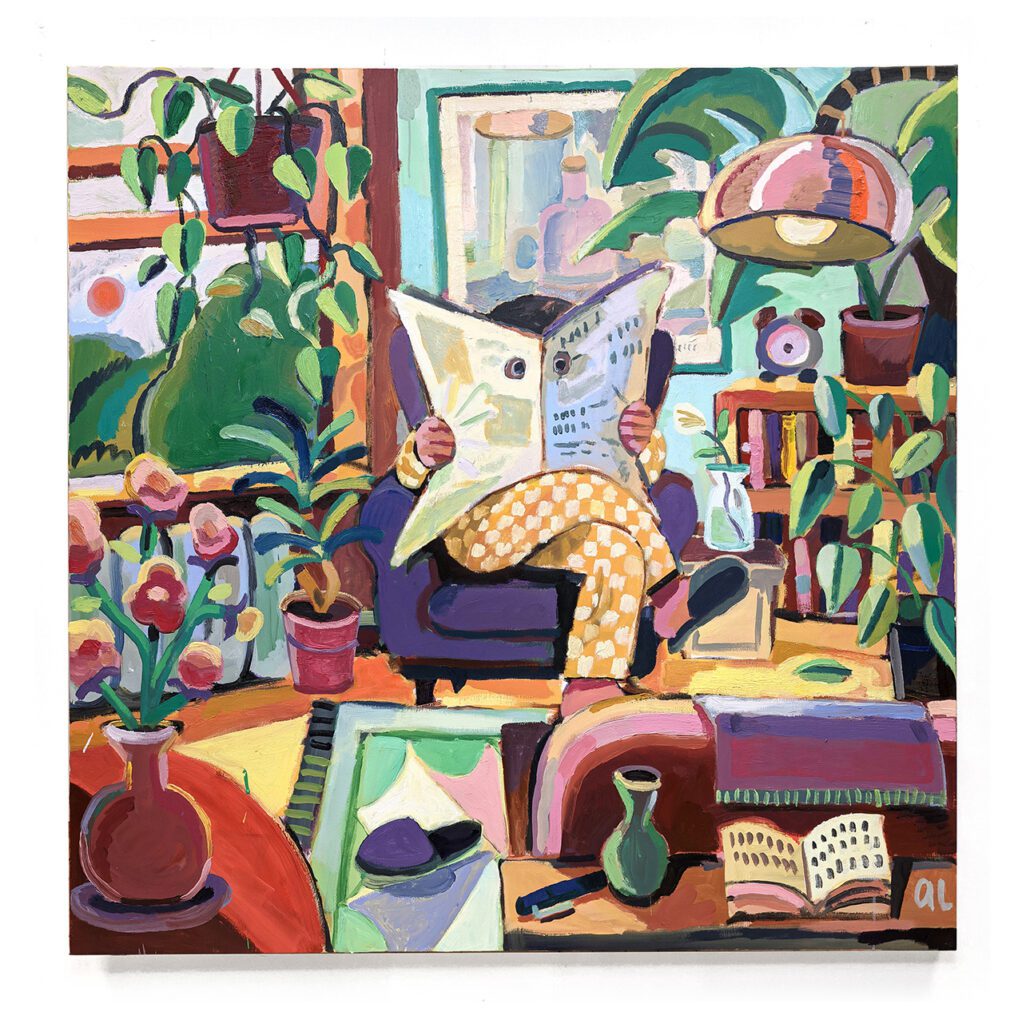 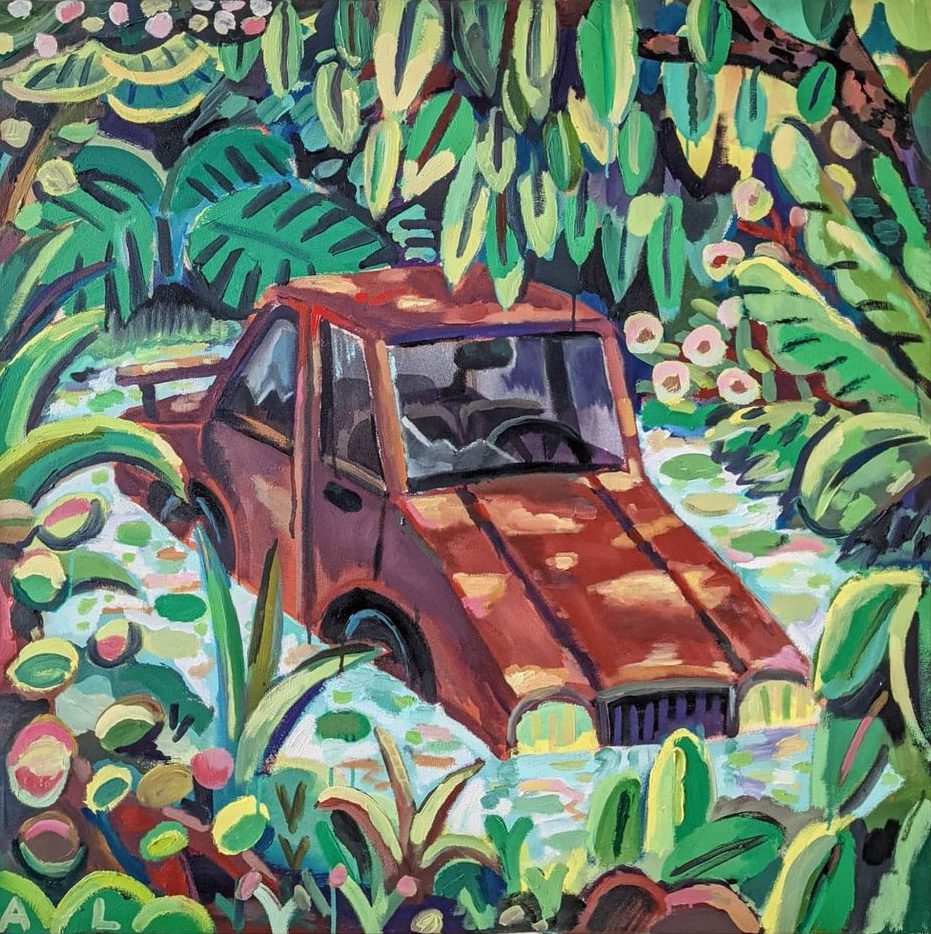 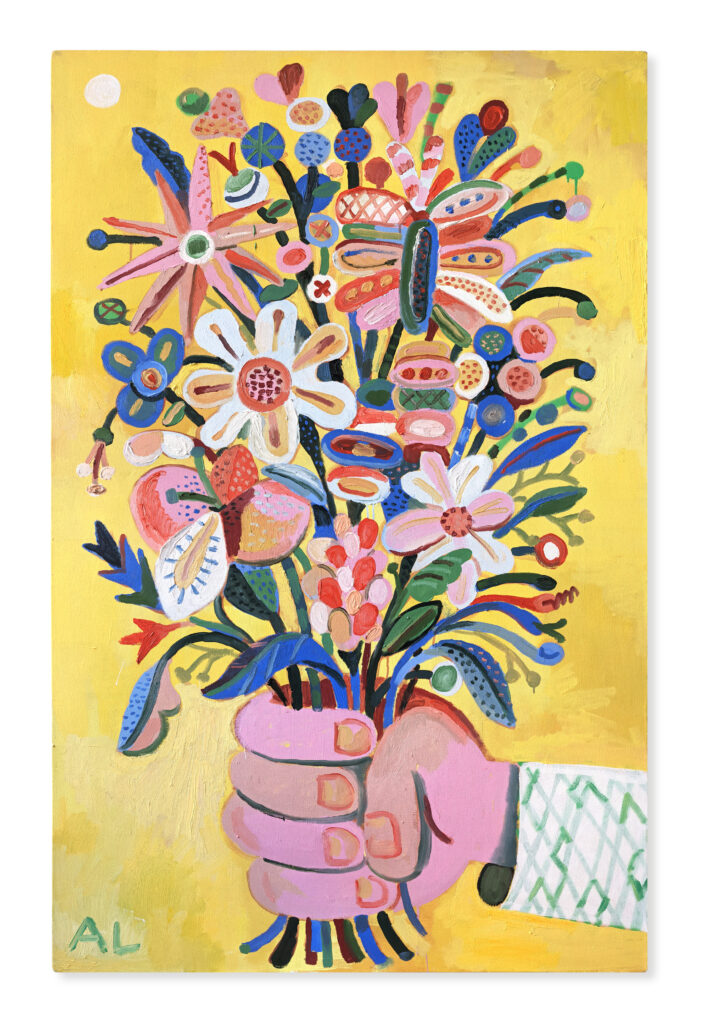 Lately I’ve been listening almost exclusively to “Revolutions” a history podcast by the American Mike Duncan, each season is dedicated to one of the great revolutions of history, starting with the English revolution and ending with the Russian one. Learning about history is not only very interesting but also a good way to have perspective and not go crazy, especially in times as hectic as the present.

From music I have been listening to among many others Knucks a London rapper, Post Nebbia an Italian psych/funk pop band and the new album by Squid, an English post-punk band.

A book that I read recently and that I really liked is “The snow was dirty” a very sordid novel by the Belgian George Simenon. Now that summer and vacations are coming I will probably reread some noir genre, I especially like Raymond Chandler and Patricia Highsmith. I also have a lot of fun with the American satirical author David Sedaris.

As for film and TV I consume a lot and not all of it particularly good, but I recently watched the BBC prison miniseries “Time” with Sean Bean and Stephen Graham which although very tough I found brutal. I will also repeat what my gallery partner Helen Bur said in a previous article of recommendations and recommend the documentary filmmaker Adam Curtis, his latest series “Can’t get you out of my head”, although quite long, is very interesting. Finally, any film by my favorite director Paul Thomas Anderson, but especially “Punch Drunk Love”.

I recently discovered the post-impressionist painter Edouard Vuillard and have fallen in love with his work, some artists that inspire me are Makiko Kudo, Jake Longstreth and Louis Fratino among many others.