An artistic playlist for this summer 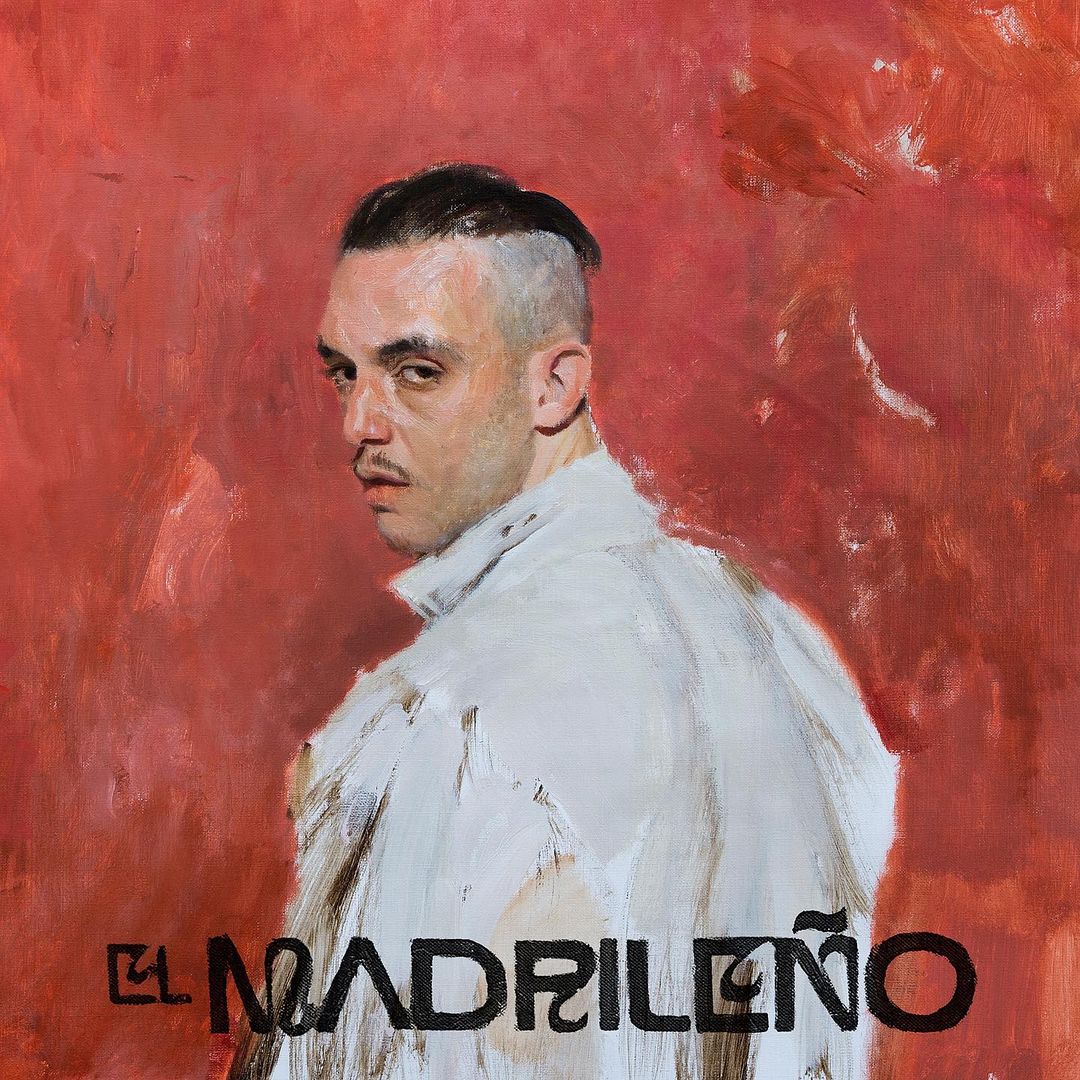 We’ve all bought a book for its cover or been interested in an album by its album cover. But have you ever wondered who are the artists behind these designs? We bring you some of the greatest collaborations between music stars and our favourite artists harmonised on records of then and now. Press play and let yourself be carried away by the rhythms of the most artistic playlist!

El Madrileño (2021) has marked a before and after in Spanish music, becoming the best debut of a Spanish album on streaming platforms such as Spotify. C. Tangana‘s second studio album has left no one indifferent, nor have the covers of his singles and the album itself. Since the release of the first single Demasiadas Mujeres, the name Van Vuu began to bethe talk of the town; Ivan Floro is the artist and muralist behind these works that captivated the singer’s followers with his pictorial style close to impressionism with an avant-garde touch.

Their collaboration came about in the most millennial way possible: through Instagram. Several people from C. Tangana’s production team followed the artist on social media, showed him Floro’s work and the singer decided to incorporate him into the conception of the album. Together they found the balance between the ideology of the album and what Van Vuu was looking for in his personal work. Using the aesthetics and imagery of the music videos, Van Vuu illustrated three tracks on the album: Comerte Entera, Demasiadas Mujeres and Tú me Dejaste de Querer. It was during the filming of this last song’s videoclip that the perfect image for the cover was found in a snapshot taken of C. Tangana. Van Vuu portrayed the photograph with his characteristic style resulting in the vibrant and magnetic album cover of El Madrileño. 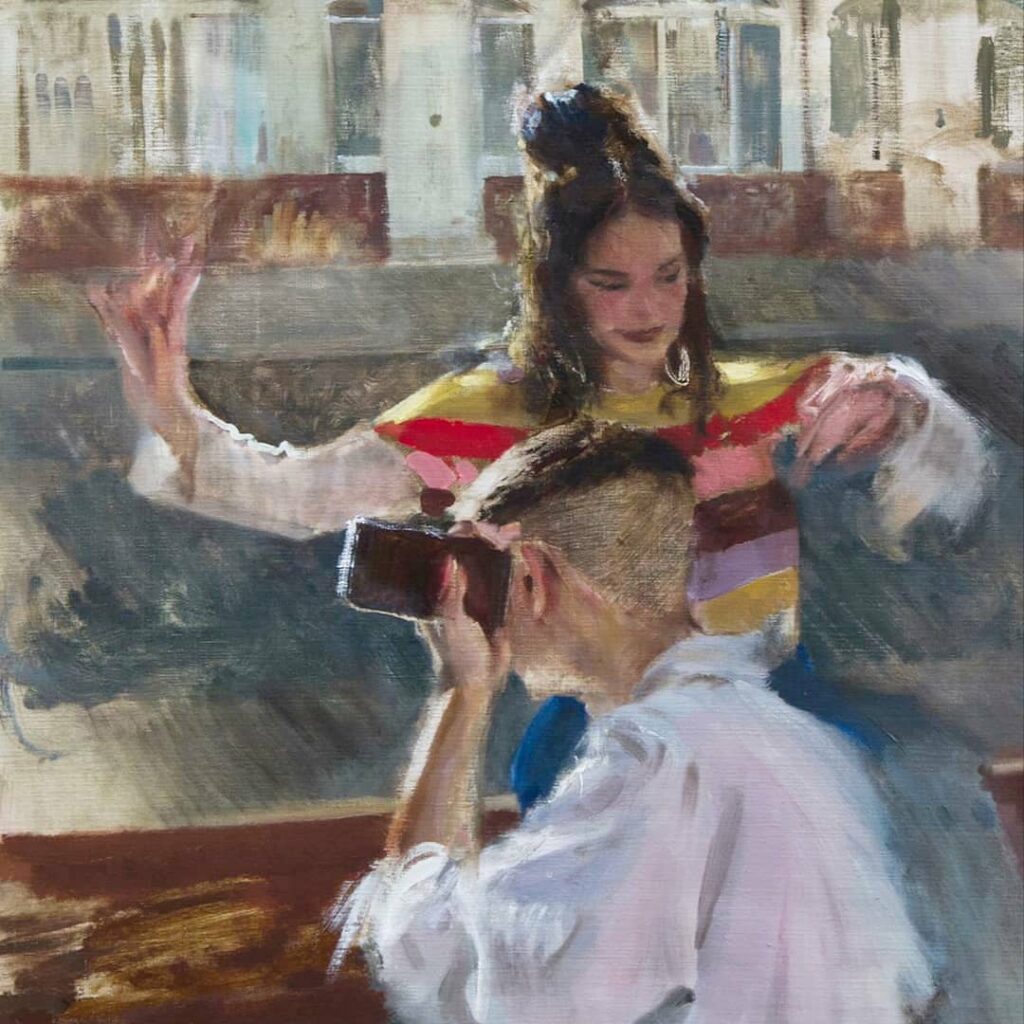 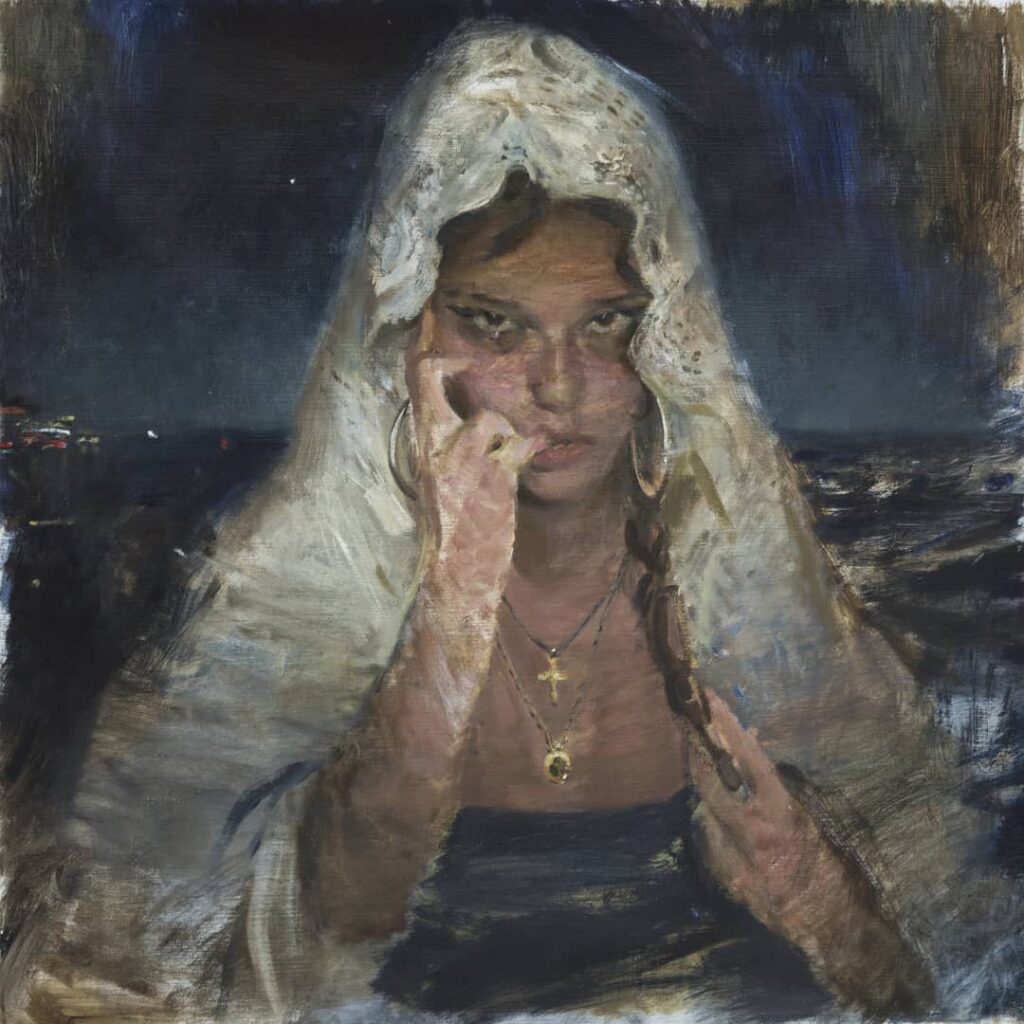 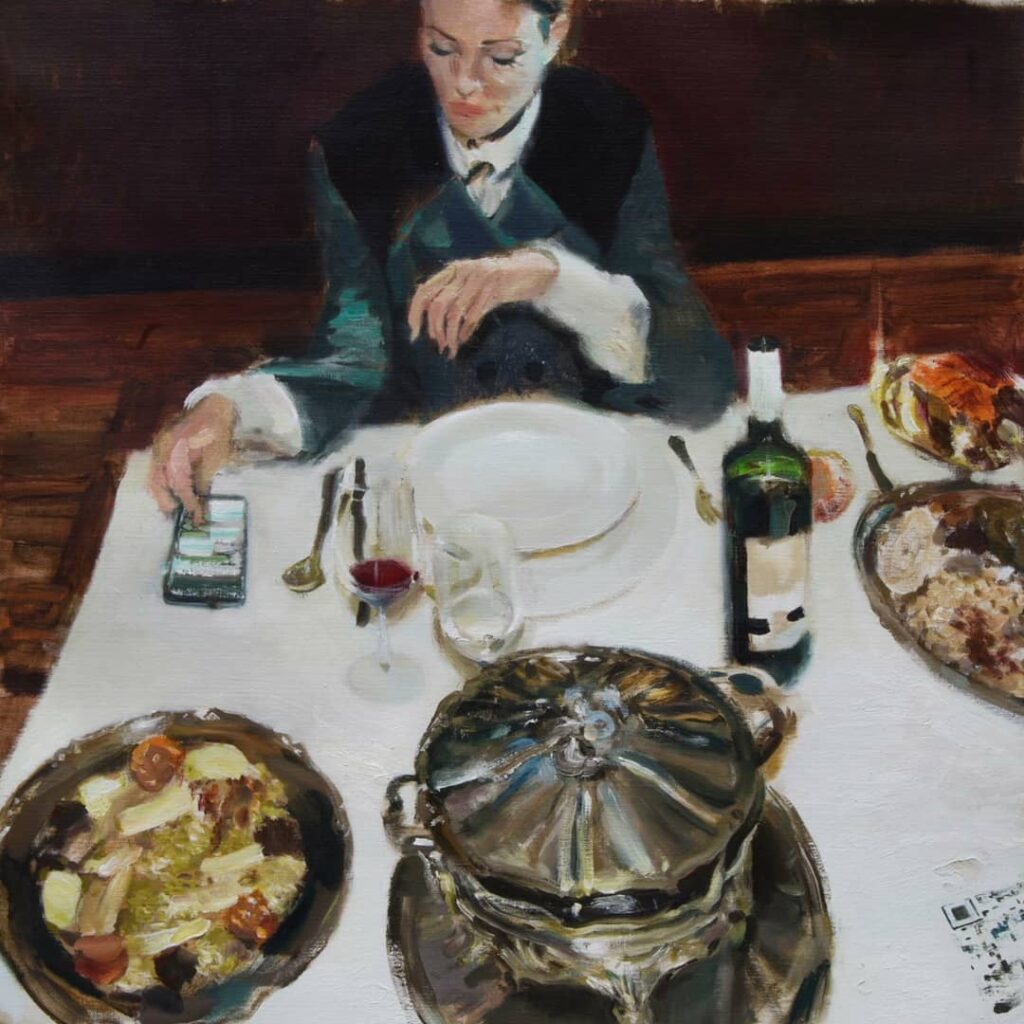 After long months marked by the pandemic, the Andalusian group Califato ¾ decided to take advantage of the de-escalation by embarking on a camping and “magic” retreat to a home-studio in Ronda (Málaga), where they produced thirteen demos in just four days. Months of work later, La Contraçeña (2021) arrived, an album where, in the words of the authors, folklore and modern music are redefined in an imagined and imaginary Andalusia. As soon as they heard the result, only one person’s name came to mind for the album’s artwork: Rorro Berjano.

Friends of the neighbourhood for years, Califato ¾ gave the artist carte blanche «What I loved about the proposal is that they told me that I could literally do whatever I wanted, they didn’t set any kind of pattern. They trusted my work and gave me total freedom», Rorro explains. The result: an aesthetic inspired by the album, but also by the more underground Seville, «with characters that were around here in the area at the end of the 90s, like “the Indian” on the cover or “the penumbras”. Other characters and icons that appear are a direct transmission of the music itself; some of which are spoken about or images that evoked me when I listened to it», Rorro concludes. 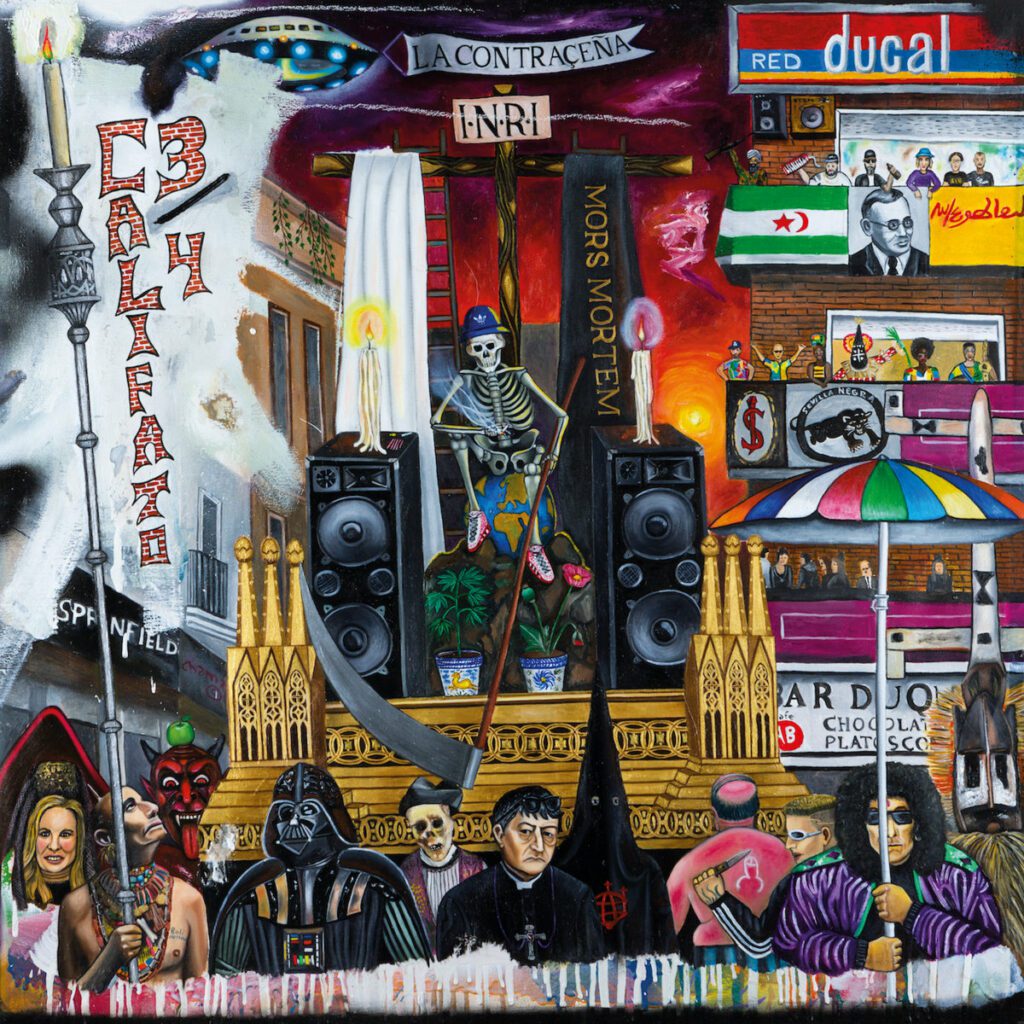 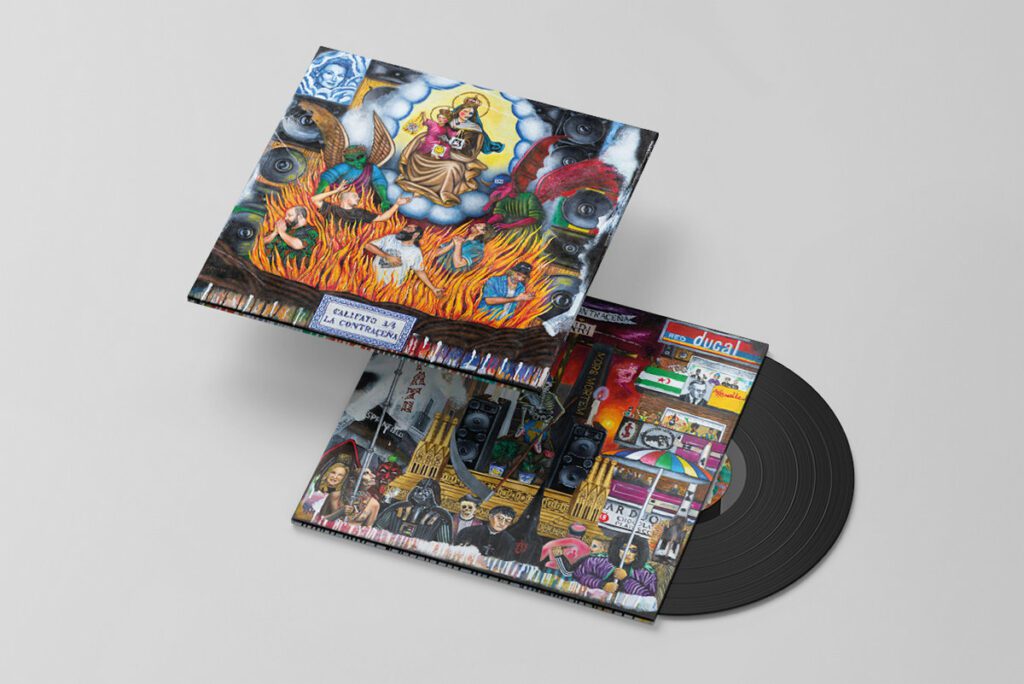 In a tribute to words and musical creation, Love of Lesbian‘s album Poeta Halley (2016) speaks of the beauty of the music profession, of the inconstant ups and downs of almost orbital inspiration, like those of a comet. «Something that is not always present in the sky, but that comes and goes in an established orbit, which is what happens when you are looking for the muses», commented Santi Balmes, the band’s singer, in an interview.

It is in this universe described by Balmes that the artist Sergio Mora found his muse for the oil illustrations on the album cover and the thirteen songs that accompany it. A journey through space whose protagonist and icon is a character in a white spacesuit wearing 3D glasses – the Poet Halley. Vampire geishas, chemical lives, diabolical snakes… all this makes up the poetic universe materialised by the artist: «I was inspired by the science fiction comics of the 50s, also by the packaging of the toys of that era and I tried to give everything a surreal and romantic tinge, which is what Santi’s lyrics evoke», says the artist, Sergio Mora. 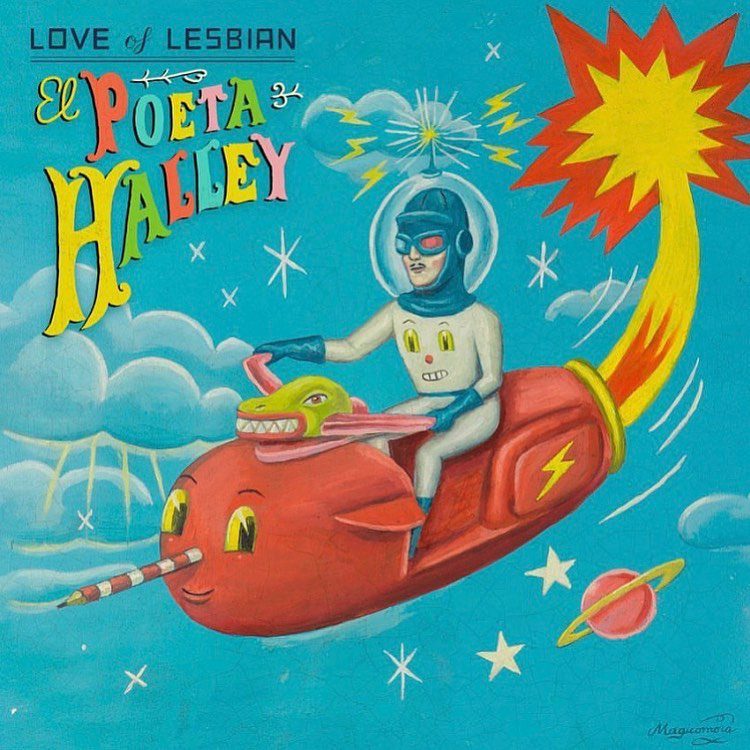 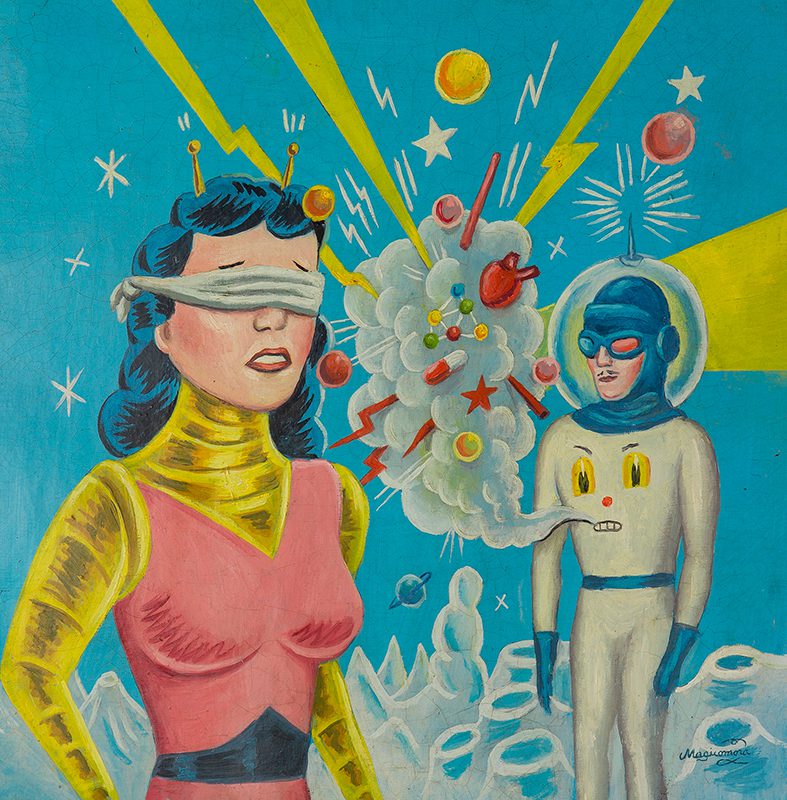 Cuando no me ves 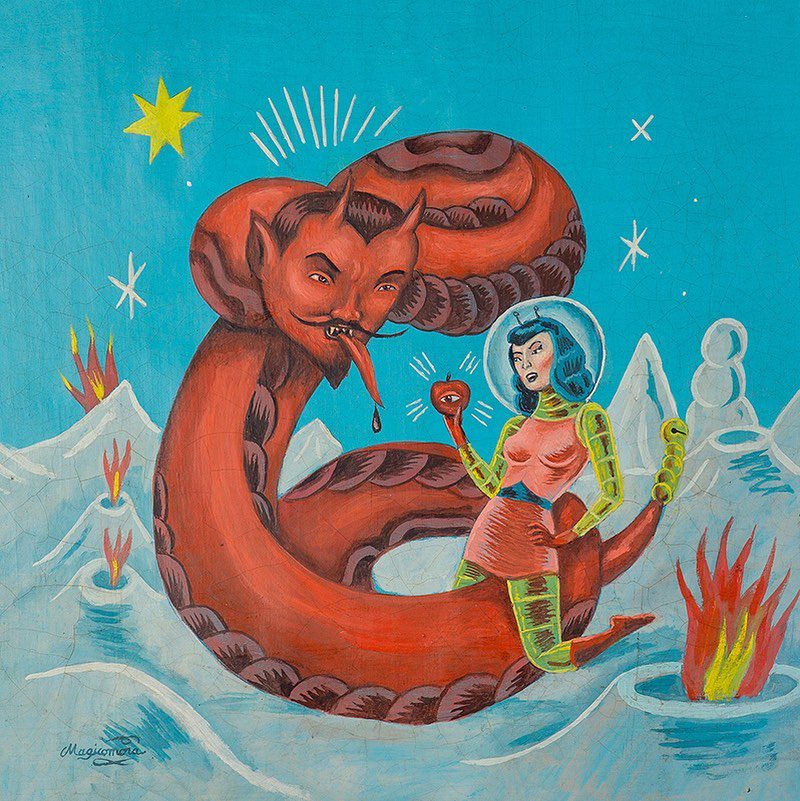 El Mal Querer (2018) by Rosalía is a concept album inspired by Flamenca (anonymous author), a gypsy novel from the 14th century that narrates the story of a woman whose husband goes mad with jealousy, mistreats her, and locks her up. A story that, if we did not know its date, could very well be a modern-day tale; and it is on this reason that the concept of the project is born.

On the audiovisual level, Rosalía entrusted the weight of the album’s creativity to her friend and digital artist Filip Custic, whom she had met years ago through social media.

In the summer of 2017, the artist received the draft of El Mal Querer and saw the materialisation of this universe very clearly. Each song on the album is composed by two names: the name of the song itself and the name of the chapter it represents in the story (Bagdag – Cap.7: Liturgia). Custic designed the conceptualisation of each song’s narrative in a series of preliminary sketches. «I was designing the images for a few months, then taking the photographs, which we did all eleven of them in one day» says Custic in an interview. «Everything is a chroma set, a green background. The magic comes later with Photoshop» he continues. Like puzzles of digital layers, he mixes surrealism and a dreamlike vocabulary with photographic work on the body and objects. All this results in works such as the cover of El Mal Querer, where Rosalía emerges naked as a deity, as the woman protagonist who has ended up becoming stronger and overcoming the misfortunes narrated in the story. 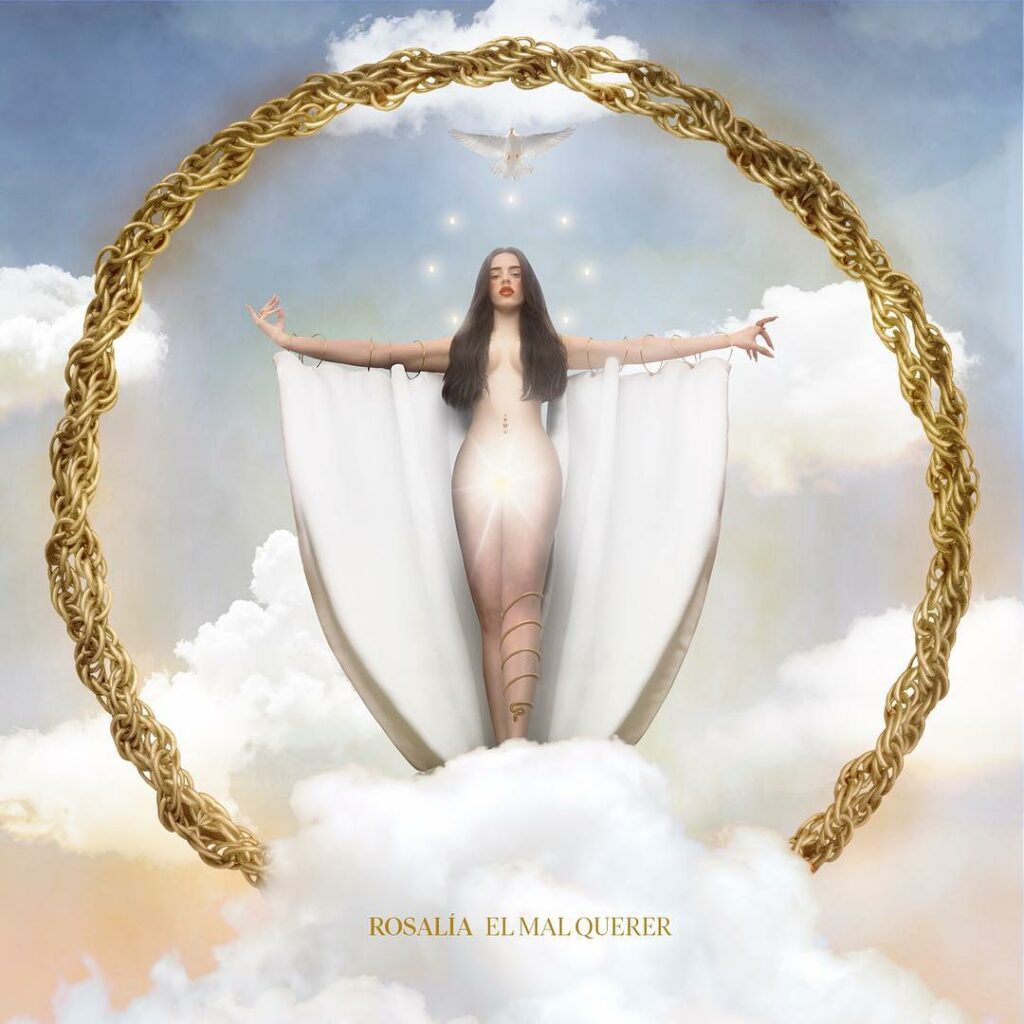 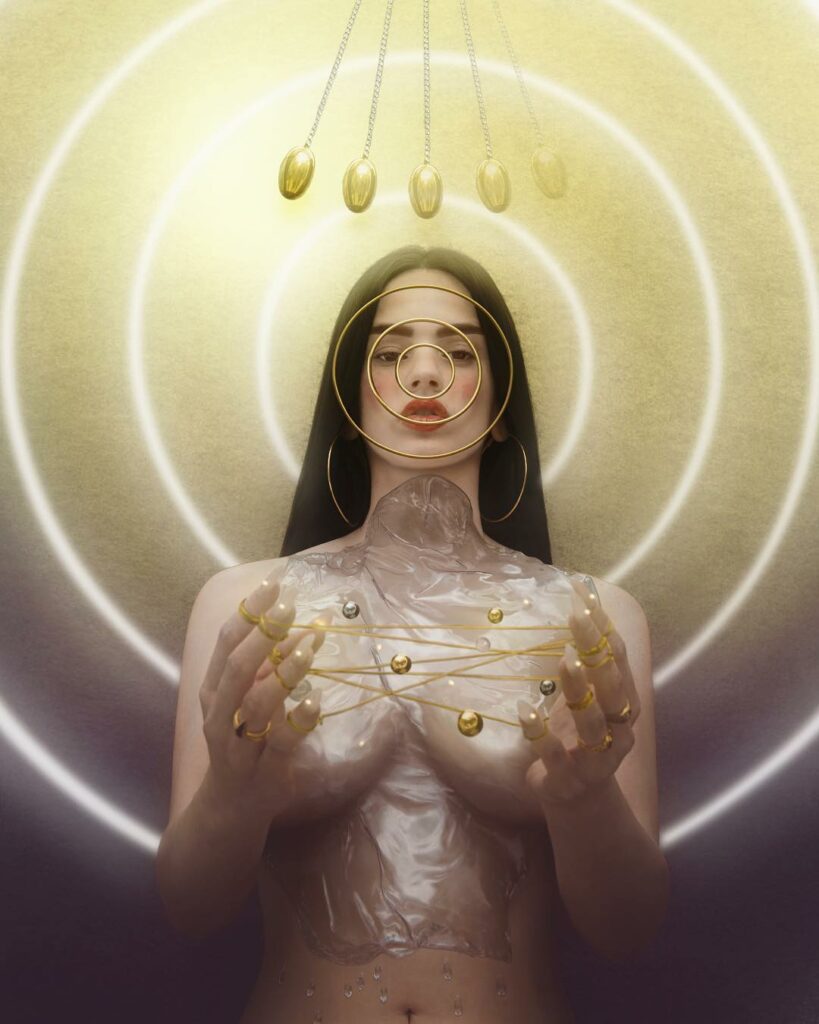 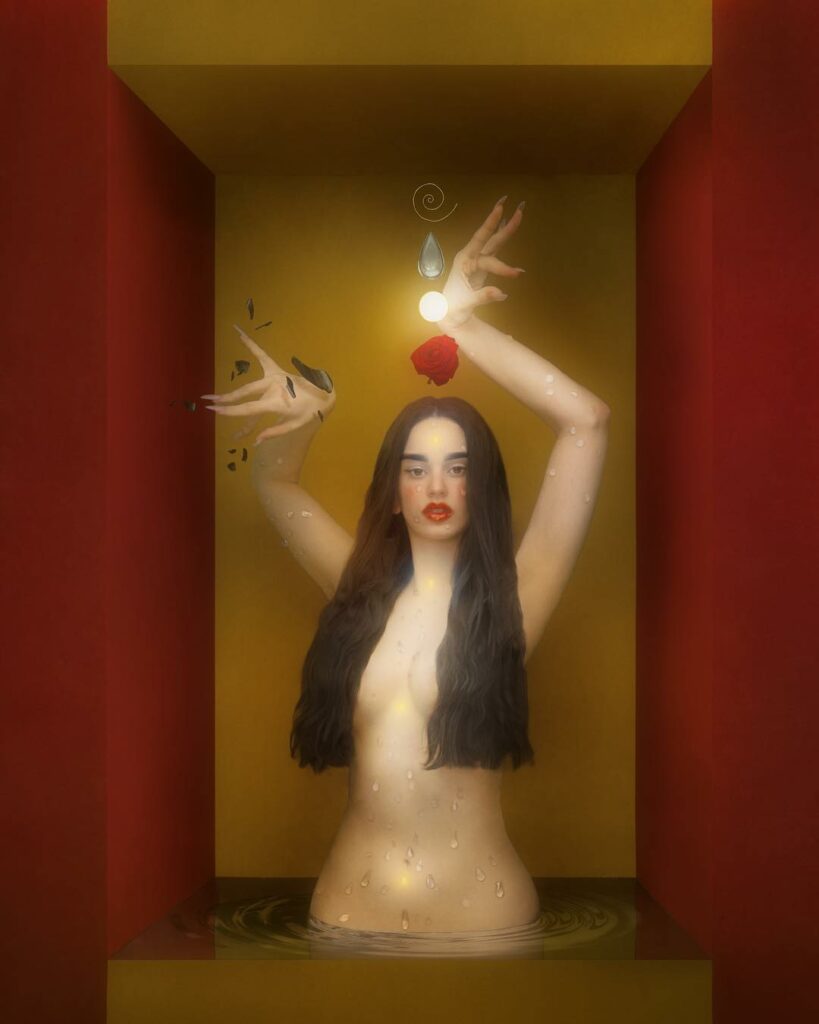 Blink-182 is the synonym of pop-punk that started in the skate scene of the late 90’s on the American West Coast. Who doesn’t remember their iconic music video for All The Small Things that was on repeat on MTV? In July 2016 the American band presented their album California featuring a cover image, with similar tints to the iconic artwork of Roy Lichtenstein’s In The Car, created by the British artist D*Face.

This transatlantic collaboration linking the west coast of the United States with England grew out of the friendship between the London artist and drummer Travis Barker. They met years ago when the musician walked into one of D*Face’s galleries and acquired several of his works. Although the artist has never been a massive fan of the band, he didn’t hesitate to accept Travis’ proposal and create the artwork for the album. The band trusted D*Face’s work and gave him a wide creative scope. The only brief he received: a representation of California, but with a subversive side, showing the city’s chiaroscuro, where there is always something beneath the surface.

He found this epitome in an illustration he had left half-finished «I looked at it and thought that California, for me, is about driving, the birth of the hot rod and that whole lifestyle, so it made sense if it had a car in it. That was the first checkpoint where I realised it worked» says the artist in an interview. He sent the idea to Matt Skiba (singer and guitarist) and Travis Barker who said «That’s the idea. That’s the shit!». 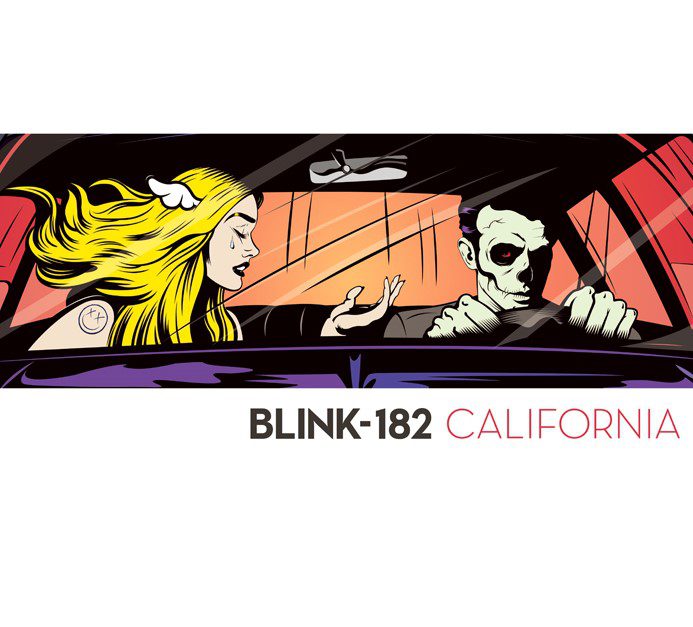 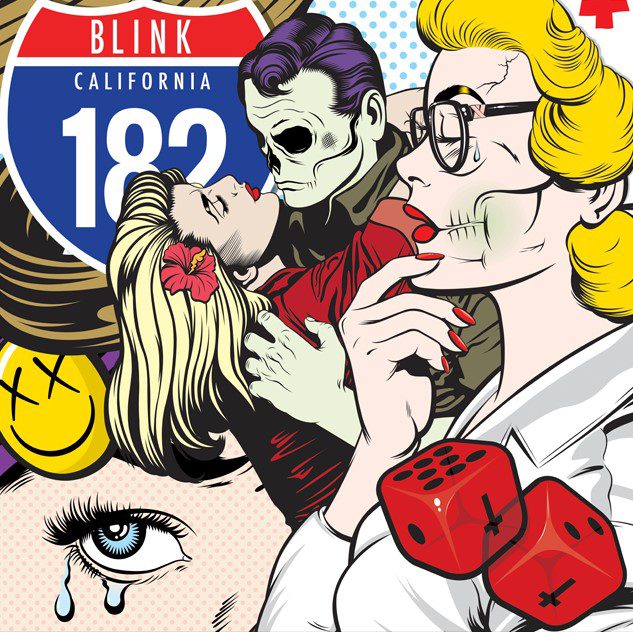 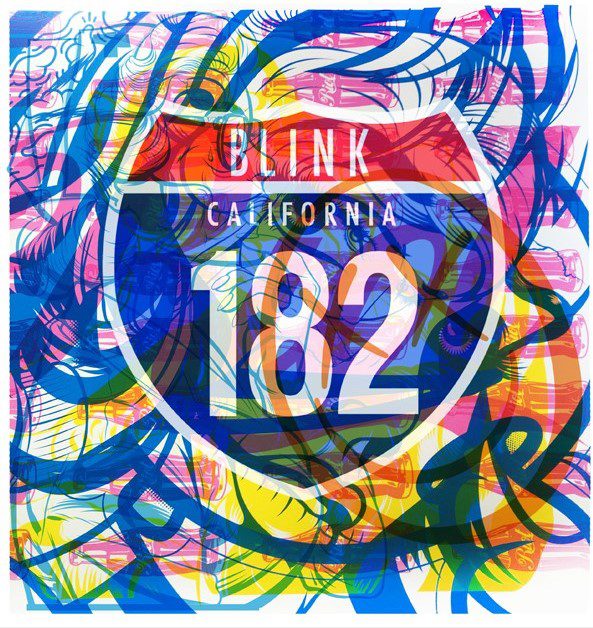 Kanye West is one of the most influential artists in the music world and in his albums, he does not only collaborate with musicians from all musical scenes, but his discography is full of great works by artists ranging from Takashi Murakami to Kaws and George Condo.

Kids See Ghosts (2018) is the eponymous debut studio album from Kids See Ghost – a collaboration between rappers Kanye West and Kid Cudi. In a quest to redefine what mental illness is in the eyes of those who dismiss its existence, the duo captures the lessons they have learned in their respective struggles with bipolar and depression. Drawing on the spiritual realm, they introduce us to their world of ghosts, demons, and fire as they continue their pursuit of peace and enlightenment.

During the production of the album, West and Cudi arranged a meeting with Murakami where, without any prior formalities, the duo began to play some of the songs they were working on and proposed a collaboration to the artist. Following the creation of several preliminary sketches by Kanye, Murakami and his team, the artist ceased to hear from the duo. Thinking that the group would no longer count on him for the development of the visual, he was surprised when one of his watercolour sketches was published as the album cover. A drawing that, far from his emblematic superflat style, illustrates a traditional Japanese landscape in a psychedelic scene. An interpretation that, for the rappers, encapsulated the essence of the album. A vessel where those suffering from mental illness can find solace for their demons and find hope in the story of two kids (Kanye and Cudi) who broke free and became ghosts. 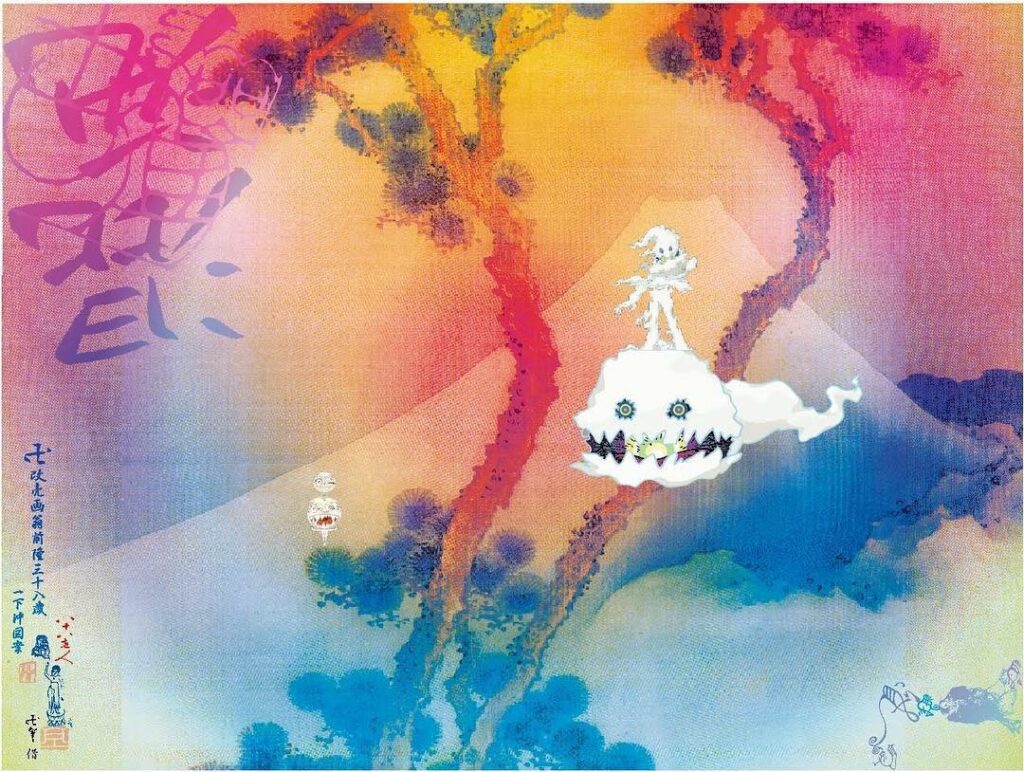