Behind The Scenes: Urvanity 2021 Acquisition and Residency Awards 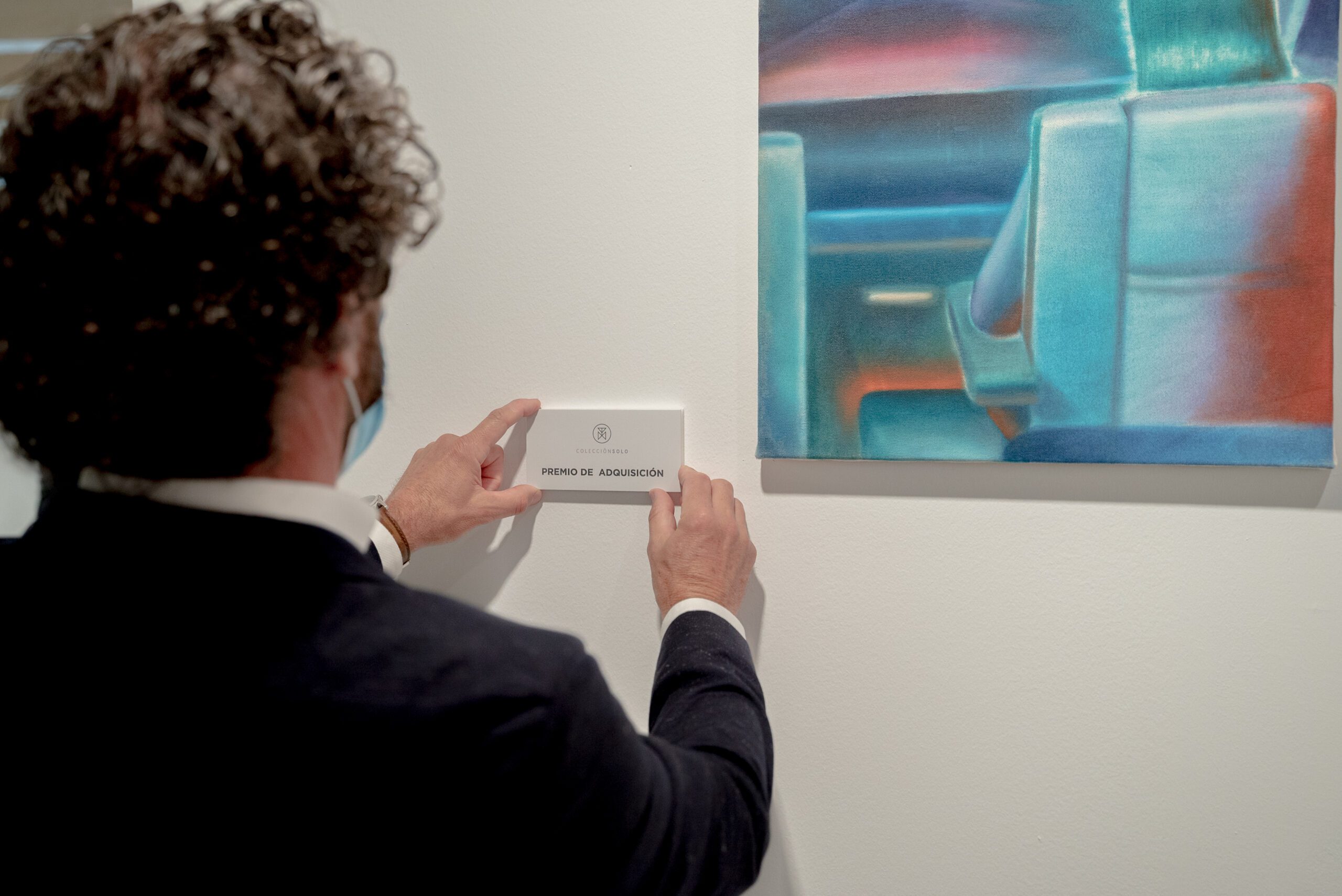 For the first time in Urvanity’s history, our fair featured the Urvanity 2021 Acquisition and Residency Awards. In a pursuit to strengthen support for New Contemporary Art, we teamed up with some of the best international art Collections and Foundations, who gave the awards among the participating artists.

We wanted to take this opportunity to catch up with the award winners. We invite you to discover the meaning behind the winning works and the feelings of the artists!

With the aim of supporting creation and promoting the diversity of current artistic research fields, the Montresso* Art Foundation in Marrakech gave out two awards – an acquisition and a residency award – to Mario Antón and Elena Rato respectively.

Family is always a source of inspiration for artists, and in this case for Mario Antón his grandmother’s collection of religious triptychs has been a fundamental part of his creative process. In a procedure he calls “reverse restoration”, he unites past and future in a single work; Antón removes the original painting, re-prepares the wood of the triptych, and paints the new motif with oil on the boards. He thus restores the purpose of the triptychs, respecting and continuing the stories and symbolism that were part of them.  «I always try to keep the essence and the message of the original work while incorporating elements of technology and science, as they are nowadays active parts of the collective consciousness,» says Antón.

Among the artistic proposals presented by Mario Antón at the fair with Lariot Collective, Alegoría del Hombre was the one that captivated the Foundation. An oil triptych inspired by the work of the same title that can be found at the Tate Britain in London. A depiction of virtue in the face of the attacks of the 7 deadly sins, it is now part of the Montresso* Art Foundation’s permanent collection.  «It’s always exciting to have private collectors interested in your work, but I’m proud to have my work supported by a foundation like the Montresso* Art Foundation,» Mario concludes. 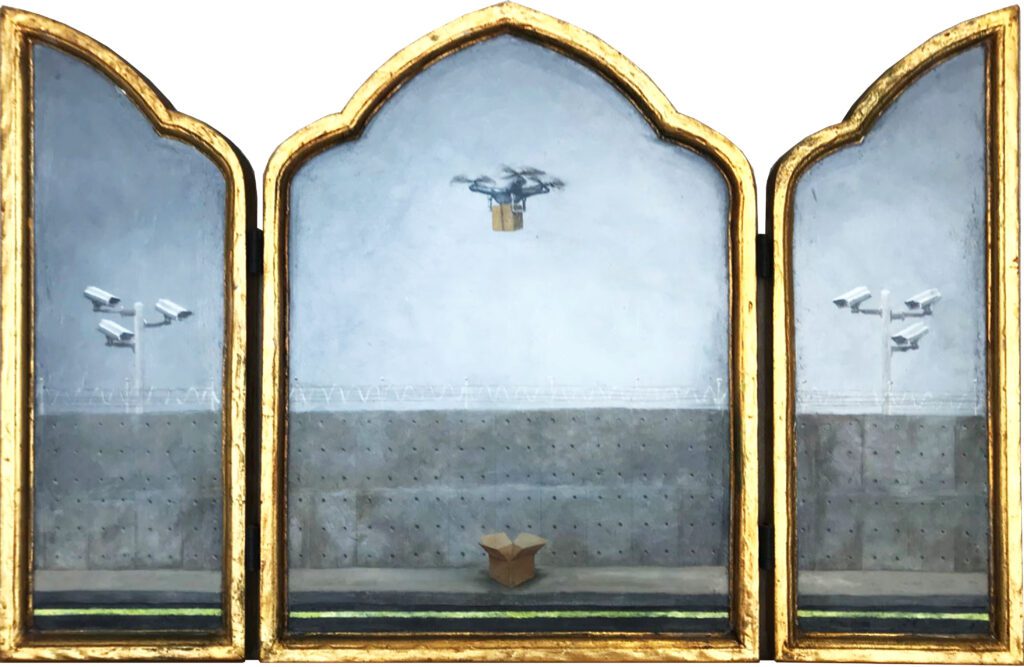 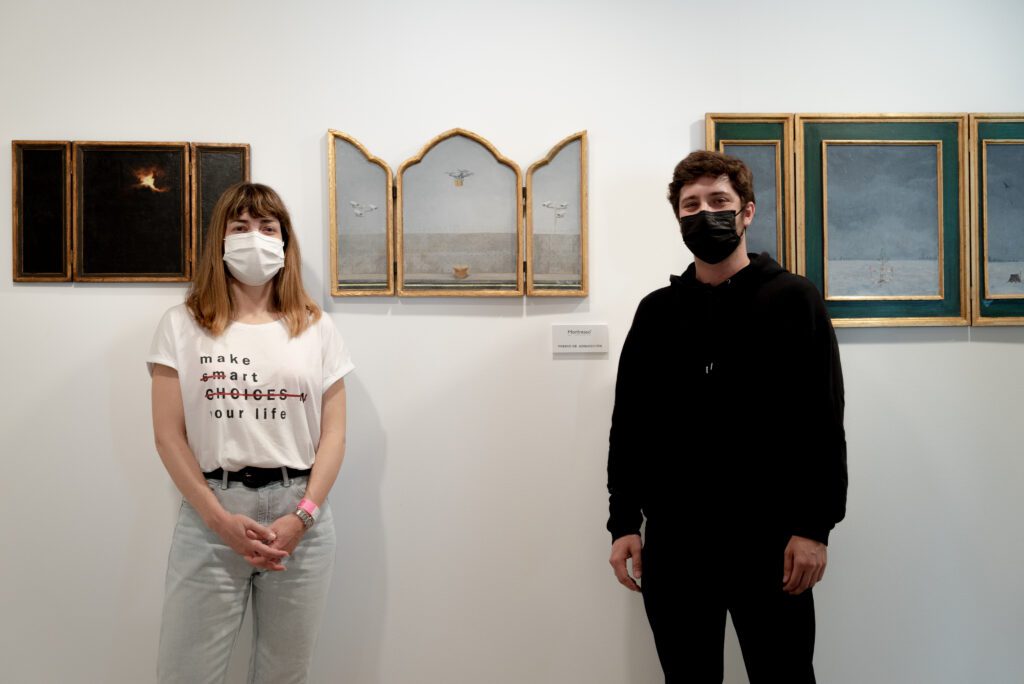 Elena Rato‘s powerful colour trilogy will come to the Jardin Rouge residency at the Montresso* Art Foundation; a creative laboratory located in Marrakech where Rato will benefit from a period of 1 to 2 months of research and creation. Presented at Urvanity 2021 by Furiosa Gallery, her work stands out for its powerful use of blacks, yellows, and pinks. She plays with the limits of the canvas, giving her works the character of a pictorial installation through her black “tangles”. Since her formative years, the artist has been investigating the range of yellows and the clash of chromatic fields between yellow/black. «And then the need for pink appeared», clarifies the artist, a colour that despite being associated with concepts such as the ethereal, the sweet, love, innocence and the feminine, Rato uses it «as an appropriation of colour in an ironic tone that is returned strengthened, stripped of its “weak” aura».

With this artistic discourse she dazzled the Foundation and, although the dates of the residency are still being agreed, the artist is already outlining a project based on dialogue with the environment, both physical and virtual, to be developed in Jardin Rouge. «Creating in a new space and in a totally different environment from the usual one disrupts the acquired inertias, and this is already very interesting as a starting point, my experience is that when changing location, new and unexpected approaches emerge that enrich the creative processes», says Elena Rato. 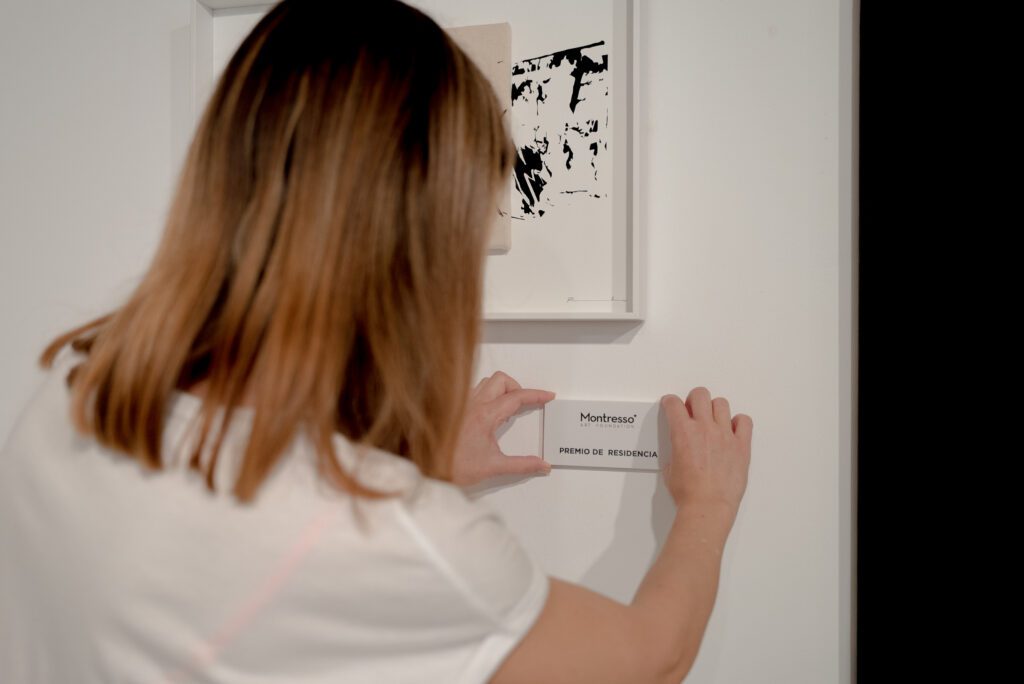 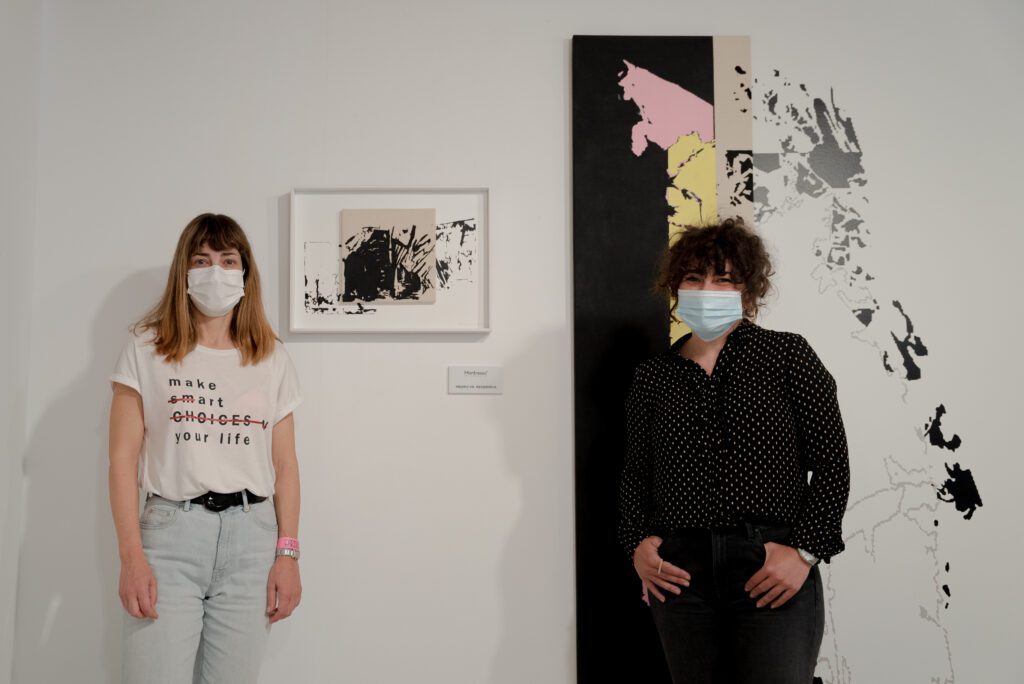 The Nadine Foundation, located in Madrid, awarded the Residency Award to the Valencian artist Mario Mankey, represented by Swinton Gallery in Urvanity 2021. During the months of September, October and November 2021, the foundation will support the creation and exhibition of a new production of Mankey’s work, which will generate reflection and dialogue around a social or environmental issue.

Mario Mankey submitted a fascinating project to the Nadine Foundation, based on the connection between Neoliberalism and its small-scale relationship to the human condition. “I propose a large sculpture that hyperbolically summarises the characteristics of the concept on display,” he says.

A project that the artist is looking forward to getting underway, where the Foundation will provide him with good conditions for research and production, in line with his career and philosophy of life. But the artist emphasises an essential aspect that he has found in the Nadine Foundation: independence in creation. «I think the latter is very necessary to compensate for the great boom in empty, facile, mass-seducing urban art; that it should not be forgotten that artistic interventions in urban spaces were born as a necessary expression of protest», explains Mankey. And the fact is that, despite not being previously familiar with the work carried out by the Foundation, for the artist it has been fascinating to discover that «institutions like Nadine support young talent without reticence». 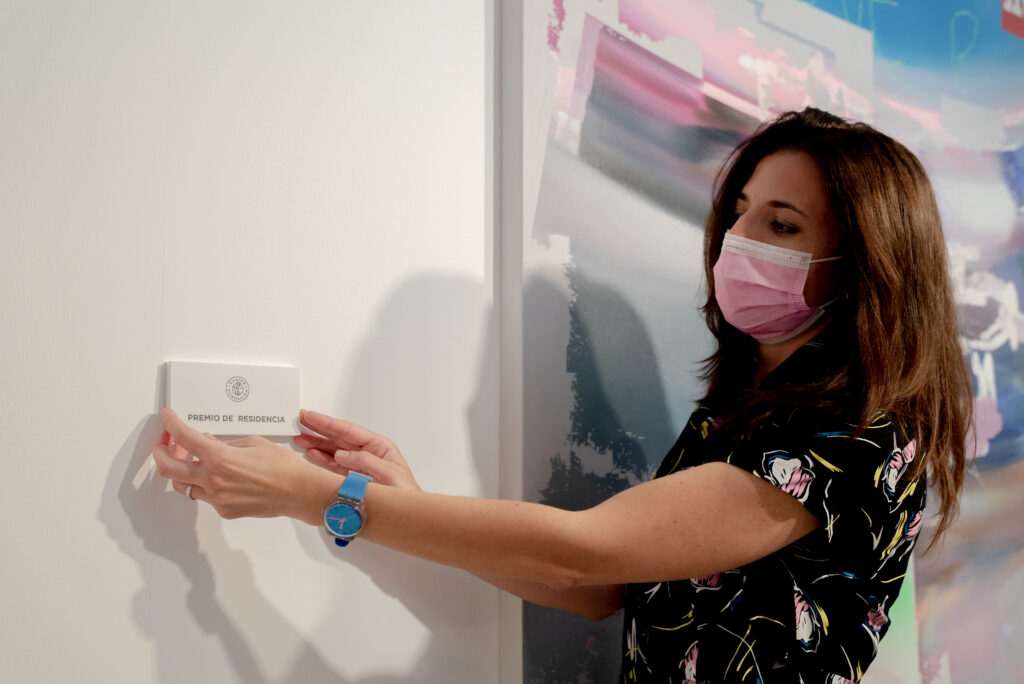 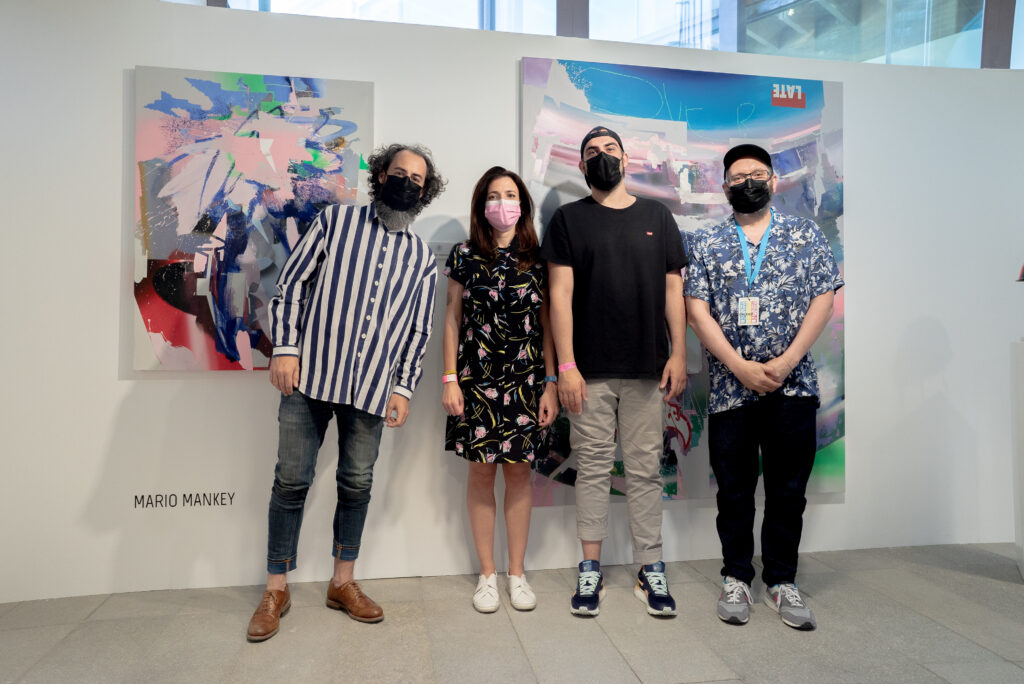 The MER Collection, based in Segovia, is the result of the dedication, perseverance and collecting passion of the married couple Elena Rueda and Marcos Martín Blanco, and their son Rafael Martín. In a search for new names and trends in art to showcase the best artistic talents of the current New Contemporary Art scene, the MER Collection awarded an Acquisition Award to the artist Imon Boy at Urvanity 2021 for his work Bostezo.

Bostezo was one of the works that the artist from Malaga prepared for La Causa Art Gallery‘s stand at Urvanity 2021. Capturing part of his essence, his interests and tastes, this acrylic on canvas portrays an intimate, everyday scene where Imon Boy experiments with lighting.

It was this modern-day genre representation that caught the attention of the MER Collection and now forms an integral part of its collection; more than 800 works with both national and international names, such as Luis Gordillo, Eric Fischl, Lisa Yuskavage, Norbert Bisky, Marilyn Minter, Hugo Crosthwaite, Bill Viola or Miquel Barceló, among many others.

Thanks to Manuela Medina, director of La Causa Art Gallery, Imon Boy learned about the purpose and activities of the MER Collection. «I think it’s a very nice personal project on their part, and from what I understand they have more ideas for the future. I am grateful to be part of the collection, and that they have noticed my work, being one of many,» he confesses. «We are invited to visit the collection and sooner or later we will pay a visit,» concludes the artist. 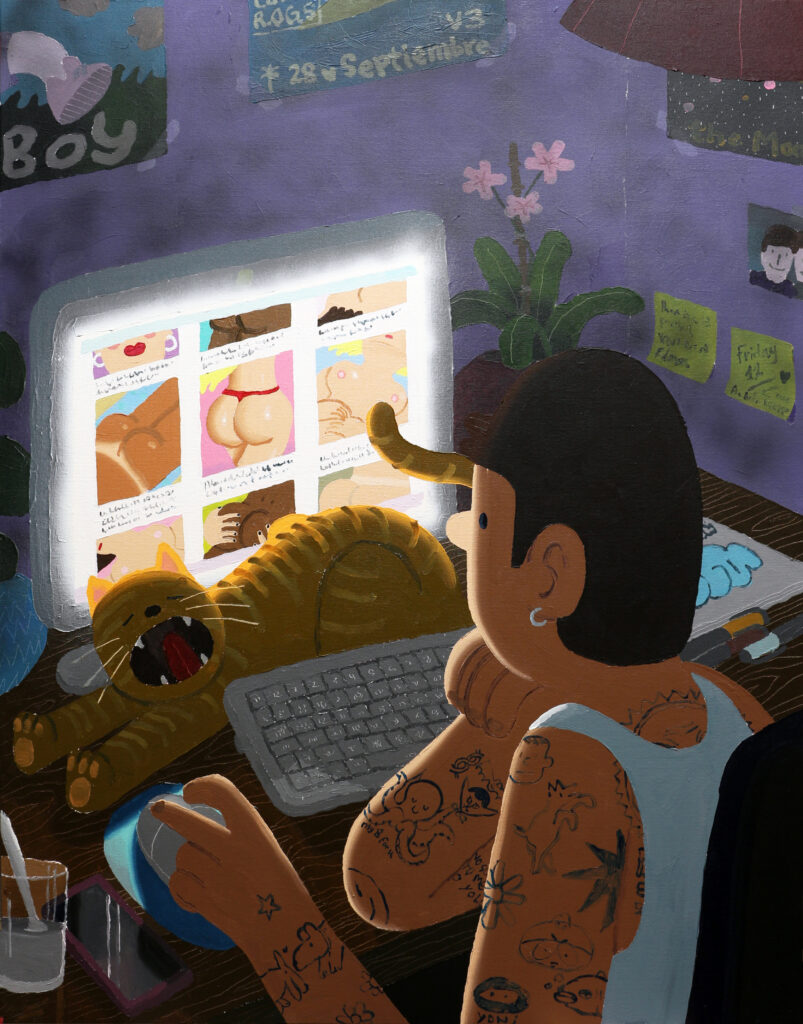 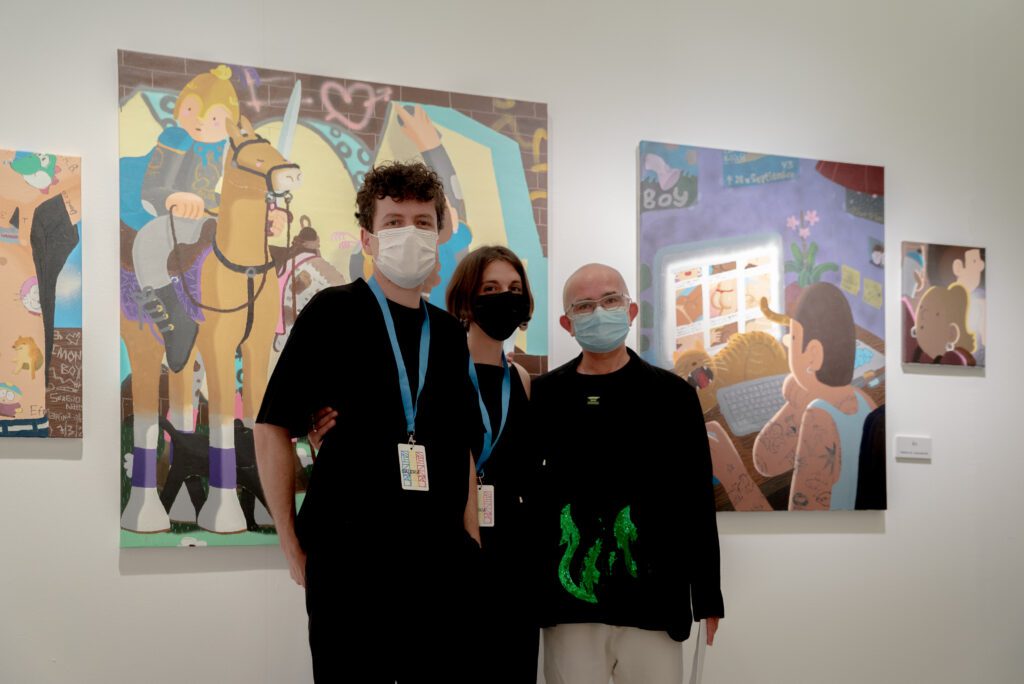 The SOLO Collection is an international art project based in Madrid that finds its mission in the promotion, support, and dissemination of contemporary arts through collecting and patronage the artwork of today. This objective of fostering and showcasing, not only established figures, but also emerging artists was embodied in an Acquisition Award granted to Richard Burton at Urvanity 2021 for his work Feiticeira II.

Inspired by the interior of cars through family memory, Richard Burton filled the Lariot Collective stand with his driving scenes and the textures of seat materials. Oil paintings where the British artist captures in a great work of sensuality, his study of textures and lighting, «the textures of upholstery are a recurring theme in my works; the softness they present relates to our constant desire for comfort» he explains. Painting has become an almost neurotic form of construction for him, driven by unconscious and conflicting desires, «I am interested in the sensations that persist, despite ourselves and our efforts to block them out,» says Burton.

This way of processing lived experiences where Burton assembles forms, spaces, and relationships in an obsessive and fetishised manner attracted the attention of the SOLO Collection, who acquired his work Feiticeira II making it part of their permanent collection. «I hope my work reflects our struggle with the hidden demands of the unconscious, full of emotion and fear» concludes Richard Burton. 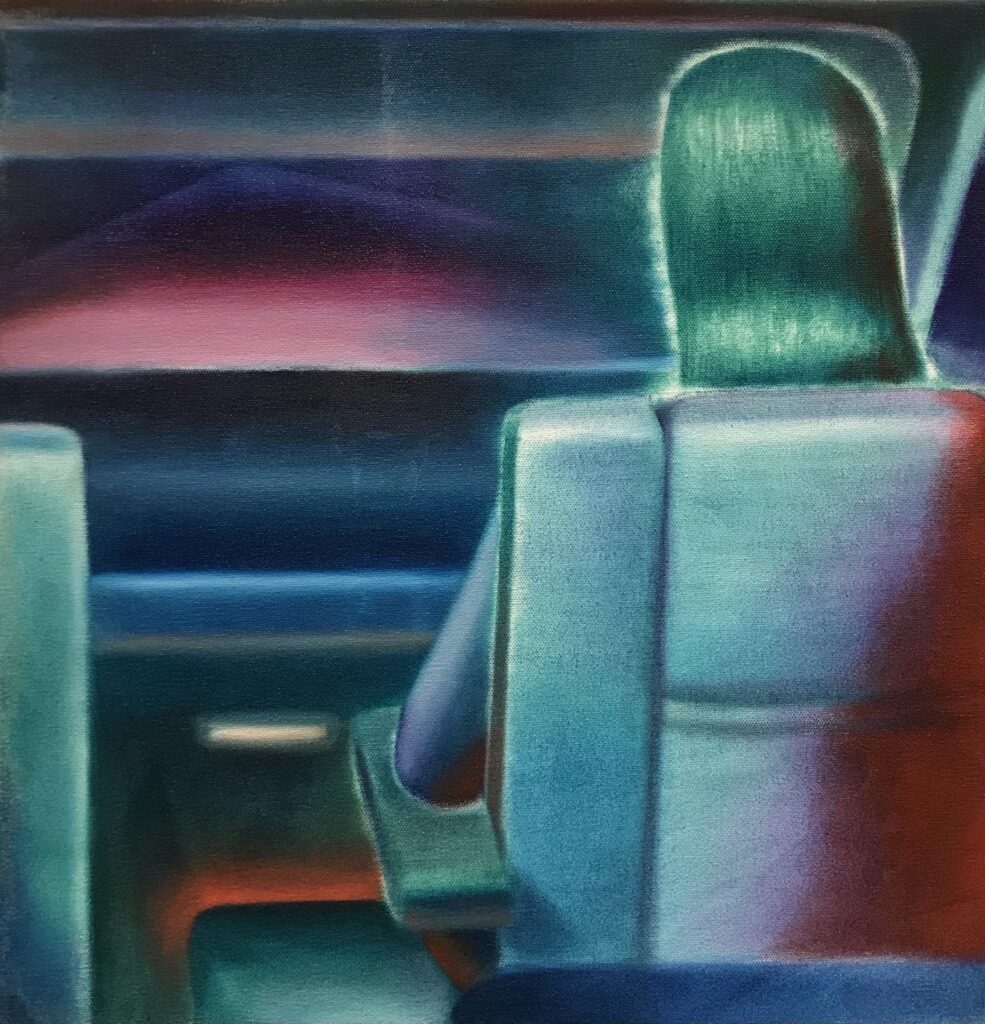 Casa de Indias, a collection born of the collectionist impetus of the married couple César Jiménez and Lola Martínez, was entrusted with awarding the Acquisition Award to Johan Deckmann. With the aim of developing grassroots collecting and promoting contemporary art, Casa de Indias chose the work Valuable, which is now part of its permanent collection on display in El Puerto de Santa María (Cádiz).

At Badr El Jundi‘s stand, Casa de Indias came across Valuable, one of Johan Deckmann‘s earliest works, from the period prior to the development of his signature font. Since the beginning, the Danish artist has captured in his production the art of living an honest and sincere life. «This piece is about the balance between surviving as a person and being accepted by your surroundings. About having healthy boundaries in an unhealthy society,» declares the artist. He simply paints this leitmotif, crucial for navigating through life, in the book.

Johan Deckmann, who discovered the Casa de Indias collection through his gallerist María Gracia de Pedro, acknowledges that he was delighted to receive the award and feels very honoured to be part of a collection that, in his words, is “very inspiring”. 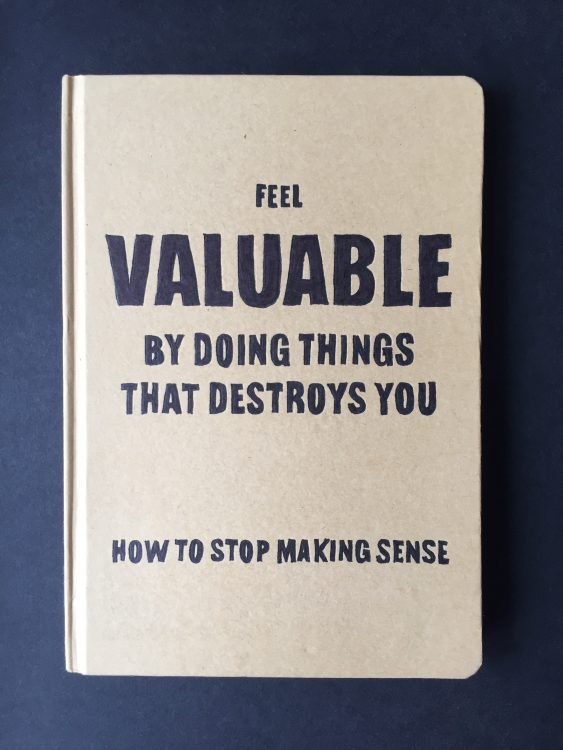 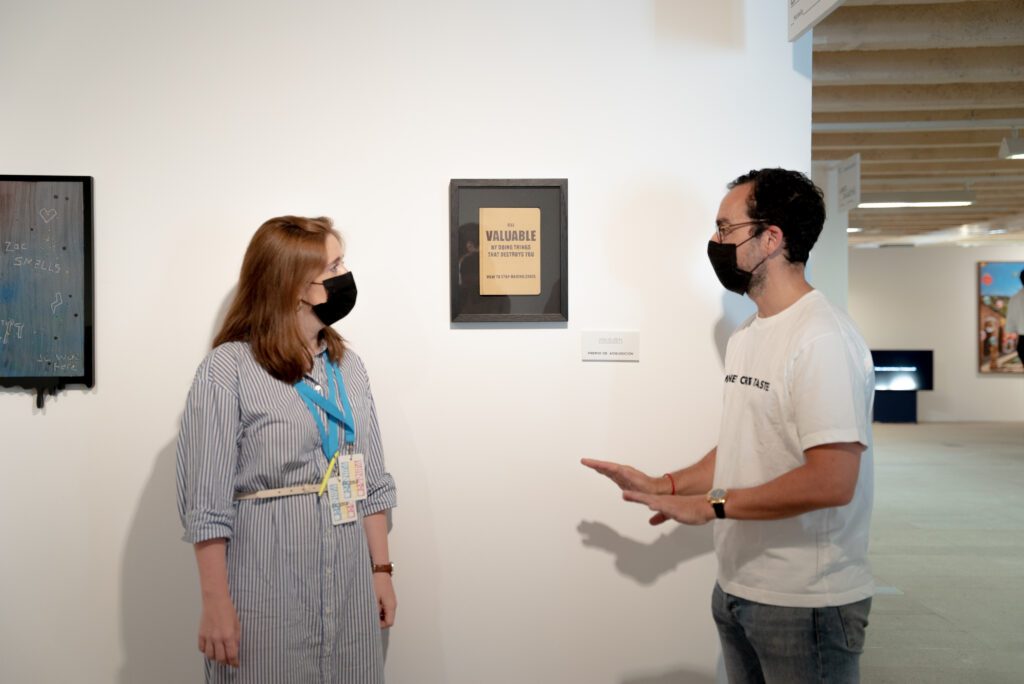