What to read, see and listen to this summer by Zosen Bandido, María Herreros and Rorro Berjano 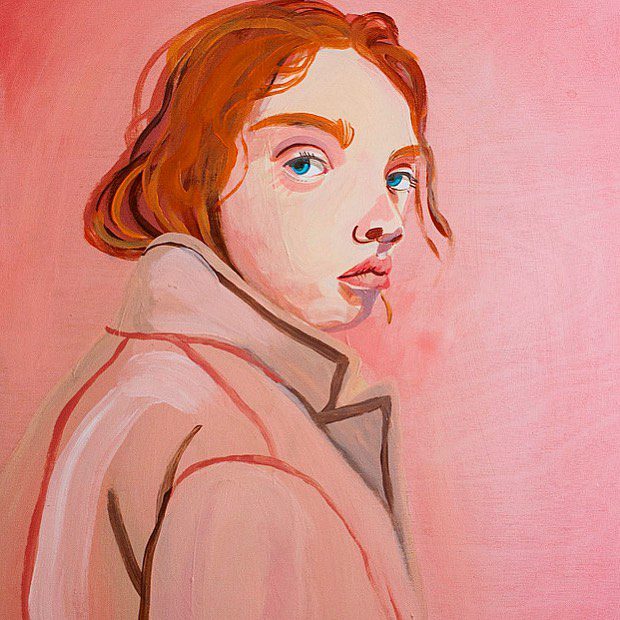 We take off on an intergalactic journey with Spanish artist María Herreros, devouring the pages of books on the understanding of the universe; we get to know the latest and freshest graffiti scene in Paris and delve into Scandinavian post-horror cinema with Argentinean Zosen Bandido; we groove to the rhythm of national jazz-rap and catch up on the new wave of Cuban island musicians with Extremaduran Rorro Berjano; and we finish with a look at some of the best exhibitions in Madrid from this year.

Make a note of the best summer recommendations.

Based in Barcelona, Zosen Bandido (1978) is an artist born in Argentina who has been soaking up everything that surrounds urban culture since he was twelve years old. He grew up skateboarding and surrounded by graffiti artists, a lifestyle that would later evolve into the muralism that identifies his work. Vibrant colours, Latin American folklore, Inca and Aztec cultures, merged with punk, hip-hop, rap and the skate and street culture of the late 80s and early 90s, resulting in a pictorial decalogue of his own. While it is true that murals are an innate element in Zosen, his own mythology of colour crosses borders, reaching disciplines and formats such as illustration, video art or performance. A ludic aesthetic with a social background that has travelled through Europe, the United States, Canada, Argentina, Chile, Brazil and Japan.

Don’t miss the work of one of the leading names in urban art and expand your list of must-sees with his recommendations. 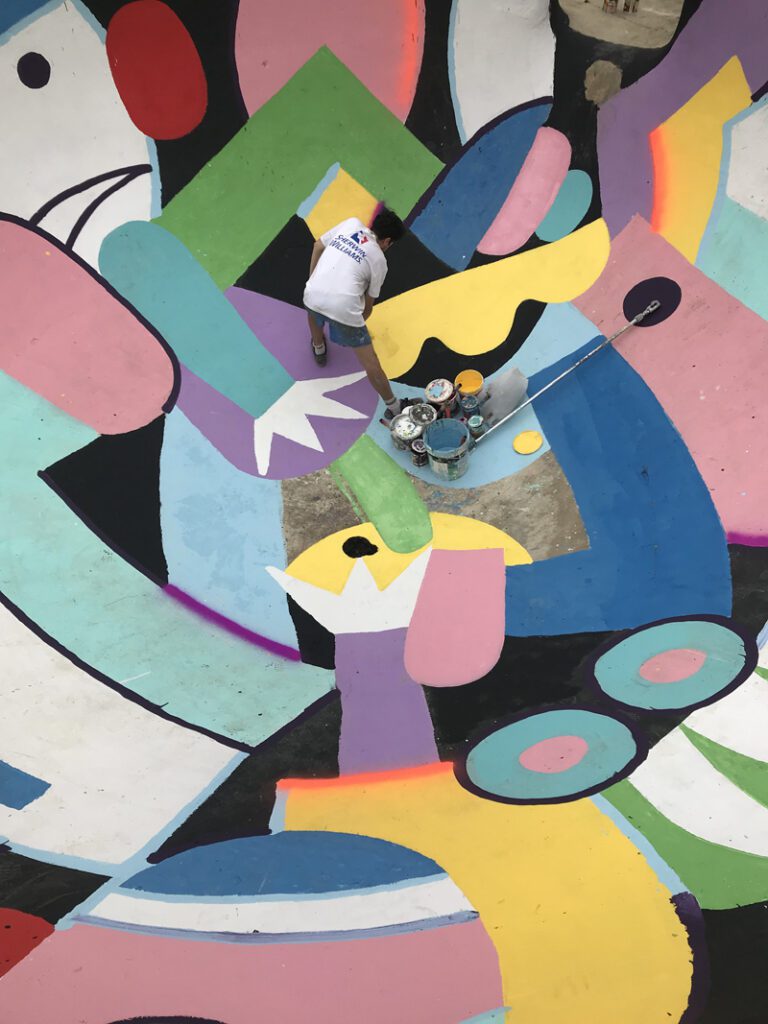 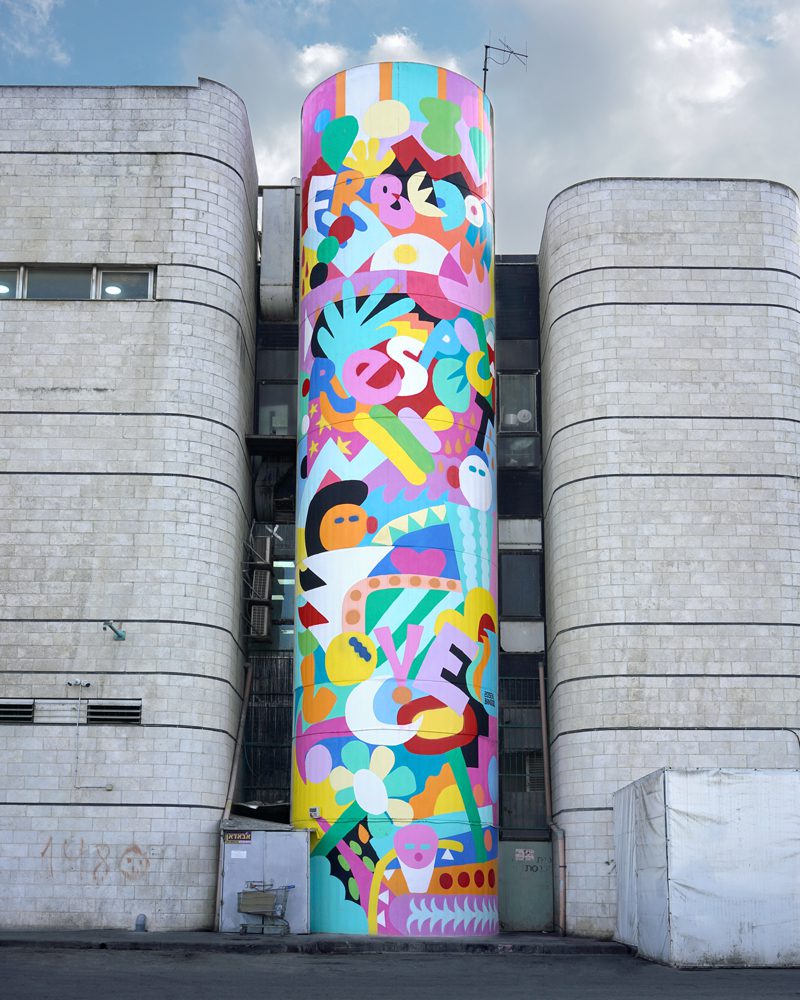 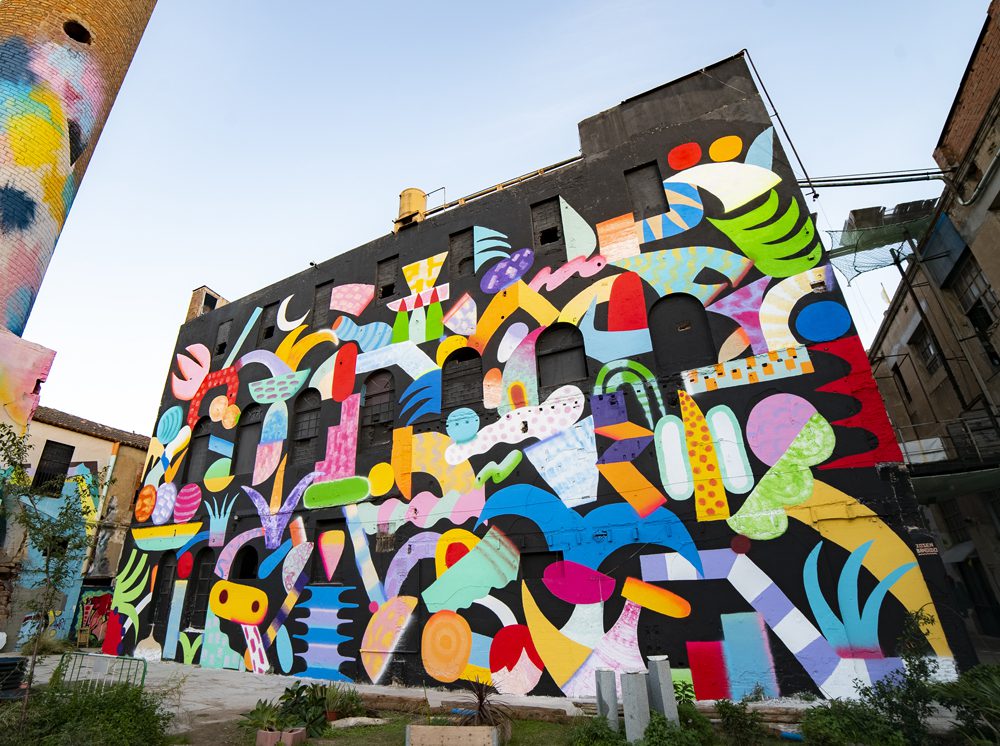 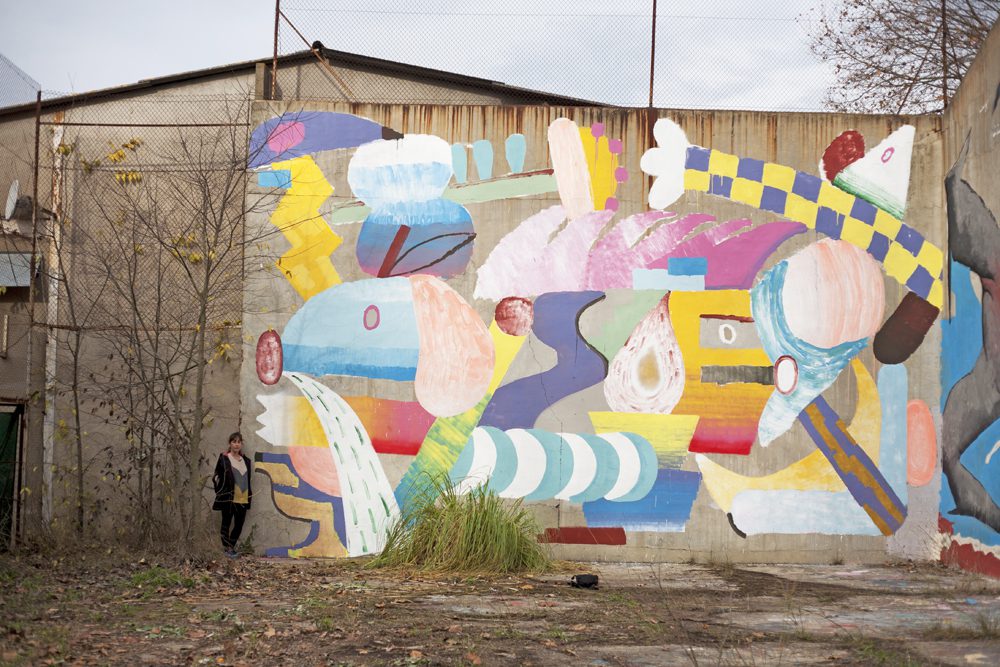 From visual artists or people who paint in the street I find very fresh the work of my friend Mathieu Julien aka Gsulf, which covers from the most avant-garde graffiti to painting on other media, book publishing or ceramics. I think that in general the graffiti scene in Paris always has fresh and groundbreaking proposals, as a few years ago was the PAL group with Saeio, Sonik, Horfe, Tomek, Mosa, etc. or in the 90’s Honet, Popay or Stak that inspired a lot to the Barcelona scene and was one of the influences for the emergence of what here was called “trash style”, what is now called ignorant style or anti style.

As for movies, I don’t watch almost any series, I don’t have time to wait to see the outcome, I watch a lot of old film noir or thrillers now that there is so much material available online. It’s always good to discover old gems but I also watch current cinema, here are some recommendations: Midsommar (Scandinavian post horror) not suitable for all audiences, like Hereditary, the Swedish film Border or a classic that never goes out of fashion: Mulholland Drive by the master David Lynch that this year celebrates 20 years of its release and is a piece of ART in capital letters!

With music I feel the same as with movies, as Adam Horovitz of the Beastie Boys used to say: I don’t listen to much current music because there is too much old material to discover that we didn’t have access to before the internet, you have to know how to choose because there is too much good music still to be discovered. With the death of MF Doom last year, I was rediscovering all his work and the truth is that this mc was brilliant and had very good ideas such as conceiving an album as if it were a sound comic. Recently he also left us Shock G of Digital Underground, an avant-gardist of p-funk rap, apart from mc he played the piano and drew the covers of his works, 100% recommendable.

Although I would also like to highlight Nathy Peluso, who like me, was born in Buenos Aires and emigrated with his family to Spain and I think he has an attitude and energy that I wish all young people rise with that strength and positivity! 100% porteña.

Another interesting musician to highlight is the Canarian mc Bejo who apart from having very personal rhymes, makes his own videos, draws and paints; a self-made artist; check out his latest work Tripi Hapa.

María Herreros (1983) is a Valencian artist who has been working since 2011 for artistic, commercial, and social projects at an international level, specialised in the fields of painting, illustration, comics and muralism. With a career focused on humanism, she explores themes such as gender equality and social justice, always seeking to bring art closer to all social stratums. A very distinctive pictorial language where she plays to destabilize the concept of normative beauty under an intimate filter of human emotions that is expressed from the absurd and often with a grotesque atmosphere. María observes the scene from outside, without moral judgement and putting intuition above rationality. A unique vision that has led her to work for entities such as Taschen, Museo Thyssen, Vogue and Uniqlo among many others; and to the exhibition of her works in cities such as Hong Kong, Los Angeles, Madrid, Seoul, or New York.

Soak up the conceptual duality of her work and discover what lies behind the name María Herreros with her recommendations. Let’s go! 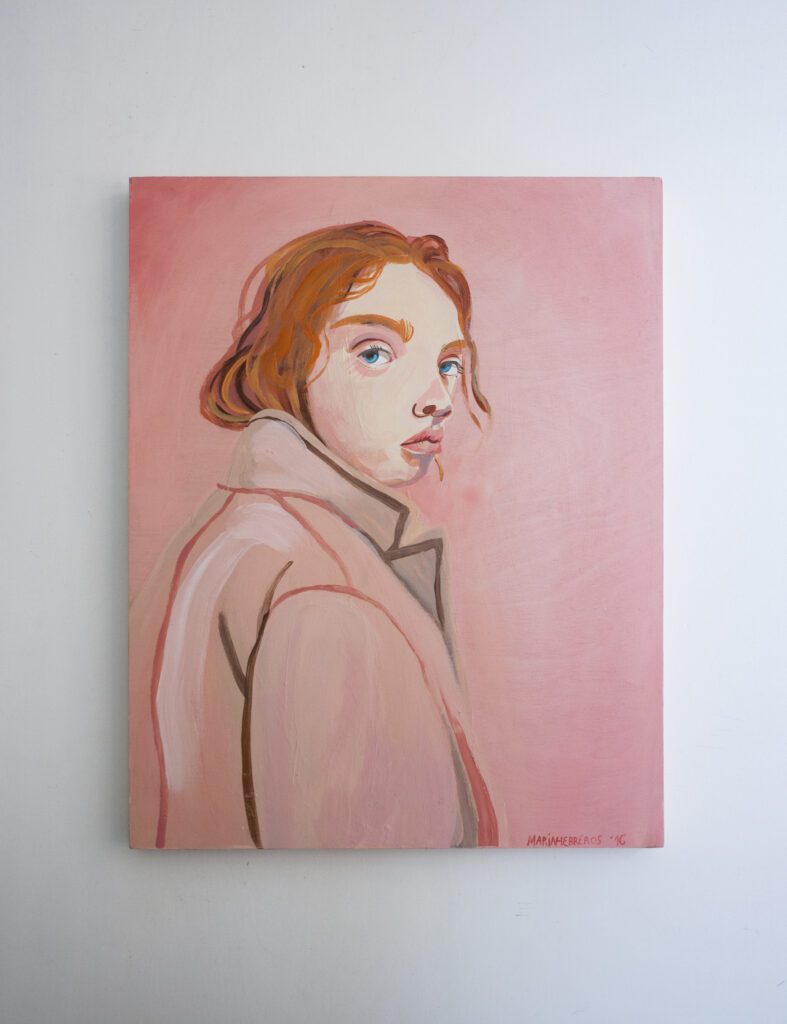 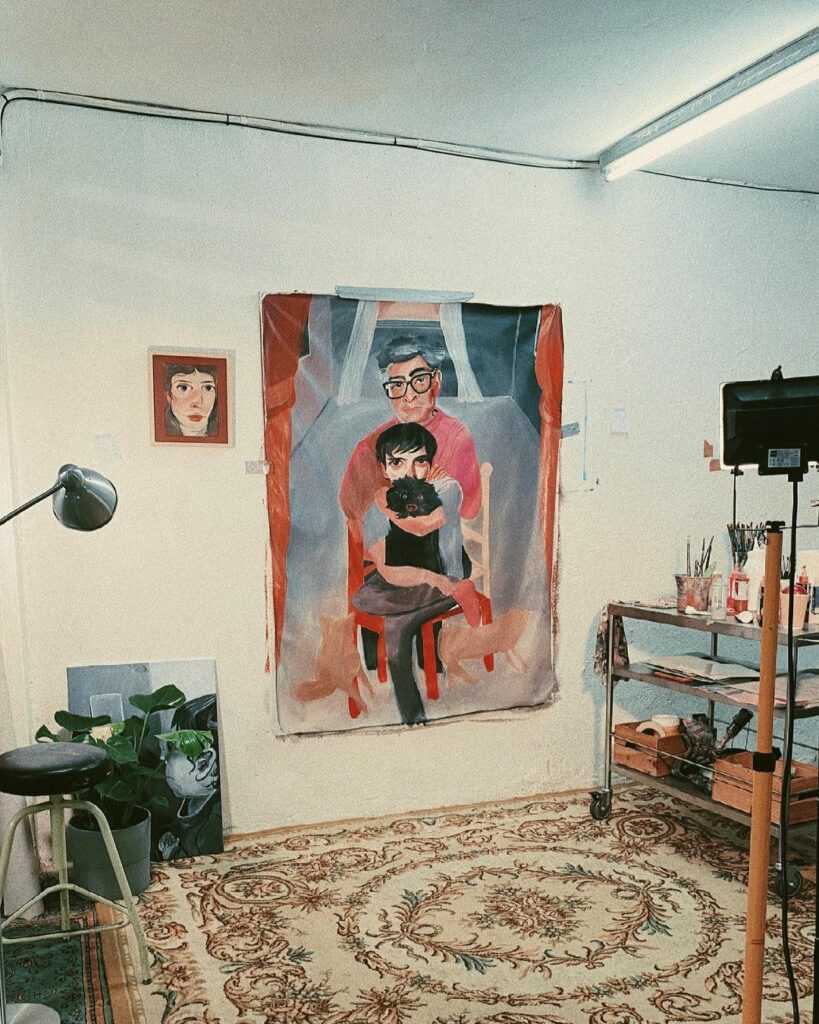 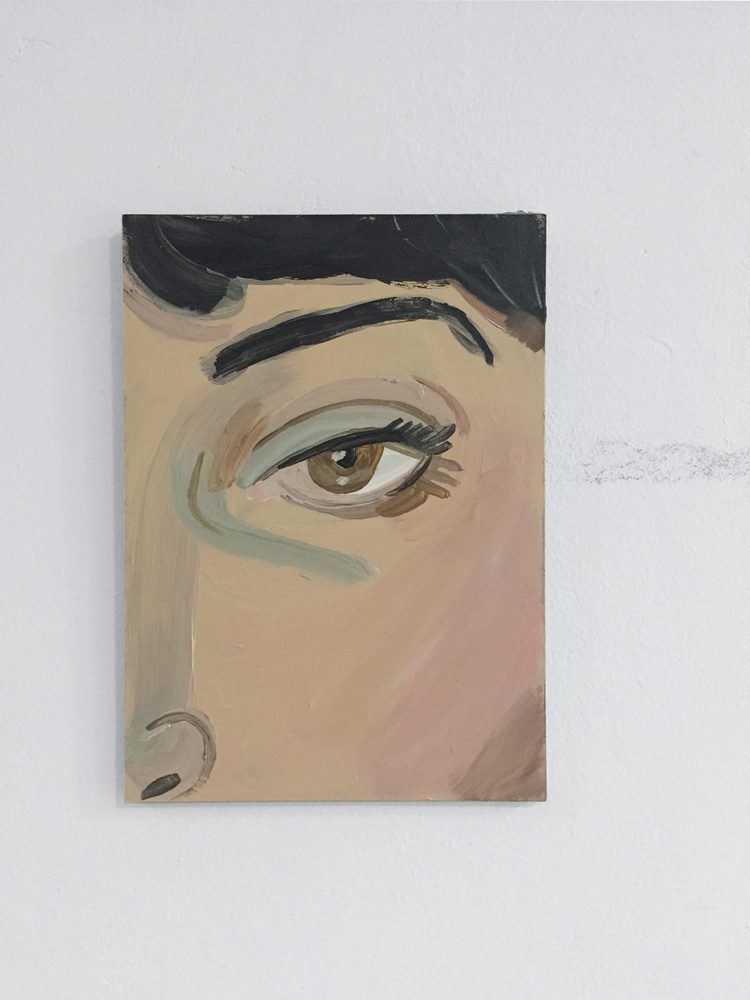 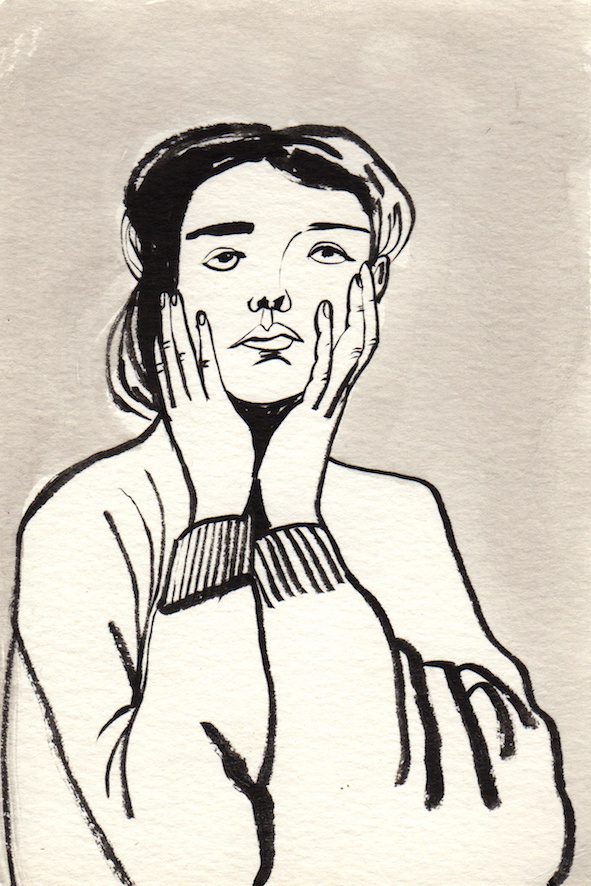 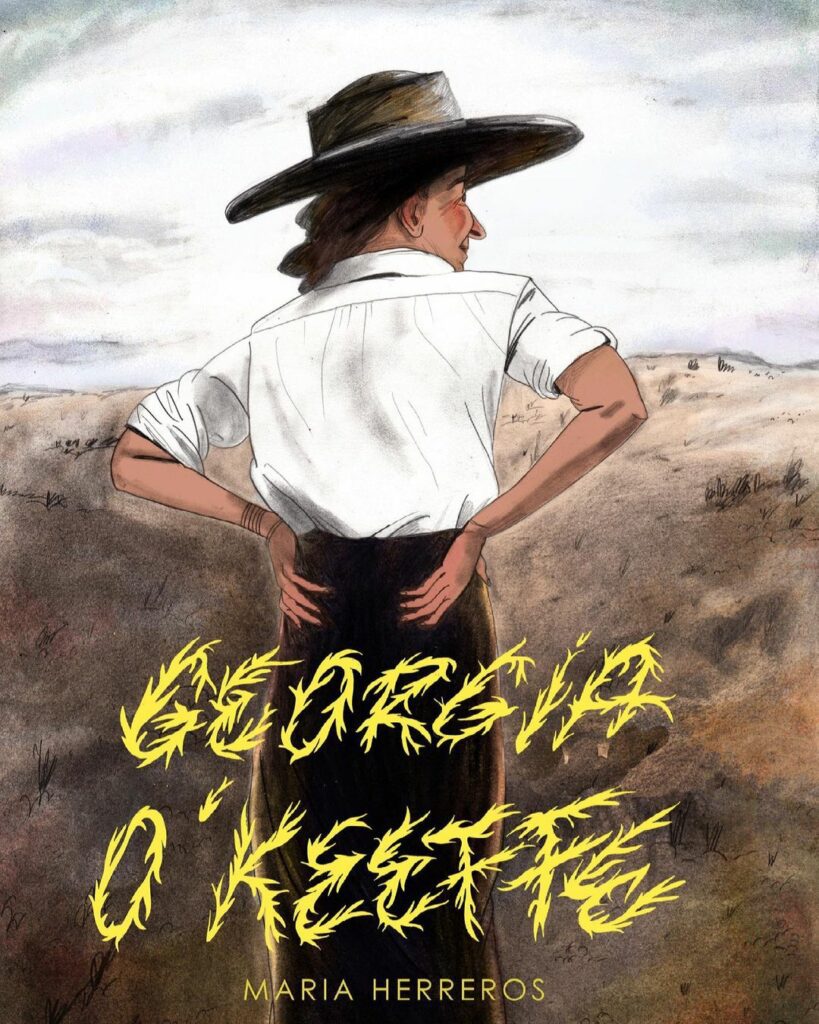 Lately I am reading a lot about astrophysics. A few years ago I started to get more seriously interested in the cosmos, and soon I saw that my thing was not astronomy (observation and data about the cosmos) but physics, understanding about the universe, and how it works… It requires abstract and creative thinking which is more for me. Some of the best books I have read on this subject are Jon Willis’ “All These Worlds Are Yours” and Neil Degrasse’s “Astrophysics for People in a Hurry”. I’m going to start soon with others by Kip Thorne and Stephen Hawkins, but now I want to find something more academic, textbook type and seriously sit down and take notes as I read it. I need to learn the basics.

There is a videoclip by Birdy Nam Nam, Defiant Order, that I love to watch from time to time and I can’t even explain why. I also really like to watch fractal videos. It’s hard to believe but I do it without taking mushrooms 🙂

I really like to do film cycles by director, the best platform for me is Filmin. My favorite movie is Kubrik’s “Space Odyssey”, but my favorite director is Leone. The second is Yasujiro Ozu. He also has a book “The Poetics of the Everyday. Writings on cinema” which is a marvel for any artist who wants to better understand his processes.  I also really like everything by Lynch, who also talks about quantum physics and antimatter in his films, or at least that’s what I want to believe.

I do an active search to see more films made by women, and this year I loved “Nomadland” by Chloe Zhao.

This year I have been able to see two brutal exhibitions in Madrid, Botero’s at Centro Centro and Georgia O’Keeffe’s at the Thyssen. On the occasion of this last exhibition I have made my last book and now I am a crazy O’Keeffe and I think it was an advance in transcendental observation, environmentalism and radical personal freedom. Before the Covid when you could travel, the best I have seen is an exhibition of Tsugaru Foujita in Paris and the entire collection of the Collection de l’Art Brut in Lausanne.

From music women with a very husky voice is what I like now. 070 Shake, Young M.A and Little Simz I love. For painting I play a lot of King Crimson.

Rorro Berjano (1979) is an Extremaduran artist whose artistic practice seeks new directions in his language, creating a reinterpretation of folklore, expressing the decadence of today’s society and its everyday nature. A distinctive approach that draws on graffiti, street art, contemporary popular culture, colliding with the initiatory experiences that kept him in contact with Afro-Cuban ancestral culture, his approach to religious syncretism and Caribbean idiosyncrasy. Rorro thereby creates a juxtaposition of ideas and pictorial registers that are manifested in paintings and sculptures exhibited at European level. 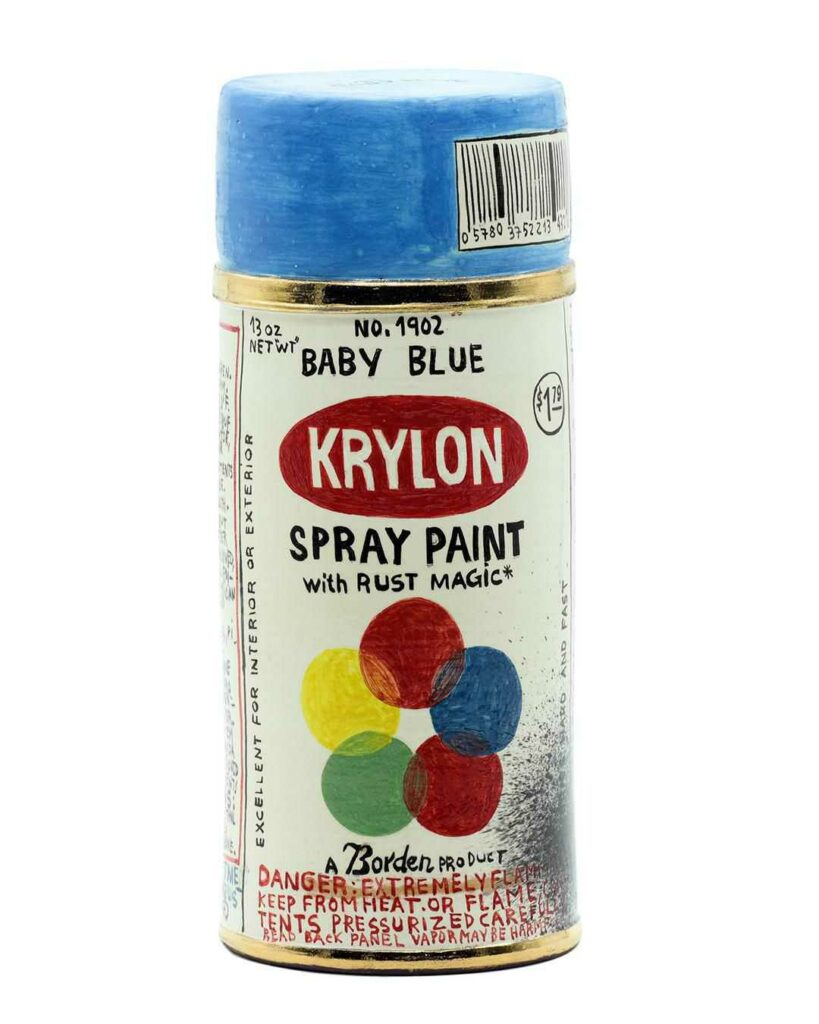 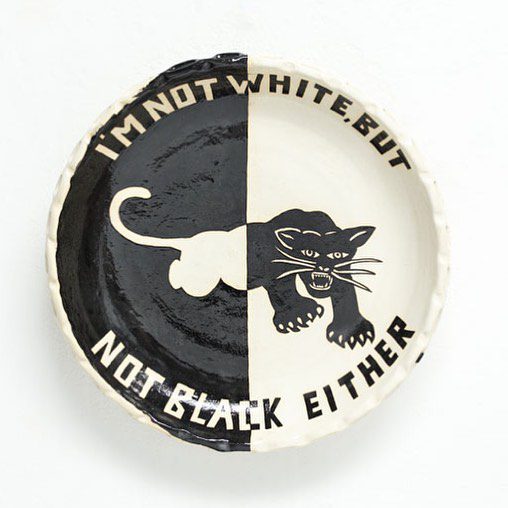 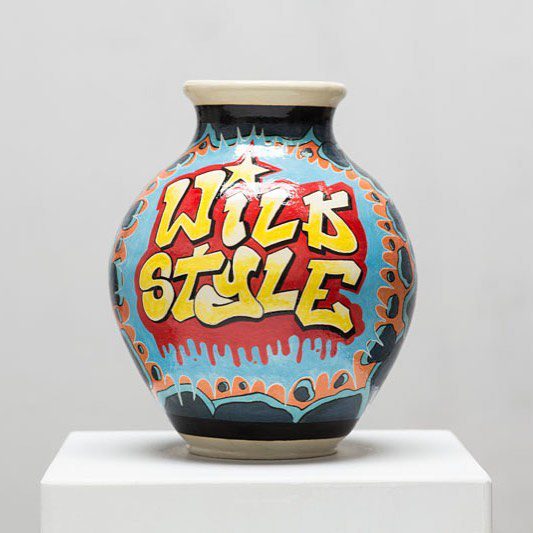 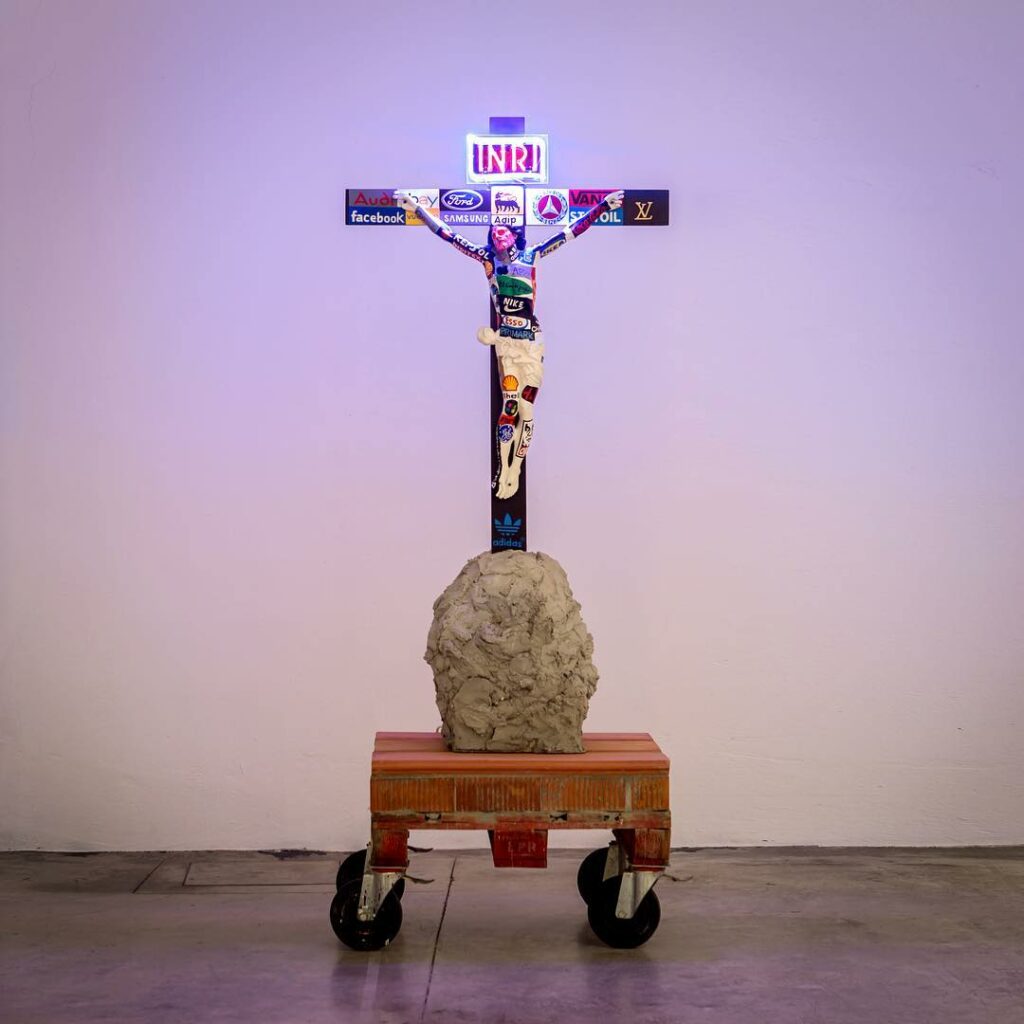 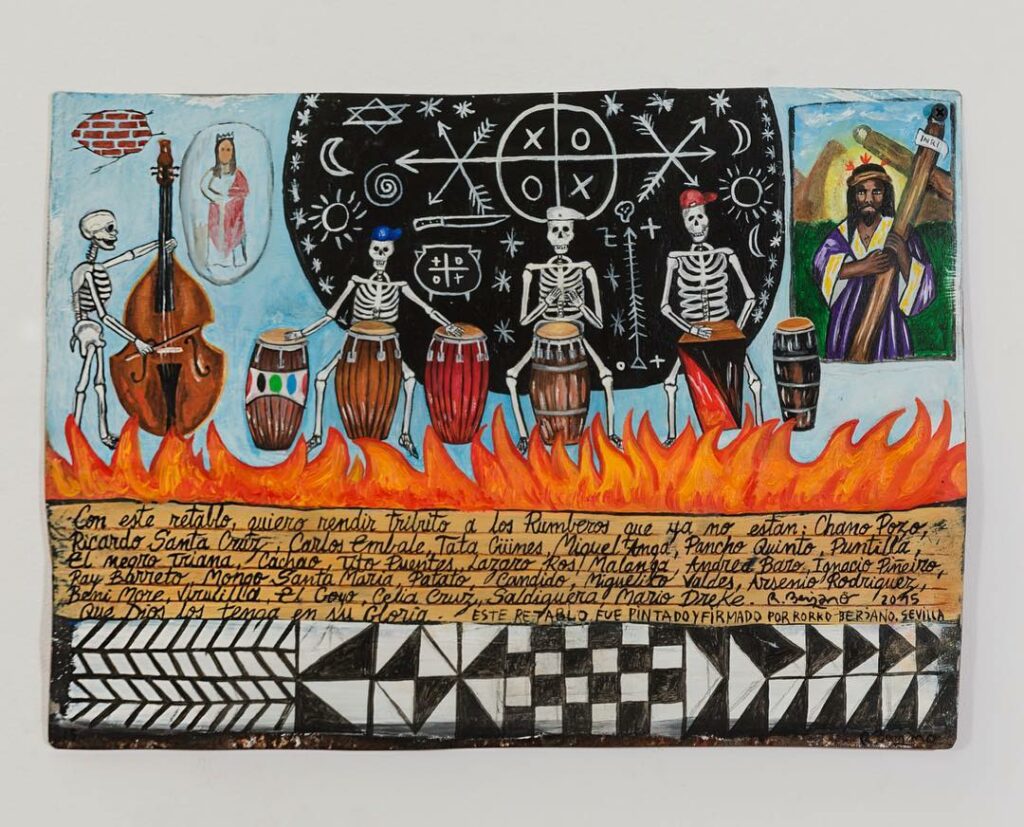 Lately I’ve been quite hooked on “The Eddy” series, written by Jack Thorne and directed by Damien Chazelle. The plot centers on a jazz club in Paris. Most of the main actors are real musicians and all the tunes that appear in the series are composed by themselves. Very interesting plot, photography, locations and lighting very good and continuous great music. The main protagonist is Jazz. I love this musical genre; I am enjoying it very much.

I always work with music, I am an insatiable devourer. The soundtrack of “The Eddy”, I think it’s amazing, very very brilliant. Digging into the musicians-actors that appear in the series, I have discovered Damian Nueva, a young Cuban of the new wave of island musicians, contemporary to projects like “Qué Volá”, Daymé Arocena, Alfredo Rodríguez and a long etc. Damian Nueva released his latest album “Orisun” a very Cuban product, a mixture of Afro-Cuban ancestral traditions with Jazz and contemporary music. Also lately I have been very surprised by the music of Ghospell, a national artist, with a very fresh jazz Rap style, very jazzy bases and very intelligent rhymes.

I finished reading “Las Negras de la Mar”, the latest in the collection of “Los Invisibles” by Jesús Cosano Prieto. The Invisibles Collection is a trilogy of books set in the Spain of slavery, narrating stories based on real events about the immense population of Afro descendants that lived in Spain, especially in Andalusia. The importance of these books lies in the narration of the cultural contributions of Africans in our culture, a cultural sediment silenced with clear evidence. Now I am reading “Porque la vida no basta” (Because life is not enough) encounters with Barceló by Michel Damiano.