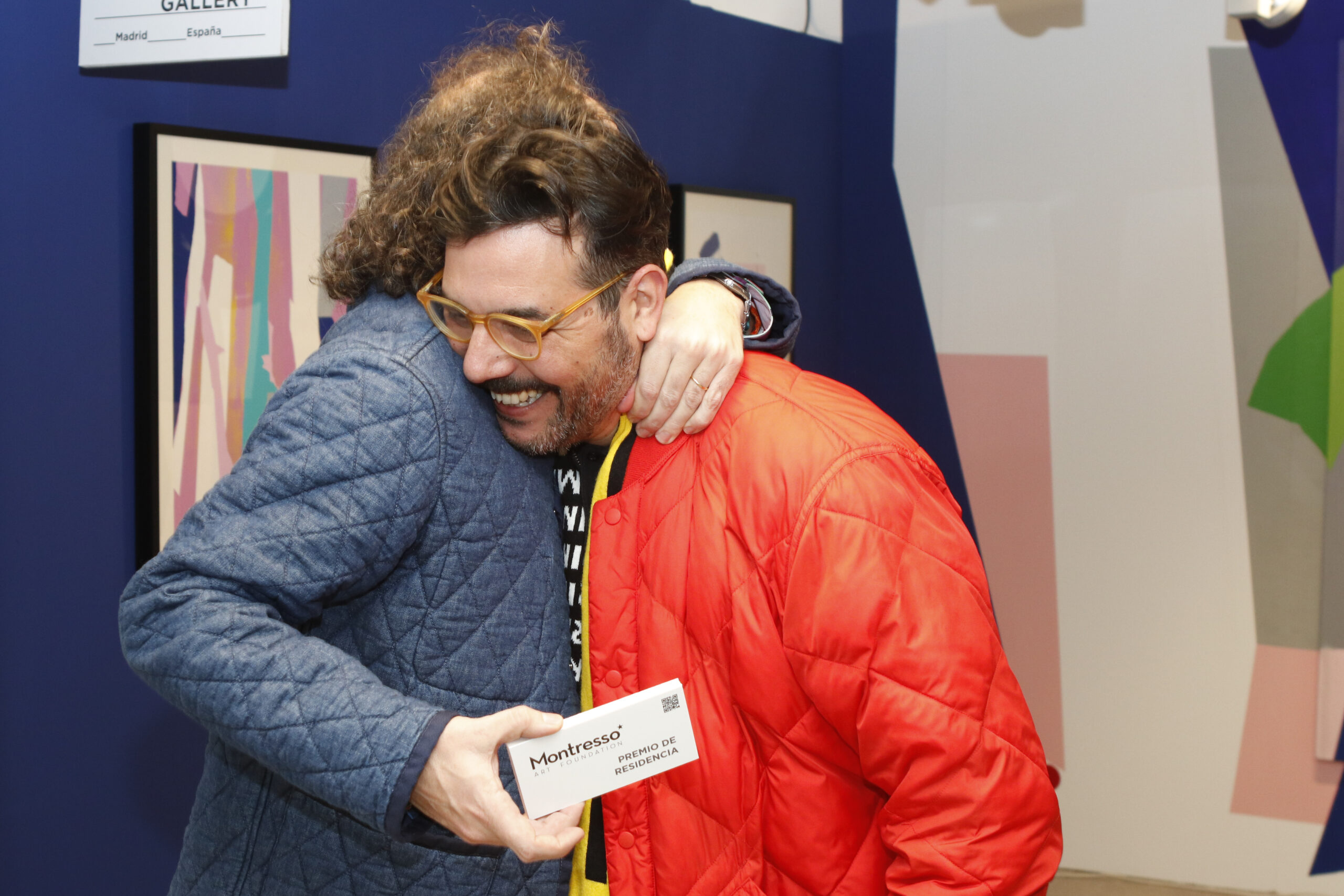 In 2021 UVNT had the privilege of having the Acquisition and Production Awards as a first time, the participation of the SOLO Collection, the MER Collection, Montresso*Art Foundation and the Nadine Foundation marked an edition that highlighted the value of the creative production and the trajectory of the winners.

This year, at UVNT Art Fair 2022, artistic creation has once again been recognized by the Foundations and Collections that decide to promote the talent of the artists and galleries participating in the fair, and this edition has also been reinforced with the incorporation of the Kells Collection and the Klasse Collection.

We have wanted to investigate in depth on the awarded artists and the meaning of their works. We also wanted to know about the selection process of the foundations and collections and the first thing that caught their attention about the works acquired and the artists selected.

Located in Marrakech, the Montresso Art Foundation is dedicated to the promotion and diffusion of established and emerging contemporary artists. The Foundation offers for the second consecutive year a residency award at the Jardin Rouge in Marrakech, with a duration of 1 to 3 months.

This foundation is mainly focused on “supporting artists with diversified techniques and a singular and personal imaginary” tells us Salomé Issahar-Zadeh, head of communication of Montresso Art Foundation, who assures us that “the anchoring of art in the problems of society” is essential to be part of the Jardin Rouge. Likewise, the work of Rosh333, represented by Garna Art Gallery at UVNT 2022, caught the attention of the foundation, which immediately noticed the Alicante artist’s ability to “capture the territory around him,” says Salomé. 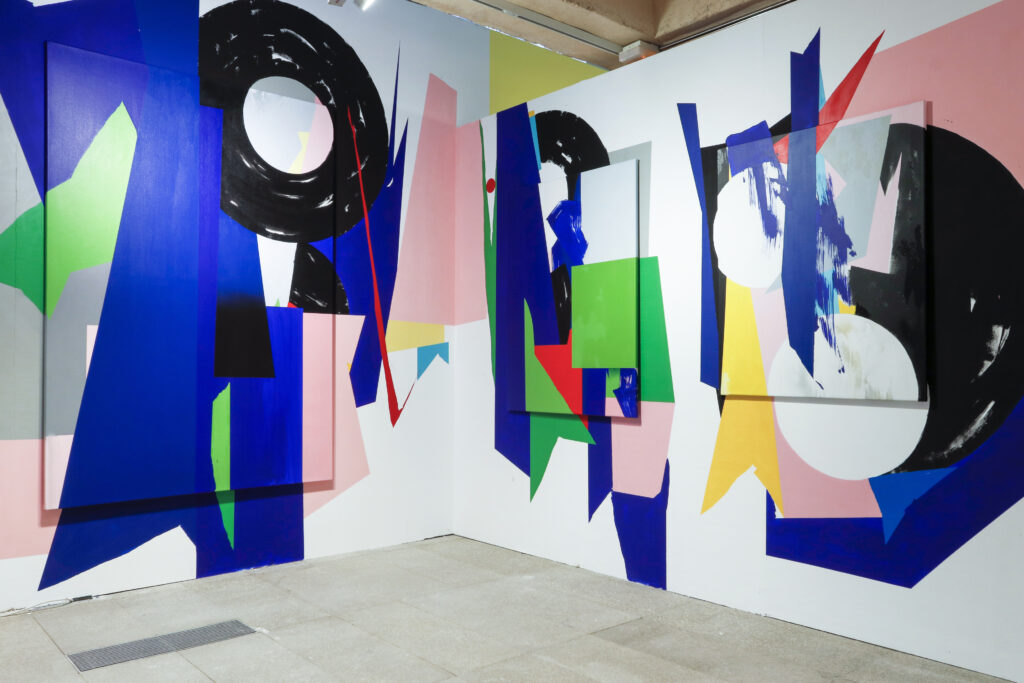 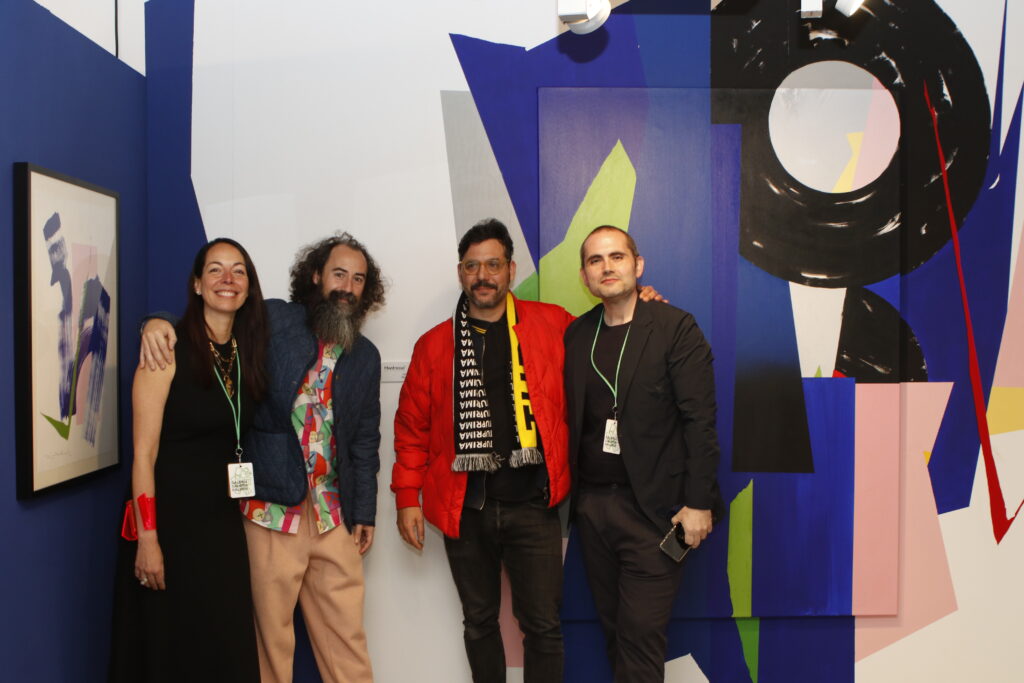 Applying multicolored strokes and playing with contrast, Rosh333 is characterized by transforming the spaces where he intervenes in an imaginary world. The residency award will materialize in a second part of his publication “I have no dog”, which he himself defines as “A guide to urban walks in which he simulates a drift in a circle” and which he intends to transfer to painting during his residency. “Although the project will surely mutate with the context of the space” concludes the artist.

The MER Collection, with its headquartered in Segovia, is the result of the dedication, perseverance and collecting passion of the married couple formed by Elena Rueda and Marcos Martín Blanco, and their son Rafael Martín. Rafael, director of the collection, states that his philosophy has always been to acquire new works from “here” and “now”, with a clear international purpose and the desire to maintain its current identity.

With this discourse he was captivated by the work of artist Jose Campos, known as Studio Lenca, and Carlota Pereiro, both represented by Arniches 26 gallery in UVNT 2022. The award-winning work under the title “Tio Hernan” is a collaborative piece made between two studios, Carlota’s in Madrid and José’s in the UK.

José Campos, from El Salvador, conveys through this portrait of his uncle the importance of making his ancestors visible “This portrait is a way of celebrating their narrative and making it visible in a very public way. Historically, our stories as immigrants are hidden especially in cultural institutions and museums” adds the artist.

Due to the civil war in El Salvador, Campos had to be displaced from his country, which is why he assures that this acquisition provides “stability and projection to the stories I am trying to share”. 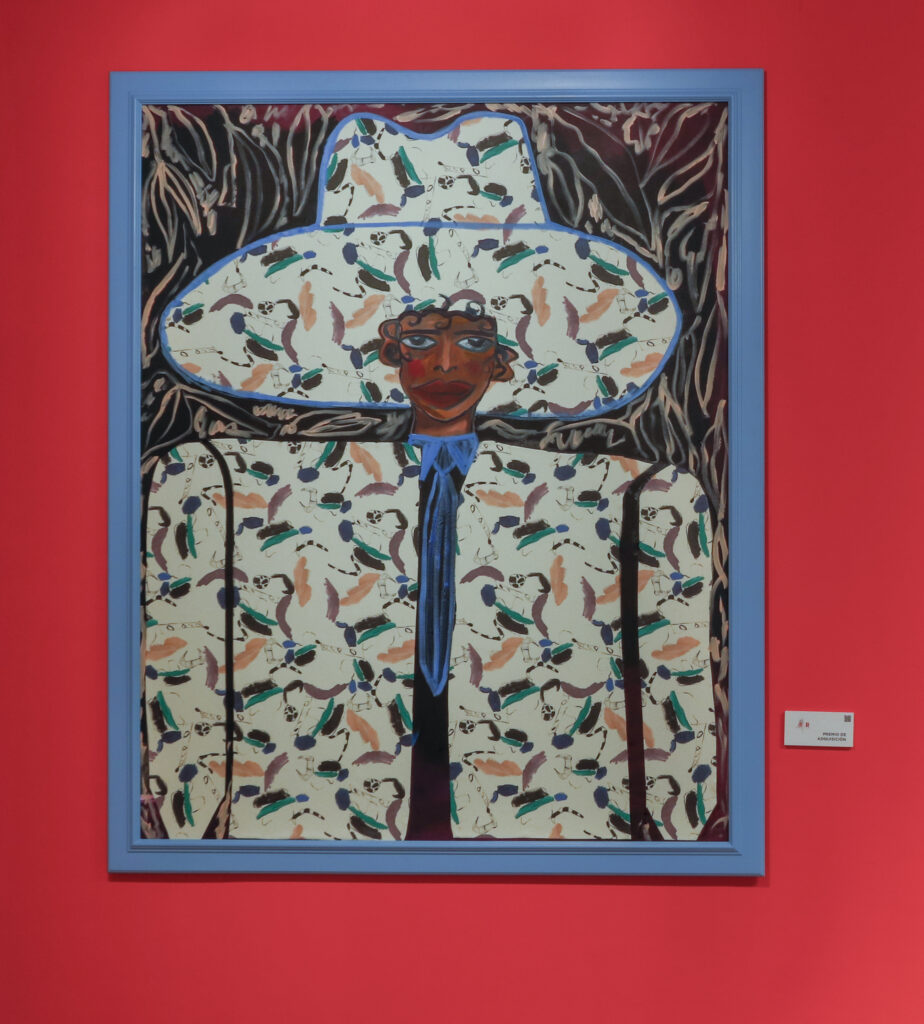 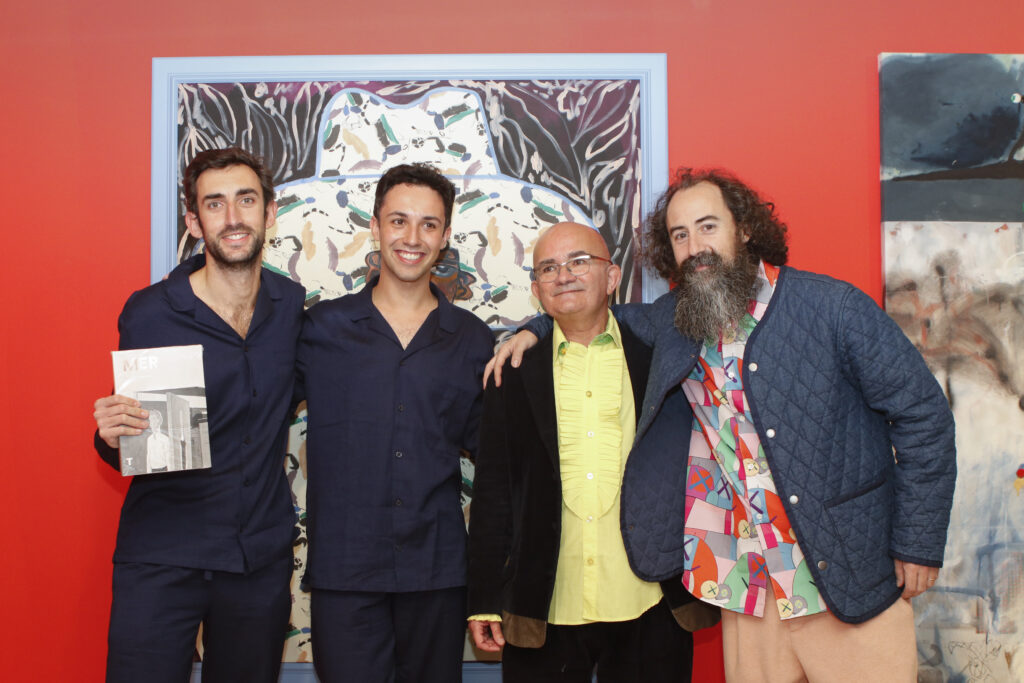 The SOLO Collection is an international art initiative based in Madrid whose objective is to promote, support and disseminate contemporary art through collecting and patronage. This objective of promoting and fostering creative creation was manifested in an Acquisition Prize awarded to Iván Forcadell, represented by Badr El Jundi gallery at UVNT 2022.

The winning work “15.01.2021” represents three figures in front of a background that contrasts by the use of complementary colors and “aims to narrate the most animal or rather less human part of each one” the artist tells us. In addition, the painting stands out for its technique, since Ivan innovates in his production by applying a copper enamel to the work.

“A feeling of happiness and reward of effort” is how Ivan tells us how he reacted when he found out about the award. 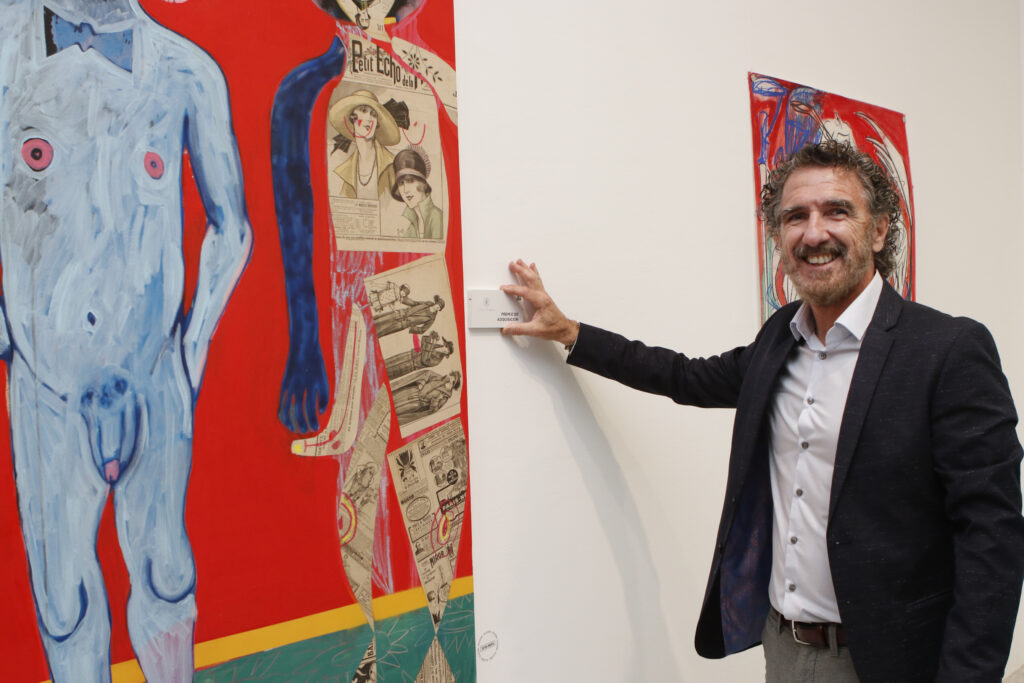 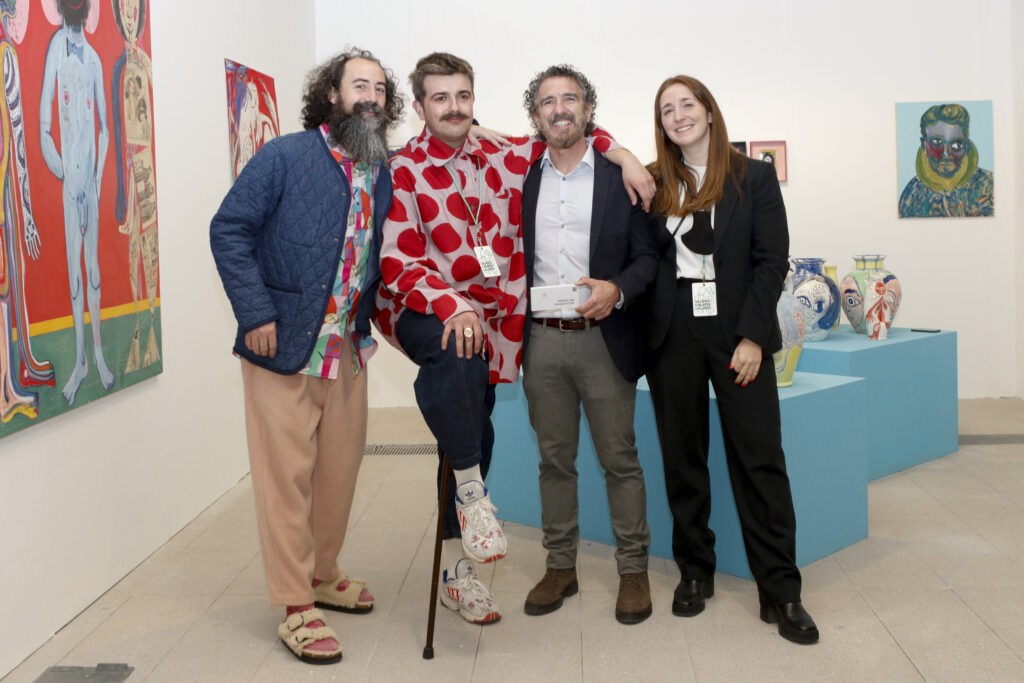 The Casa de Indias collection is permanently exhibited in El Puerto de Santa María (Cádiz), in the Contemporary Art Center that bears its name. One of the main focuses of this collection is the international projection, so during UVNT 2022 they take the opportunity to interact with pieces from outside the national territory.

Thus it has been the work of American artist Scout Zabinski, represented by Adhesivo Contemporary, that has received the Acquisition Award of Casa de Indias. “It has a completely different image to what is seen here (in Spain)” explains Cesar Jímenez, who together with Lola Martinez founded Casa de Indias in 2020, a project that goes beyond collecting by seeking to create connections with galleries that have solid visions and akin to them. 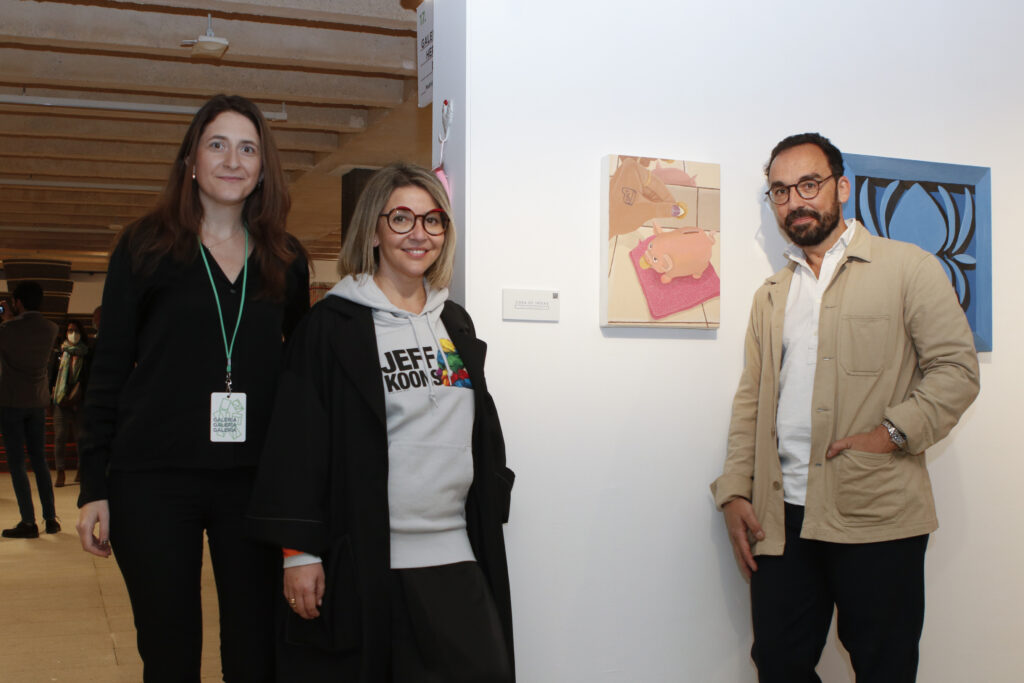 Zabinski’s work stands out for being deeply personal, the artist emphasizes that with each painting she sells “pieces of her soul”. The award-winning work “Fat Chance” was born during Zabinski’s residency in Mexico City, “These piggy banks are everywhere […] They remind me of my childhood and the way we humans “play” with very serious things” Zabinski tells us.

The artist shares how she reacted to the news “shocked but ecstatic” and Zabinski concludes that “This award helped me realize that I have no control over what happens, over the opportunities that present themselves, over who or what enters my life. All I can do is paint.” 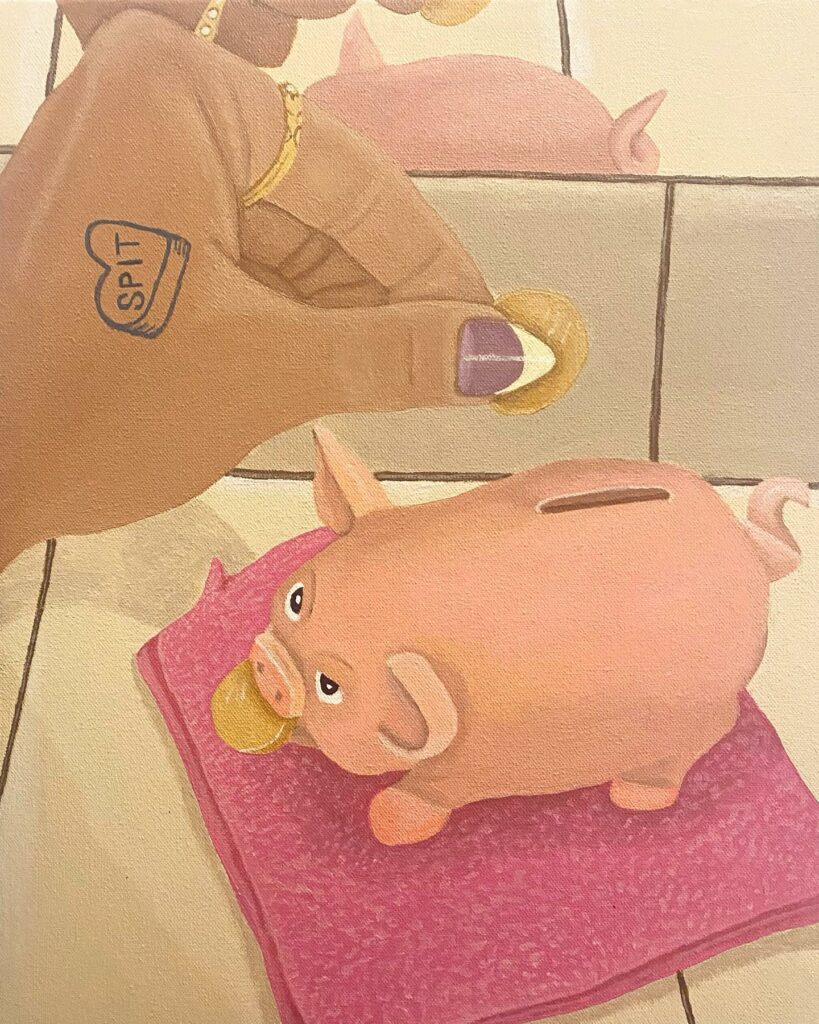 The Nadine Foundation has once again demonstrated its support for young artists and the fair. Expanding its awards focused on the recognition of emerging artists by supporting their creative process and maximizing their capacity for exhibition, production and distribution.

In this edition Nadine has awarded two Acquisition Prizes and a Production Prize, which consists of an economic endowment of 10,000 euros and a three-month residency in Madrid.

Iván Floro, represented by SC Gallery, was one of the winners of the Acquisition Awards. His work “Pinchazo Obligatorio” (Mandatory Prick) is based on a behind-the-scenes snapshot from the filming of Pulp Fiction, and his main inspiration was “the tension of the moment and the almost religious overtones of it”.

Daniel Fleur, represented by Wadström Tönnheim Gallery, has also been awarded an Acquisition Award by the Nadine Foundation. Through the exploration of a deeper vision of architecture in painting, on color and materiality, Fleur employs “historical landscape references” using a language that he himself defines as “digital”. 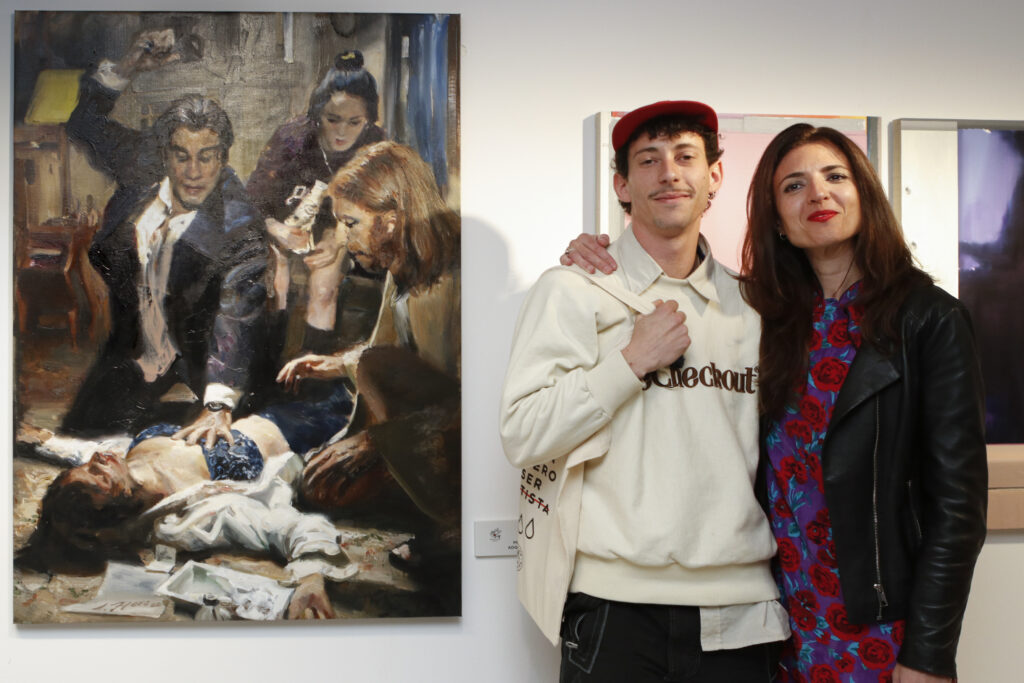 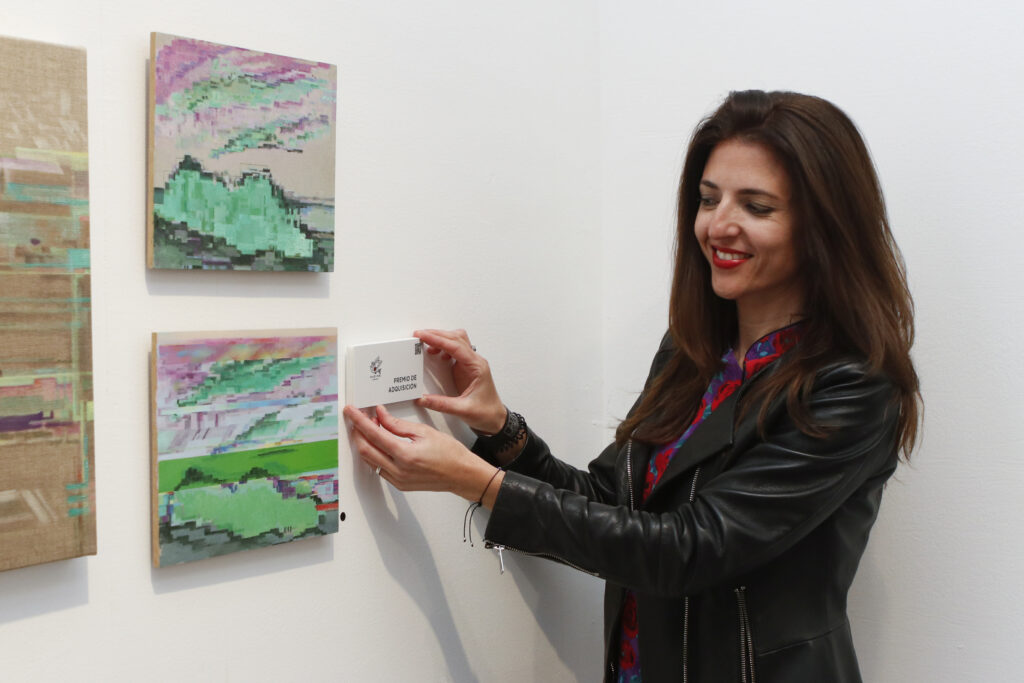 The Production and Residency Award was given to artist Ela Fidalgo, represented by La Bibi Gallery. Her project “Contemporary Narcisist”, which caught the attention of the Nadine Foundation, revolves around a reflection on the effects of social networks on the human psyche. Ela’s work stands out for its variety in technique, along with the use of painting, drawing and embroidery, the artist applies a palette of vivid colors that result in a work with a “naïve” touch.

“Contemporary Narcisist” will be developed in a second part during her residency in Madrid. The artist tells us that this award is an opportunity to “create a proposal more linked to sculpture and installation, ideas that have been in my head for a long time and that I will finally be able to realize in Madrid in these 3 months”. 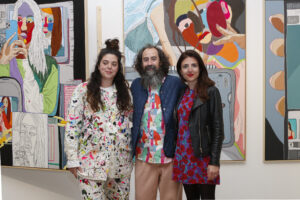 This year we have had a new Acquisition Award from the Kells Collection of Santander, by Juan Manuel Elizalde and Choli Fuentes. With more than 400 works to its credit, this collection stands out for the integration of new artistic languages such as photography and video-installation. 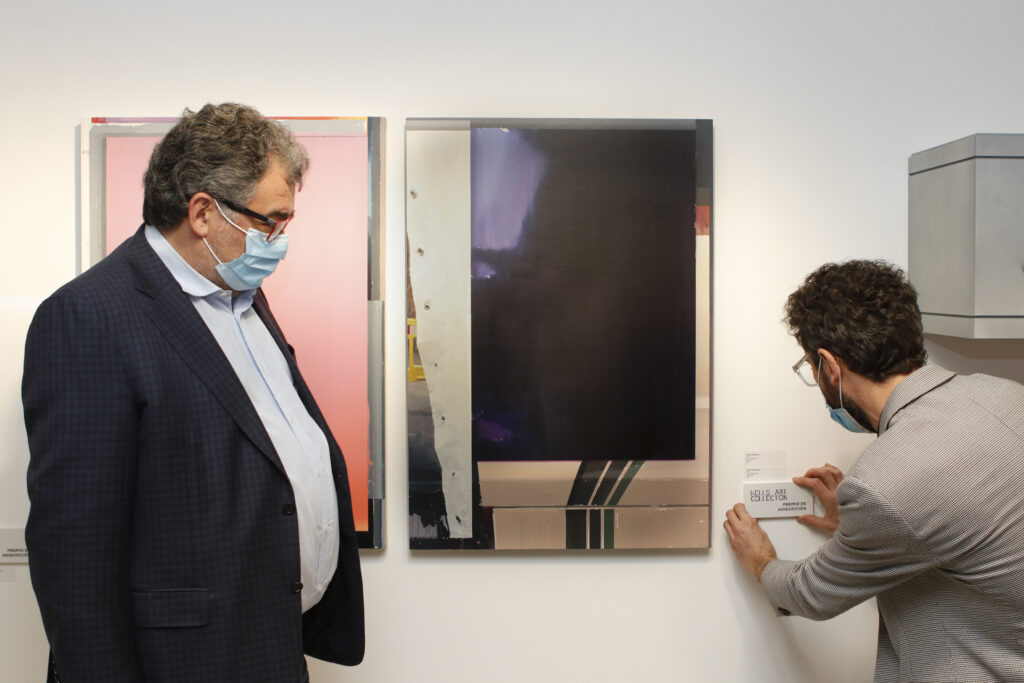 The Kells Collection has given this new award to the Navarre artist Amaya Suberviola. Represented by SC Gallery, Suberviola’s work focuses on attributing to painting characteristics that appear in the supports and devices with which we have contact with reality today. The awarded oil painting is part of her project “Screens” started in 2021, the painting tells us the artist herself that “it comes from the interpretation of different windows open on the desktop of my computer”.

This acquisition is a “compliment” for Suberviola, who assures that it has been a joy that such a collection appreciates her work.

Another novelty this year is the participation of the KLASSE Collection of the businessman, collector and patron, Jaime Colsa, to support the creation of artists and the informative work carried out by the fairs in the face of the difficulties the sector is going through due to the pandemic.

The KLASSE Collection has made its debut with an Acquisition Award that has been granted to the artist represented by La Causa Galería, Imon Boy with his work “Use Masks”. Imon Boy’s paintings are characterized by the play of light and use of vibrant colors, with a clear influence of graffiti, his works present everyday scenes while intimate. 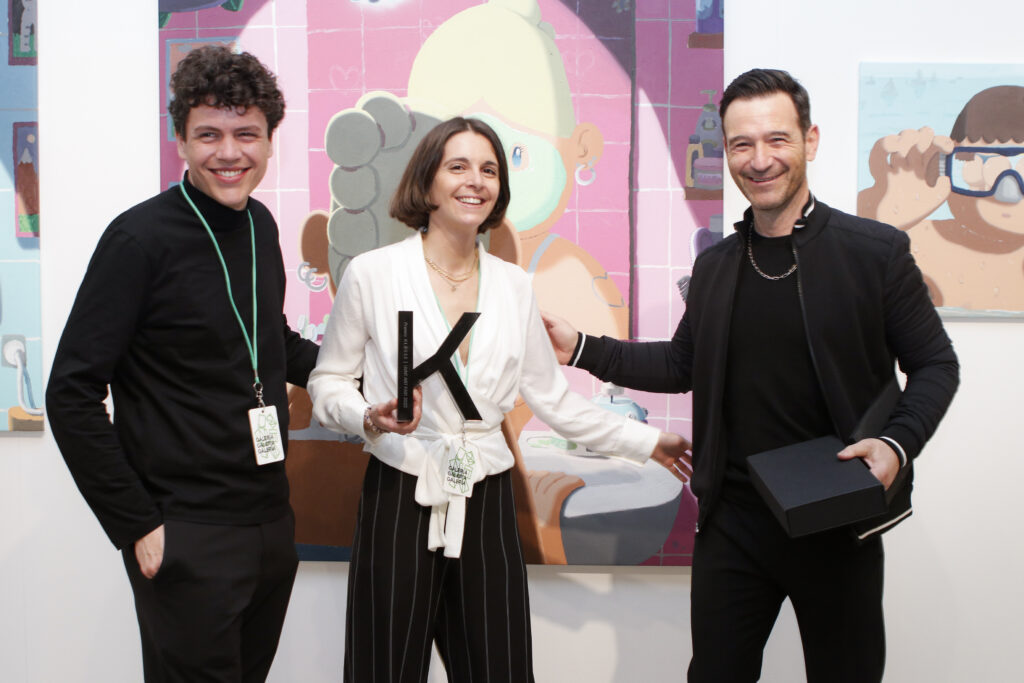