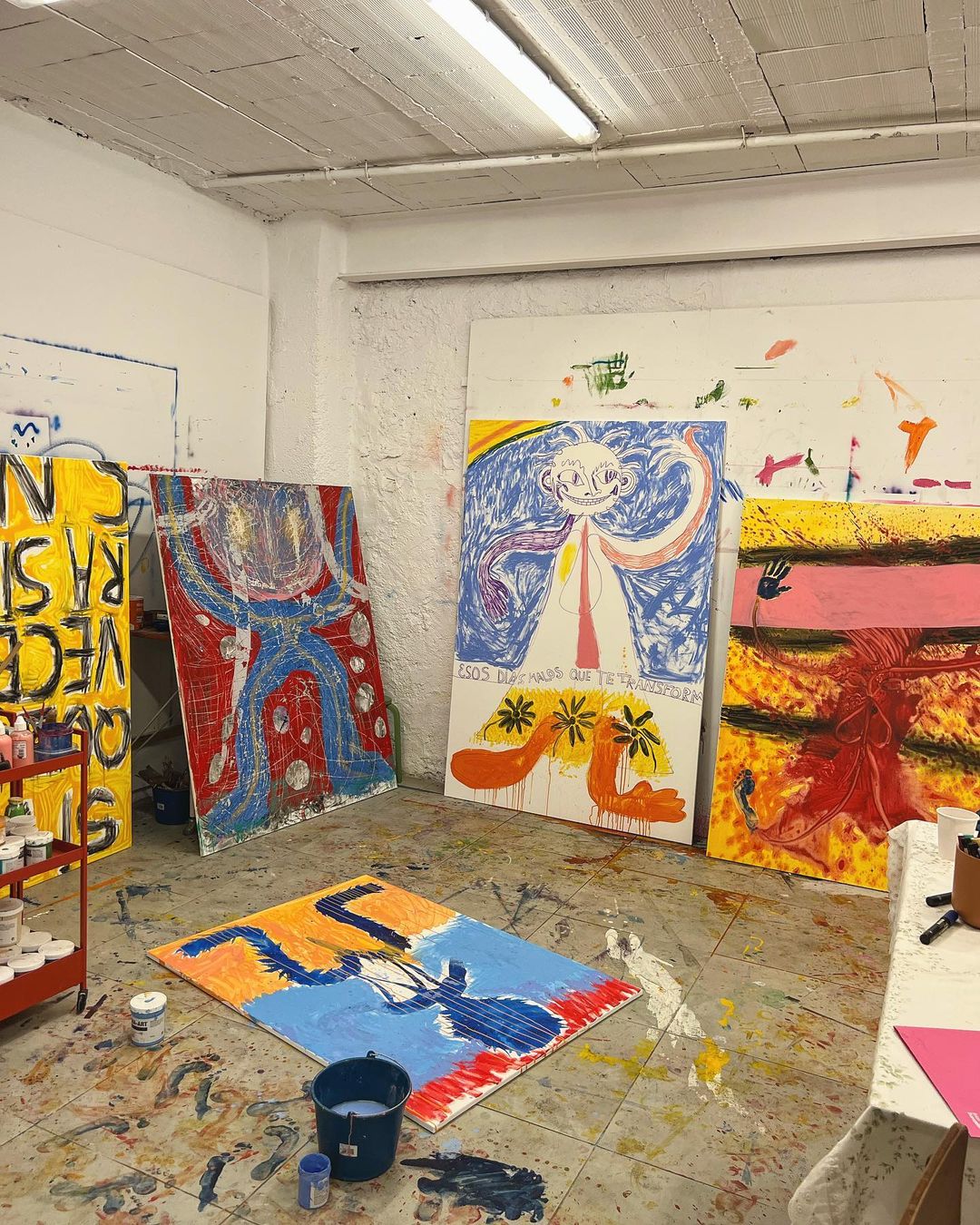 The art of collecting often goes far beyond having a painting or sculpture in a home, some collectors see it as a way of harvesting a relationship with the artist and creating a better understanding and empathy towards their work. When acquiring a work there are numerous factors that come into play, some may make their decision from whether they like the piece or not, while others prefer to go more in-depth with the artist behind the canvas. Establishing a friendly relationship with an artist allows us to understand what motivates them, what inspires them, their methodology, and provides another level of appreciation of their work.

This is the vision of Cesar Jiménez y Lola Martínez-Rivero and their project Casa de Indias. Located in Puerto de Santa Maria in Cádiz, Spain, they have devoted more than five years to supporting emerging contemporary artists. Proof of this is their acquisition awards they have granted the last editions of UVNT Art Fair as well as their art residency where they have received numerous young artists like Ivan Forcadell with whom they have built a delightful family-like relationship.

Since 2019, Casa de Indias has been developing a non-profit program of artistic residencies with which they try to build bridges between new talents and the main distribution channels in contemporary art; in addition to motivating new collectors. In 2020 they developed the residency program with Ivan Forcadell, a multidisciplinary artist from Alcanar, Spain, whose work includes painting, sculpture, installation and performance.

We spoke to Cesar and Ivan to learn more about the keys of their lasting and genuine relationship, as well as the key to establishing these connections.

“We met Ivan at one of his first exhibitions. It was a spectacular exhibition from an aesthetic point of view, the pieces were very powerful and then the whole staging was impressive”. says Casa de Indias co-founder Cesar Jimenez. “I remember perfectly that there was a small performance of Ivan disguised as a grandmother giving condolences to the people who were entering. Until that moment, we didn’t know anything about Ivan, he was a completely emerging artist. That was four years ago”, continues Cesar.

However, it was not until through the residency program of Casa de Indias when Ivan and Cesar consolidated their friendship.  “We select artists that we believe have the potential. We started to consider Ivan, for us he met all the characteristics we looked for: he was emerging, he was young and talented”, remembers Cesar.

In Casa de Indias the selection process for the residency is simple and based on one element: energy. “We try to get to know the artist a little bit by talking to them and see what kind of energy he gives off and determine if we have a certain personal affinity because he is going to be spending a lot of time with us” says Cesar. For Ivan Forcadell, the affinity feeling was mutual  “For me there is nothing better in the world than finding people and thinking this is home, and that is what happened when I met Lola and Cesar” says Ivan. “During the residency I basically became part of their family and spent a lot of time with their daughters” he adds.

The harmony between Ivan and Cesar also developed into a mentorship-like relationship “They advise you and tell you from the purest form of affection the reality. They don’t try to soften you up, and directly tell you Look Chiqui, this is crap or this is very cool, keep going this way. And when this comes from a point of respect and love it is wonderful” highlights Ivan.

The affinity also stemmed from understanding each other “It is essential to be very honest and comprehend one another” says Cesar. “Lola and I work a lot on communication, and taking into account that sometimes the artist in the residency can have a bad day, but that does not define them” he adds.

Ivan’s generosity is what really put the cherry on top in the relationship, which Cesar stated that “it is something a lot of artists lack of” adding that “the ego is the biggest enemy of the artists, in Casa de Indias we are extremely generous, therefore we expect reciprocity with that”. In addition to this, Cesar and Lola strive to make long lasting relationships with the artist “We always try to let the artist know that we will be with them the whole way, and we always remind them that it is very much more important to keep five loyal collectors, then to try to have as many as possible” says Cesar.

This loyalty reflects in the passion collectors can have with certain artists, something remarkable between Cesar and Ivan which also transmits onto other potential collectors “With Ivan, our good relationship with him manifested in the way we spoke about his work with other people” says Cesar. Because the art collector community in Spain is still very niche, which makes everyone know each other “We talk to each other about the Spanish art scene all the time and we really emphasize this to other artists” he adds. “We are a clan, for better or for worse, but we try to have each other’s back all the time” states Ivan Forcadell.

This art collector community is expanding its frontiers due to the rising of social media as a way of networking. Nowadays, many collectors can contact the artist directly through their Instagram account, which sometimes puts in risk the figure of the gallerist as a mediator. “Many collectors do message me about my work, but I always give them my gallerist contact directly to be honest” states Ivan. “However, it is interesting how collectors can now be witness of the artist’s life and experience that storytelling that takes place in the platform, which adds more value to our work” he adds.

For Cesar, his opinion on this is firm “I always say that if you are an artist and you are also selling your art, it means you are bad at one of these. If you make art, you are an artist. And if you sell art, you are a gallerist. You can’t be both” he says. “However, I do believe IG is important as a display of your work, but it should always be the gallery as a medium to obtain those pieces’ ‘ states.

Ivan and Cesar also talked about the importance of art fairs, in the last edition of UVNT Lola and Cesar gave an acquisition award for Casa de Indias, also participated. “I absolutely adore art fairs, I find it very exciting the moments of production and building the stand.” says Ivan. “I believe it is wonderful that all the people come together with the same interests, and I just like to meet and talk to lots of people” he adds.

Although, for collectors and artists the art fair experience can be a bit different. “For us it is an essential part of connecting, we do give the acquisition prize, but mostly we like to discover and meet new galleries. It is the perfect opportunity to come face to face with galleries that are not in your city and see what kind of energy they give off as well.” says Cesar.

Finally, when asking Ivan if he would ever start collecting art he curiously told us about how between artists there is a sort of exchanging market “Unfortunately, many artists don’t have enough money to collect art” states Ivan while laughing. “But it is interesting to see how we exchange work between each other, so at the end we do have a collection that we sort of payed with our own pieces” he concludes.