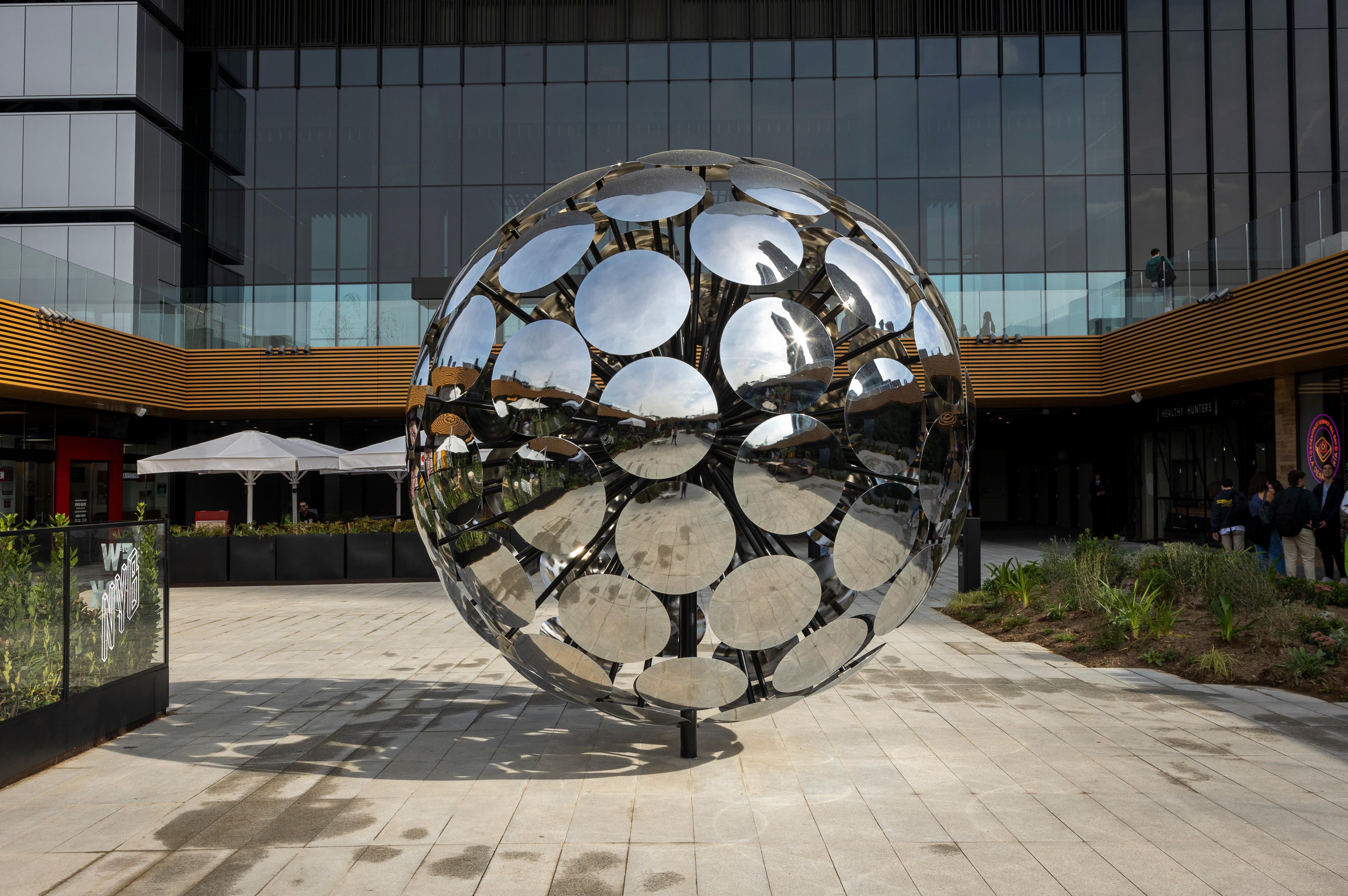 Through elements that often represent tools that condition human behavior, SpY elaborates his public art installations. His practice has evolved over the course of his career to encompass an increasingly spectacular compilation of large-scale installations and interventions, each more ambitious and impactful than the last.

While maintaining his anonymous identity, SpY captivates viewers while actively engaging them in the artistic process. He employs inventive reflections and striking formal techniques in his work, raising relevant questions about the reality of human connections. His designs interact with the urban environment, disturbing its daily routines and investigating it as a blank canvas full of potential.

His latest setting has been the new Caleido space where he has installed a sphere composed of traffic mirrors. We talked to SpY to tell us about the process behind the creation of a work like this, as well as other projects he has done this last summer. 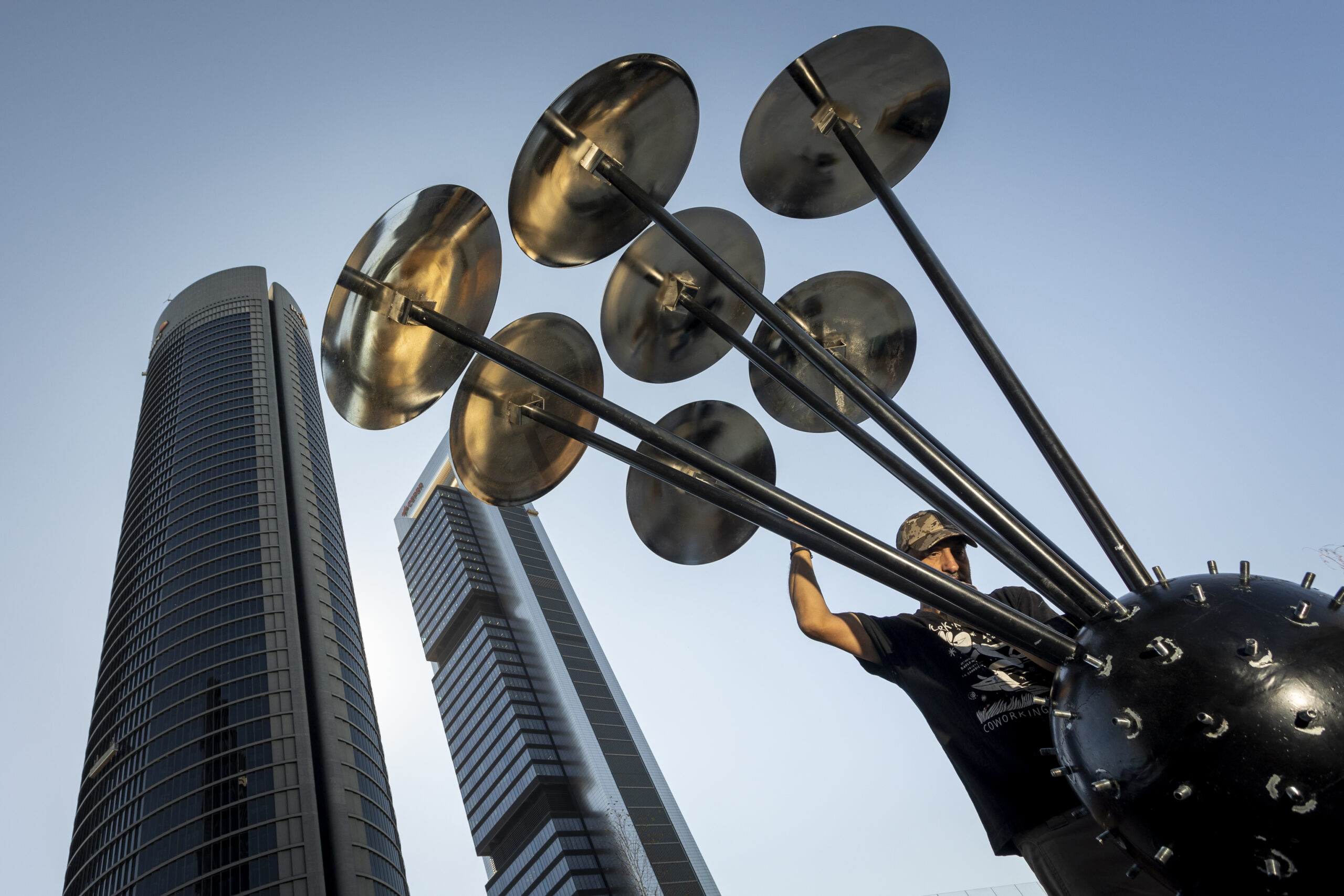 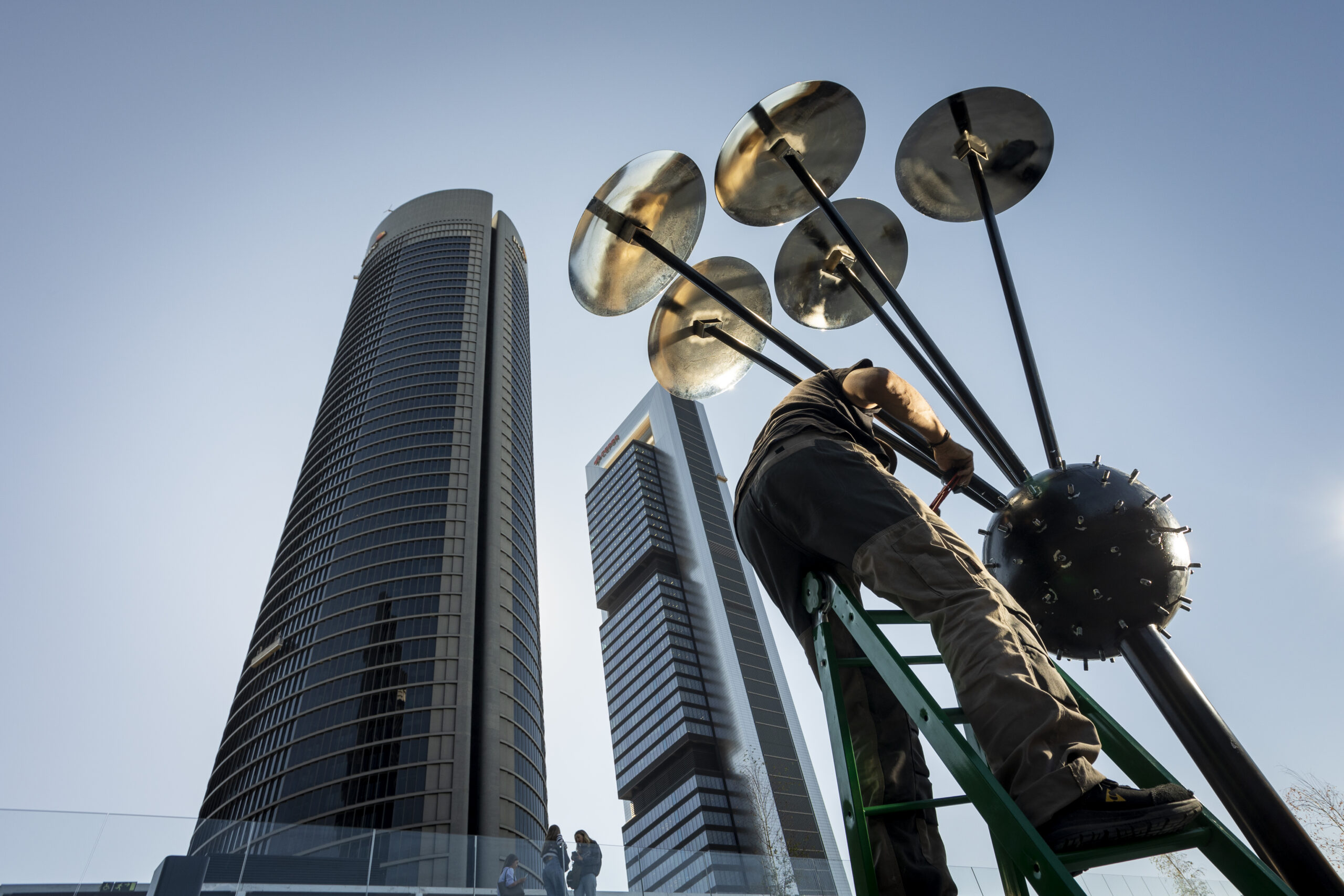 What was your inspiration for the Caleido installation?

In part of my projects, I work with the circle and the sphere as a geometric element with which I frame certain concepts and symbolic implications. The perfect figure, the circle and the circular as a complete figure without beginning or end, is the symbol of primordial unity.

How would you define the work you have done for Caleido?

The sphere is the three-dimensional extension of the circle and gathers all the dimensions in a single element with interior and exterior. From this spherical geometry the sculpture was conceived from a truncated icosahedron formed by convex mirrors. The balanced distribution would form multiple repetitions of the reflected exterior.

In this case the security mirrors that compose it allude to how contemporary social environments are gradually being transformed into spaces that are inescapably watched 24/7, both in the physical space of modern cities and in the virtual one, where we spend more and more of our lives. 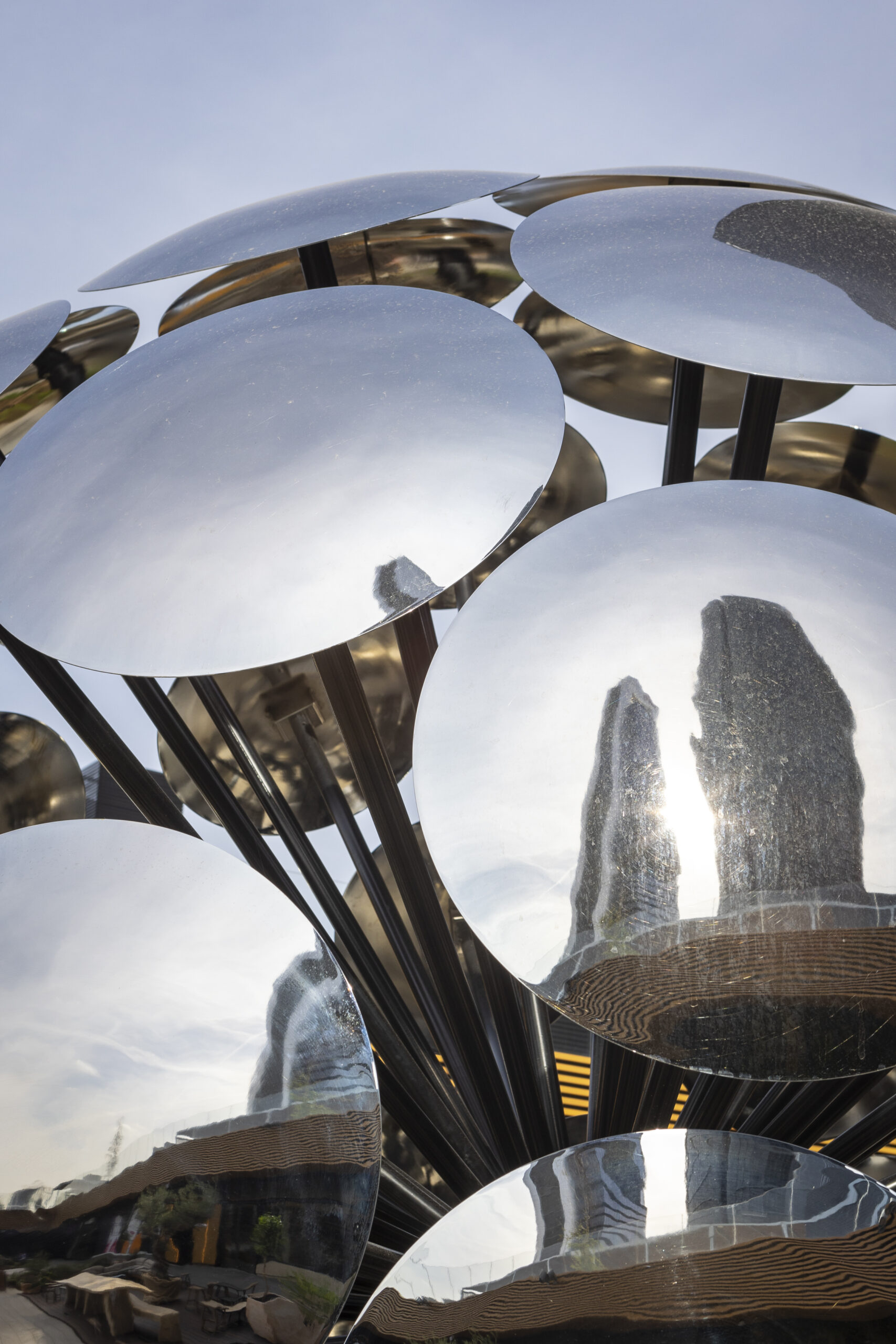 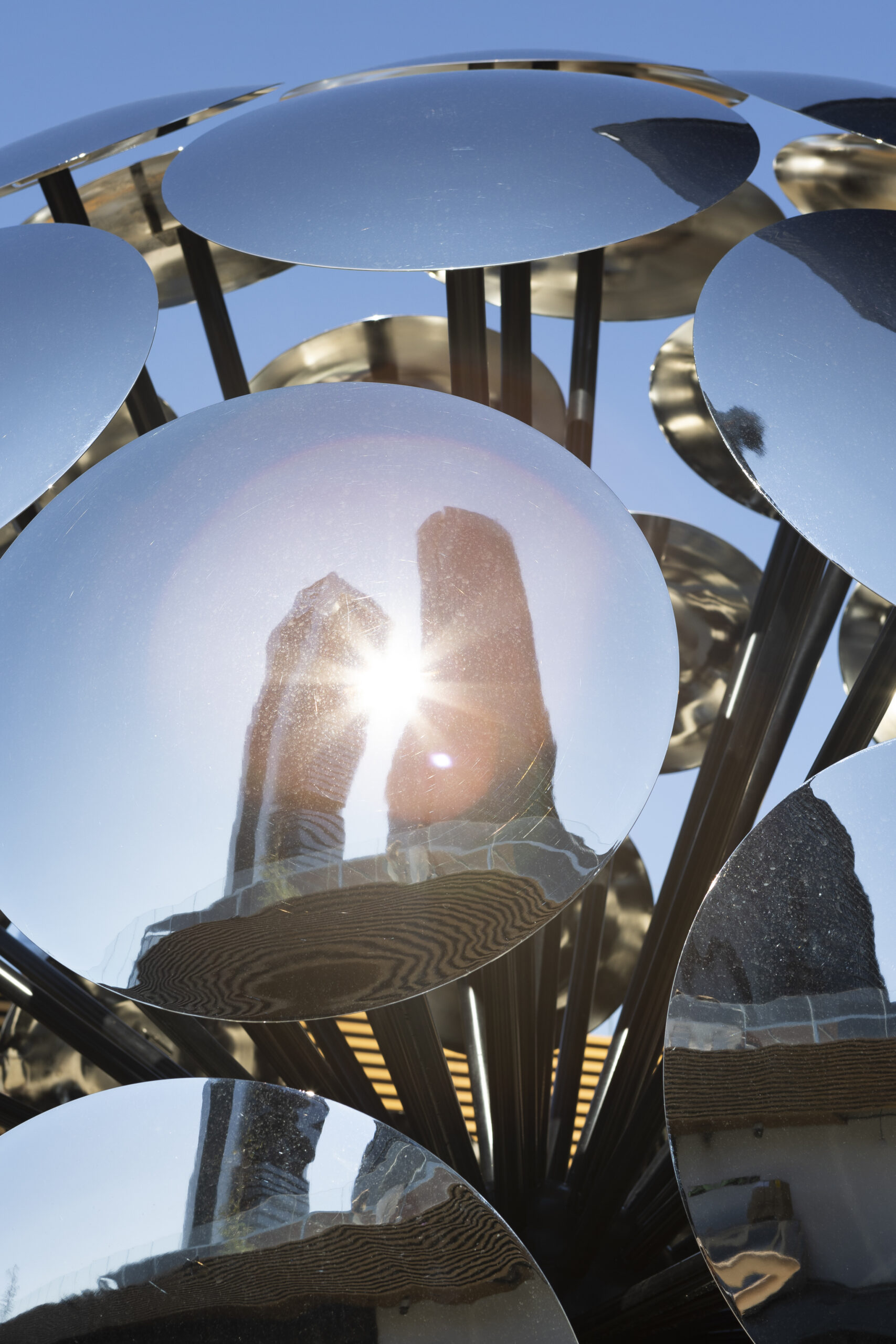 What do you want to communicate with the piece?

The piece works with concepts such as identity, privacy, and the relative nature of reality. It generates an effect of fragmentation and visual multiplication that extends beyond the work itself due to the action of visitors who capture and share images of the installation on the internet.

My purpose in my projects and in this specific public sculpture, is to have a dialogue with the public and the context through the elements that I extract from the urban environment. 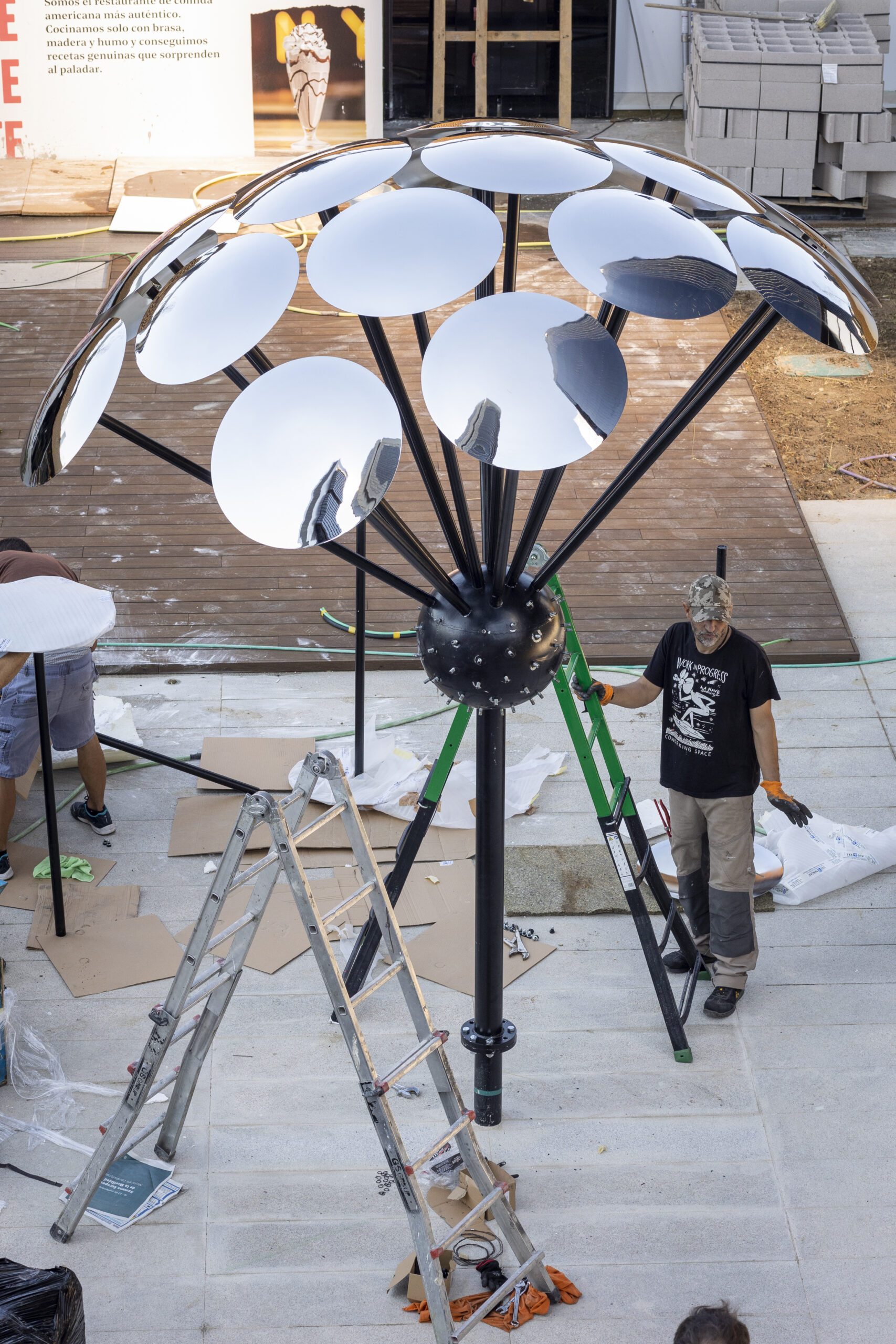 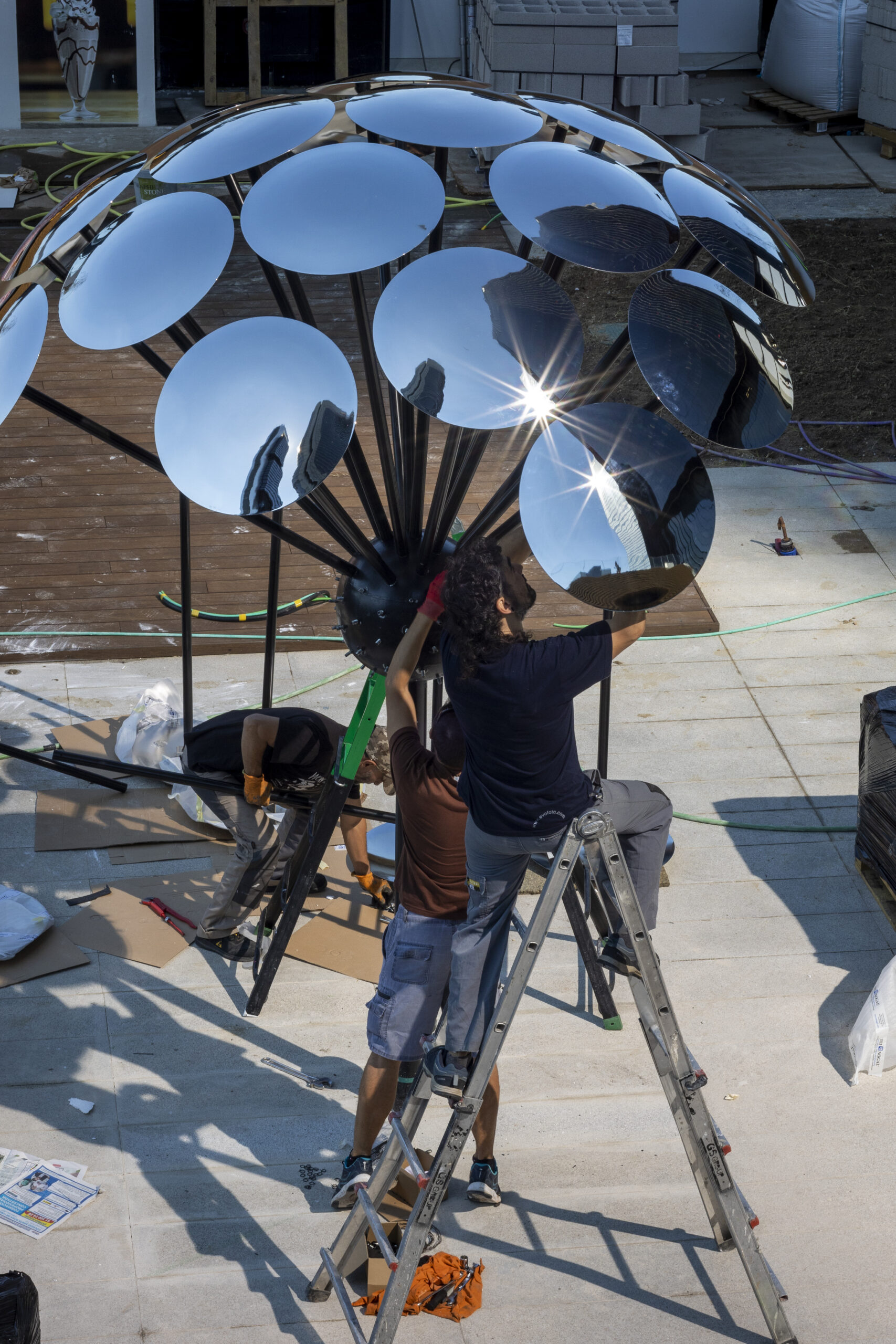 How was the process of creating the work?

Each project ends up being a learning journey because there is never a work like the previous one. It always involves new challenges where we seek to understand and connect new tools, propose different research processes and surround ourselves with the best possible team to carry them out.

It is about creating new works from the ordinary. In this case, surveillance mirrors. You start the process based on elements already known to most people, but if you regroup them to form a new combination, you are already creating something new and memorable.

How did the idea come about?

We started from the spherical element to create a parametric distribution of the mirrors and form this element. A simple dandelion gave us the keys to understand that the best way to distribute it was to use the pattern of a truncated icosahedron, basically the way the pentagons and hexagons of a soccer ball work. From each edge comes a stem from the nucleus that reaches a mirror forming the piece as a whole.

Almost 50 people have been involved in this work, including digital disciplines, craftsmen, logistics, organization, etc… 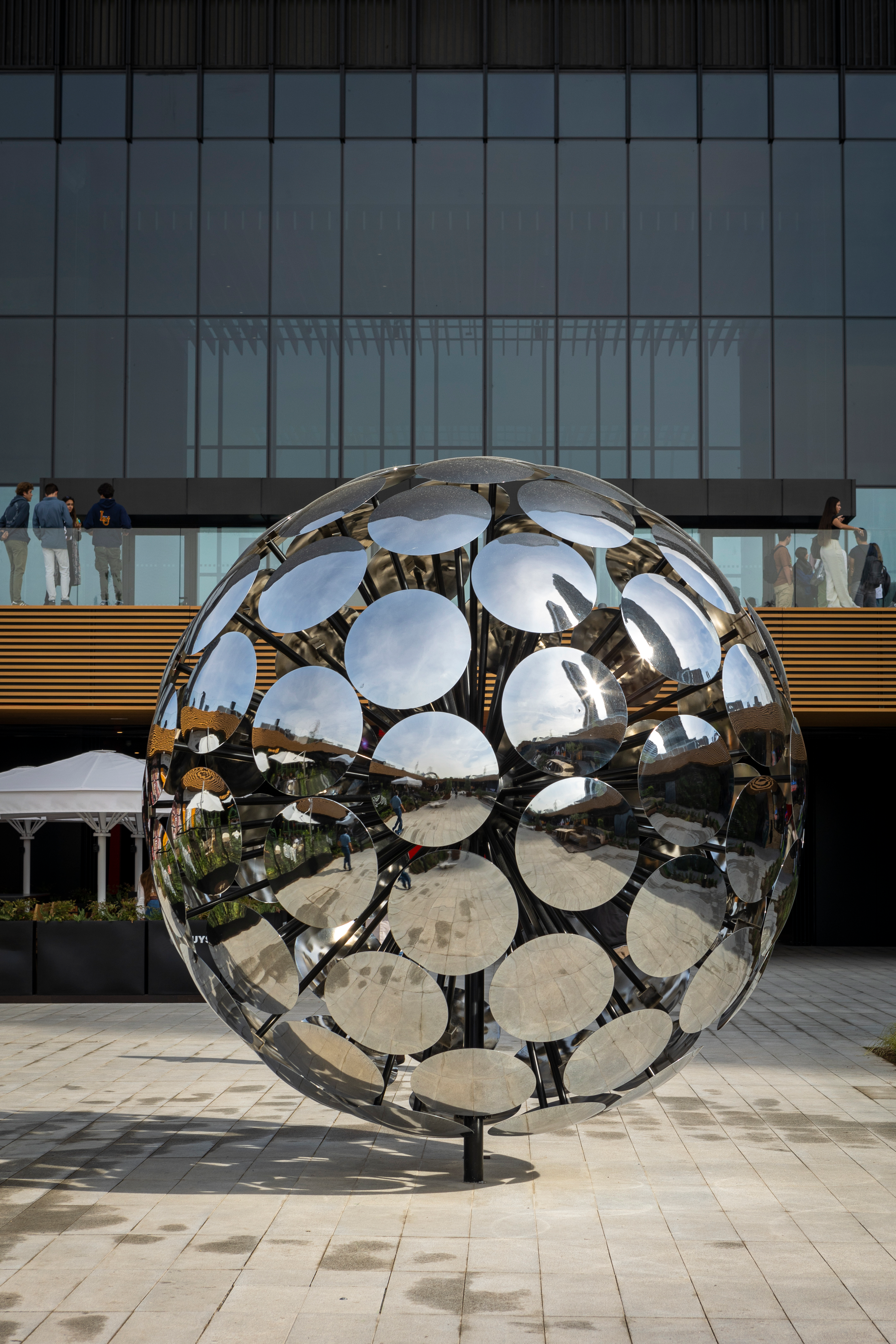 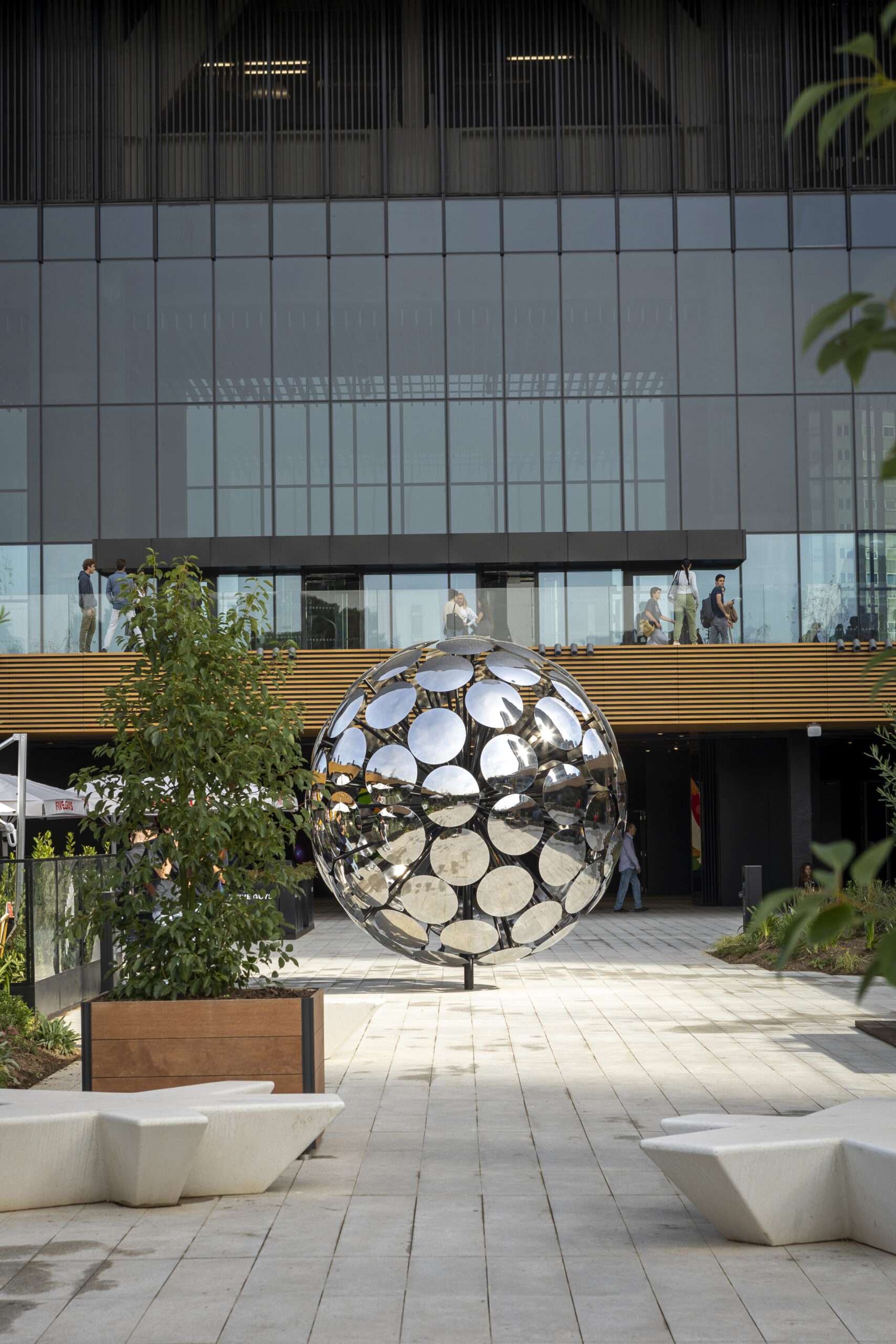 Do all your recent installations share a common thread?

I look beyond the formalism or aesthetics of the works, that my own artistic attitude and that of the public become a way to build the work as a whole. My purpose is to address the public directly in order to generate reflection and dialogue, to question them and make them work as active, not passive subjects.

Is there a common statement among your works?

Through my works I want to raise important questions that we as a society should keep in mind. The speed at which data management is evolving and the absolute loss of privacy is an issue that worries me because the limitation of freedoms is always consolidating towards more and more invasive social control. This search is formalized through conceptual contrasts between the aesthetics of my works and the difficult connotations of the objects with which they are built, often elements used to condition people’s behavior.

What projects do you have in sight that can be counted?

The Studio is researching and experimenting with kinetic art in movement and in the use of new tools and supports that combine the digital, the mechanical and the electronic with elements of the urban imaginary that we commonly find in the streets of any city.

We are currently working on a large permanent kinetic installation for the atrium of a hospital in Switzerland. It requires a sophisticated engineering work that integrates seamlessly into the architecture and a custom programming system that will bring to life all the movements of the work. It is a project on which we will be working with an engineering company and 2 architectural firms and will last for 2 years until the hospital is completed and put into operation.

We will close the year with many national and international projects in Madrid, Bilbao, Egypt, Riyadh, China, Uk and Switzerland.

One of the highlights will be the installation of a large sculpture in Egypt in front of the pyramids of Giza for an international art event. 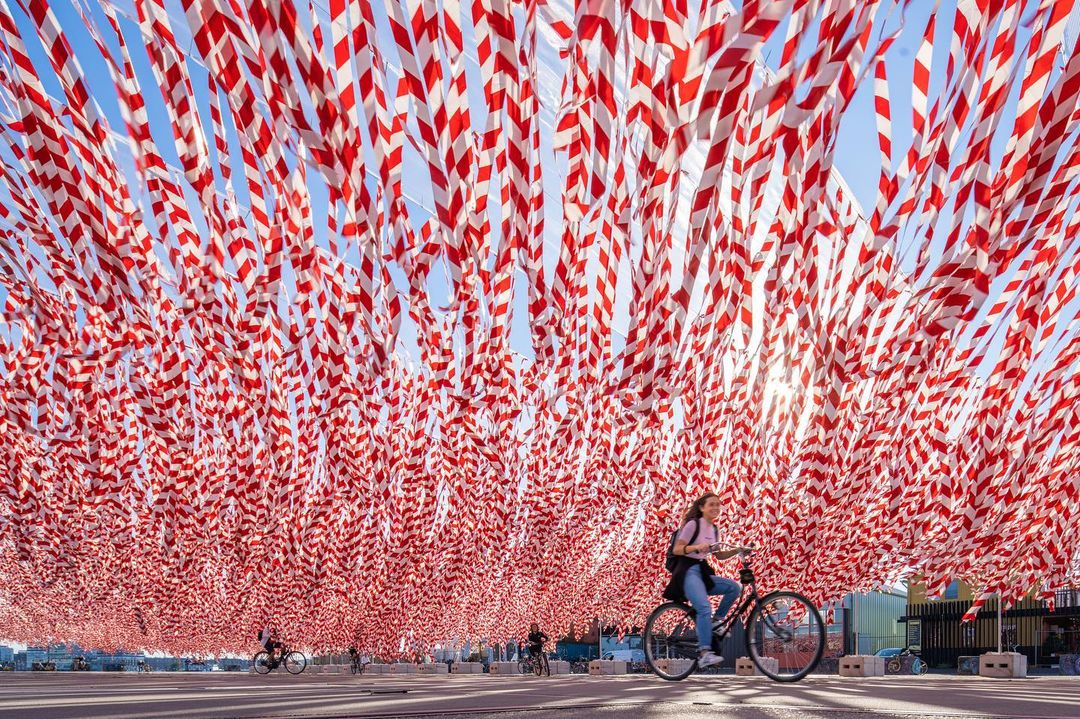 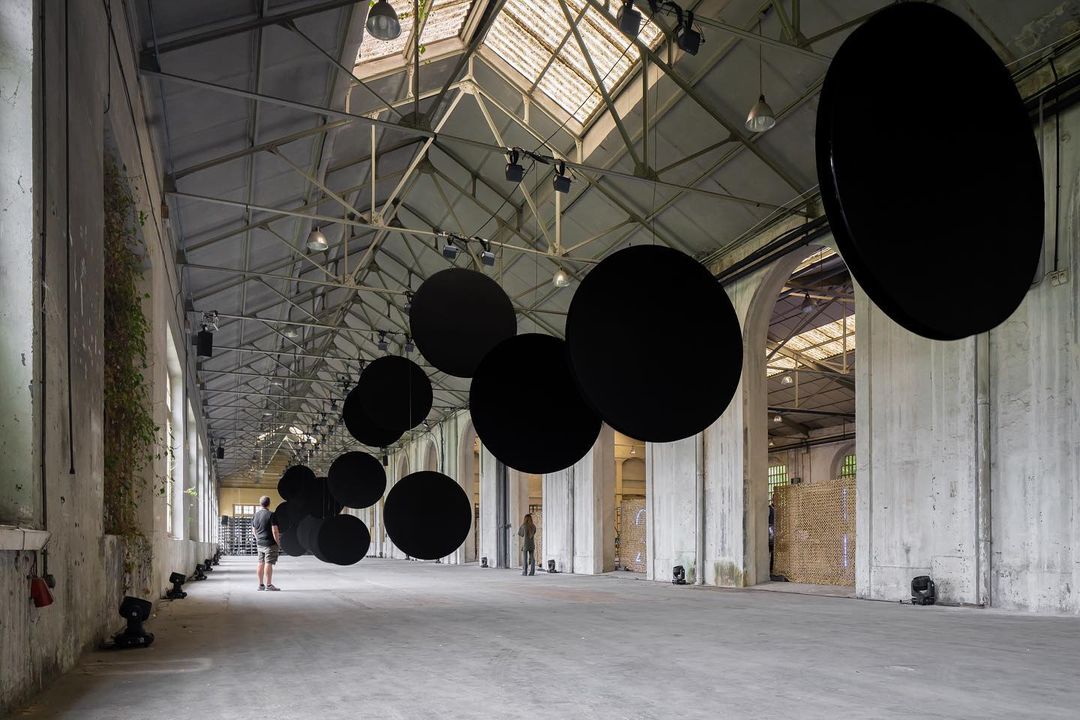 Do you approach projects with institutions in the same way as those you develop freely in the public space?

Obviously they are not approached in the same way. Institutional or private projects involve different promoters with very different objectives and interests. From the cultural, political and brands among others, the breadth of proposals found in cities around the world impact in one way or another in the lives of neighbors and citizens who have to live with them.

I believe that as an artist your proposals do not have to seek the complacency and acceptance of the largest possible audience. You have to be faithful and coherent with what you want to express, and work within an artistic rigor even if that does not please everyone who receives it. Now, you have to understand the contexts where you exhibit your works and work on them accordingly, because we have an important responsibility when we share our creations with the neighbors and residents who cede their spaces, otherwise we will not be very different from the massive advertising noise imposed.

We have seen that you have done many projects this summer, which one have you enjoyed the most and why?

Recently we have made a kinetic sculpture called ECLYPSES of 60 mt long composed of 20 mobile backlit discs and a sound system in the warehouses of the old arms factory of La Vega in Oviedo for the LINK festival.

This work involves visitors in a unique experience through the modulation of scale, light, color and music. The different elements are conjugated through choreographies that shape a succession of hypnotic and immersive patterns.