Demystifying The Art World: A conversation with @freeze_magazine 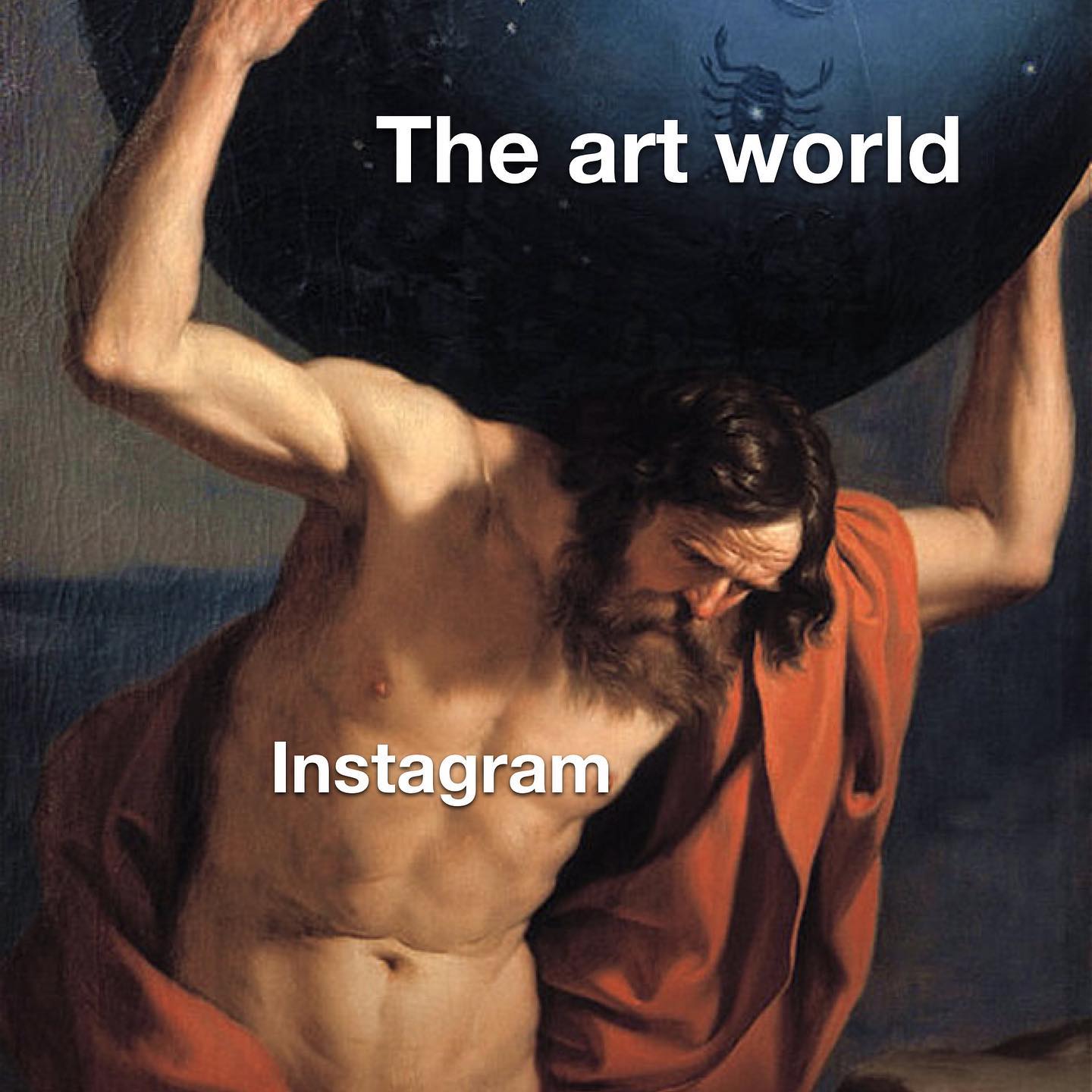 Instagram was born as a photo-sharing platform in 2010, what used to be an app full of selfies with a vintage-look filter and a caption saying #instafun has rapidly become an interconnected community of its own, with its particular rules and languages. In the art world, Instagram has completely revolutionized the industry. There were times when it was beyond belief to directly talk to artists or even visit their studios. Now with just a touch of a button anyone can send a DM, and it is even common for them to share their creative process and place of creation.

This fast evolutive process brought on by new platforms and the internet has also been marked by the so-called internet-culture, and there is nothing more distinctive of cyberculture on Instagram than memes.

The art world has not been let off the hook with this Gen-Z type of communication, and with the necessity of raising a voice on the uncertainty and alienation of the industry through a satirical lens is how @freeze_magazine was born.

Cem A is the pseudonym he uses to maintain anonymity, the @freeze_magazine account was opened in 2019 and since then it has grown to 140k followers. Artists, gallerists, art students, gallerists and art fairs are the target of the memes he creates and upload almost daily, in which surviving the art world is the main focus.

His fast growing meme account has allowed him to connect with the art community and further develop his profile as an artist and curator, hence participating in Documenta Fifteen and inaugurating a recent exhibition called “Pleased to announce…” in the gallery Versus Art Project in Istanbul. In which he “invites the visitor to question the nature of the language utilized by art organizations to describe exhibitions and artworks to the public in supposedly inclusive, informative and accessible ways”.

We are then pleased to announce… this interview to Cem A. aka @freeze_magazine about his meme account, his exhibition and hopes for the art world.

Tell me about Cem A. and @freeze_magazine, is it two different personas?

We are obviously the same person, but there are some differences. With the name of the account, it was a very split-second decision, I could have never imagined that it would turn into what it is now so to this day I only associate it with it as a platform. And Cem A. is a pseudonym for my work as an artist and in exhibitions.

The account of @freeze_magazine didn’t have much aim at the beginning; it was a way of procrastination basically. Now looking back I see that it coincided with me finishing my degree and trying to look for a job in the art world and the difficulties within this, which later met with the pandemic which is when it really went off and grew a lot. During this time I also started doing exhibitions around memes and writing critique pieces for organizations like Documenta Fifteen.

When you opened the account, did you feel the necessity of creating this platform to rant about the art world?

It definitely did not start with the goal of being a platform or even being serious. But obviously now I am very interested in using it to collaborate with others and give voice to address the current issues.

Have you seen effectiveness when ranting about certain topics through memes?

Firstly, I never want to make a meme that is insulting and just want to focus on “silly” ways of making memes with criticism that is constructive. However, recently there was one case which I am not 100% sure if it happened, but people told me about it.

I made a meme about the University of Arts in London and the limited space the students had which resulted in them getting more spaces I believe, which actually made me really happy.

With constructive criticism I have the goal of generating a conversation, since I know that generations take it differently, so I never want to criticize someone or something for the sake of it. But it is true that some administrations get angry with the memes instead of trying to get the message and make a change.

Can memes actually be used as institutional criticism?

I am not 100% sure, I believe memes can be described in relation to institutional critique but I am hesitant to call it that. As a more broad way it can be a tool however it is very case-specific, so it depends. When unions in museum use it I think it is a great way to get a message out.

You have recently inaugurated an exhibition called “Pleased to announce…”, could you resume the exhibition in one phrase ?

It was actually born from a meme where people complain about exhibition texts being generic most of the time. So I kind of flipped that idea and thought ‘What if you wrote an exhibition text that was so generic that it could apply to any exhibition?’.

Could you walk us through this exhibition and how it came about?

I asked this main question to friends working in the art field as curators, pr consultants, and critics. All the professions that will actually take part in writing an exhibition text, so they basically reenacted as themselves so we gathered 12 or 15 texts in total, with no mention of artists and gallery so they could be applied to any exhibition. It is complemented by 960 real exhibition texts that cover the whole space as wallpaper, from profit and non profit institutions spaces from all over the world, and then on top of this there are thirty QR codes that take the visitor to individual memes on my page. “Pleased to announce…” at Versus Art Project by Cem A. 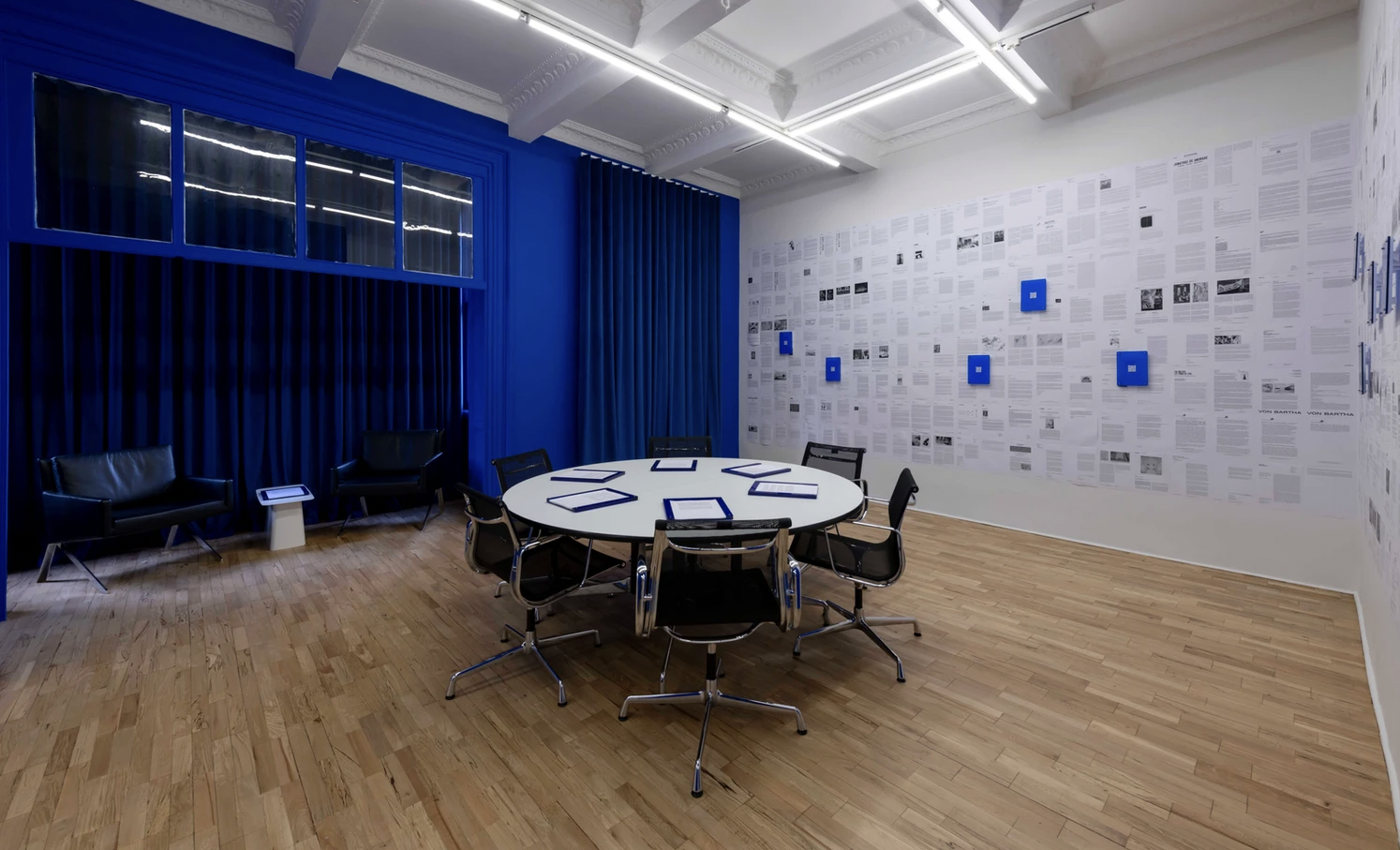 “Pleased to announce…” at Versus Art Project by Cem A.

Why do you consider this topic relevant?

I believe that nobody can deny that these texts are inaccessible, and I find it quite funny and odd that it is such an open secret. This topic has been a recurrent theme throughout my meme account for a while, and leading up to the exhibition I even started to come up with even more.

Do you consider that there is an interest to keep these texts inaccessible or even gatekeep?

I don’t really think so, because if we talk about gatekeeping it suggests that these texts are accessible to at least one group of people. But what I think is funny is that these texts are inaccessible to everyone. So I believe they act more as placeholders than as forms of communication, because no one will question the role of an exhibition text in a show. Since every exhibition is expected to have one.

In the art world everyone is too hesitant to confront each other, which I actually understand. But people prefer to make a non confrontational ambiguous text, rather than make something that is going to question certain topics.

How can exhibition texts improve to be made more accessible?

The biggest mechanism that needs to be changed is how indirect these texts are, it should be okay to be direct about exhibitions. And I believe it should be publicly accepted that an exhibition text directly explains what an artwork is about without limiting people to it.

I think indirectness can be applied in some cases but not in every case, that shouldn’t be seen as the only way of communicating. Because sometimes confusion feeds into elegance.

Finally, how do you hope the art work evolves?

I believe it is quite worrying the relationship between the art market and the welfare of the people who work in art since it is very detached. The art world keeps on growing despite all the uncertainties of the world, and art jobs everyday are more precarious which means that this relationship is evidently flawed.

However, I think there is more consciousness around social welfare in general and I hope that it will have a bigger influence in the art world. Because there is an interesting paradox about being so serious about protecting artworks, restoration of artworks in storage and preservation which are very undoubtedly important to everyone.

But somehow, this does not seem as equally applicable to people who work in those same institutions who are also part of this.

Hopefully, it gets better…